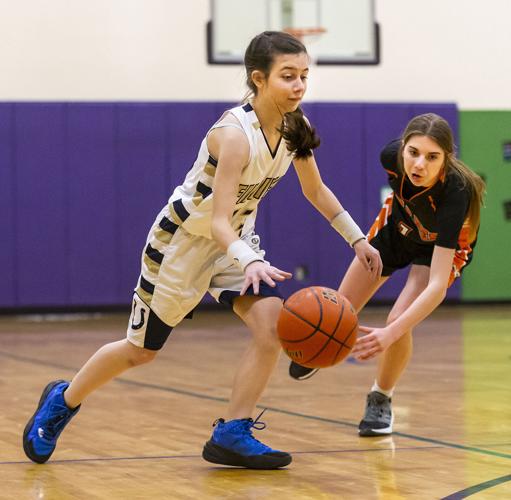 Tiegan Blain drives the ball against a Powell opponent at Livingston School on Friday, Feb. 18th.

Tiegan Blain drives the ball against a Powell opponent at Livingston School on Friday, Feb. 18th.

The Cody freshman girls basketball team logged plenty of minutes on the court this season, finishing with a record of 6-3 and relying on that tenacious Filly defense and full-court pressure to score some big program wins.

“Just due to numbers, our girls were playing freshman games, froshmore games and also JV games,” coach Sam Buck said. “I think it gave them so many good opportunities to gain valuable game experience.”

All of that floor time paid off in a big win over cross-county rival Powell in their second matchup of the year.

After falling to the Lady Panthers the first time the two teams met, the Fillies rebounded to get the win in round two.

“To me that was a testament to the hard work they were willing to put in and willingness to buy into the system,” Buck said. “That was one of the best examples of their growth.”

All of the minutes challenged the team physically and mentally and brought out some of the hustle, effort, toughness and grit that came to define the group.

“Those are some of the main characteristics we value in the program and want the kids to hang their hats on,” Buck said. “I think as the season went on they realized how to use those strengths within the system and also really improve on their fundamental skills.”

When the Fillies got the defense rolling it tended to reflect on the scoreboard as the offense fed off the energy.

“When we were able to play connected and apply full court pressure and get some turnovers, that led to easy offense and transition opportunities,” Buck said. “Our defense was what usually got us going.”

The Fillies expanded their offensive repertoire as well, pounding the ball inside and attacking the basket which led to a little more scoring efficiency.

“These were things we started to really do as the season went along,” Buck said. “This was such a progression from the beginning of the year to the end and so much fun to see their growth and success.”

“This is a pretty good group of players that will hopefully continue to improve and be able to add valuable depth to the program and compete for time on the upper levels,” Buck said.