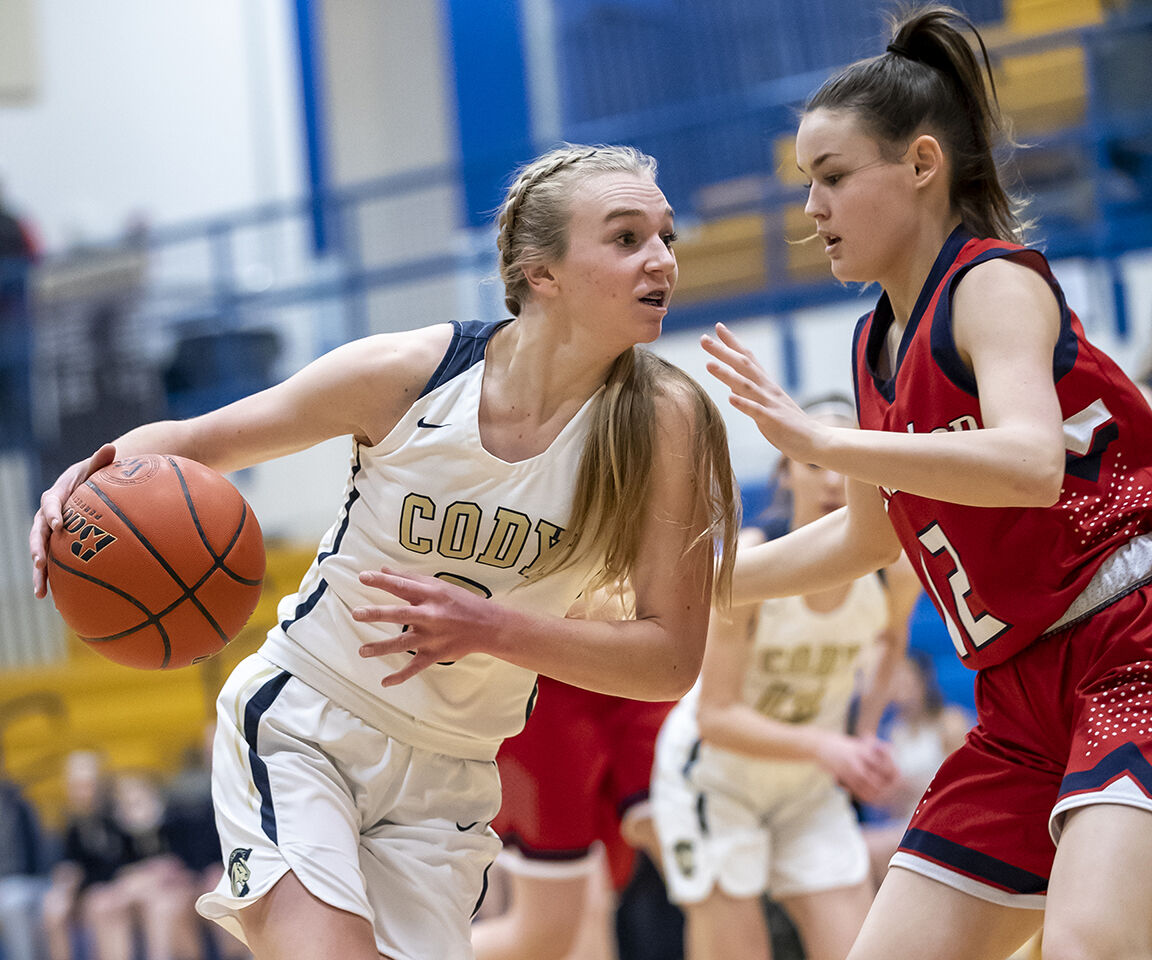 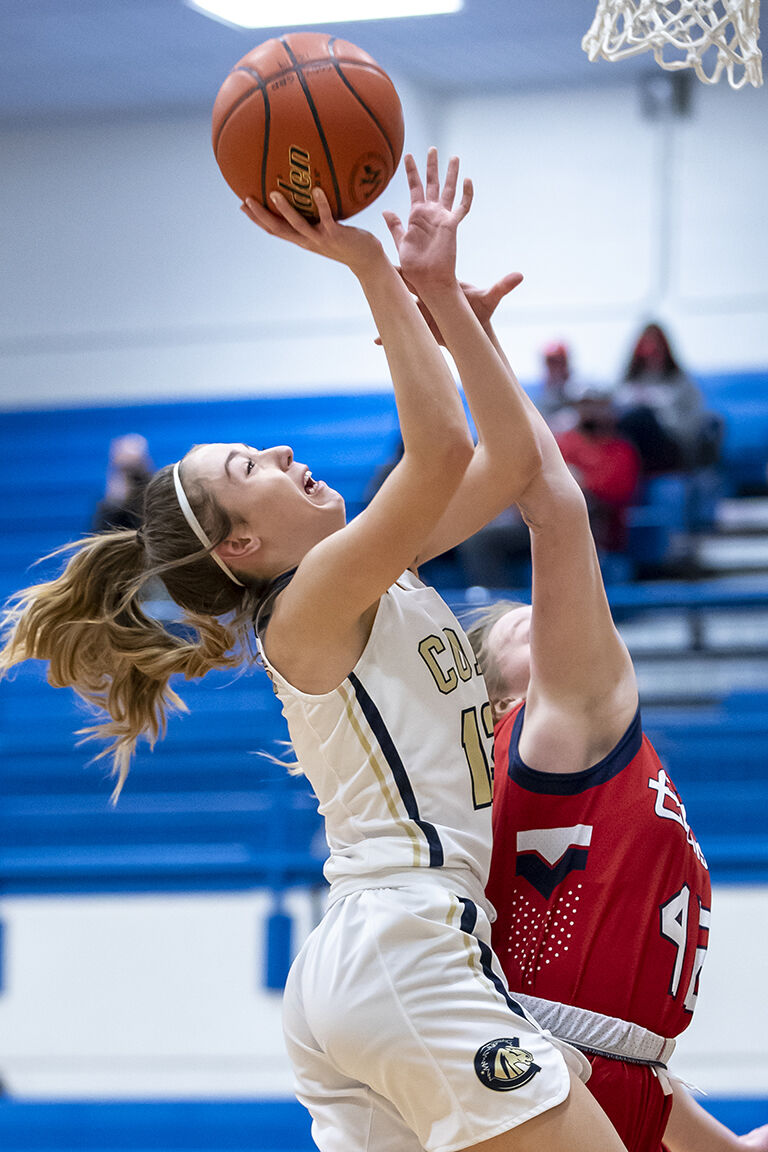 Kennedi Niemann rises for a layup over an Evanston defender.

Kennedi Niemann rises for a layup over an Evanston defender.

Once again, the Cody girls basketball team showed it can play with the best.

The No. 5 Fillies held off No. 4 Green River 46-40 on Saturday at Sweitzer Gym, a day after cruising to a 58-28 victory against Evanston on a two-game home stretch.

On Friday, Cody (12-3, 2-1) will get a second chance at the second-best team in 4A when the Fillies travel to Natrona County (12-2, 3-0). After Saturday’s win, coach Chris Wagner said the Fillies are ready for the rematch.

“It shows our progress – we played a really good game,” he said. “It’s our second round with the conference teams, so we’ll go back to the Natrona game, find things they hurt us really bad with and work on it.”

He said they’ve already improved on some of that and he expects to see more zone defenses against them after Cody proved it can beat a man defense used against them by both the Lady Mustangs and Lady Wolves, who came close to taking down Cody.

Cody held off the No. 4 team in 4A after taking a late lead in a game of short runs and a close score throughout, where it used its depth to top one of 4A’s top players.

Green River’s Kayde Strauss (she went into the game third in the conference in scoring average) led all scorers with 17 points and Wagner said they keyed in on her from the get-go, playing more help defense later as Strauss made a push in the fourth quarter. Cody was caught by her drives late in the first quarter after a slow start.

With two of 4A’s top defenses going at it, neither team could get much offense going throughout most of the first quarter. With 3:49 remaining, Ally Boysen sank a pair of free throws to make  it 6-6, but the Lady Wolves (9-4, 3-0) owned the final two minutes, finishing on a 6-0 run to take a 12-6 lead after one, with senior Strauss scoring eight of Green River’s 12.

Radakovich kept Cody close in the second quarter, opening it with a quick jump shot and scoring six of the Fillies first eight points of the quarter. She brought Cody within three at 17-14 with a turnaround jumper in the face of a defender. Kennedi Niemann followed that up with a spin on a fast break drive later in the quarter as the teams traded baskets, with Green River taking a 23-18 lead at the half.

Cody clawed its way back in the third quarter, tying the game at 24 on a pair of free throws by Boysen and going ahead when Kennedi Niemann took a pass from Torrie Schutzman on a fast break, weaved around Strauss and sank a layup for a 26-24 lead. The teams traded baskets, but the Lady Wolves took the last two, going ahead 32-30 after three.

Green River led 35-32 midway through the fourth on a trey by Strauss, then Hays made a key impact. She hit one of two free throws on a drive attempt to tie the game at 35. Then, with Reece Niemann providing a screen, took the lead for good on a drive to the basket to go ahead 37-35. Cody secured the win with a bevy of free throws. Green River made it interesting, with Strauss hitting a late trey and turning an eight-point Cody lead with one minute left into a last-second affair, with Reece Niemann icing the win with 3 seconds left with a pair of free throws.

“I think we were all really excited for the game,” Reece Niemann said. “I felt like everyone pitched in, everyone played a role.”

Cody has been tough on the defensive end all season. In the last two games the offense has played a starring role, as the Fillies had two players in double-figures en route to a win against Evanston (2-12) on Friday.

“I think I’m getting more confident in my shooting,” Schutzman said. “I’m focusing on my next shot and not the last one, whether I made it or not, and focusing on my feet in the right position.”

From the get-go Cody faced a team that tried to do on defense what the Fillies have done better than anyone in 4A this season using a full-court press. Neither team could score much early, but the Fillies broke it open midway through the first on a 3-pointer by Hays off a cross-court pass from Kennedi Niemann to make it 7-2. Along with Schutzman, who scored Cody’s first four points, Hays powered the offense with seven points in the opening quarter, capping it off with a drive to make it 15-4 late. After an Evanston trey and two free throws by Reece Niemann later, Cody led 17-8 after one.

Cody kept it up in the second quarter, outscoring Evanston 14-2 on a run that ended with another pair of Reece Niemann free throws to make it 31-10 with 2:43 left in the half. Schutzman opened the quarter with a 3-pointer and converted an old-fashioned trey for 11 first-half points. Guards Hays and Kennedi Niemann led a defense that caused numerous turnovers, but the Lady Red Devils did manage to score the final four points of the quarter on three consecutive trips to the line.

Cody turned a lead into a rout in the third with Kennedi Niemann keeping up her long fast-break passes, hitting Radakovich in stride for a pair of fast break layups early, one a three-point play.

“When I can trust that I can run as fast as I can and she’ll get the ball to me, it’s dynamic,” Radakovich said.

Niemann then found Schutzman for yet another trey. Schutzman followed that up with one more on a pass from Hays for 17 points in the game and a 44-17 lead. With a 3-pointer by Reece Niemann on a pass outside from Ally Boysen, Cody led 51-22 after three.

The Fillies had the luxury of providing more court time for the bench players in the fourth quarter, with Ava Meier finishing a drive with a layup and Jessa Lynn sinking a late trey.

Cody thrives offensively on its ability to spread the scoring around. Saturday, no Filly scored double digits, yet they outscored one of 4A’s top teams, relying on depth.