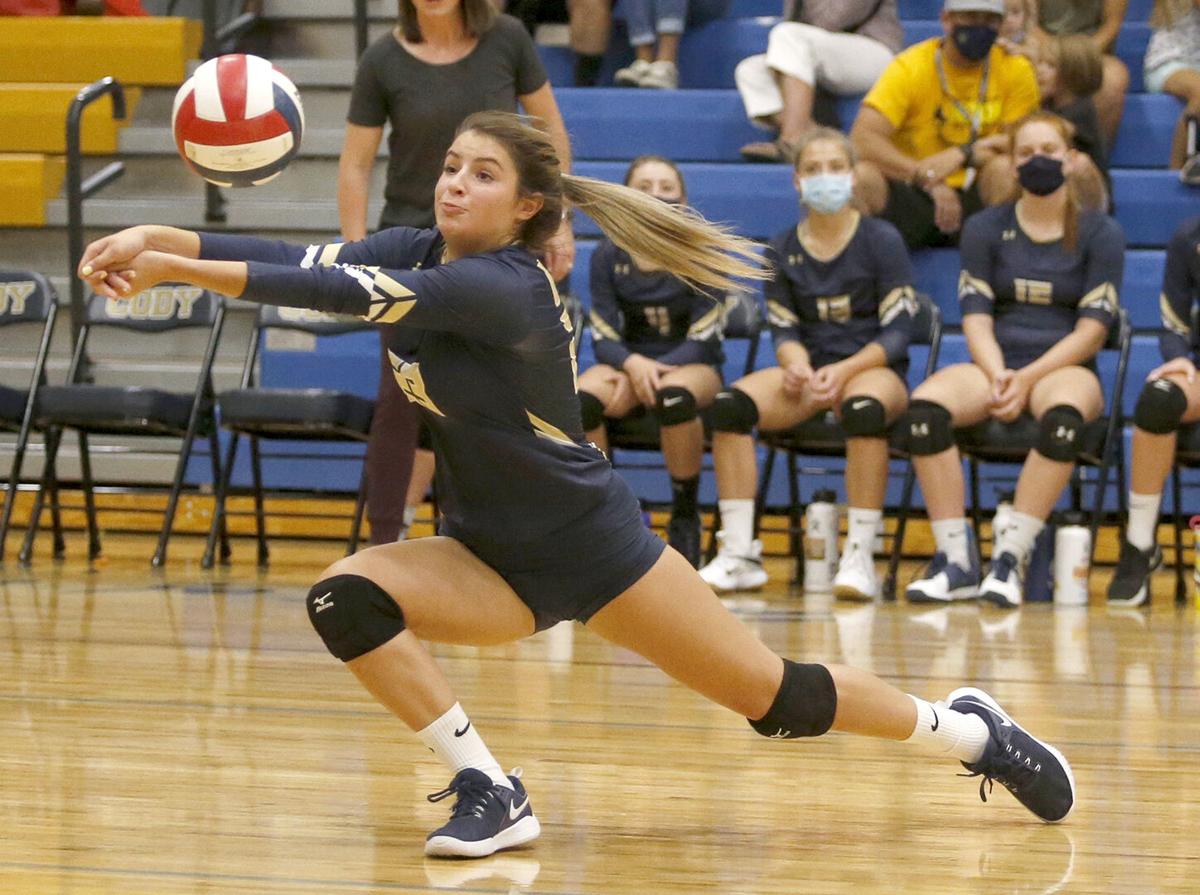 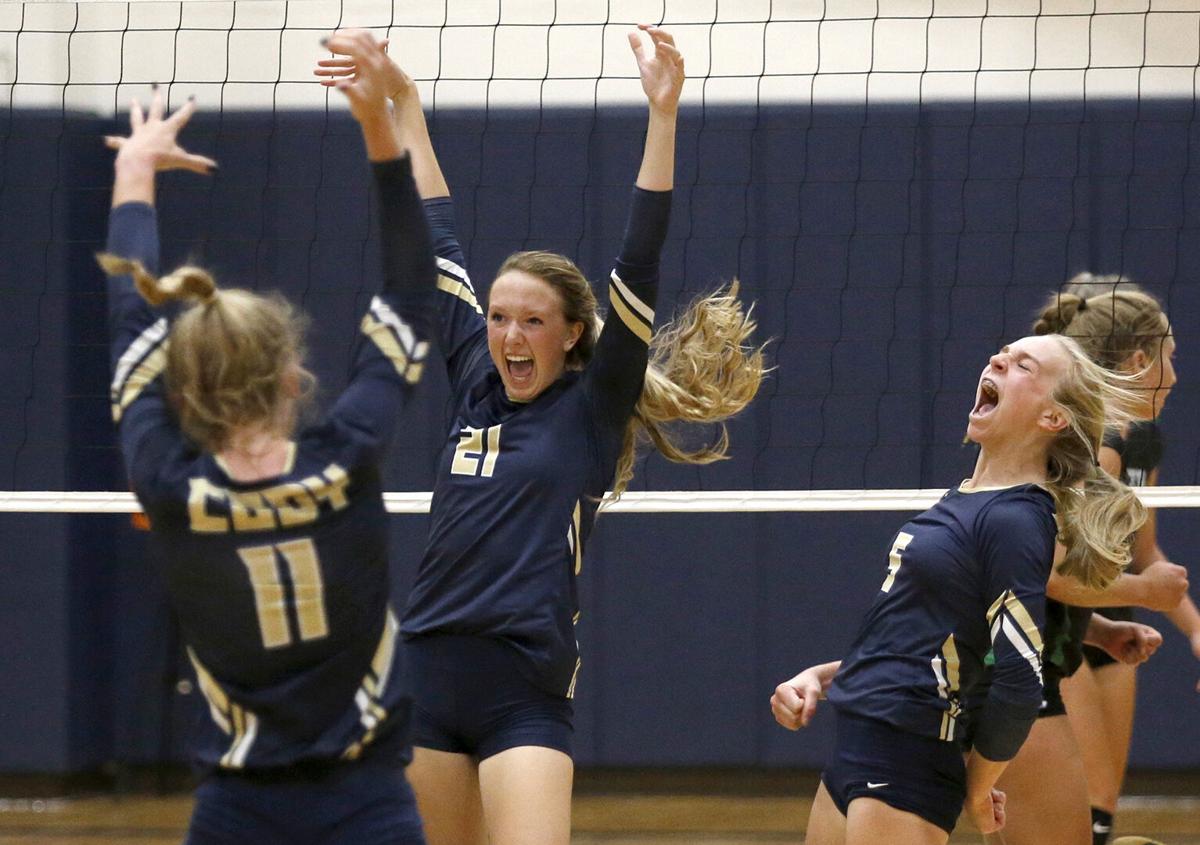 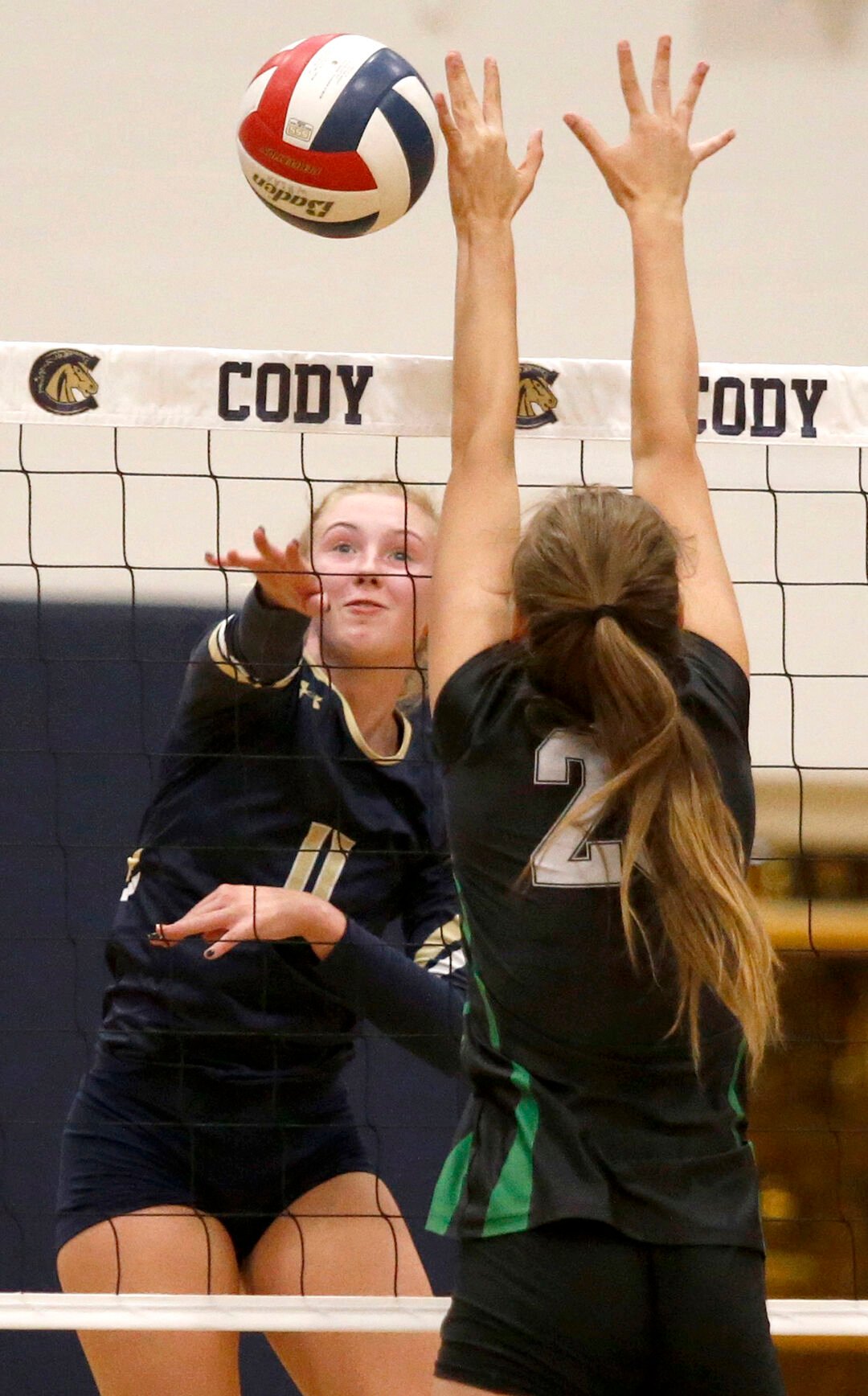 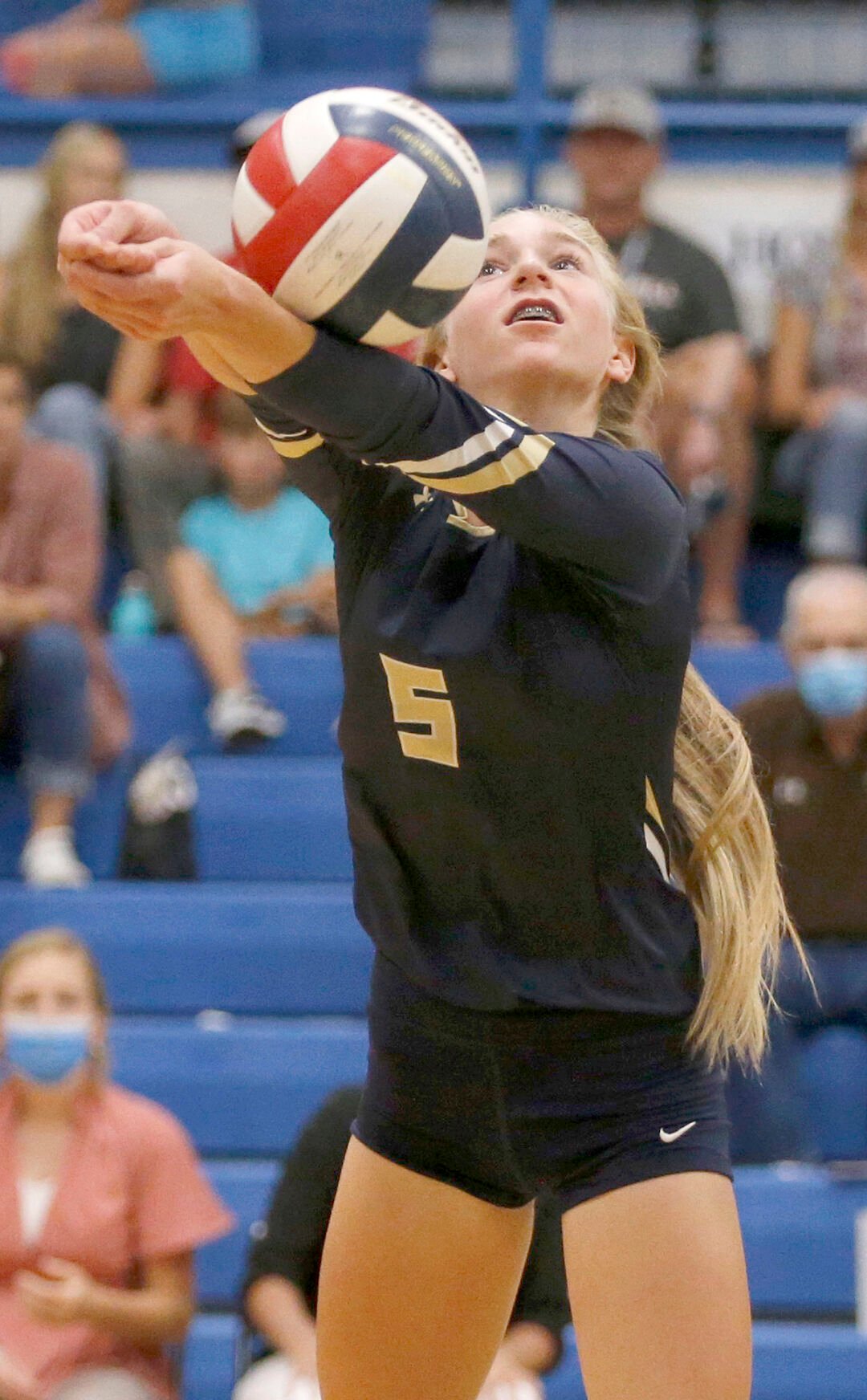 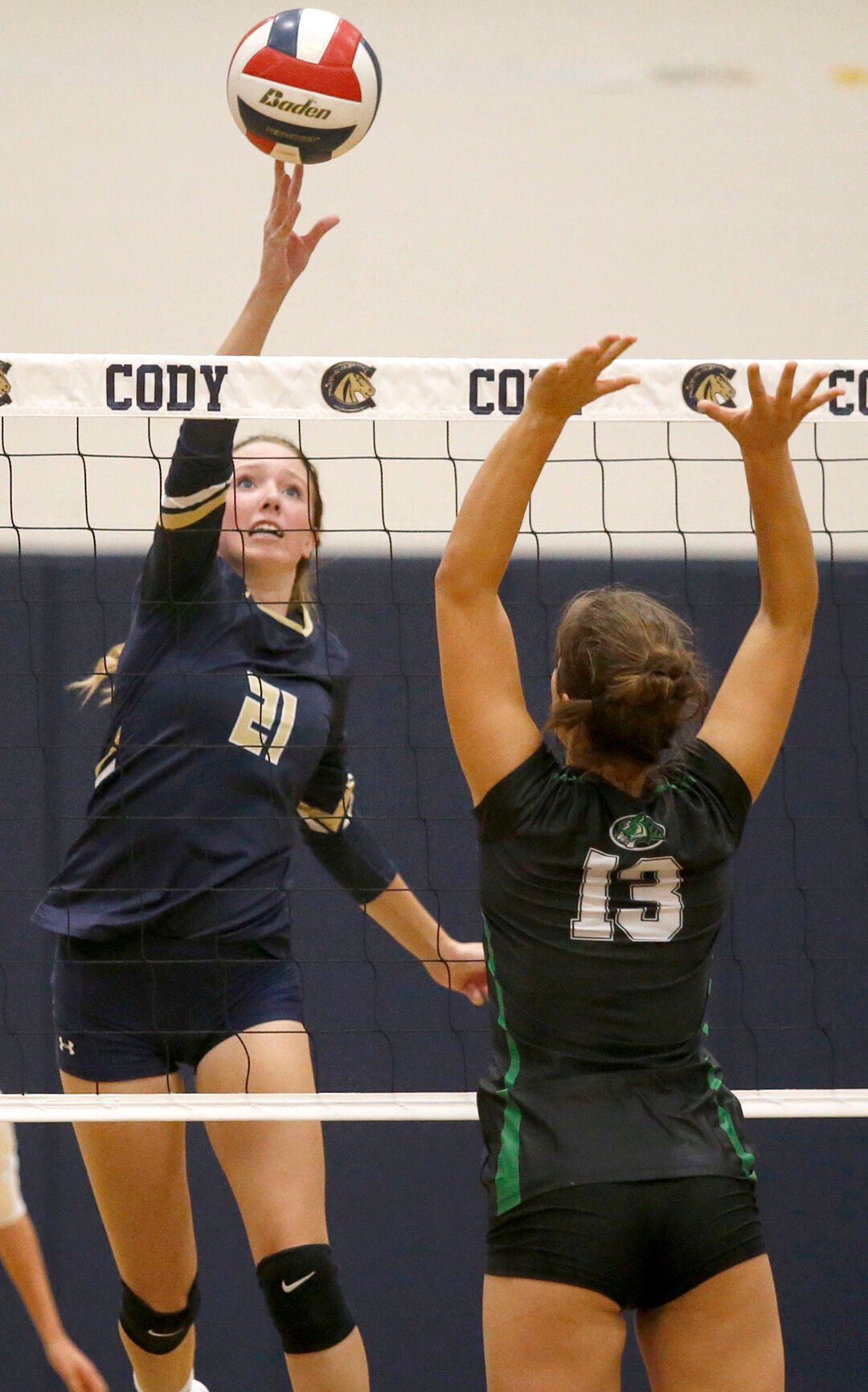 Reece Niemann tips the ball over a Lander player. 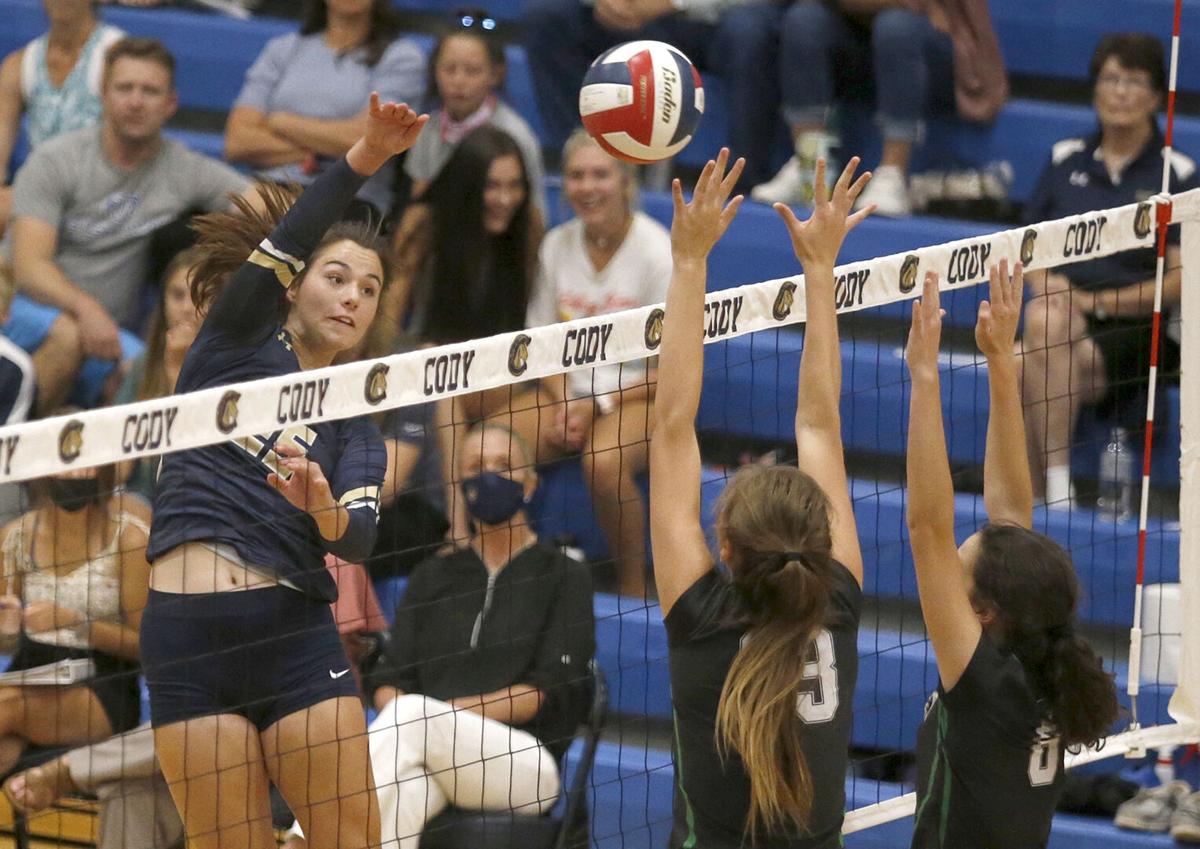 Autumn Wilson goes for a kill against Lander. 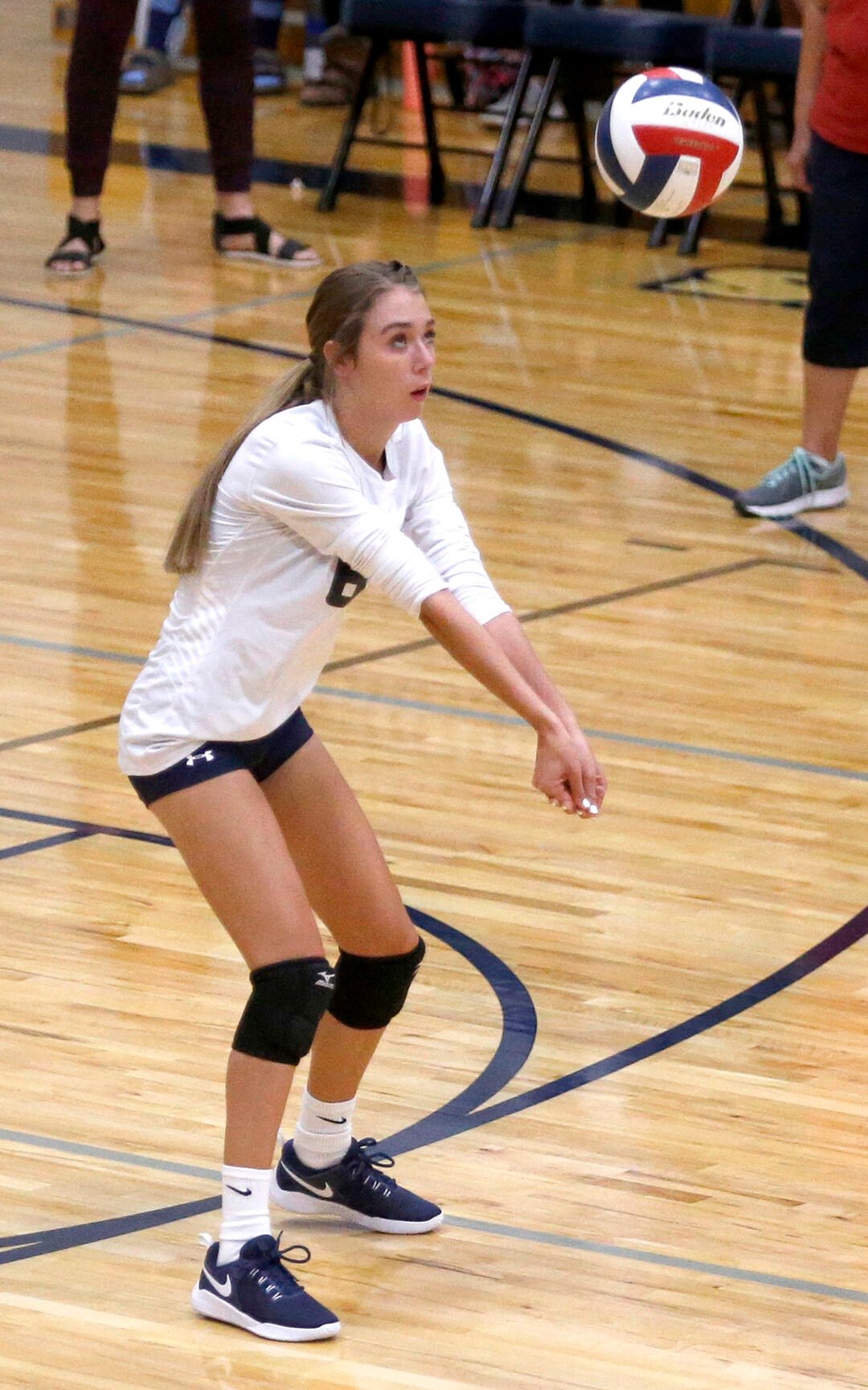 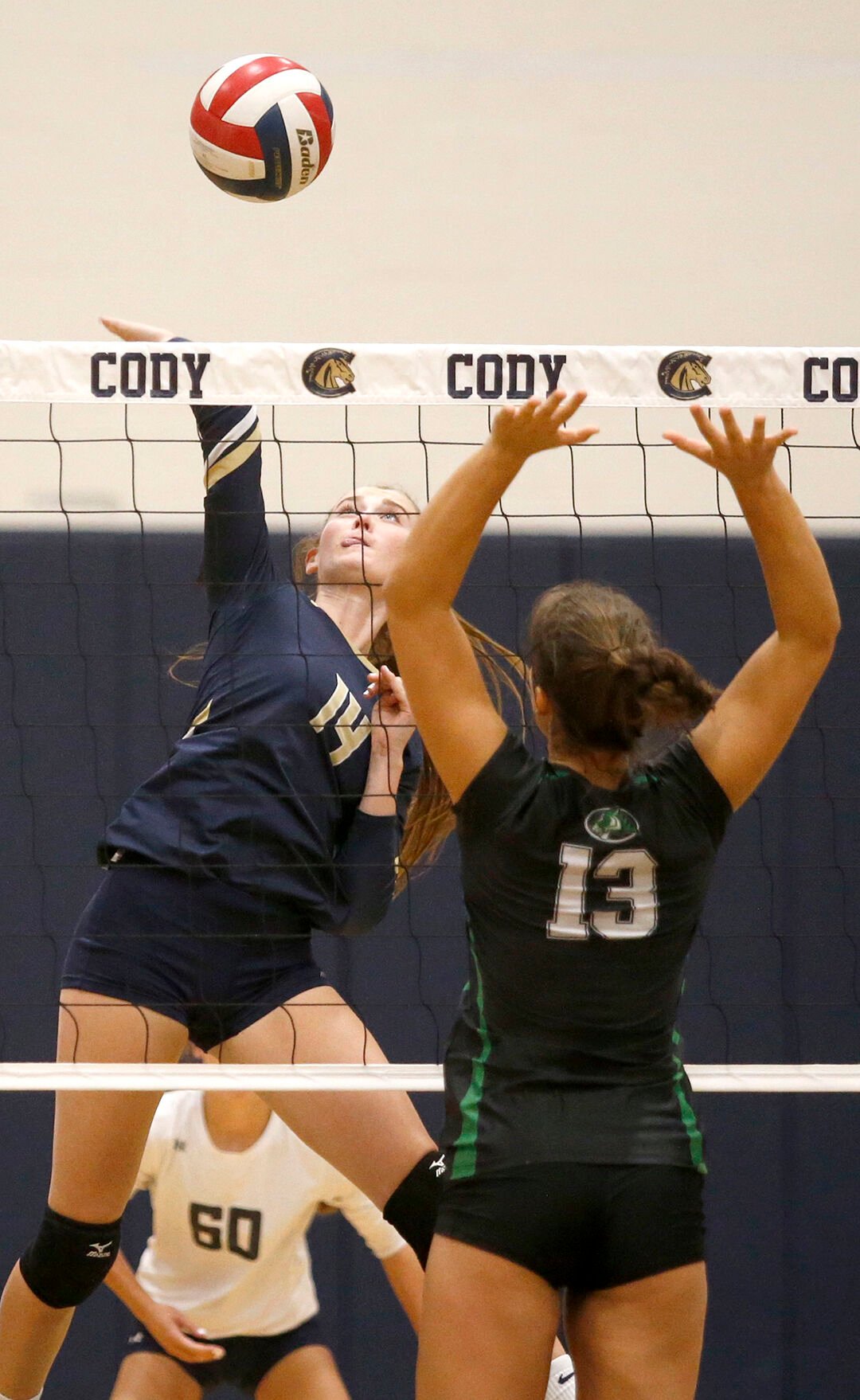 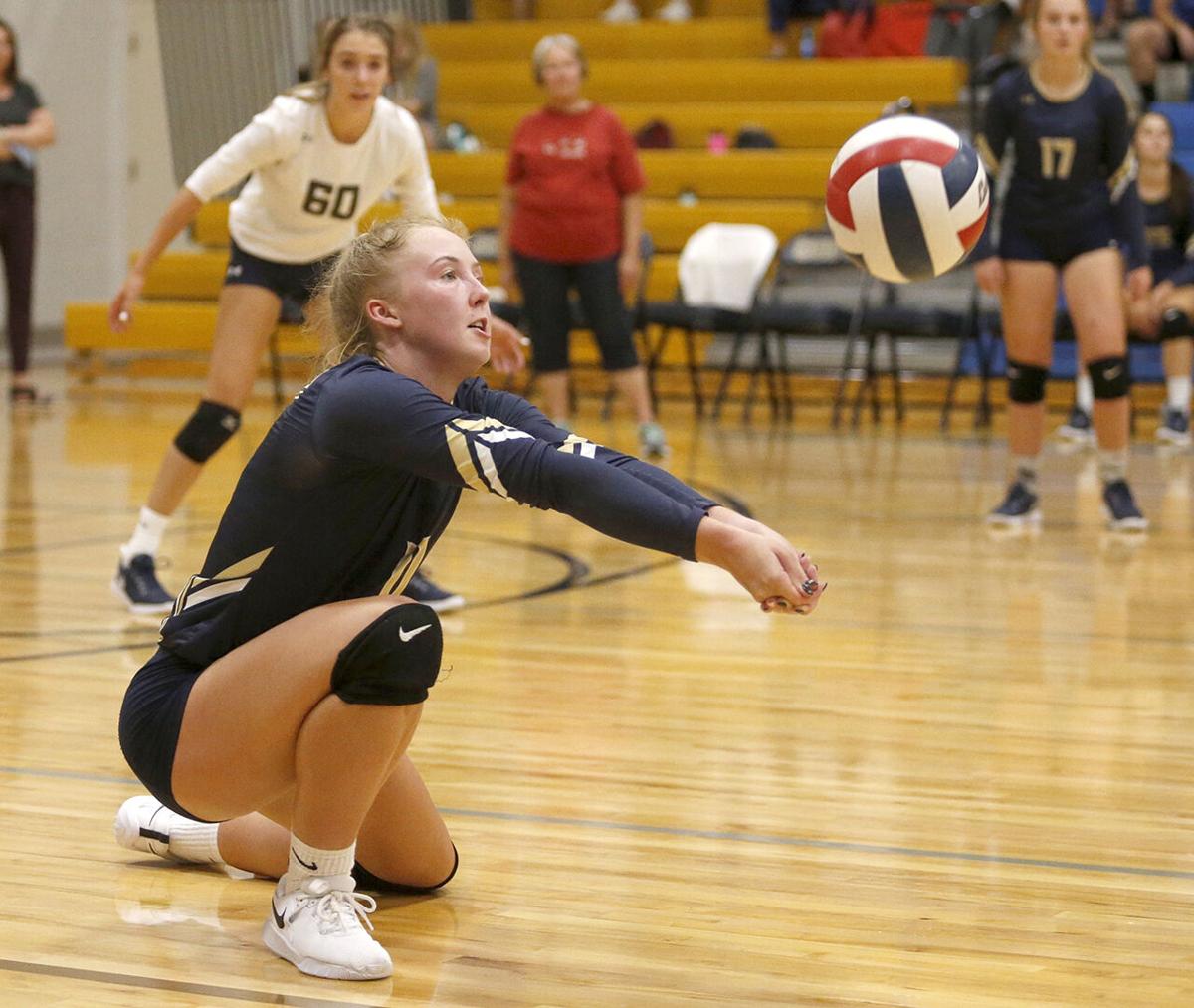 The Fillies celebrate after winning the second set. 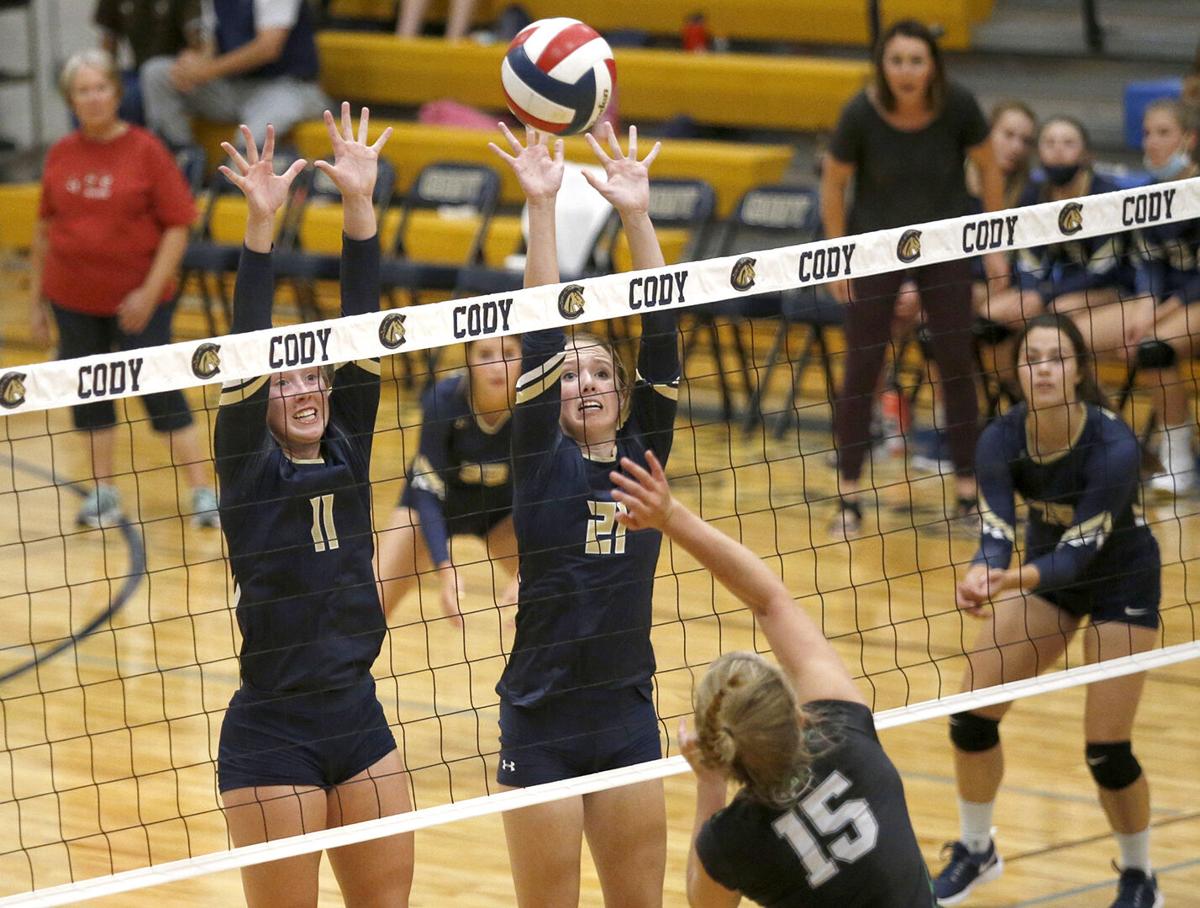 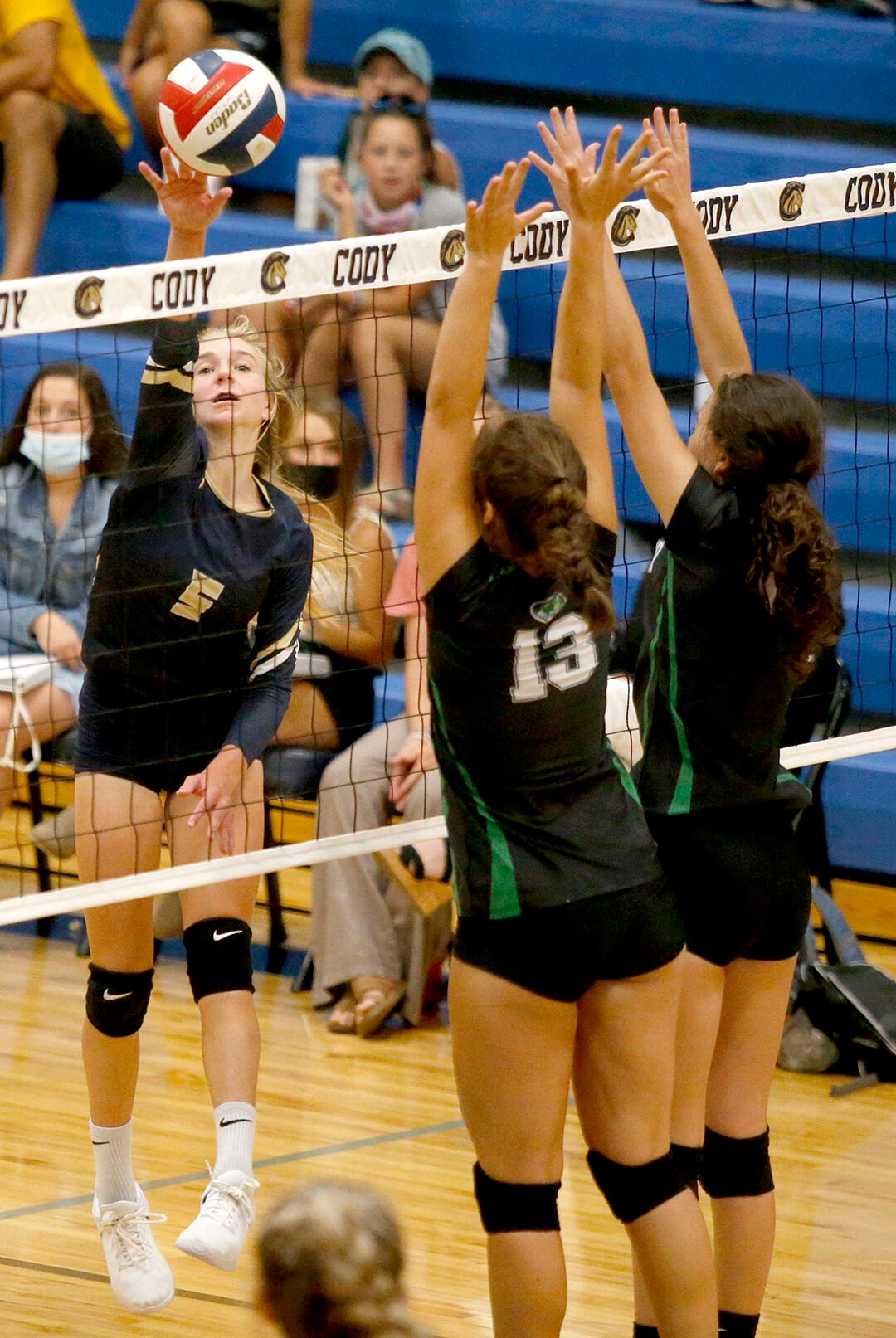 Reece Niemann tips the ball over a Lander player.

Autumn Wilson goes for a kill against Lander.

The Fillies celebrate after winning the second set.

The Cody volleyball team got off to a strong start Saturday against Lander, but struggled late and lost 3-2.

The Fillies started where they left off Friday against Shoshoni in their first set Saturday, quickly taking a 6-1 lead.

“We started with a lot of energy,” Kennedi said. “We wanted to win and came out with a mission.”

Lander pulled within two but a kill by Reece and tip by Bower made it 9-5.

Cody managed to stay a few points ahead of the Lady Tigers through the middle part of the set, before a 5-2 run gave the team a 20-13 lead. The Fillies continued to pull away after kills by Bower, and a kill by Molly Hays gave Cody the 25-18 win.

“We were doing everything well at the start,” Birch said. “We were communicating, passing and hitting well.”

The Fillies started a little slow in the second set, trailing 5-0. A run that included kills by Wilson, Hays and Reece tied the game at 5. This time, Lander held the slight edge through the middle of the set and led 20-15. A tip by Shaffer, kill by Harrison and push by Bower helped close the gap to three. Cody tied the game at 22 but then Lander scored two for its first game-point opportunity. Wilson earned a key kill and then Reece had a big block to tie the game at 24. The Fillies scored the final two points, with a kill by Wilson ending the game at 26-24.

“We had to work hard,” Kennedi said. “We knew what we needed to do.”

Solid serving by Lander in the third set disrupted the Filly offense as the Lady Tigers quickly took an 8-3 lead. Cody’s struggles continued as Lander went up 13-5.

“They served tough that game and we weren’t working as a team as much,” Kennedi said. “We need to come together in those situations.”

The Fillies trailed by as many as 10 during the game, but managed to close the gap to four. Unforced errors hurt the Fillies late in the match though as Lander took a 25-19 win.

“They served us short and long but many points came off our errors on hitting and our struggles to keep the ball in play,” Birch said. “We let some easy balls drop.”

The fourth set was closer, with multiple ties early on and the last one coming at 14 all. Then Lander went on a 6-1 run to pull away. Cody got as close as three but the Lander Tigers tied the match by winning 25-21.

In the final set, hitting and a few uncharacteristic serving errors proved too much for the Fillies to overcome. Early in the match Cody had the lead, with kills by Wilson and Reece and an ace by Kennedi making it 6-3. Lander scored the next three to tie it though and went up 10-7. An ace by Reece made it 11-10 Lander, but the Lady Tigers scored the next four points, with the final three coming on Cody hitting errors to win 15-10.

“We need to learn when you make a mistake to not let it grow and just brush it off,” Birch said. “We struggled with that.”