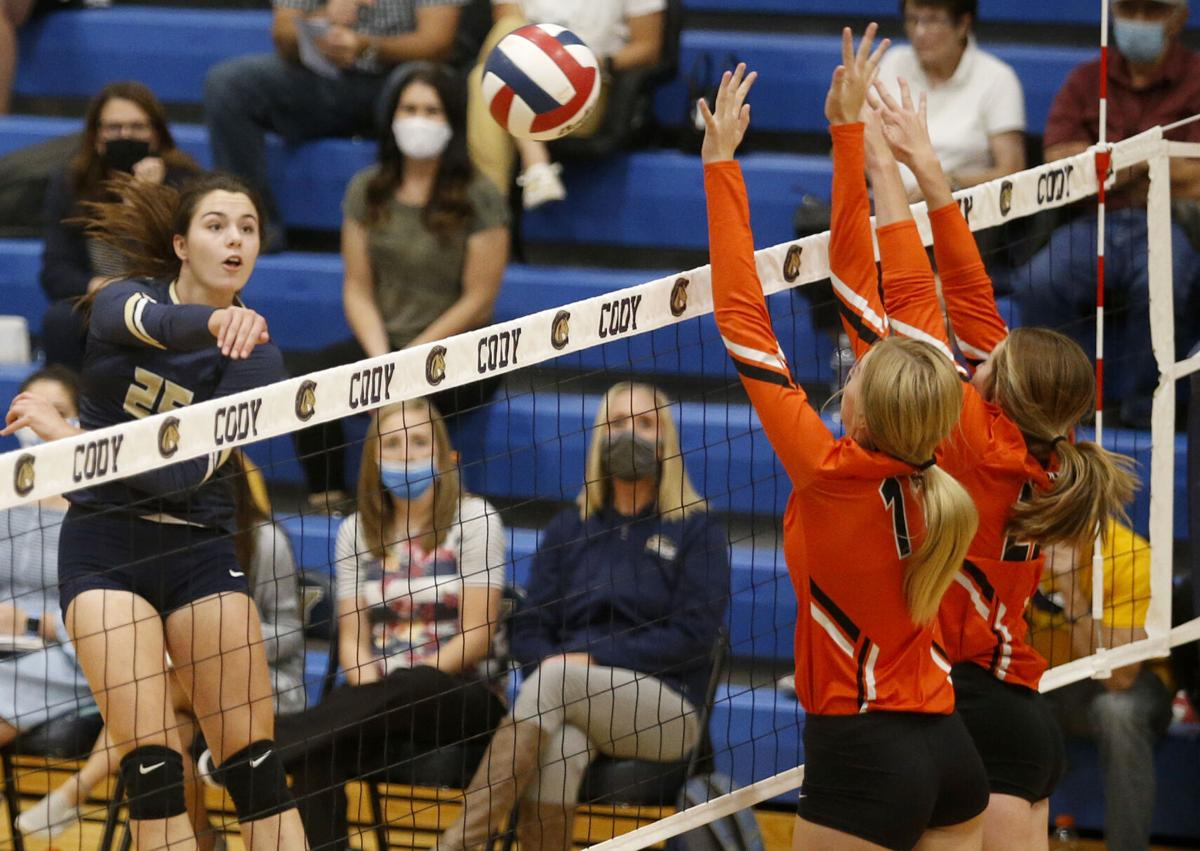 Autumn Wilson goes for a kill against Powell. 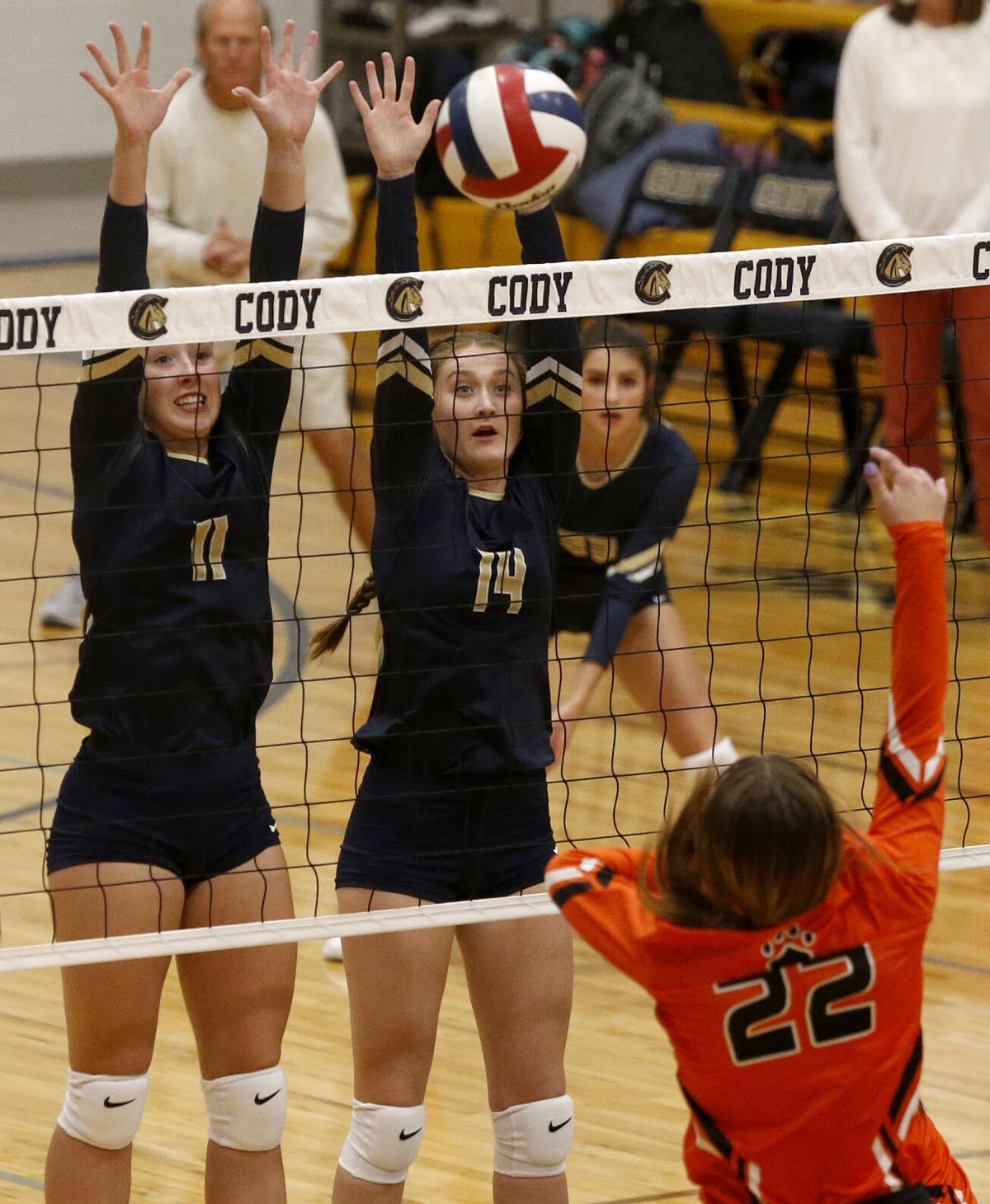 Grace Shaffer (left) and Lake Harrison go for a block against Powell’s Kenzie Ratliff on Tuesday in Sweitzer Gym. 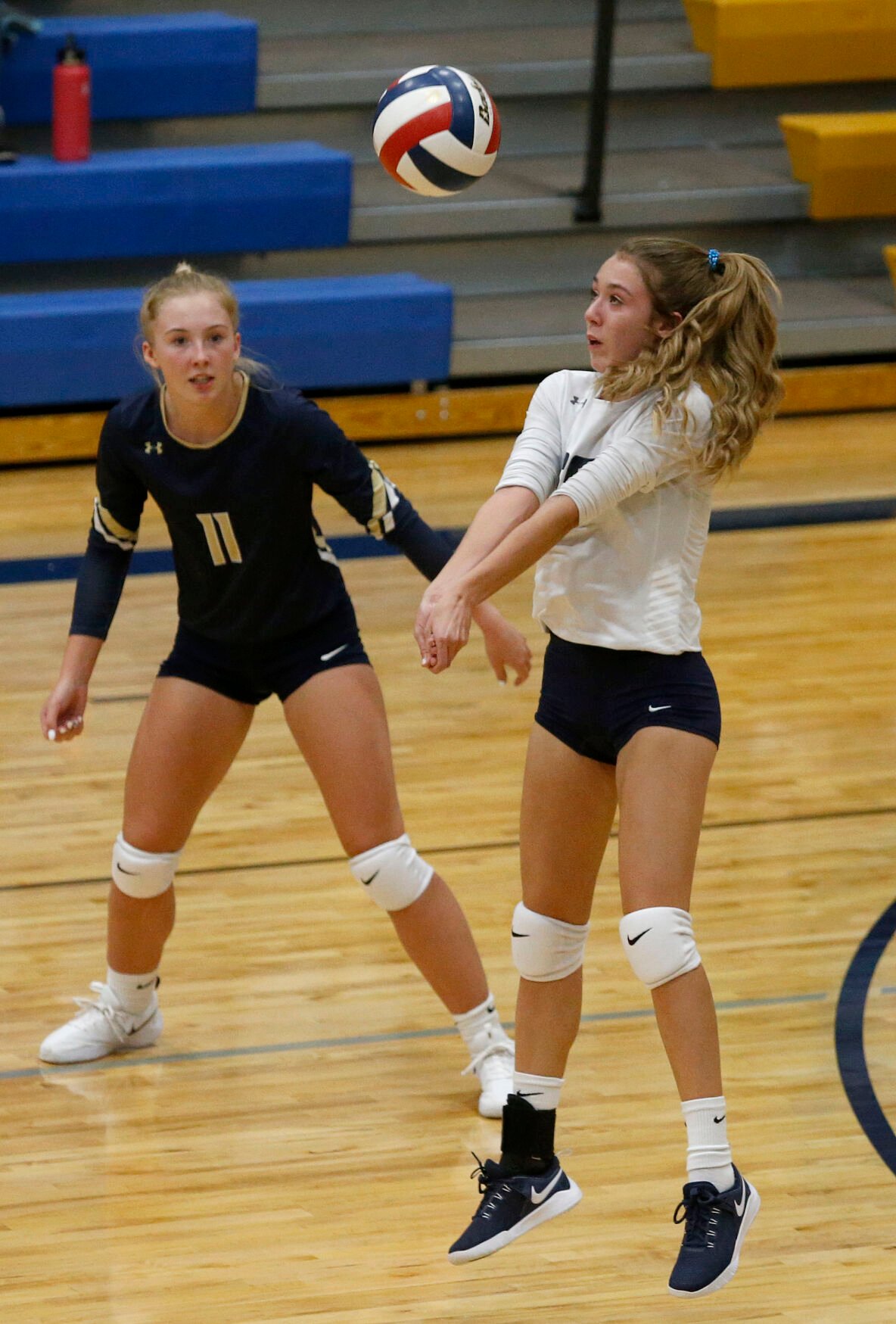 Kennedi Niemann passes the ball while Grace Shaffer looks on. 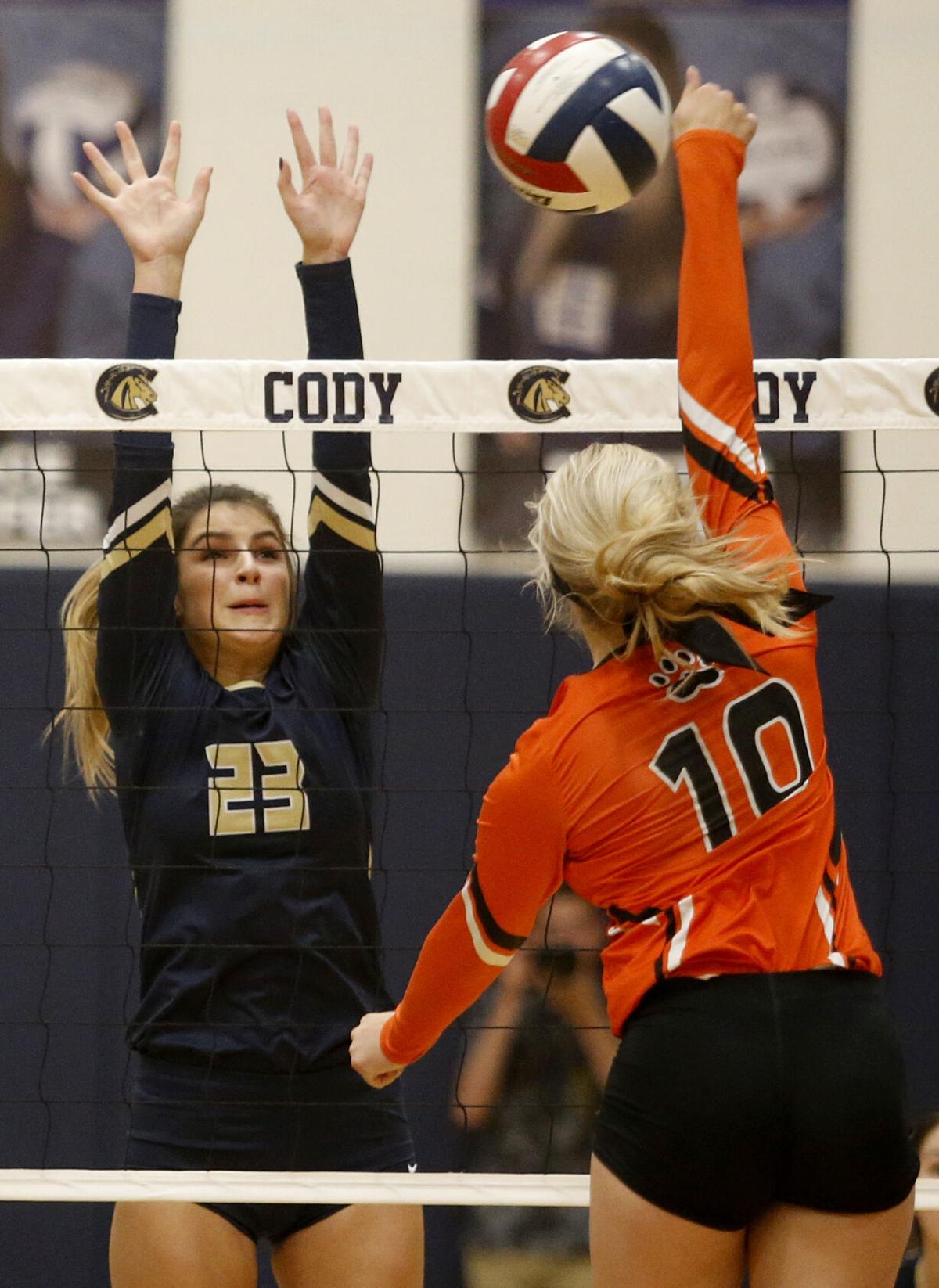 Brittan Bower goes up to block. 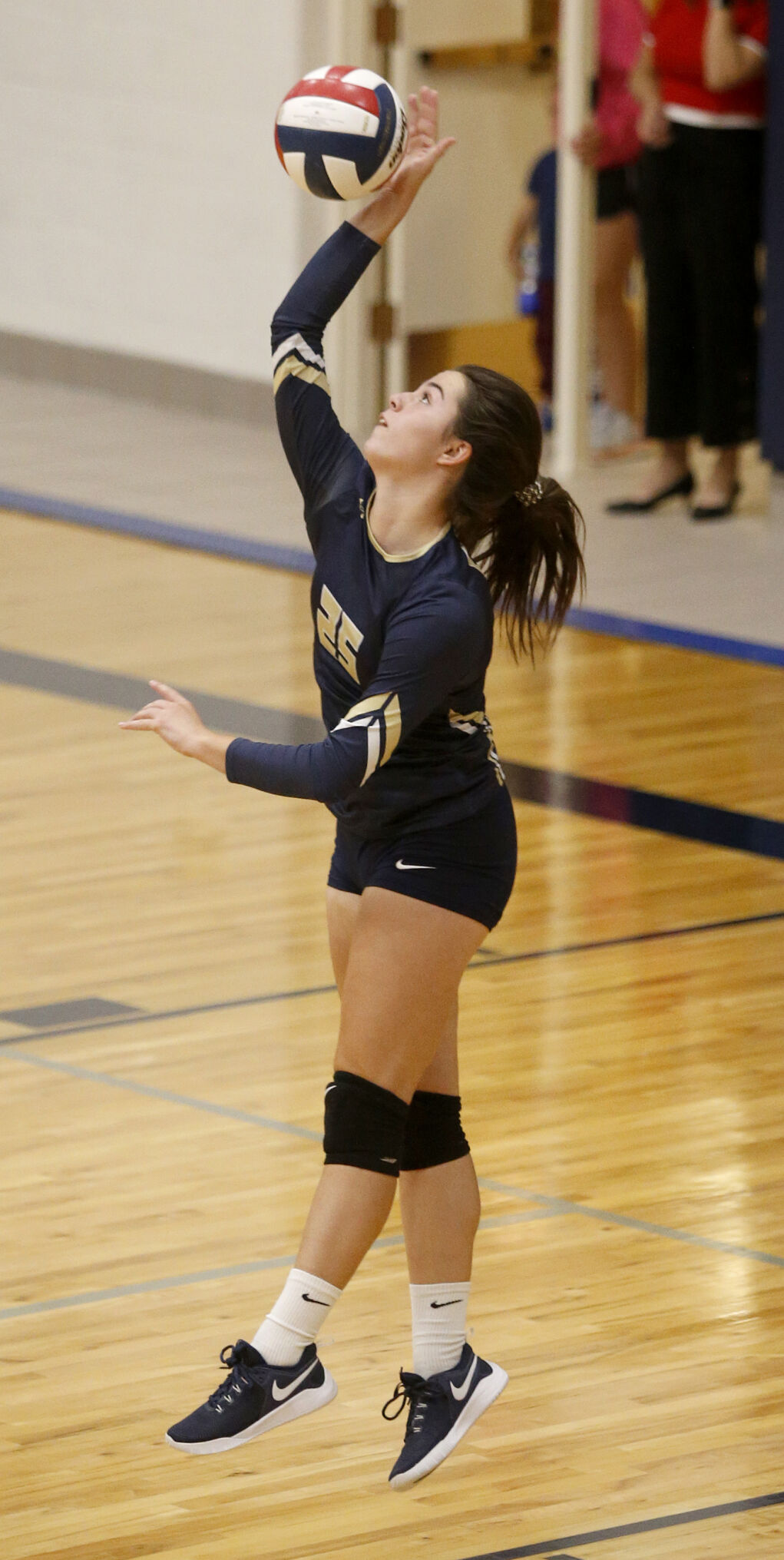 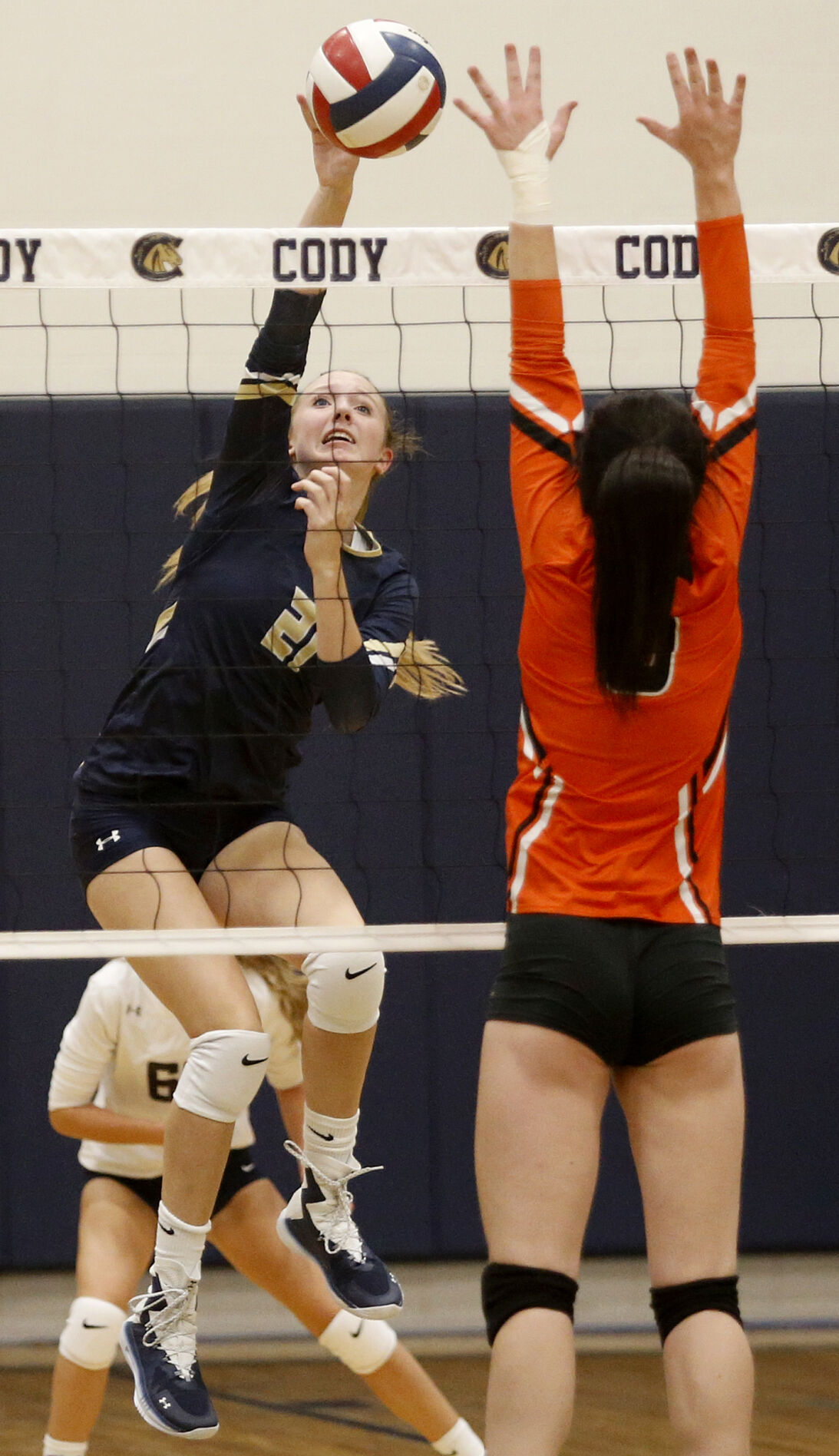 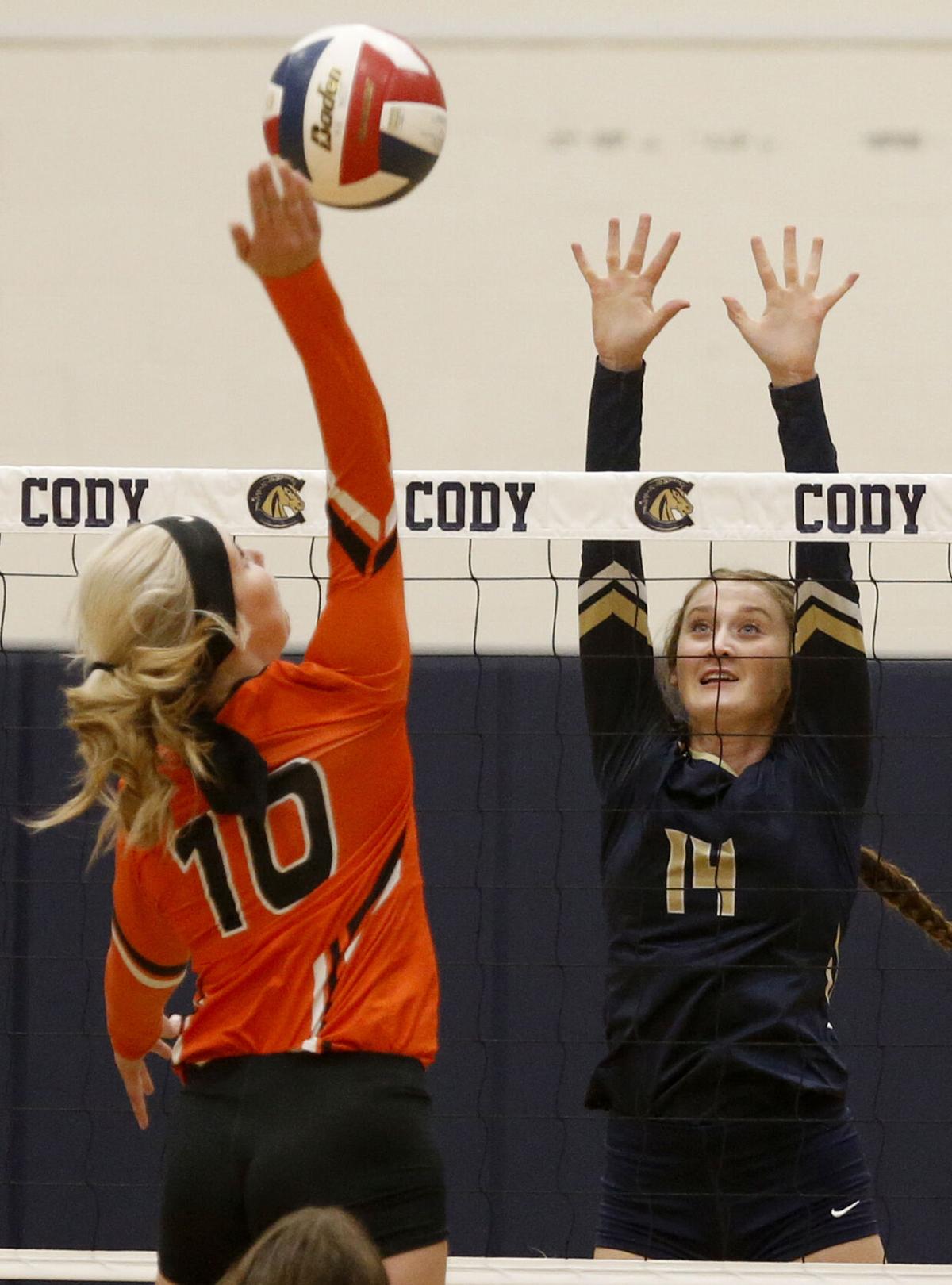 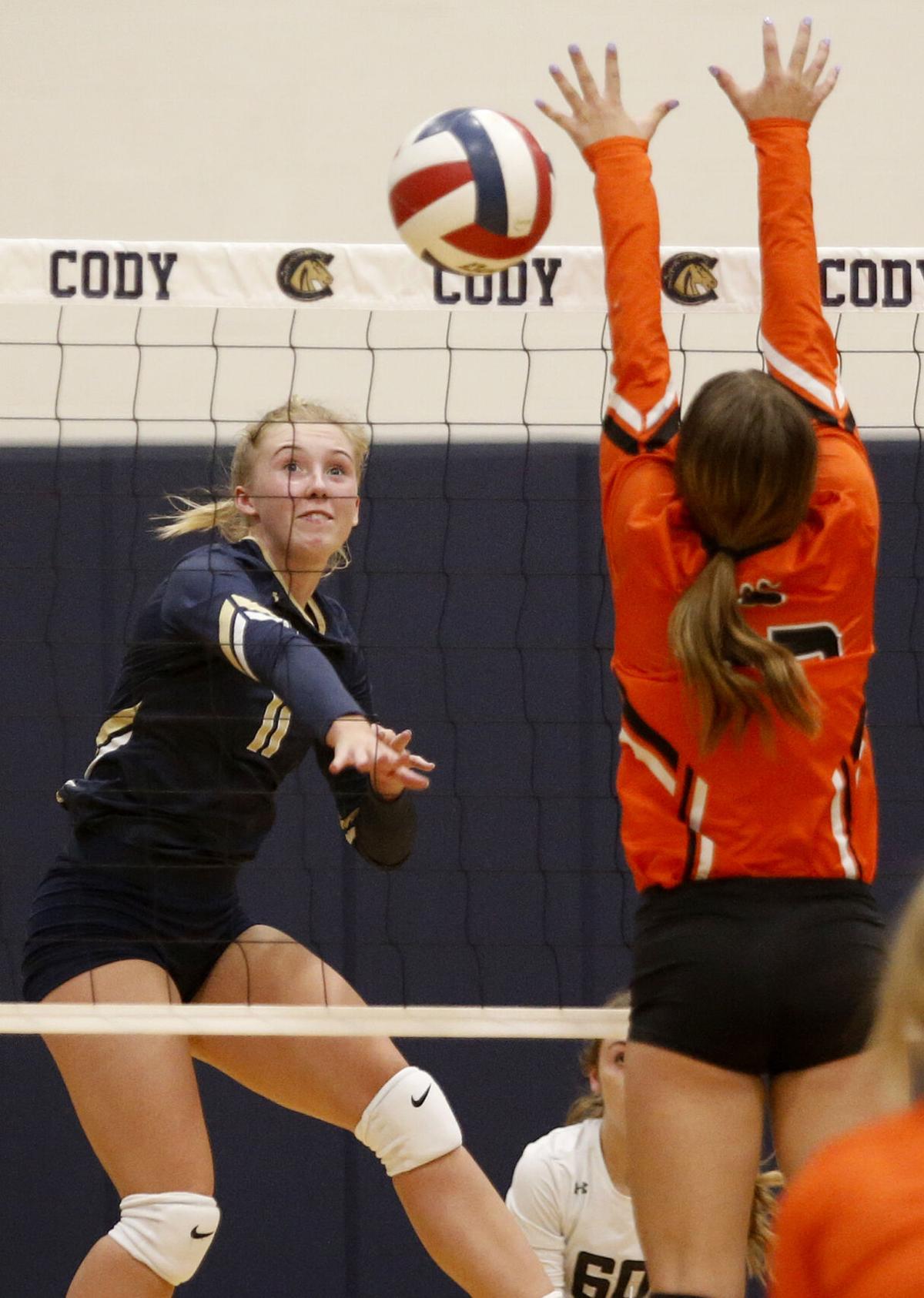 Autumn Wilson goes for a kill against Powell.

Grace Shaffer (left) and Lake Harrison go for a block against Powell’s Kenzie Ratliff on Tuesday in Sweitzer Gym.

Kennedi Niemann passes the ball while Grace Shaffer looks on.

Brittan Bower goes up to block.

After mixing up its lineup for the past few weeks, the Cody volleyball team returned to its original rotation and swept Powell 3-0 on Tuesday.

It wasn’t the cleanest play by the Fillies, but they did enough to improve to 9-2 overall.

“We didn’t pass well and they served tough,” coach Stephanie Birch said. “But we stayed steady and didn’t get down. It was ugly, but it was steady.”

Before the match, the Fillies honored seniors including Brittan Bower and Grace Shaffer. The latter was glad to return after missing the last four matches.

“Tonight was awesome,” Shaffer said. “It was good to be back. The energy was a lot of fun and it was the ideal senior night.”

Bower said being able to defeat their rivals made it even better.

“It was really fun to play Powell,” she said. “It’s bittersweet that this is my last season, but we still have a lot of games left.”

The Fillies took a 9-3 lead in the first set thanks to a 6-0 run that included two blocks by Reece Niemann and a kill by Autumn Wilson. Cody led by as many as eight during the middle of the set, but then Powell went on a 6-2 run late to close the gap a little to 23-18. After Cody earned game point, Powell scored two more before the Fillies finally put the set away on a kill by Lake Harrison to win 25-20.

“Powell was really scrappy and got a lot of balls up that we weren’t expecting,” Bower said. “They’re a different style of team than we usually play, but we just needed to play our game.”

The Fillies struggled early in the second set as Powell pulled ahead 6-3. The Lady Panthers led by as many as five before Cody went on a run. Trailing 12-7, the Fillies took advantage of four Powell hitting errors and had a kill by Reece Niemann to make it 14-12 Powell. After pulling within one, a kill by Wilson tied the game at 14 and a Powell hit out of bounds gave Cody the lead.

“We started a little slow but then just did what we needed to do,” Shaffer said. “We started to have fun and not play so tense. We knew we were the better team.”

From there the Fillies gradually pulled away with kills by Niemann and Harrison to make it 23-17. A hit by Bower set up game point and the Fillies won the match after passing a free ball over the net that dropped between two Lady Panthers to make it 25-19.

“We had some passing problems and could have communicated better (during the match),” Shaffer said. “We have some stuff we can work on, but we came out with the win.”

On Friday, Cody will travel to Lander, hoping to avenge a 3-2 loss from earlier in the season.

“We’re all excited to go to Lander,” Bower said. “Since that game we’ve gotten a lot better and it will be good to be able to show Lander how much we’ve grown as a team.”