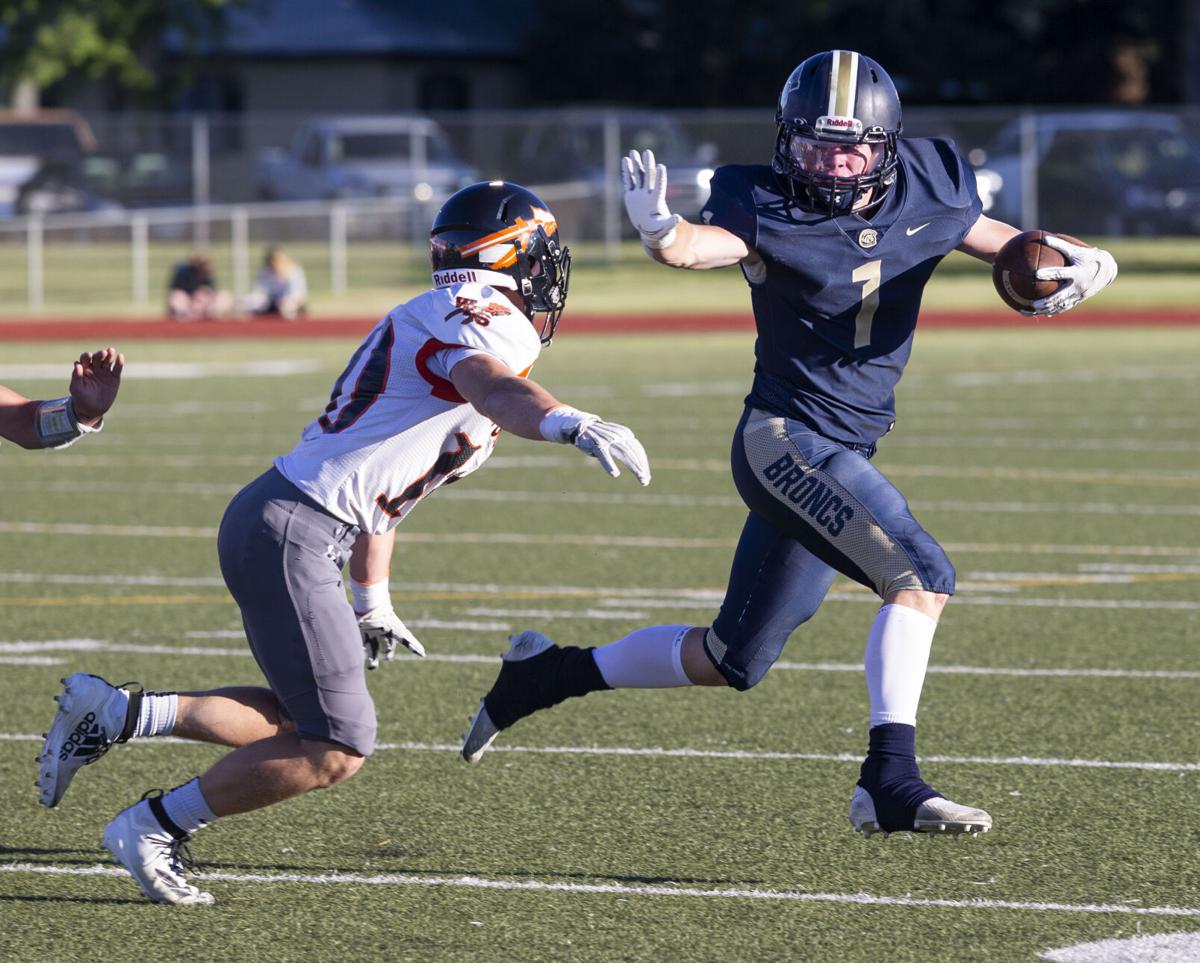 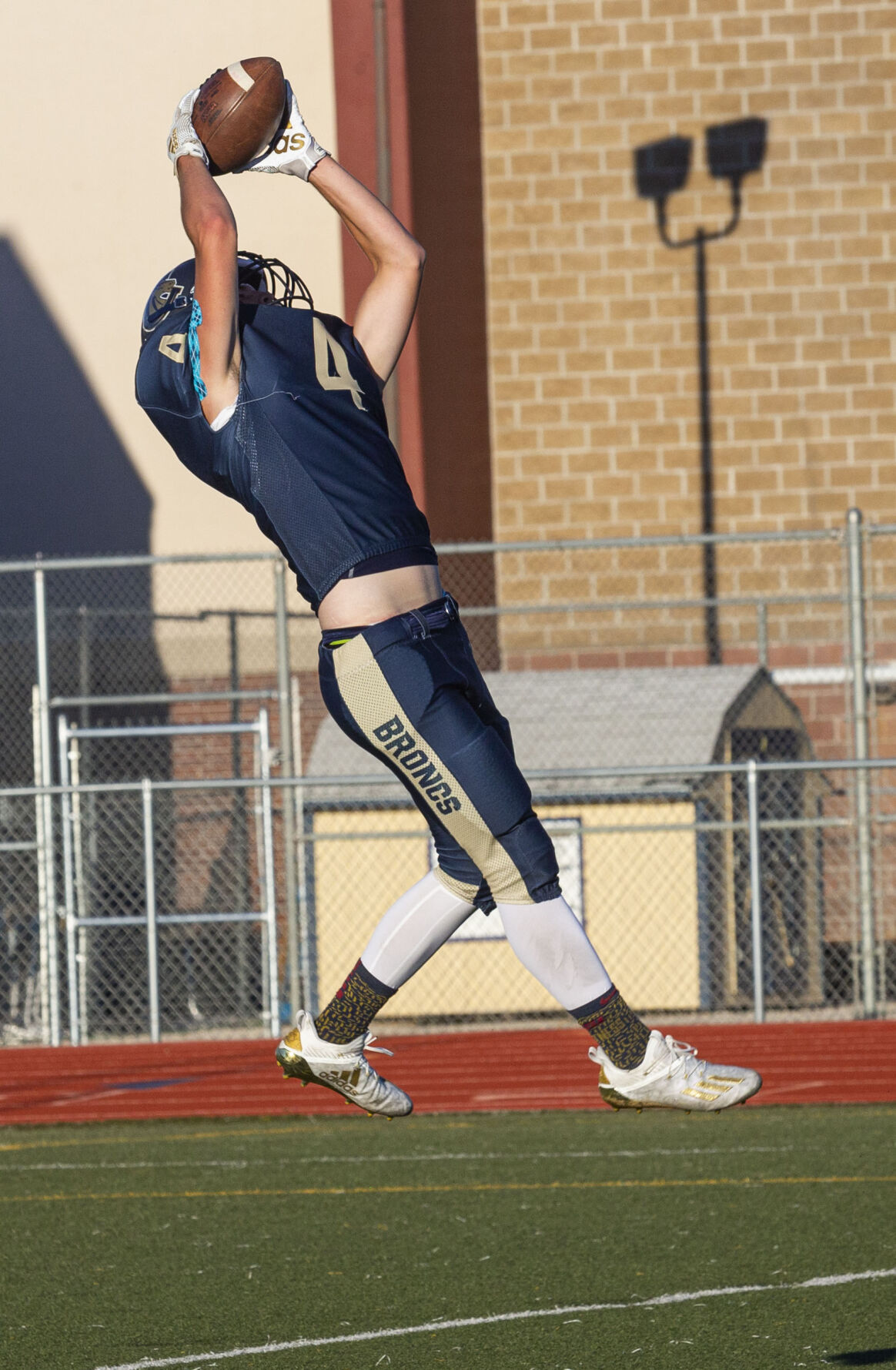 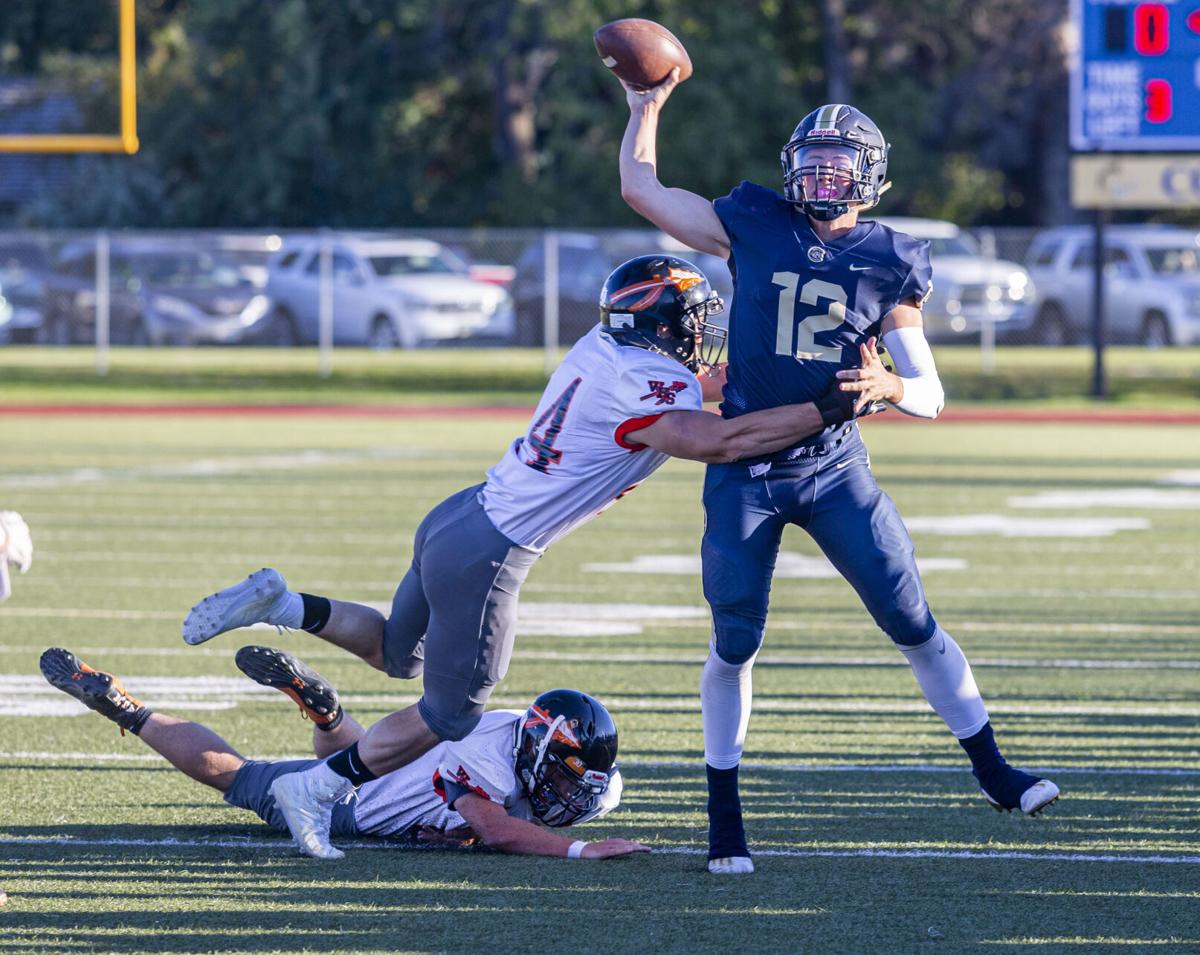 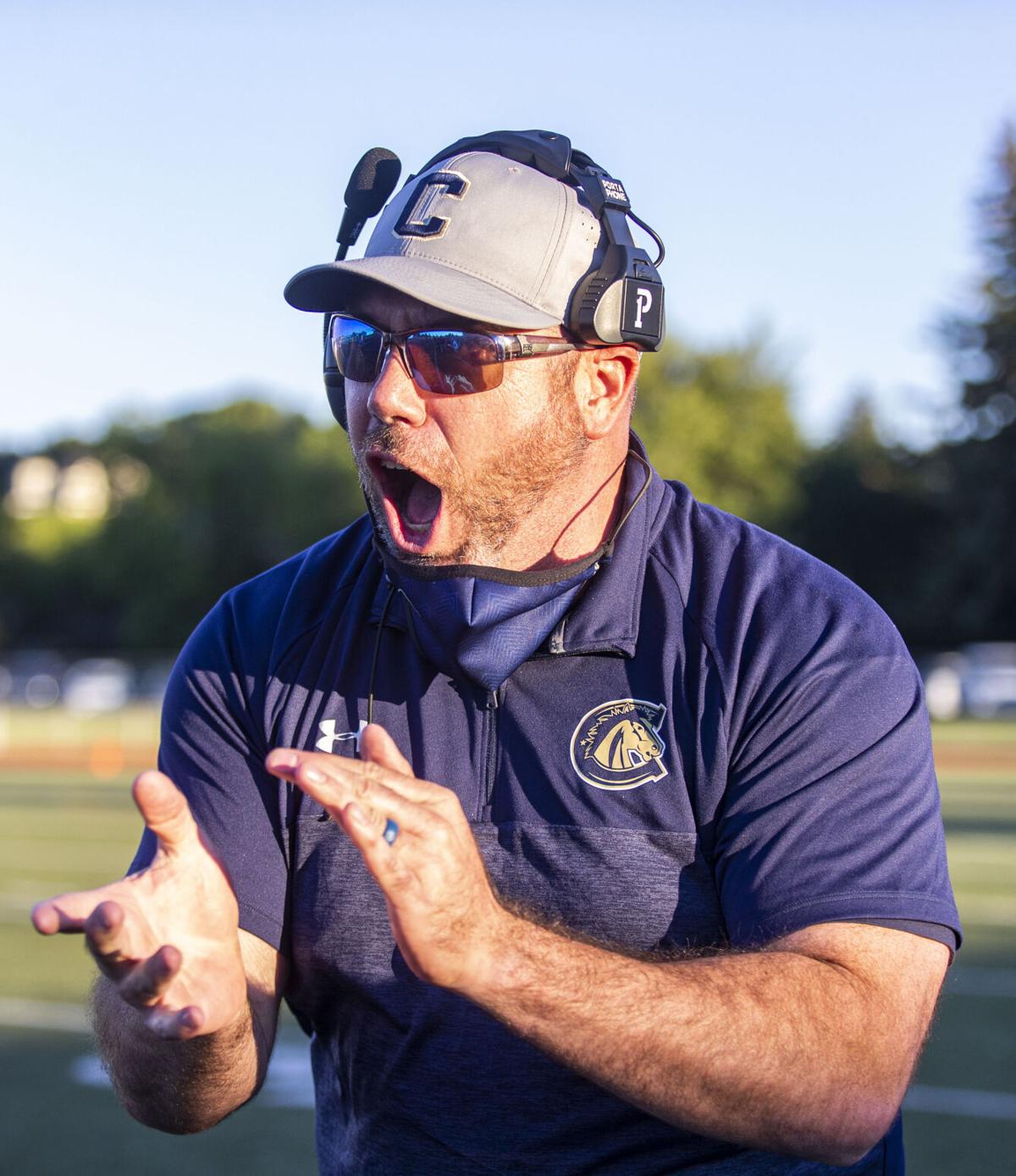 Coach Williams cheers on Cody from the sidelines after an interception against Worland Friday. 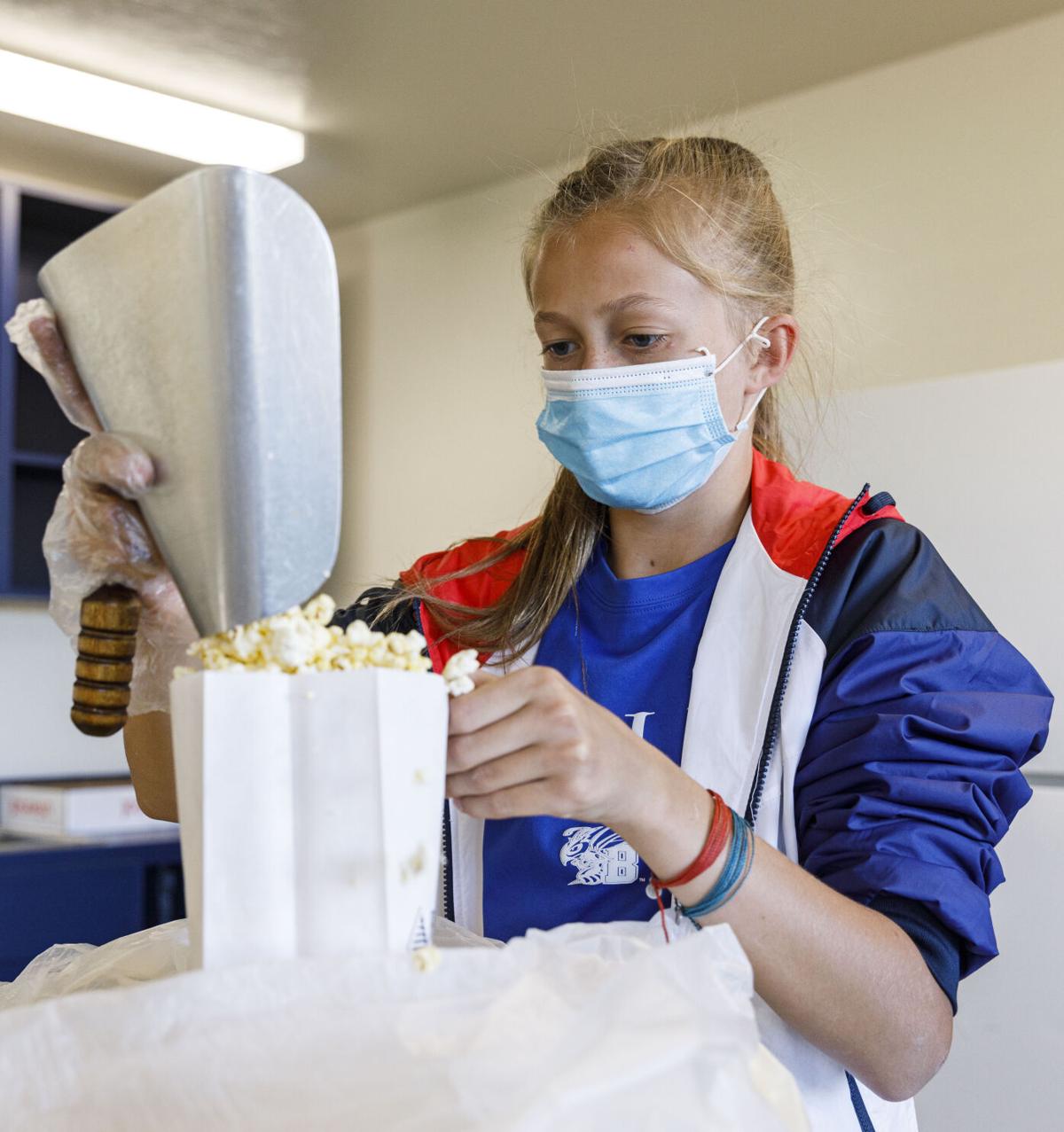 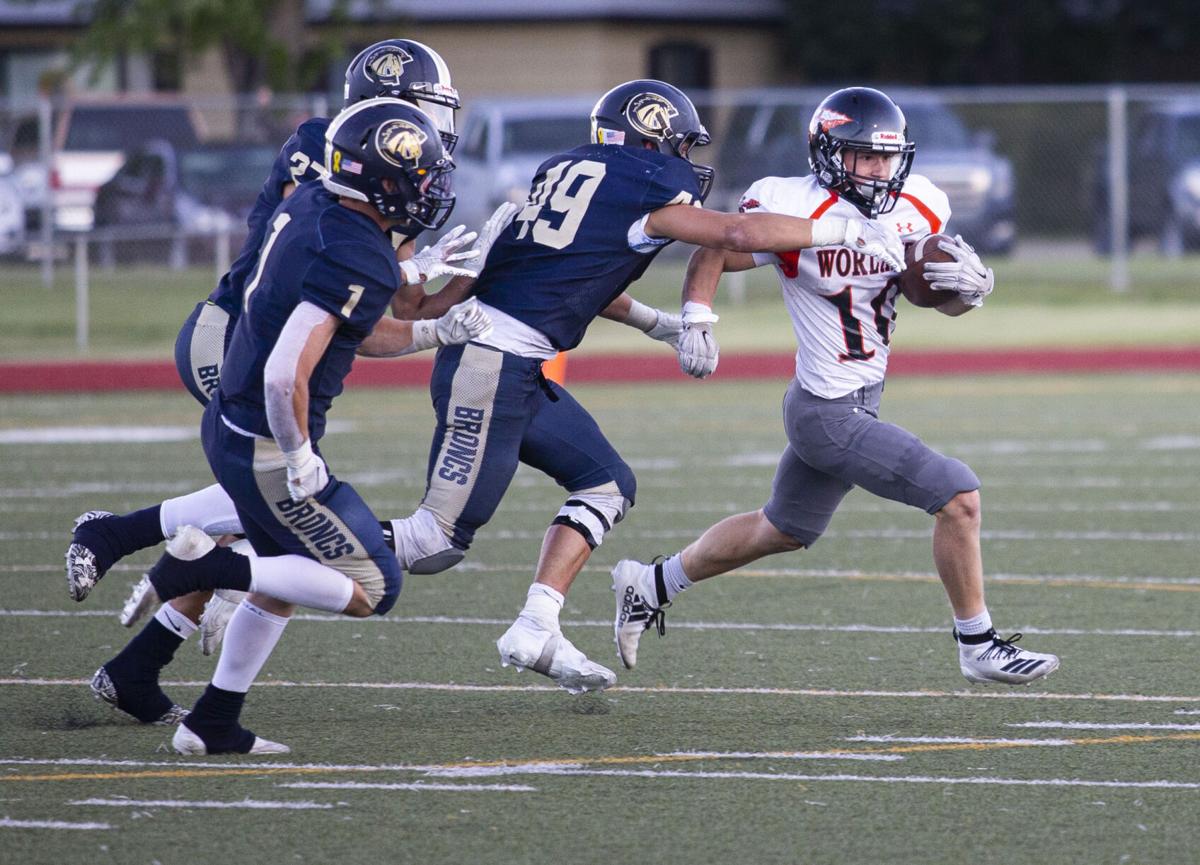 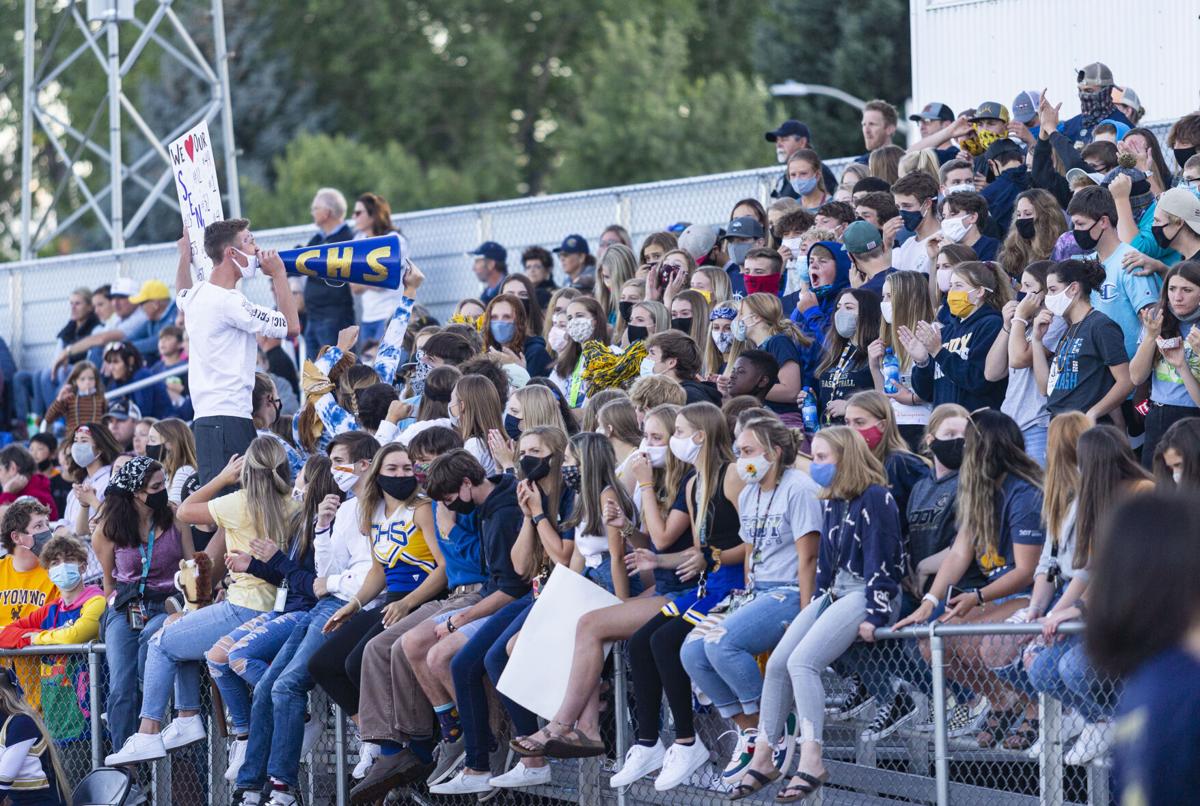 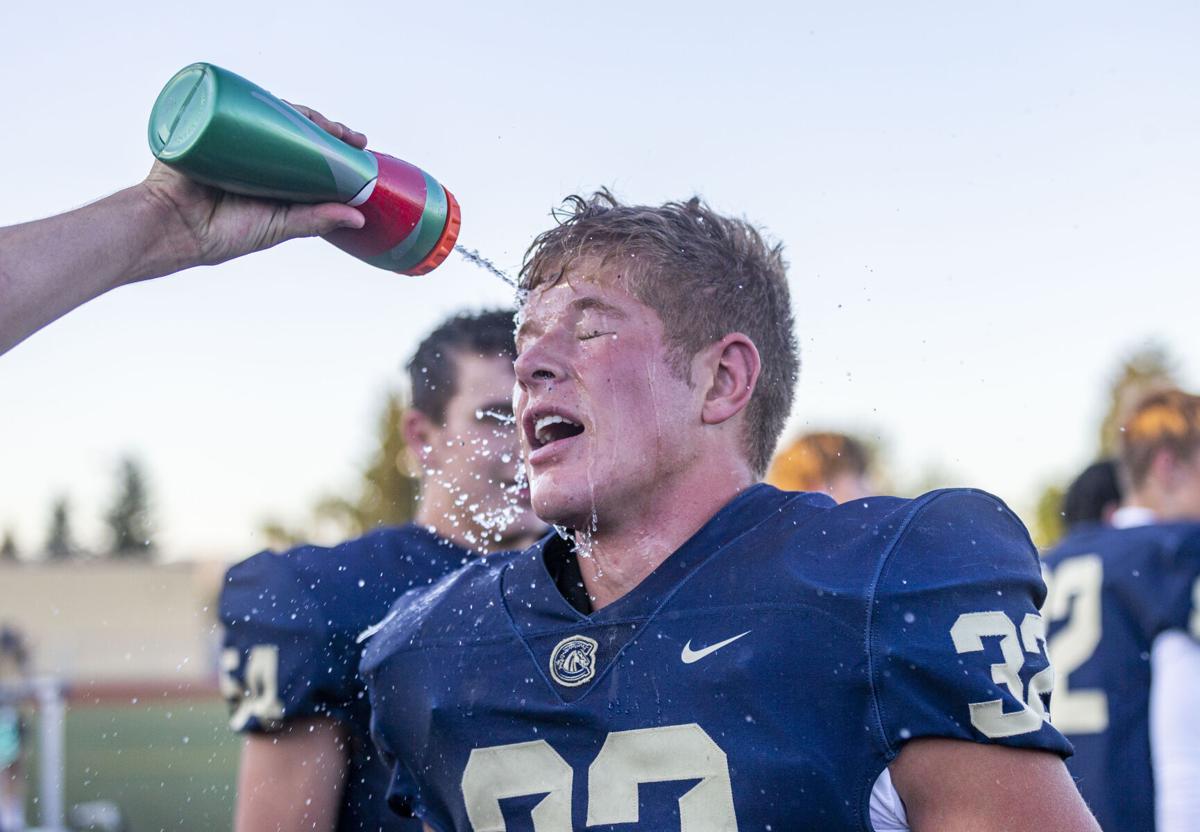 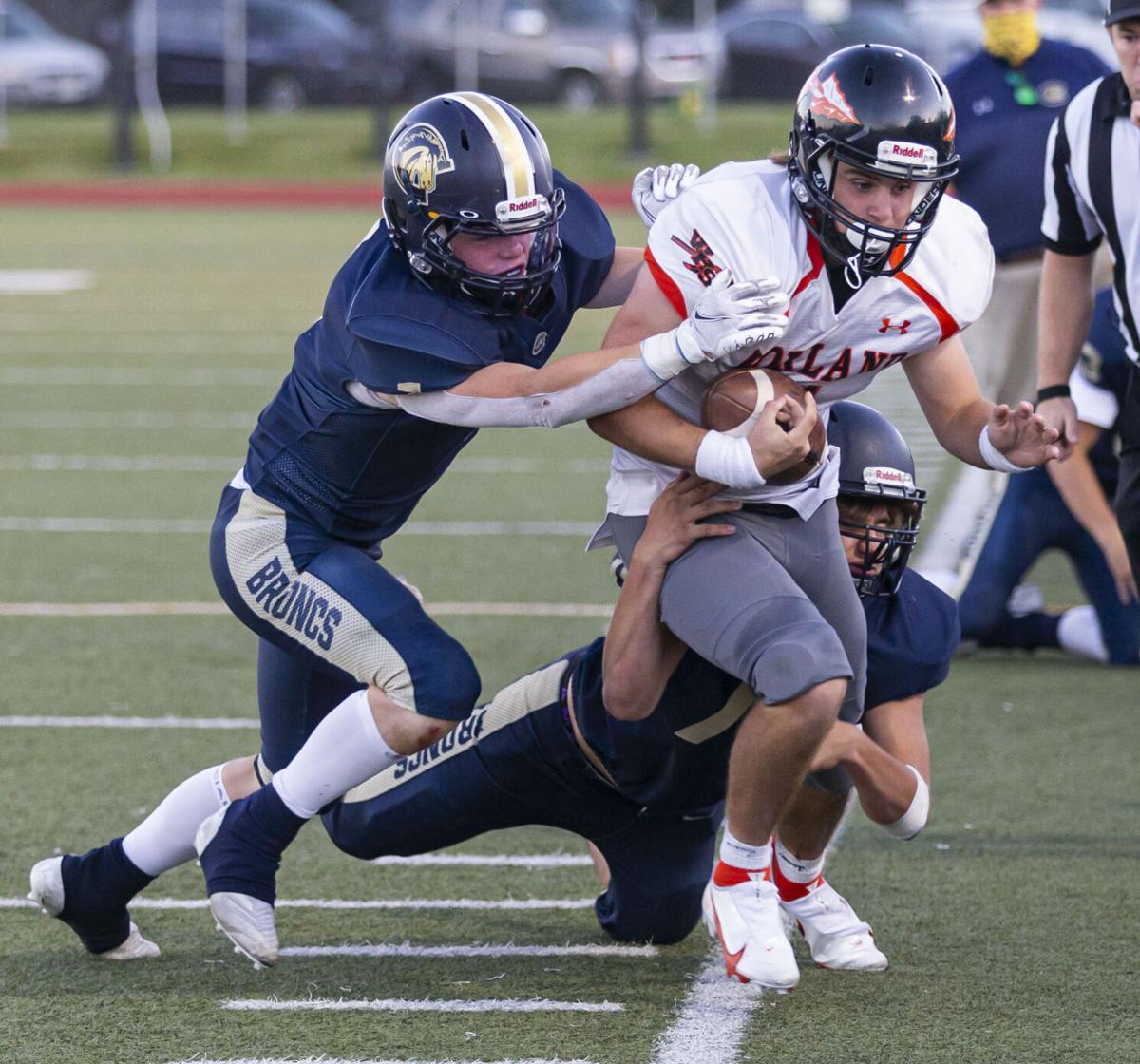 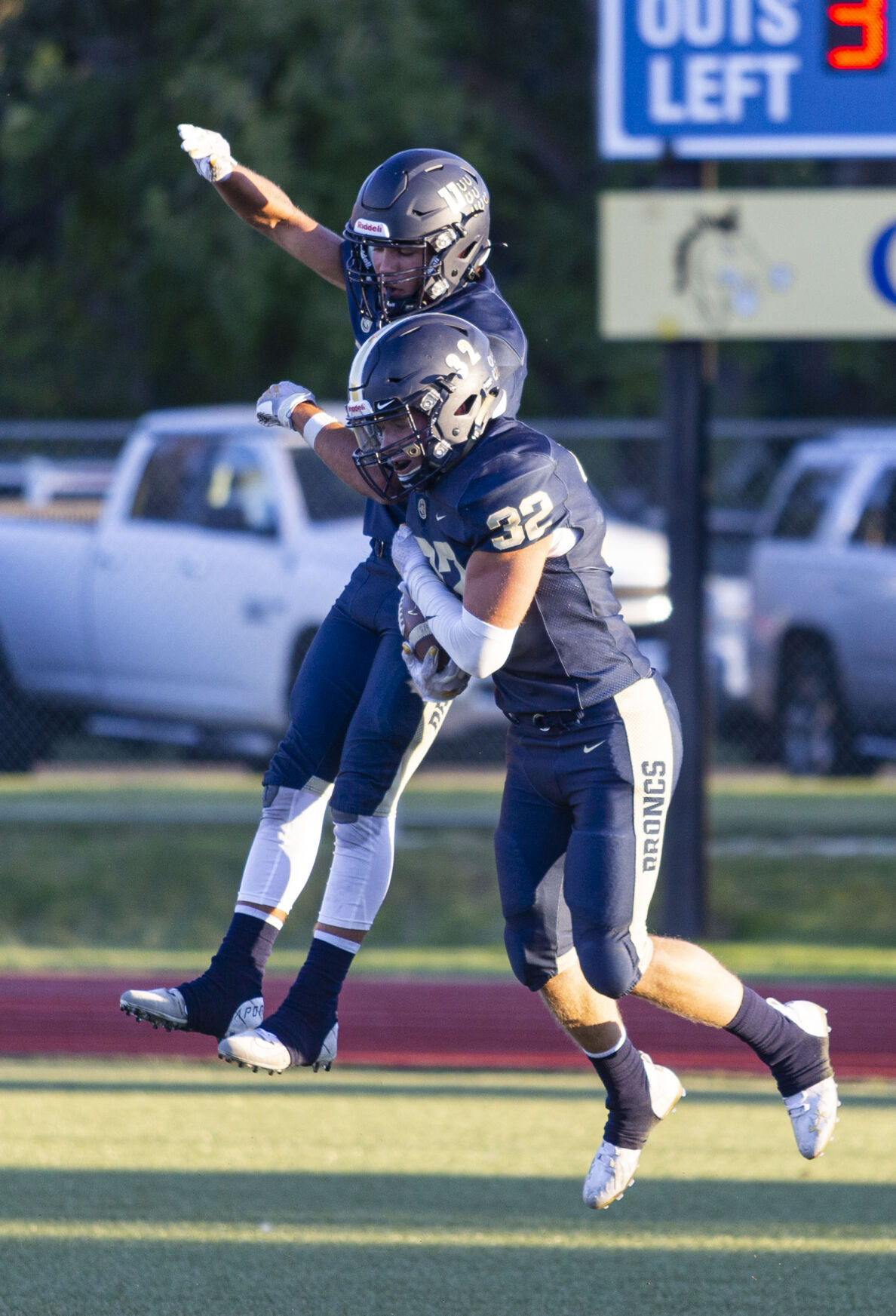 Drew Trotter (from left) and Keaton Stone celebrate a touchdown against Worland Friday. 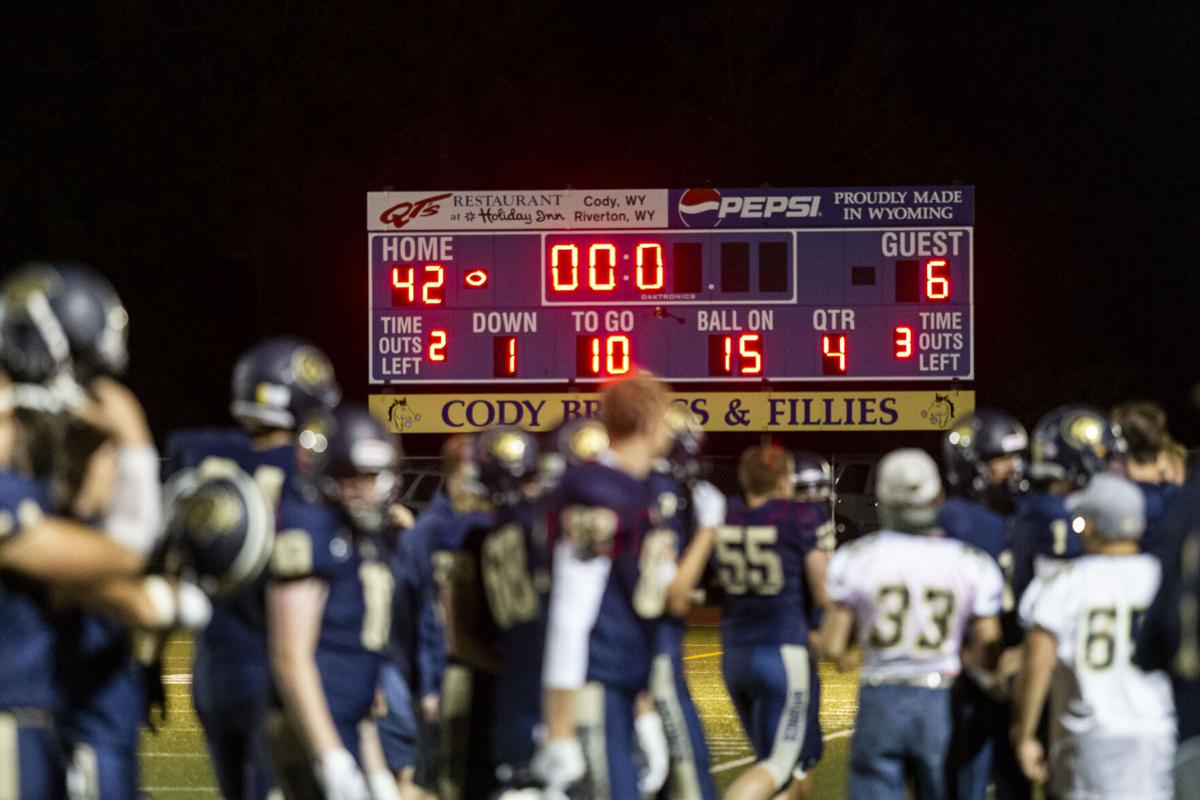 Coach Williams cheers on Cody from the sidelines after an interception against Worland Friday.

Drew Trotter (from left) and Keaton Stone celebrate a touchdown against Worland Friday.

The Cody football team’s offense has a lot of weapons – at least 15 when considering how many players touched the ball Friday night in a 42-6 home win over Worland.

“We’ve known it,” coach Matt McFadden said. “We’ve got a lot of kids. We roll two, three deep at a lot of our offensive positions.”

The team’s variety of threats was highlighted by the performance of Keaton Stone who was a force on both sides of the ball, bringing home two touchdowns and a fumble recovery in one of his best showings. The only two times Stone touched the ball on offense he scored – the first two touchdowns of his high school career.

“I just wanted one all season and I got two and I’m really happy,” he said.

Devyn Engdahl also had a touchdown and an interception against Worland (0-2).

After a relatively slow start, the Broncs found momentum in the second quarter scoring two touchdowns in a span of 25 seconds and had three unanswered touchdowns to finish the game.

“We came out in the second with lots of energy,” Phillips said. “You can’t take anything for granted. We have to play every game like it’s our last.”

Early in the first quarter, Pryor made an incredible recovery on a high snap. He only got his fingertips on the ball off the snap but then caught it off a bounce as three Worland rushers followed hot on his tracks. Rolling to his left while under pressure and in traffic, Pryor found Devyn Engdahl with a 12-yard pass to bring the Broncs to the 1-yard line.

Nic Talich rushed it in on the next play and Jackson Gail nailed the PAT to make it 7-0.

It was defense that kept the Broncs in the driver’s seat early on.

With 2:14 left in the first, the Broncs stopped Worland running back Lane McBee on two consecutive short rush attempts to cause a turnover on downs.

“The adjustments were critical,” Pryor said. “They came out with some stuff to stop what we had, but we adjusted and came back and our offensive line did a great job with that.”

It was not until an Engdahl interception halfway through the second quarter that the Broncs offense found life. With 1:57 left in the half, Engdahl received a 23-yard touchdown pass from Pryor to make it 14-0.

On Worland’s first play from scrimmage on the next drive, quarterback Rudy Sanford fumbled a shotgun snap and Keaton Stone swooped in on the rush, falling on the loose ball for a fumble recovery.

“He just kind of ran over the corner (back), he’s a tough guy to bring down,” McFadden said.

Worland’s offense showed some life to start the third, but the Broncs defense came up big again.

With Worland staring at fourth-and-4 on the Cody 5-yard line, the Broncs smelled out the rush and Stone issued a big tackle behind the line of scrimmage, giving the Broncs back the ball.

At 5:46 in the third, the Warriors did finally get on the scoreboard when Jorey Anderson hauled in a 26-yard reception. Sanford missed the PAT and it was 21-6.

Porter Lee came in temporarily at quarterback at 2:15 in the third when Pryor suffered a cramp.

On his second play from scrimmage, he pitched to Drew Trotter who was able to evade five tacklers for a 13-yard gain. Chaz Cowie followed suit with a similar run on the next play for a 7-yard gain.

Pryor then came back in on the next play for a 5-yard QB sneak to end the third.

Nic Talich hurried home a 10-yard rush to start the fourth and it was 28-6.

Stone ended the next Worland drive when he sacked Sanford for a 7-yard loss on third-down. Talich then deflected the punt and the Broncs took over with great field possession on the Worland 43.

On that drive Pryor found Stone for a 15-yard touchdown reception with 8:41 left in the game to complete a six-play, 43-yard push.

“We got a lot of good wide receivers and just skill players and a good quarterback in Caleb,” Stone said.

Talich shut down a quarterback sneak on the next Worland drive and then blocked the fourth-down punt, setting the Broncs up at the Warriors 19.

From there, Nathan Wilson scampered off 17 yards to the 2-yard line and then Cowie rushed it home to make it 42-6 with 6:35 left.

On the next possession, the Broncs moved some players around on defense, bringing in Karsten Stone and moving Reese Ward to middle linebacker.

On offense some younger players came in as well. Sophomore Remy Broussard rushed off 21 yards on two carries, while fellow 10th grader Matt Nelson took a 22-yard rush around the corner. Lee finished out the game at quarterback and ran off a 13-yard QB sneak before time expired.

“He knows his stuff and it’s good to know we got someone if Caleb gets hurt,” Stone said.

Talich led the team on the ground with 62 rushing yards on 16 carries while Stone led the receiving corps with 53 yards on two receptions.

Cody Phillips had 50 total yards on seven rushes and one reception.

Worland had 180 total yards on the night. Sanford was 13-for-20 with 140 passing yards and 20 rushing yards. Brock Douzenis had 89 receiving yards off nine receptions.

“We knew they were going to throw the ball at us and make it one-dimensional,” McFadden said. “I thought we did a great job covering the deep ball and in and out some short stuff.”

Cody celebrated its senior night on Friday with parents and players honored on the field before the game. The early senior night occurred to ensure the seniors are recognized in case any games are lost due to COVID-19 restrictions.

“It felt great. It gave us lots of energy,” Phillips said.

The night also started with a moment of silence for Rob Russell, a 1977 Cody High School graduate and former Bronc football player, and for the victims of the 9/11 terrorist attacks.

“We just need to limit mistakes and come out quick,” Pryor said. “We had a lot of those tonight, but that’s good because we have more to improve each week.”