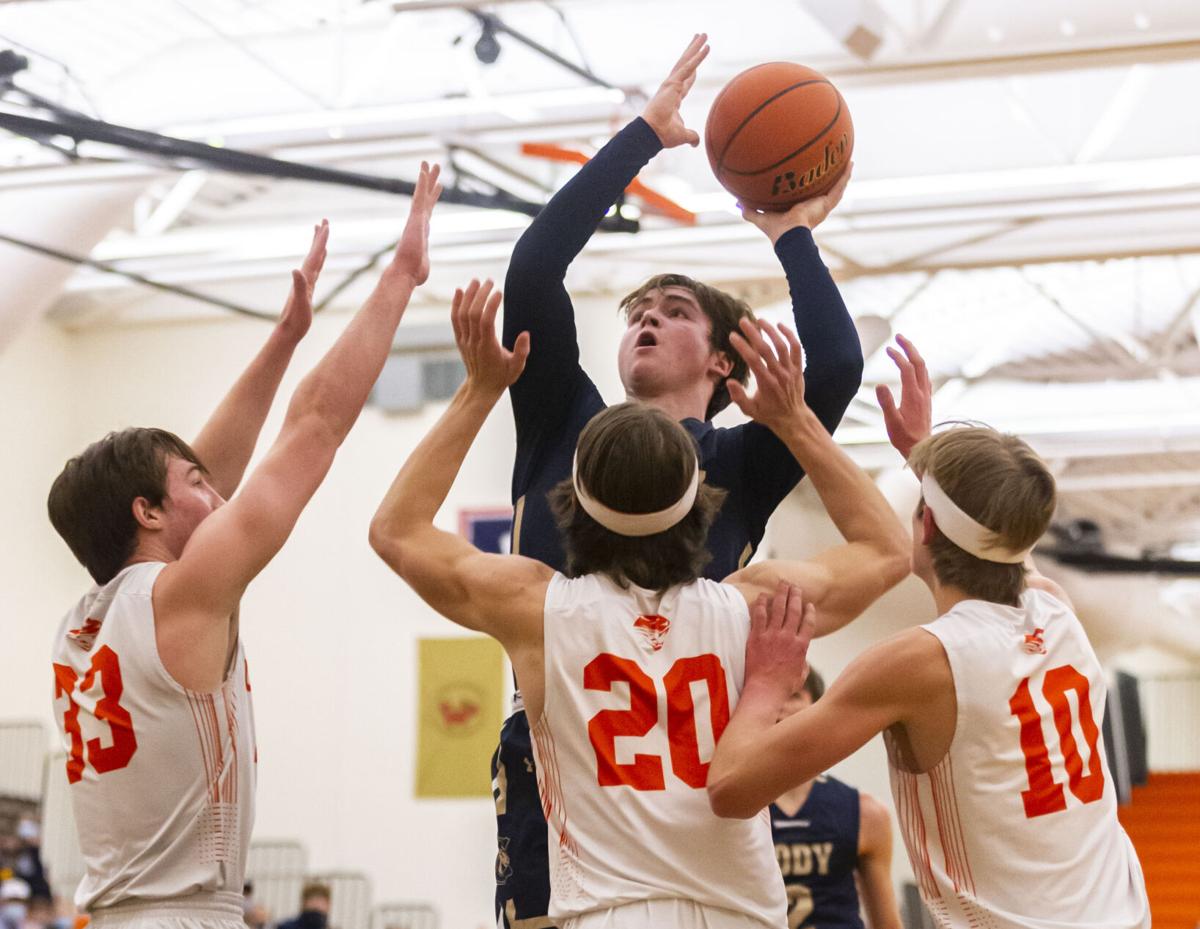 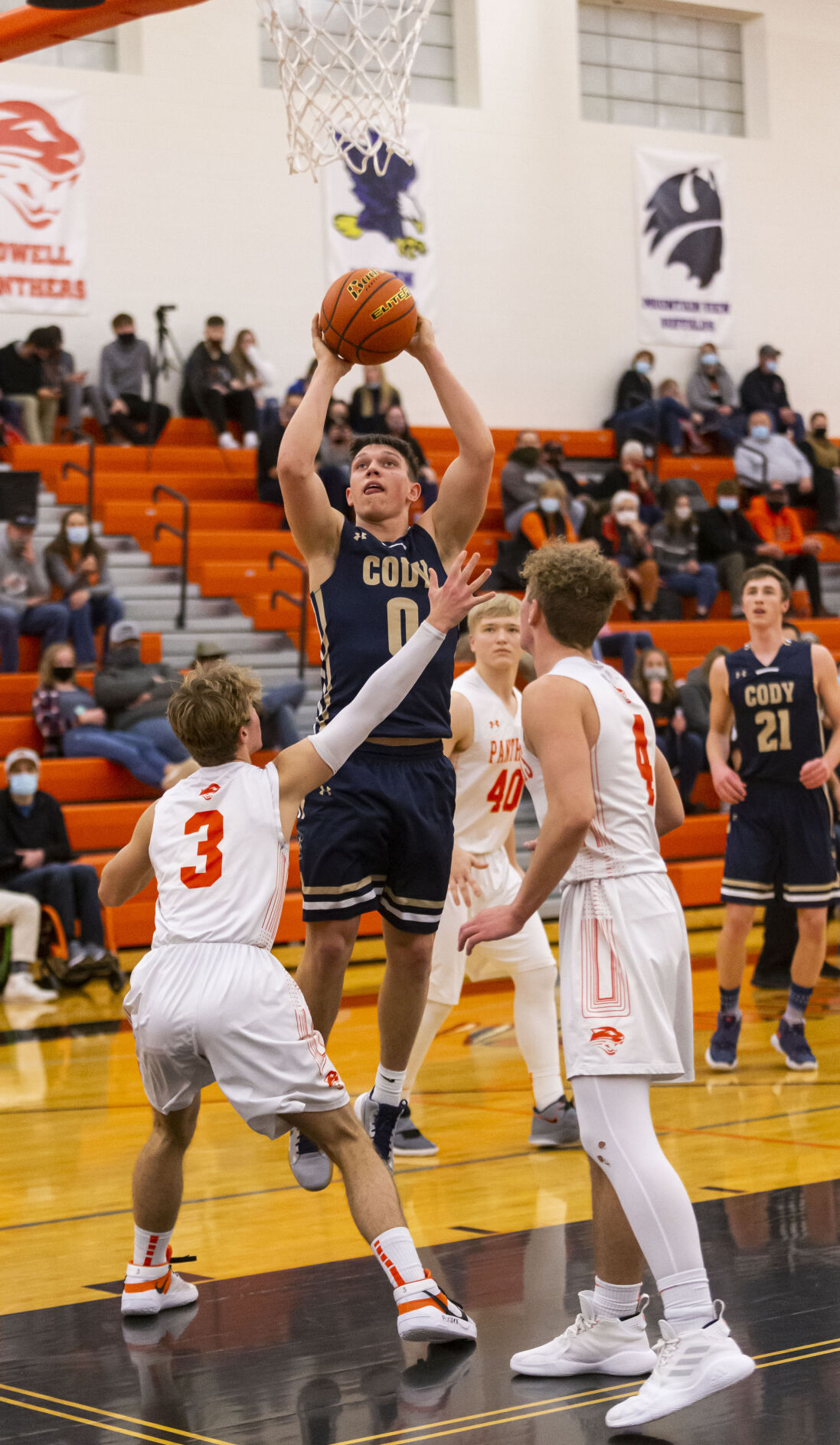 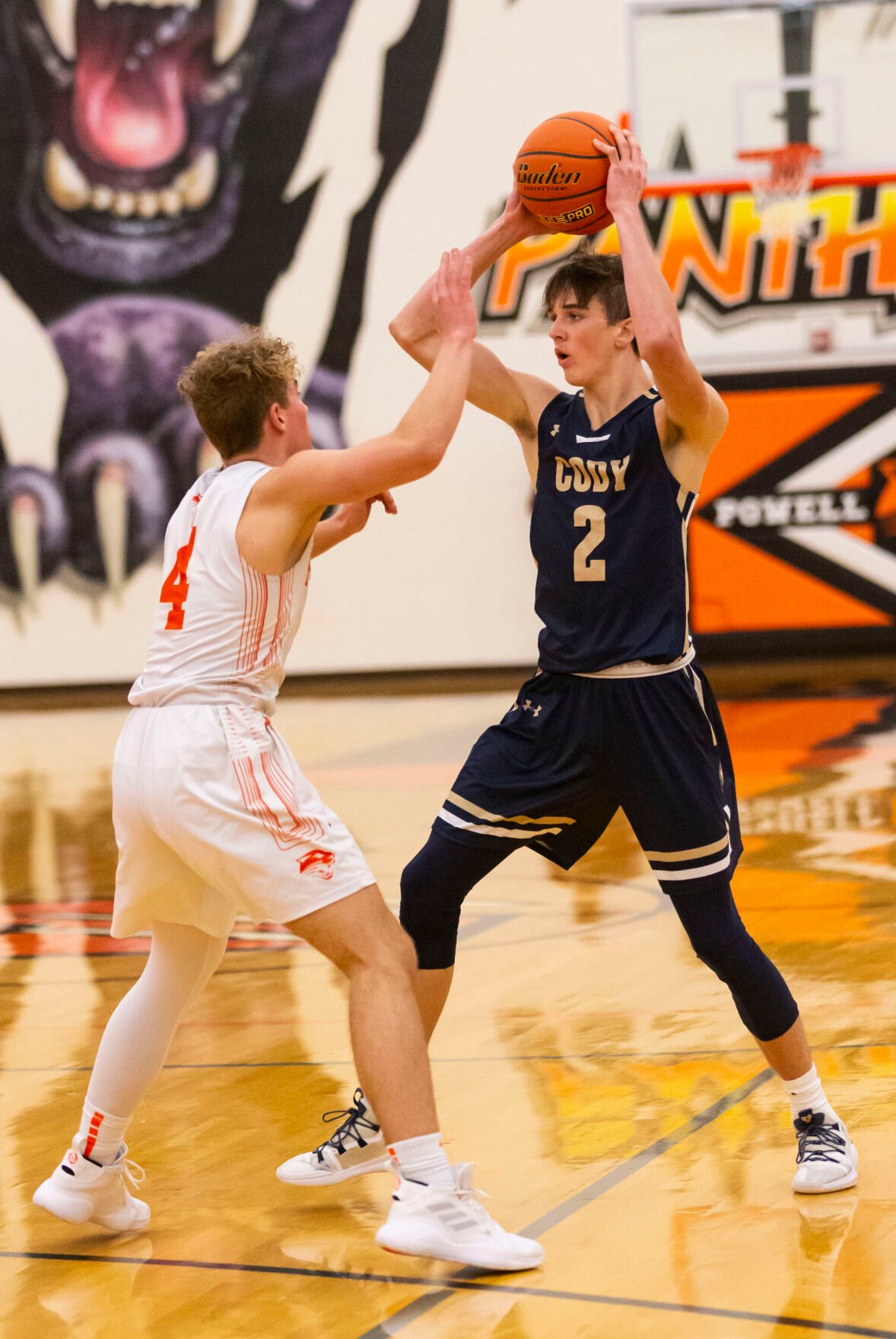 Luke Talich prepares to make a pass against Powell’s Mason Marchant on Saturday. 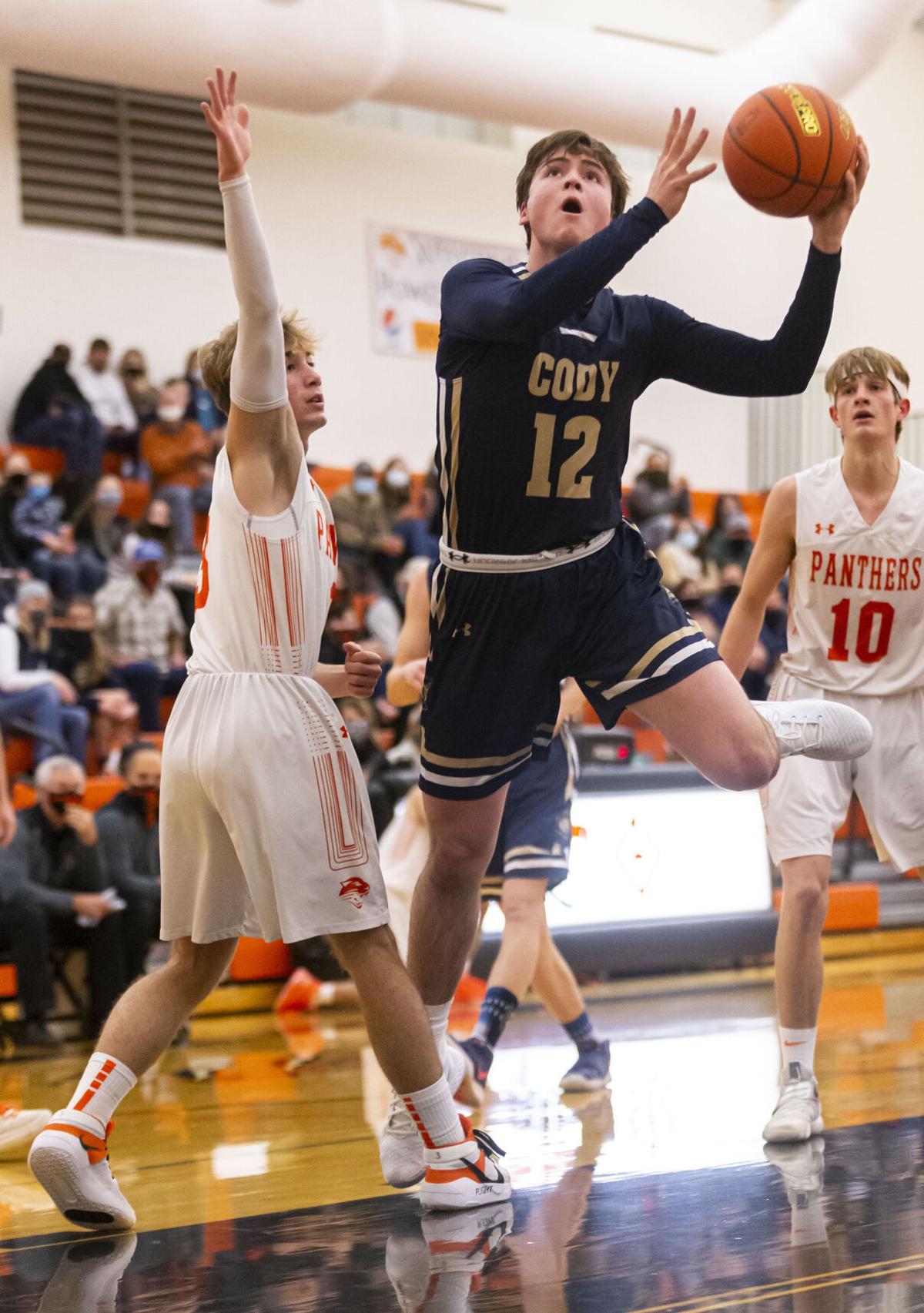 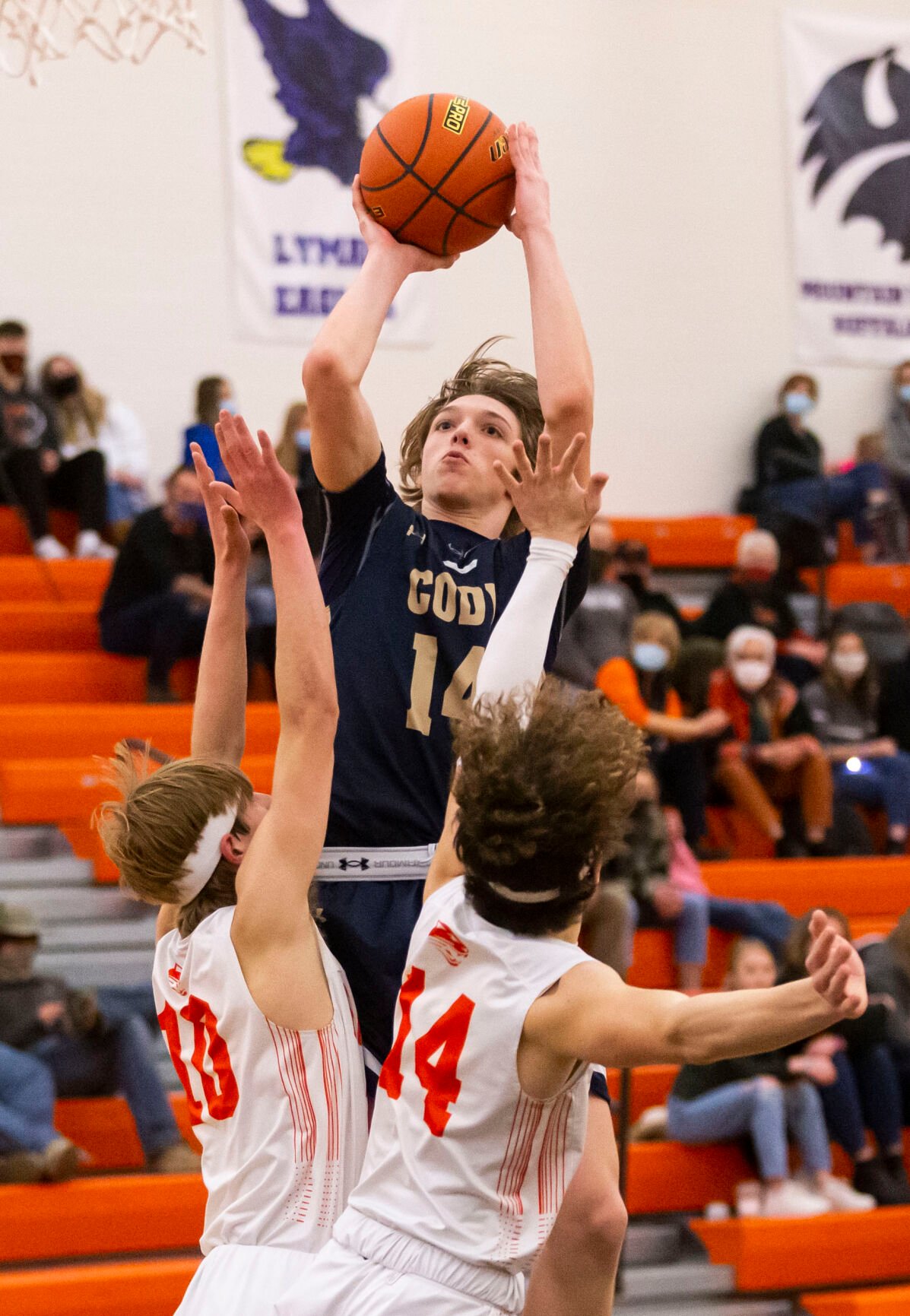 Cody Phillips takes a shot against Powell on Saturday.

Luke Talich prepares to make a pass against Powell’s Mason Marchant on Saturday.

Cody Phillips takes a shot against Powell on Saturday.

Buffeted by the simulated sounds of a dog kennel in cat country courtesy of the student section, the Cody boys basketball team went to Powell on Saturday on a mission to avenge an early season loss to their biggest rival. In an unfriendly gym surrounded by unfriendly fans, the Broncs came up short, falling to the Panthers, 60-43.

The Broncs (2-9, 1-2 conference) cruised out to a five-point lead over the second-ranked 3A Panthers (8-2, 1-1 conference) in the first quarter on the strength of a breakout quarter from sophomore Robby Porter.

“I just went out just feeling it today,” he said. “I just started shooting and after the first one went, I just felt good after that.”

Porter took the Broncs on an 8-0 run by himself, nailing a pair of 3’s and netting another shot inside the arc. Like the rest of his teammates, he cooled off after that first quarter and the Broncs lead was cut to just one by the time they went into the locker rooms.

As time expired in the first half, Porter collided with a Panthers player breaking away for a buzzer-beating dunk as he came down from the attempt. The Powell bench all stood after the play and coach Mike Heny demanded an explanation of the no-call as tension hung in the air and the Broncs players hustled to the locker room.

Whatever emotions the Powell players felt at the end of the half, they channeled them back into the game when they started the third quarter, dialing up the defensive pressure, forcing turnovers and getting out on the fast break. A high-arcing rainbow 3-pointer to beat the third-quarter buzzer from Panthers senior Mason Marchant put all the momentum in Powell’s favor. The Panthers outscored the Broncs 35-17 in the final two frames.

“Our game plan was to slow that transition game down and slow that dribble-drive, because they’ve got guys who are really good with the ball and getting to the rim,” Broncs coach Jacob Kraft said. “I thought our guys stuck to the game plan and did pretty good. Considering that we don’t play a lot of zone, I thought it was a good non-conference opportunity for us to get better in a live game situation.”

As he often has this season, Luke Talich led the Broncs in scoring against the Panthers, notching 13 points and three blocks on 6-of-11 shooting. Porter and senior Tristan Dollard each scored eight.

The Broncs hit the road this weekend for a pair of non-conference games in Afton and Jackson. They’ll start the weekend with a Friday night tipoff against the Braves (5-6, 3-0 conference) at 7:30 p.m. before heading to Jackson (1-9, 0-3 conference) for a Saturday afternoon game in the shadow of the Tetons. Tipoff on Saturday is at 2:30 p.m.