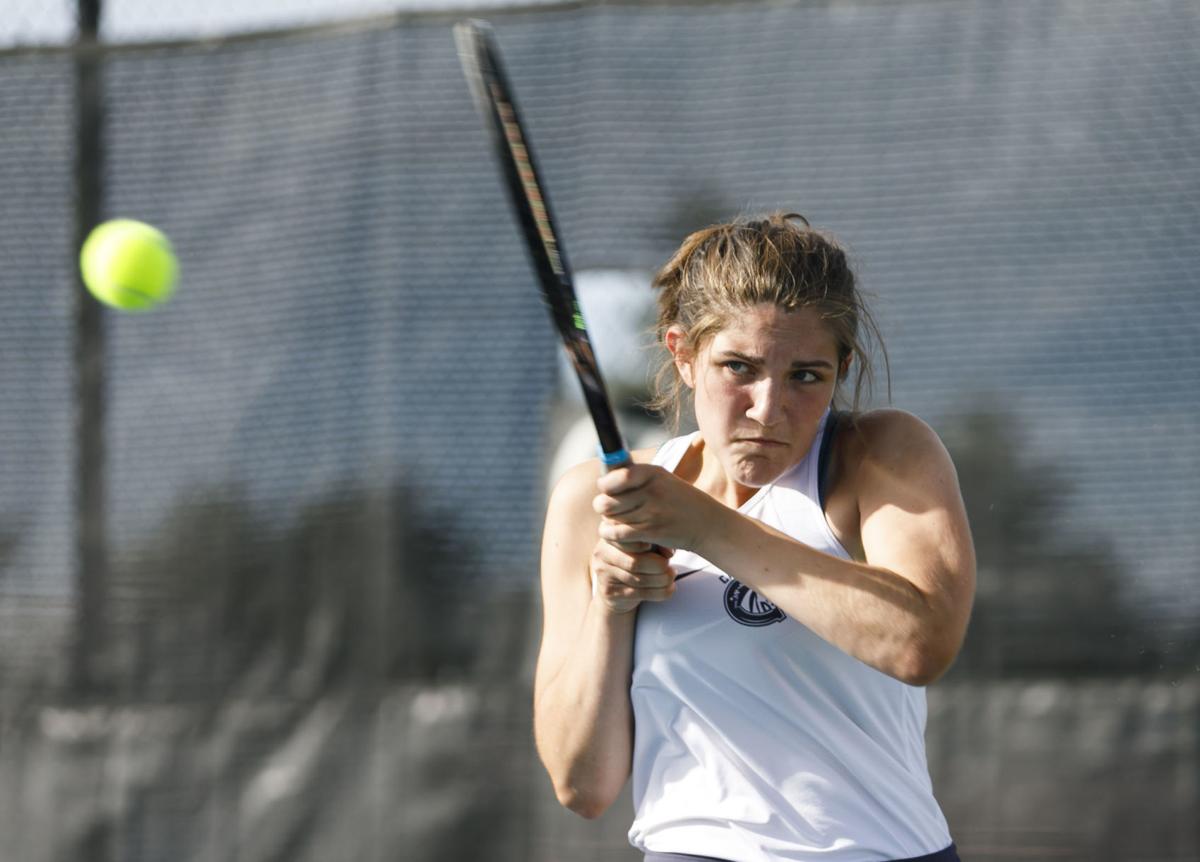 Junior Ashlyn Staggs returns a serves during the  No. 2 doubles match against Kelly Walsh High School at the Cody Tennis Complex Saturday. 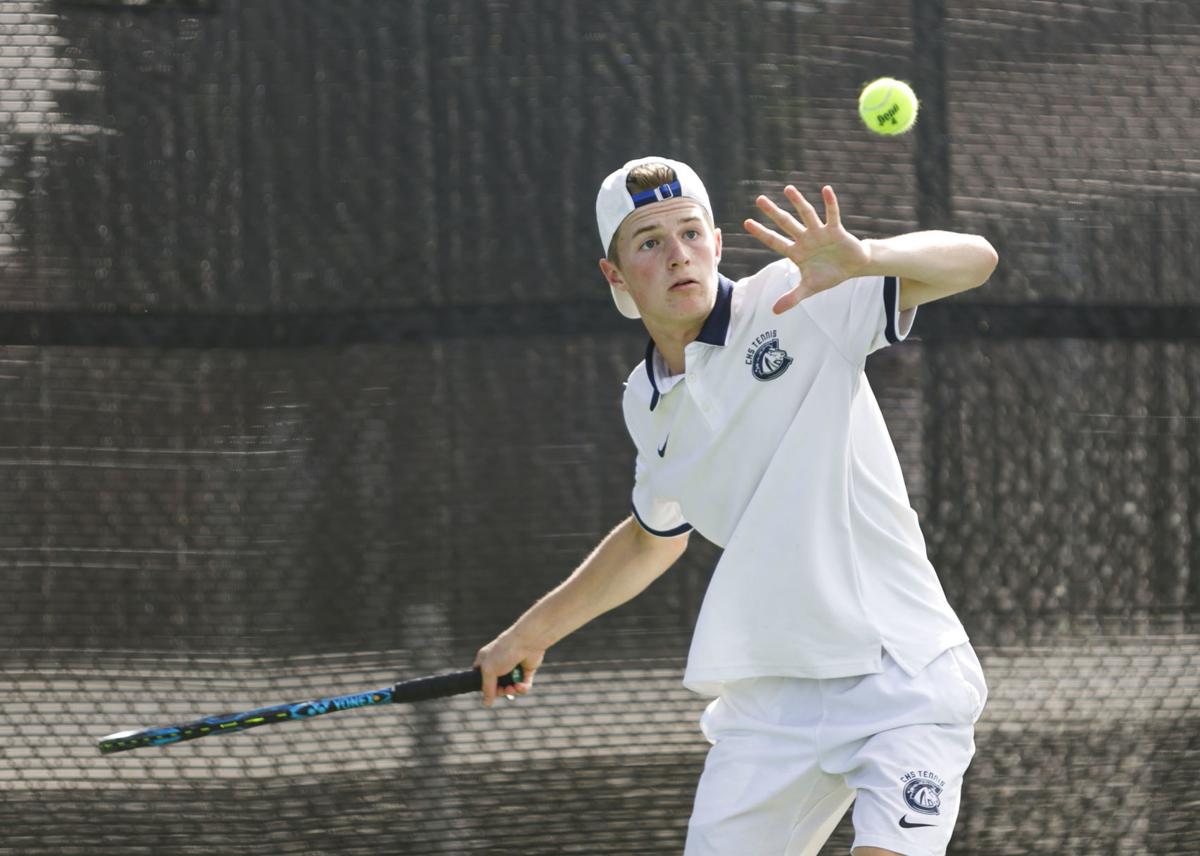 Solomon Stewart eyes the ball during the No. 1 doubles match against Kelly Walsh High School at the Cody Tennis Complex Saturday. 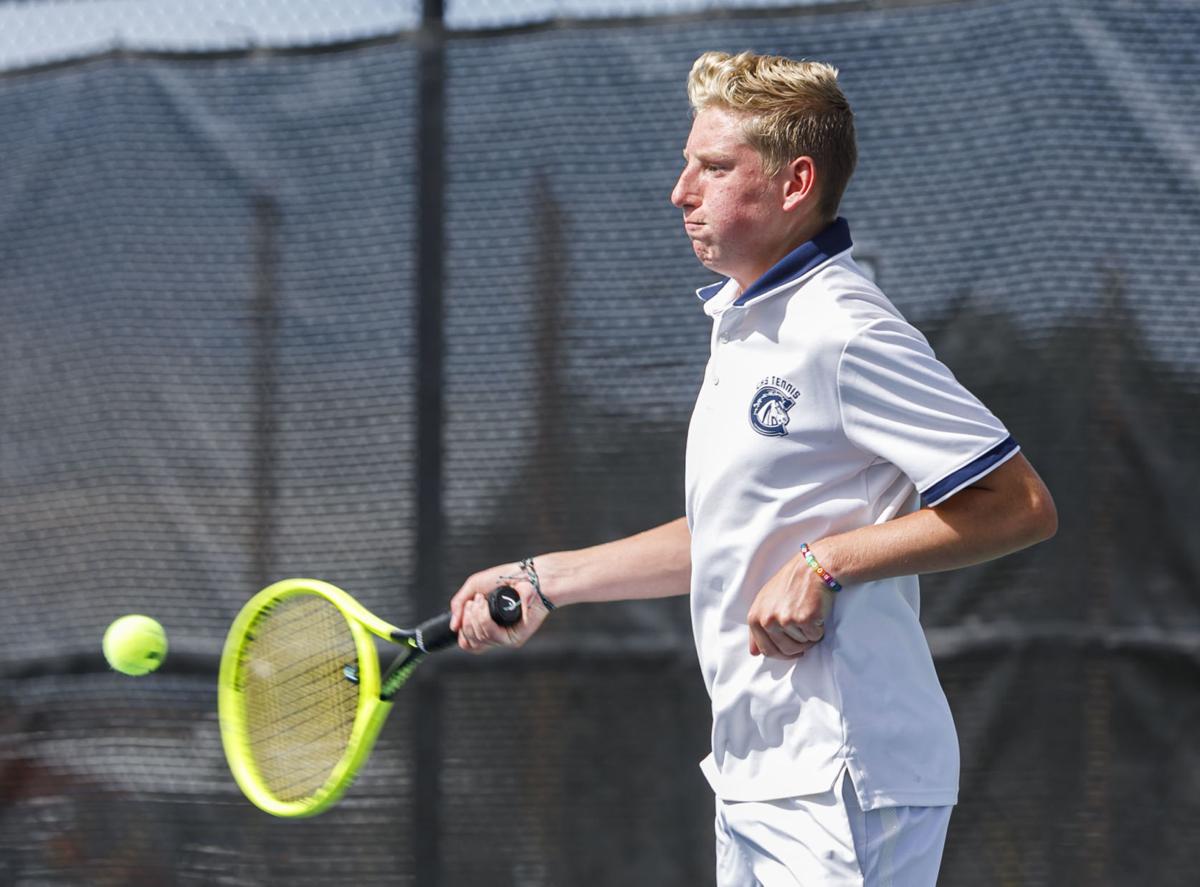 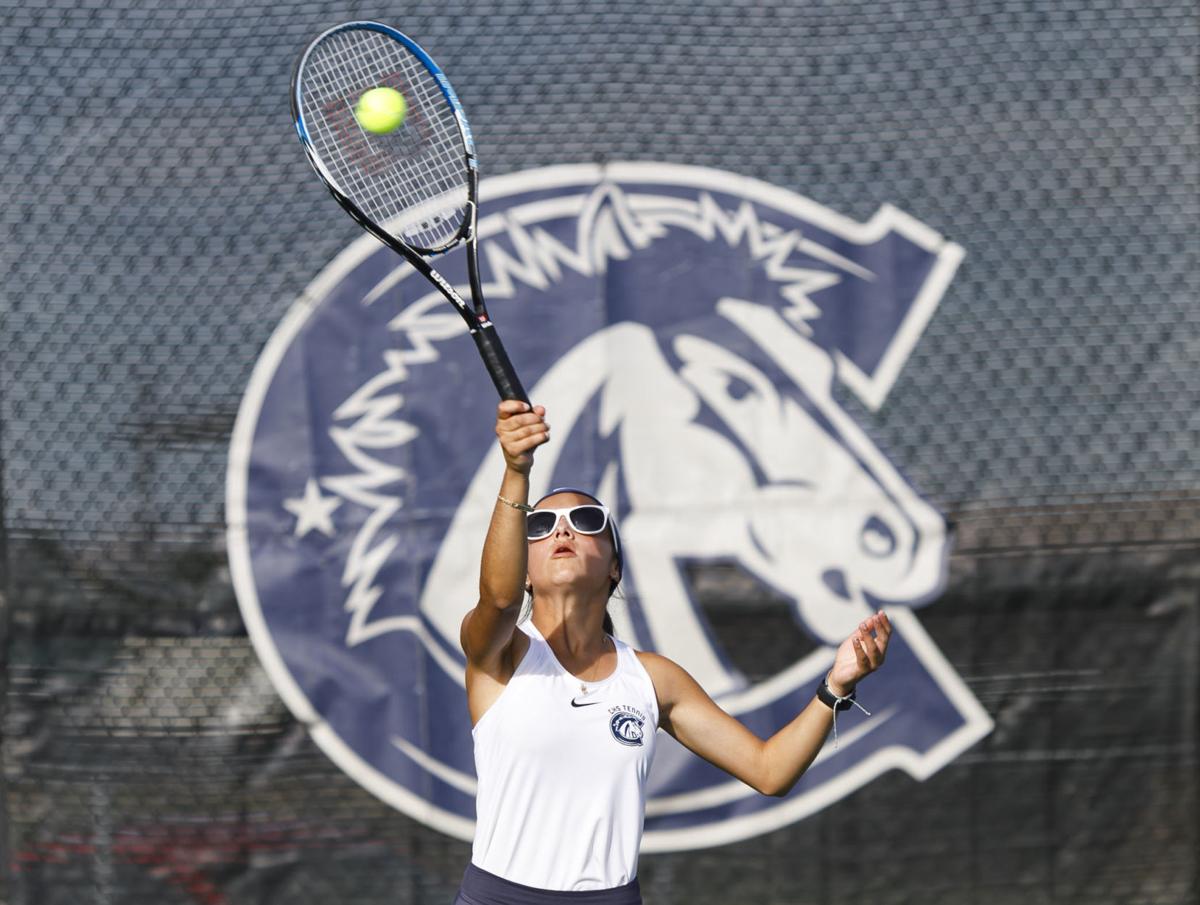 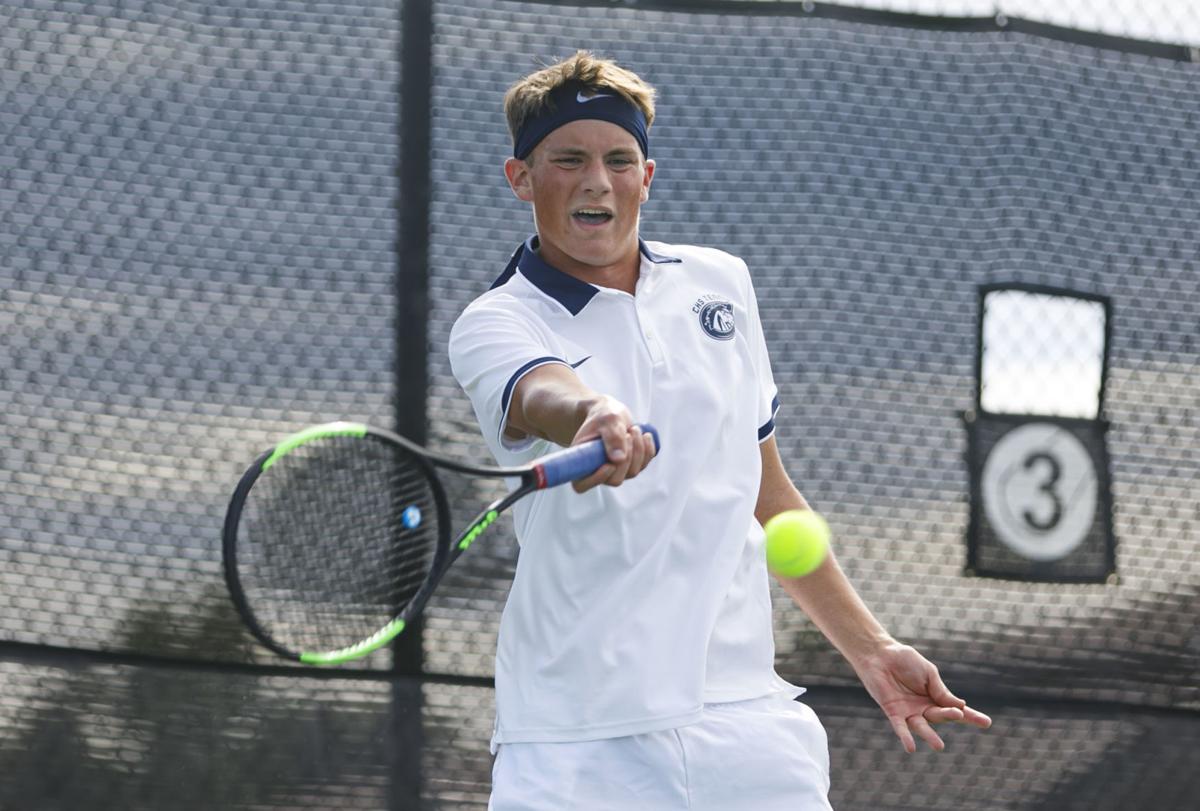 Jackson Golden hits a forehand during the #2 singles match against Kelly Walsh High School at the Cody Tennis Complex Saturday. 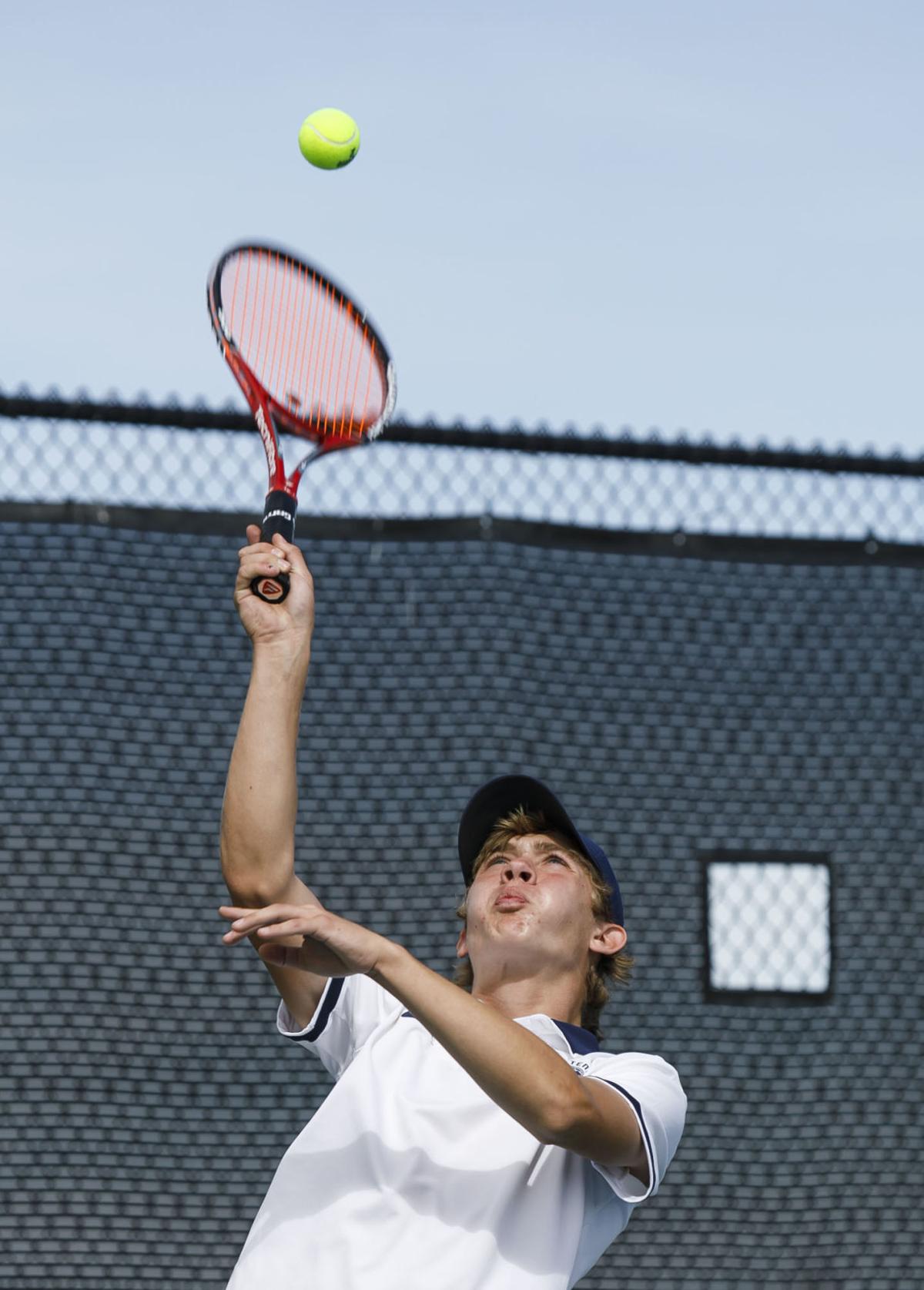 Junior Ashlyn Staggs returns a serves during the  No. 2 doubles match against Kelly Walsh High School at the Cody Tennis Complex Saturday.

Solomon Stewart eyes the ball during the No. 1 doubles match against Kelly Walsh High School at the Cody Tennis Complex Saturday.

Jackson Golden hits a forehand during the #2 singles match against Kelly Walsh High School at the Cody Tennis Complex Saturday.

Cody faced its toughest opponent yet on the final day of the tennis regular season.

For the Fillies No. 1 doubles team the opponent was tough enough to make it look easy as Simona Wambeke and Maddy Icenogle dropped just one game en route to a quick win.

“When we have tougher competition we play tougher,” Wambeke said. “When they hit hard we can hit hard back. We can get tougher shots at the net.”

For the other doubles teams the wins took awhile, but those victories secured a 3-2 decision against Kelly Walsh for the season 4A North Conference title.

The win for the Cody girls, along with a sweep of Natrona earlier in the day Saturday at the Cody Tennis Complex, secured a perfect regular season, but Kelly Walsh players will likely be a thorn in the side for regionals and state as well.

Regionals starts Thursday in Casper at the Trojans courts.

“It’s hard to lose, but it’s almost better going into regionals and state, you can relax,” she said. “Now I know what I need to do to get better.”

Thompson fell to the state’s third-best singles player from last season but had the chance to watch as the No. 2 and No. 3 doubles teams fought through tough, long matches for wins.

The No. 2 doubles team of Ashlynn Staggs and Anna Brenner recovered from a second-set tiebreak loss against Kelly Walsh to win in three sets.

In the morning, Staggs had taken a break from doubles and filled in for Thompson – who was taking the ACT test – at No. 1 singles, securing an easy win over Natrona.

“I was pretty happy with it,” she said. “I actually prefer singles over doubles.”

But Saturday doubles proved the difference.

“It was a donnybrook Saturday with Kelly Walsh for the championship,” Sedig said. “It came down to the last match being played, the No. 2 girls doubles.

“Ash and Anna rose to the occasion and steamrolled to a 6-2 third-set victory,” Sedig said.

The Broncs likewise fought through long, grueling matches but could not secure any victories, falling 5-0 to Kelly Walsh after sweeping Natrona in the morning.

Three of the five matches were decided in three sets and the No. 3 doubles team of TJ Smith and CJ Dominick went to a third-set tiebreak after the Broncs couldn’t secure match point.

“Obviously it leaves a bitter taste in your mouth,” Dominick said of the loss. “But we played really well.”

Jackson Golden is no stranger to lengthy matches and he played through another over-two-hour match against Kelly Walsh, losing the third set by two games after rallying to win the second.

And a persistent finisher, mirroring the rest of the team.

The Broncs finished the season at 6-6, 2-5 in conference play.

No. 3 doubles: CJ Domnick and TJ Smith won by forfeit