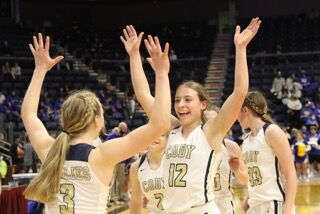 Molly Hays (left) and Ava Meier celebrate after punching their ticket to the state title game Friday with a big win over Sheridan. 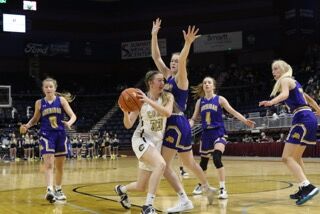 Reece Niemann looks for a pass Friday night against Sheridan. 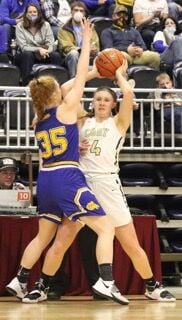 Ally Boysen looks for a pass against Sheridan.

Molly Hays (left) and Ava Meier celebrate after punching their ticket to the state title game Friday with a big win over Sheridan.

Reece Niemann looks for a pass Friday night against Sheridan.

Ally Boysen looks for a pass against Sheridan.

The Cody girls basketball team is headed to the 4A State Championship game.

After a last-second game to open the state tournament, the Fillies left nothing to chance Friday night, routing Sheridan 54-33 in the state semifinal game. No. 3 West seed Cody will play East No. 1 seed Cheyenne East at 3:30 p.m. at the Ford Wyoming Center. Cody has never won a girls basketball state title.

Cody started the Friday night game as well as they had finished the earlier game against Thunder Basin, going ahead 7-0 early against Sheridan. The Lady Broncs scored the next six, but the Fillies pulled away to finish the opening quarter, with Reece Niemann sinking a fast break layup to go ahead  15-6. After a long Sheridan trey, Cody led 15-9 after one.

The Fillies locked down in the second quarter, holding Sheridan to just four points while building a 14-point lead. Kennedi Niemann hit a 3-pointer midway through for a 25-11 lead. After a Sheridan jumper, Jessa Lynn forced a turnover on a five second call, leading to another Cody possession and a Recce Niemann layup to go ahead 27-13 at the half.

Kennedi Niemann continued to have the hot hand in the third, scoring six points early, mostly off steals, and then sinking her third trey of the game. She had 17 points through three quarters as Cody led 42-18 after three. To start the fourth, she had yet another steal and fast break layup as Cody cruised to the victory, with Ava Meier scoring four late points to make the final score.