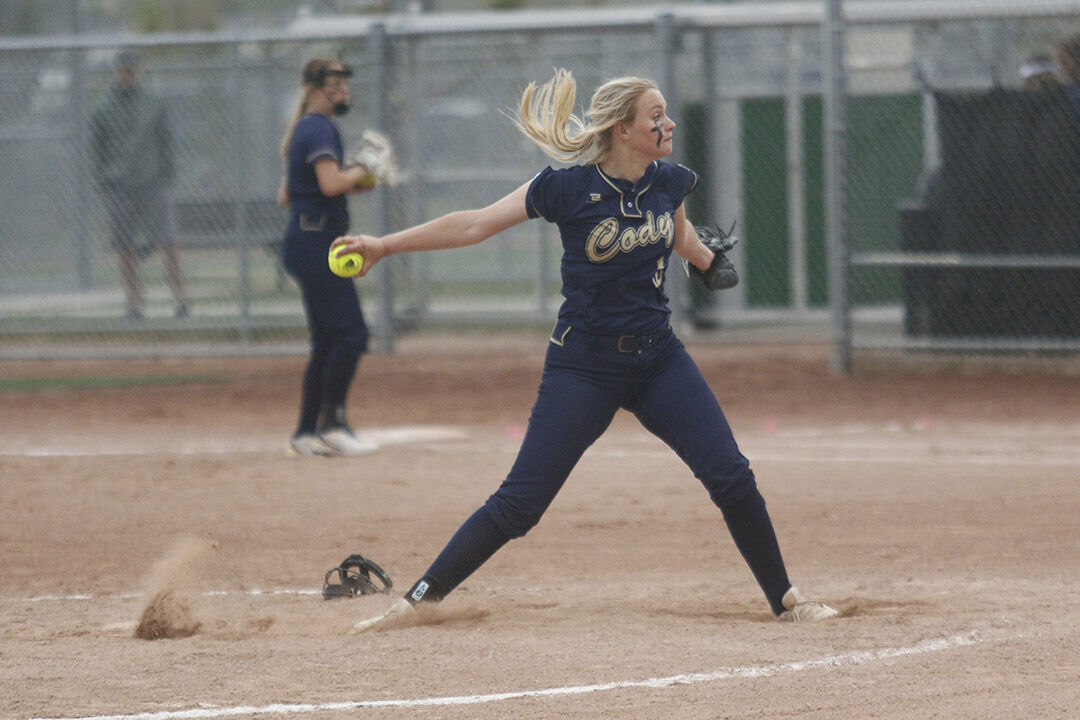 Ellie Ungrund pitches against Campbell County in the first round of the state tournament in Gillette on Thursday night. 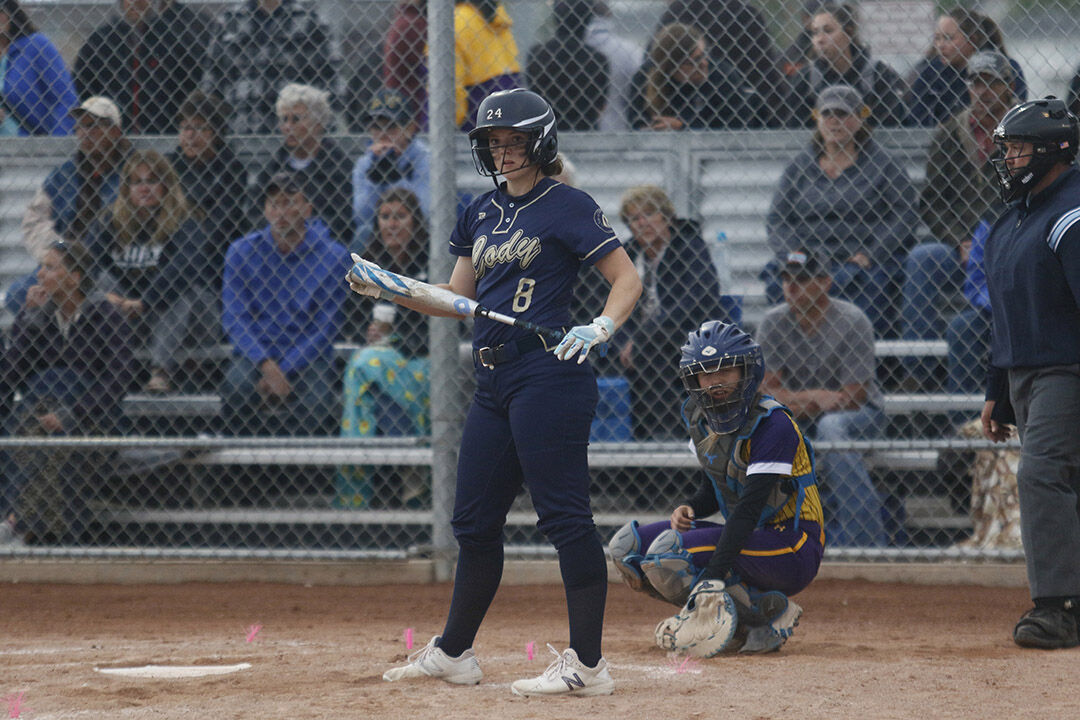 Laura Phillips bats against Campbell County in the first round of the state tournament in Gillette on Thursday night.

Ellie Ungrund pitches against Campbell County in the first round of the state tournament in Gillette on Thursday night.

Laura Phillips bats against Campbell County in the first round of the state tournament in Gillette on Thursday night.

A memorable inaugural season came to a close for the Cody softball team when they were eliminated by Cheyenne East on Friday afternoon in their third game of the state tournament. The Fillies went 1-2 at state.

The tournament wasn’t without some challenges as Ellie Ungrund played nearly every moment at state with a hyperextended knee and hurt hip, while Laura Phillips played through all three games with a broken nose.

Despite the lopsided final tally the Fillies showed great fight in their final loss, scoring five runs in the fourth inning to keep the game alive.

“I don’t look at the East game as a total debacle,” Smith said. “They kept fighting, never got down.”

“Every one of their hits was like a rocket,” Ava Wollschlager said.

Cheyenne East pitcher Jaylyn Christensen threw seven strikeouts on the mound and batted 3-for-5 with two homers, one of which was a grand slam.

After jumping out to a 2-0 lead in the first inning off hits from Violet Wollschlager and Ava Meier, the Fillies gave up eight runs to East in the second.

“It kind of just blew up in our faces,” Smith said.

In the fourth inning, Ally Schroeder hit a double, bringing in Morgan Evans. Ava Wollschlager then stole home and a single from Violet Wollschlager and a two-run homer from Meier made it 20-7.

“As soon as it got to me at third I knew it was gone,” Smith said of Meier’s dinger.

Meier led the Fillies in the game, batting 2-3 with a double and a homer. She had a terrific tournament overall for Cody, batting 6-9 with seven RBIs and three homers after only hitting one homer all season entering the tournament. She wouldn’t discount the importance of what she ate for breakfast in helping her.

“Well I did have eggs and stuff like toast,” she laughed.

Violet Wollschlager went 2-3 with two RBIs and also pitched for the first time this season against Cheyenne East, throwing a scoreless first. Smith replaced her with the usual starter Ungrund in the second inning, but Ungrund’s injuries made it quickly apparent she wasn’t her typical self, and he put Violet Wollschlager back in.

The Fillies broke open a neck-and-neck game against the No. 4 seed Rock Springs Tigers with a huge fourth inning in their second game of the state tournament on Friday afternoon to win 16-4.

With the game tied 4-4 entering the bottom of the fourth, the Fillies scored 12 runs.

Ava Wollschlager and Gabi Lee hit singles to start the inning that put their team back in the lead. Then, a Meier triple to left scored Lee and Violet Wollschlager, making it 8-4.

Through a combination of Rock Springs (6-9, 5-5 West) errors and seven drawn walks, the Fillies padded their lead even more.

In the fifth and final inning, the Tigers did load the bases with two outs, but Schroeder was able to get Katie Copsey to line out to Violet Wollschlager at second for the win.

Meier led the Fillies at the plate batting 3-for-3 with five RBIs, two home runs and a triple.

Schroeder threw six strikeouts and only allowed one earned run in a complete game effort.

Cody had a tough start to the state tournament with a team outside its conference on Thursday evening, falling 12-3 to eventual state champion Campbell County (18-8, 8-4 East).

“We were a little bit nervous and came out scared to play,” Meier said.

Cody spotted No. 3 seed Gillette a 7-0 lead through the first two innings.

The Fillies did score three runs in the fourth off a two-run double and steal of home from Emily Egger to pull within four. Ungrund and Meier were left stranded on base before the Fillies could score any more.

Cody’s offense went silent from there, only getting one more hit for the remainder of the game. That hit came from Egger in the sixth, who was then called out on a close play advancing to third.

“I argued that one,” Smith said.

Egger and Ava Wollschlager led the Fillies at the plate going 2-3.

Cody committed seven errors in the field and struck out 14 times.

The Fillies were still upbeat about state and their season as a whole.

“It was a really good learning experience,” Ava Wollschlager said. “We learned some tricks while we were there.”

Smith said the pressure of varsity play weighed heavily on most of his young team this season, but Ava Wollschlager said it helped playing in a tournament setting again, a venue where the girls had played all their games prior to this season during club travel ball.

“This whole season felt really different,” Ava Wollschlager said. “Everyone was usually a lot more nervous. We put a lot more into each game.”

Not a single member of the West conference won its first round games on Thursday, but conference foe Kelly Walsh, which Cody beat once this season, finished third. Smith said he hopes more games are scheduled against opponents from the East next year.

All but two players are eligible to return next year and many of the team’s players are planning to compete on the first-ever Cody Pride 18U club team this summer.

“If we can keep the teamwork together we can grow as a team,” Meier said. “We just need to stick together a little bit longer.”

The Cody softball team invited Cody High School administrative assistant Terri Hansen to join them in Gillette at state for her birthday weekend.

Hansen kept score for the team while there, spending each game in the dugout with the players. She had previously kept score at all their home games this season.

Hansen, a former softball player herself, gave the team some strong motivational words after their opening loss on Thursday.

“She said, “Don’t get down, you have to start out somewhere,’” Smith said.