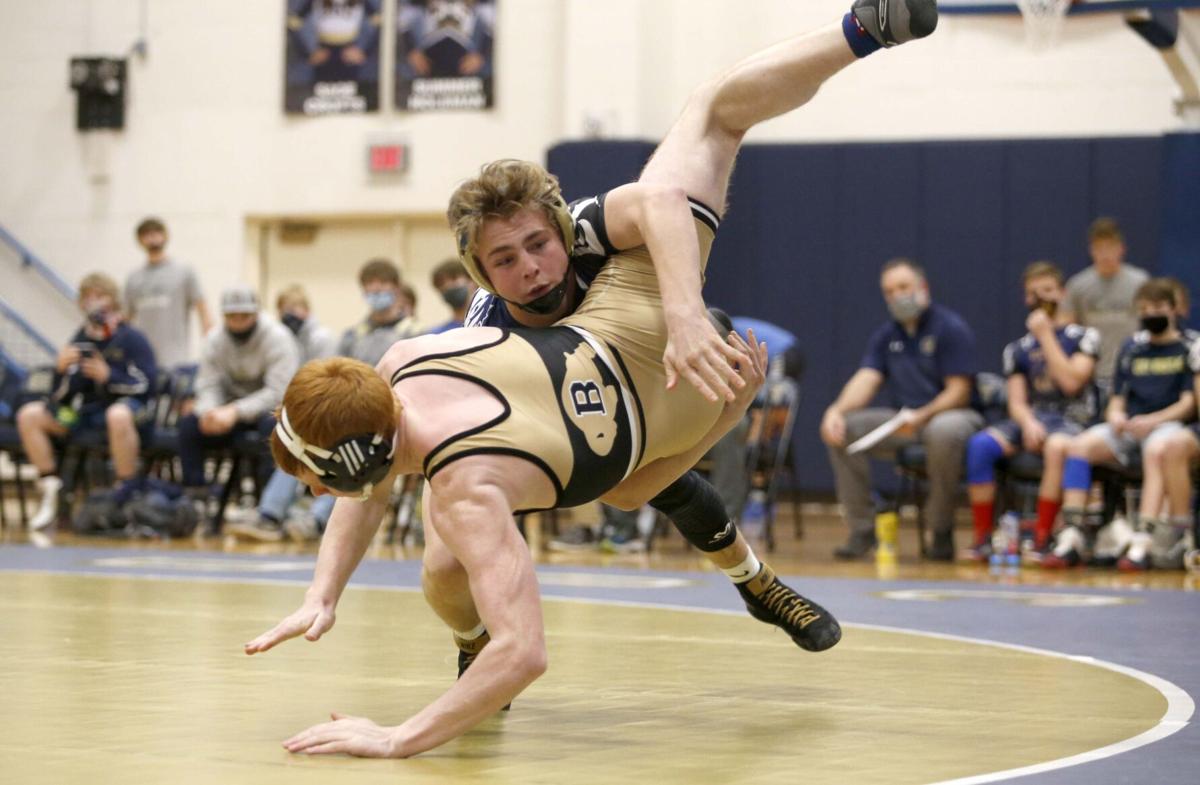 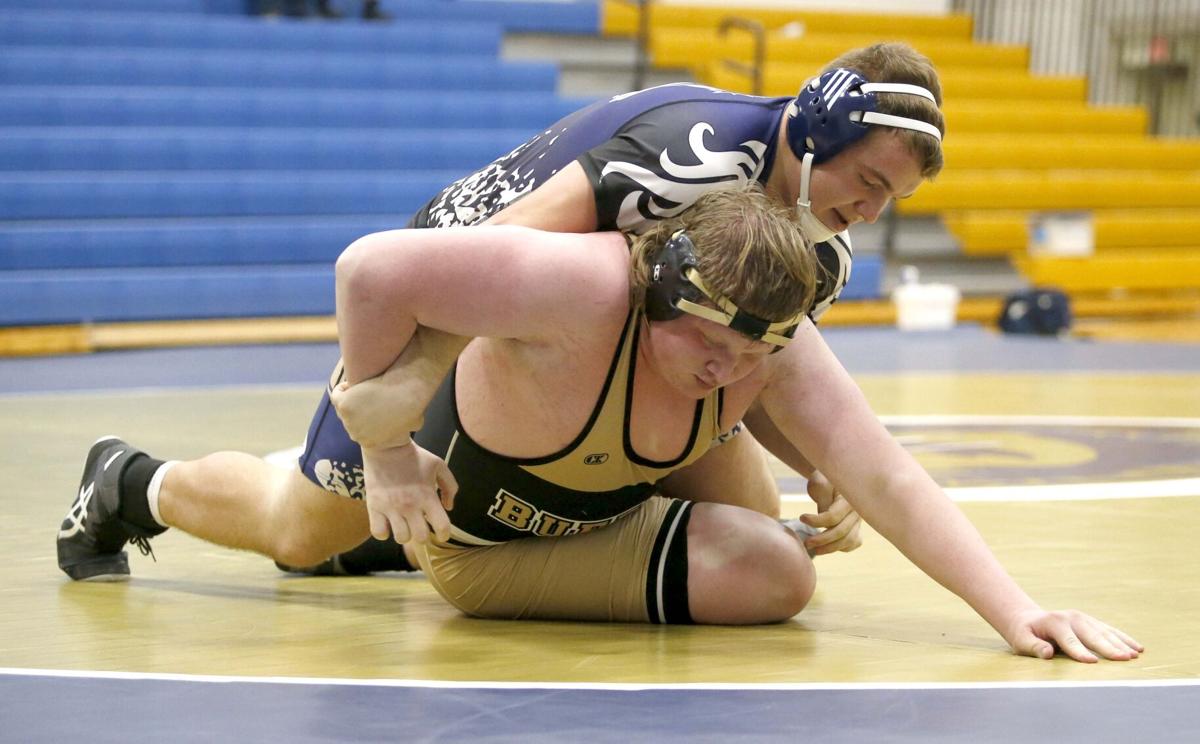 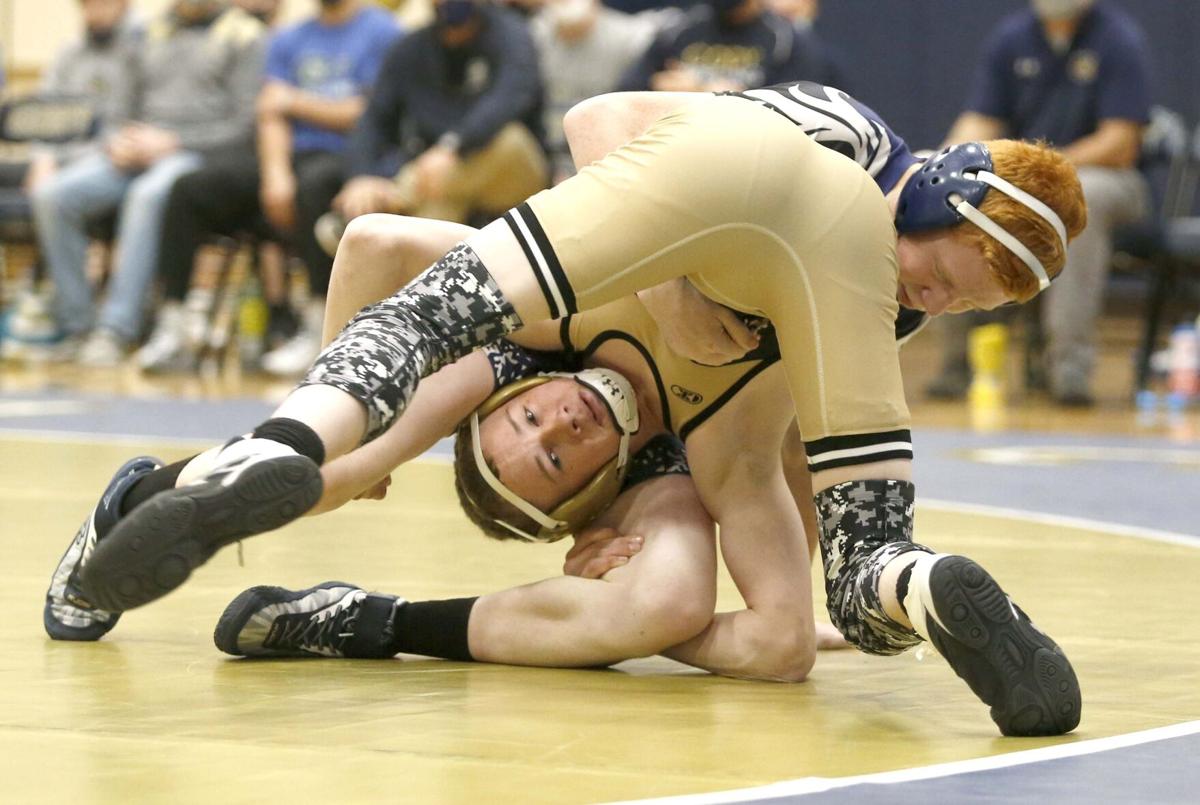 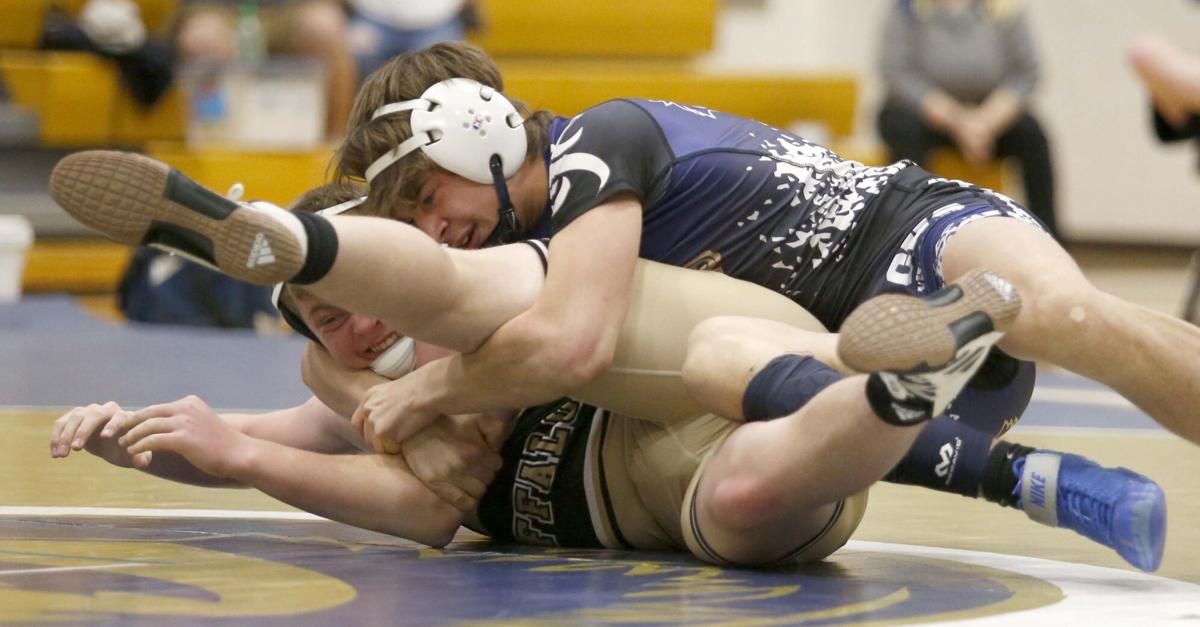 Jackson Wood tries to get Lance Rabel of Buffalo in a cradle at 160 pounds. 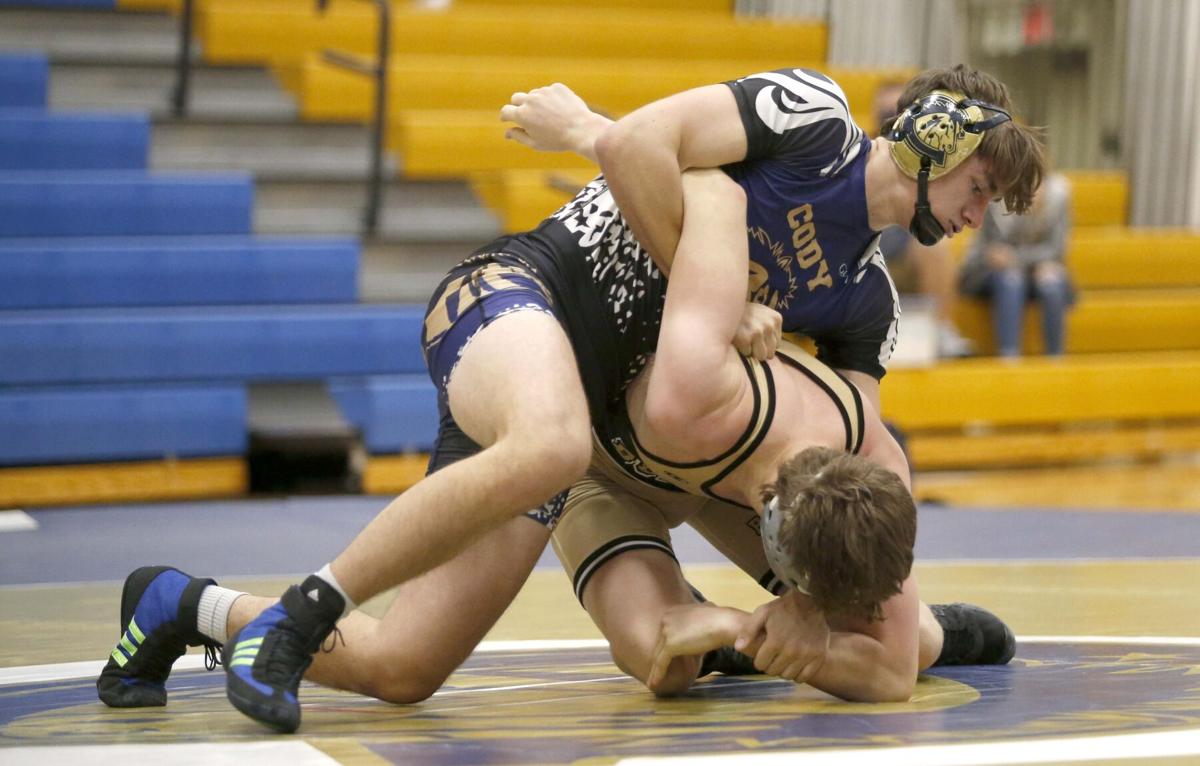 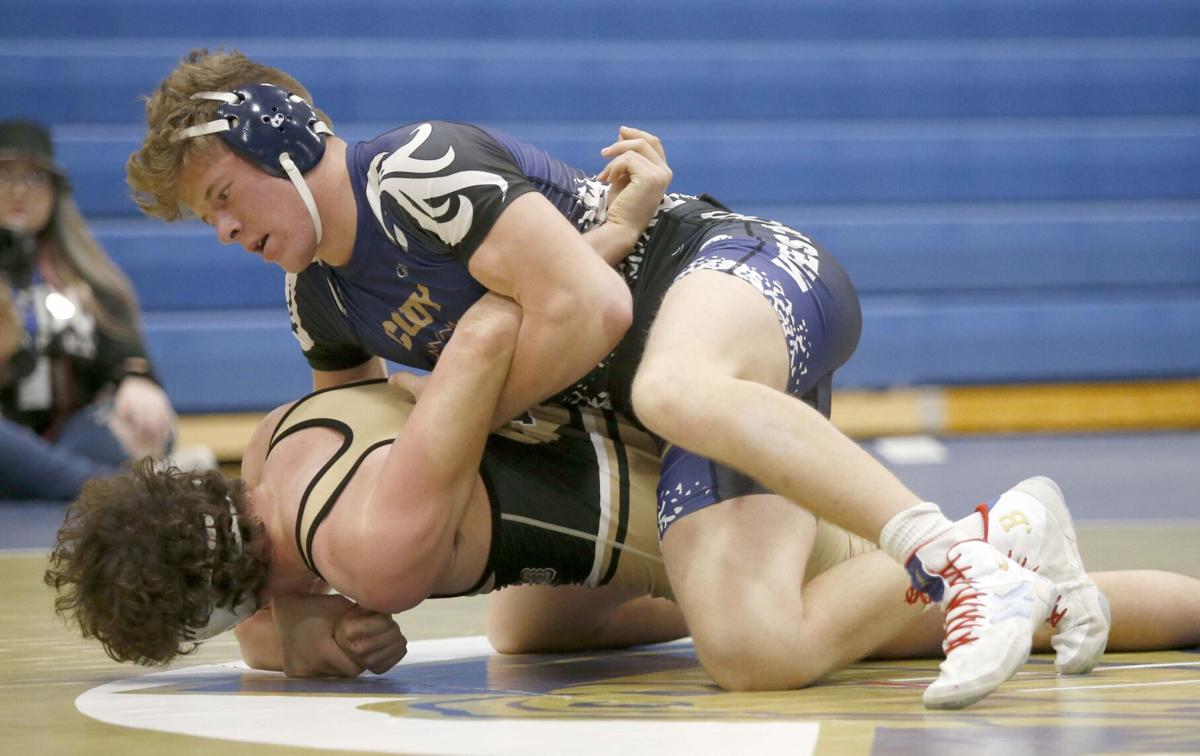 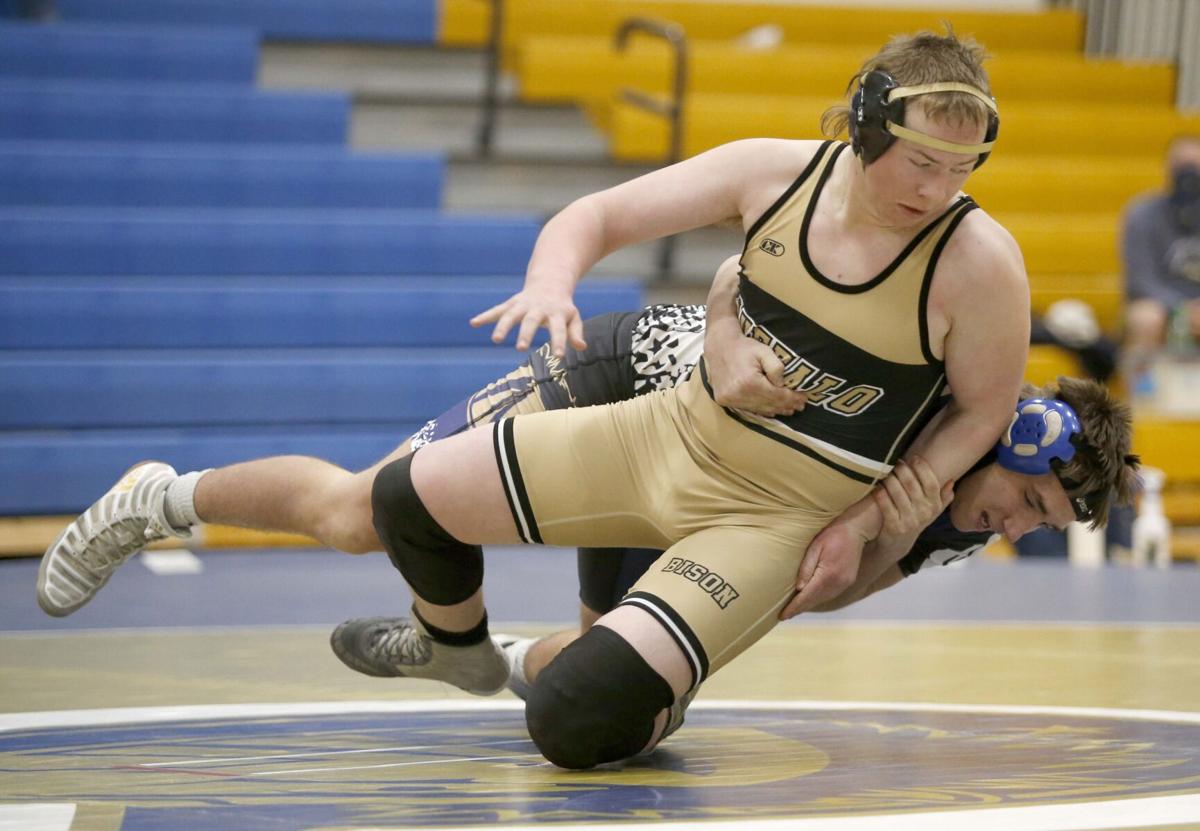 Collin Lindemann brings down Miles Packard of Buffalo at 195 pounds. 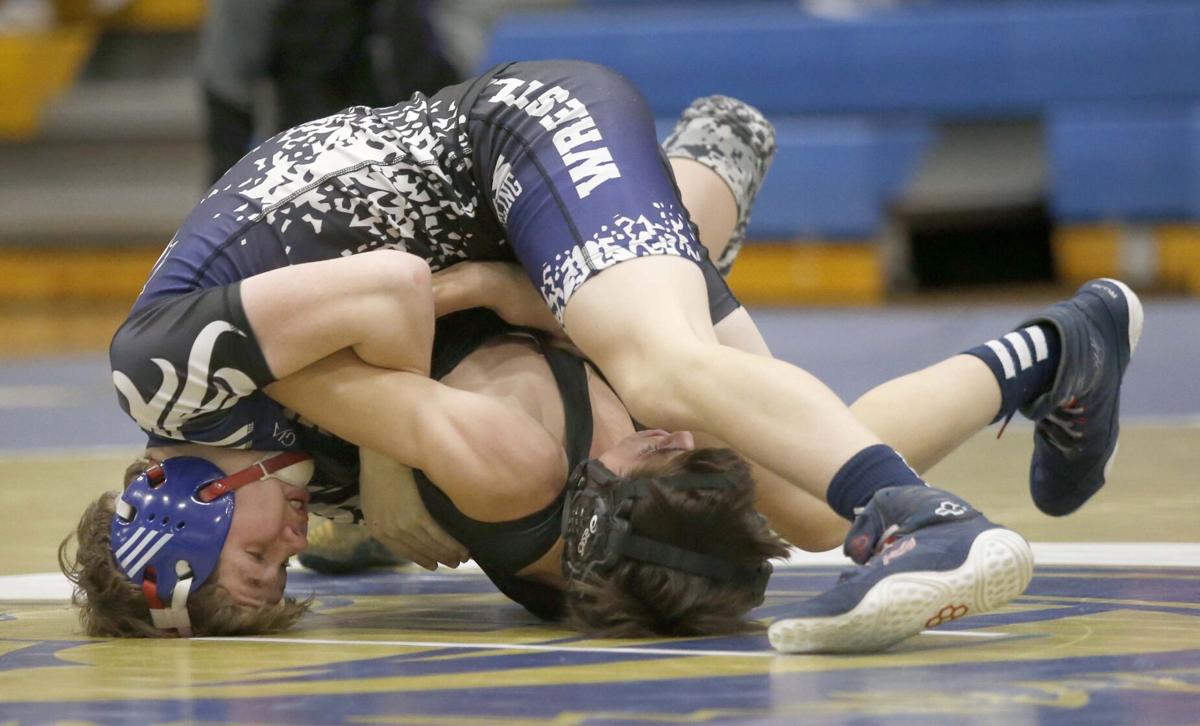 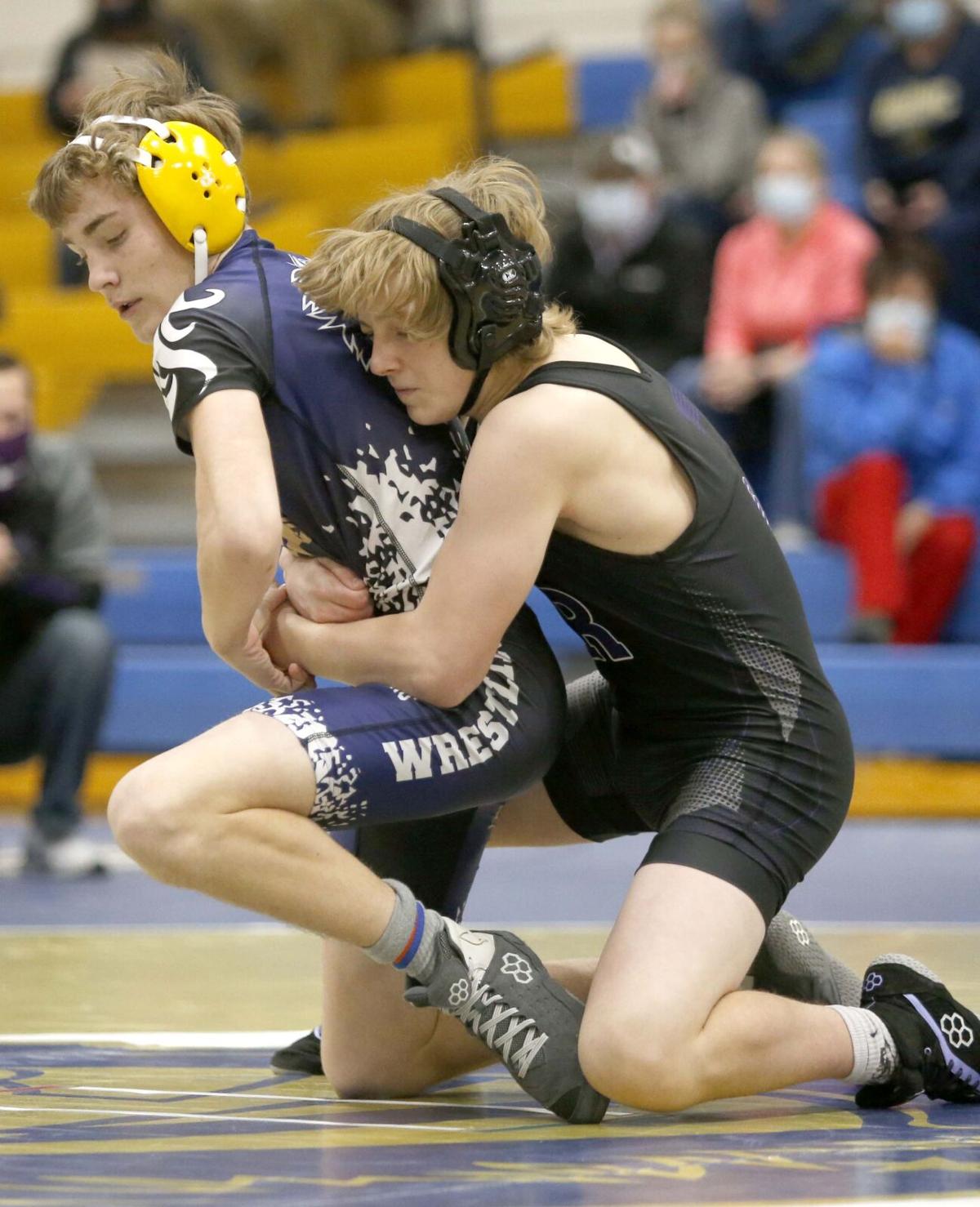 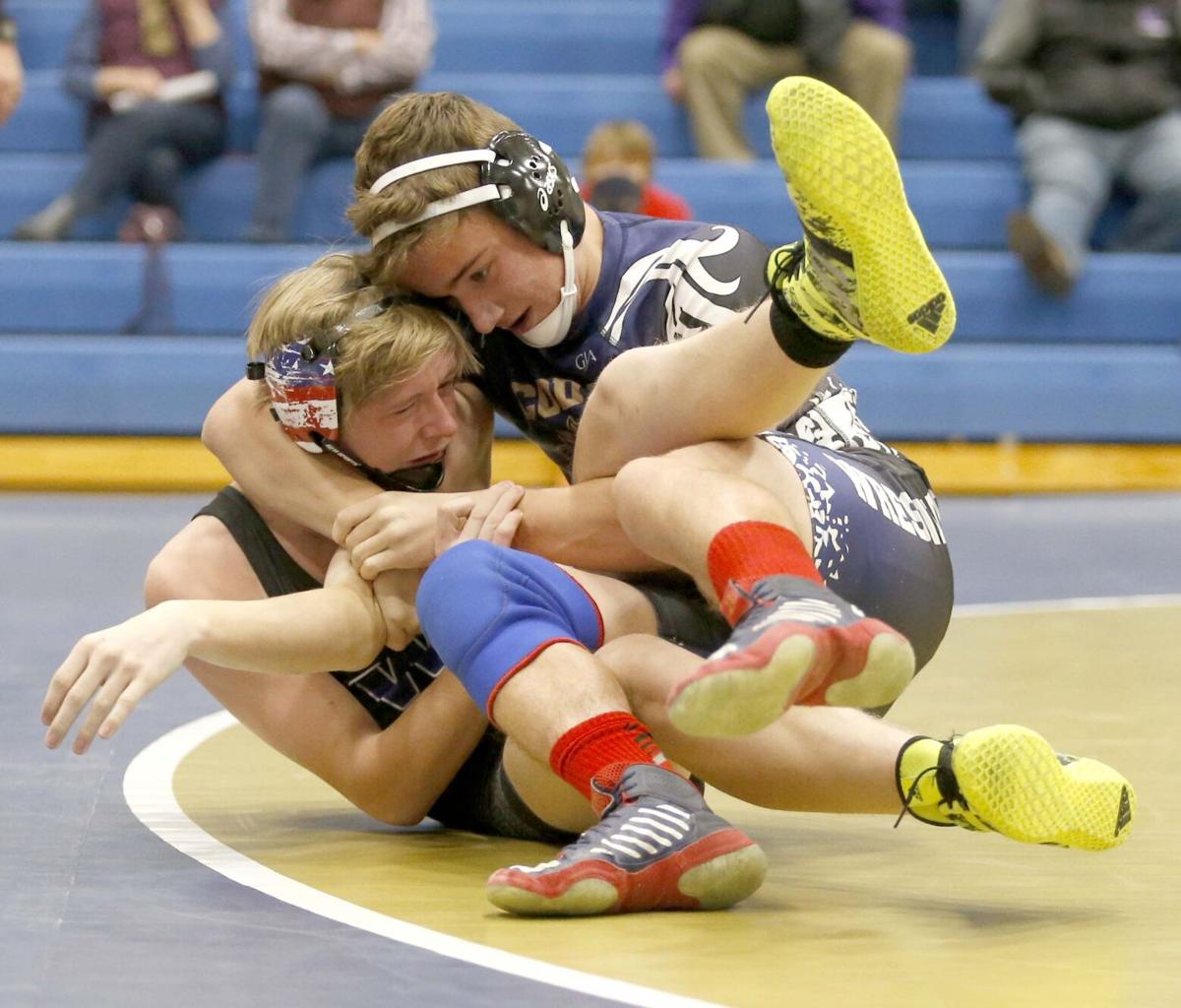 Micah Grant wraps Shawn Reid in a cradle at 132 pounds. 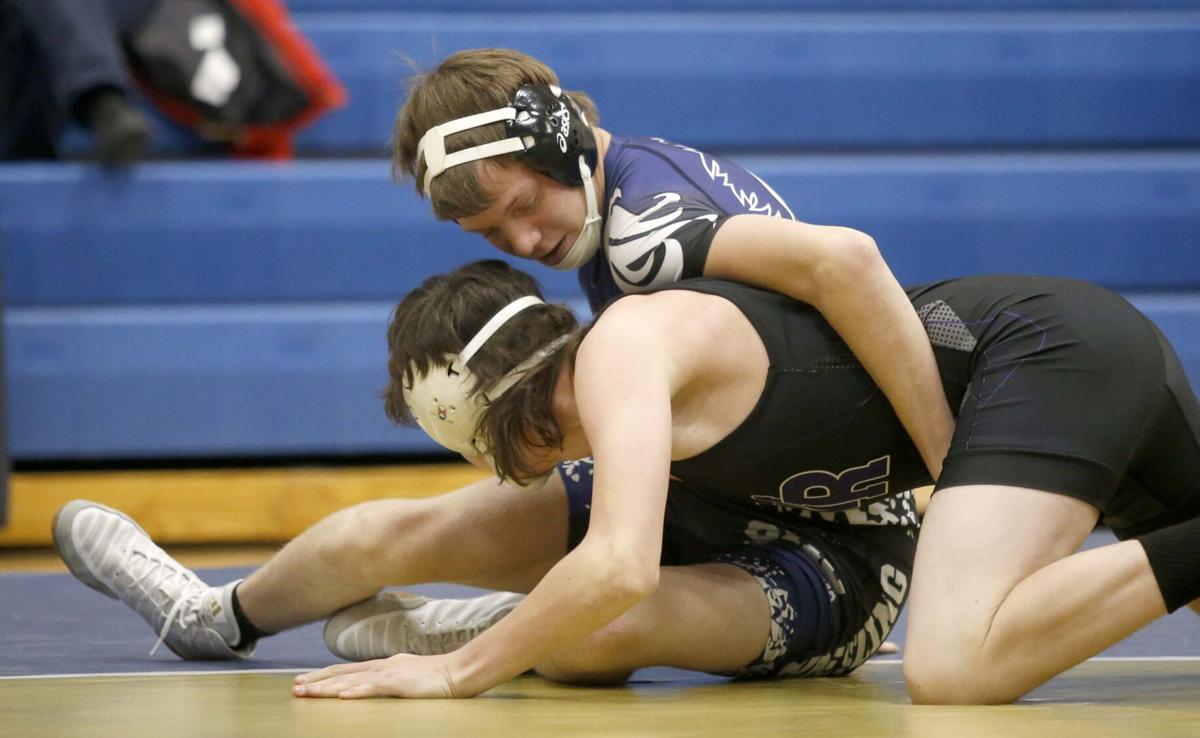 Jackson Wood tries to get Lance Rabel of Buffalo in a cradle at 160 pounds.

Collin Lindemann brings down Miles Packard of Buffalo at 195 pounds.

Micah Grant wraps Shawn Reid in a cradle at 132 pounds.

“We did phenomenal,” freshman Micah Grant said. “We’ve improved from our first few duals and are using the moves we’re working on in practice.”

Coach Trev Wood said the Broncs wanted to come out aggressive and they did just that, with only two matches making it out of the first period in the first dual against Buffalo.

“We got after them,” he said. “We wanted to attack in the first 10 seconds, hoping it would lead to a takedown.”

The strategy worked, as Cody had nine wins by fall and all but one came in under two minutes.

“Buffalo wasn’t aggressive,” Becker said. “I had him in a club and he couldn’t get back up.”

Becker has been giving up a lot of weight against the heavyweights and he continues to cut pounds to reach his 220 goal.

“I mostly focus on not getting in bad position, or making mistakes because then they can use their weight and I won’t get the momentum again,” he said.

Keaton Stone earned the lone decision win, defeating Jace Skovgard 6-2 in a match that was paused multiple times due to a bloody nose for the Buffalo wrestler. Skovgard had the first takedown, but Stone earned a reversal and nearfall to end the period up 4-2. He had another takedown in the second period.

Against Wind River, all of Cody’s victories came by fall.

“It helps my confidence and strength to wrestle the big guys,” Becker said.

“I thought the second match was better because he challenged me more,” Grant said. “It felt good to win both after I lost the few matches before this. It was nice to get back at it again, and I just worked the moves I’m solid in.”

“We looked all right, but some simple mistakes cost us,” Wood said. “We need to stay in great position and take opportunities to score. We’ll turn it around, learn from it and move on.”

On Friday the Broncs traveled to Basin to take on Lovell and Greybull. Cody defeated Greybull 54-26 and Lovell 48-36.

“I feel the rest of the team did really well,” Ben Hogan said. “Most all of us went out there and did the best we could and we all really did well. Overall it was a really good week of wrestling for the team.”

“We had a lot of great performances this week,” Wood said. “It all started with Ben Hogan working to lose a pound before the duals. We usually get on site an hour before weigh-ins so athletes can lose a little weight if they need to.”

Hogan had 45 minutes to lose the weight.

“I did a lot of jogging and some drill matches with a partner,” Hogan said. “I had a couple layers of clothes on to lose as much water-weight as I could. It felt really good to finally make weight and not have that open spot on our roster.”

“Freshman Ty Peterson pinned an opponent that he has struggled with in the past, so he was pumped to pin William Spam of Lovell in 1:10,” Wood said.

“I felt really just happy to wrestle varsity for the second time,” he added. “Winning those two matches, earning those 12 points and helping us win those two duals made me feel really joyous and accomplished that I did that to help our team out.”

Lovell tied the match with a win at 126, but Grant earned a pin in 36 seconds over Jaden Snyder to regain the lead.

The Bulldogs tied it again after a win at 138, but Cody won the final two matches, with Kale Mickelson (145) pinning Landon Marchant in 3:29 and Deming (152) pinning Aiden Nickolson in 2:59 to secure the victory.