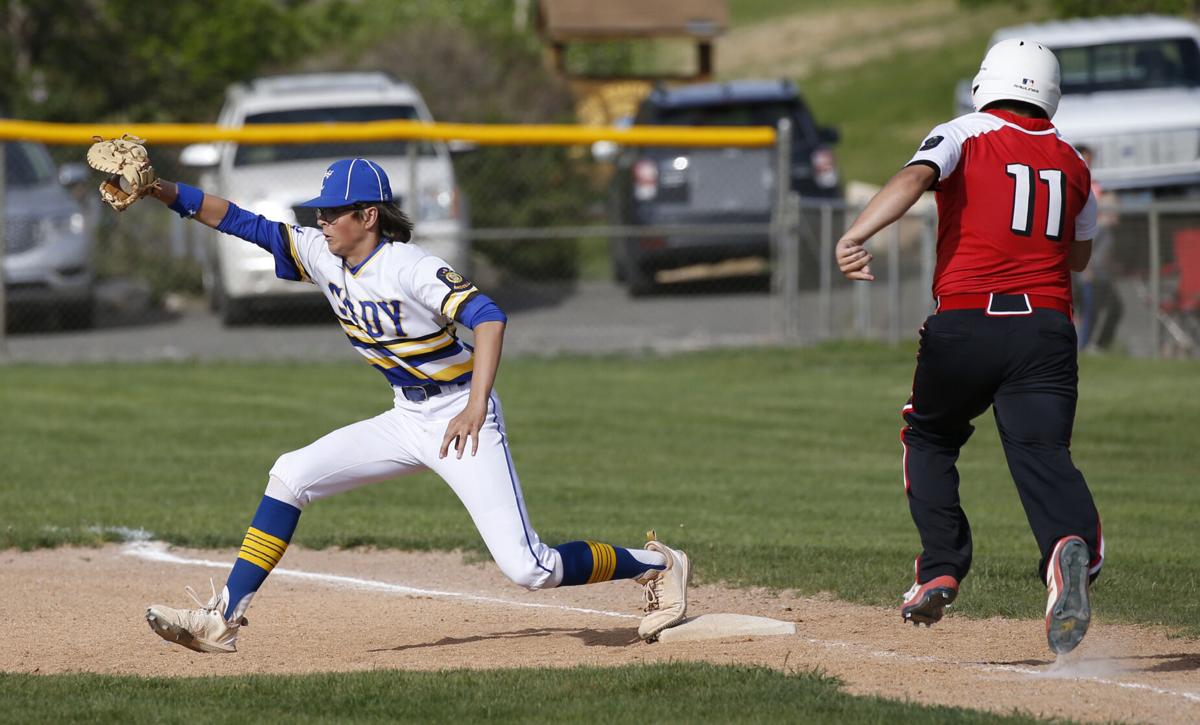 Trey Schroeder gets a put out at first base Tuesday against Lovell.

Trey Thomasson catches a fly ball at the fence in the first game. 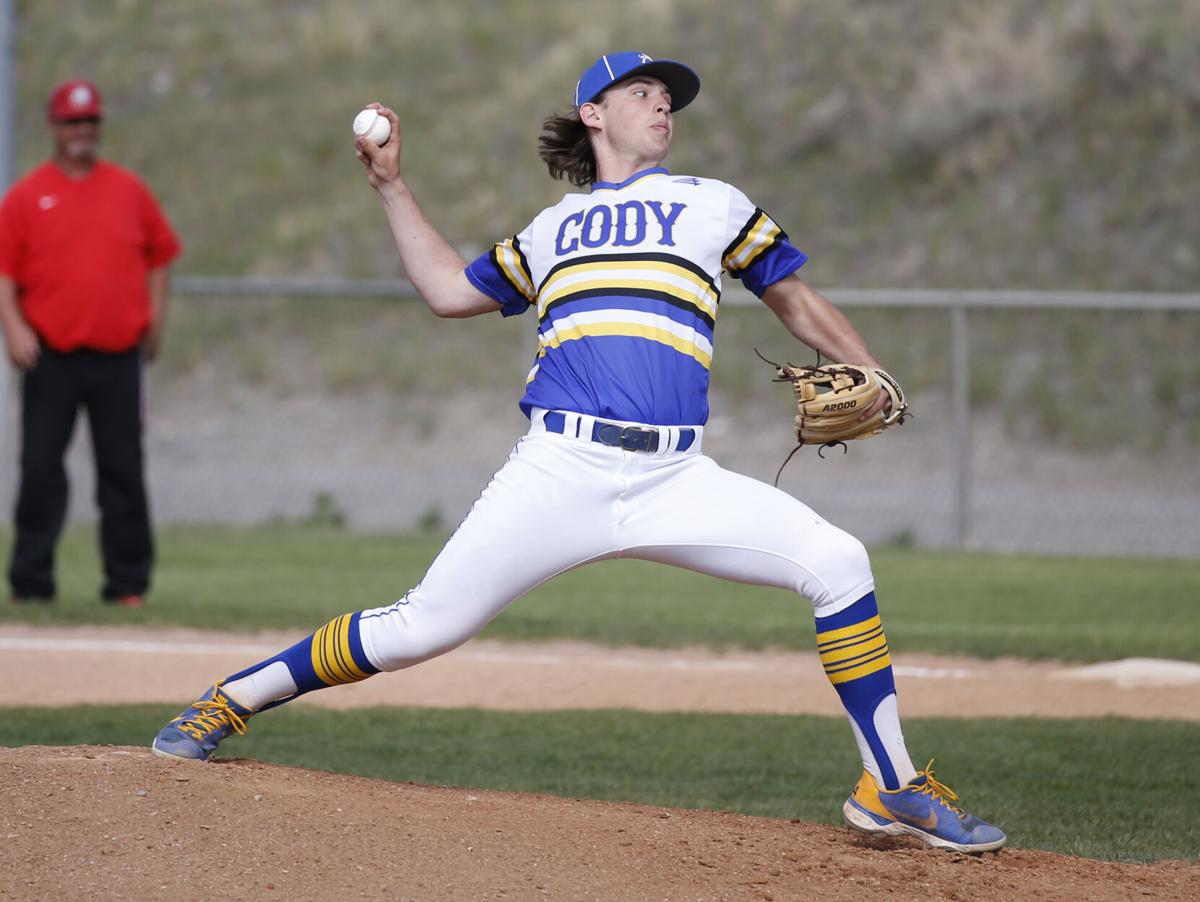 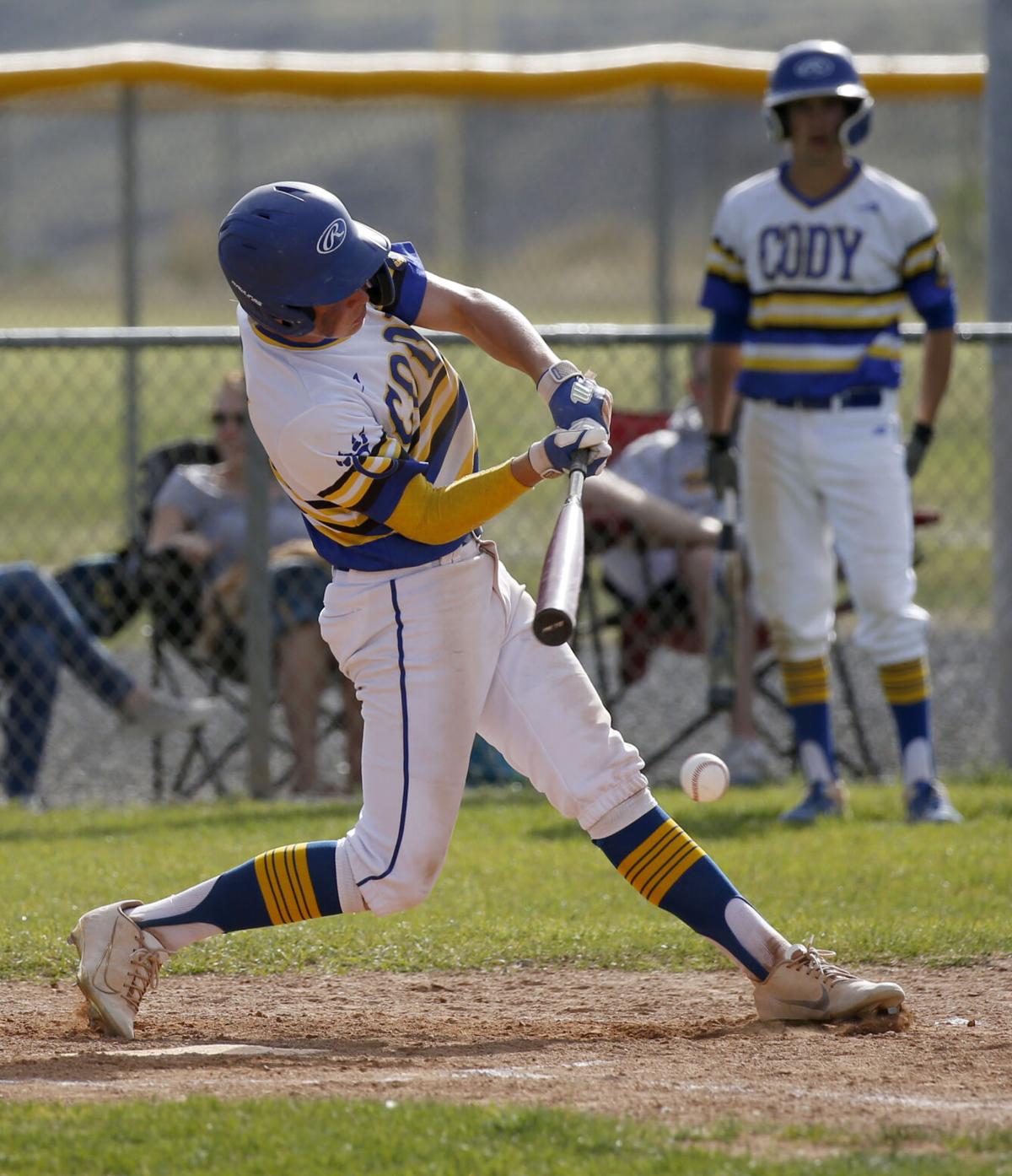 Grady McCarten connects with the ball. 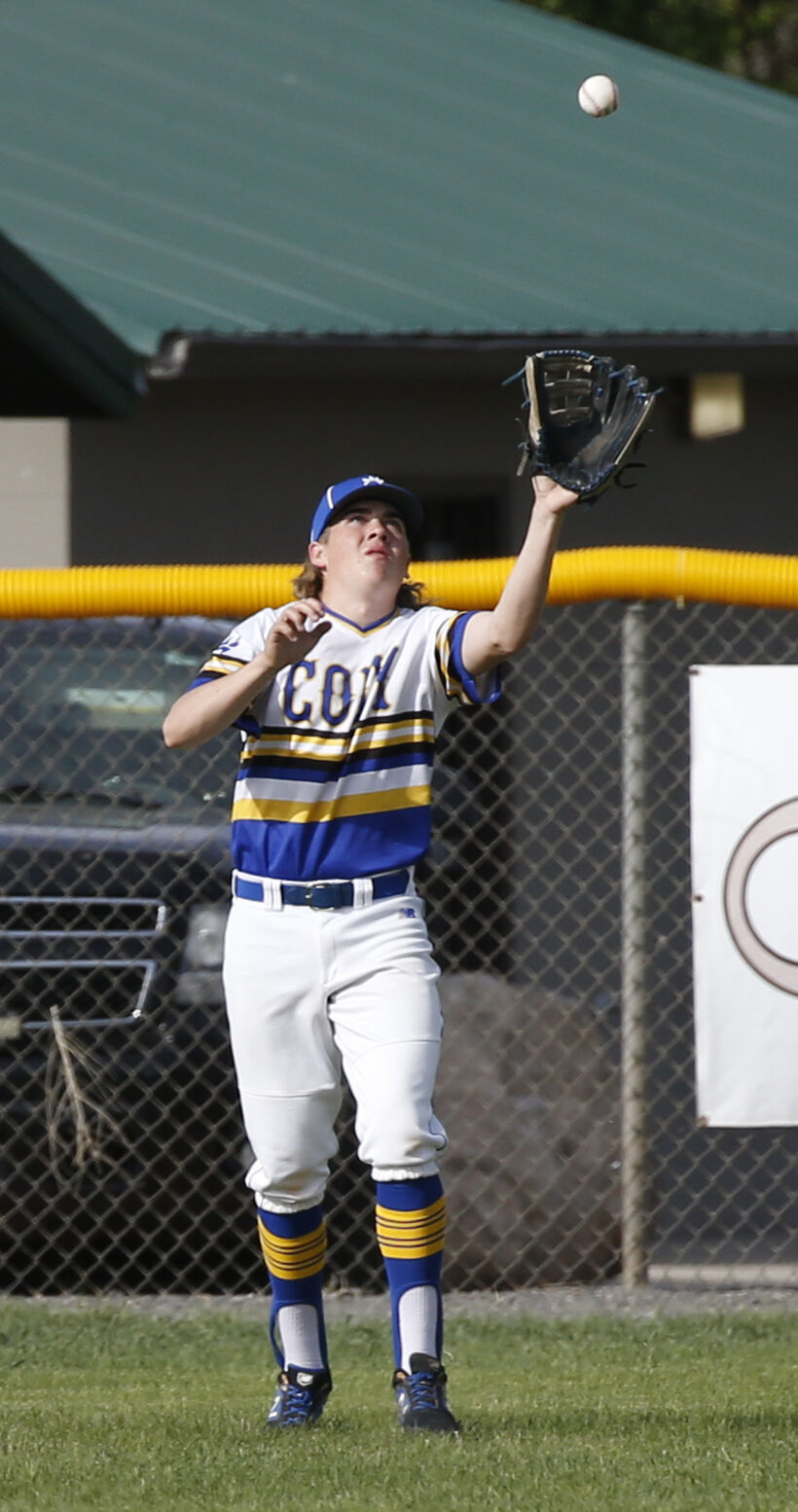 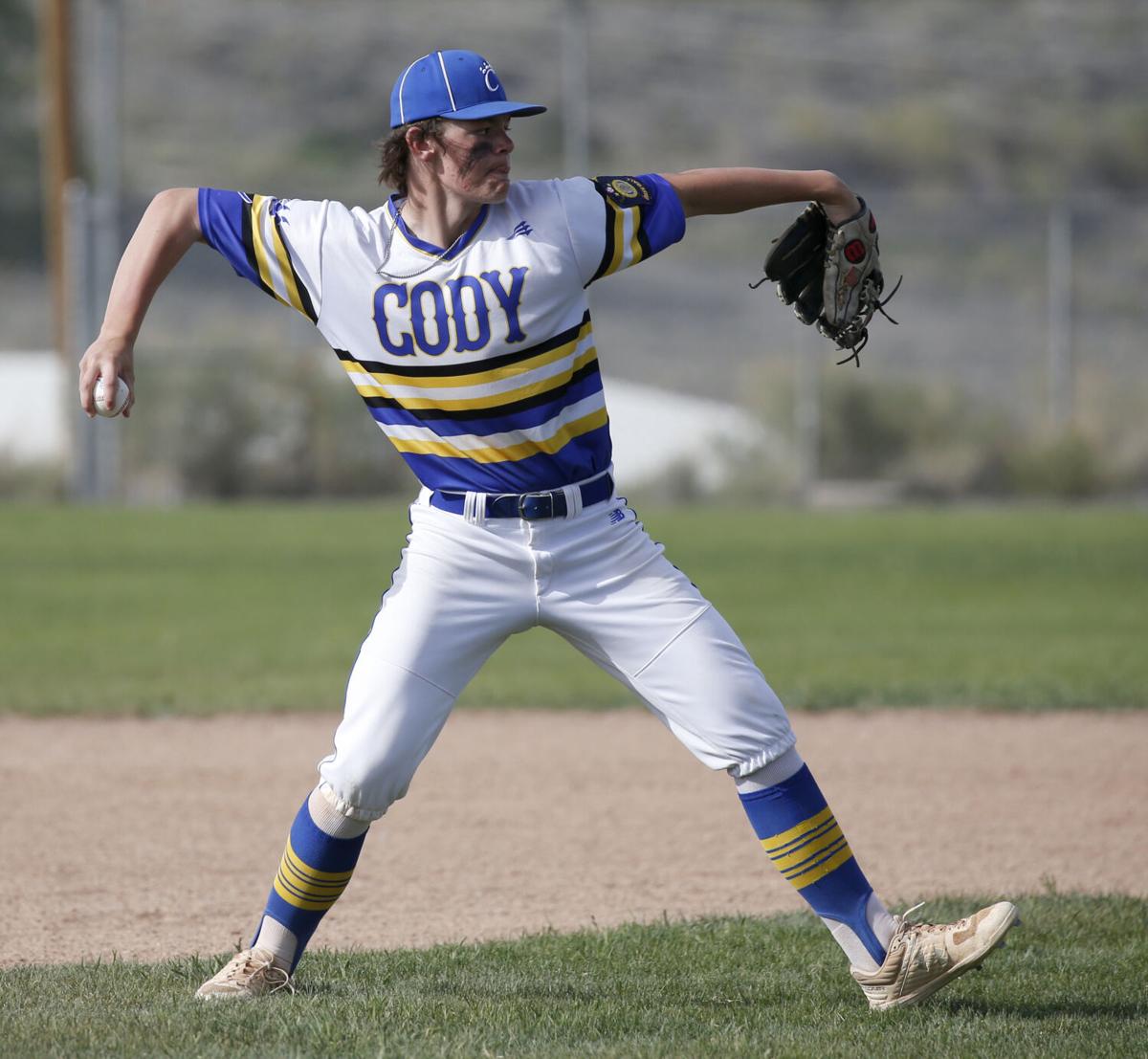 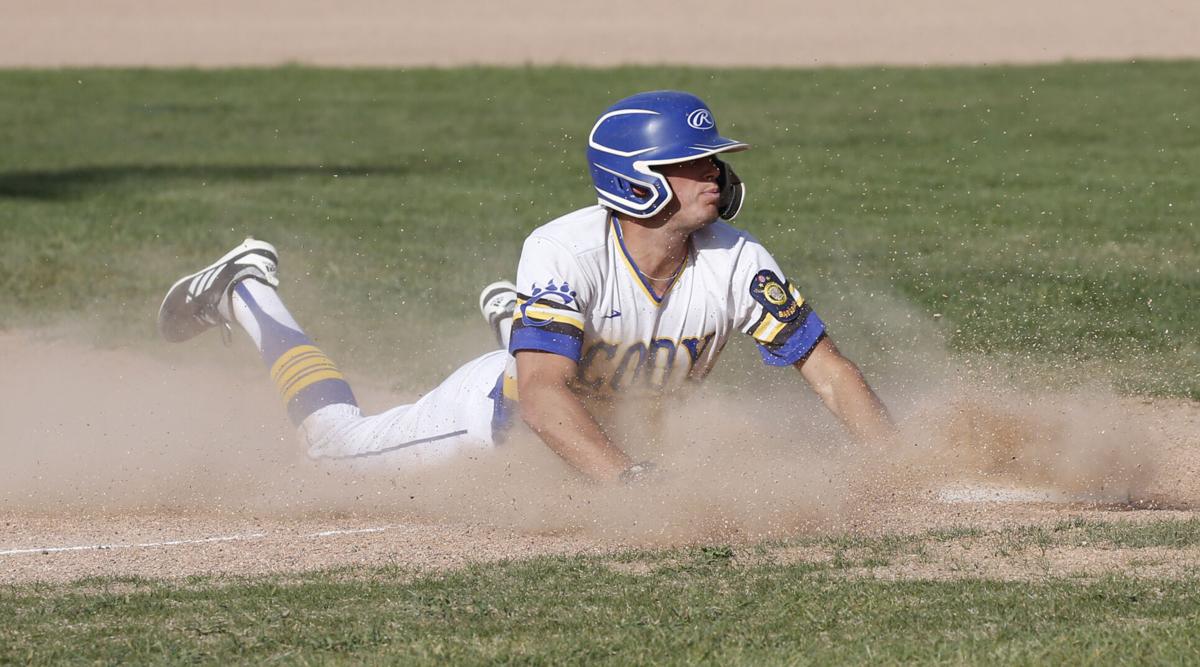 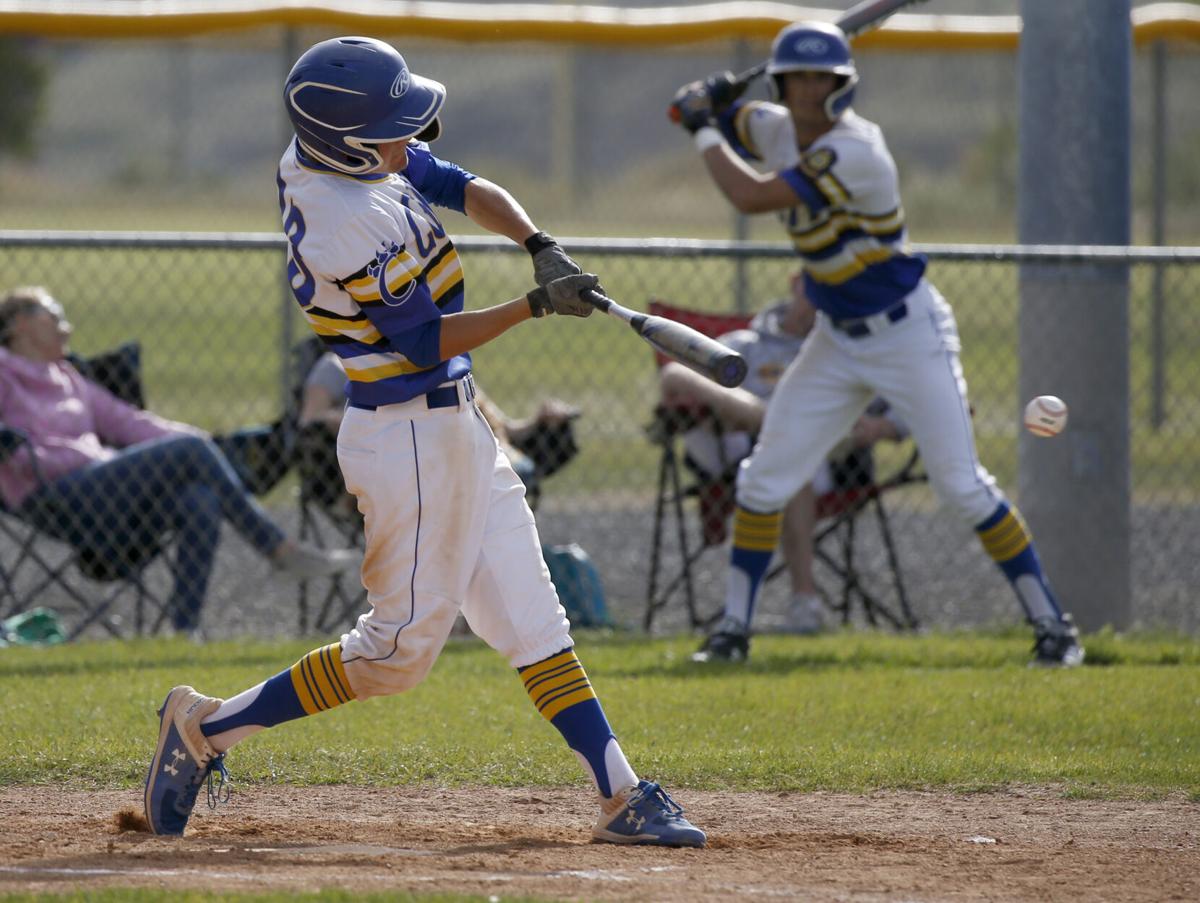 Trey Schroeder gets a put out at first base Tuesday against Lovell.

Trey Thomasson catches a fly ball at the fence in the first game.

Grady McCarten connects with the ball.

The Cubs took a three-day break for graduation and the holiday and assistant coach Beau White thought it had an effect.

“We came out cold and it affected our timing at the plate,” he said. “We weren’t as aggressive as we have been.”

With the wins the Cubs improved to 13-3 overall and 2-0 in conference.

“It was good to get the conference wins and build our confidence,” Trey Schroeder said.

Cody struggled offensively in the first game, but as it has in previous outings this season, used small ball to get things going in the fifth. The Cubs scored four runs in the inning and then held off a late surge by Lovell for the 4-3 win.

“We need to not play to other people’s level,” Devyn Engdahl said. “And the break we had didn’t help us out. We couldn’t string hits together.”

Neither team could build any momentum in the early innings, just one Lovell and four Cody batters reached base, and it remained scoreless after four. Then in the fifth, back-to-back doubles gave the Mustangs a 1-0 lead.

In the bottom of the frame, Trey Schroeder started things off with a bunt and Trey Thomasson drew a walk.

“I saw the third baseman was playing back so I laid one down,” Schroeder said. “Small ball worked for us after not having a big hit.”

After Grady McCarten bunted into a fielder’s choice, Thomasson reached third on an errant pick-off attempt. Ethan Johnston then struck out for the second out of the inning.

With Tristan Blatt up the bat, McCarten stole second and then Blatt hit a single to left that scored both runs. Blatt made it all the way to third on a Lovell error. Another error would make it 3-1 and a single by Engdahl scored the final run.

With two outs in the sixth, Lovell scored two runs on a sac fly and single to make it 4-3. And with two outs in the seventh, the Mustangs again made things interesting. A single and error put runners at first and second before a ground out to third ended the game.

At the plate, Engdahl went 3-for-3 and Blatt and Trey Schroeder 1-3.

Engdahl earned the win, giving up three runs on four hits through 5 2/3 innings. Blatt pitched 1 1/3 innings and allowed one hit for the save.

The Cubs scored in all six innings on their way to a 13-8 win in the second game.

The Mustangs led 4-3 after three innings, with the Cubs scoring one run in each.

After holding Lovell (5-8) scoreless in the top of the fourth, Cody loaded the bases in the bottom of the frame on an error and singles by Johnston and Wyatt Carlson. Blatt was hit by a pitch to tie the game and a walk gave Cody the lead.

Engdahl hit a single to score two more. Singles by Chance Moss and Trey Schroeder made it 9-4, with the final run scoring on an error.

“We had some timely hits to get things going,” White said. “We had two hits and runs and a bunt in the big inning, and we ran some good at bats.”

Lovell scored one in the fifth but Cody got it back in its half when Jack Schroeder hit a two-out homer to left.

With two on in the sixth, Trey Schroeder scored on an error and Ben Reinker on a single.

Cody struggled to get out of the final inning after the Mustangs hit two singles and scored a run on a fielder’s choice. After a walk, one run scored on a passed ball and another on an error before Cody shut things down.

“We strung hits together and hit the ball harder,” Engdahl said.

McCarten started the game, going 3 innings and giving up four runs on six hits. Thomasson pitched 2 innings and allowed one run on two hits. Chance Moss went 1 inning and gave up three runs on three hits. Trey Schroeder threw three pitches to get all three outs in the final inning.

“I just needed to throw strikes and I did,” Schroeder said. “It was good to get that first out after what had happened. It was cool to get out of it with three pitches.”