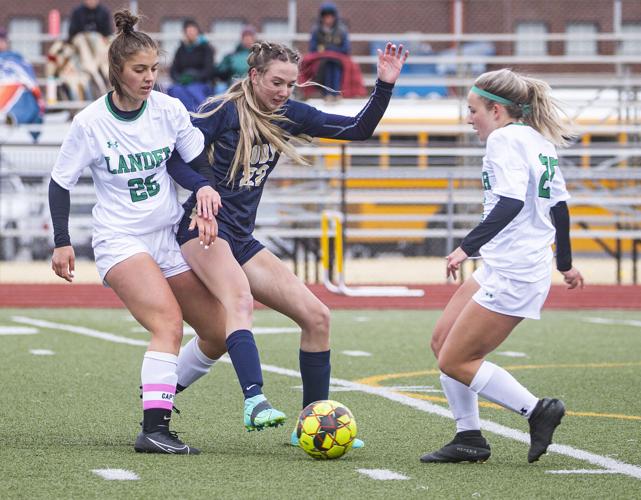 Reece Niemann goes after the ball against Lander on Monday. 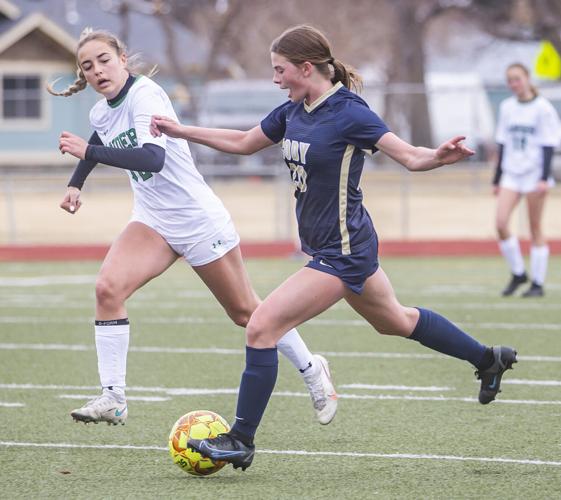 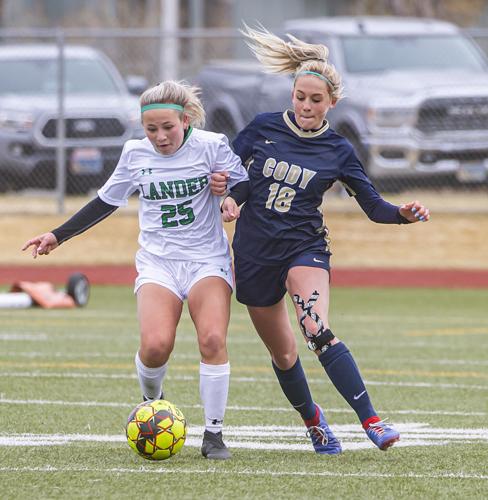 Aspen Kalkowski goes after the ball against Lander on Monday. 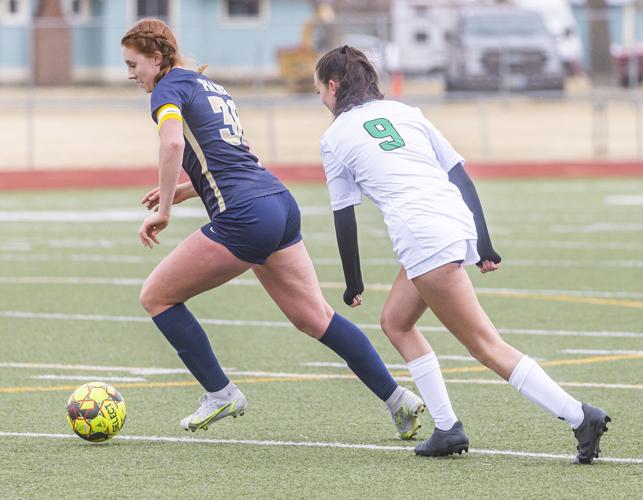 Ally Boysen controls the ball against Lander on Monday. 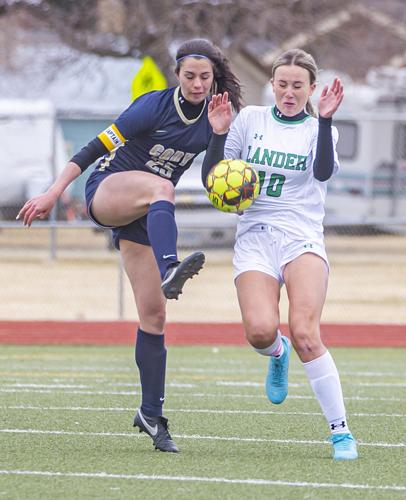 Autumn Wilson kicks the ball against Lander on Monday. 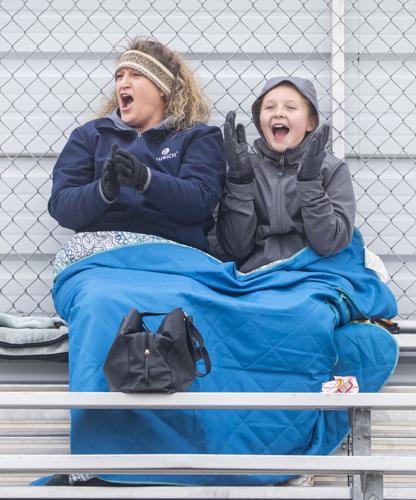 Jamie and Mackinley Nelson, 10, cheer after a Fillies goal against Lander on Monday. 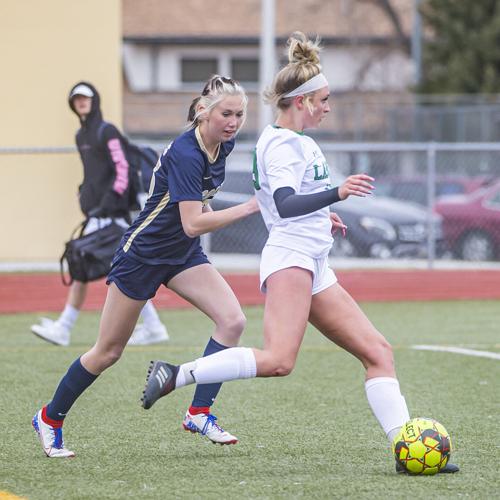 Maddie Christler goes after the ball against Lander on Monday. 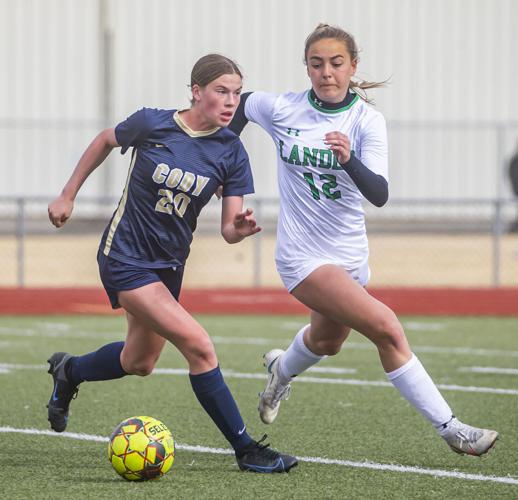 Jessa Lynn runs with the ball.

Reece Niemann goes after the ball against Lander on Monday.

Aspen Kalkowski goes after the ball against Lander on Monday.

Ally Boysen controls the ball against Lander on Monday.

Autumn Wilson kicks the ball against Lander on Monday.

Jamie and Mackinley Nelson, 10, cheer after a Fillies goal against Lander on Monday.

Maddie Christler goes after the ball against Lander on Monday.

Jessa Lynn runs with the ball.

The No. 1 Cody girls soccer team found itself in an unfamiliar position on Monday afternoon.

Facing off against No. 2 Lander in a rematch of last year’s state title game, the Fillies trailed in a game for the first time this season. It looked like it would go the way of the championship with Lander again being victorious, before Cody turned things around in the second half to win 3-1.

“I’ve been thinking about this for 11 months,” coach Marian Miears said. “We were a better team than how we played in last year’s championship and we showed up and proved that today.”

Shorthanded due to injuries and starting goalie Izzy Radakovich being on a college visit, Cody (6-0, 5-0) had to shift some things around. Midfielder Hattie Robbins, who has keeper experience, filled the spot for the Fillies. She was busy in the first half, as Lander (4-2, 3-1) had possession for the majority.

“She didn’t want to do it, but took one for the team,” Miears said. “She did a great job.”

The Lady Tigers boast one of the top forwards in the state in Delaney Sullivan, who used her speed to score on a through ball in the 12th minute.

“She’s super quick and a really good player,” sophomore Molly Hays said. “But I thought that our defense stepped up and we had people back there helping and pinching.”

Cody continued to struggle offensively, not communicating or making accurate passes, while Lander continued to create shot opportunities and pressure the goal. Robbins held strong though, making multiple stops including a diving save and tipping a free kick over the net.

“We didn’t really know what to expect from them and we had a lot of different players in different spots so I think that was an adjustment, but we weren’t connecting passes as well as we expected to,” junior Kennedi Niemann said.

The Fillies finally got a few shots off late in the half, but still trailed 1-0 at the buzzer.

“They were timid and gave the ball right back to them in the first half,” Miears said. “You can’t score if you don’t want the ball.”

Cody looked like a different team in the second half, starting things off with a shot by Natalie Wenke to the keeper and one by Autumn Wilson that went over the net.

The Fillies kept the shots coming and Lander’s Kyleigh Balderston made some nice saves in the first 20 minutes of the half.

Finally in the 62nd minute, a corner by Ally Boysen was tapped by Anessa Etter over to Niemann, whose shot between defenders into the left side tied the game.

“I kind of just happened to be there and the one that touched it in,” Niemann said. “Honestly credit to Anessa that she even got the touch off that corner. I think I was just in the right spot at the right time.”

Cody’s momentum continued. A short time later Hays had a shot go off the top post, her second of the game. Hays tracked down the ball on the next play and brought it up the right side. She crossed it over to Wenke who kicked it passed a diving goalie to make it 2-1 in the 68th.

Lander had a couple more opportunities, including a free kick and breakaway opportunity where Sullivan collided with Robbins, but couldn’t find the net.

It was a rough game, as Lander is one of the more physical teams the Fillies face and both teams had players called off to clean up bloody scrapes and scratches multiple times during the match.

“We were being physical back, but in a smart way,” Niemann said. “Just pushing back a little bit and just giving them a little bit of tough situations.”

With the offense shut down, the Fillies continued to pressure the Lady Tiger defense and kept the keeper busy.

Cody’s final goal came in the 74th on a left-footed shot from 23 yards out by Boysen that found the left corner.

“Everybody works so hard and when we need spots to be filled there’s people that can step in and do that,” Hays said. “So that’s really cool that everybody can work together and we can be just as good as if we’re (at full strength) and get a win on a really good team.”

Cody hosts Worland on Thursday at 4 p.m. for another conference game.