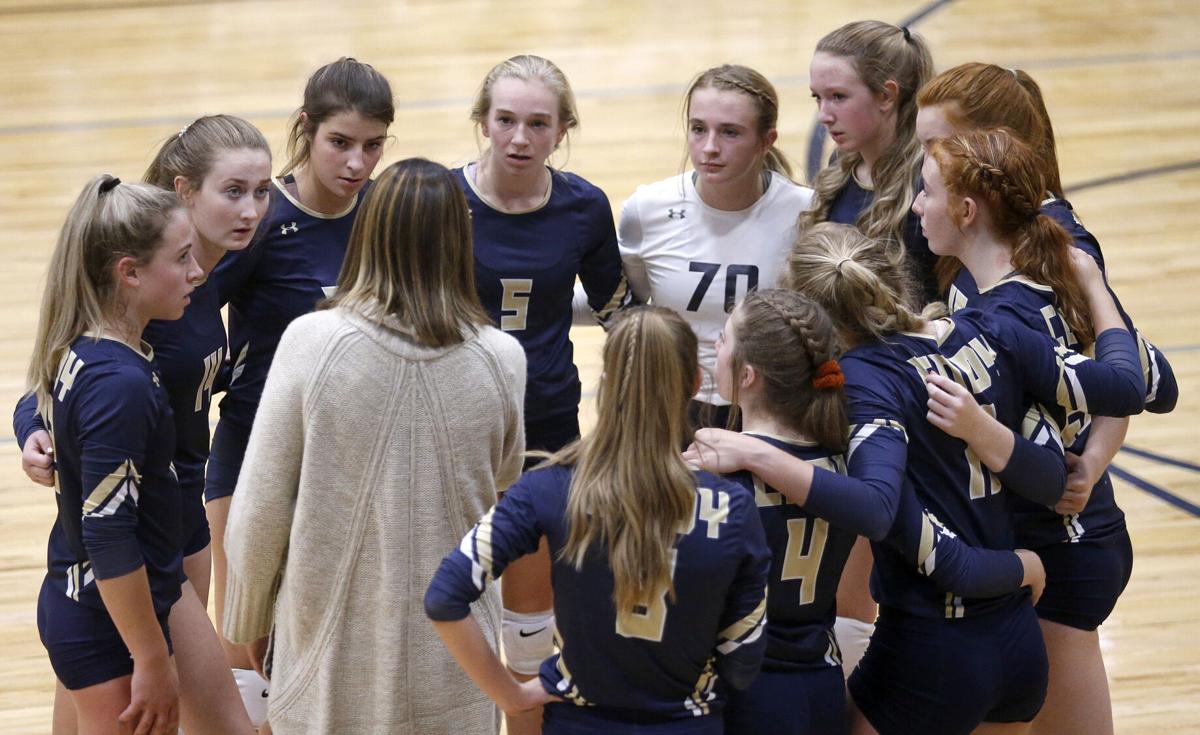 The Fillies listen to coach Stephanie Birch during a timeout. 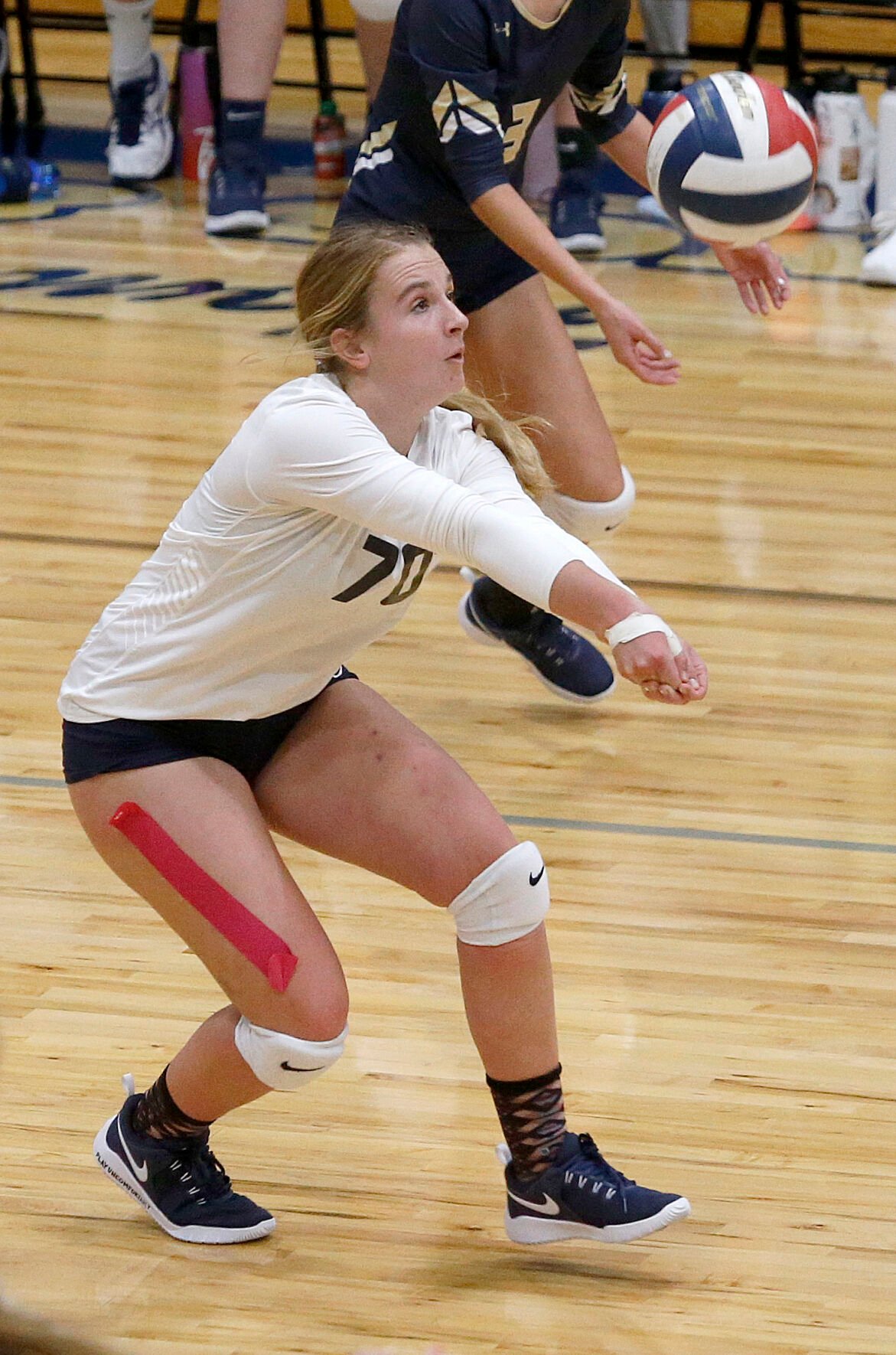 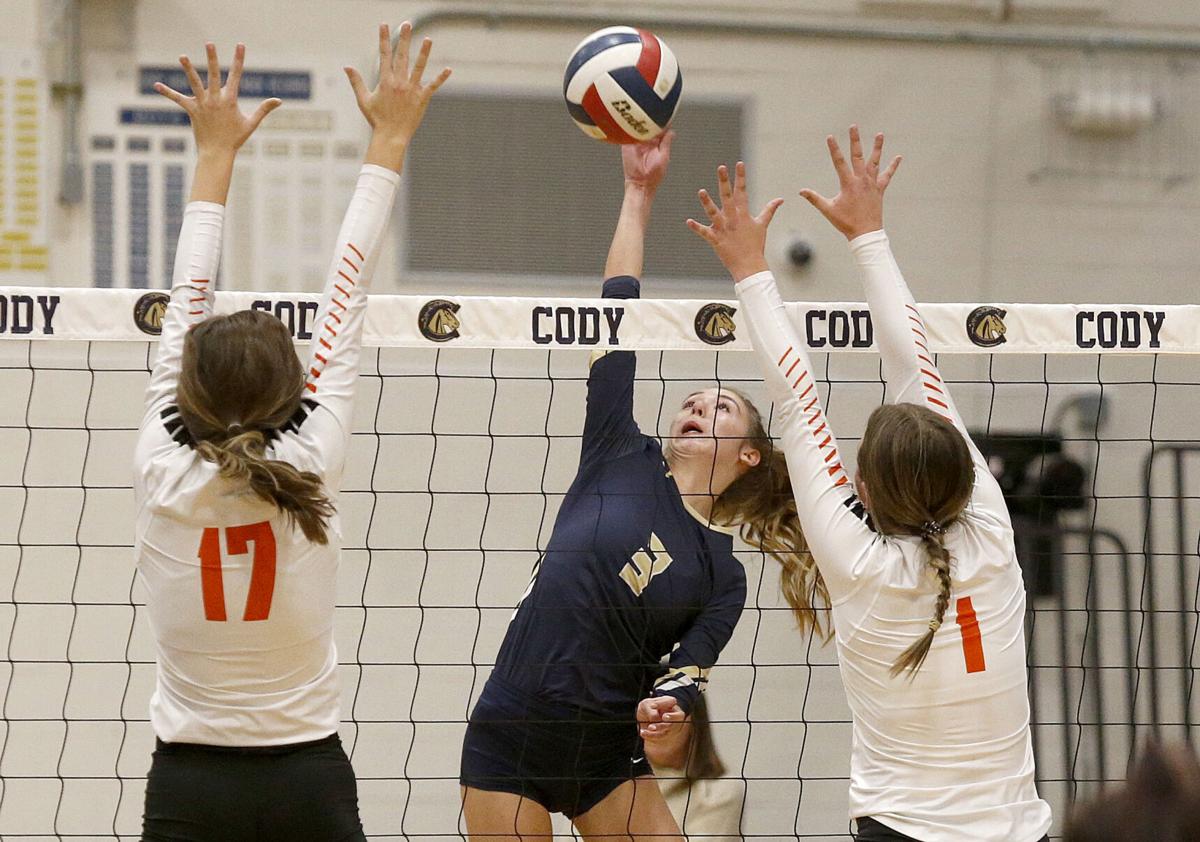 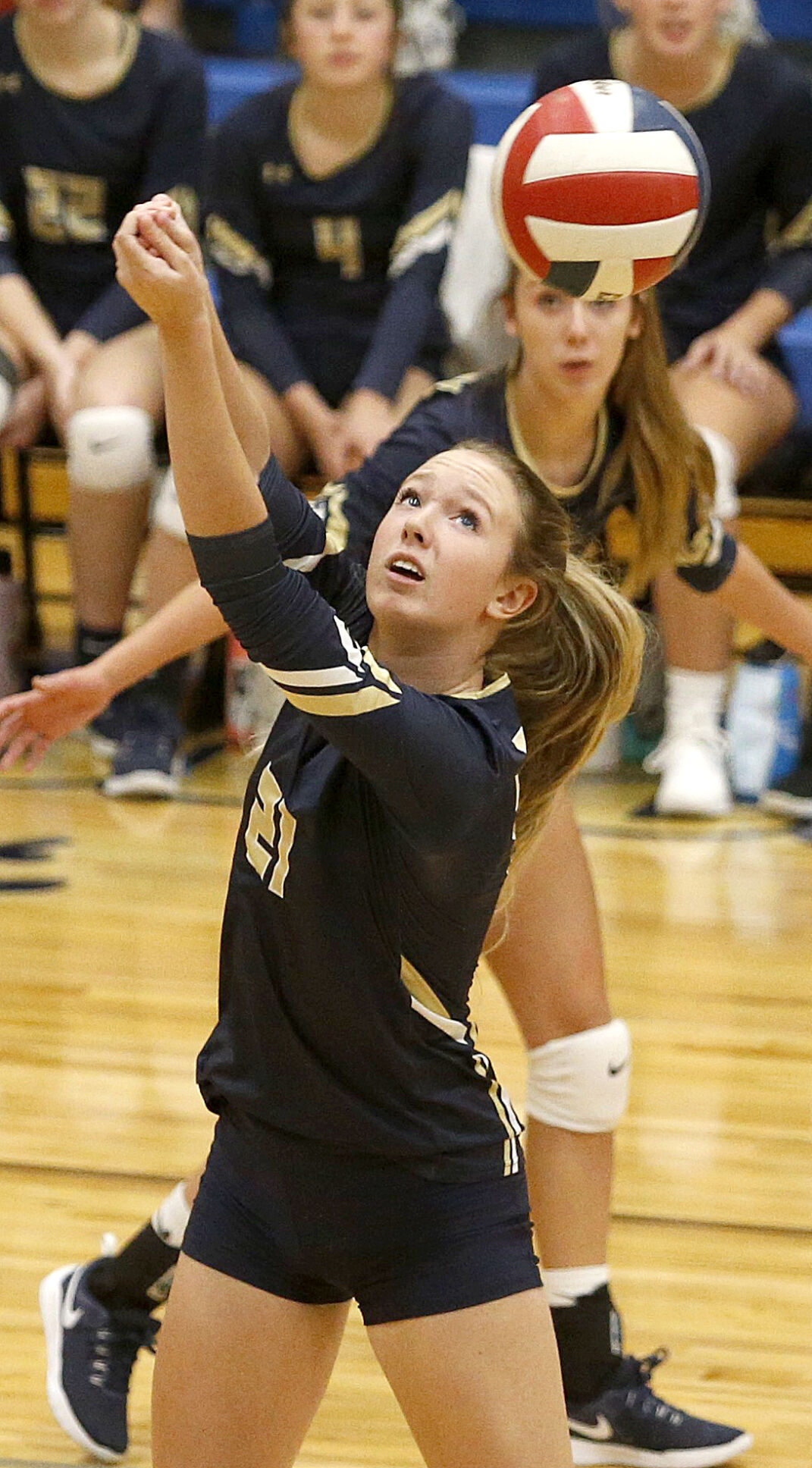 Reece Niemann passes the ball over the net. 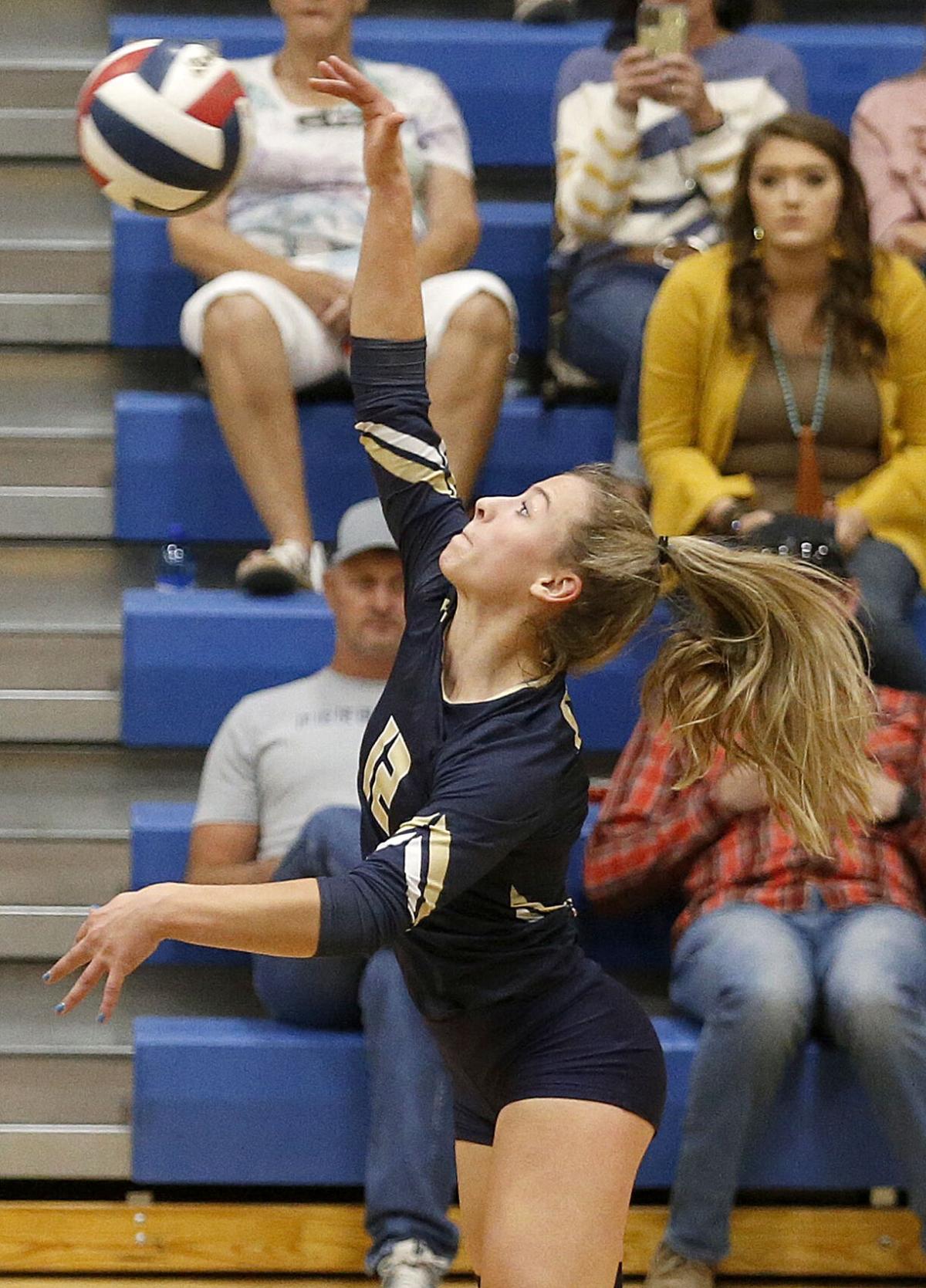 Ava Meier goes for a kill. 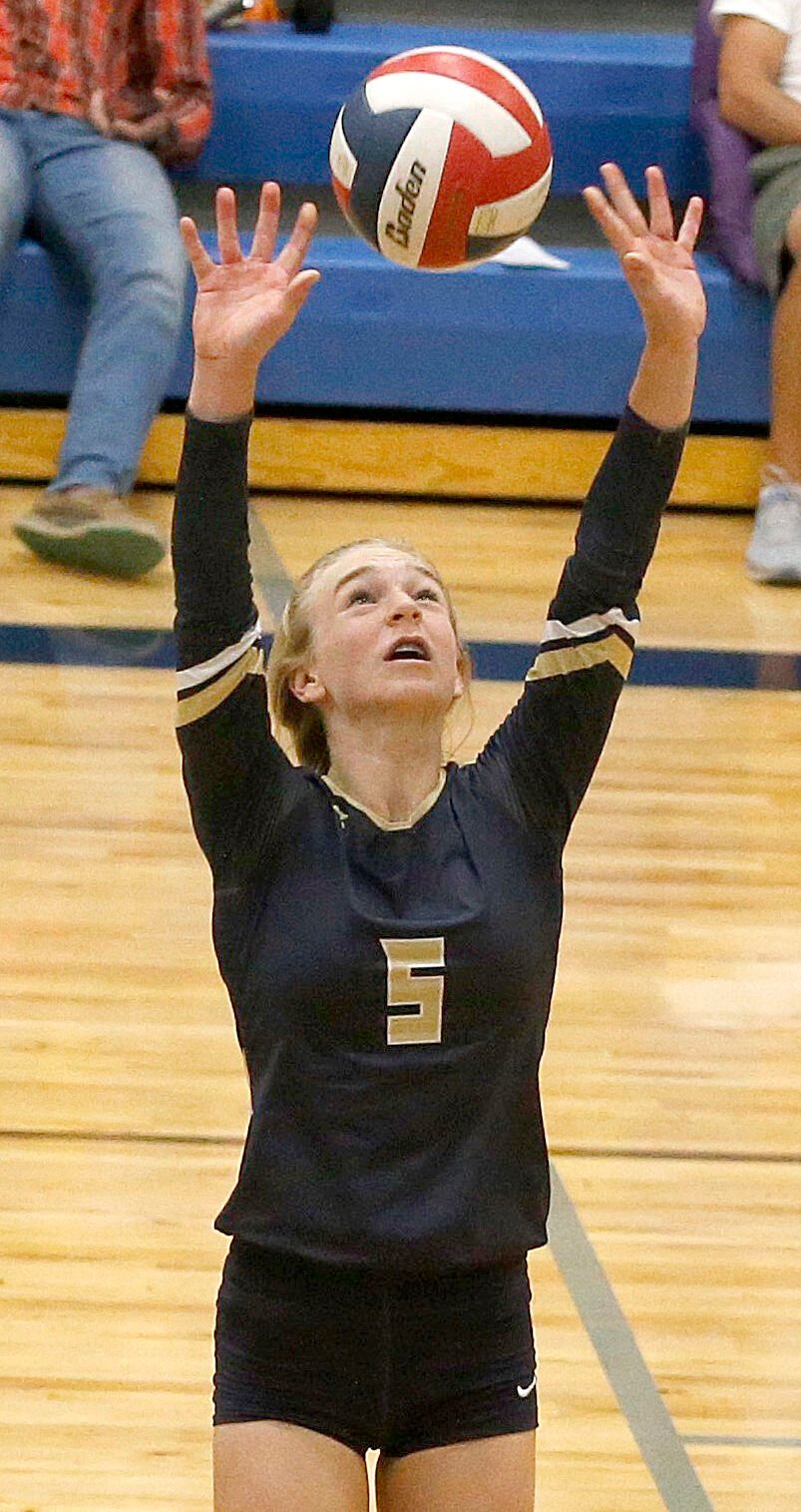 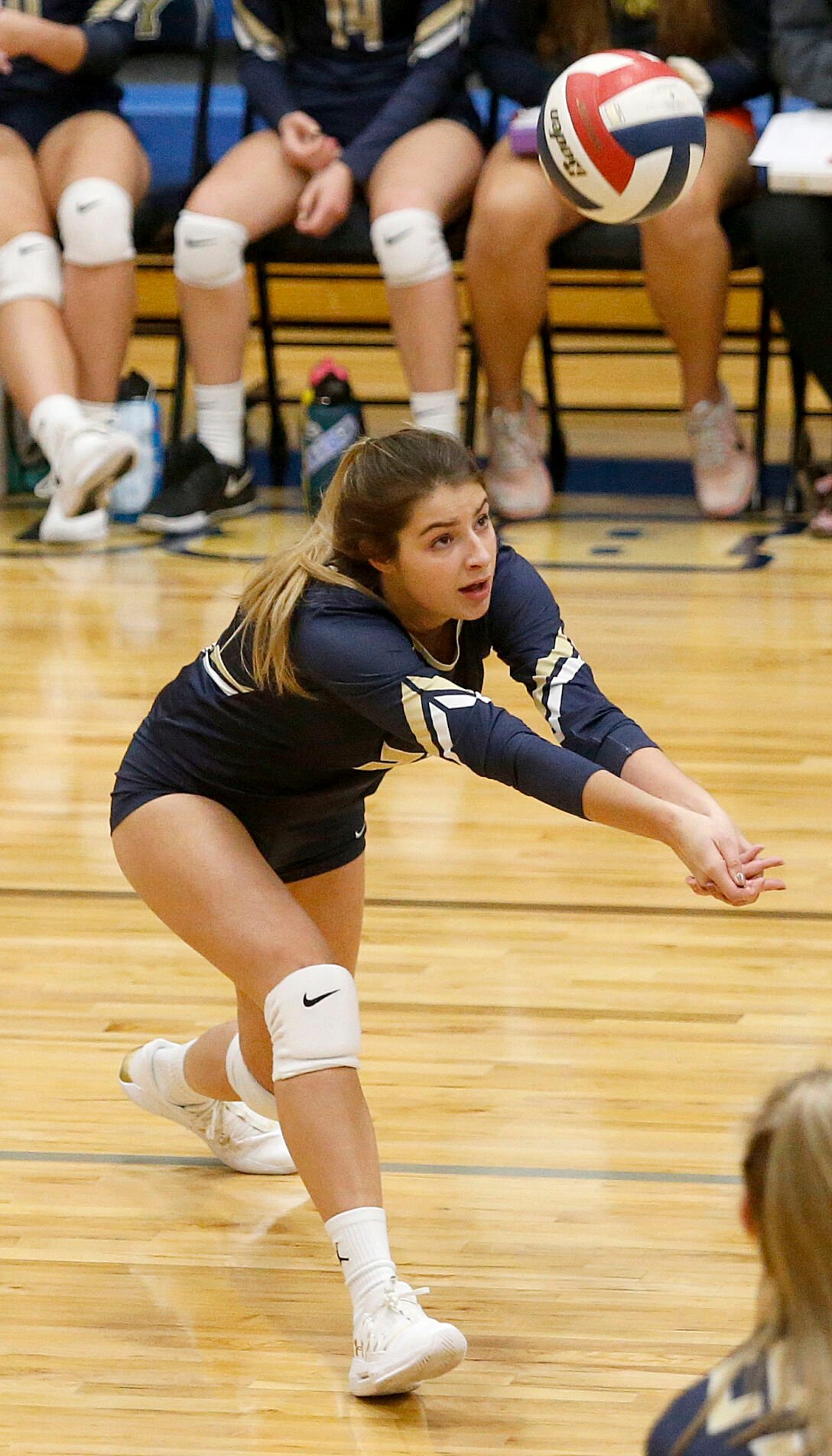 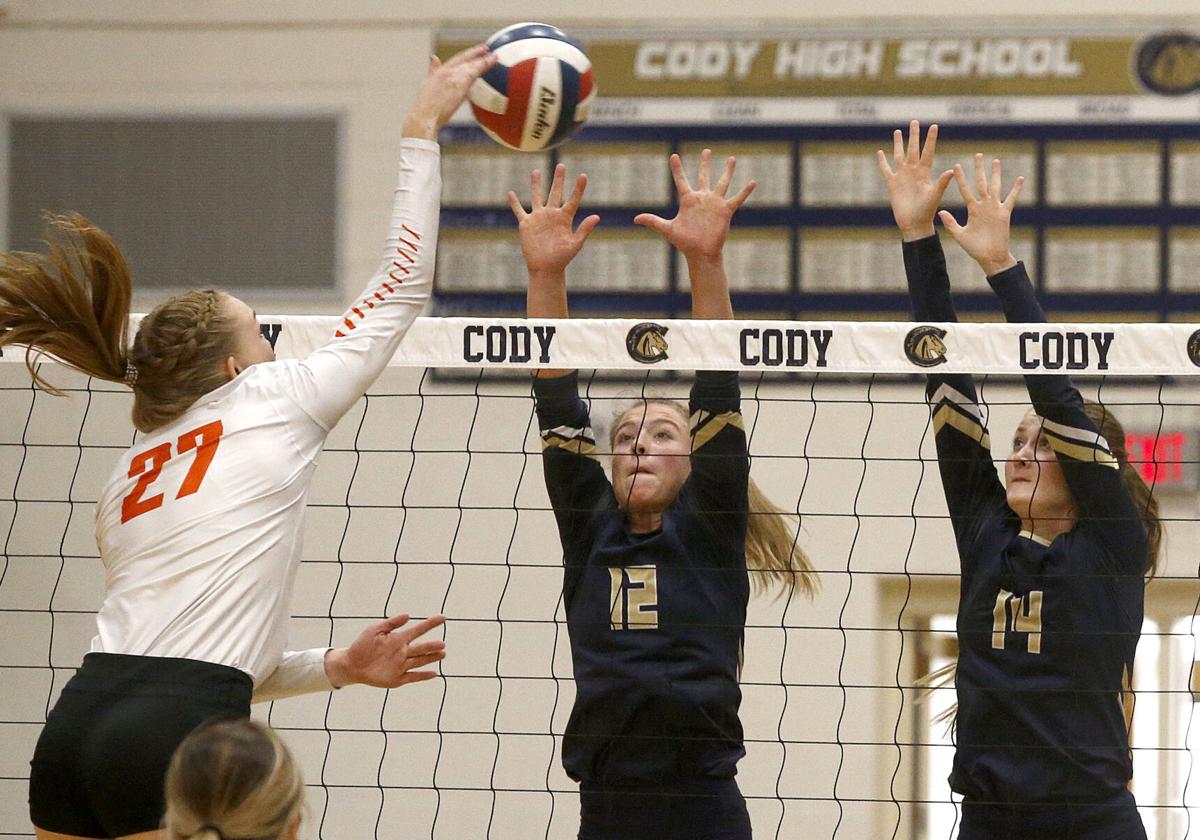 Ava Meier and Lake Harrison go up for a block. 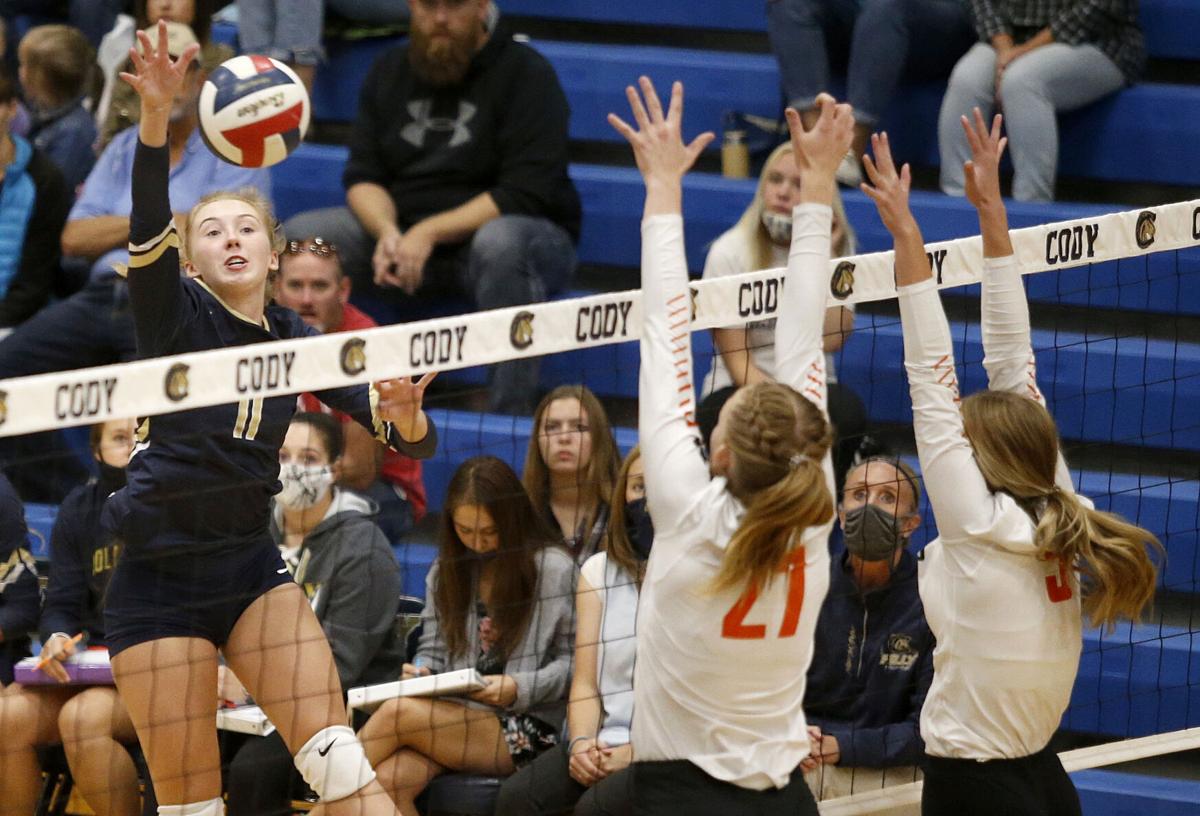 Grace Shaffer tries for a kill. 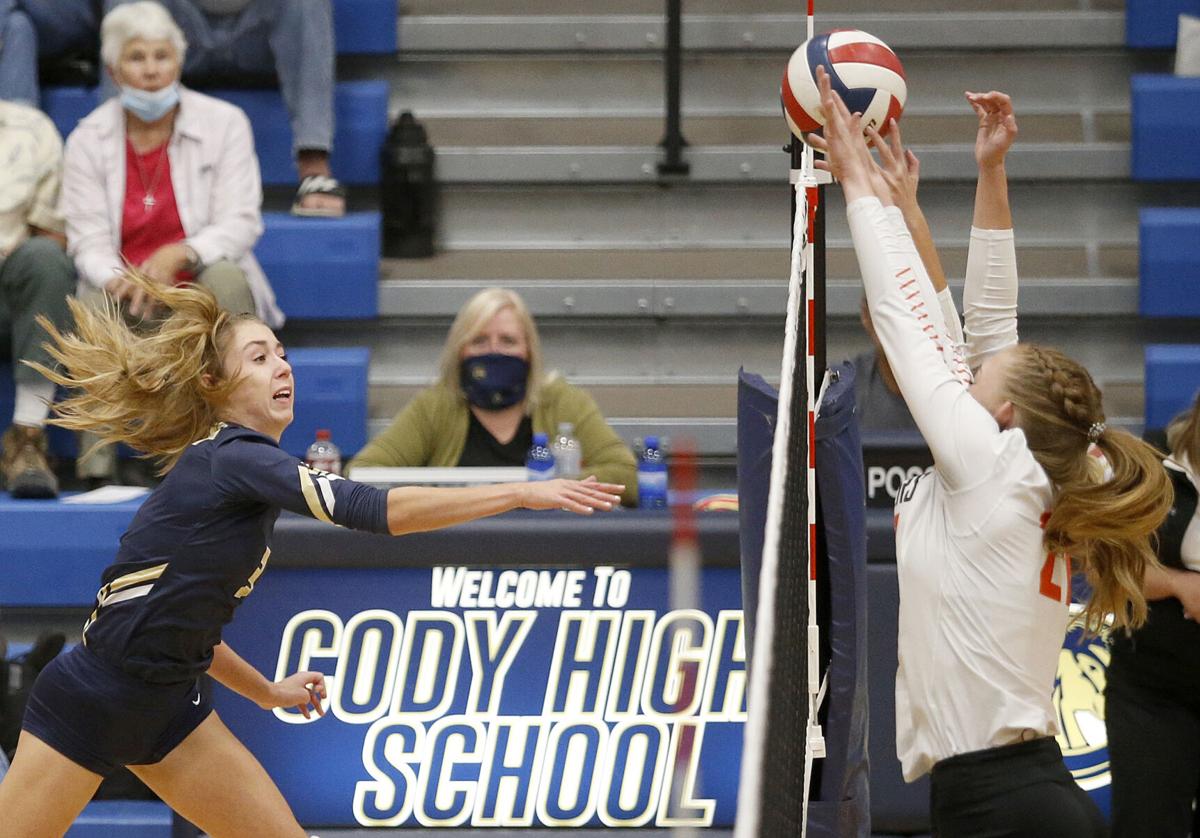 Kennedi Niemann tries for a kill. 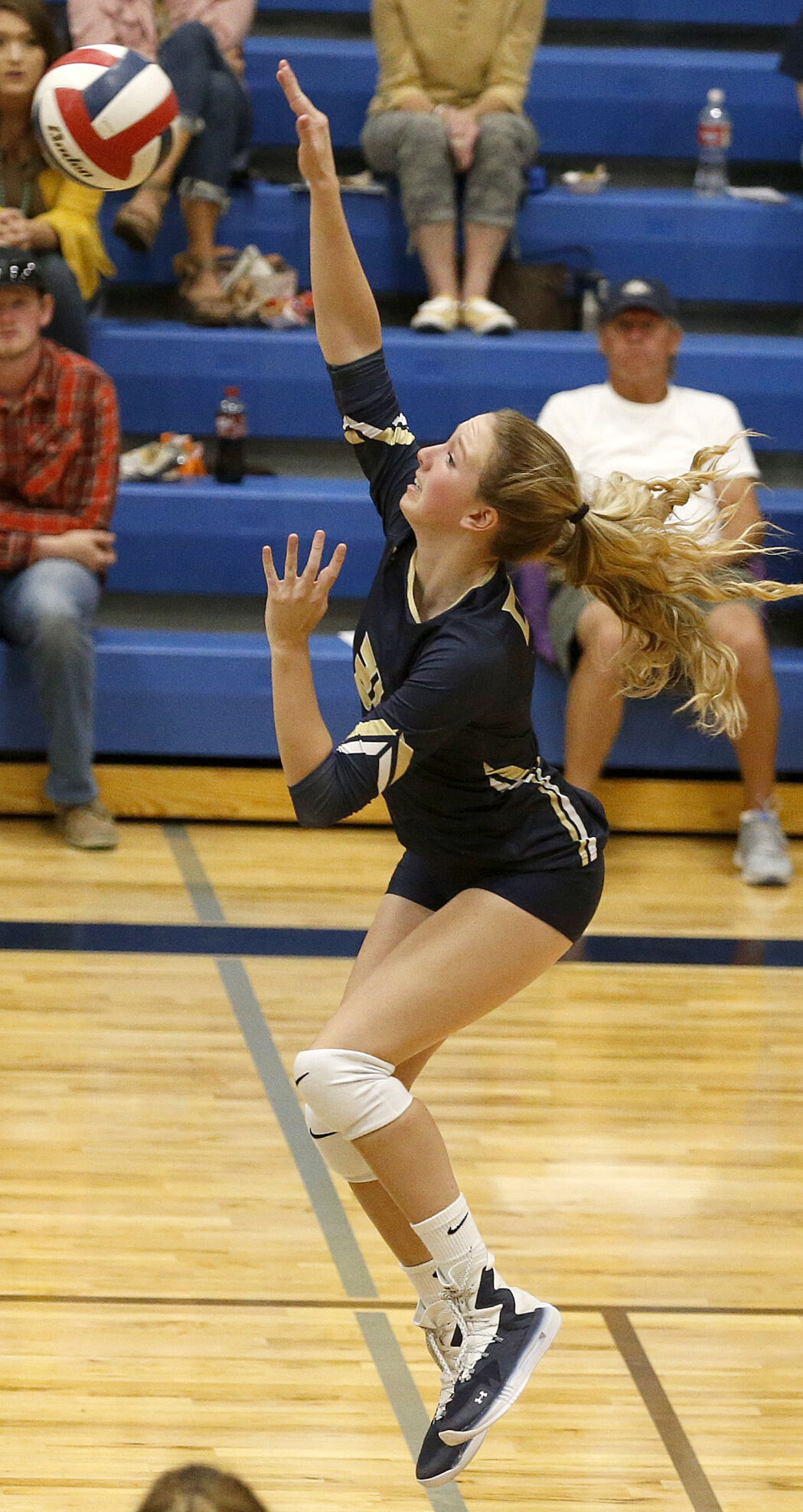 The Fillies listen to coach Stephanie Birch during a timeout.

Reece Niemann passes the ball over the net.

Ava Meier goes for a kill.

Ava Meier and Lake Harrison go up for a block.

Grace Shaffer tries for a kill.

Kennedi Niemann tries for a kill.

With one of its top offensive threats (Wilson) out sick Saturday, the Cody volleyball team had to adjust, with Kennedi moving to the front row for the match, Gillian Growney to libero and Ava Meier also getting significant playing time.

“I was a little nervous,” Meier said, “but with the support of the team I got the hang of it.”

The three handled the roles just fine, but as they did on Thursday, the Fillies got off to a slow start in set one as Rock Springs scored 11 in a row. Cody’s first point came when the Lady Tigers hit the ball out of bounds. Back-to-back kills by Reece Niemann made it 15-5.

“We had a rough start and couldn’t fight back,” Growney said. “We couldn’t put anything together. We’d miss the pass or the set or the hit. It seemed like we couldn’t get all three.”

Late in the set the Fillies got more going, with a kill and later an ace by Bower, an ace by Molly and block by Reece and Kennedi, but it was too late as Rock Springs won 25-15.

Cody got off to a much stronger start in the second set, going up 6-1 after kills by Kennedi and Meier, and an ace by Grace Shaffer. Rock Springs pulled within one, but Cody maintained the advantage and built it up to six with kills by Bower and aces by Kennedi and Hays.

“We changed our mentality and came out and picked it up as a team,” Meier said. “We knew we could play with them.”

“We had a better start with good hitting, but then we went back to how we were in the beginning,” Growney said. “It wasn’t coming together for us.”

Cody kept things close in the third set, leading early after kills by Lake Harrison, Kennedi and Meier. Rock Springs took a 6-5 lead and maintained the advantage until a 4-0 run on kills by Kennedi and Meier and a block by Kennedi tied the match at 13. Cody scored two more and held a slight edge until the Lady Tigers tied the set at 20.

Tied again at 22, Cody set up game point on an out hit by Rock Springs and a tip by Harrison. A kill by the Lady Tigers and bad pass tied the game at 24. A pass out of bounds by Cody gave Rock Springs game point and a block made it 26-24.

“We played up and down and then they had us scrambling a little bit,” Meier said.

The Fillies travel to take on Evanston and Green River this weekend.

“We need to practice hard this week and figure some things out so we can be ready to go,” Meier said.