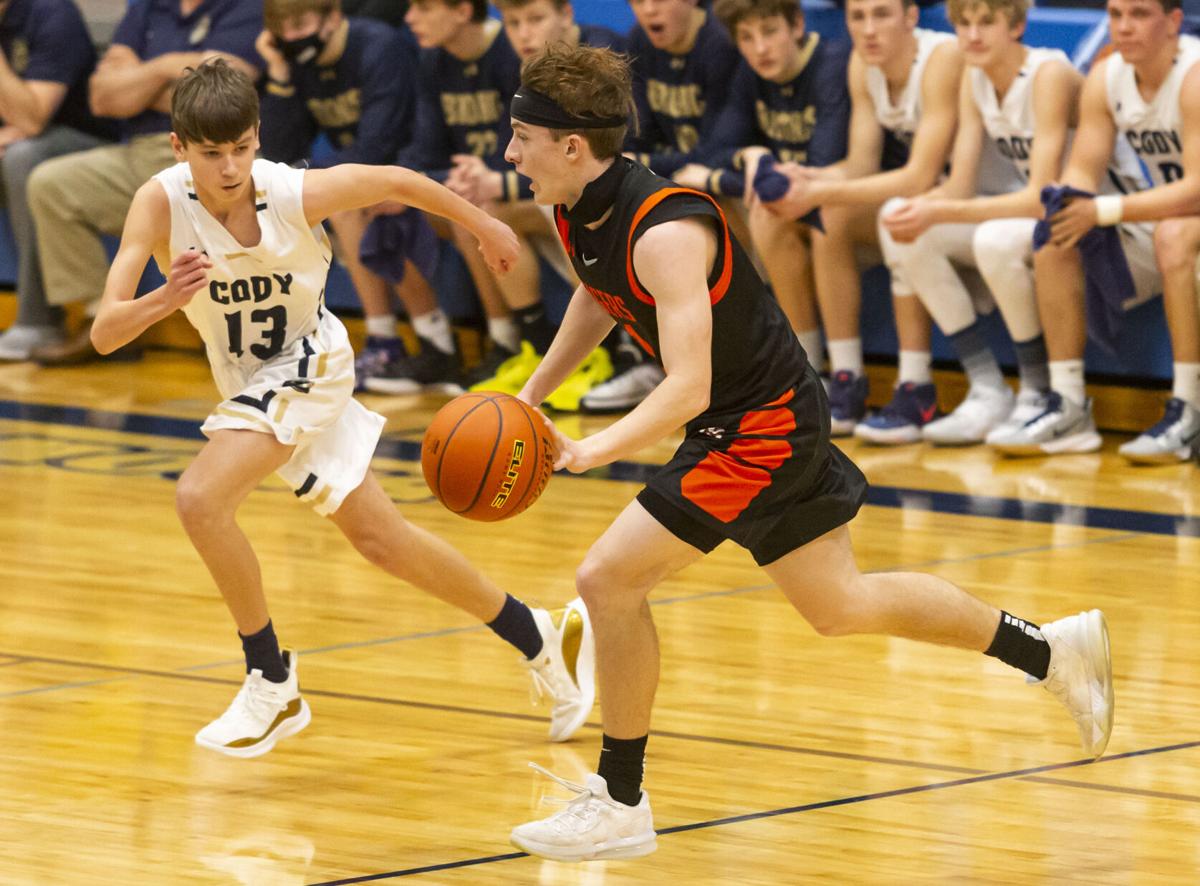 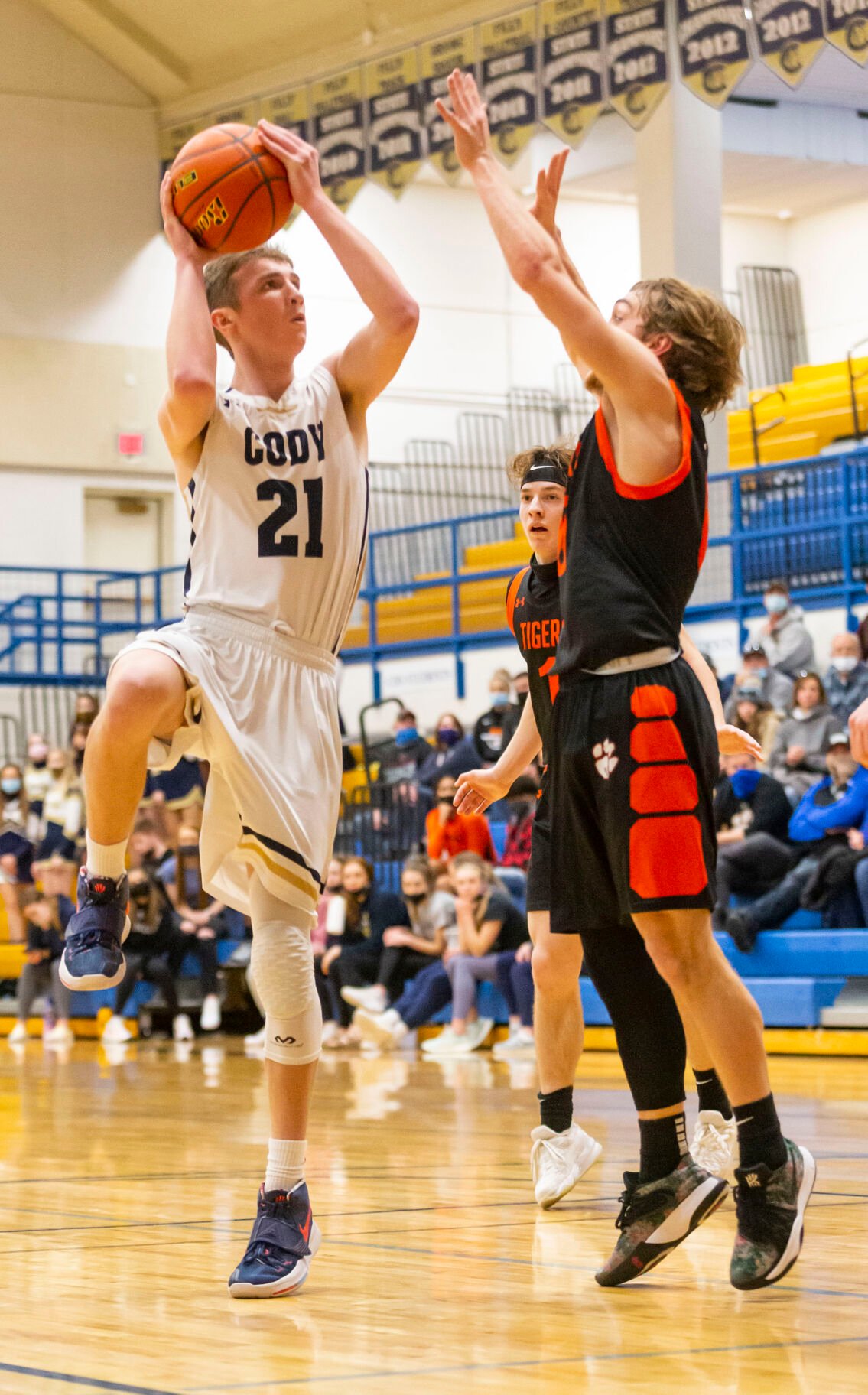 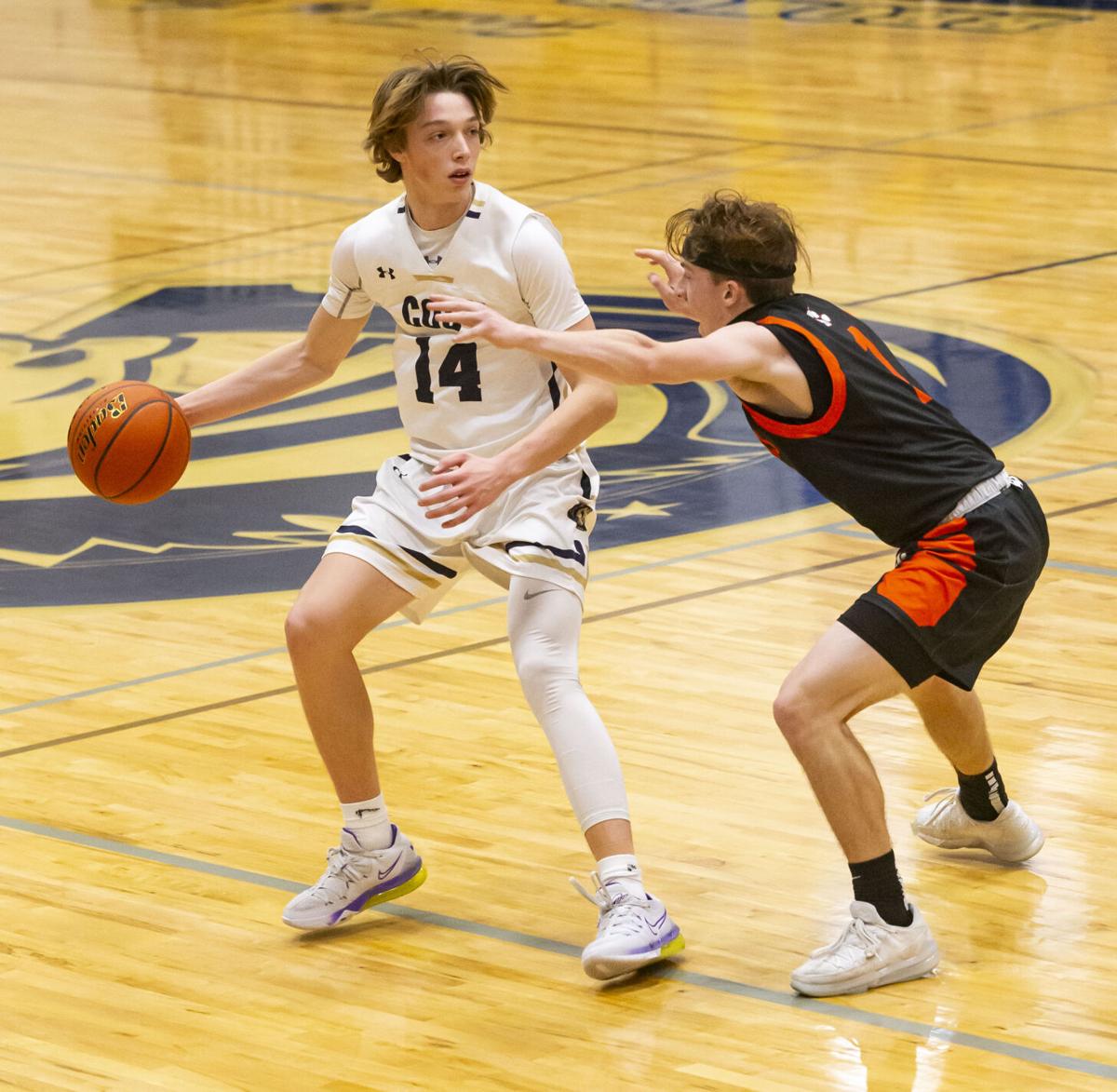 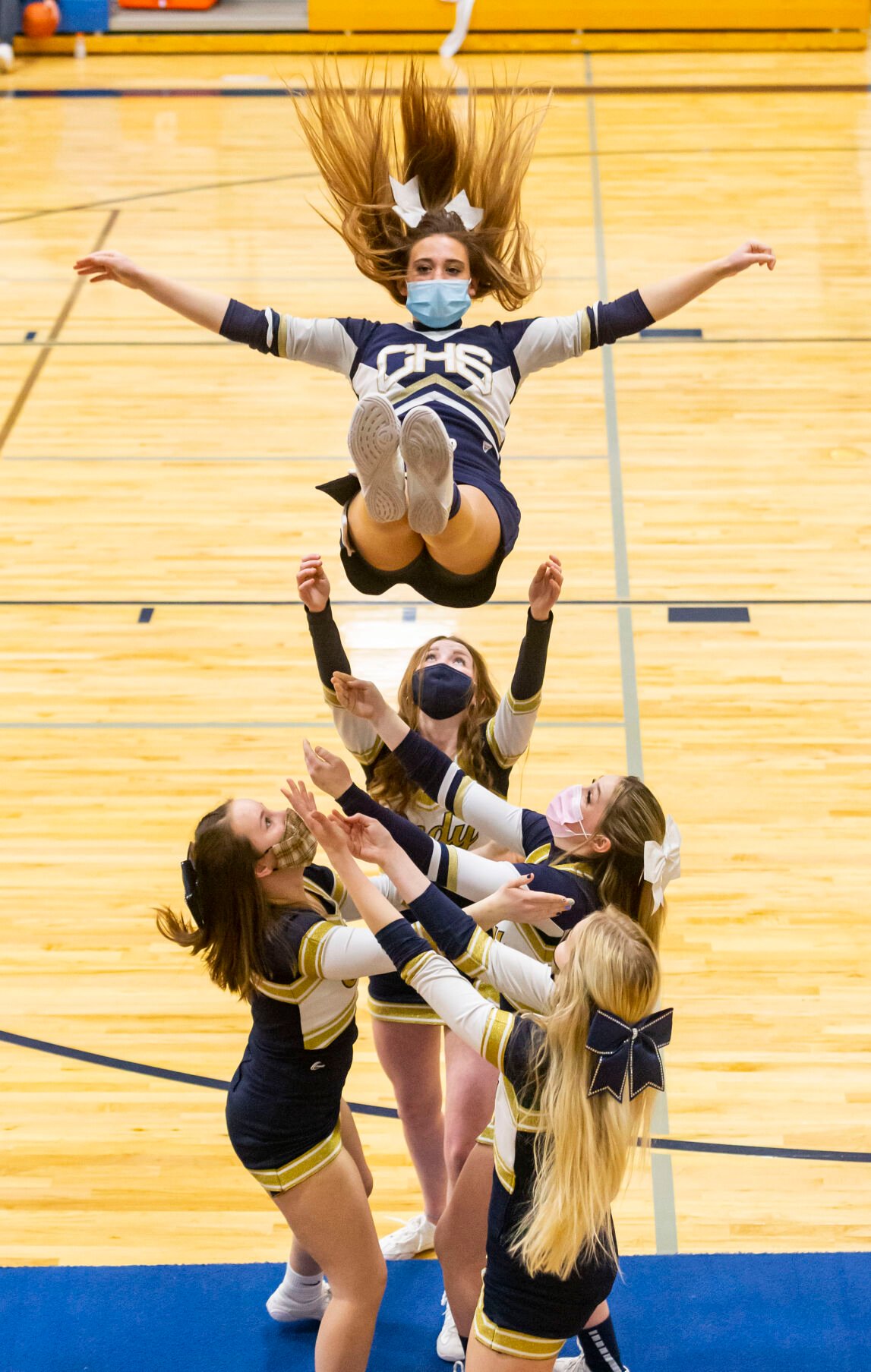 Senior Leiawna Varian does a basket during halftime on Saturday, February 20th. 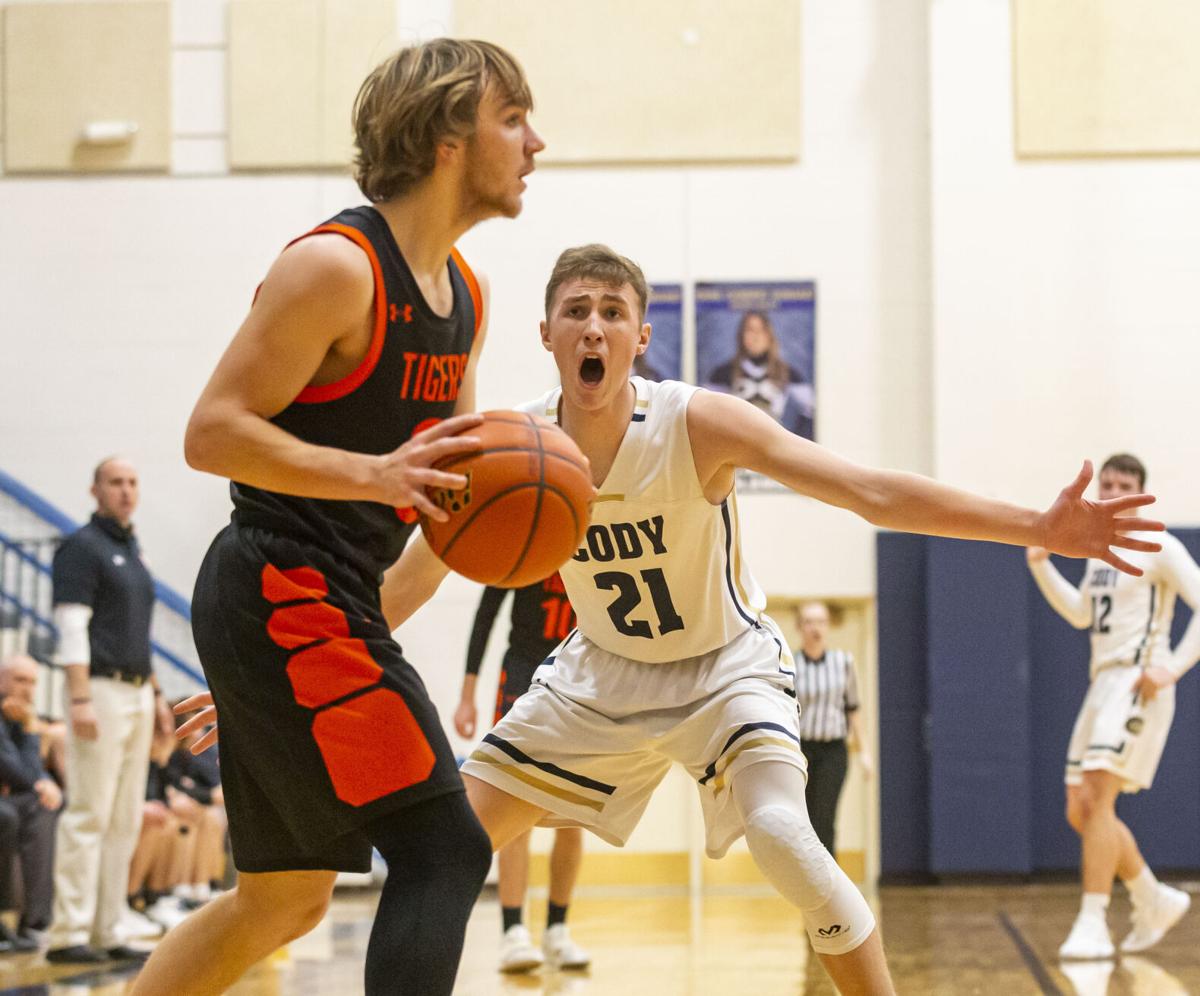 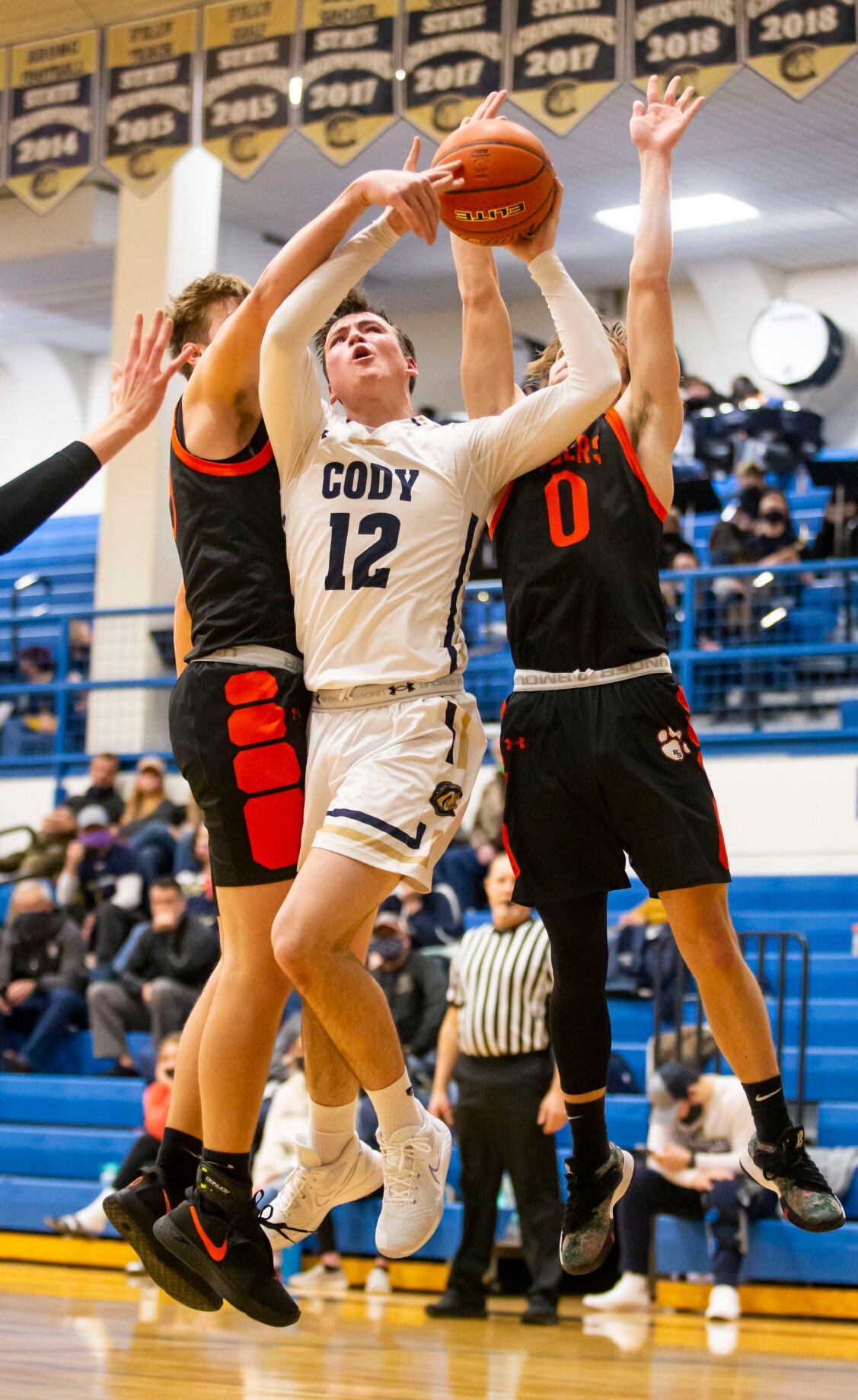 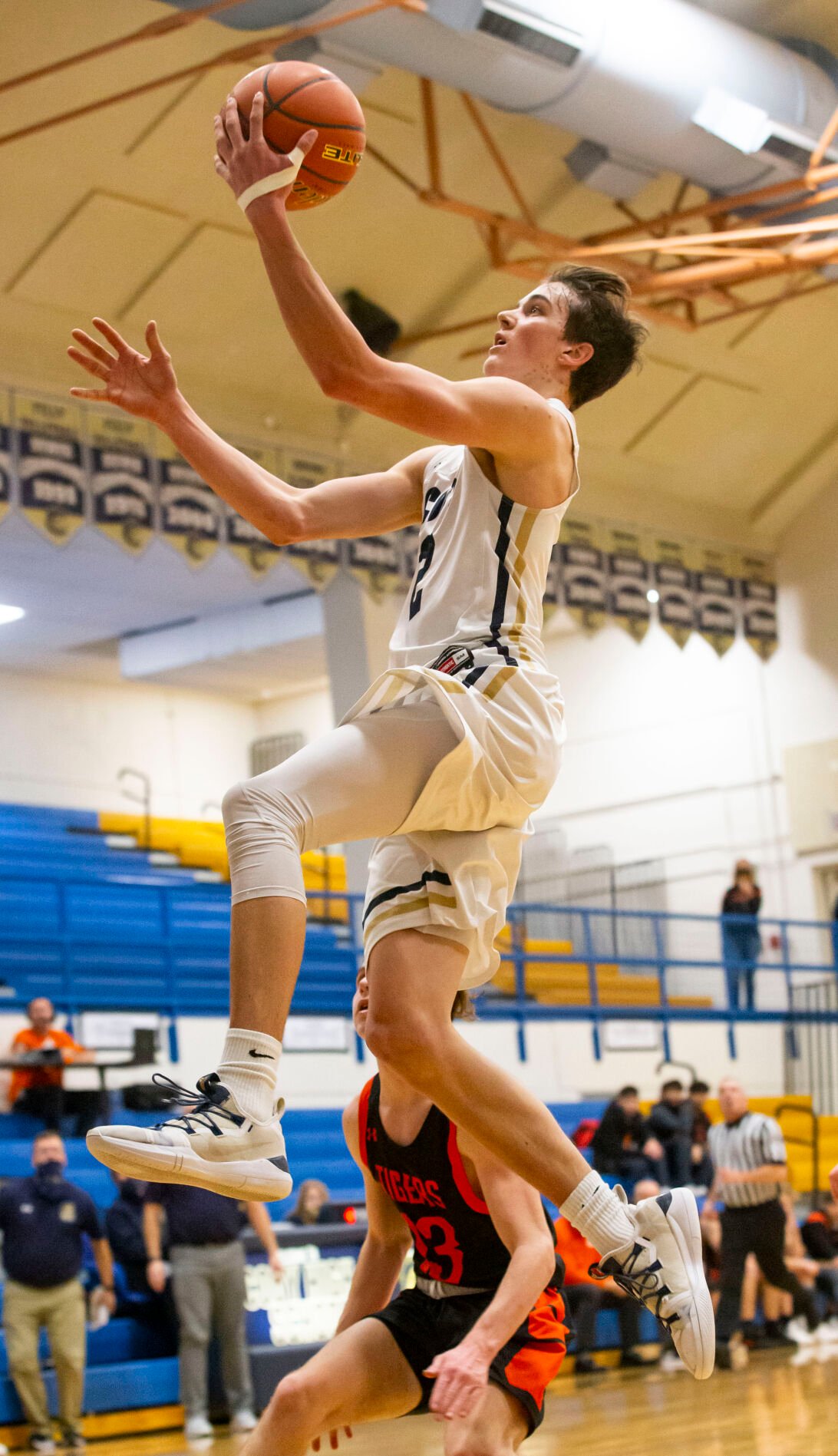 Senior Leiawna Varian does a basket during halftime on Saturday, February 20th.

After splitting a pair of conference games this weekend, the Cody boys basketball team gave itself a shot at securing the No. 2 seed in the 4A Northwest, falling in a rematch with Natrona County on Friday, but beating Rock Springs on Saturday.

The Broncs couldn’t do it twice, falling to the team they beat by three the last time they met. Cody dropped dropped Friday night’s contest in Casper to Natrona County, 67-39.

Luke Talich led the Broncs with 16 points in the loss, Kamden Niemann added eight – including a pair of 3-pointers – and Tristan Dollard scored seven.

Cody (4-13, 2-3 4A Northwest) couldn’t keep Natrona from scoring early in the first, with the hosts ahead 12-2 before Talich sank a pair of free throws to get the score back to single digits. Natrona (5-10, 1-4 4A Northwest) couldn’t be contained for long, going on another spurt of scoring late in the quarter as the Mustangs’ Ryan Swan tallied 11 points in the first.

“We came out absolutely flat the first five possessions,” coach Jacob Kraft said. “I don’t know if it was two or three straight live-ball turnovers. We got punched in the face and it kind of unraveled on us from there.”

Dollard tried to change the momentum to start the second quarter, getting an early score to cut the lead to 20-8. After a Natrona bucket, Niemann sank a corner trey to cut the lead to 11 at 22-11, but the hosts responded with a 9-0 run to go ahead by 20. Talich stopped the run with a pair of free throws to cut the deficit to 31-13. After another Cody free throw, Natrona led 31-14 at the half.

Talich kept leading the Broncs early in the third with another score to make it 34-16, but on defense Cody couldn’t stop Natrona as the Mustangs scored the next 13 consecutive points to take a commanding lead. Dollard stopped the run when he sank a layup despite contact with 2:30 to go, but Natrona responded and led 52-24 after three.

Cody couldn’t get it closer but Talich kept it up late into the fourth, sinking a finger roll before Cody’s starters gave way to younger players to finish the game.

After a blowout loss the night before, the Broncs bounced back in a big way on Saturday by taking down Rock Springs 40-34.

The Tigers (3-13, 2-3 4A Northwest) have been a middling defensive team all season long, but harassed and harangued the Broncs last time they met, holding Cody to just 31 points in a narrow victory.

The defensive battle continued into this game as neither team could find the bottom of the net. The Broncs scored just eight points in the first two periods, led by Talich, who dropped in four points off a pair of nice moves on the low block.

The Tigers took advantage of every ounce of their size on offense, playing a bit of bully ball, grabbing offensive rebounds and converting on their second or third tries. Offensive rebounding was the difference in the first half, with the Tigers scoring six of their 17 first-half points on putbacks. A clutch 3-pointer to end the first half gave Rock Springs a nine-point advantage going into the locker room 17-8.

It wouldn’t last. Cody’s offense clicked into high gear as Talich moved from the post to the wing and slashed his way to 13 points in the third quarter, bringing the Broncs within one at the end of the period.

“I think we came out in the second half with way more energy,” Dollard said. “The bench was hyped up the entire second half, [that] really got us going.”

The Broncs outscored Riverton 32-17 in the second half and never allowed more than 10 points in a quarter through the entire game.

The Broncs kept it going in the fourth as Talich tipped an inbounds pass and went coast-to-coast to give Cody its first lead of the night with seven minutes left to play.

“I was kind of talking to one of their players and I just kind of touched the ball and was like, ‘Oh okay, I can take it,” Talich said of the play.

The Broncs didn’t stop there, building their advantage as Caleb Pryor and Dollard scored a few crucial buckets and Nic Talich nabbed a couple of key steals.

The Broncs built a lead as high 12 points en route to their fourth victory of the season. Talich led the way again for Cody, scoring 24 points on 9-of-13 shooting and grabbing five rebounds. Dollard added eight points.

The win makes this week’s matchup with Riverton all the more important, as a victory against the Wolverines could secure the No. 2 spot in the 4A Northwest for the Broncs as the season winds down.

“We hope we get the matchup we want [at regionals],” Kraft said. “It’s going to be a fun game either way because both teams know it’s win or go home.”

For the first time this season, the Broncs held their opponent to fewer than 10 points in every quarter.

“We want to hang our hats on our defensive abilities and that was definitely nice to see,” coach Jacob Kraft said.