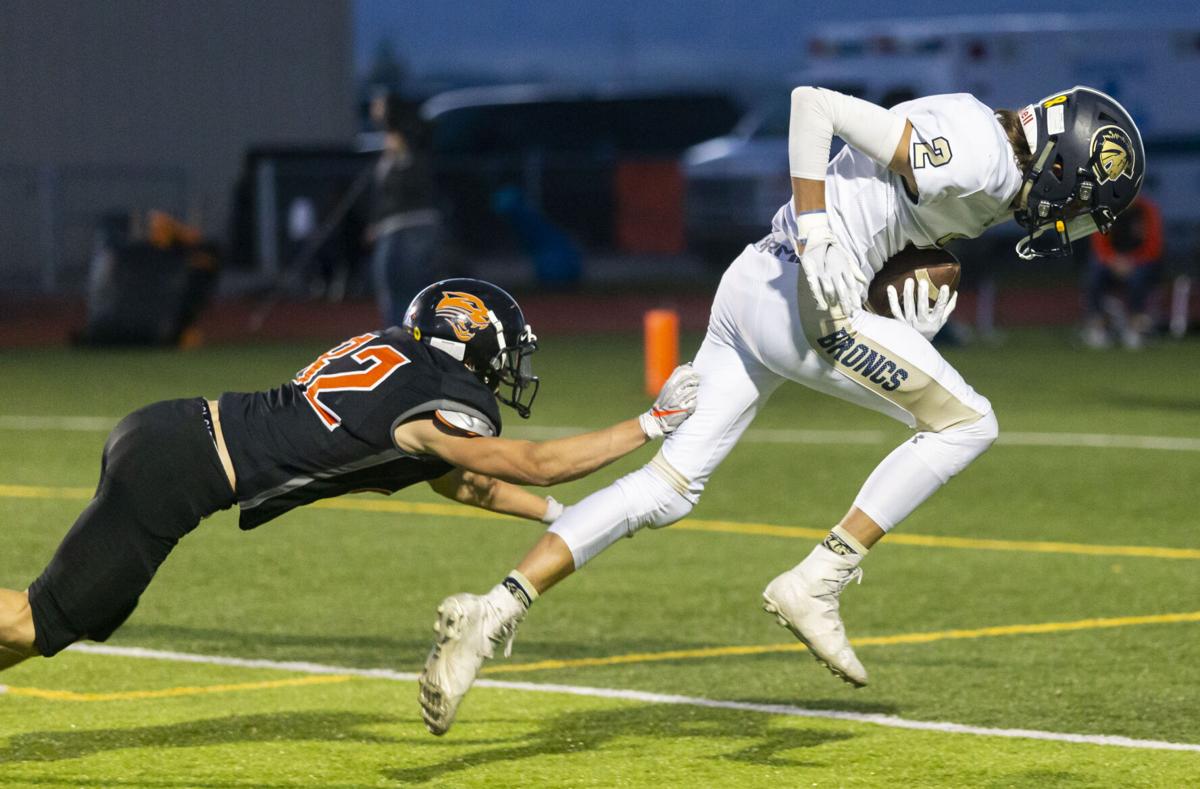 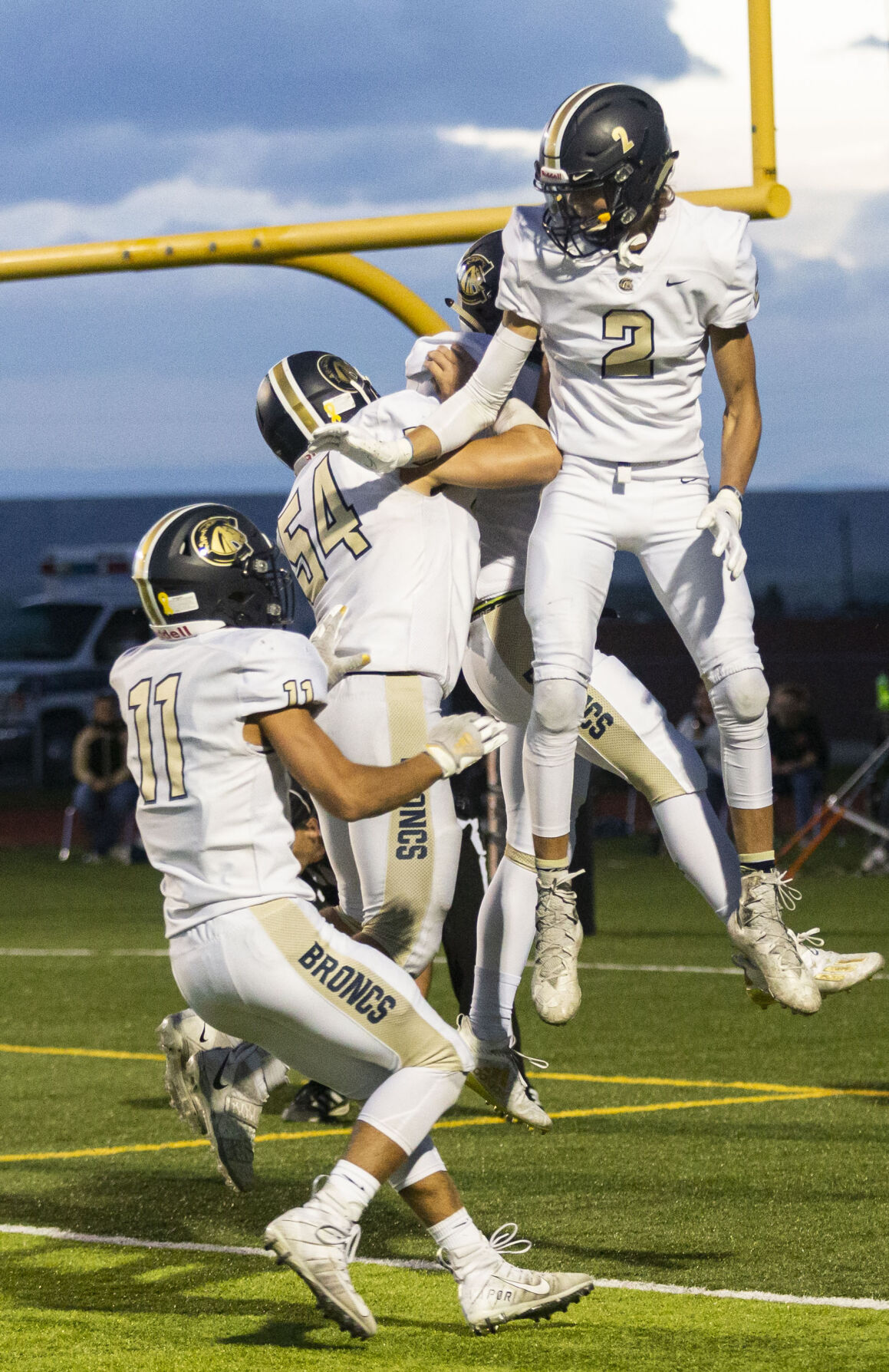 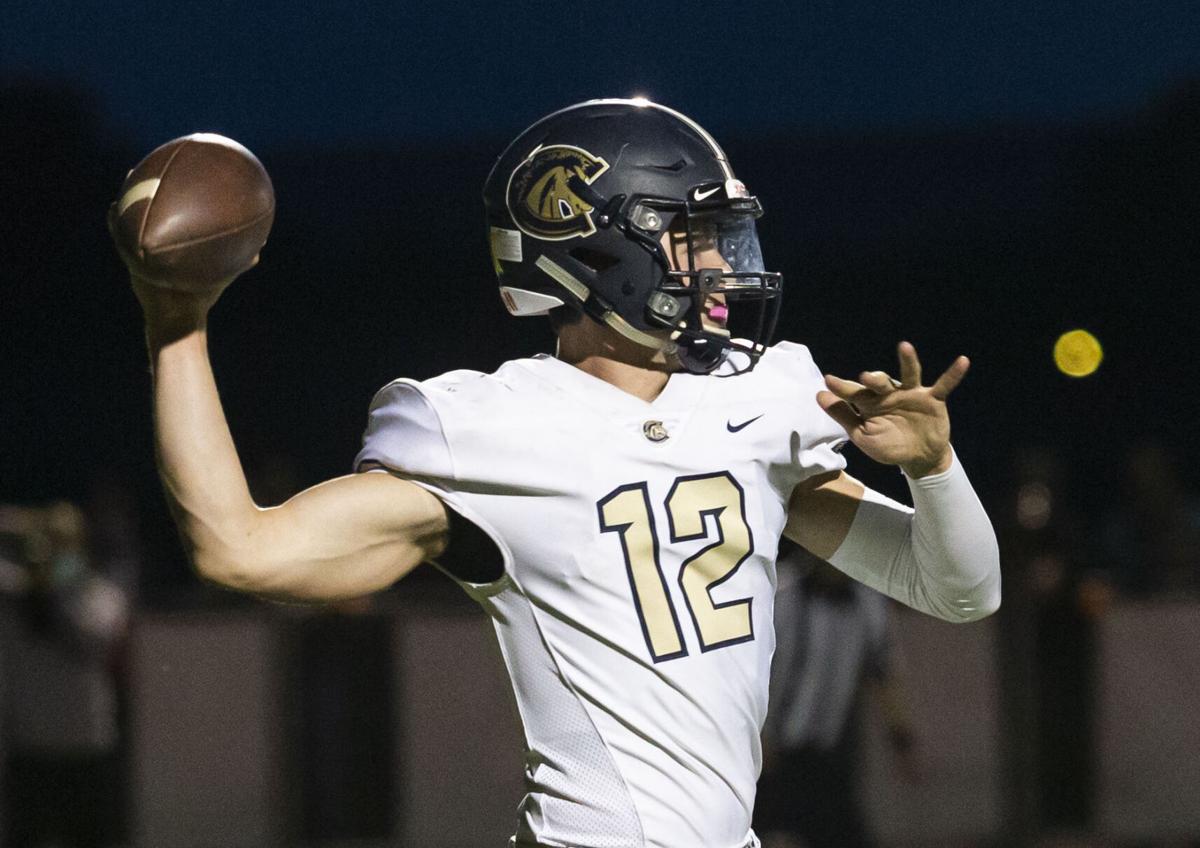 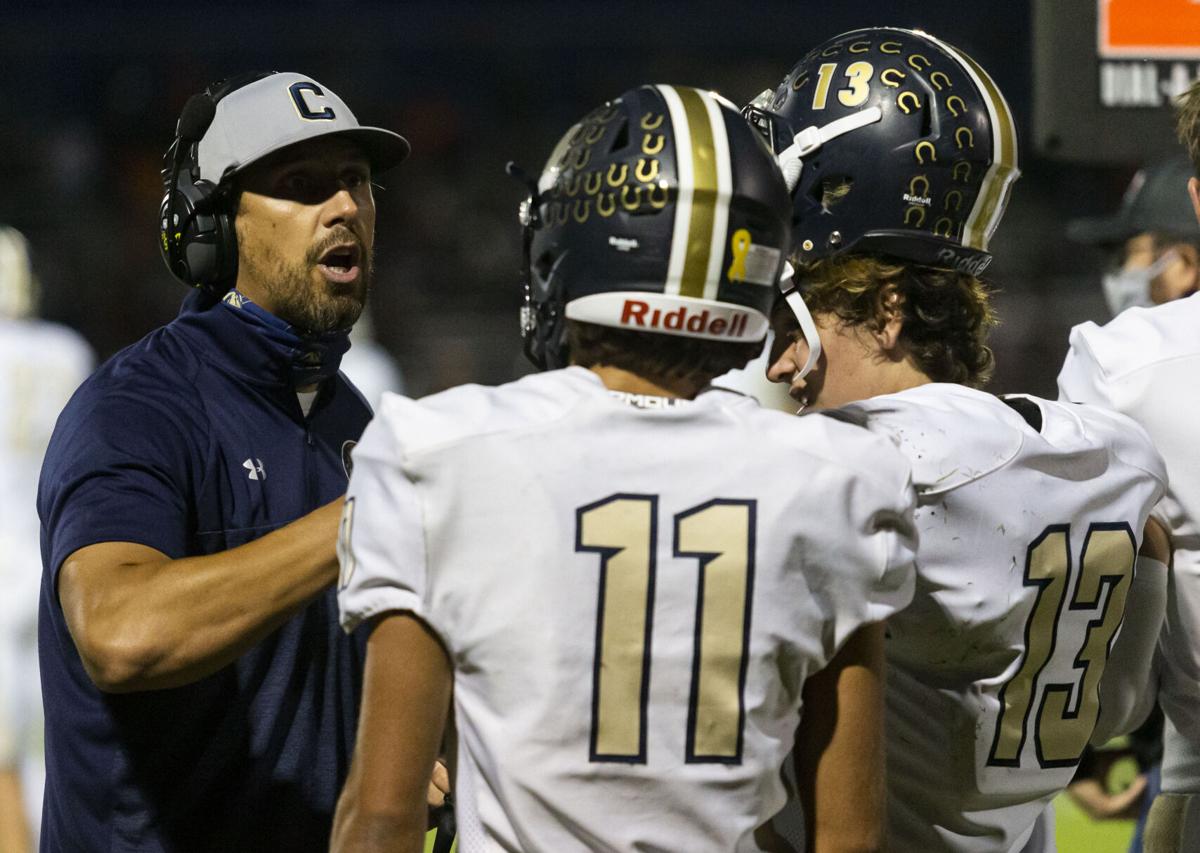 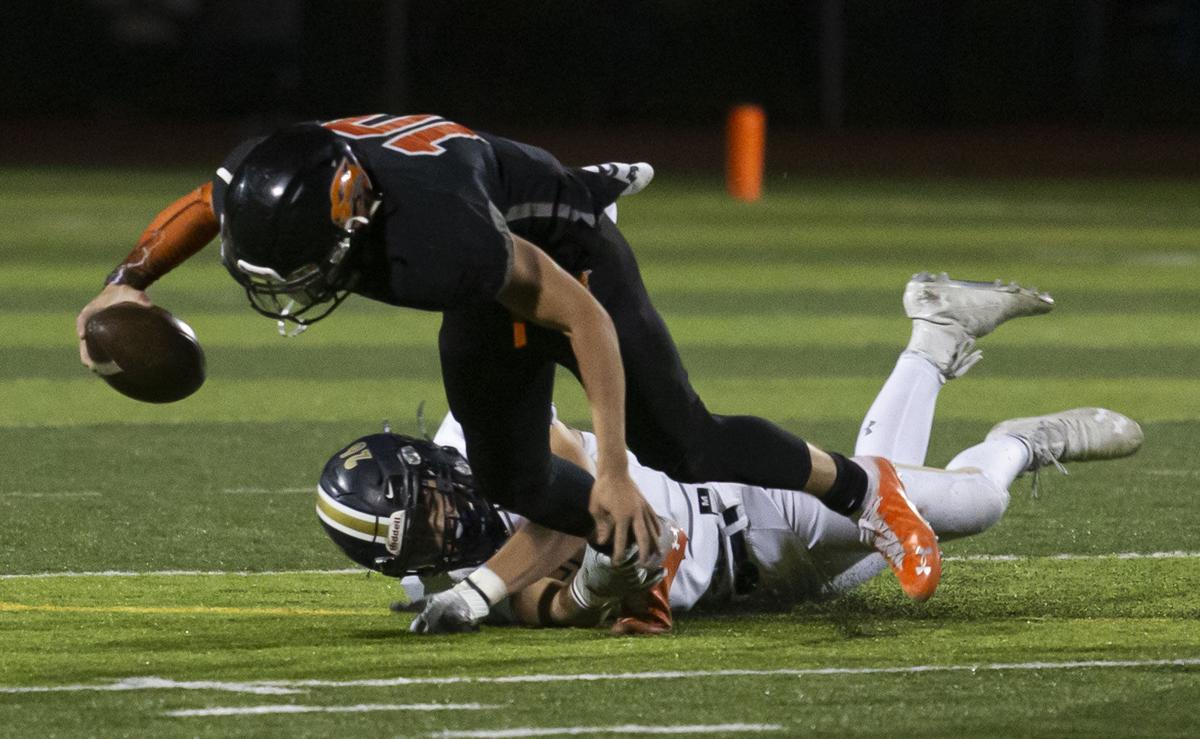 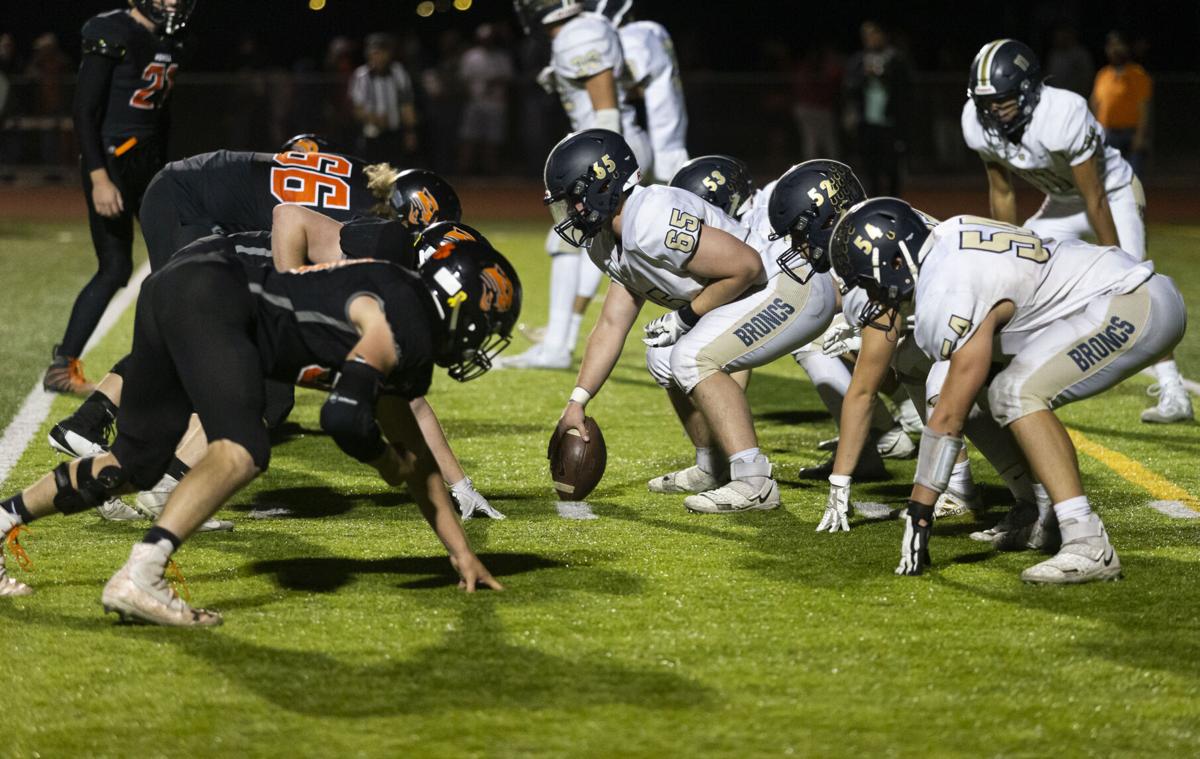 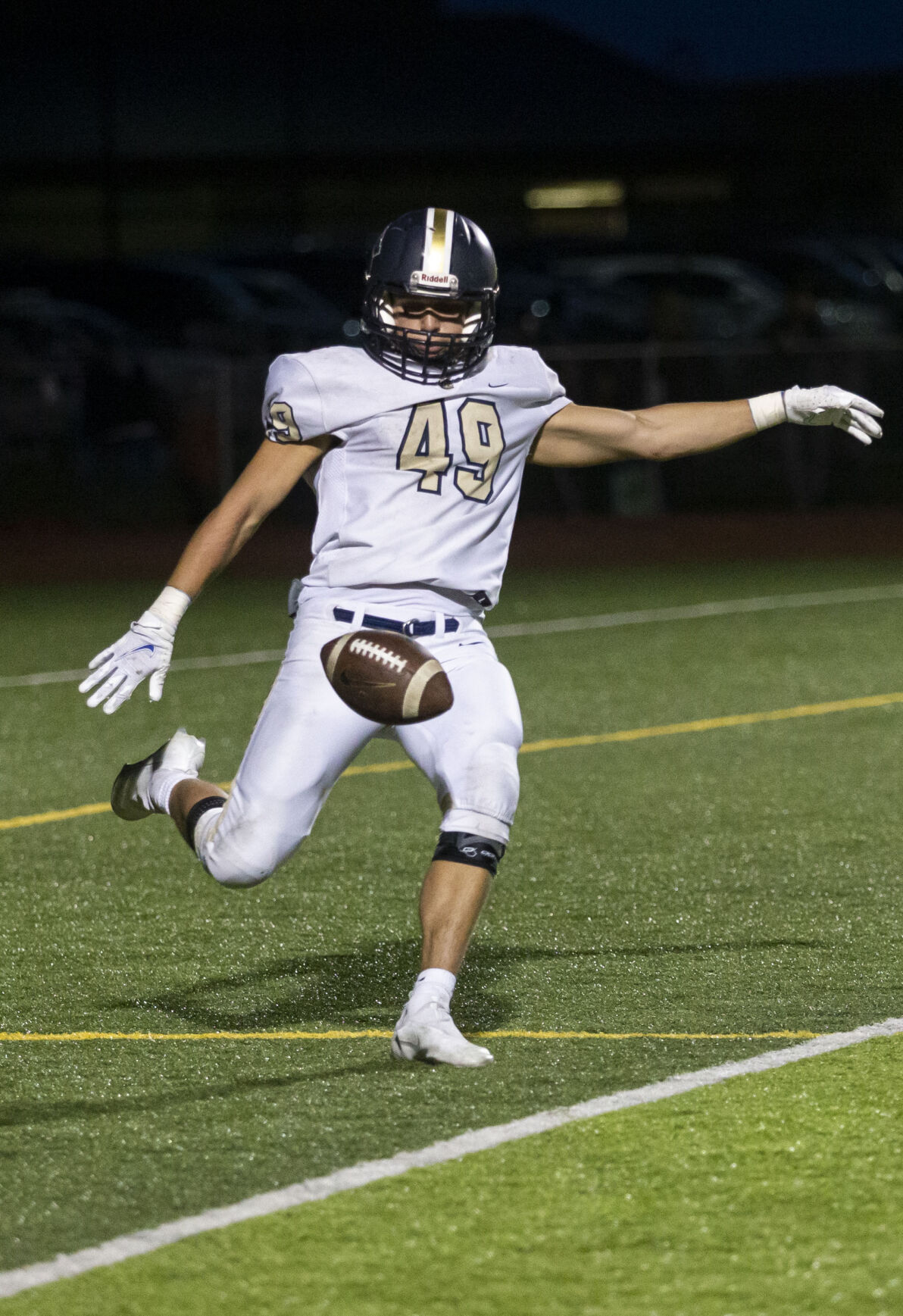 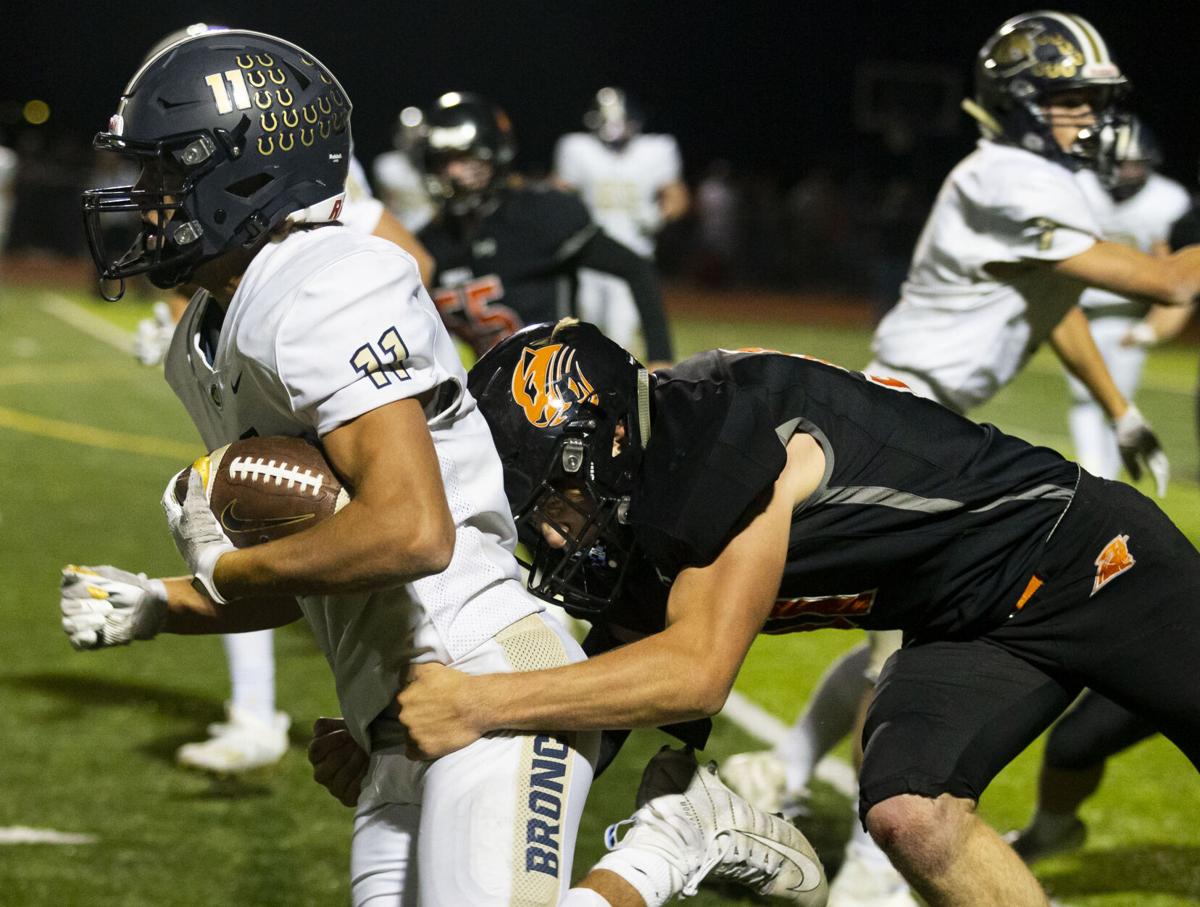 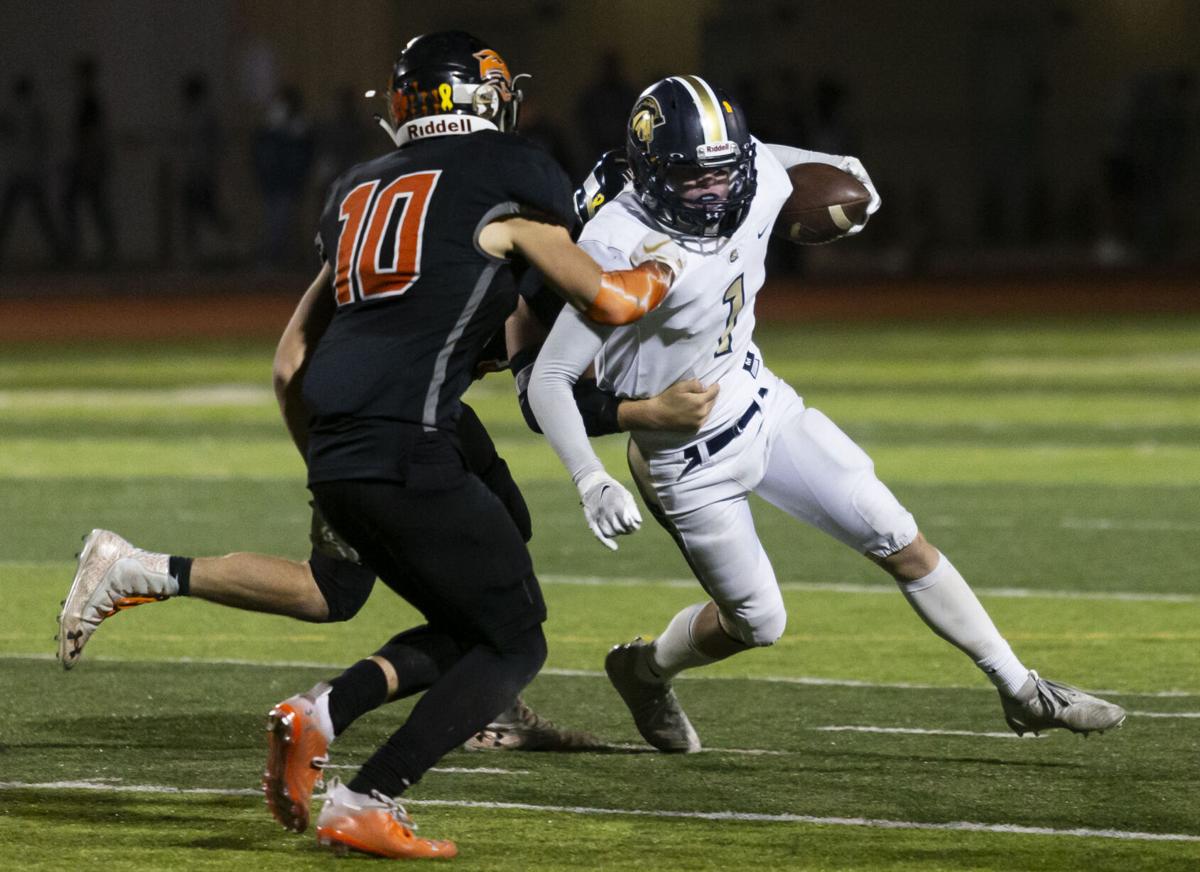 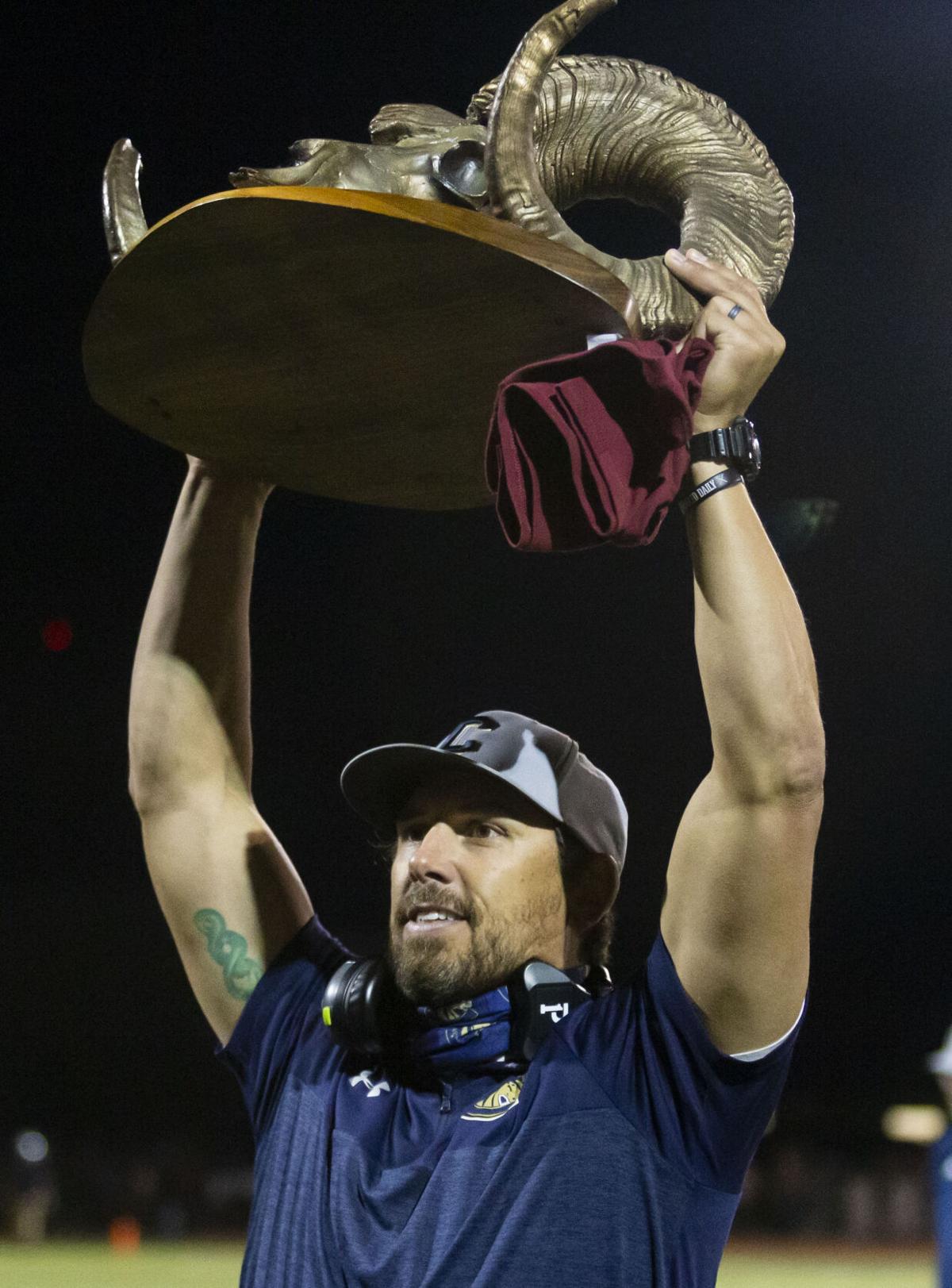 Coach McFadden holds up the Big Horn Brawl trophy to the crowd after a 14-0 victory Friday. 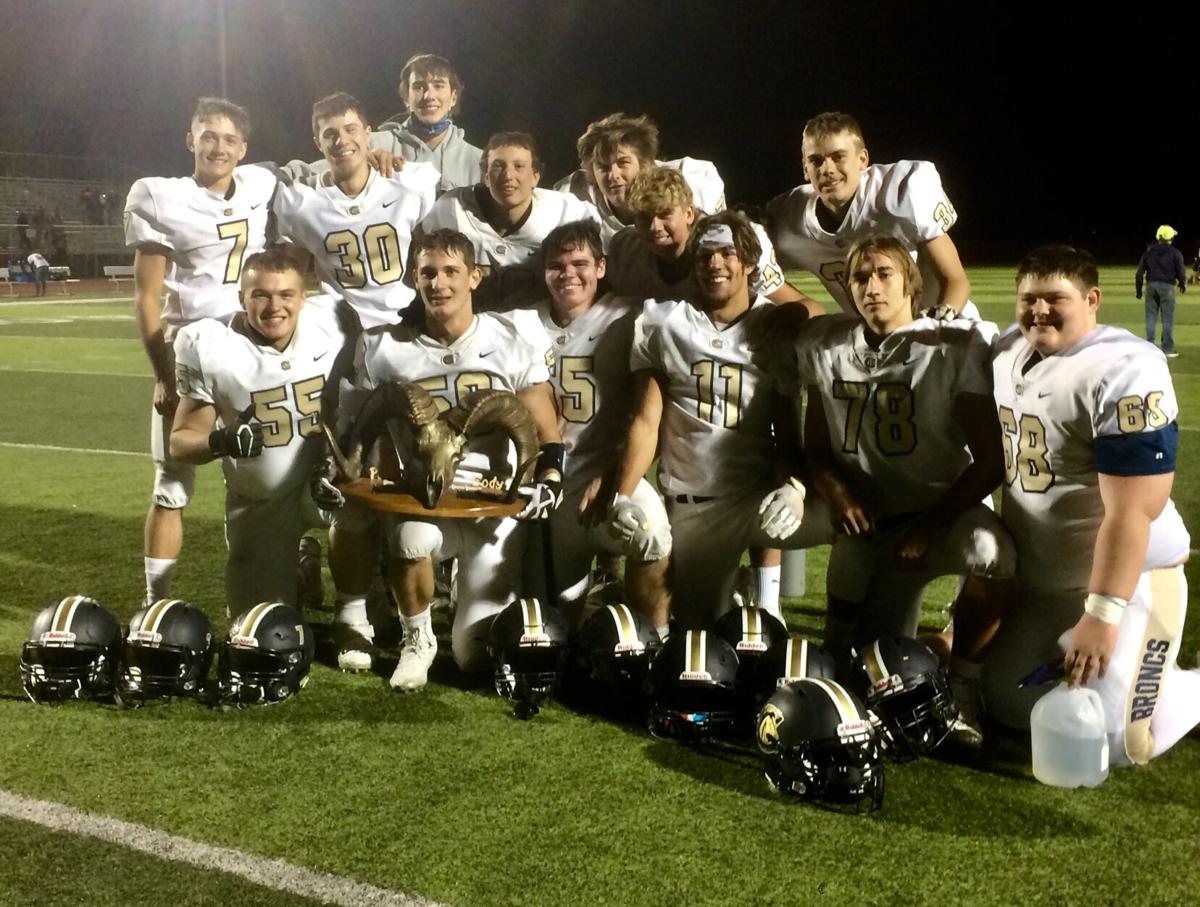 Coach McFadden holds up the Big Horn Brawl trophy to the crowd after a 14-0 victory Friday.

The No. 3 Cody football team (4-0) beat top-ranked Powell 14-0 on the road Friday night to capture its fourth straight Big Horn Brawl win and first conference win of the season.

It was the first big test the Broncs have faced this season and the win tasted even better with revenge sprinkled on top after Cody lost to Powell (3-1) in last year’s semifinals.

Cody Phillips said the Broncs had been thinking about the loss since that game ended, through the winter, spring and summer. Fast-forward about 11 months and that focus didn’t fade a bit as Chaz Cowie said the heartbreaker stayed on their minds “all week.”

“We’ve been thinking about it since last year,” he said. “We were ready to beat them. We came prepared, mentally prepared. We were ready for them.”

The Panthers only entered the Cody red zone once all night and completed just one reception. Nic Talich led the defense with a season-high 10 tackles.

“Our defense did amazing, we wouldn’t be here without any single one of those guys,” Jackson Gail said.

Cody’s defense was solid, but the offense did its part, too, orchestrating a 10-minute drive that ate up most of the fourth quarter.

“We were able to make some key plays on offense, handle the ball when we needed to,” coach Matt McFadden said.

Gail and Luke Talich each had a receiving touchdown while Jack Schroeder and Caleb Pryor had key sacks on defense. McFadden credited his fellow coaches for providing an excellent gameplan on the defensive side of the ball, and his players for executing it.

“Really proud of our defense, they’re pretty tough,” he said.

Pryor made eight pass attempts in the first quarter but could only land two on target.

One of these came at 7:23 in the first when he found Luke Talich on a beautiful 30-yard slant route to score and make it 7-0 after the PAT. The score capped off a six-play, 66-yard drive.

The Broncs stopped a Hawkin Sweeney fake punt attempt when Keaton Stone made a big tackle on the Cody 43 at 9:37 in the second. But the Broncs then punted it away after getting only one first down.

A 15-yard block in the back on Powell gave the Panthers a second down-and-37. They punted it away two plays later, but a Bronc fumble on the return gave the Panthers the ball back at the Cody 43 with 1:05 left.

“It’s a long game and sometimes you can come out for these too amped up,” McFadden said.

Zachery Ratliff hauled in a 14-yard reception on the first play from scrimmage, bringing Powell near the red zone. But then on third down three plays later, Schroeder sacked Powell quarterback Landon Langfelder, pushing the Panthers back 13 yards to the 42.

“We stop the run and then make teams throw it around and they’re not very comfortable with that either,” Devyn Engdahl said.

The Panthers punted it away and it was 7-0 at halftime.

Both teams attempted to air it out in the half, but neither had much success.

Pryor was 3-for-11 with 40 passing yards. Cody had 95 total yards while Powell finished with 54. Both teams had five penalties.

“We definitely had problems with penalties and stuff, but we just kept moving forward against their offense and defense,” Stone said.

On the first play of the second half, Cowie found an opening around the right side and busted out a 56-yard rush.

“In the locker room we were talking and they said, ‘You’ve got to cut up when you see that hole,’” he said. “There was a nice hole there and there were some great blocks. It really set the tone for the second half.”

But three plays later the Broncs fumbled the ball and Powell recovered.

A bad pitch by Langfelder two plays later sailed past the intended target and the Broncs recovered the ball, this time with much better field position on the Powell 13.

Pryor then found Gail for an acrobatic 13-yard scoring reception at 9:03 in the third. Gail was able to shift his weight behind the trailing cornerback and haul in a pass that came in behind and above him. He kicked the PAT as well and it was 14-0.

“It felt amazing,” said Gail of the win.

The teams traded scoreless possessions for the rest of the third.

Powell started the fourth on the Cody 32 and would push as far as the 24, but this was the closest to scoring they would come all night.

A Powell penalty followed by a quarterback-on-quarterback meeting in the form of Pryor sacking Langfelder for a 9-yard loss brought about a Powell fourth down punt.

Cody was then able to push out from its own 2-yard line early in the quarter and proceeded to milk the clock for the rest of the game, not relinquishing the ball until 2 seconds remained. Although they only got two first downs during the drive, they were able to keep the run alive thanks to two Powell penalties.

The game could have had a much different result for either team if a few overthrown passes had made their way to open receivers.

“We missed a few receivers, probably could have had another 14 on the board with those,” McFadden said, “But we’ll come back and work on that, we’ll work on that on Monday.”

The Broncs were able to hold the Panthers to 74 total yards and no second half receptions. Langfelder was 1-for-9 with 14 passing yards.

Pryor finished 5-for-16 with 70 passing yards. Cowie had 66 rushing yards on four carries. The Broncs finished with 231 total yards.

After the shutout, Cody’s defense is allowing an average of 8.7 points per game and a total of 12 combined points in their last three games.

Cody will play its homecoming game against Evanston (1-4) 7 p.m. Friday.