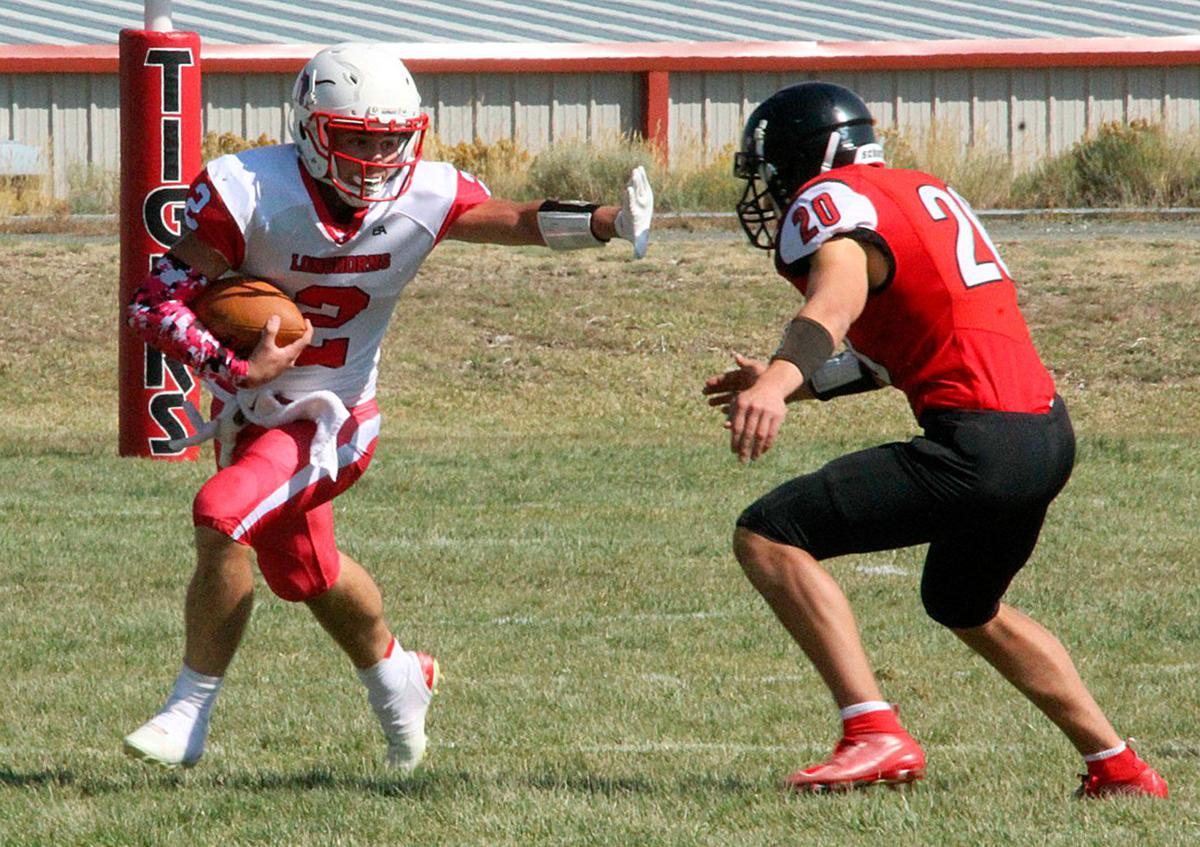 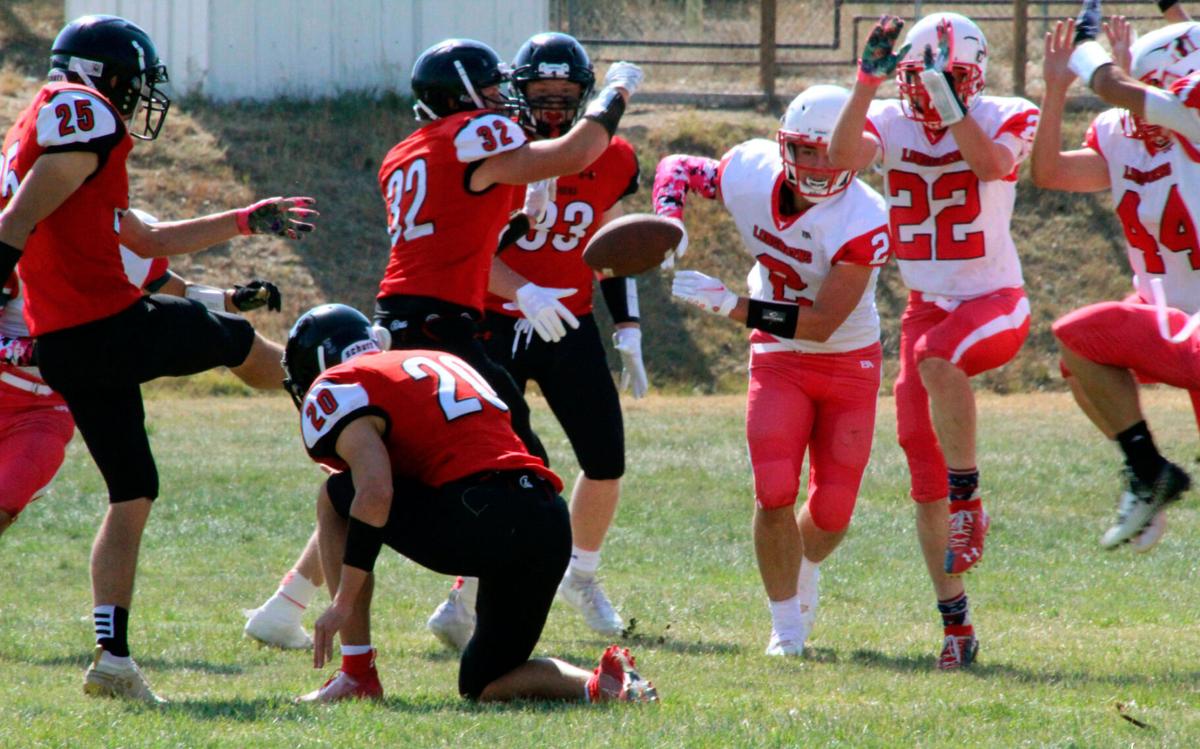 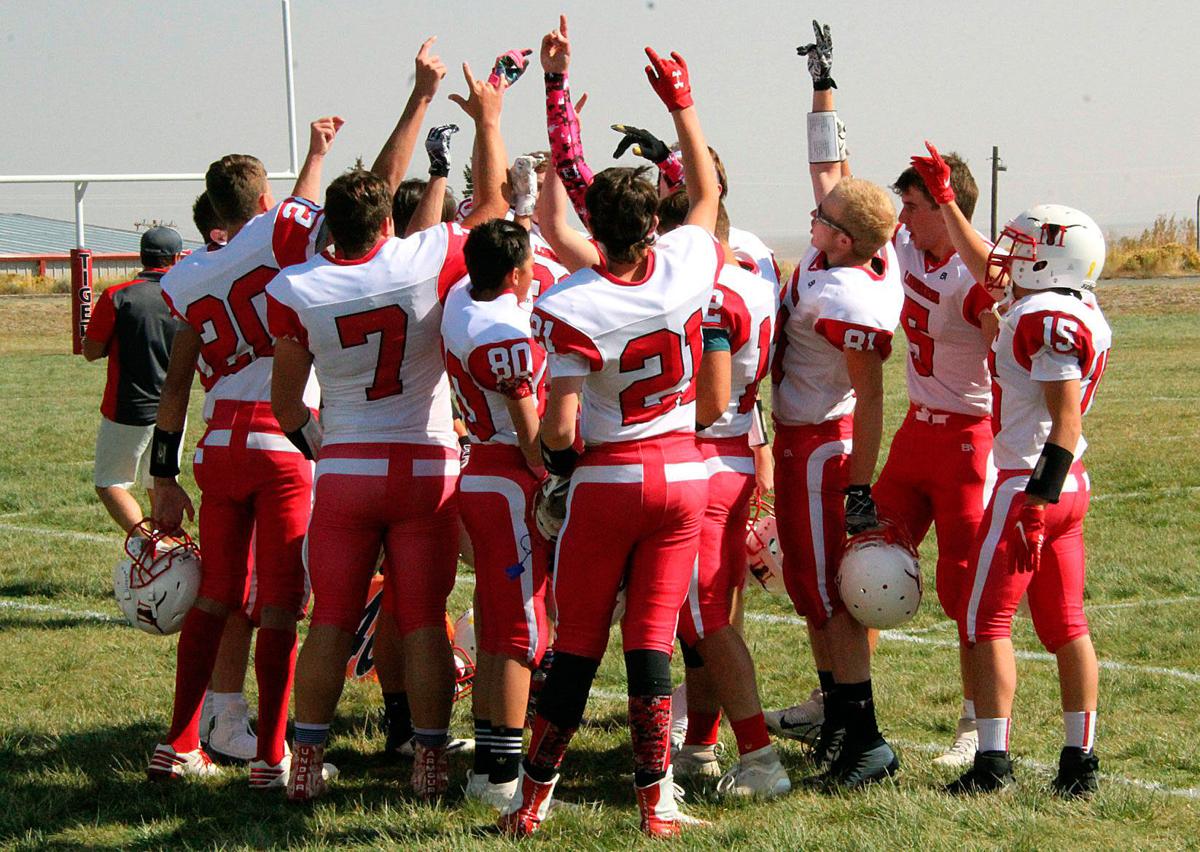 The Longhorns celebrate after improving to 5-0. (Photo by Angie Erickson)

The Longhorns celebrate after improving to 5-0. (Photo by Angie Erickson)

Six weeks ago, the Meeteetse Longhorns had only one goal on their minds: getting back to the playoffs.

“We want to make a run for state this year,” junior quarterback Dace Bennett said in August.

Five weeks into the regular season, the No. 3 Longhorns already have a better record than they did last year and are guaranteed a spot in the playoffs after defeating Encampment (also third in the rankings in a tie) on Saturday 68-52.

“It definitely proved a lot of stuff last weekend,” Bennett said. “Already being guaranteed a spot in the playoffs, going forward I think the guys are super pumped about it.”

Meeteetse (5-0, 4-0 conference) is tied for the best record in 6-man football. It opened the game with an onside kick and marched down the field to jump out to an early 8-0 lead. The Tigers (2-2, 1-2 conference) responded in kind, putting in two scores of their own to get a four-point lead.

The two teams went back and forth, trading scores in the first and the early going of the second. Seven times the lead changed hands. With eight minutes to go in the first half, the Longhorns took the lead and never gave it back, going up 26-25 on the Tigers and nabbing a safety and another touchdown to close out the half up 36-32.

“They have a big team,” senior Hadley Abarr said. “I don’t think they have anyone under 6 feet (tall).”

Abarr hyperextended his knee in the game against Burlington and didn’t get many touches on the offensive side of the ball as the Longhorns tried to manage his workload. He was a wrecking ball on defense, notching 22 tackles (18 solo).

“He had a huge tackle for a loss in the second half that just kind of stalled one of their drives for them,” coach Zeb Hagen said. “It was that point of the game, we started pulling away and getting a cushion in the third quarter. That play just took the wind out of them.”

Abarr has been one of the top defensive players in six-man again this season. After Week 4 wrapped up, he led 6-man in sacks, was second in tackles and second in tackles for a loss. He’s also got three fumble recoveries and two blocked punts on his resume, one of which led to a safety.

Ever the team player, Abarr put much of the credit for his performance back on his teammates.

“I think we have a perfect number of people that can just play the perfect position,” he said. “Our corners and backs are really fast and good at covering the pass. Everybody knows what they’ve got to do. Everyone builds each other up.”

As a team on defense, the Longhorns through Week 4 have allowed the fewest rushing yards per game, are the best at forcing turnovers and sacking the quarterback, and have given up the second-fewest total yards.

“The blocking was really good,” Bennett said of how he was able to put together his offensive performance. “With Encampment being a super-physical team, we knew they were going to scream upfield. I was able to dive through the holes they left.”

“Encampment played a lot of bump coverage, right up on our guys,” Bennett said. “That allowed our guys to get free. I had all the confidence in the world they’d make a play.”

After hitting the game-winning field goal against Burlington the week before, Mickle Ogden followed up that performance by going 6-for-9 on extra points against Encampment, netting the Longhorns 12 additional points (extra point kicks are worth two points in 6-man while running or passing the ball into the end zone is worth one point).

“Our kicking game was huge,” Hagen said. “Encampment elected to go for one on all but maybe one (PAT). We still doubled them just in extra points.”

On Friday, Meeteetse hosts No. 5 Little Snake River, last year’s state champion. Though the Rattlers (3-2, 2-2 conference) have struggled a bit more this season, they aren’t a team the Longhorns can overlook.

“I compare them to Star Valley and how Cody feels about Star Valley,” Hagen said. “They’re a very well-coached team. You’re talking about a group of kids who practiced against one of the best 6-man teams in Wyoming history.”

Kickoff is at 2 p.m. at the Meeteetse football field.

High scoring game...so much for defense