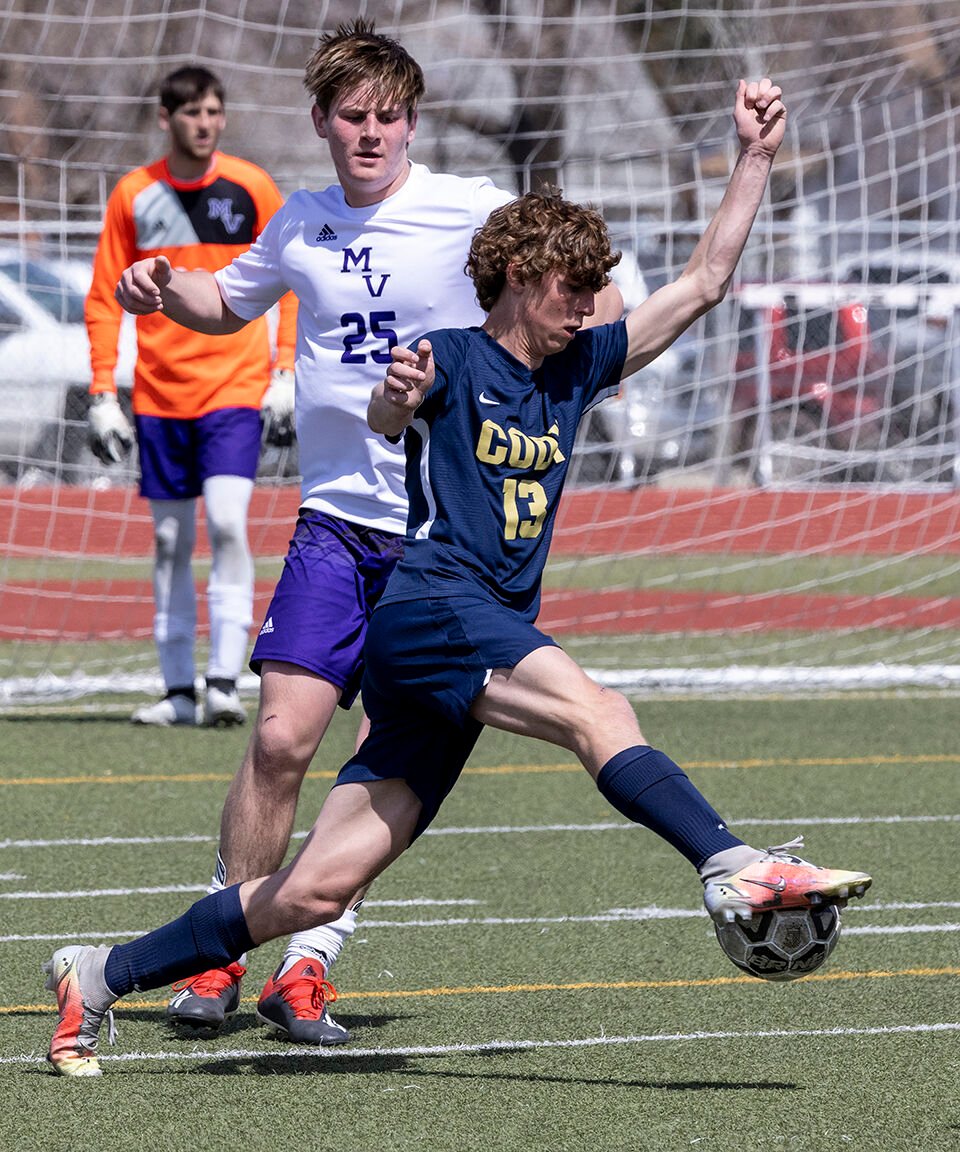 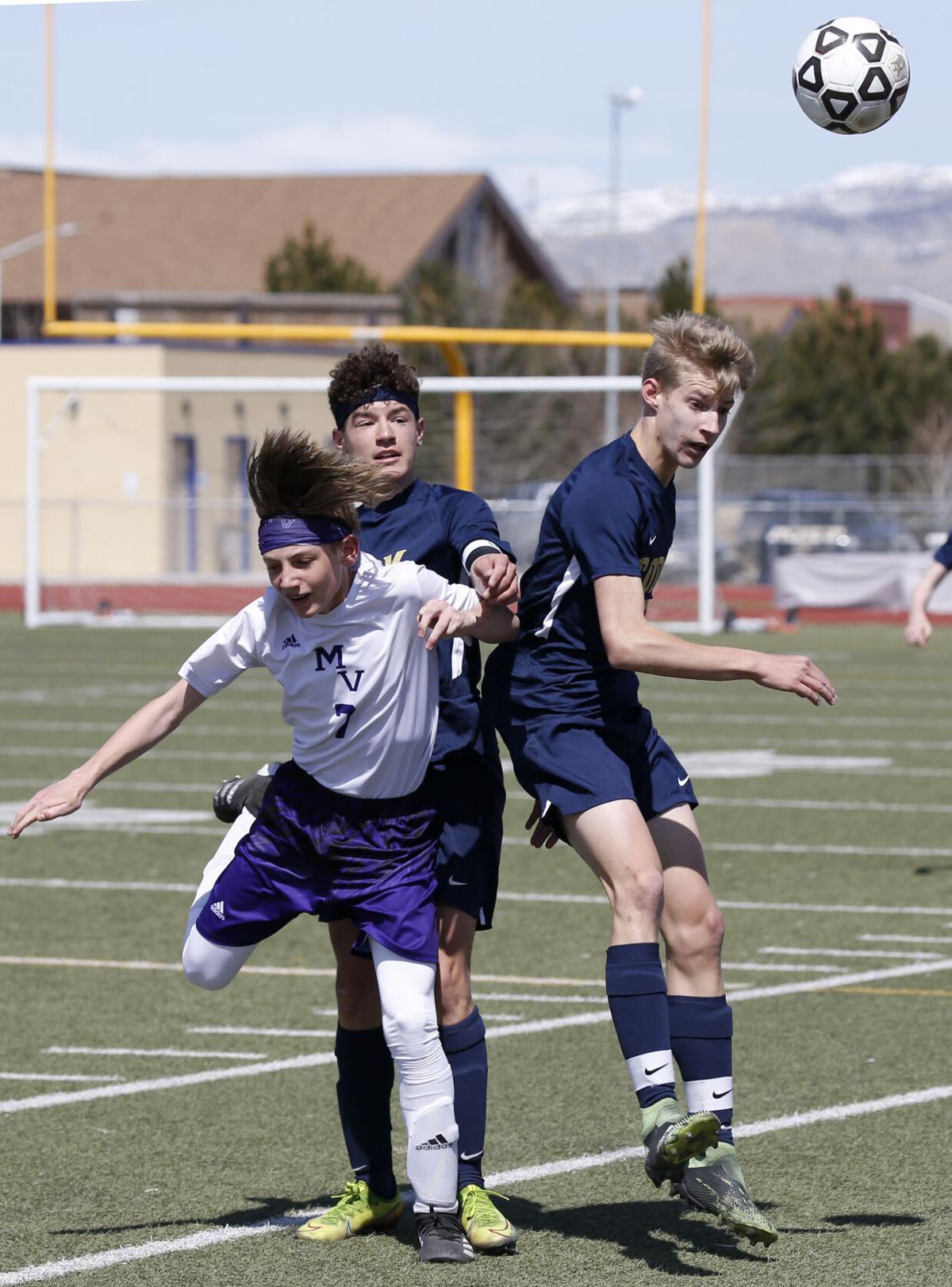 Wyatt Becker and Hunter Robbins both go the ball against a Mountain View player. 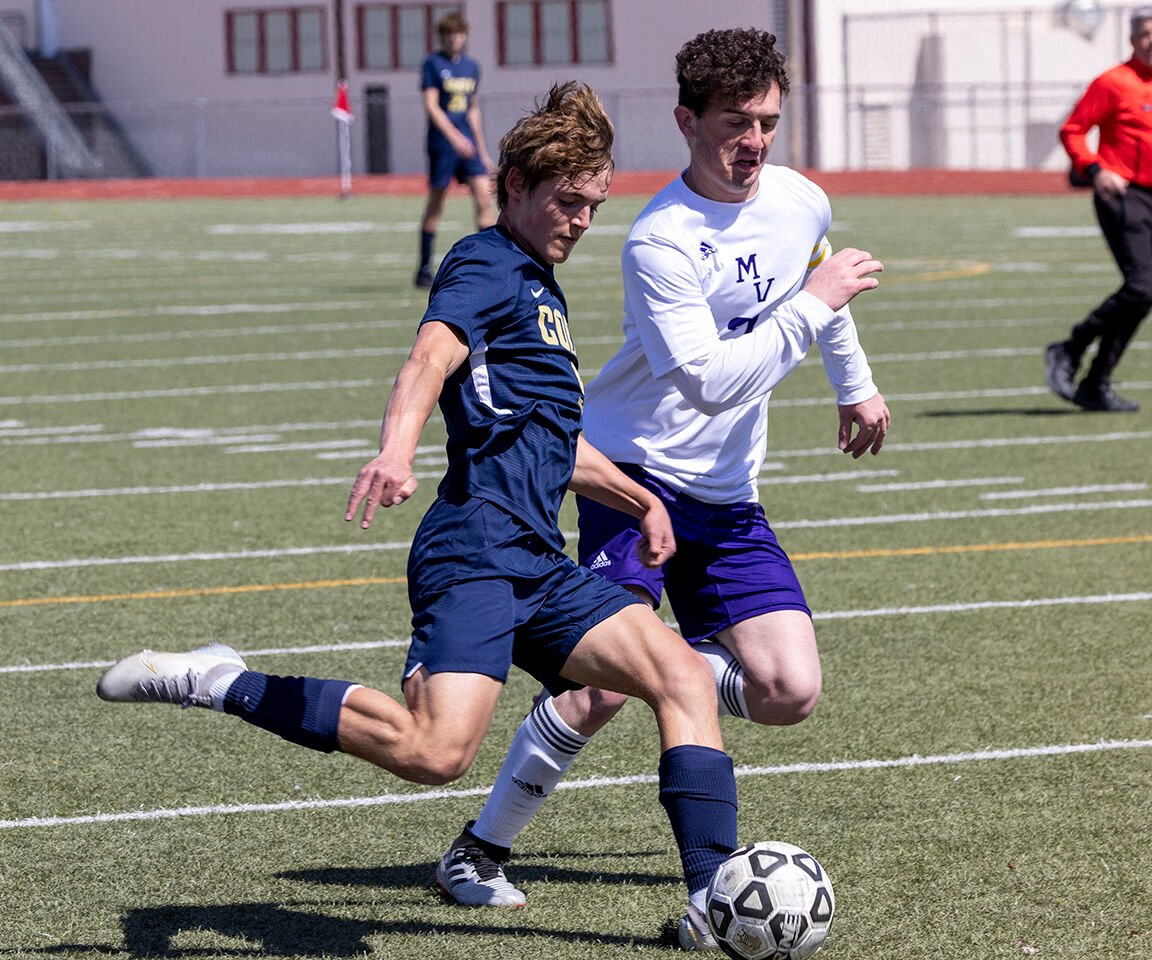 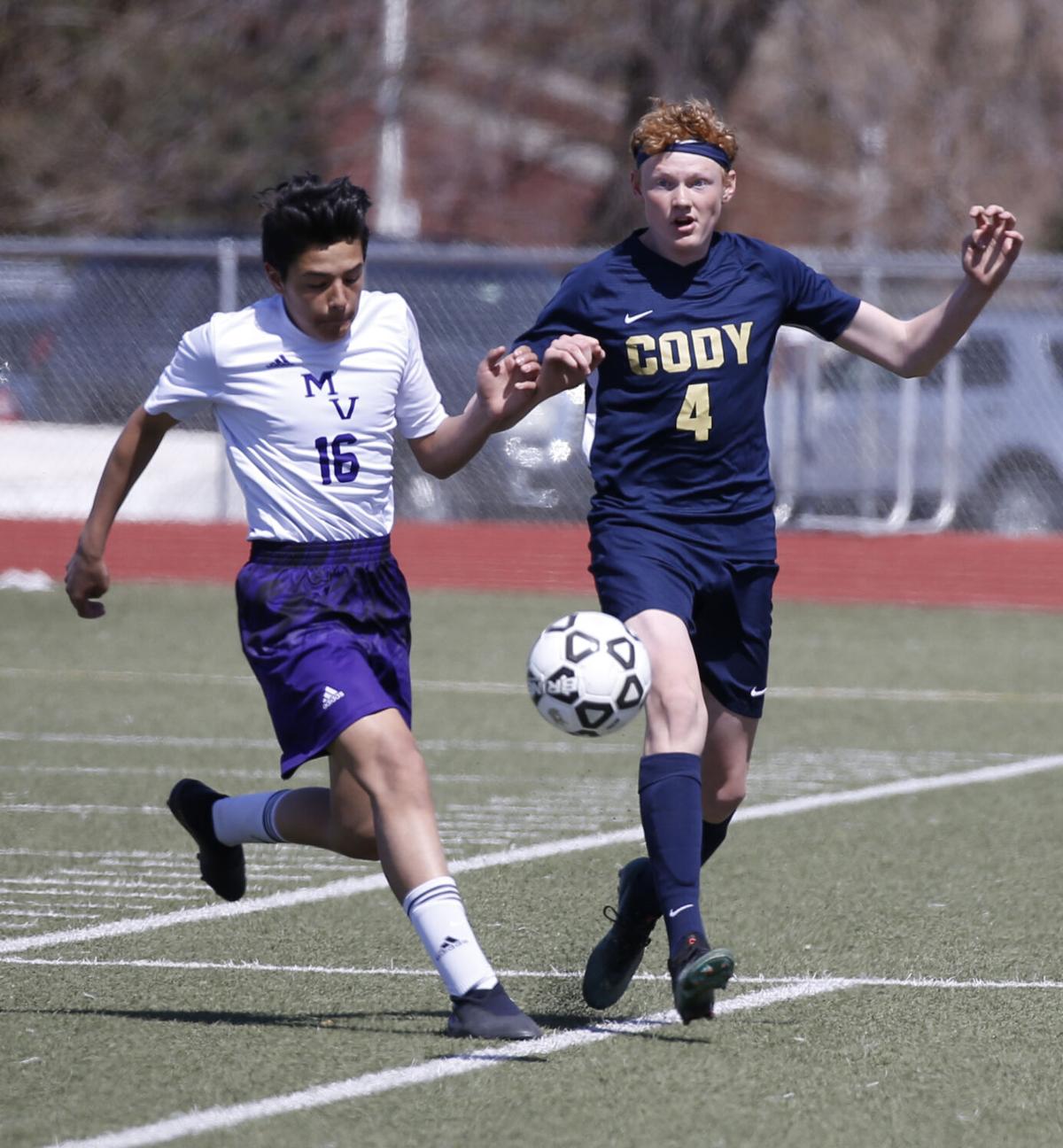 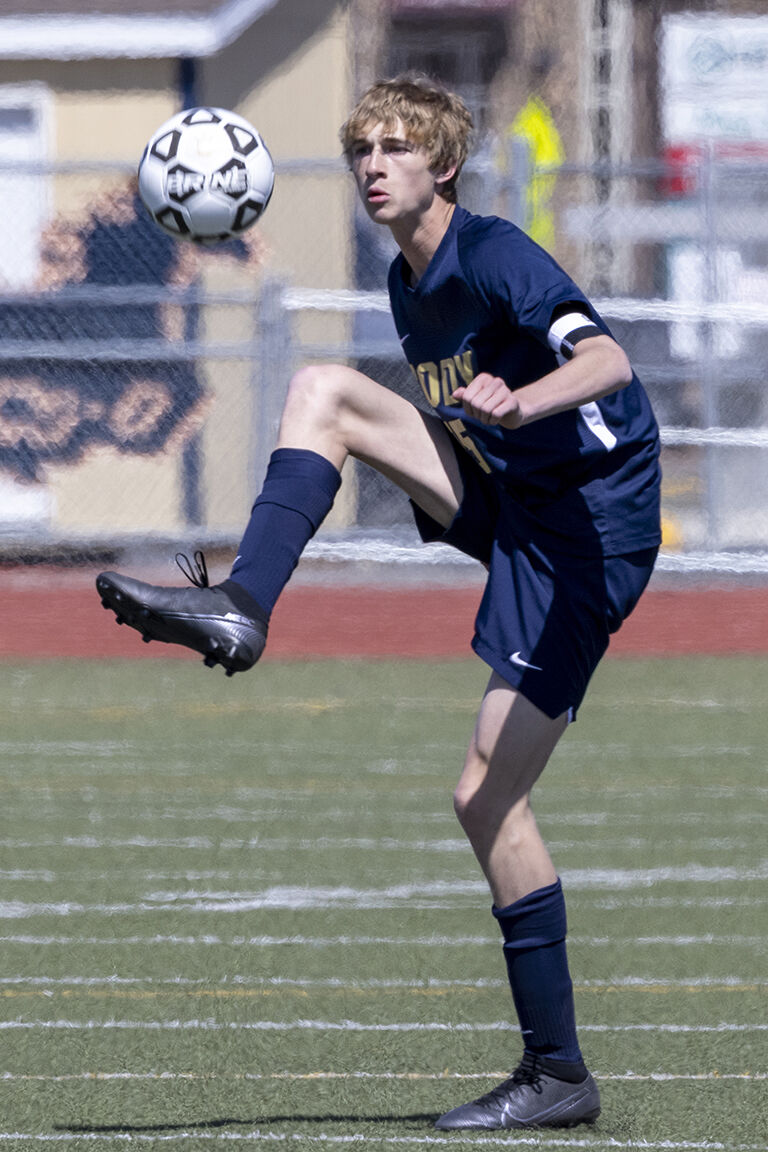 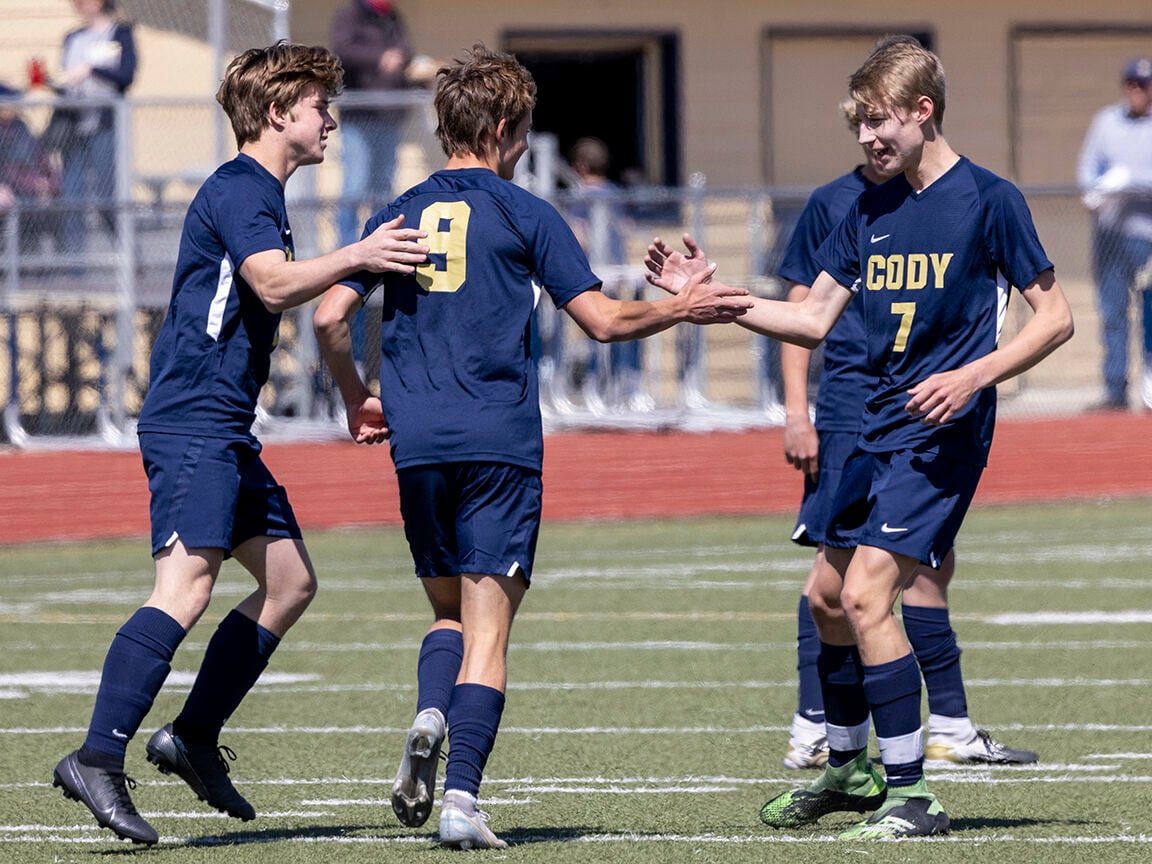 The Broncs celebrate after a goal by Matt Nelson. 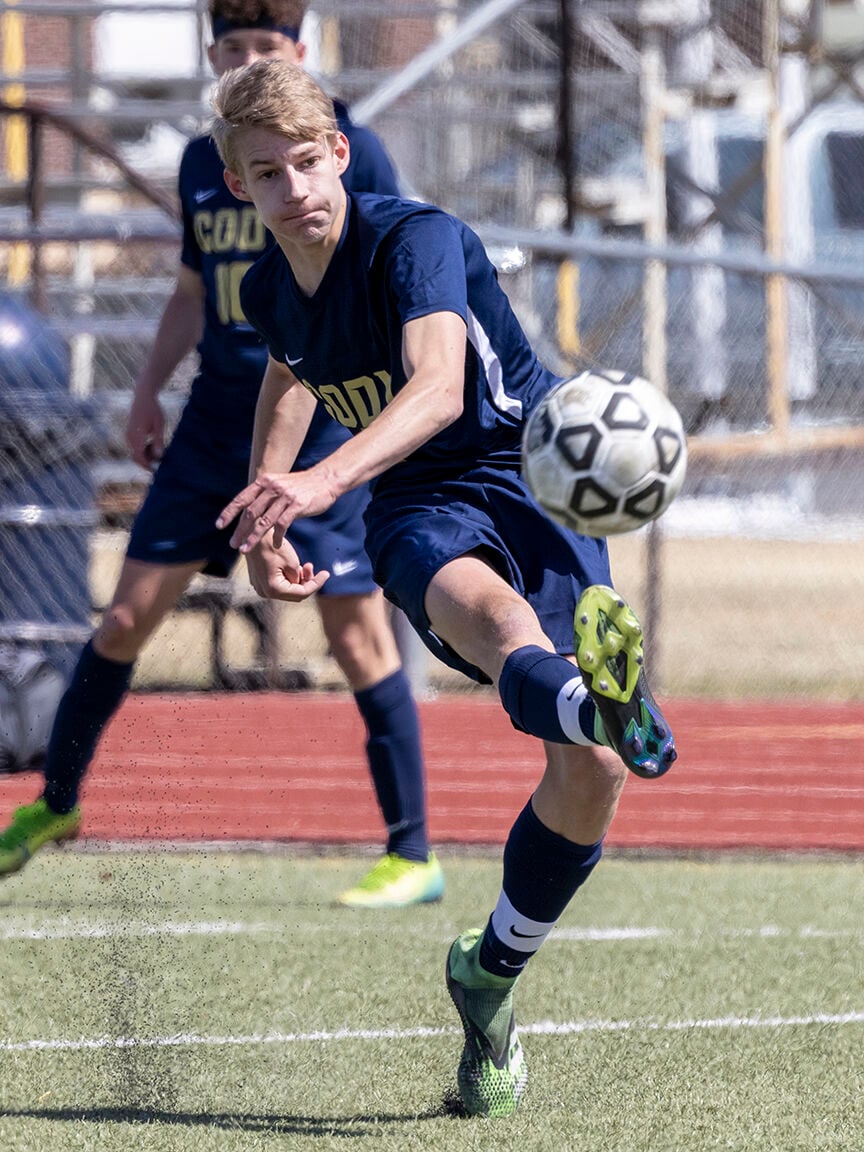 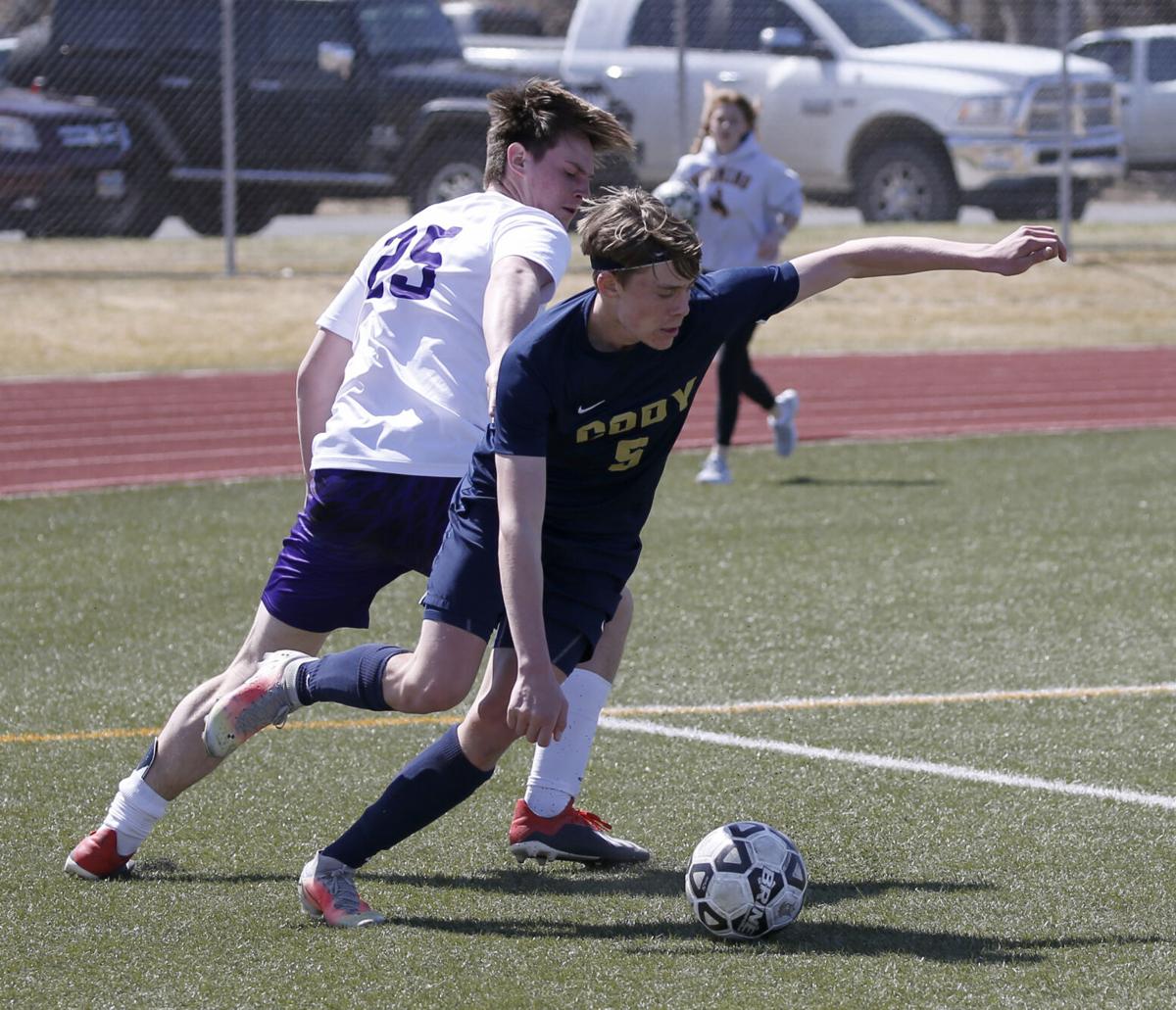 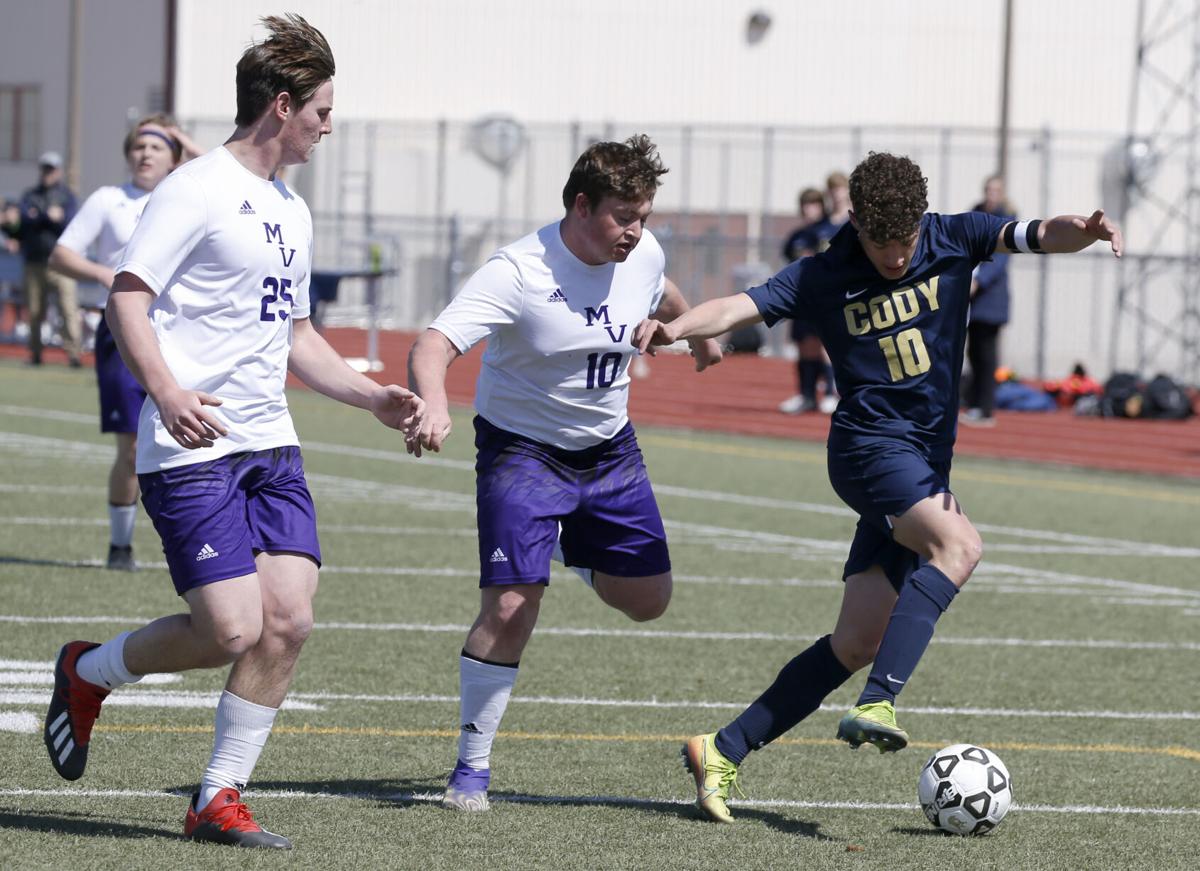 Wyatt Becker pushes the ball to the outside. 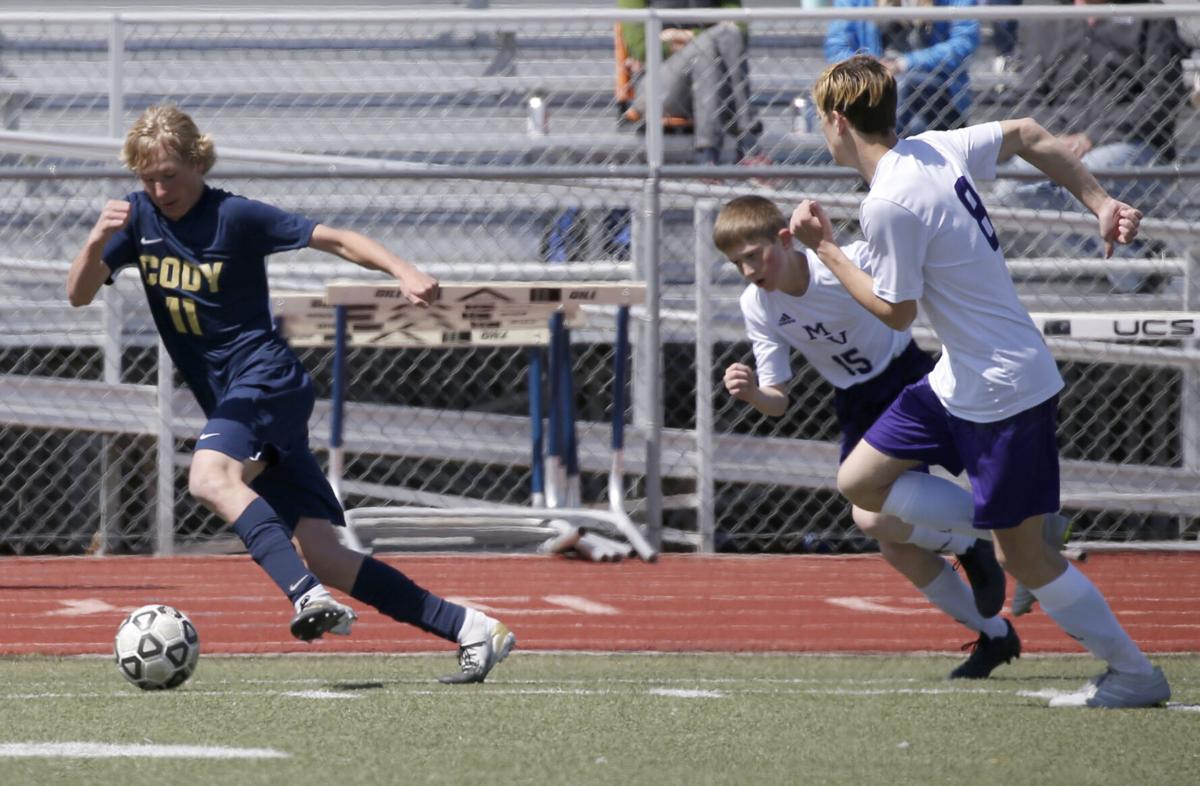 Wyatt Becker and Hunter Robbins both go the ball against a Mountain View player.

The Broncs celebrate after a goal by Matt Nelson.

Wyatt Becker pushes the ball to the outside.

It had been nearly a month since the Broncs had lined up on their home turf for a soccer match, an ugly loss to Powell in the season opener. After losing to the Panthers the day before, Mountain View came to town on Saturday afternoon and was dismantled. Cody left the field with an 8-0 victory and two Broncs recorded hat tricks.

“I feel good about that one,” coach Randy Rockey said. “It was a great team effort.”

From the opening whistle, the No. 4 Broncs (5-1) were in total control. They played nearly the entire match on the Mountain View side of the field, putting heavy pressure on the shorthanded Buffalo squad. It didn’t take long for the constant probing to yield a goal for the Broncs, a powerful shot on the ground from sophomore Matt Nelson in the 13th minute that dribbled between the keeper’s knees and into the net. The flood gates were open after that.

Nine minutes later, junior forward C.J. Dominick found the back of the net on an assist from senior Jackson Gail. A minute after that, Nelson got his second goal. Not one to be left out, senior midfielder Hunter Robbins hit a cross-body laser to the far post in the 34th minute to give the Broncs a 4-0 lead at the half. Mountain View didn’t attempt a single shot in the first 40 minutes.

“I think our counterattack is really good and I feel like we’ve been working together a lot more as a team lately,” Dominick said. “We’re putting things together as the season goes on and building chemistry.”

The second half was more of the same for the Broncs, doing their damage on the Buffalo side of the field. Dominick was the first Cody player to nab a hat trick this season, scoring goals in the 43rd and 50th minutes to achieve the feat. A bit of confusion from the Mountain View defensive line turned into an own goal in the 53rd minute to give the Broncs a 7-0 lead. Not to be outdone, Nelson, who has four goals on the year, completed his hat trick in the 62nd minute for the final Bronc goal of the game.

The forfeit by Lyman on Friday and the victory over Mountain View extend the Bronc win streak to five matches. It was the Broncs best offensive performance so far, evidenced by the wide margin in shots taken between the teams. Cody took 44 shots on goal in the match. Mountain View took two.

“Before the match, I talked to them and I said, ‘The last time we were on this field, it was 9-1, so set the record straight,’ and they did a great job doing that,” Rockey said.

A big reason for that was the defensive line. Though Rockey said there are still a few kinks to work out, the four deep backs stopped almost every counterattack effort at midfield.

“It feels pretty good to get a shutout and have the defense over on our offensive side of the half,” sophomore Tade Geving said.

The Broncs are next in action against Worland on Tuesday night. The Warriors are one of two undefeated teams left in 3A soccer.

Cody then hosts Pinedale on Friday at 5 p.m. and Lander on Saturday at noon.