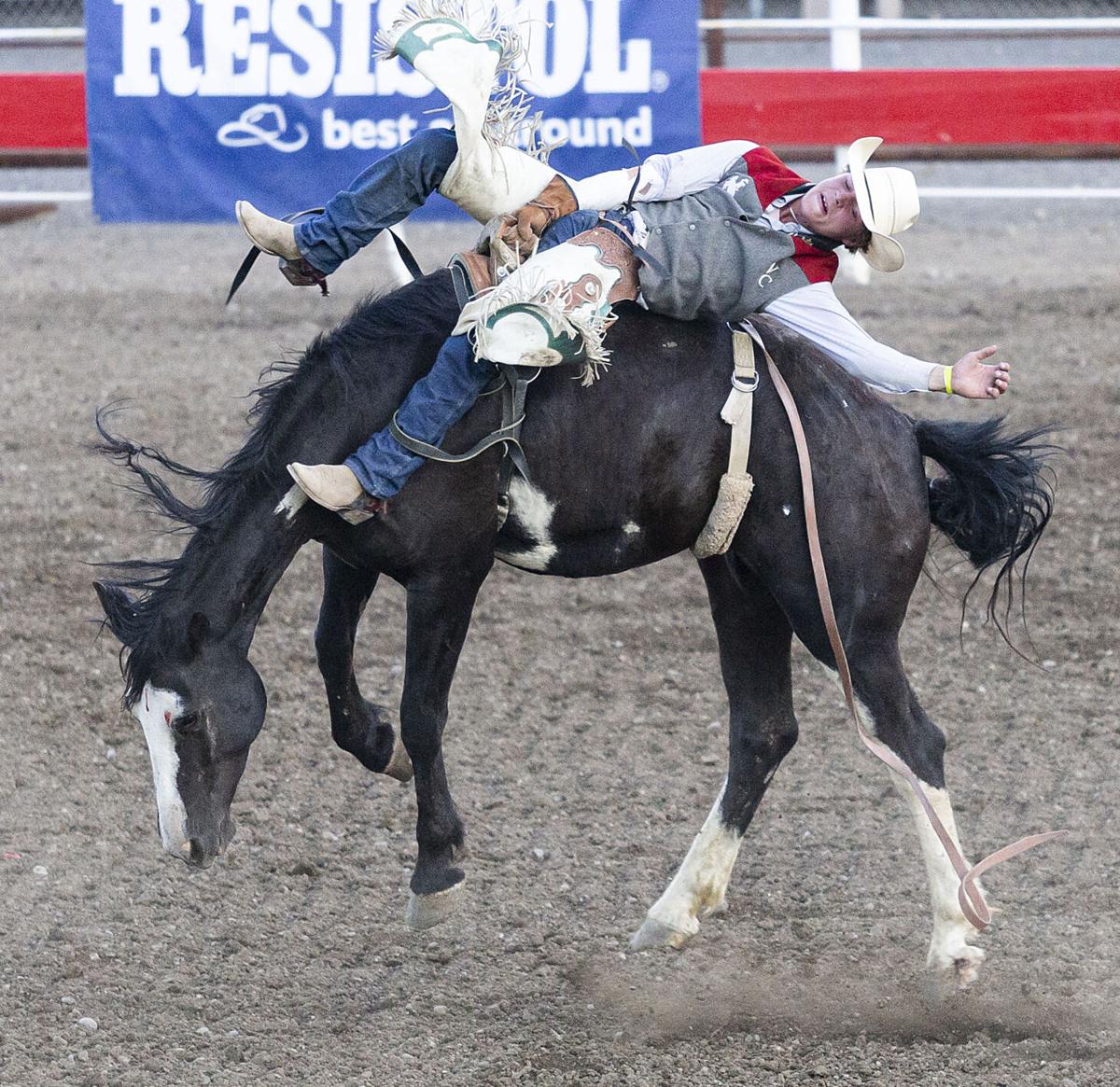 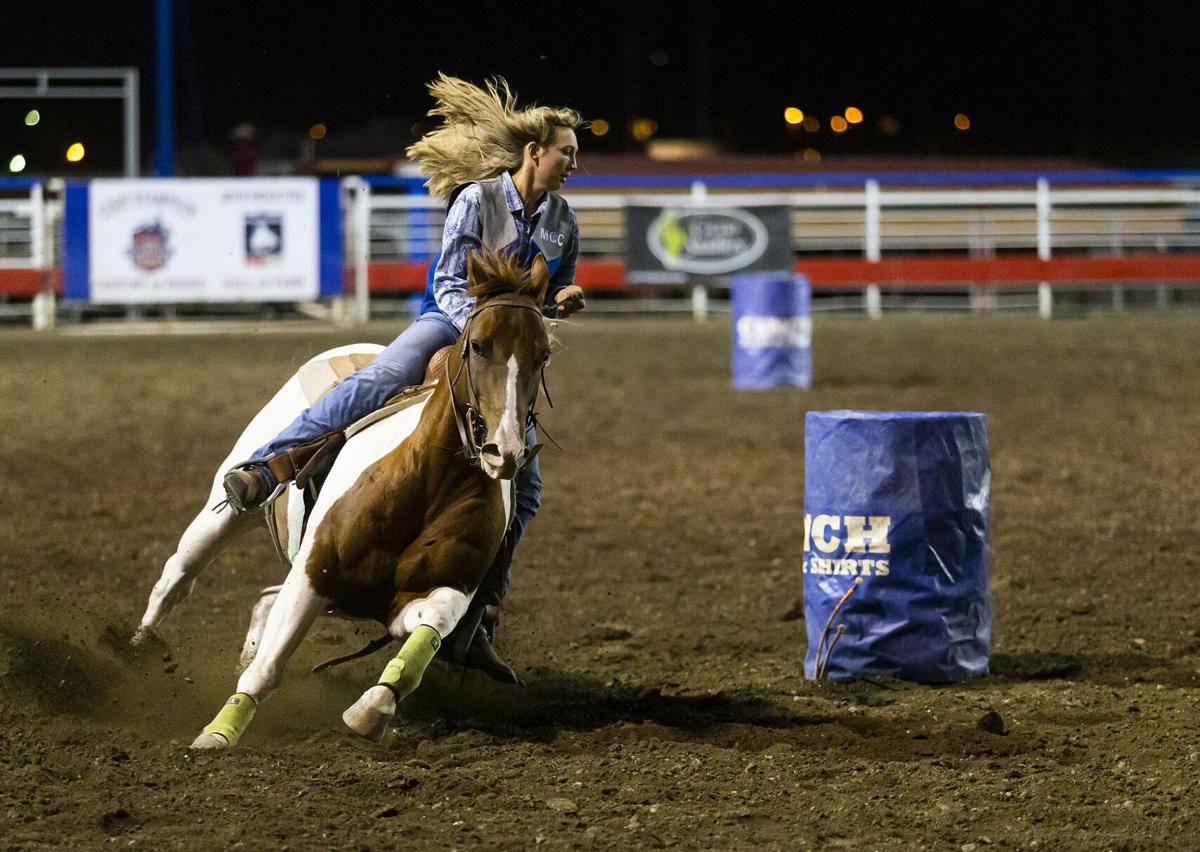 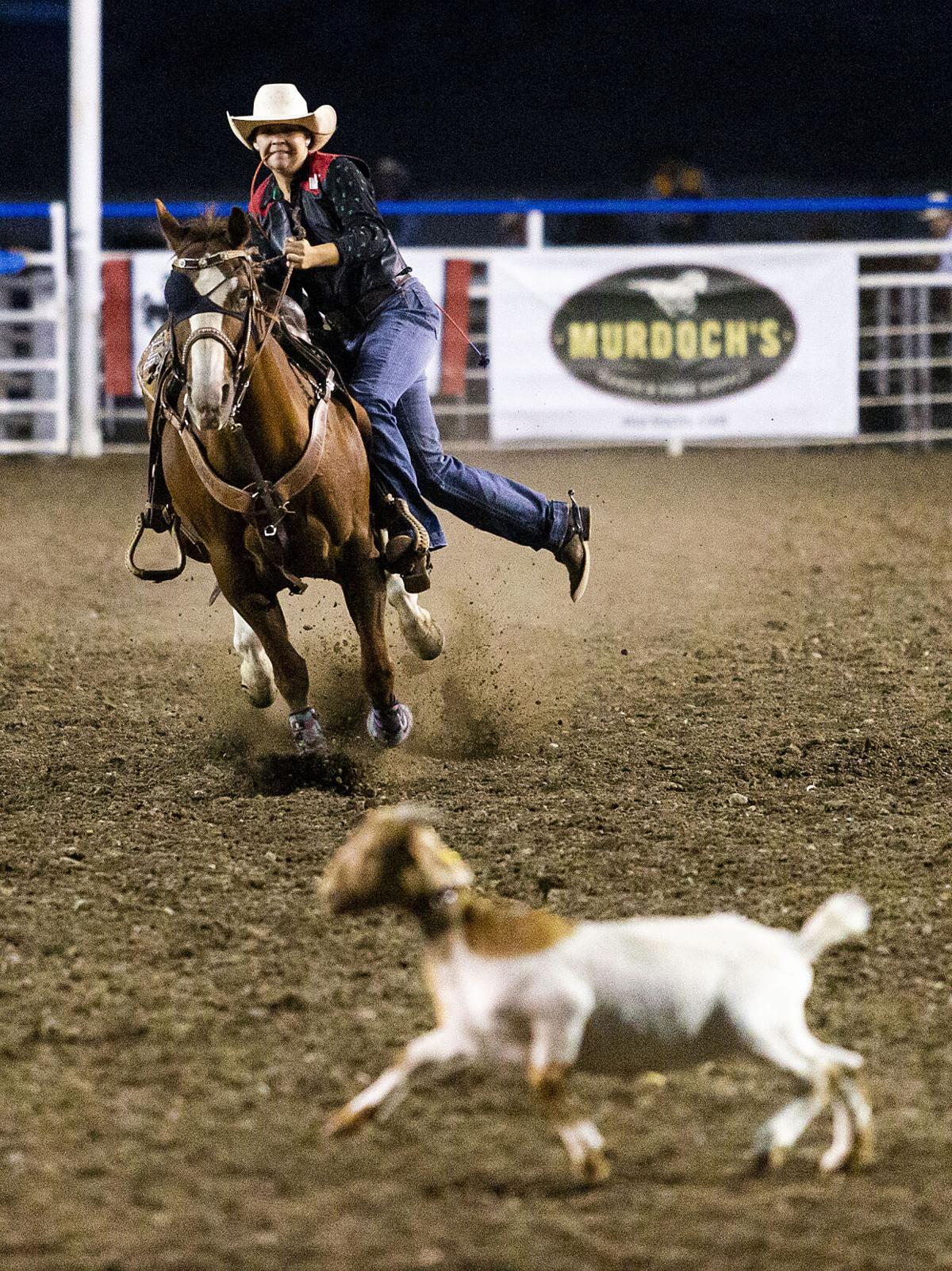 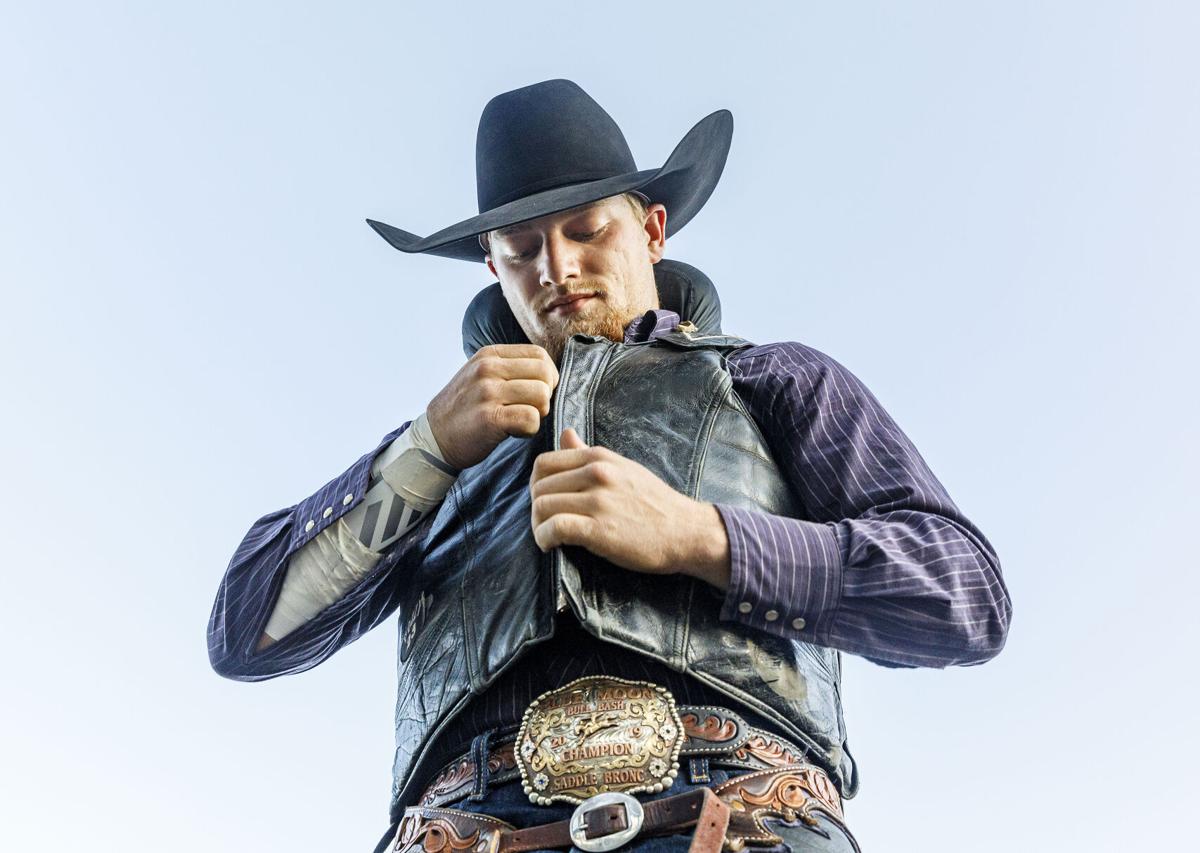 Judd Applegate puts on his vest before competing in bronc riding at the Trapper Stampede Rodeo at Stampede Park on Saturday, September 12th. 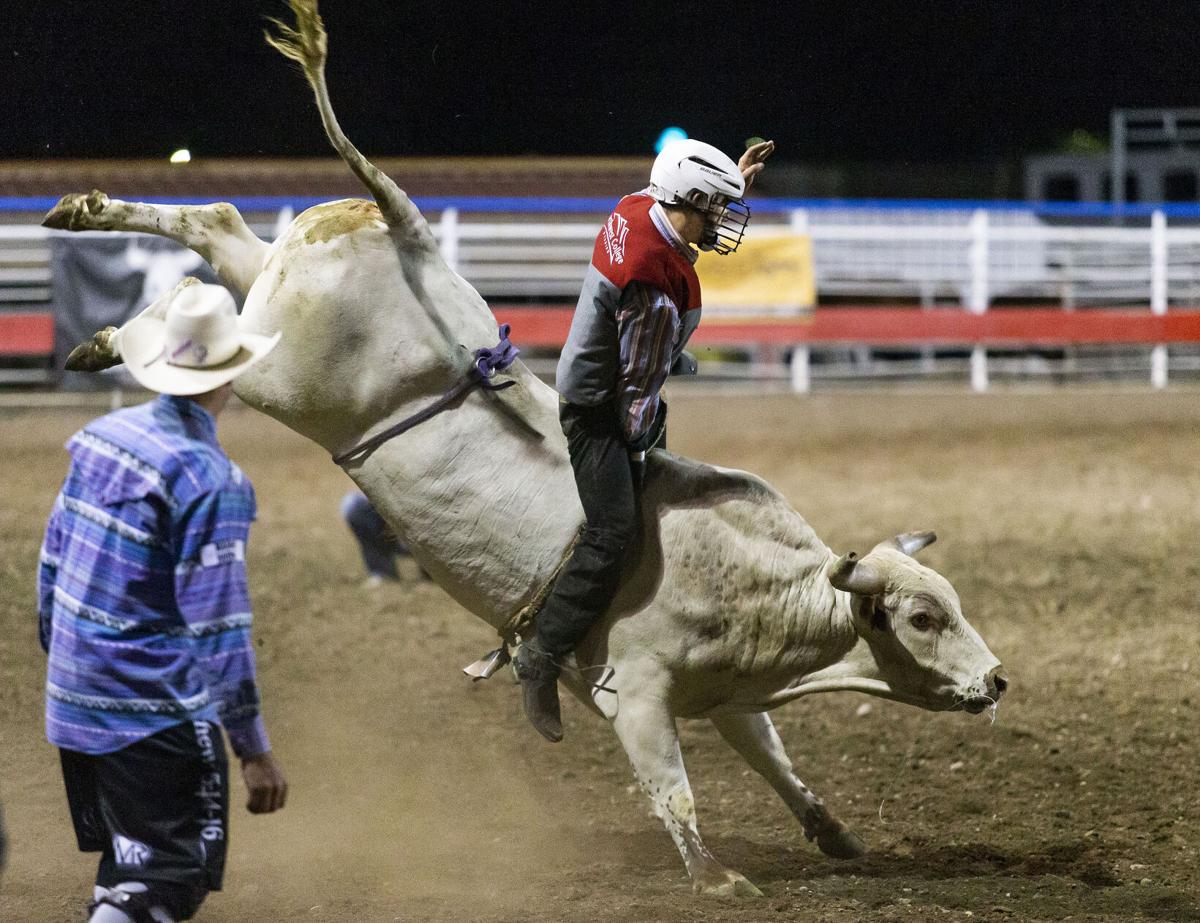 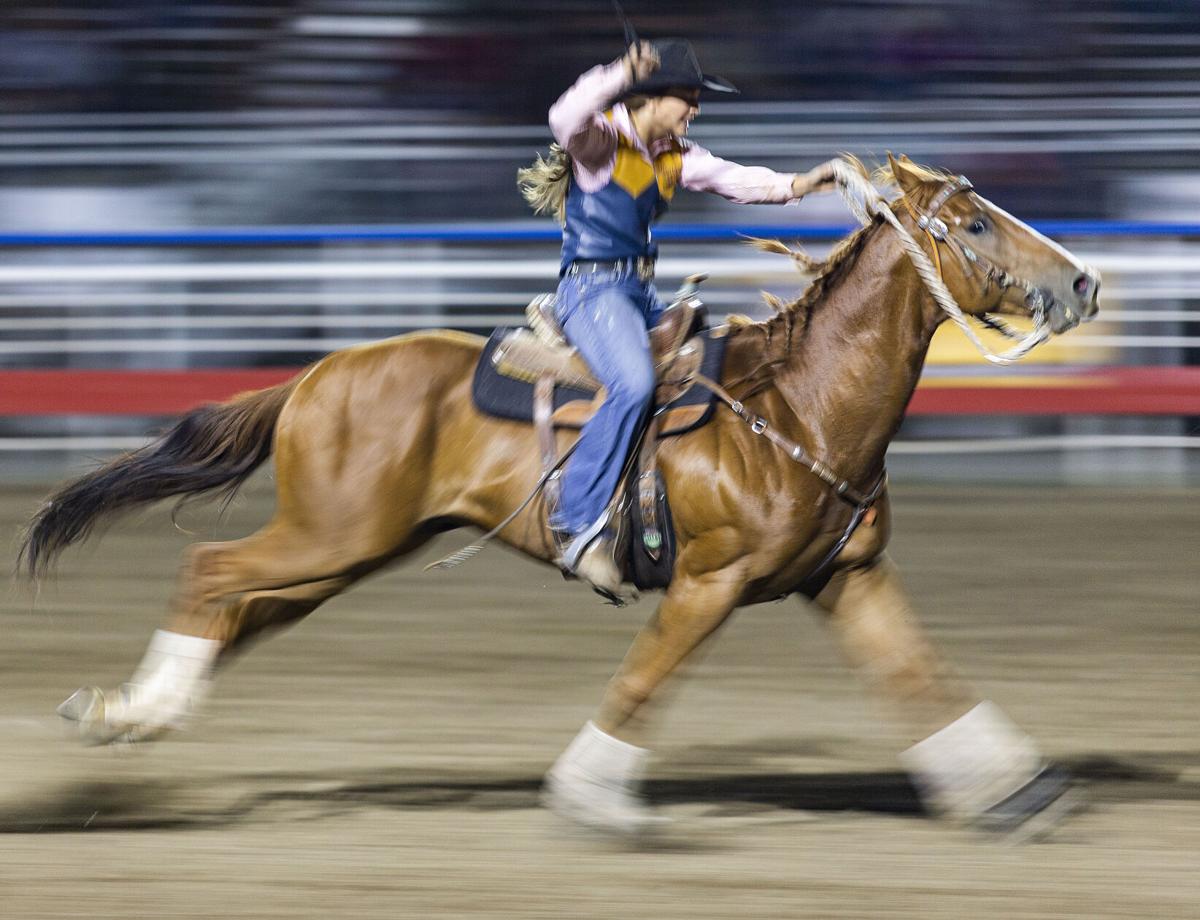 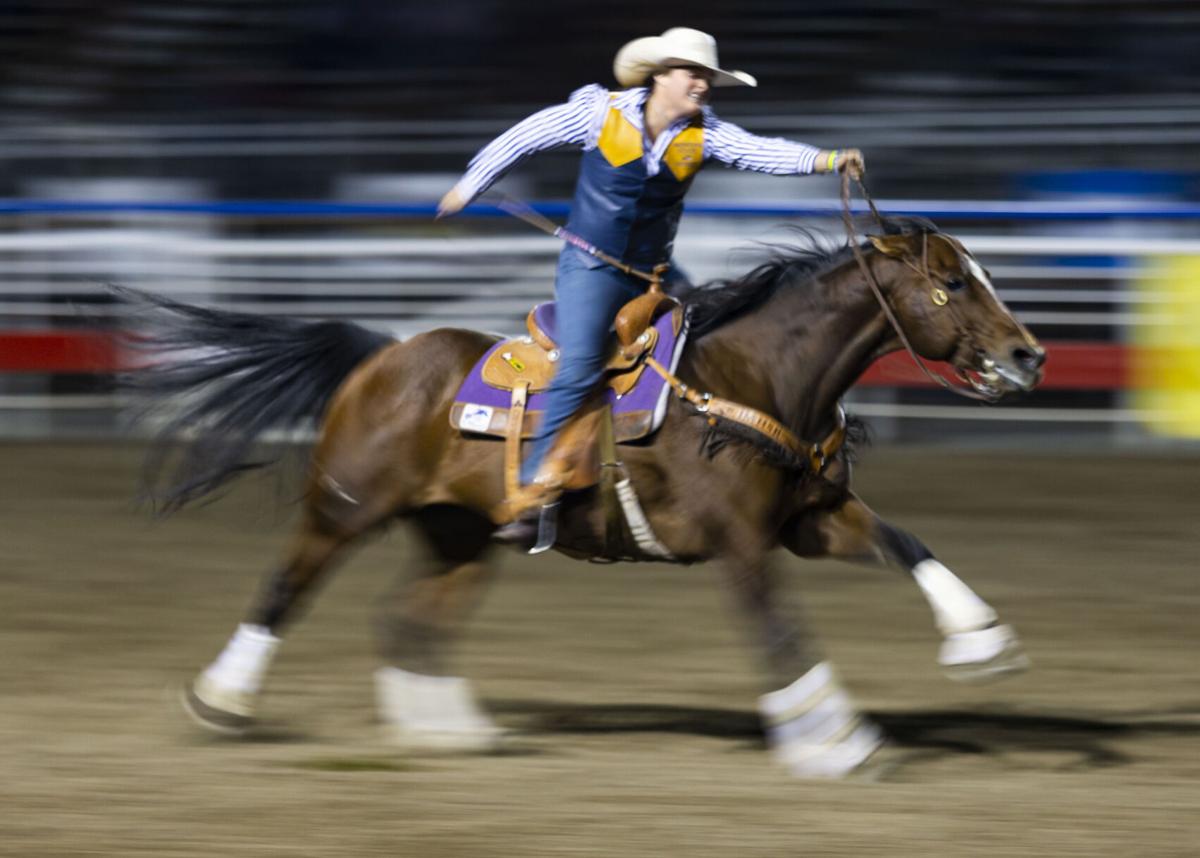 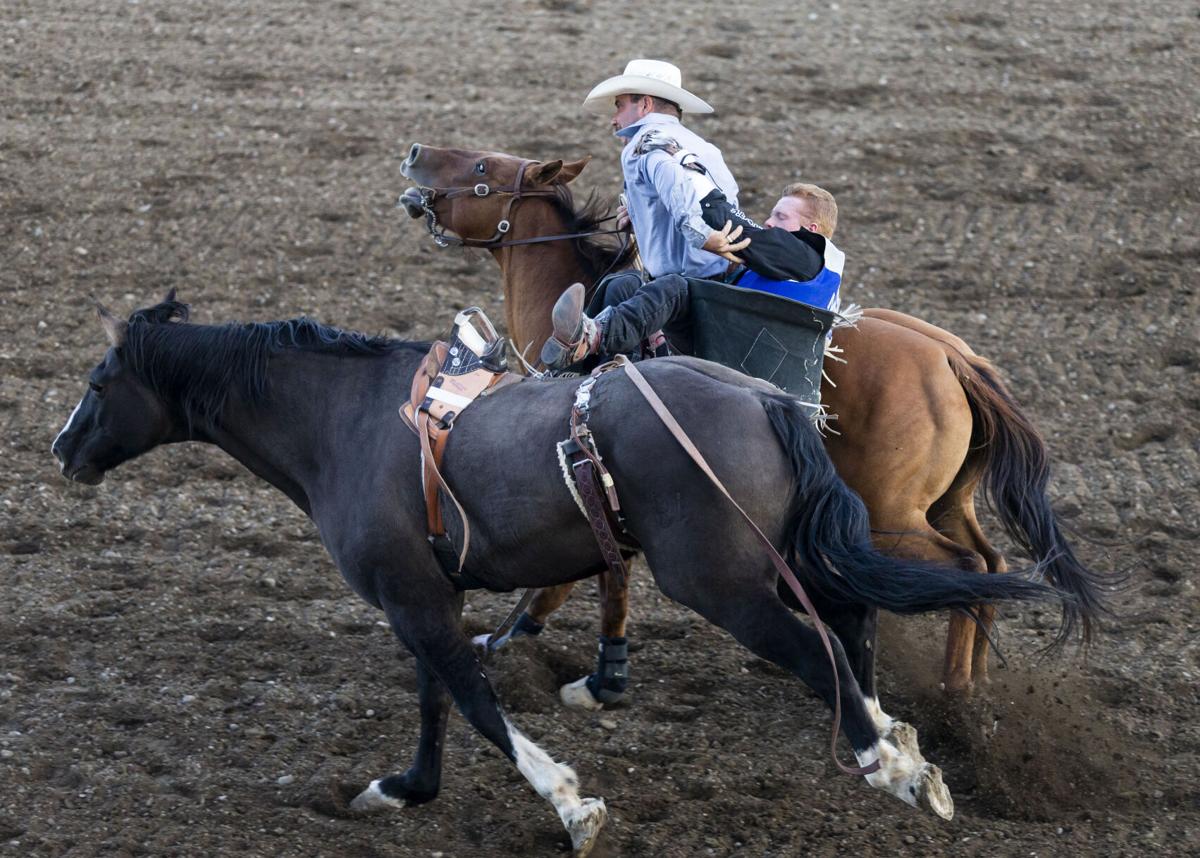 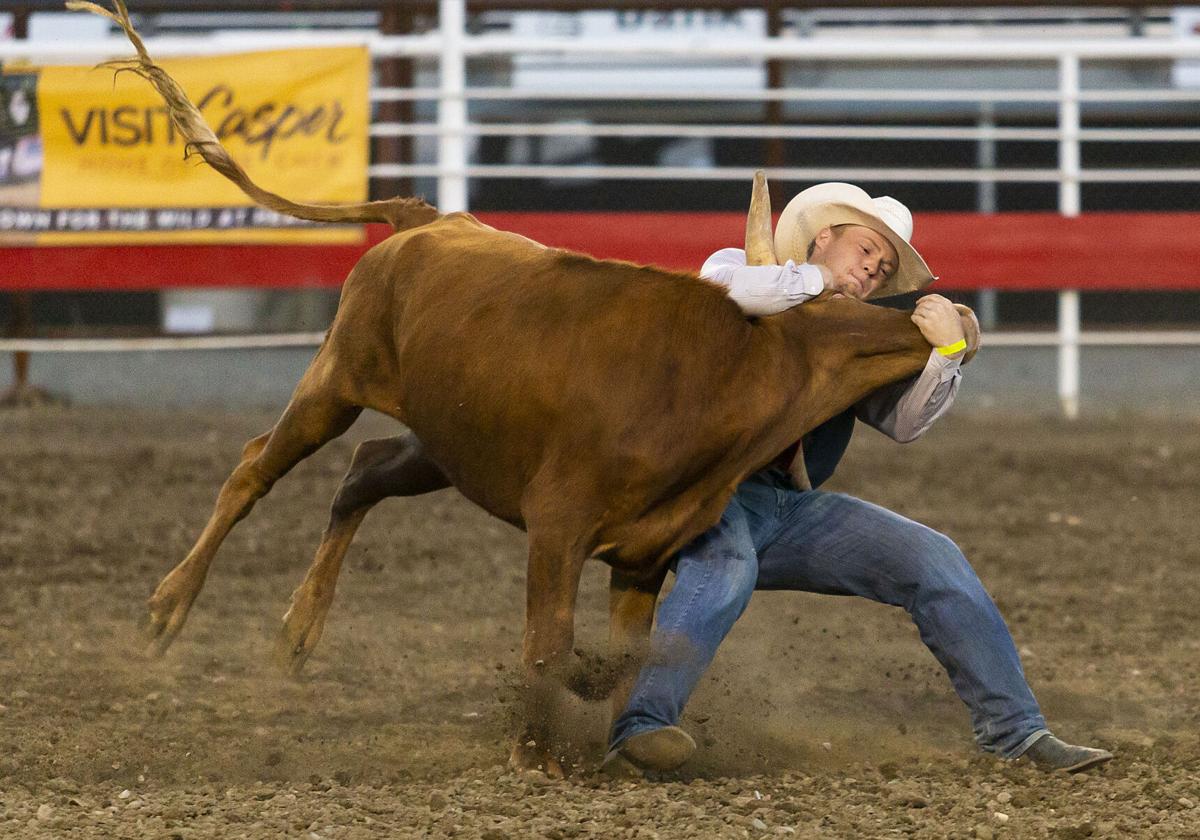 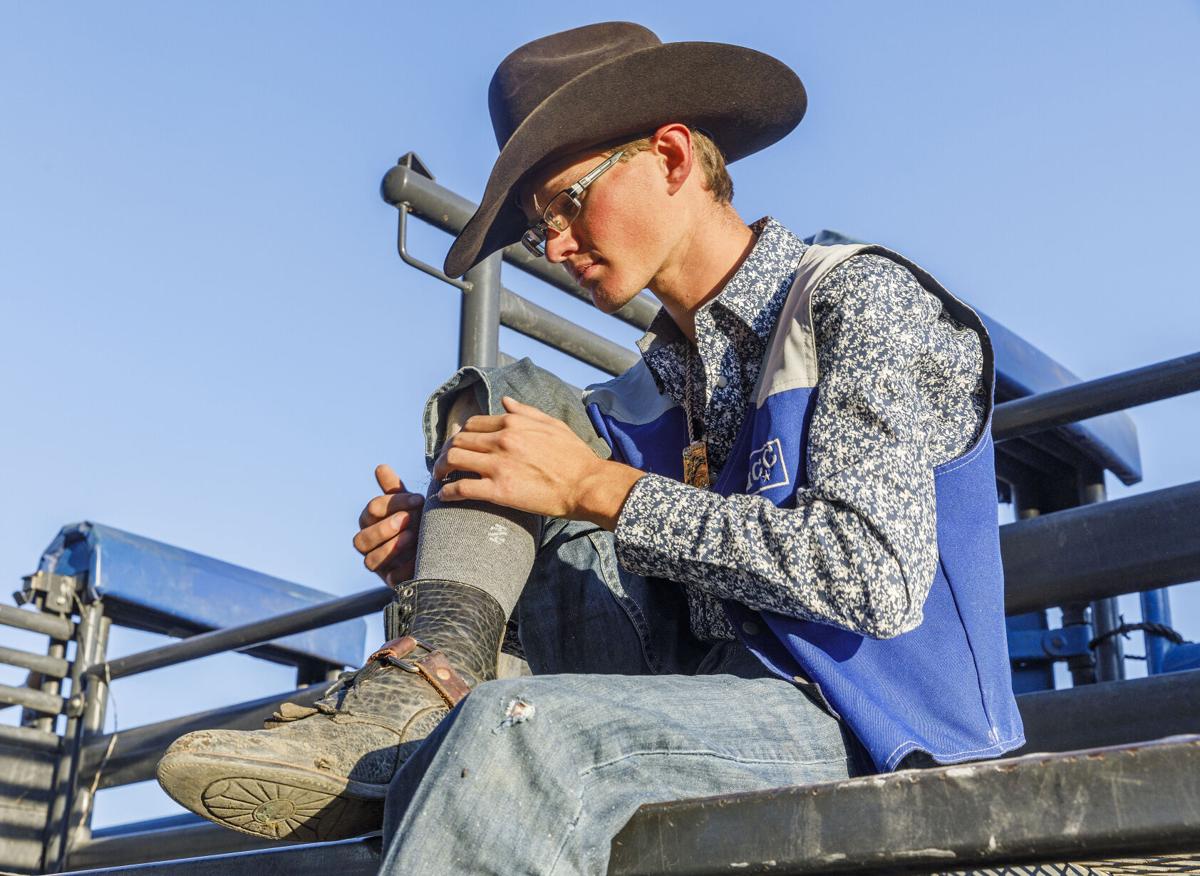 Carson Houser puts his shoes on before competing in bull riding at the Trapper Stampede Rodeo at Stampede Park on Saturday, September 12th.

Judd Applegate puts on his vest before competing in bronc riding at the Trapper Stampede Rodeo at Stampede Park on Saturday, September 12th.

Carson Houser puts his shoes on before competing in bull riding at the Trapper Stampede Rodeo at Stampede Park on Saturday, September 12th.

“Some things clicked tonight and some things didn’t,” he said.

The NWC rodeo team finished third out of the seven teams at its annual Trapper Stampede Rodeo on Saturday night. In the Friday night rodeo, the Trappers took third.

Nose said this season will be a rebuilding one for his team and he just wants his athletes to focus on improving. But none of that is to say there weren’t a few bright spots to be had at the home event.

Northwest’s Austin Herrera won bull riding on Friday with a score of 84.

“I just got a nice little buck and went in hard,” he said.

With a little more focus in practice, Herrera said the team will start growing.

That progress started to show by Saturday when Cody Weeks took second in saddle bronc, edged by a single point for first by Judd Applegate of Montana State.

“Sometimes it feels like it takes forever for the buzzer to ring and then other times it’s like you’re sitting in a rocking chair, feels like you could ride him all day,” Weeks said.

He was nothing but smiles after his 75-point ride. He has been competing in rodeo since he was in eighth grade, growing up in Malad, Idaho.

With the fall rodeo season in doubt for months, Weeks said he’s just happy to have the opportunity to compete for his school and, “buck horses.”

“It was the best run I had in awhile,” he said.

His teammate Cole Biggers also competed in saddle bronc and was having a ride in saddle bronc that was easily in contention for first, but then touched his hand to the horse when it leapt two feet off the ground, thereby counting the ride as a no score.

About a month before he moved to Powell, Biggers lost all his rodeo gear in a house fire. Then on Sept. 7, his truck was broken into while parked at Northwest College and his gear was stolen again.

Now, he’s just trying to get back in the rodeo rhythm and make up for lost time.

“If you can’t tough it out for eight seconds you shouldn’t be doing this sport,” Bradshaw said.

Hailey Davis, a freshman from Spokane, Wash., finished second in breakaway roping with a time of three seconds.

“It was goodish,” Davis said nonchalantly. “I just forgot to move my feet like I should’ve.”

Davis said she was startled when encountering the uptick of rodeo participants in Park County when compared to Washington.

“It’s a lot different, it was kind of weird,” she said with a smile.

The Bobcats from MSU were dominant in both rodeo nights. Starring for that team were Shelby Rasmussen and Samantha Kerns who took third overall in the coed team roping division.

Rasmussen and her younger sister Paige Rasmussen both sang the national anthem to start the night on Saturday.

“I was nervous, but I don’t think she was,” Shelby Rasmussen said of her sister.

“No, I was more nervous,” Paige Rasmussen replied.

They were tuning their vocal cords for a much bigger upcoming performance, set to sing the anthem at the Professional Bull Riders Ariat Invitational in Billings on Sunday, the biggest event the pair had ever sung at.

Shelby Rasmussen, one of the region’s top female rodeo athletes and a 2019 College National Rodeo Finals qualifier said she sees many similarities between singing and rodeo.

“The focus of having to block everything out is the same,” she said.

One individual who did have to sit out Saturday’s Stampede was Camron Plaisted, who had a bull step on his leg on Friday.

Plaisted, a freshman, competed in Cody Nite Rodeo during the summer but said collegiate rodeo has a different feel.

“A lot of us were just having some first rodeo jitters,” Plaisted said.

Rodeo is the only collegiate sport taking place right now in the West, and the West Coast, Northwest, Grand Canyon and Southern rodeo regions are still not having a fall season.

The Trappers will saddle up for their next rodeo this weekend at the University of Montana Western Rodeo in Dillon, Mont.

“They’ll have about 15 minutes to think about it (last rodeo) before the next rodeo,” Nose said.