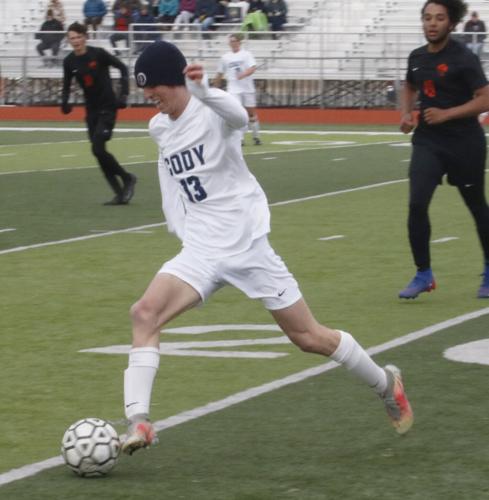 Jackson Gail tries to get the Broncs on the attack after a steal on Friday in Powell. 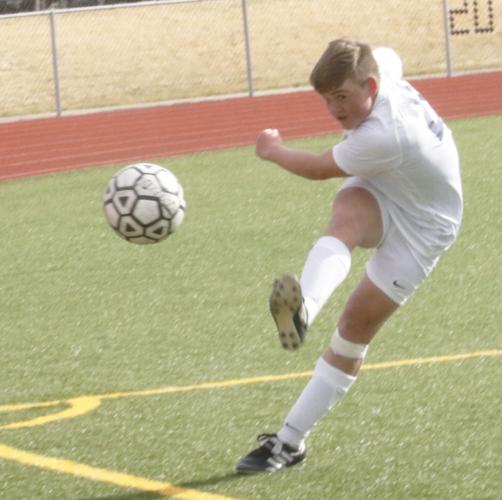 Bronc Conner Moss helps stop a Panther attack in the first half of Cody's Friday evening matchup with Powell.

Jackson Gail tries to get the Broncs on the attack after a steal on Friday in Powell.

Bronc Conner Moss helps stop a Panther attack in the first half of Cody's Friday evening matchup with Powell.

Going to Powell and pulling out the upset for the Cody boys soccer team would have been hard enough, but against a punishing wind and missing standouts Matt Nelson and Carter Gail, plus a questionable Jackson Gail, the challenge was that much greater.

The Broncs made an effort but couldn’t get the win, falling 3-0.

Jackson Gail did try to give things a go in the first half, but clearly wasn’t at 100%.

“I knew it was going to be a tough game,” coach Randy Rockey said. “We were missing players and with the wind it was just adversity on top of adversity. It was a chance to see how they would respond in kind of a team-building game.”

Nothing came easy for the Broncs against the wind in the first half.

Just getting the ball out of their own side of the field turned out to be a daunting task.

“I thought we played really well,” Rockey said. “We played defensive-minded and kind of sat back a little. I don’t know what you are suppose to do in a 50 mph wind.”

The defense held off the Panther attack for the first 20 minutes before Powell connected on their first goal.

They added a second score moments later to take a 2-0 lead as they took advantage of the wind at their backs and a short-handed Broncs squad.

The Panthers had a golden opportunity to go up 3-0 with 7:11 left in the first half on a penalty kick.

Bronc goalie Evan Owen’s diving save, however, kept the Panthers off the board.

Owen followed that up with another diving save just two minutes later.

“That was so good for Evan,” Rockey said. “It is so difficult to save a penalty kick as a keeper. That was so cool to see.”

The Panthers added a third goal before the end of the first half to take a 3-0 lead.

With the wind at their backs, the Broncs had some chances in the second half.

Around 10 minutes into the second, sophomore Colby Baylo bent a long shot toward the goal, but the Panther keeper managed to corral that attempt.

Remy Broussard just needed to tap a free kick from about 40 yards out to send it over the Panther defense to the front of the net, but again Powell managed to make the stop.

A free kick from CJ Dominick just rose over the Panther goal later in the half, only inches away from going in.

“It felt a little more even in the second half,” Rockey said. “I thought Remy had another great game. It put a lot of responsibility on your center back in that game and he responded really well.”

Broussard scored the lone goal for the Broncs last week in a 1-0 win over Pinedale as well in a rescheduled matchup.

With the wind affecting everything from free kicks to corner kicks to kicks from goalie to goalie, neither team could find a rhythm in a scoreless second half.

Some younger players did gain some valuable experience with three starters out, however.

“Connor Moss played great on the wing,” Rockey said. “Freshman Jarrett Christler was in Jackson’s spot and he did a great job. Fellow freshman Carter Thompson got some good time at right wing. They all played very well.”

The Broncs should be closer to full strength when they head to Lander on Thursday and host Lyman on Friday.

Nelson and Jackson Gail are expected to be back in the lineup, with Carter Gail set for a potential return the following week.

The Broncs played a close contest against Lander at home earlier in the season, falling 3-2 to the Tigers.