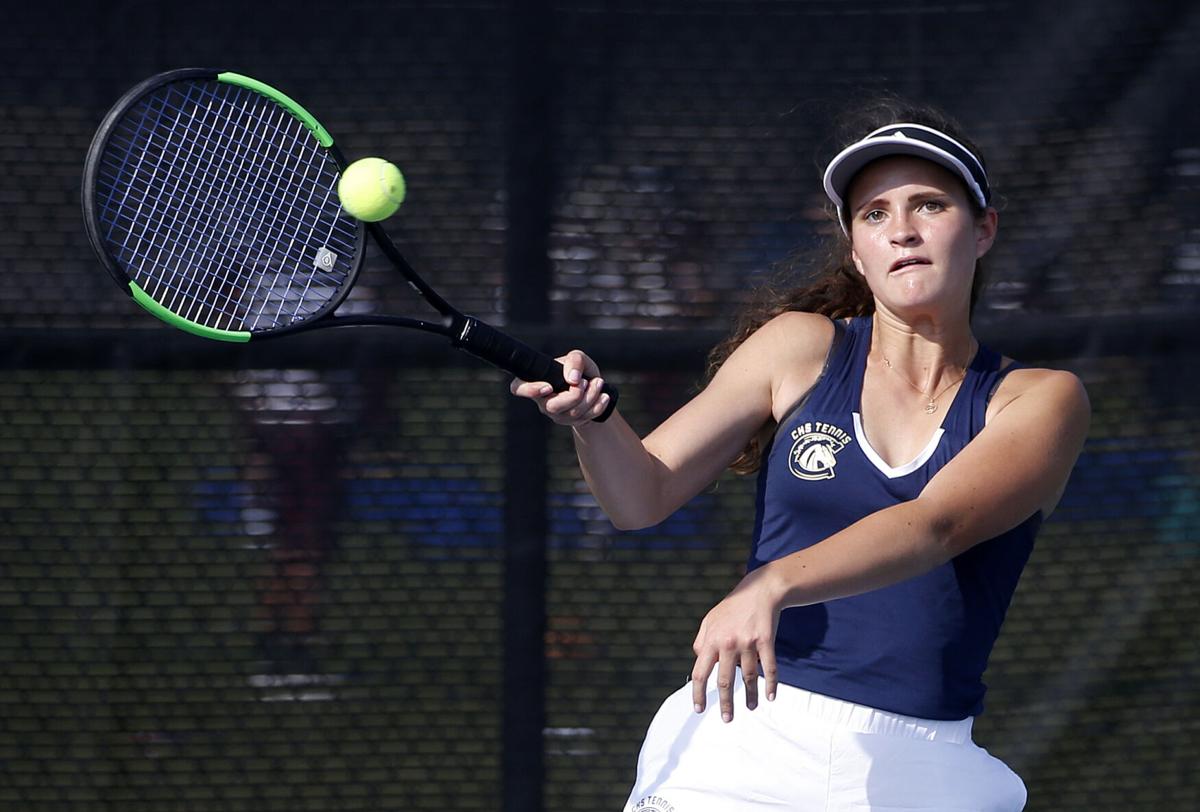 Soffy Anderson returns a serve in No. 1 doubles Thursday against Powell. The Fillies won 3-2 and the Broncs 5-0. 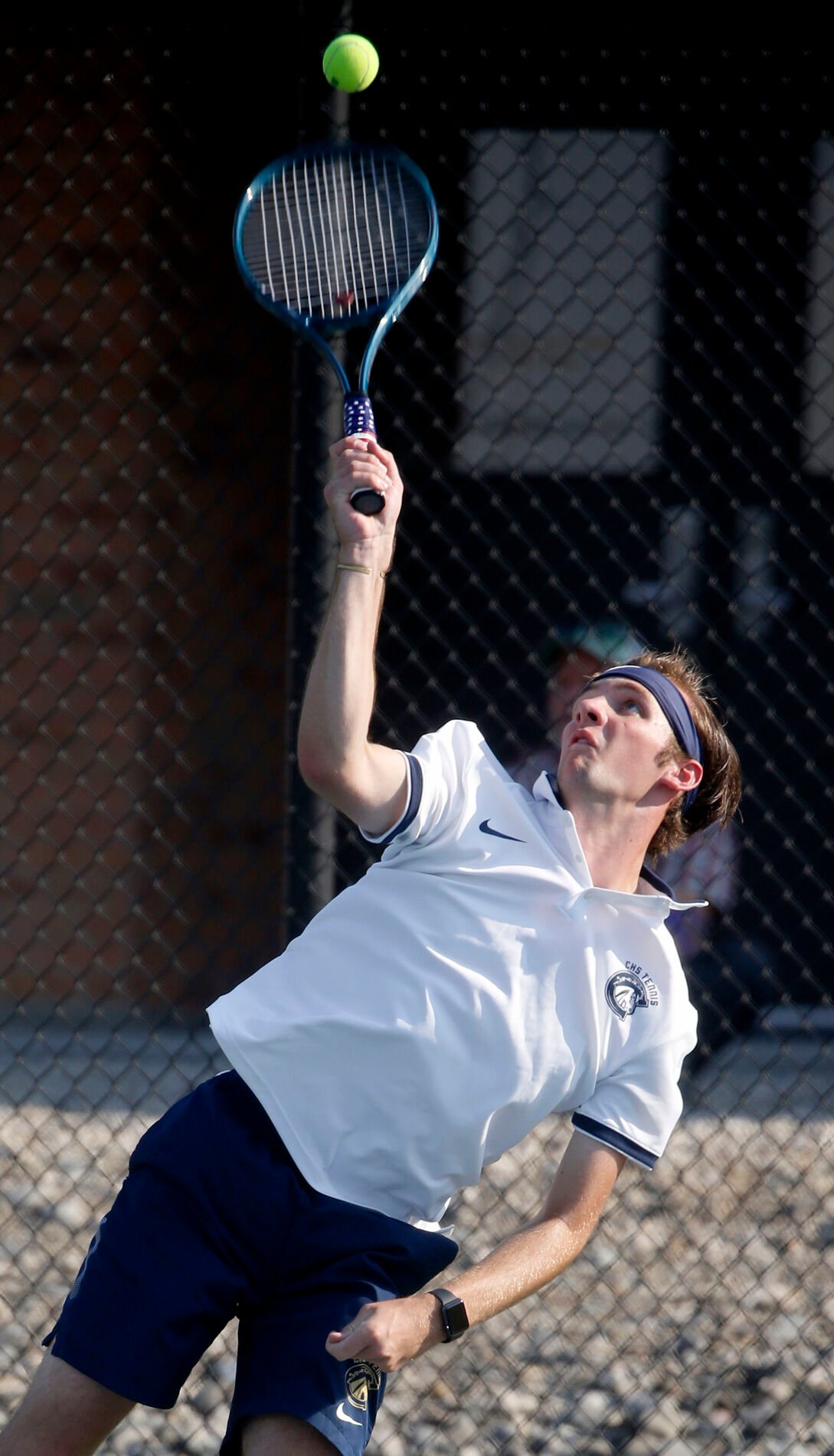 Neil Markert serves in No. 3 doubles Thursday against Powell. 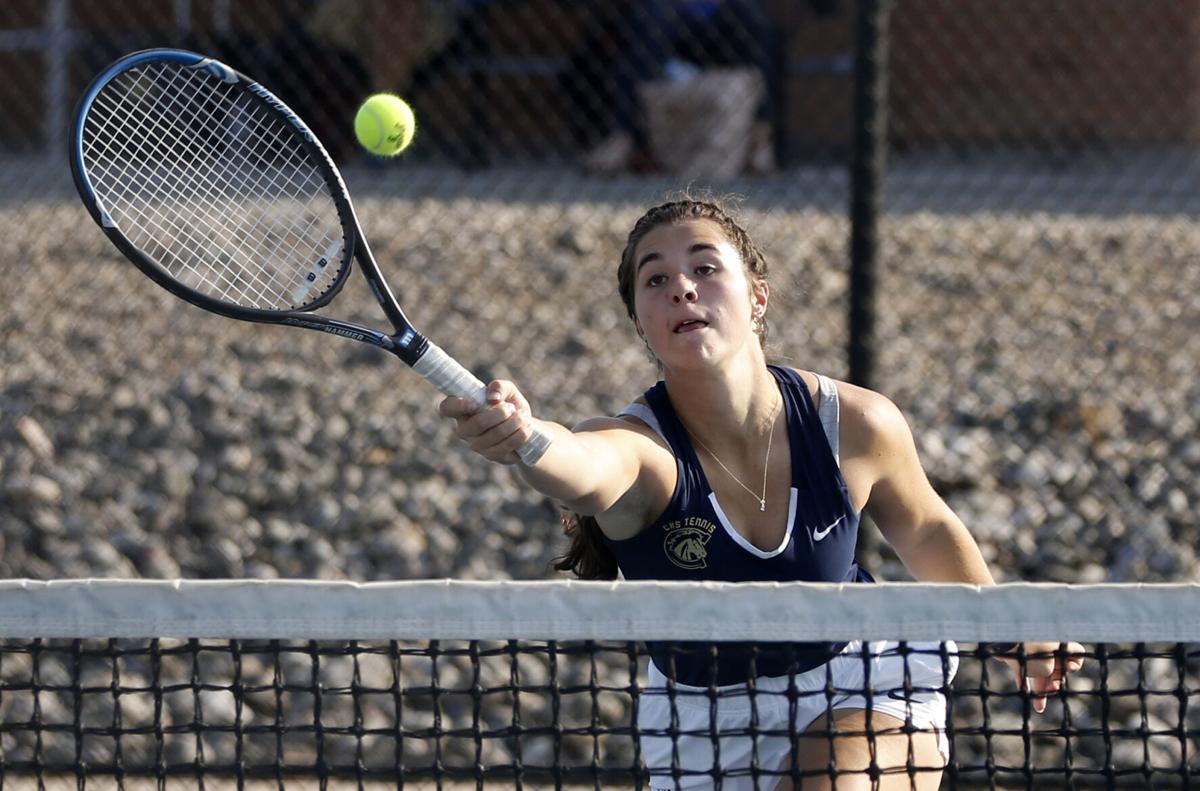 Sarah Andre reaches to return a shot at No. 3 doubles. 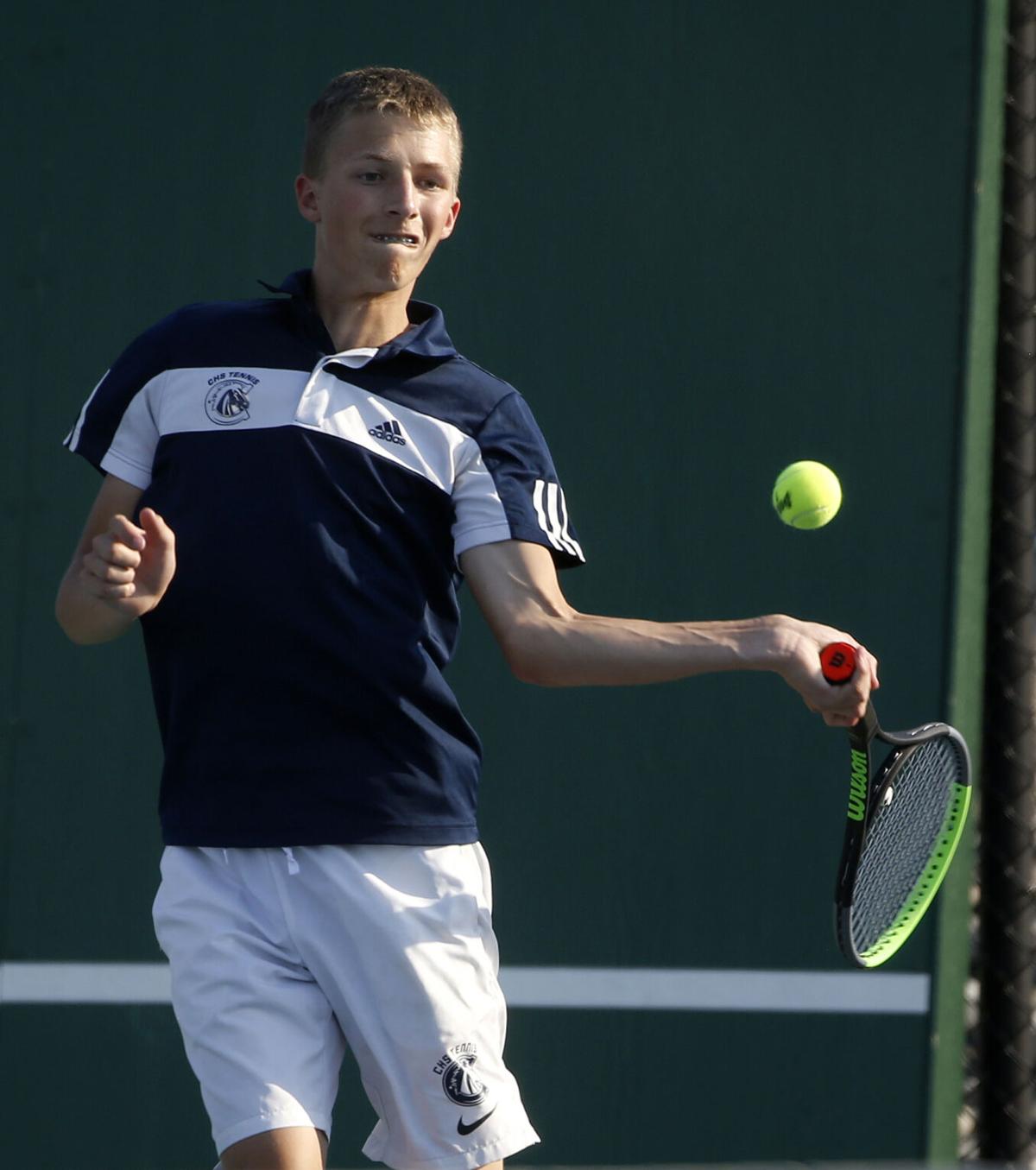 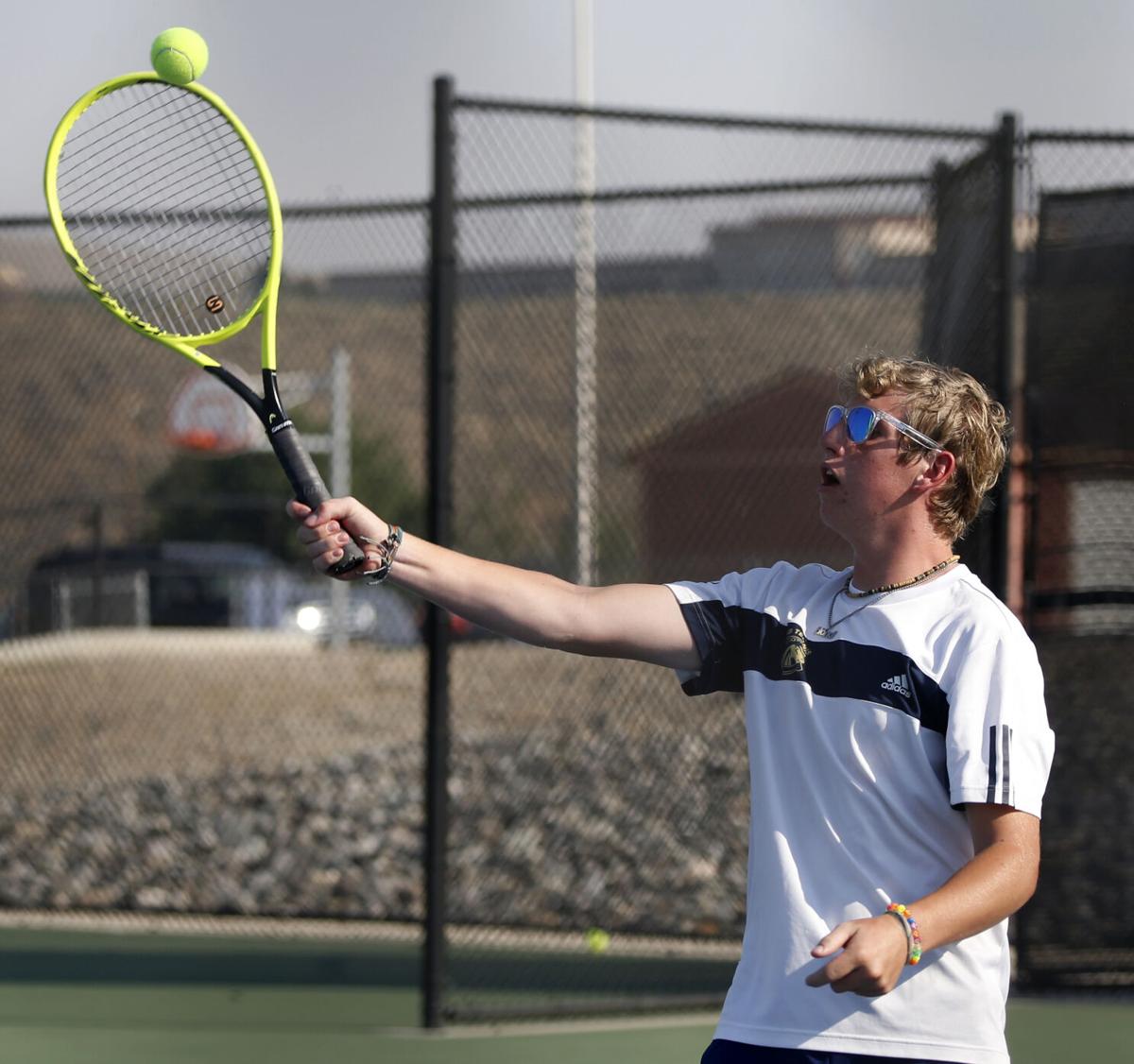 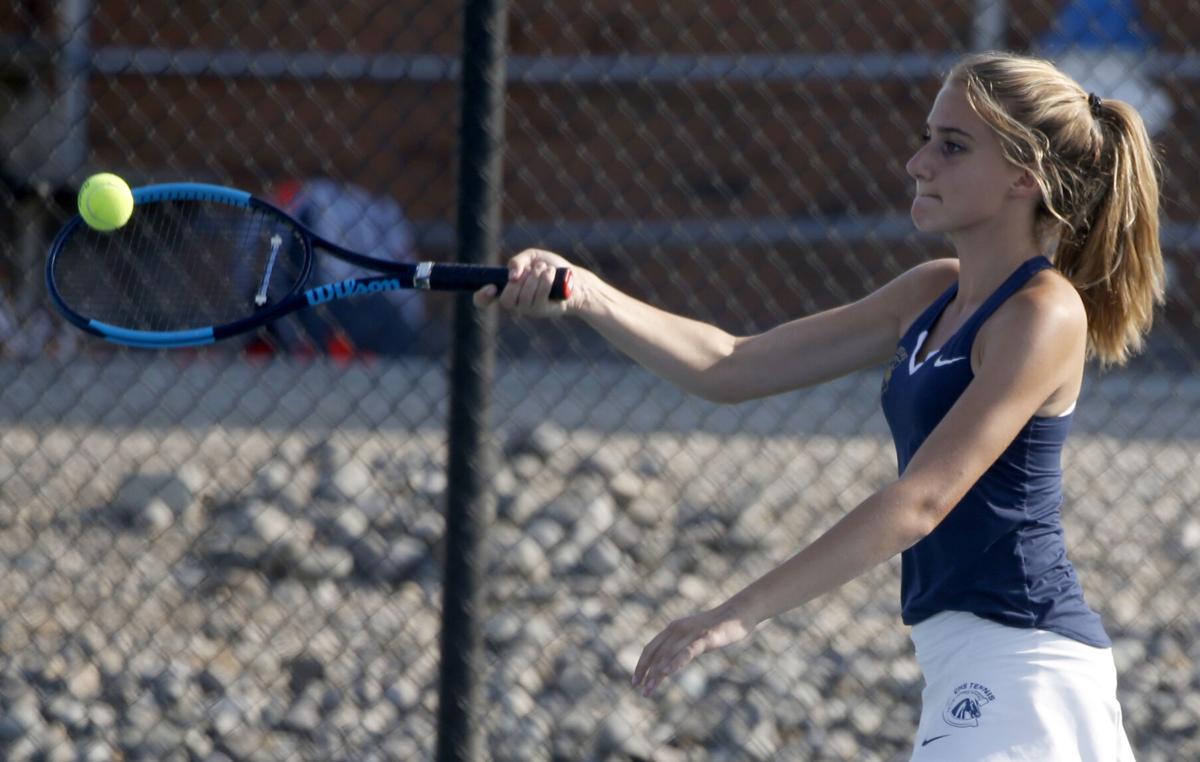 Soffy Anderson returns a serve in No. 1 doubles Thursday against Powell. The Fillies won 3-2 and the Broncs 5-0.

Neil Markert serves in No. 3 doubles Thursday against Powell.

Sarah Andre reaches to return a shot at No. 3 doubles.

The rivalry games between Cody and Powell rarely disappoint, and it was no different in the tennis rematch between the two schools Thursday night.

The Broncs followed their earlier season sweep with another, beating the Powell boys 5-0. The Fillies had some struggles but still managed to pull out a team victory 3-2, after beating Powell 4-1 when they met last week.

By the time Tristan Dollard and Mitchell Schwab finished their No. 2 doubles match Thursday night, the sun was just a pink-and-gold memory in the evening sky. Marathon matches from the Fillies pushed the day late for the Broncs, and both teams were loud in supporting their players.

Each Bronc won in straight sets, the third time that has happened this season (the others against Rock Springs and the previous Powell match), taking down the defending state champions with ease.

“We had a long conversation before the match,” Quigley said. “Cody is a very laid-back, relaxed kid. We wanted to try to keep that when he’s not playing a point and keep the intensity when he is.”

Champlin has admitted to becoming frustrated in matches in the past, but said Quigley told to him imagine he was walking along a beach between points, and that “clicked” with him.

“I was so chill the entire match,” he said. “I wasn’t even frustrated at stupid shots.”

Quigley likes what he’s seen out of the Broncs so far this year, and thinks they have chance to make some noise in Gillette for the state tournament.

“I think our boys, if we come together, I think we could win state. I really do,” Quigley said. “If we play up to our potential, we definitely have a shot. Potential is potential, it goes either way.”

The Powell girls played the Fillies tough when they last met, and Thursday’s match against the Panthers was no different. Three matches went to third sets, and a fourth had a first-set tiebreaker.

“At one time, it was looking like we could lose every match,” Quigley said. “To get that win, 3-2, the girls should be proud of that.”

After sweeping singles in their last meeting in some long matches, both Raegen Staggs and Anna Brenner fell to their opponents, Brenner in two sets, Staggs in three.

“Every time I see [Sami Cole], I feel like we’ve both gained a lot,” Brenner said. “It’s all in her consistency. She’s one of the most consistent players I’ve played. Normally, those are the hardest people to beat.”

Staggs battled through a calf cramp suffered in the second set, but ultimately fell to opponent Ashley Dunkerly in three sets, 2-6, 6-4, 4-6.

“She stayed out there, she fought,” Quigley said. “She didn’t default, so I feel proud of her for that.”

The No. 2 doubles pairing of Hudson Selk and Sage Crofts also showed resilience.

After being handed their first loss of the season in Powell, Selk and Crofts battled through a long match to take down Whitney Hult and Chase Anderson in three sets, 4-6, 6-2, 6-4.

Selk and Crofts showed off their mastery of the topspin lob, placing many shots deep in the court over the head of the Panther waiting to pounce at the net. Both Selk and Crofts stayed back near the baseline for most the match, and when Hult and Anderson tried to do the same, they couldn’t quite match the Fillies’ expertise.

“They started playing Hudson and Sage’s game,” Quigley said. “It’s tough when you play a team and they keep lobbing over your head and just doesn’t miss, you feel like you need to go back.”

With two matches to go in the regular season, both the Fillies and the Broncs are in a good place in the state standings.

The Broncs at 6-2 sit firmly in third place behind Jackson – whose only loss of the season thus far came against Cody – and Kelly Walsh, a team that remains undefeated.

With the Fillies victory giving them a season record of 7-1, they are firmly in the driver’s seat for their next match against Kelly Walsh, one of three teams, along with Sheridan, that are tied for the top record in the state.

Cody will have more than a week off from matches before their final regular-season tilts against Natrona County and Kelly Walsh on Sept. 12.