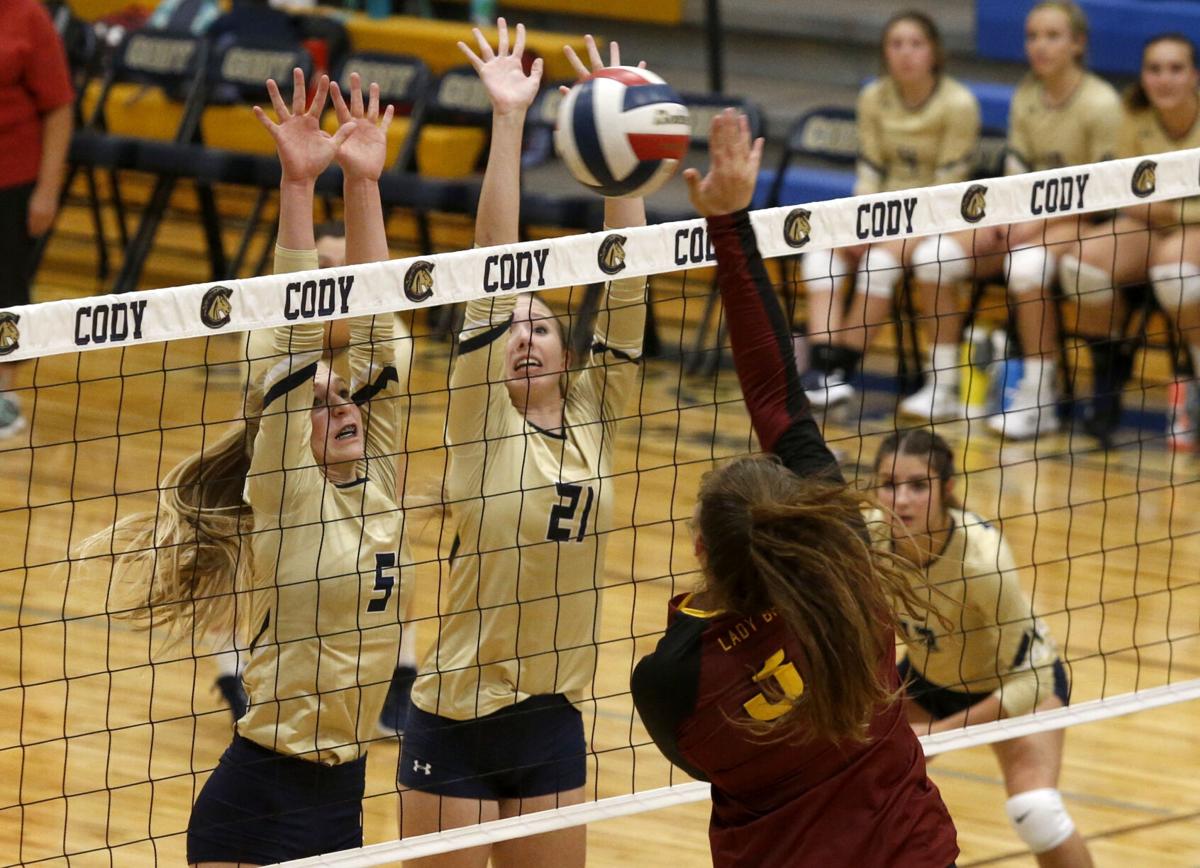 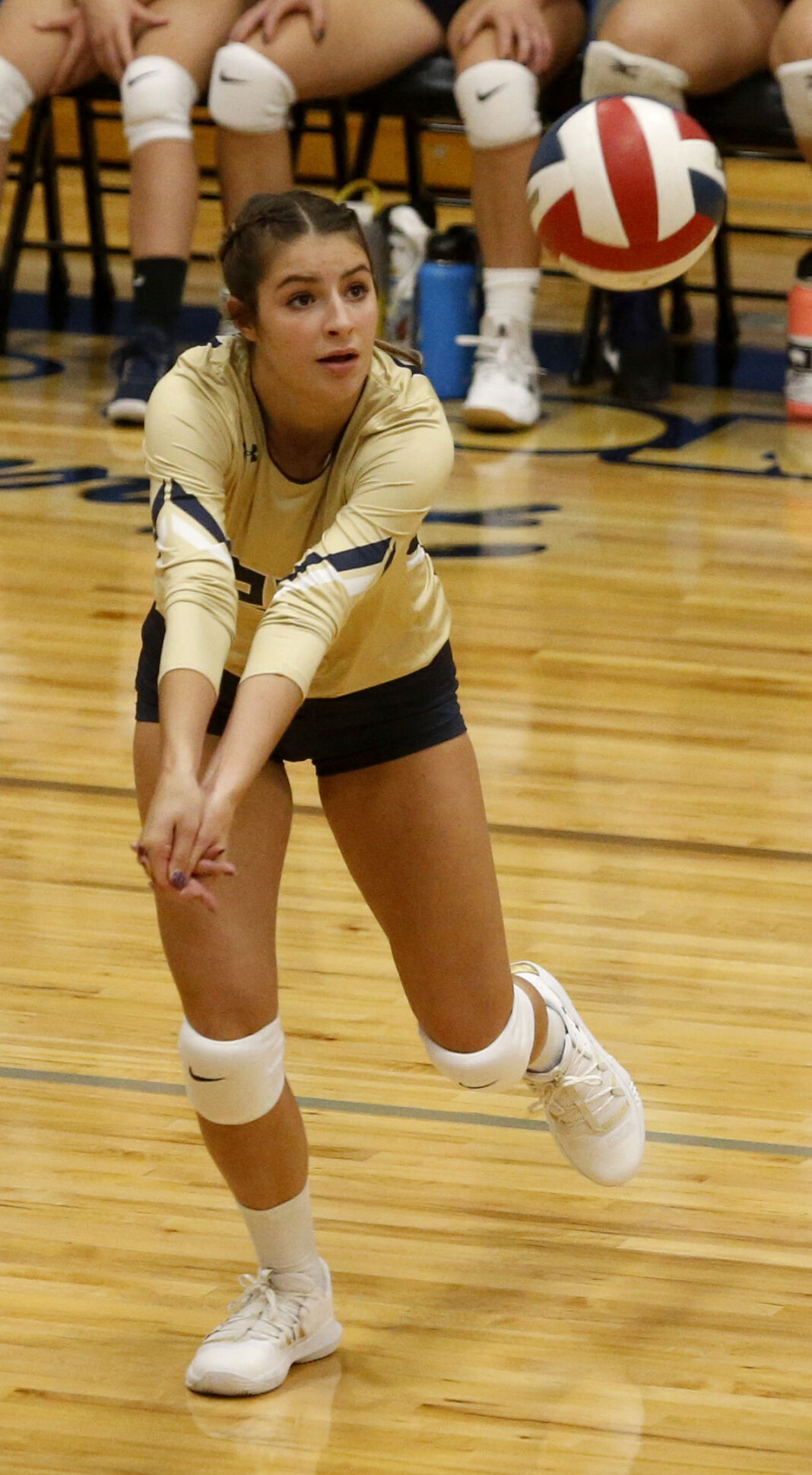 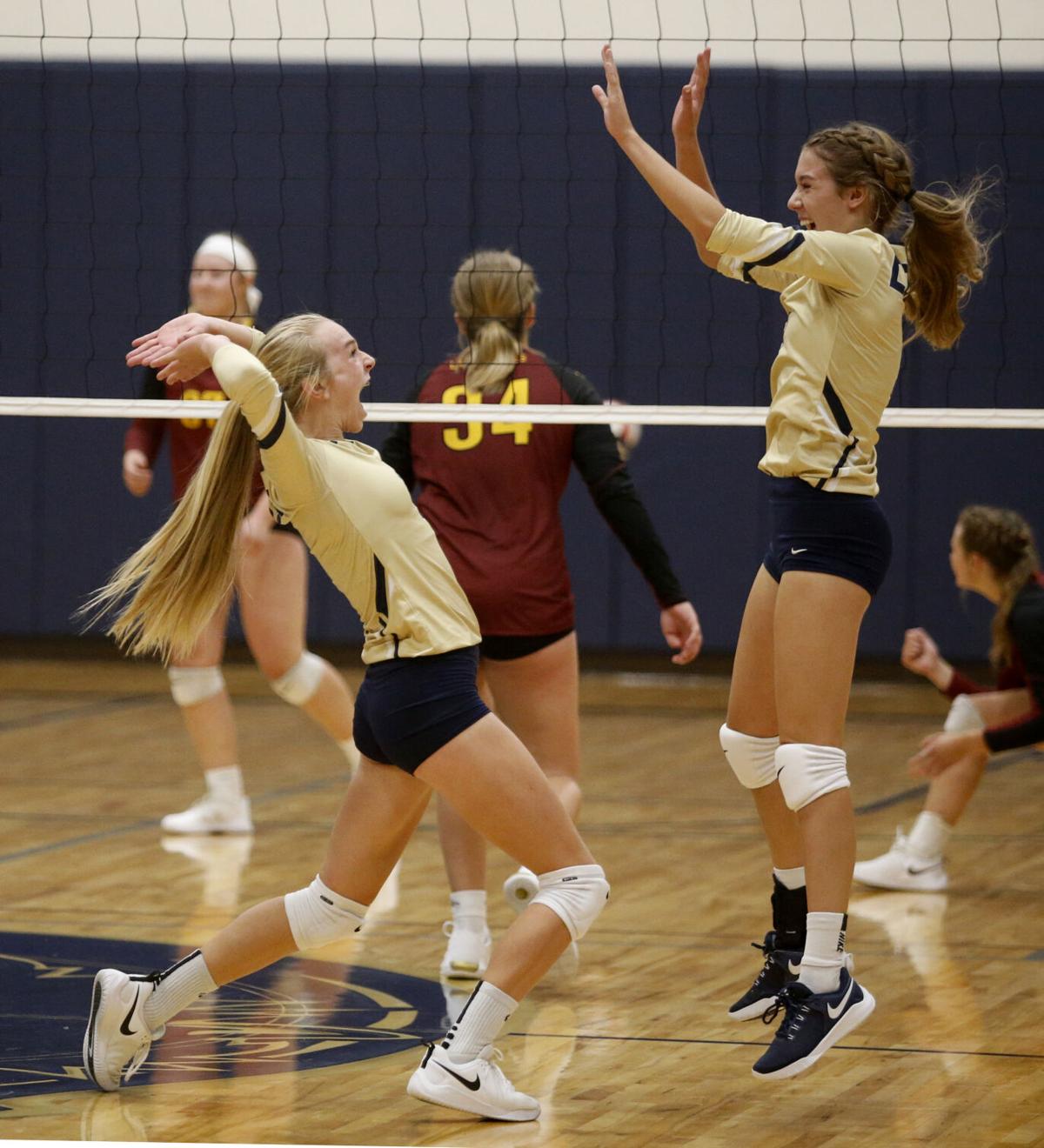 Molly Hays and Kennedi Niemann celebrate after a Niemann kill. 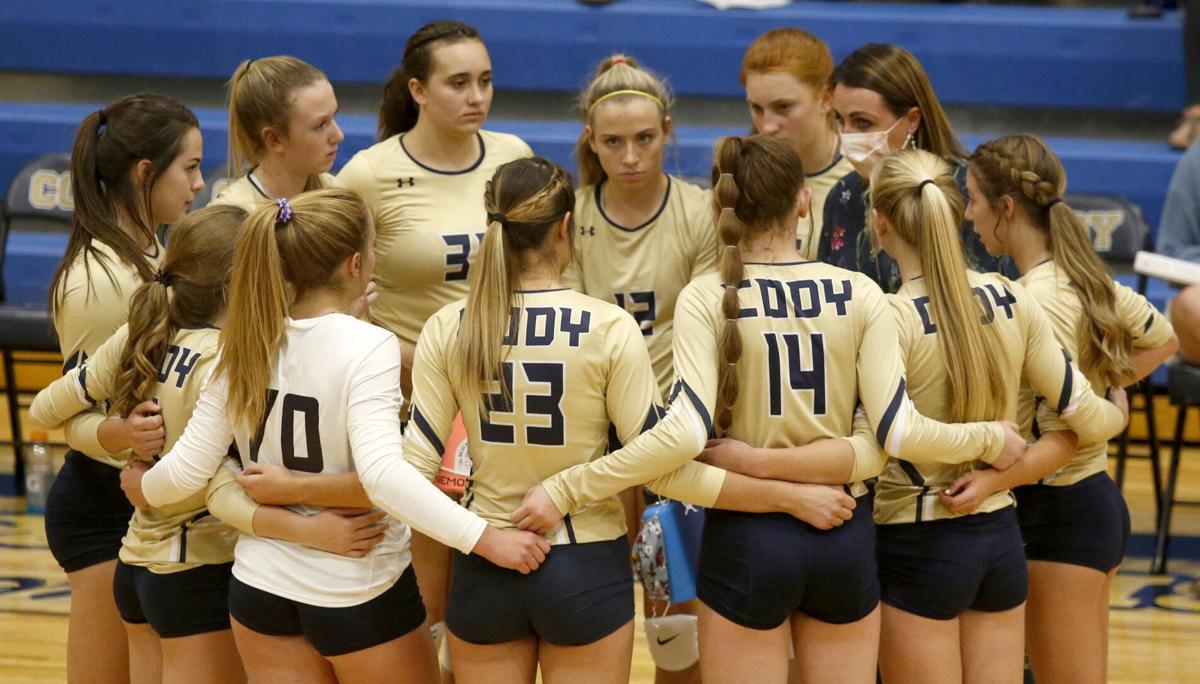 The Fillies talk during a timeout. 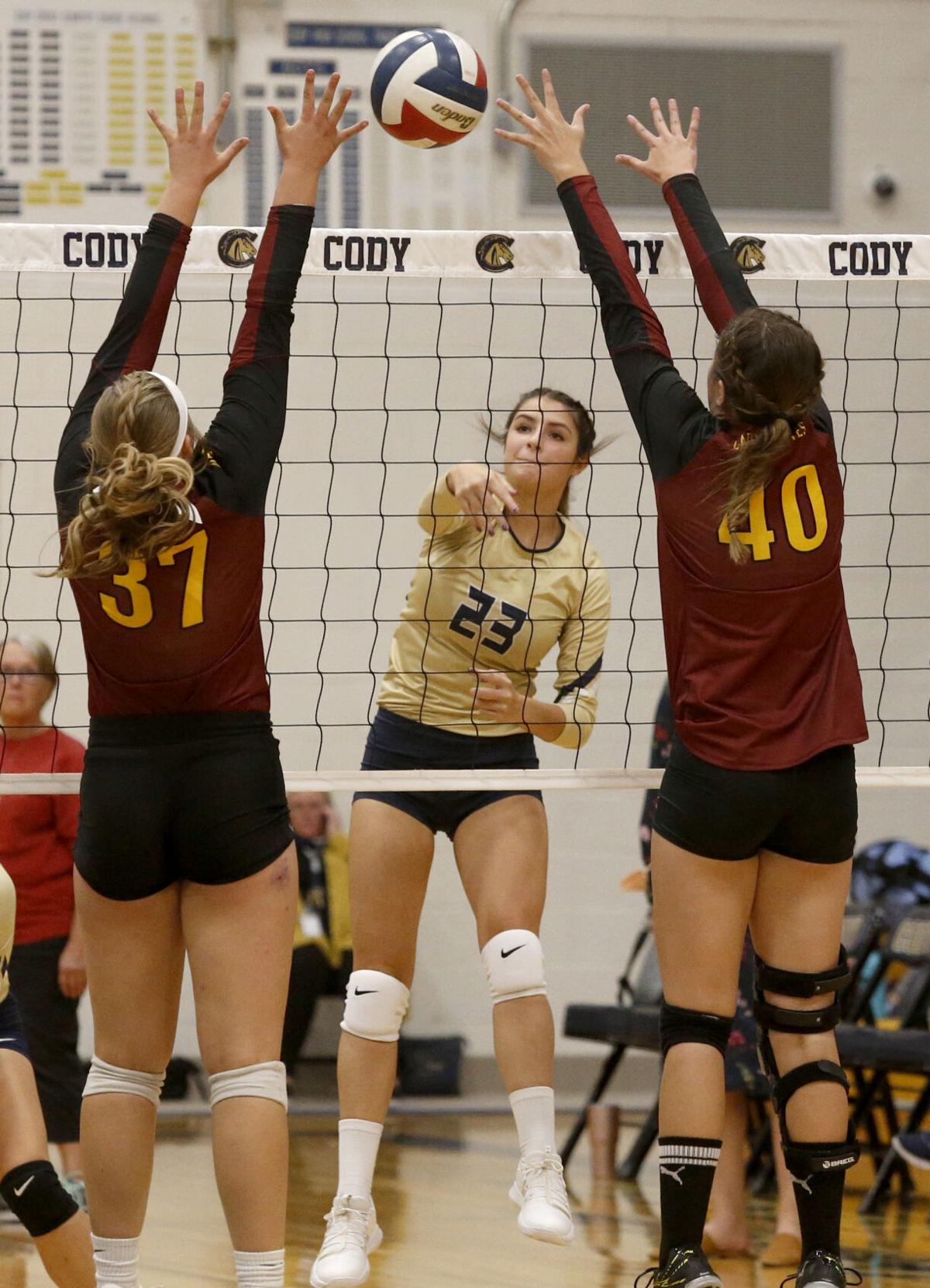 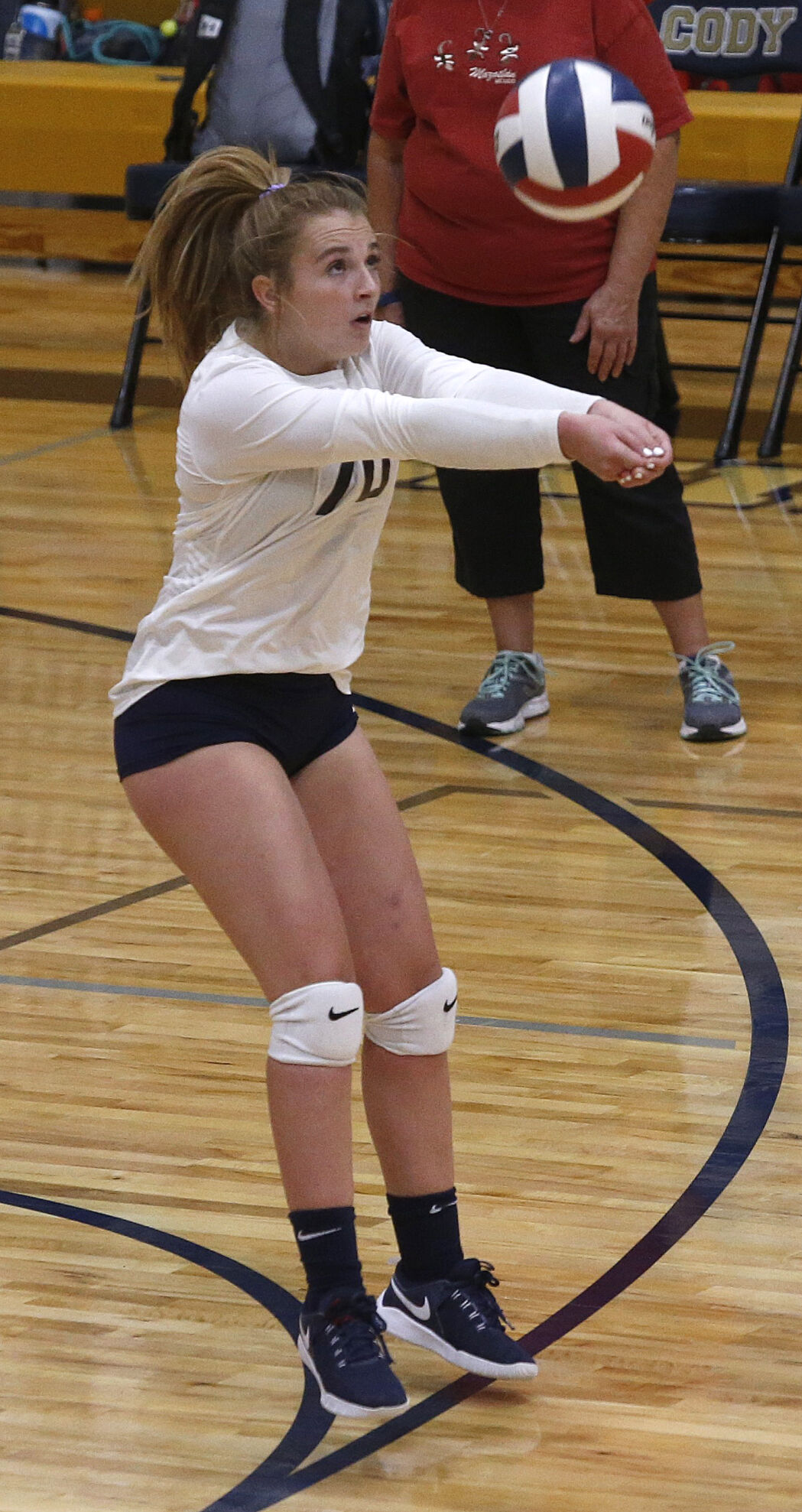 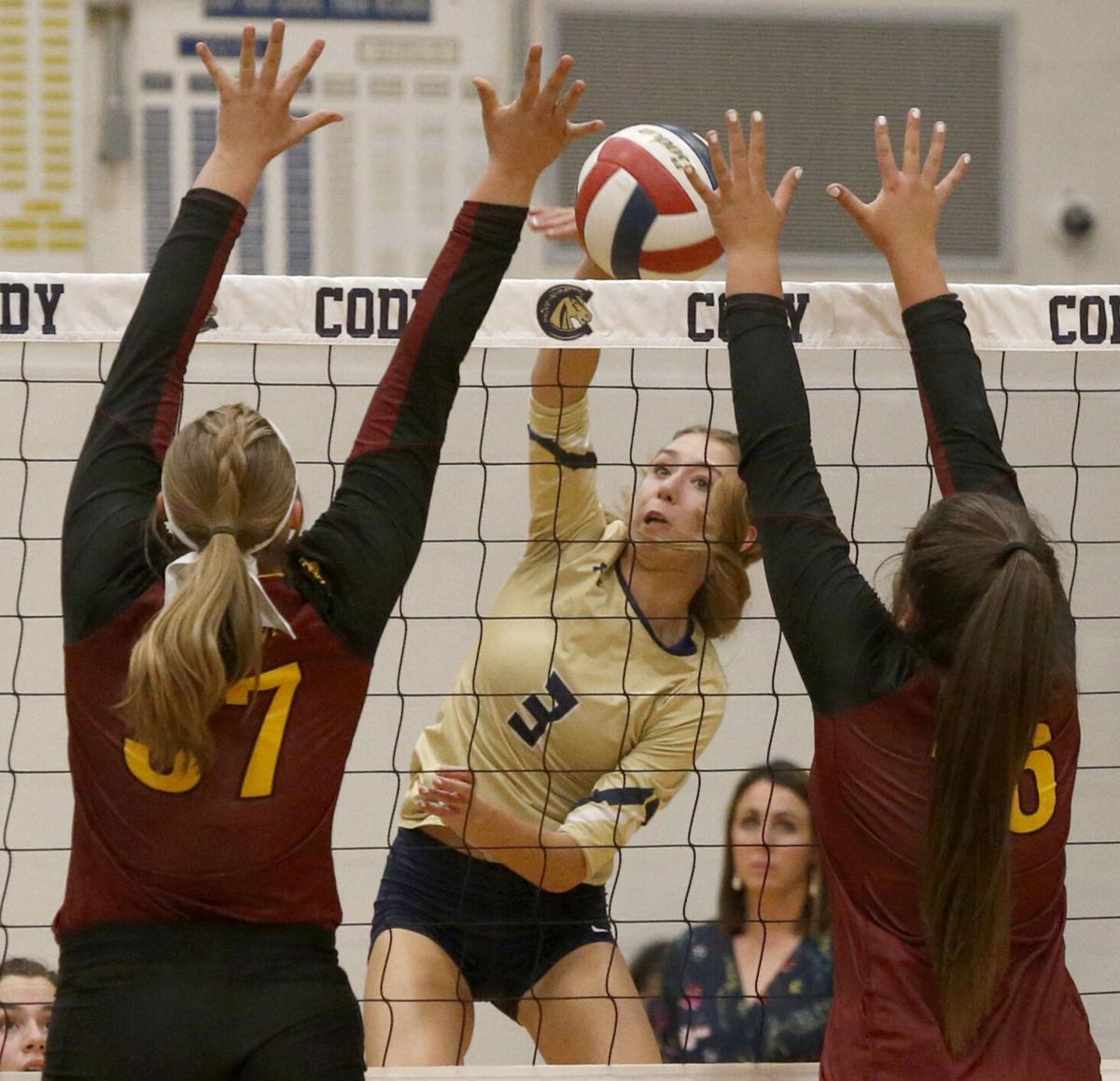 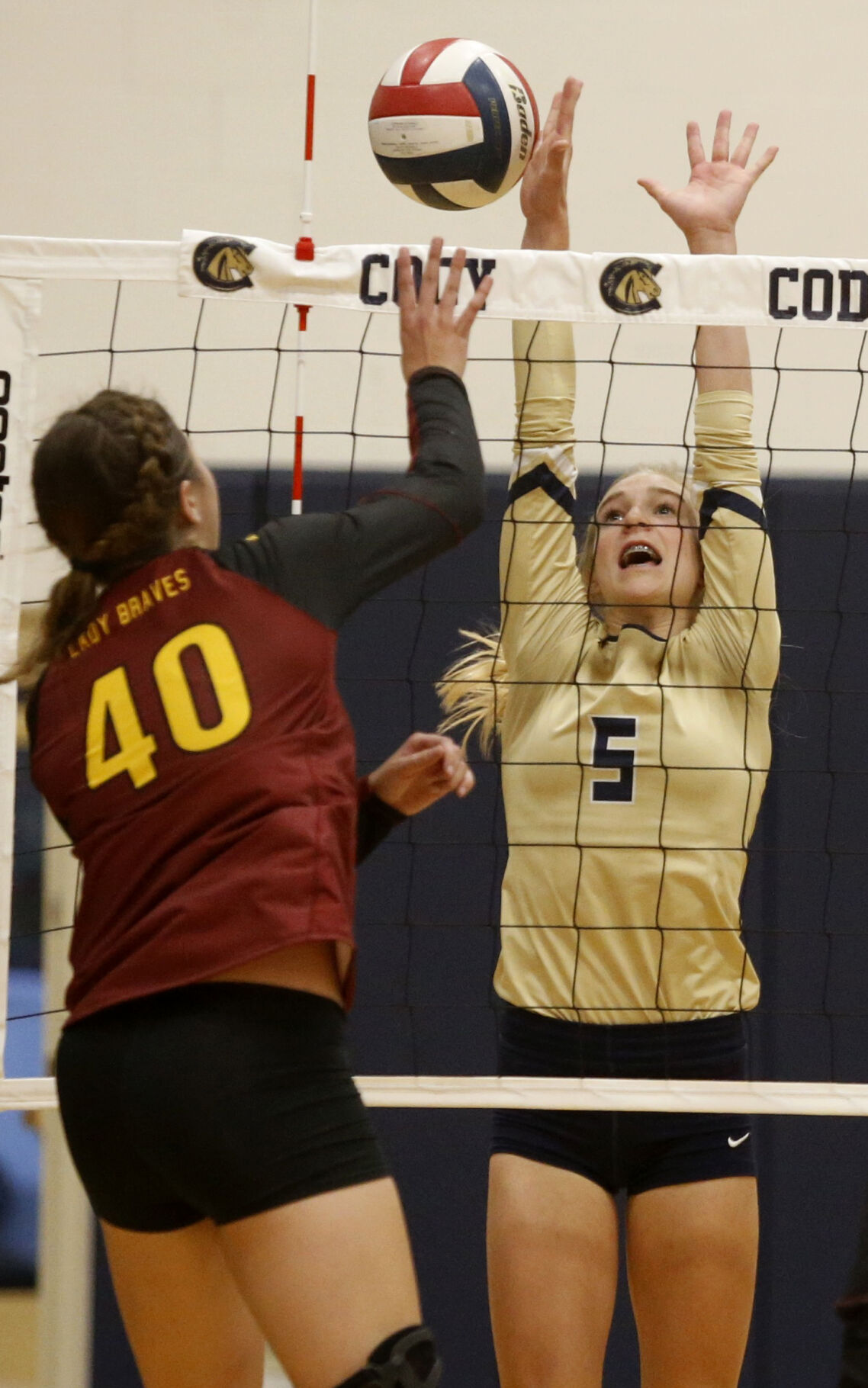 Molly Hays goes for a block. 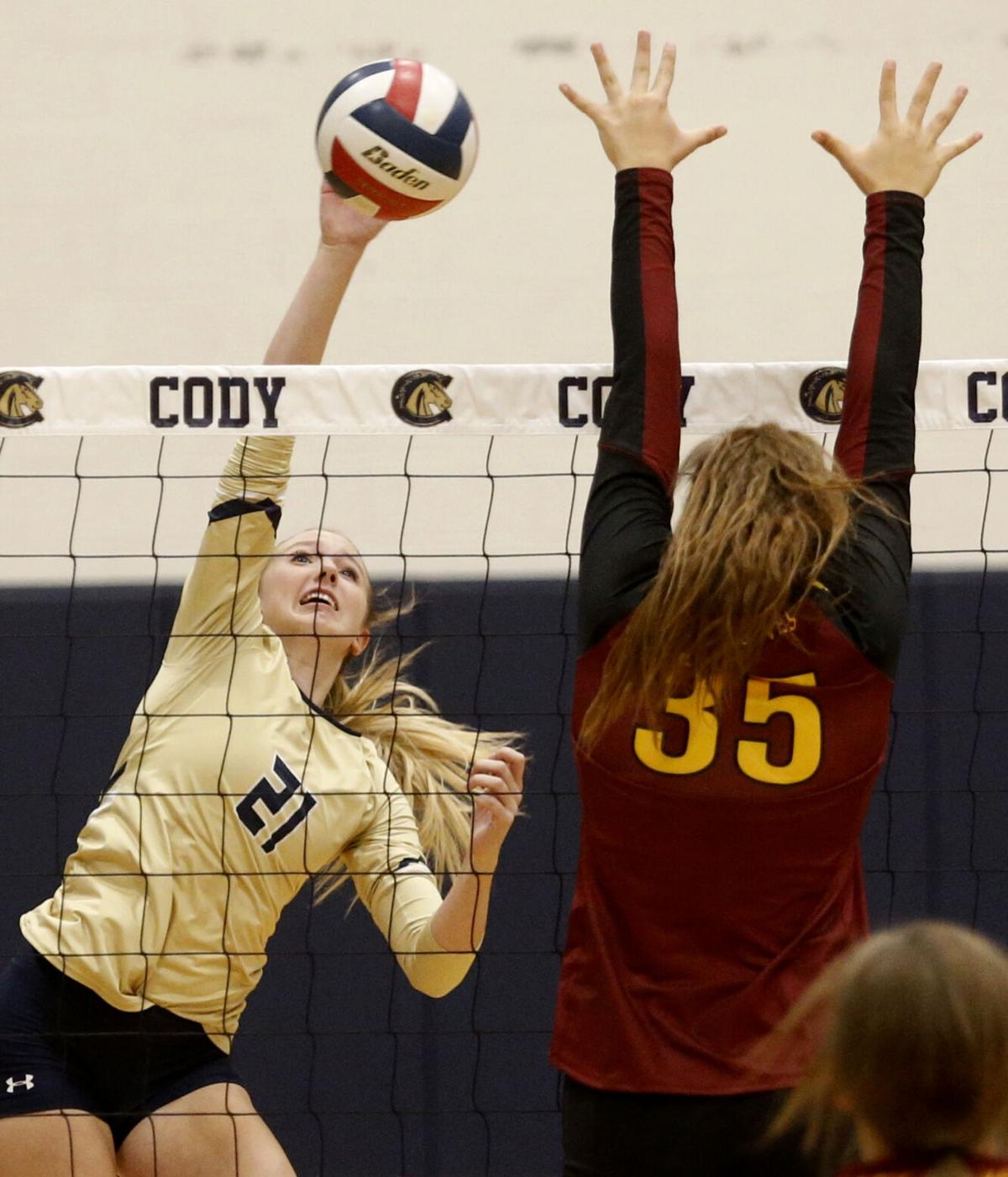 Reece Niemann tries for a kill. 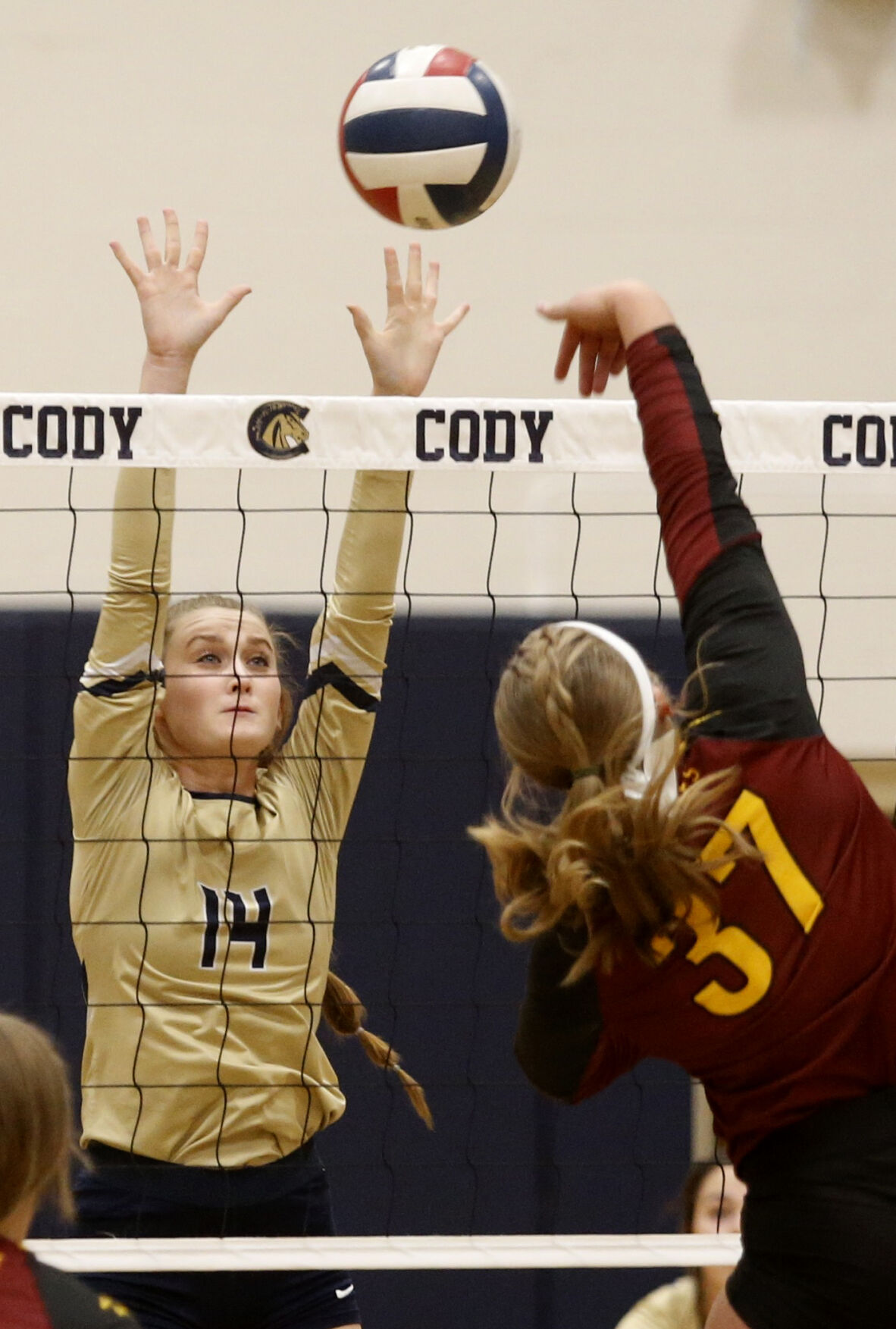 Lake Harrison goes up to block. 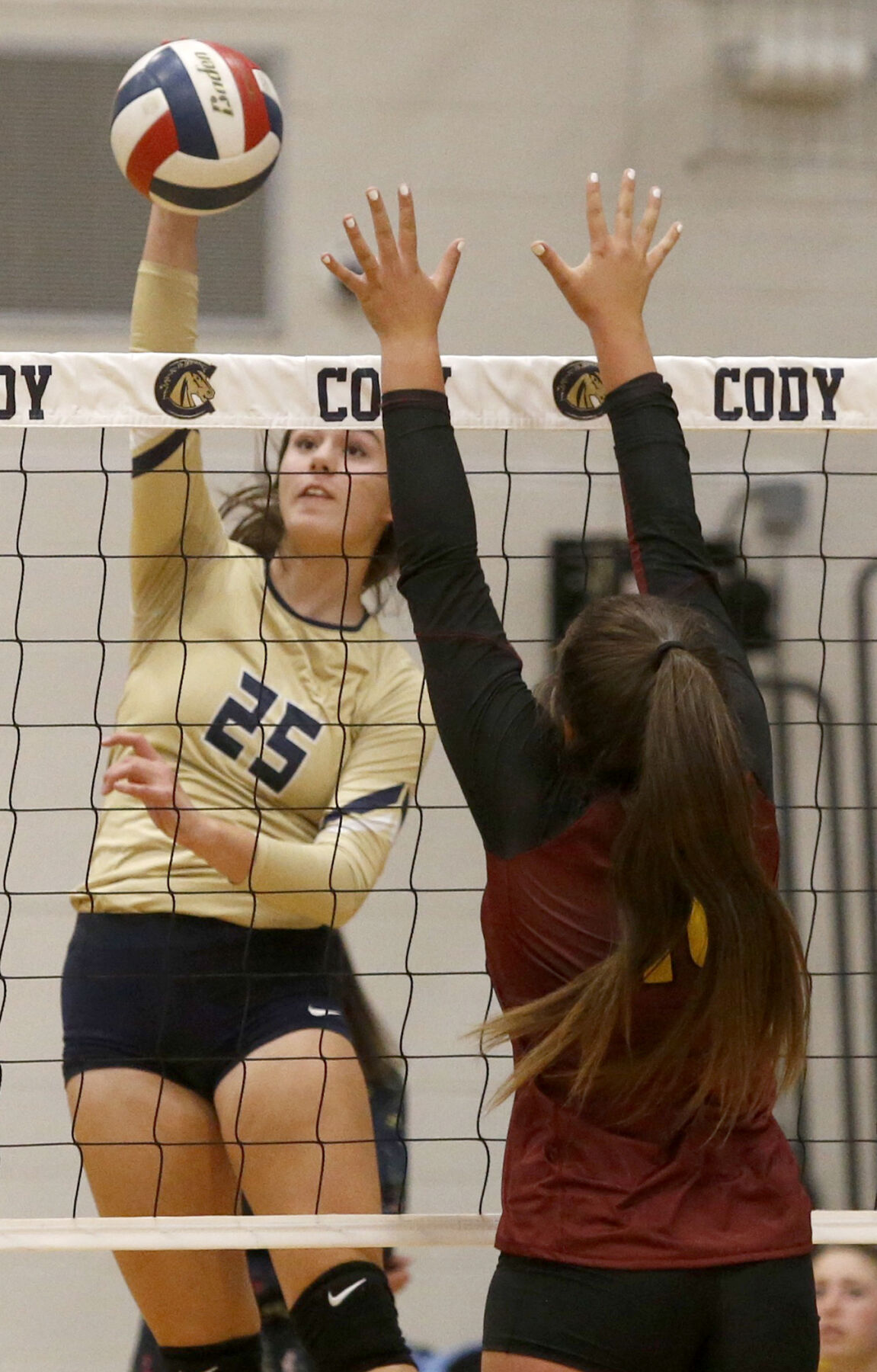 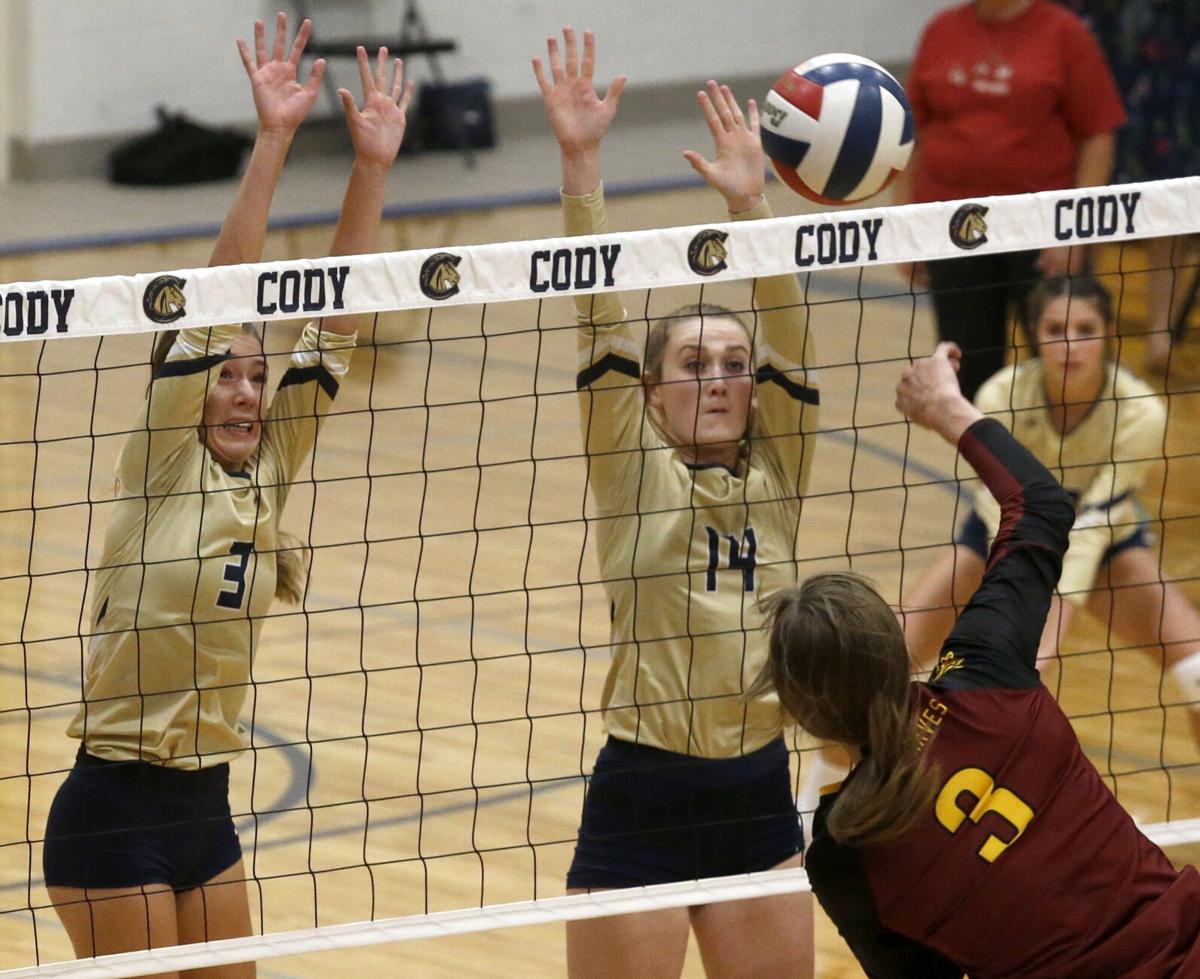 Molly Hays and Kennedi Niemann celebrate after a Niemann kill.

The Fillies talk during a timeout.

Molly Hays goes for a block.

Reece Niemann tries for a kill.

Lake Harrison goes up to block.

Playing some of its toughest defense of the season Friday, Cody nearly upset No. 5 Star Valley, losing 3-2 in a close match at Sweitzer Gymnasium.

“We played super good,” Wilson said. “Defense is what kept us in the game. It’s always really satisfying to see a ball go up off your hand.”

After winning the first and fourth sets to tie the match at 2-all, Cody came out strong in the final set. Tied at 2, a carry, two out hits by Star Valley and an ace by Reece made it 6-2. Three kills by Wilson and another by Hays continued to keep Cody ahead 9-6. Star Valley came back to tie the game at 10 and 11, but a kill by Kennedi and ace by Reece made it 13-11. Cody needed just two more points, but two blocks by the Lady Braves and a hitting error gave the Lady Braves a 14-13 lead. Cody tied the game at 14, but Star Valley scored the final two points for a 16-14 win to clinch the match.

“We had a couple balls that didn’t go our way,” Birch said. “That’s just the way it works sometimes.”

In the first set, the Fillies fell behind 7-1. Cody took advantage of some Lady Braves miscues for its next four points before Reece had the team’s first kill to make it 10-6 Star Valley.

The Fillies trailed by as many as six but gradually got back in the game with a kill by Wilson, tying it at 14. After three more ties Cody scored five straight points. The run included two aces by Kennedi and a block by Reece. A net serve and carry by Star Valley set up game point for the Fillies, who won 25-19 on a kill by Reece.

Cody fell behind early in game two, trailing by as much as six points. Down 19-13, a kill and then three straight aces by Wilson made it 19-17 Star Valley. The Fillies wouldn’t get any closer and lost 25-20.

The Fillies took a 4-1 lead in the third set and kept a small advantage early on before Star Valley tied it at 9. The teams would tie five more times, before Star Valley took advantage of three Filly errors to lead 21-18. Trailing a short time later 24-20, a missed serve, carry by the Lady Braves and Bower aces made it 24-23 before a Star Valley kill ended the game at 25-23.

Cody started strong in game four, taking a 3-1 lead after an ace by Reece. The Fillies held a slight advantage until an 8-3 run which included three kills by Bower, made it 22-15. Star Valley started the close the gap but a block by Reece set up game point at 24-19 and a kill by Wilson gave Cody a 25-21 win.

“I think it came down to experience,” Wilson said. “Star Valley just has more experience than we do.”