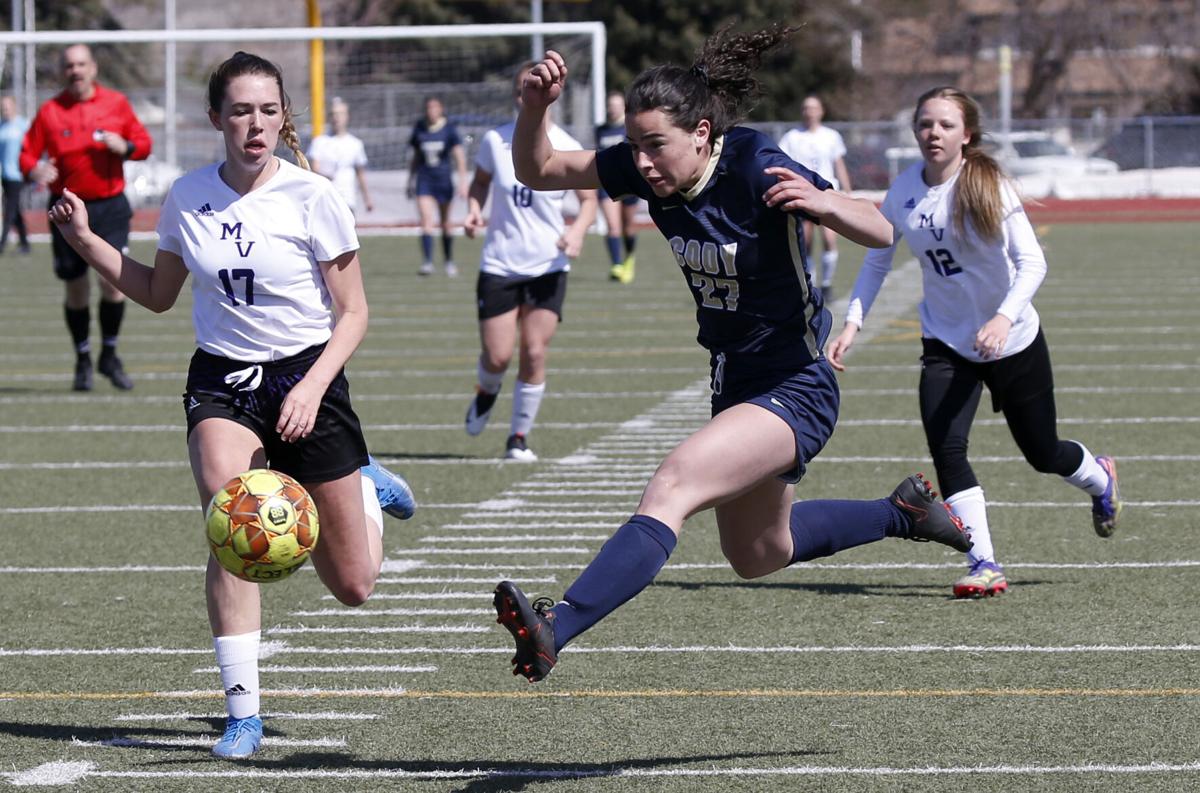 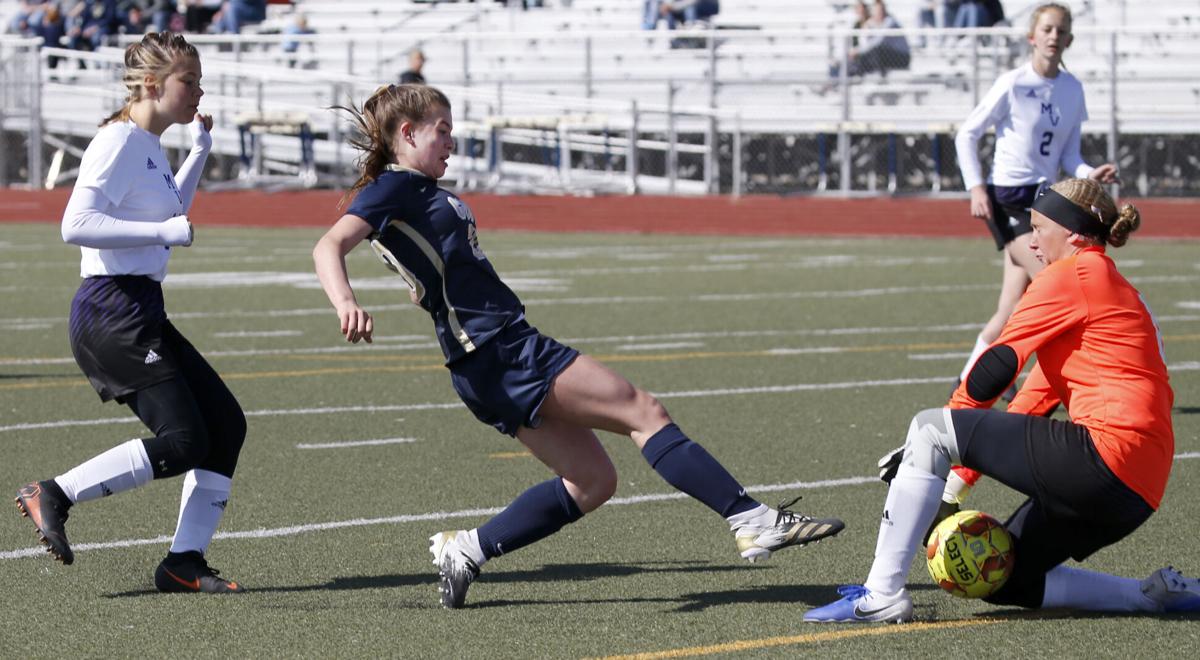 Jessa Lynn has a shot stopped by the keeper. 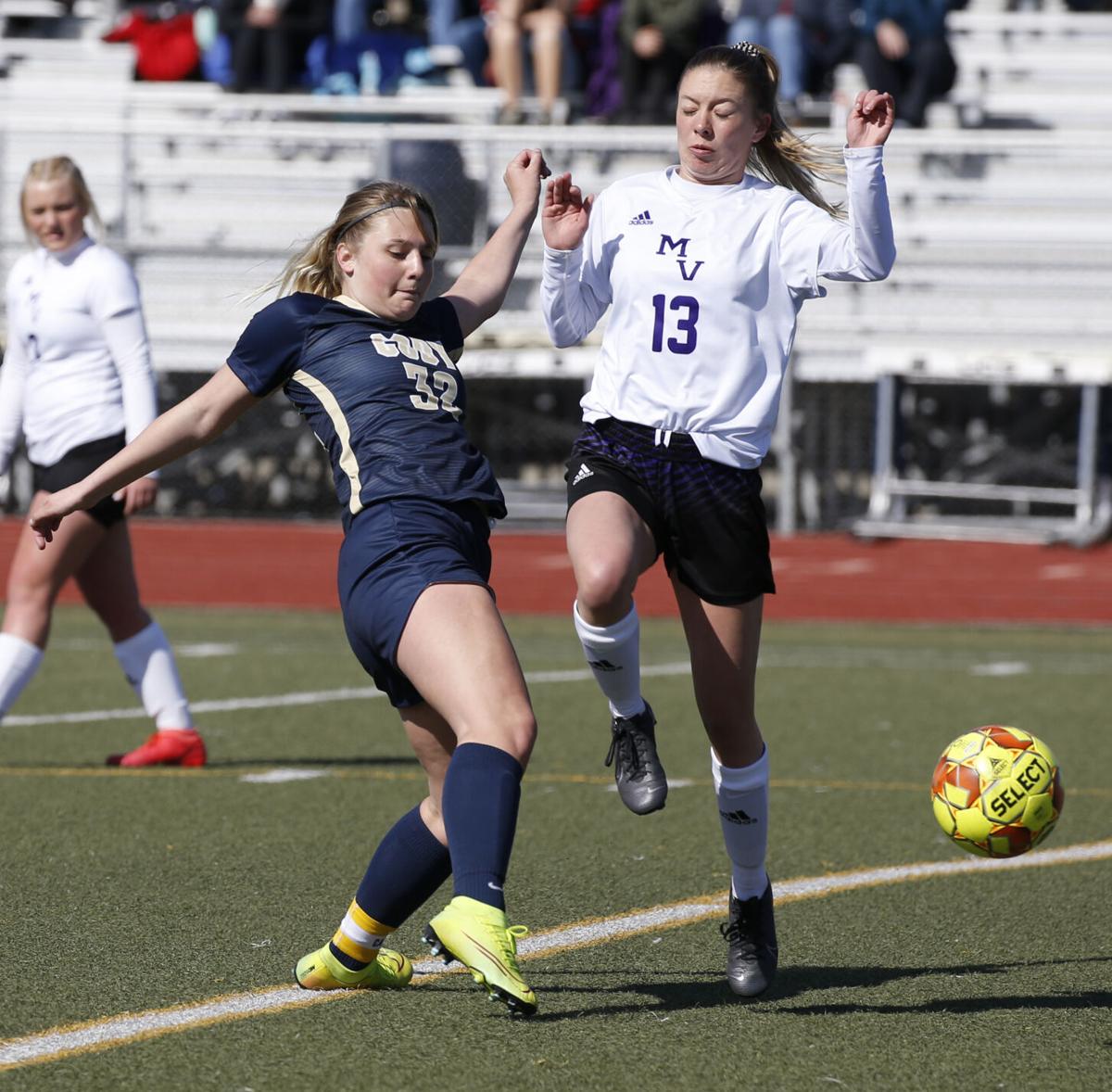 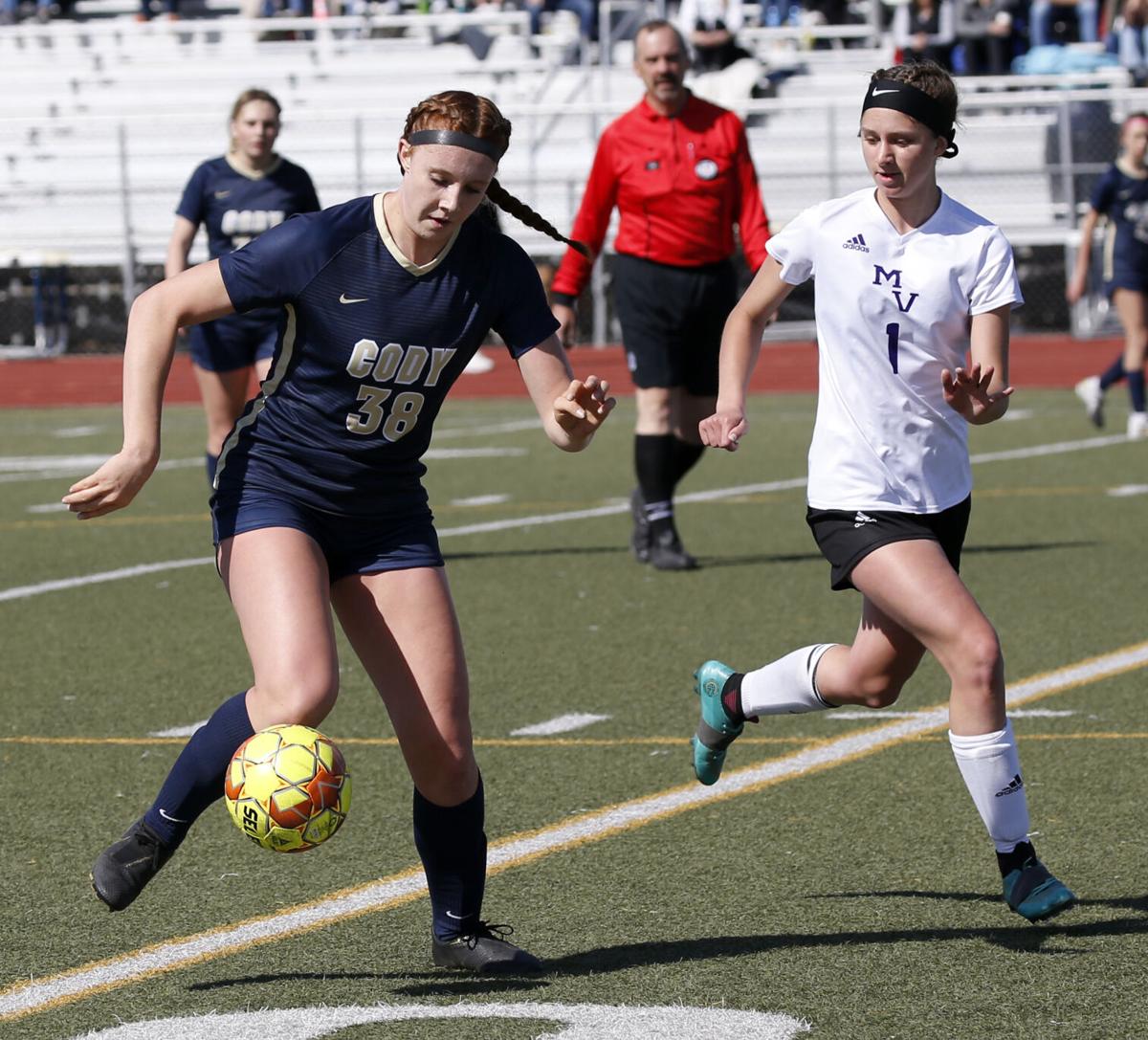 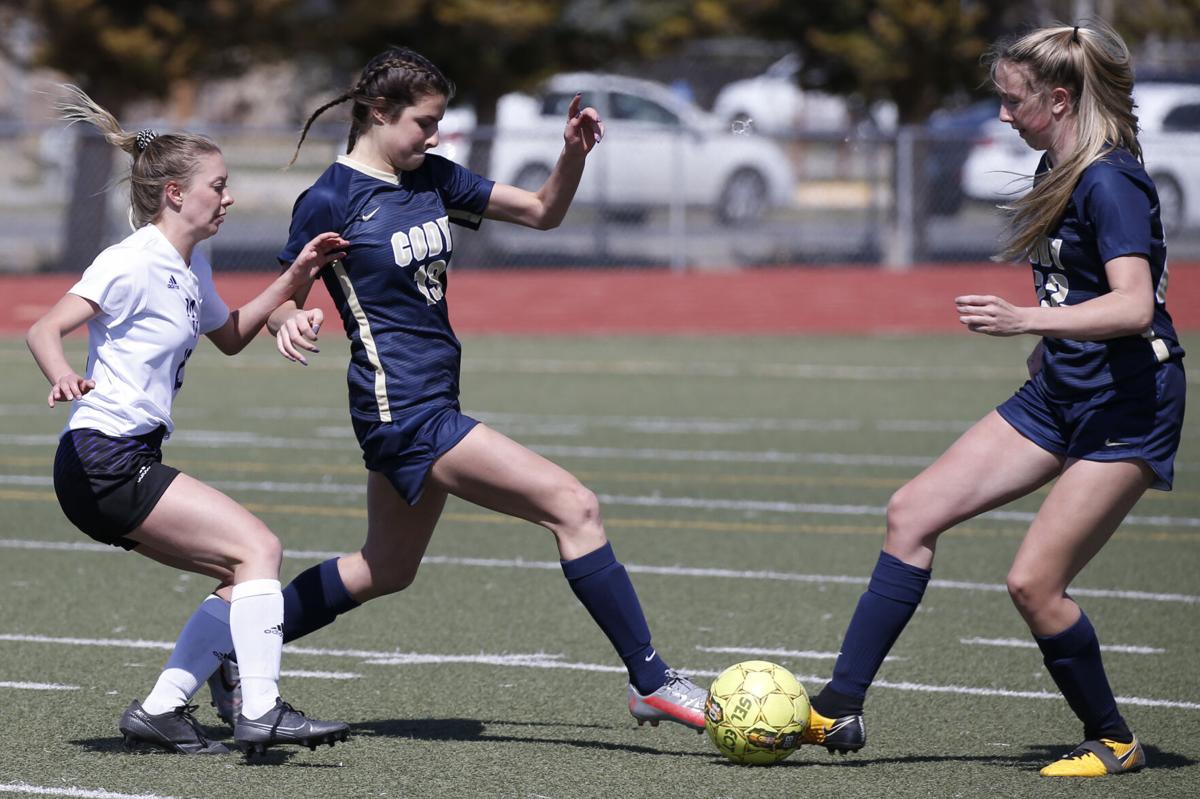 Brittan Bower and Reece Niemann move to clear the ball. 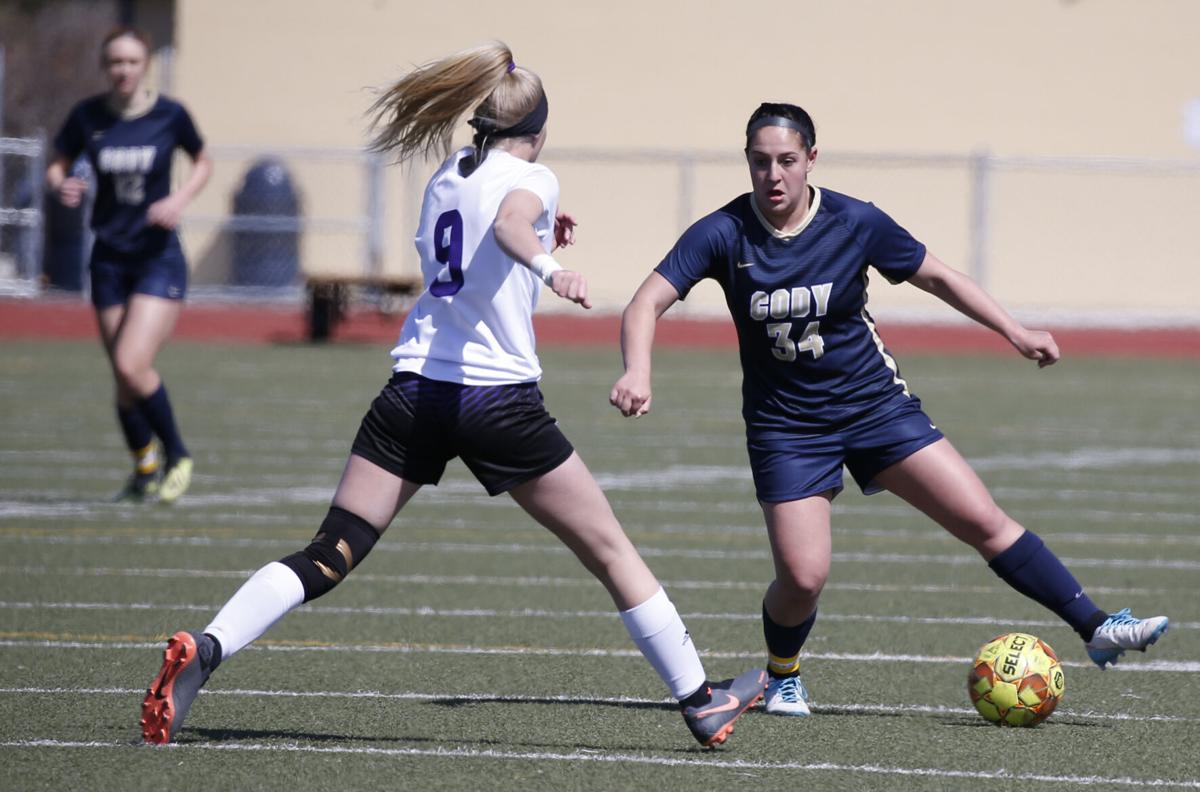 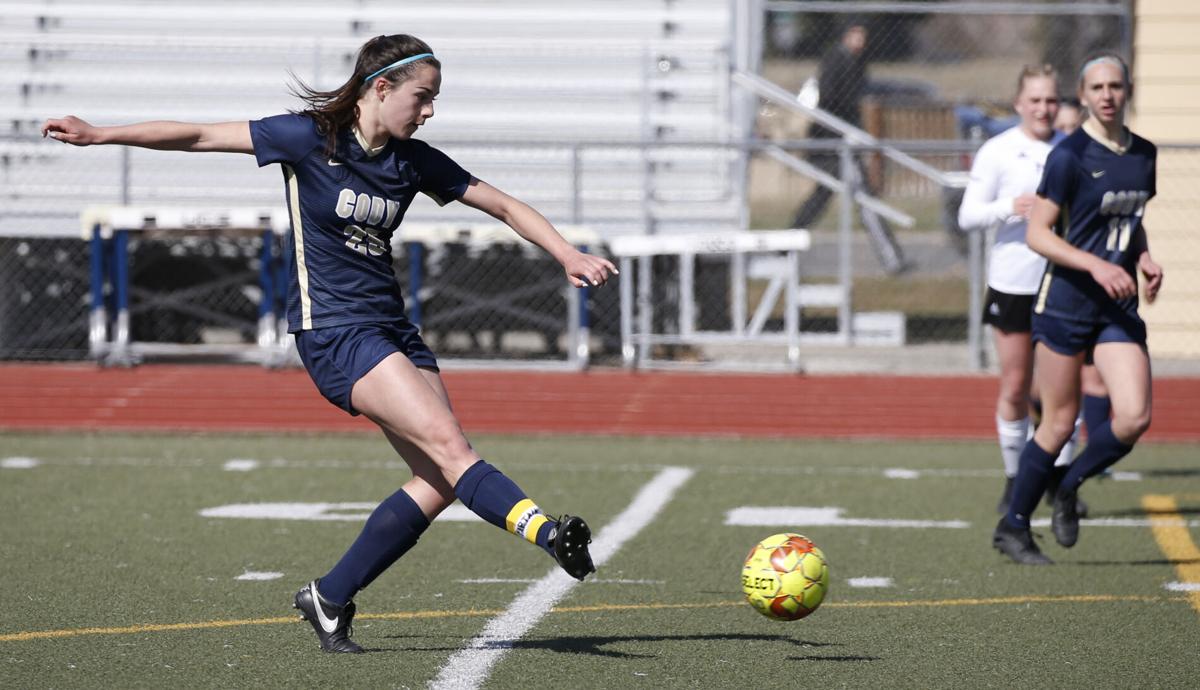 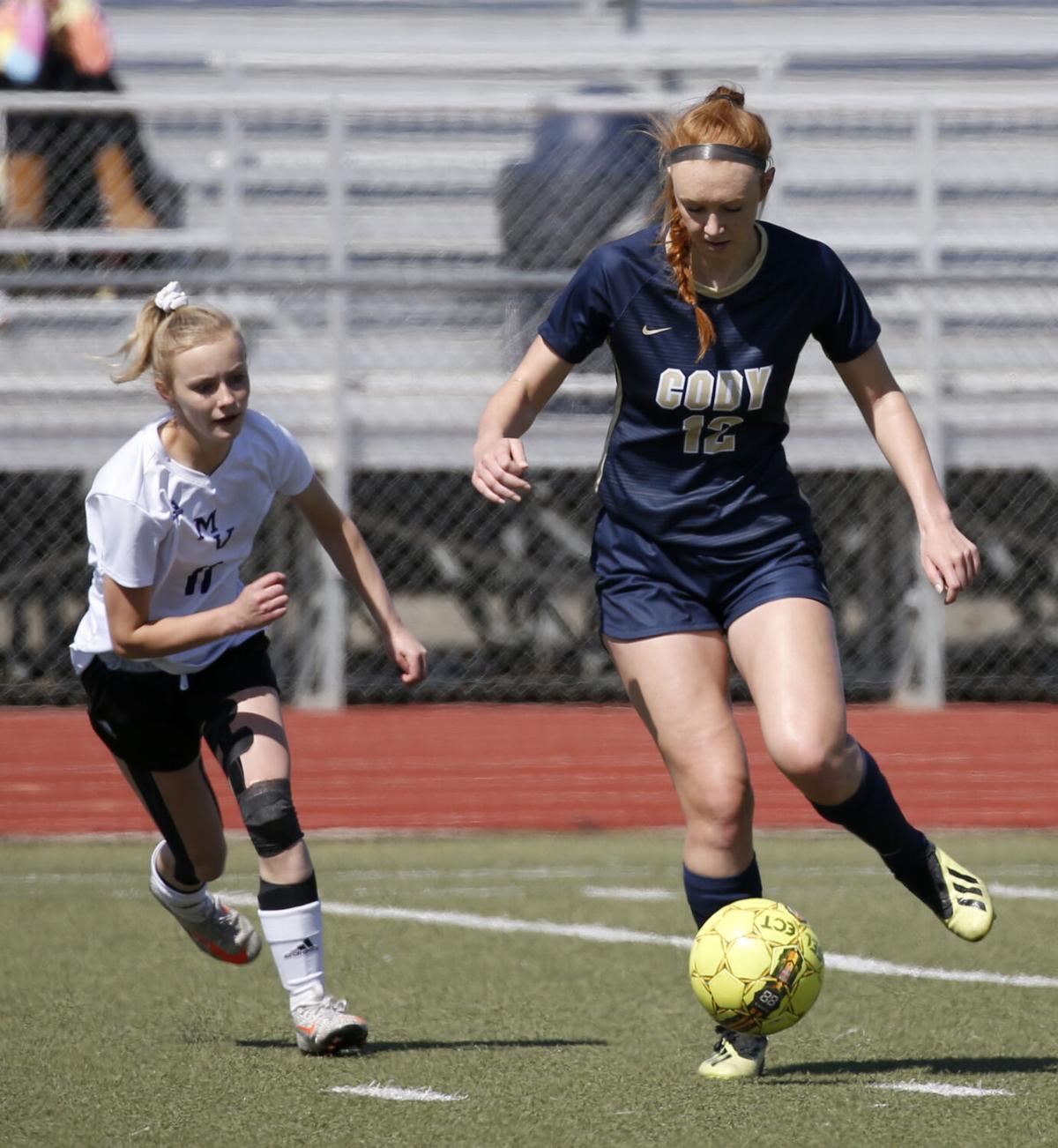 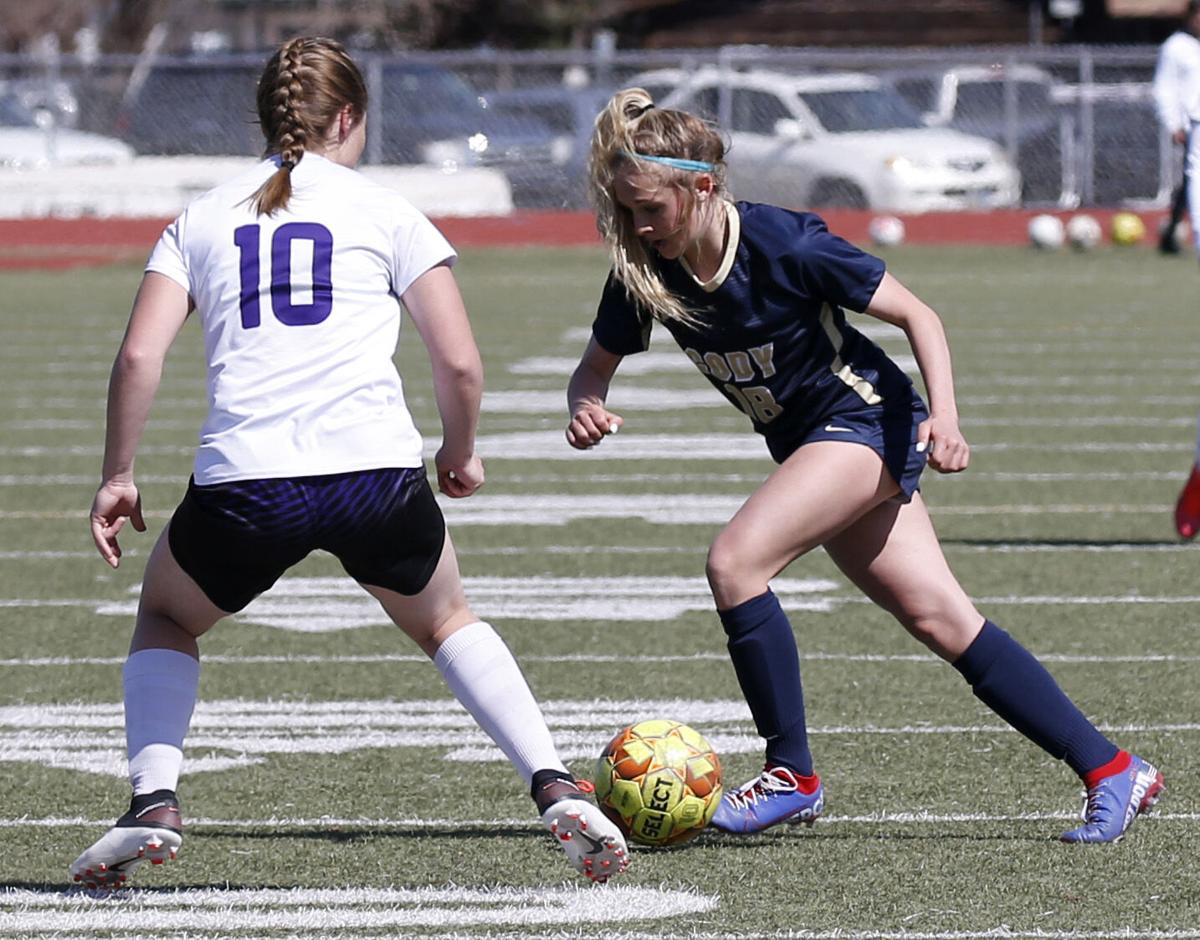 Aspen Kalkowski moves up the field. 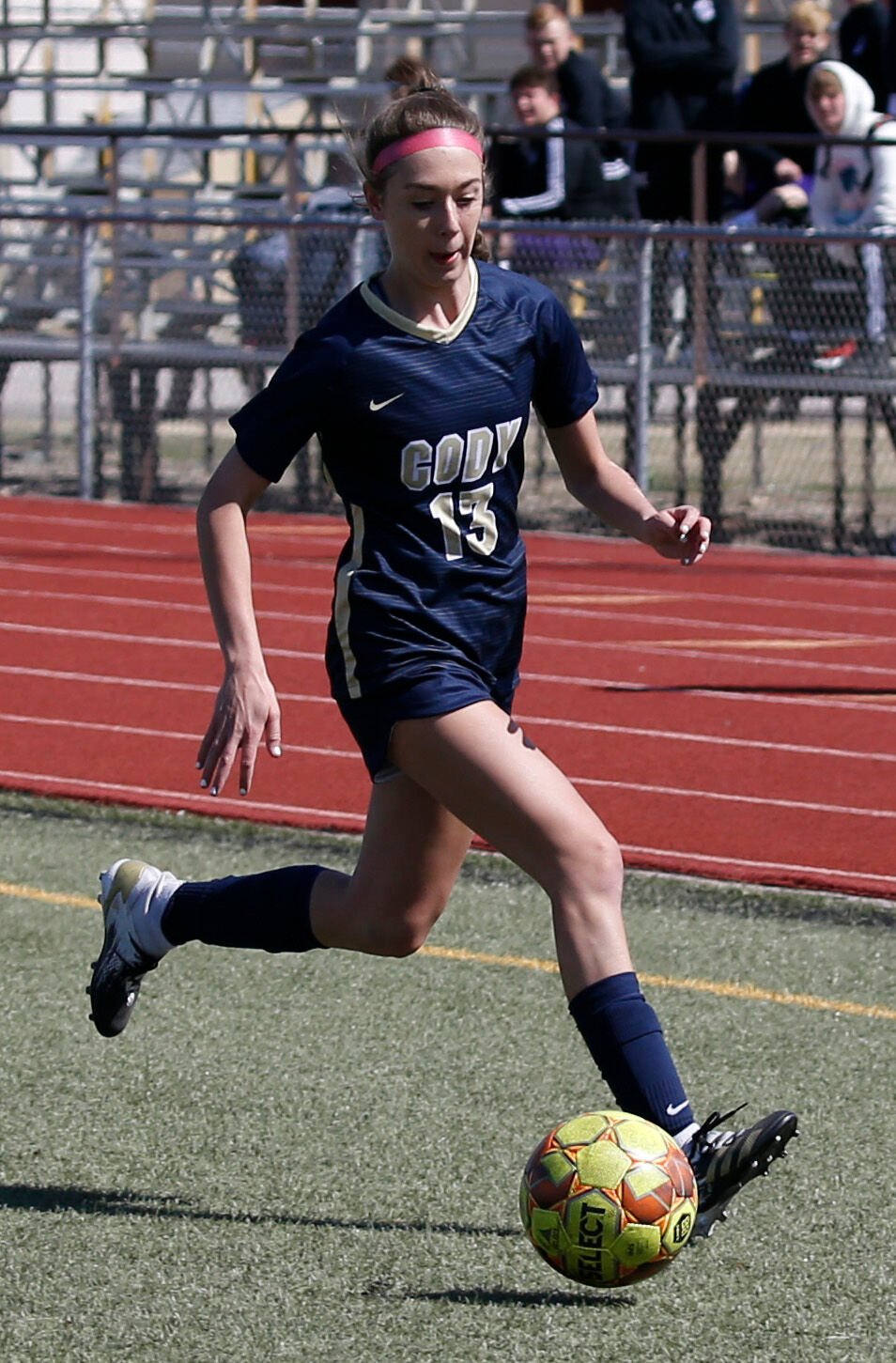 Kennedi Niemann chases down a ball.

Jessa Lynn has a shot stopped by the keeper.

Brittan Bower and Reece Niemann move to clear the ball.

Aspen Kalkowski moves up the field.

Kennedi Niemann chases down a ball.

The Cody girls soccer team hasn’t quite figured out how to put together a full 80 minutes of solid play, but it did enough to get another victory Saturday against Mountain View.

The Fillies defeated the Lady Buffs 4-1, with all their goals coming in the second half.

“We haven’t played a game yet where we’re consistent for both halves,” coach Marian Miears said. “We had better composure in the second half and our defense was better as a unit.”

No. 2-ranked Cody (5-1) took control from the start, and two minutes in Autumn Wilson nearly scored with a header on a corner kick, but the ball went to the goalie.

The Fillies continued to fire shots at the goal, but they were either blocked by the keeper or went wide of the net. Frustration grew as the half continued.

“We get so worked up when we don’t score in the first 10 minutes,” Miears said. “We were the better team going in, but we have to stay calm and play like that.”

Mountain View didn’t have many chances at its goal, but it made one of its few count late in the half. With the ball near the front of the net, the Fillies were unable to fully clear it and a high floater from the right side went over goalie Isabelle Radakovich’s head into the left corner of the net in the 33rd minute. It’s the first time the Fillies haven’t scored first this season.

“Soccer is a long game so we knew we’d have plenty of time to score,” senior Torrie Schutzman said. “But once they got that goal it kicked us back in gear.”

Cody picked up the intensity and had five shots in the final five minutes, including one by Wilson that looked as if it would go in but stuck on the outside corner post. The Fillies went into the half trailing 1-0.

“At halftime we talked about bringing our energy up and to know our shots would come,” Ally Boysen said. “We came out and fed off each other. We kept our heads up and had more hustle.”

It didn’t take long for Cody to get going in the second half. Just two minutes in, Emma Nieters brought the ball up the right side and crossed it to a wide open Schutzman in front of the goal to tie the game.

“There’s always relief after you get that first one,” Schutzman said. “After that more usually start to fall shortly after.”

Six minutes later the Fillies took the lead. Mountain View was called for a handball in the box and Schutzman took the penalty kick. The goalie got a hand on it but then lost sight of the ball and Schutzman crashed the net to finish the play and give Cody a 2-1 lead.

“I always have to make it complicated,” Schutzman said of her penalty kicks so far this season. “Right after it hit I could tell by her feet she didn’t know where the ball was so I just crashed it.”

Now with the lead, the Fillies began playing with more confidence and composure and continued to create scoring opportunities.

“We worked on stepping to the ball hard and being first to every 50-50 ball,” Boysen said.

Molly Hays passed ahead to Jessa Lynn in the 56th minute. Lynn moved around one defender for the easy shot at goal.

The Fillies’ final goal came in the 62nd minute, when Lynn’s through-ball found Wilson who hit the back of the net.

Schutzman credits the team’s success in the game to strong leadership and focus.

“It starts from the top down,” she said. “We have a great coach who gets us pumped up. We want to win and know how to find that extra gear when we need to.”

Cody has a busy week ahead. First the team travels to Worland on Tuesday. Friday the Fillies will be back home to take on Pinedale at 3 p.m. and Saturday they host Lander at noon.