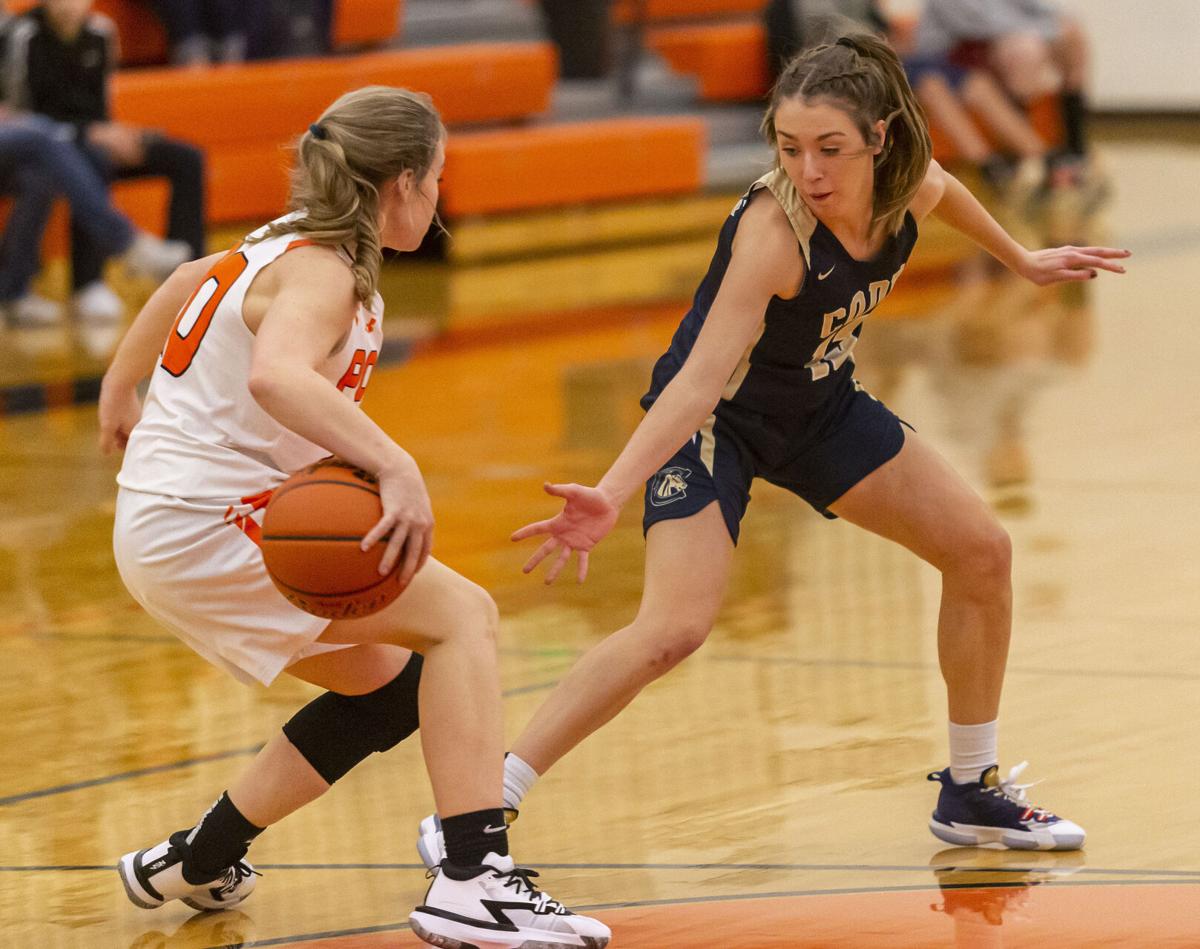 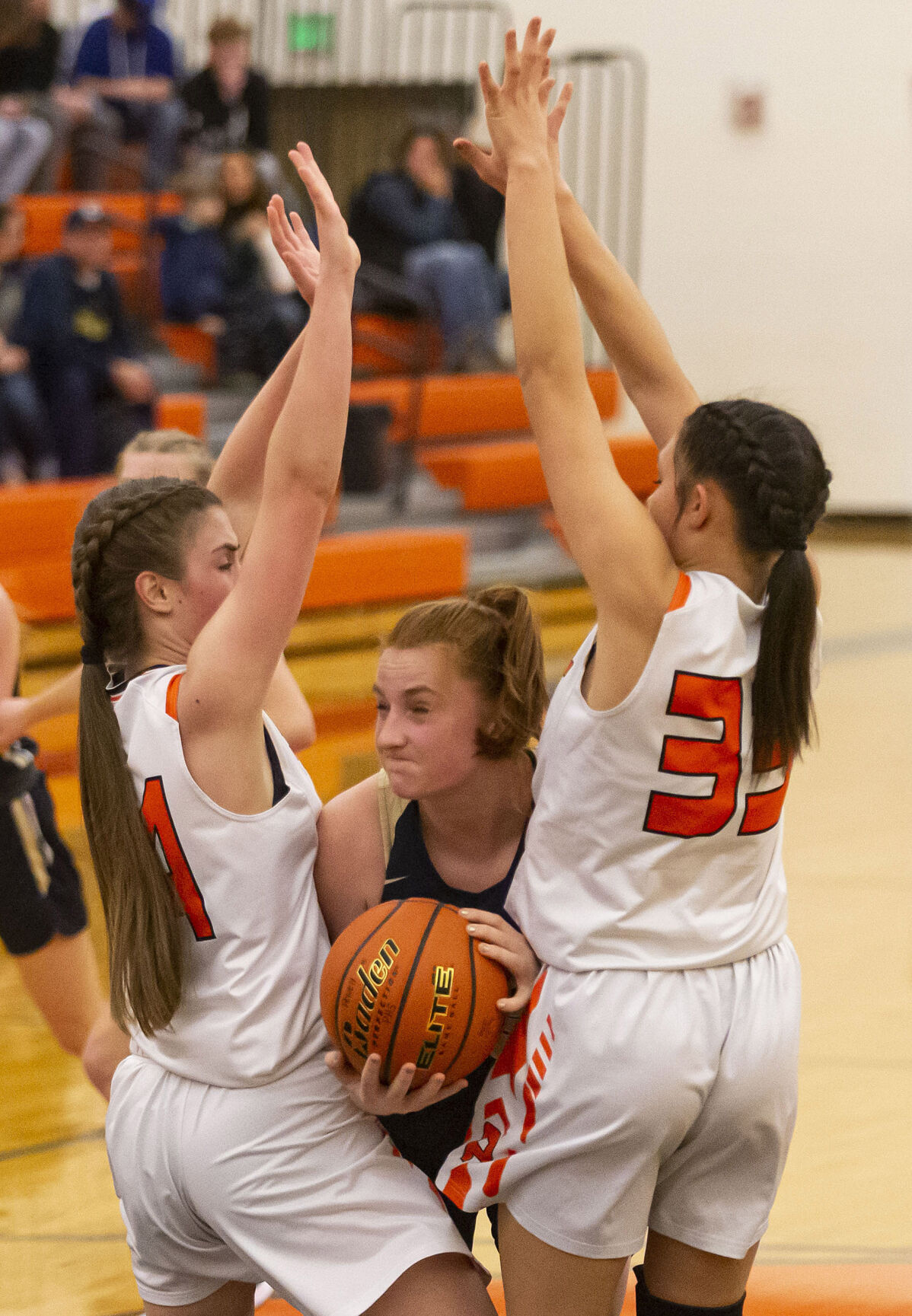 Isabelle Radakovich prepares to make a shot against two Powell opponents on Friday.

Isabelle Radakovich prepares to make a shot against two Powell opponents on Friday.

Molly Hays drained a shot from deep midway through the first quarter to break a 3-3 tie and spark a 20-0 run Friday night as the Cody girls basketball team improved to 4-0 on its way to overwhelming Powell in a 51-17 win.

Hays finished with 21 points on the night and Kennedi and Reece Niemann each added seven as the aggressive Fillies defense held the Lady Panthers in check and the offense knocked down open shots all evening.

“We moved the ball really well,” coach Chris Wagner said. “Maybe we weren’t patient with the ball early on, and then we slowed down, got a little more patient and had good ball movement all around and got some good looks.”

Early in the first quarter it appeared the cross-county rivals were a little more evenly matched than what the statistics might have said, but after the flood gates opened it became clear which the highly ranked 4A team was on the floor.

A block by Reece Niemann midway through the opening frame helped lead to a Hays post up and score to make it 8-3 early in the Fillies’ big run.

Ally Boysen scored in transition to make it 10-3 Fillies with 2:35 to go in the frame.

Hays then got a bucket and the foul after her own steal in the backcourt to put the Fillies up 10 on her way to a 12-point first quarter.

“Our aggressive defense was what helped us so much,” Hays said. “We put on a lot of ball pressure and then ran the floor and that helped us get a lot of easier buckets.”

Jessa Lynn and Reece Niemann drilled consecutive jumpers from the right elbow and Hays drained another shot from deep to get the Fillies up 20-3 heading into the second quarter, and once that energy started flowing on the Cody sideline, the opposite happened for the Lady Panthers.

Powell was held to just three points in the first period and two points in the third as those continue to be strong quarters for the Fillies this season.

“We have always taken so much pride in how we defend every team and each game we seem to improve in a different aspect of that,” Reece Niemann said.

Megan Jacobsen ended the scoring drought for Powell minutes into the second quarter to make it 23-5 Fillies.

Hays, however, connected on another 3 pointer and Lynn hauled in one of a number of offensive rebounds and got the put back to put the Fillies up 32-7 as the onslaught continued.

“Powell packed in the zone probably based on how we shot it over in Gillette,” Wagner said. “But we were able to knock down some shots and got some offensive rebounds which is nice against the zone.”

Victory Buck nailed one of her two shots from beyond the arc after another second chance opportunity, and Hays found an open Kennedi Niemann on a drive and dish and she connected from deep at the buzzer as the Fillies took a convincing 38-9 lead into the locker room at the break.

“I think we have shooters everywhere on the floor which is a huge strength for us and makes us a much harder team to defend,” Reece Niemann said. “We also have various people who can play anywhere on the court so that makes it difficult to guard us as well.”

Hays finished with 17 points in the first half.

Cody opened the third on a 6-0 run on buckets by Boysen, Hays and Reece Niemann. When Powell finally did get on the board in the third, Buck answered with her second 3 pointer to make it 47-11 Fillies.

“If Victory has the space to shoot, she is dangerous,” Wagner said. “She gets the ball off quick and can make some shots.”

After an Izzy Radakovich stuff on the defensive end, Hays ended up at the line on the other end where she put the Fillies up 51-11 with under a minute to go in the third to initiate the running clock.

Cody cruised to the 34-point win to remain undefeated on the season.

Catelynn Foy was the leading scorer for Powell with eight points. Saige Kidd added six points in the loss for the Lady Panthers.

Cody’s Friday matchup with Sheridan will be rescheduled due to illness in the Sheridan program.

Cody will have a bit of a break before hitting the road Jan. 4 for a matchup with Worland.

“We’ll try to find ways to get some work in over the break,” Wagner said. “Hopefully we can set up something competitive. It’s nice to go into the break with a win, but we have to find a way to refocus before we go to Worland.”