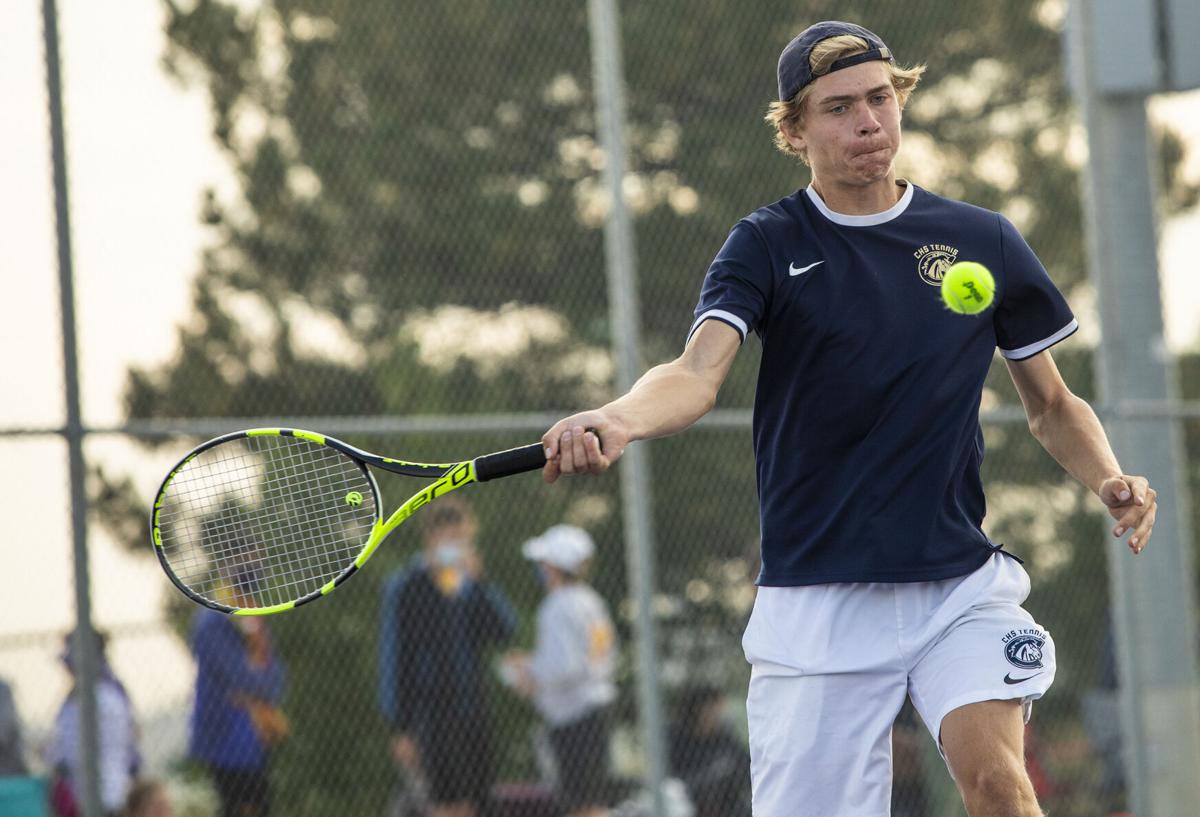 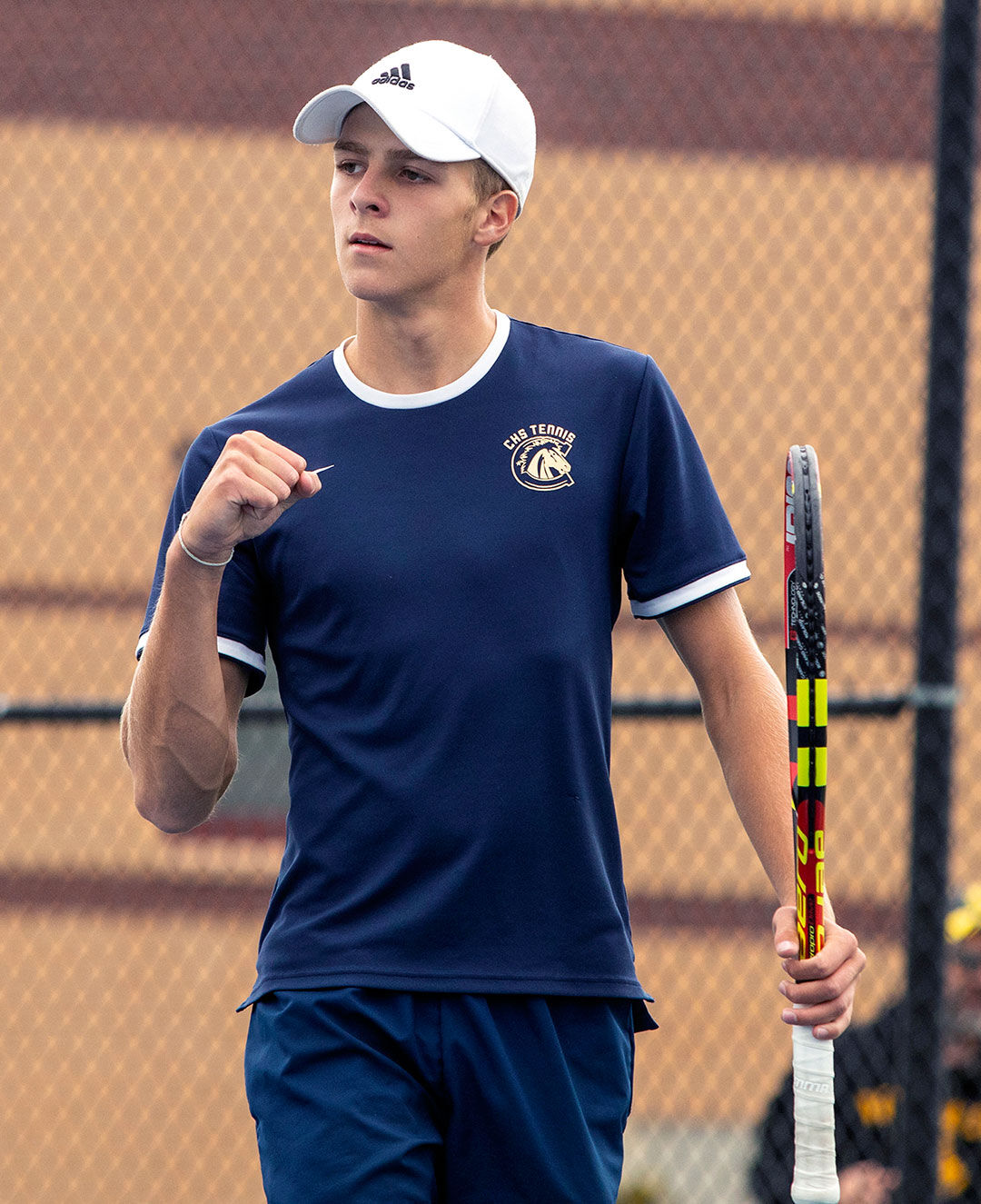 Hayden DeMaranville celebrates after scoring a point in No. 1 doubles. 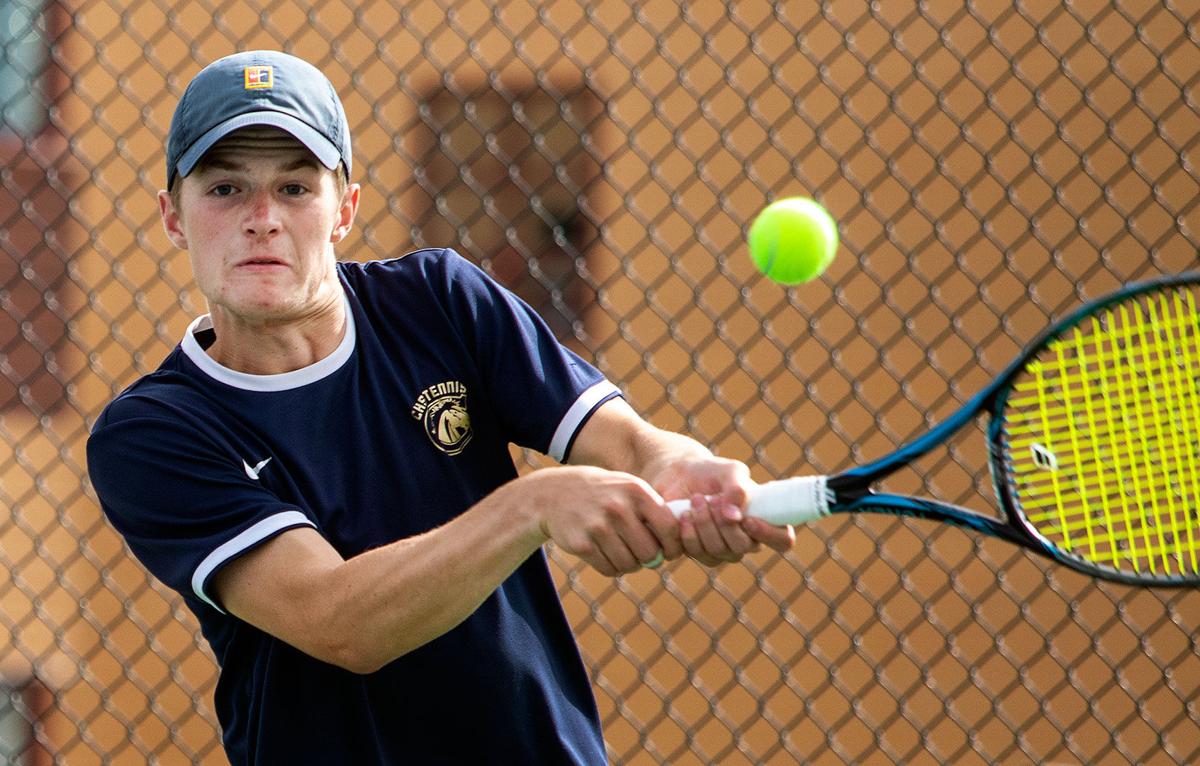 Solomon Stewart and his partner Hayden DeMaranville finished fourth in No. 1 doubles during the state tournament in Gillette.

Hayden DeMaranville celebrates after scoring a point in No. 1 doubles.

Solomon Stewart and his partner Hayden DeMaranville finished fourth in No. 1 doubles during the state tournament in Gillette.

After a strong showing at regionals, the Cody High School tennis teams faced tough seeding in Gillette for the state tournament. The Broncs finished fourth in their final matches of the season, while the Fillies finished 10th.

With both teams spread out over four locations in Gillette, players were at times without a coach. That didn’t stop the Broncs from putting together a solid showing in the state tournament.

After finishing 11th in 2019 and returning many of the same players, the Broncs cracked the top-five at state.

C.J. Dominick at No. 2 singles and the combo of T.J. Smith and Neil Markert at No. 3 doubles secured third-place finishes in their brackets. Dominick had to battle through bad weather in his final match to secure the bronze in his first appearance at state.

“It was extremely windy,” Dominick said. “There were lots of leaves blowing on the court... Eventually, I found my groove and was able to will it out.”

Smith and Markert matched up against Kelly Walsh’s Treydon Ward and Colten Atkinson in the quarterfinals, a duo they had beaten twice before in marathon three-set matches. This time, Ward and Atkinson got the better of the previously undefeated duo, upsetting one of the top No. 3 doubles teams in the state in straight sets. Up to the challenge in the consolation bracket, they were able to win out and claim third.

Solomon Stewart and Hayden DeMaranville faced and fell to eventual state champions George Gervais and Jackson Santamauro from Jackson Hole in the state quarterfinals for No. 1 doubles. They battled through the consolation bracket but fell for the second time in two weeks against Kelly Walsh’s Buck Harris and Drew Rasmussen in the consolation bracket championship.

After getting bounced from the first round by Green River’s Caden Grubb, coach Jason Quigley said No. 1 singles Cody Champlin “played the best he’s played all year.”

“He won four in a row,” Quigley said. “He played fantastic.”

Champlin cruised through the consolation bracket only to meet Sheridan’s Reed Rabon in the battle for third. Rabon has had Champlin’s number all year, but the Bronc didn’t go down without a fight, winning his first set before dropping the next two while fighting the wind en route to a fourth-place finish. It’s Champlin’s best finish in the tournament in his three-year career.

“I just wanted to give him a good match,” Champlin said of opponent Reed Rabon. “The last two times we played I played awful ... I’m glad Reed did as well as he did.”

At No. 2 doubles, Tristan Dollard and Mitchell Schwab lost in the quarterfinals to Campbell County’s Jason Fink and Logan Dymond in straight sets before heading down to the consolation bracket. They picked up a win in their first match against Cheyenne East’s Logan Davis and Kael Lissman in straight sets but were defeated in the consolation quarterfinals by Laramie’s Marcos Johnson-Noya and Walter Wiederholt.

After a second-place finish in the regional tournament, the Fillies faced tough seeding and struggled at state. The Cody girls only advanced past the second round with one team, the No. 2 doubles pairing of Sage Crofts and Hudson Selk.

Crofts and Selk made fairly easy work of their first two opponents but fell to the eventual state champions from Cheyenne Central, Sarah Foster and Kaitlyn Ackerman. Dropping two in a row for the first time this season, they lost in the consolation semifinals to Olivia Webb and Kathleen Wylie. The top-finishing Fillies wrapped the tournament in the fifth/sixth-place spot.

Coming into the season as a state doubles champion, Anna Brenner made the switch to the solo game at No. 2 singles this year. Posting a third-place finish in regionals, Brenner drew a tough opponent in Laramie’s Kylee Cox but lost her first match in straight sets. It didn’t get any easier for Brenner in the consolation bracket, playing against Green River’s Megan Counts and losing again in straight sets.

The No. 1 doubles team of Ash Staggs and Soffy Anderson had designs of repeating their state title runs from a year ago in this tournament after finishing third at regionals. After rolling past the Rock Springs duo of Rikki Cozad and Kayleigh Hamblin in straight sets, Staggs rolled her ankle in the second round, causing a forfeit. Karina Schoessler filled in for Staggs in the consolation bracket, but Thunder Basin’s Maggie Bruse and Autumn Lund proved to be too much and defeated the Fillies in straight sets, 6-4, 6-3.

Freshman No. 1 singles player Raegen Staggs made her state tournament debut after a third-place regional finish and faired admirably against a tough draw. After losing in the second round to Torrington’s Sera Glass, Staggs dropped a second match in the consolation bracket to Campbell County’s Alexa Richert, 2-6, 2-6.

The No. 3 doubles team of Tashi Mathuin and Sarah André finished third in the regional tournament, but the seniors still had a tough draw in Gillette. After losing a tight match in the first round of the tournament to Torrington’s Sydney Harris and Theona Haines, they advanced in the consolation bracket to face a familiar foe in Sheridan’s Gillian Mitzel and Allison Ligocki in Round 2. They’ve met twice this season, splitting the matches. Mitzel and Ligocki had the advantage this time and took down the Filly seniors in straight sets.

“Every single kid did what they had to,” Quigley said. “Even the matches we lost they played fantastic. I felt like we worked super hard. It was very rewarding to see that.”