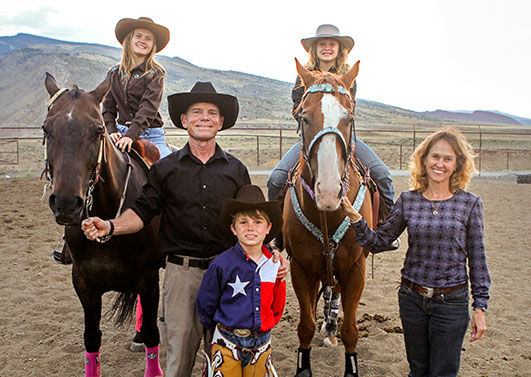 The Eubank family (from left) Sahale, 14, David, Peter, 9, Suuzanne, 13, and Karen are missionaries who come to the Cody Nite Rodeo every summer for about a week. The girls compete in barrel racing and Peter in junior steer riding. 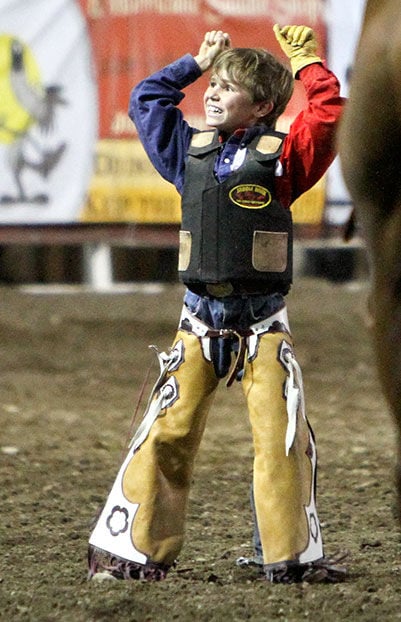 Peter Eubank is all smiles as he thanks the crowd for their support after competing in junior steer riding Aug. 7 during the Cody Nite Rodeo. 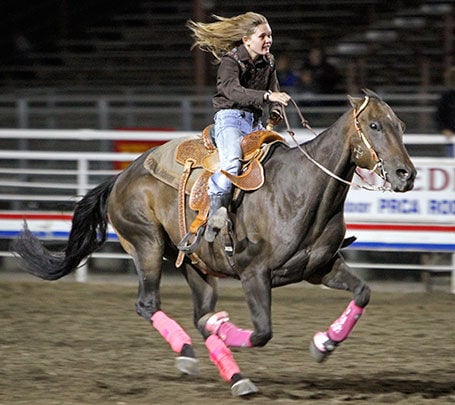 The Eubank family (from left) Sahale, 14, David, Peter, 9, Suuzanne, 13, and Karen are missionaries who come to the Cody Nite Rodeo every summer for about a week. The girls compete in barrel racing and Peter in junior steer riding.

Peter Eubank is all smiles as he thanks the crowd for their support after competing in junior steer riding Aug. 7 during the Cody Nite Rodeo.

Unite and work for freedom, justice and peace.

Forgive and don’t hate each other.

This is the creed of the Free Burma Rangers, a multi-ethnic humanitarian service movement bringing help, hope and love to people in the war zones of Burma.

The Free Burma Rangers were founded in 1997 by David Eubank, a former U.S. Army Ranger, who serves with his wife Karen, and children Sahale, 14, Suuzanne, 13, and Peter, 9.

“People’s lives are changed when you go serve,” David said. “You feel in your heart God’s presence and you see people doing brave things. The people’s attitude is don’t give up. Their village may have been burned down three times and they vow to build it back three times. They keep believing.”

The family was in Cody on Aug. 4-7 to participate in the Cody Nite Rodeo.

“It’s really fun,” Karen said. “It’s a great place to race and the kids have learned a lot of skills and values through the opportunities they’ve been given.”

The Eubanks first attended the rodeo as spectators in 2011. The children have grown up riding horses and decided competing looked like so much fun, they should try it themselves.

So they approached Bob DeRoche of Cedar Mountain Trail Rides and asked if they could “rent” one of his horses for barrel racing. He agreed, and Sahale and Suuzanne signed up to compete. After their first run, Felicia Miller offered them an actual barrel horse. Peter also borrowed gear to try his hand at junior steer riding.

Since that first year, they make it to Cody for about a week each summer and borrow horses from Ashley Smallwood.

“The generosity of people has made this possible,” David said.

Last Friday, they were prepping for their final performance before driving through the night to Washington state, where David was scheduled to speak at a church Sunday.

Sahale, who competes in the adult barrel racing, said she enjoys how fast it is.

“I’ve always loved horses and riding and this is fun,” she said. “It’s been awesome. I have a horse called Chex and he knows the pattern.”

Suuzanne won a night of junior barrels last season but has had some difficulties with her horse this year.

“My horse has fought me around the barrels,” she said. “But I like barrel racing because of the exhilaration and how you have to work with your horse.”

They attended a three-day rodeo camp where they practiced before coming to Cody.

Peter also worked on steer riding at the camp and it paid off, as

he won the event early in the week.

“It felt good,” he said. “I thought I’d stay on but I was close to falling off. The rodeo camp taught me how to stay on better.”

The Eubanks are always up for adventure whether it’s rodeo, surfing, climbing, hunting, skydiving, or going into war zones to help people in need.

“In 1993 I was invited by a missionary to come to Burma and help,” David said. “So we got married and three days later we went over.”

More than 60 years of civil war in the country has left thousands killed and millions displaced from their homes in resistance areas.

“We go into fighting areas to document their situation and tell their story,” David said. “We go in where families are hiding to set up aid stations.”

Currently 70 teams consisting of 4-6 people are active in Burma. The group has also sent teams to help in Sudan, and in May they were in Iraq, helping people displaced by ISIS in Kurdistan.

“When we got there the kids and I helped families carry wood and water, and harvested wheat,” Karen said.

They also did a children’s program called Good Life Club – a day program for their “spirit and body.”

“We were one kilometer from ISIS,” she said. “If they started shooting and the people ran to hide, we went also.”

The Free Burma Rangers have a rule that they don’t run from attack if people they’re helping can’t run.

“It there’s one family left we stay with them,” David said.

Karen said she does worry about the safety of her children, but felt “God say early on this is something significant you can give your kids.”

“They’ve learned greater compassion because our teams are ready to go in crisis,” she said. “They’ve also learned hospitality. One of the greetings there is ‘Come and eat with me.’”

It’s also taught them all life is precious.

“They’ve had a rich childhood,” she said.

While she and the kids stay with the displaced in camp, David tends to go closer to the actual fighting with soldiers on the front lines.

“ISIS tried to run us out of our position,” he said. “We were in a mortar attack for 30 minutes, but being there with them enables people on the front line to trust us.”

He said he’s also come under direct attack in Burma multiple times. And while he and his family have been OK, Free Burma Rangers has lost members in the field.

“Sometimes you get afraid, but we feel that’s where God wants us,” he said. “Crisis brings out the heart of people. When there’s struggle you gain things you might not in luxury.”

Once a year the Eubanks return to the U.S. to visit family, speak at churches, testify in front of Congress about the conflicts and enjoy a little down time, which includes competing at the Cody Nite Rodeo. They plan to return to Burma this fall.

(Amber Peabody can be reached at amber@codyenterprise.com.)