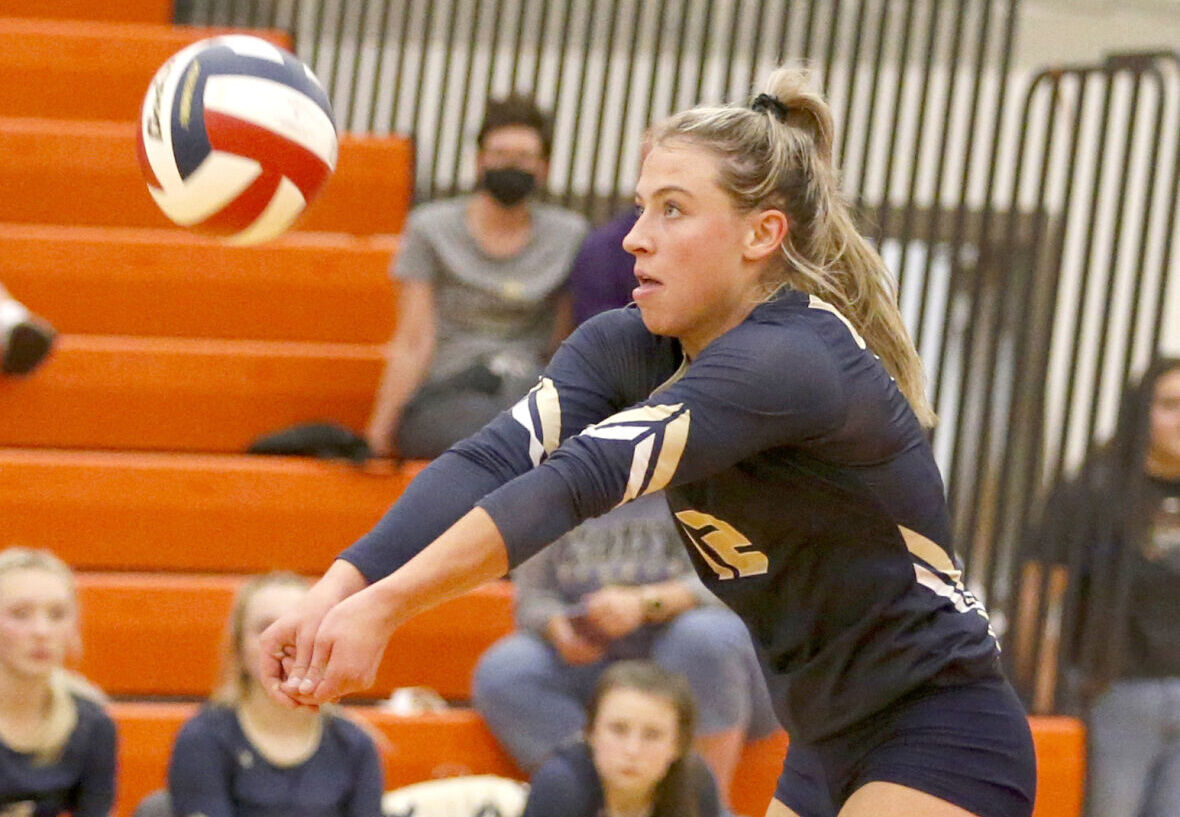 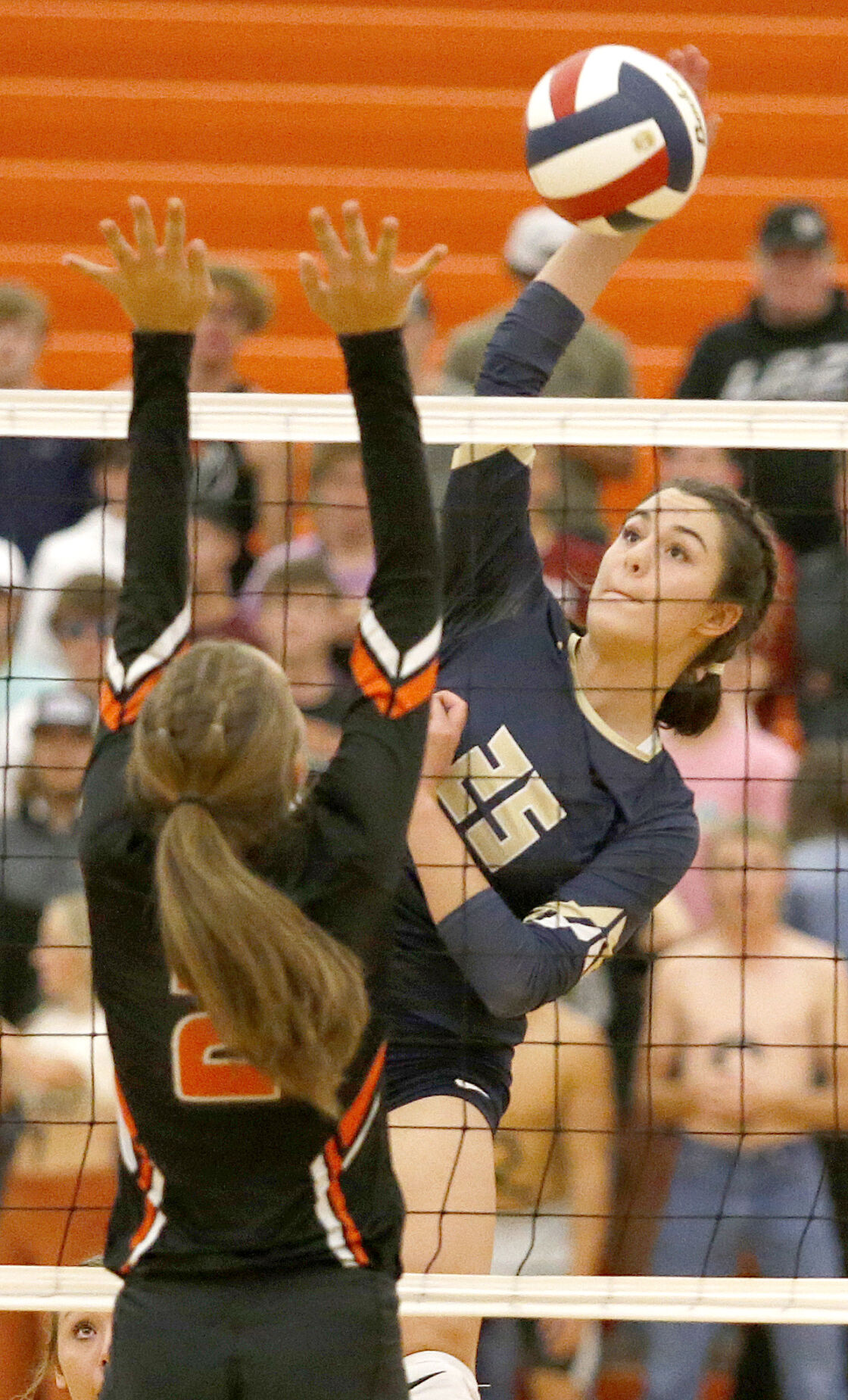 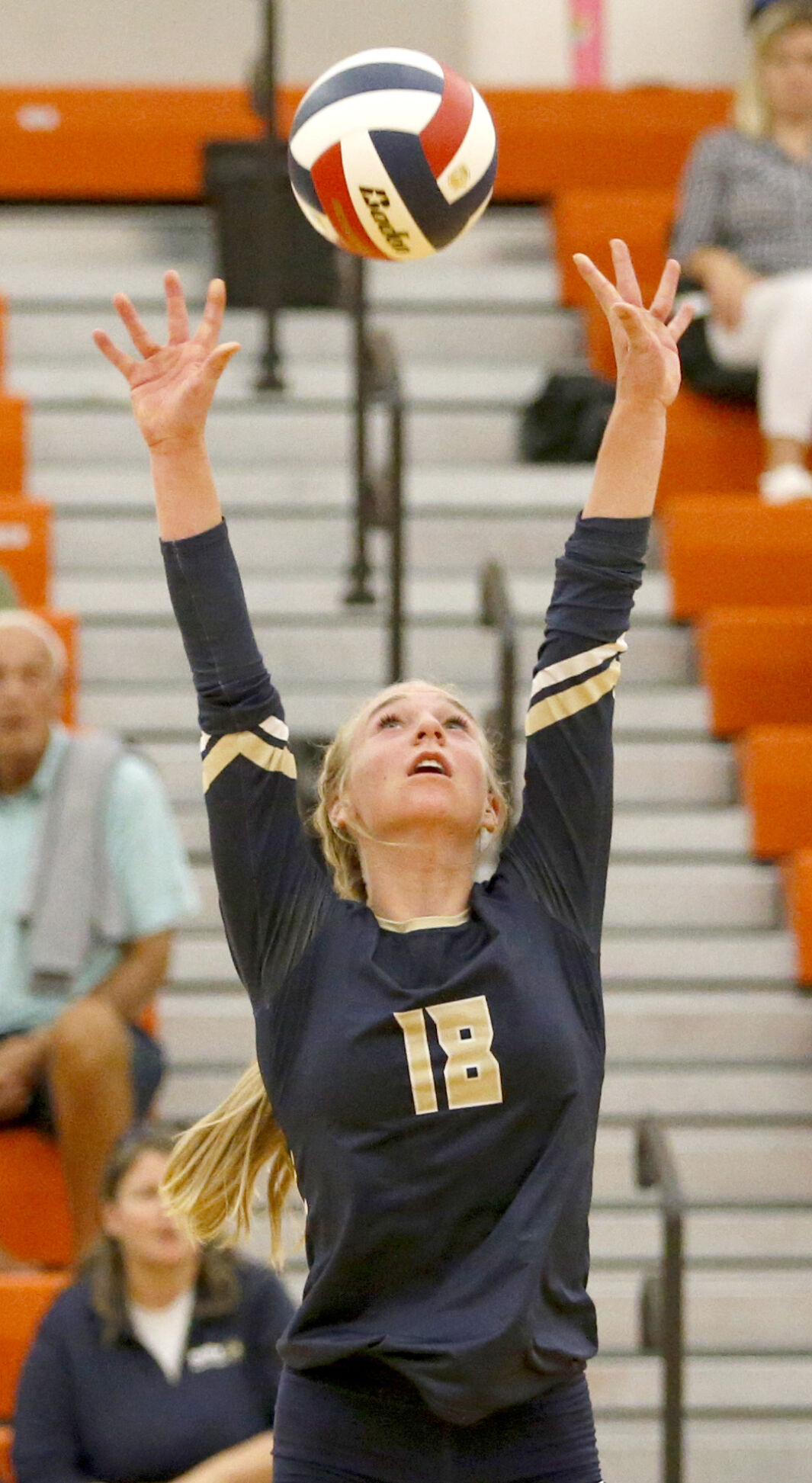 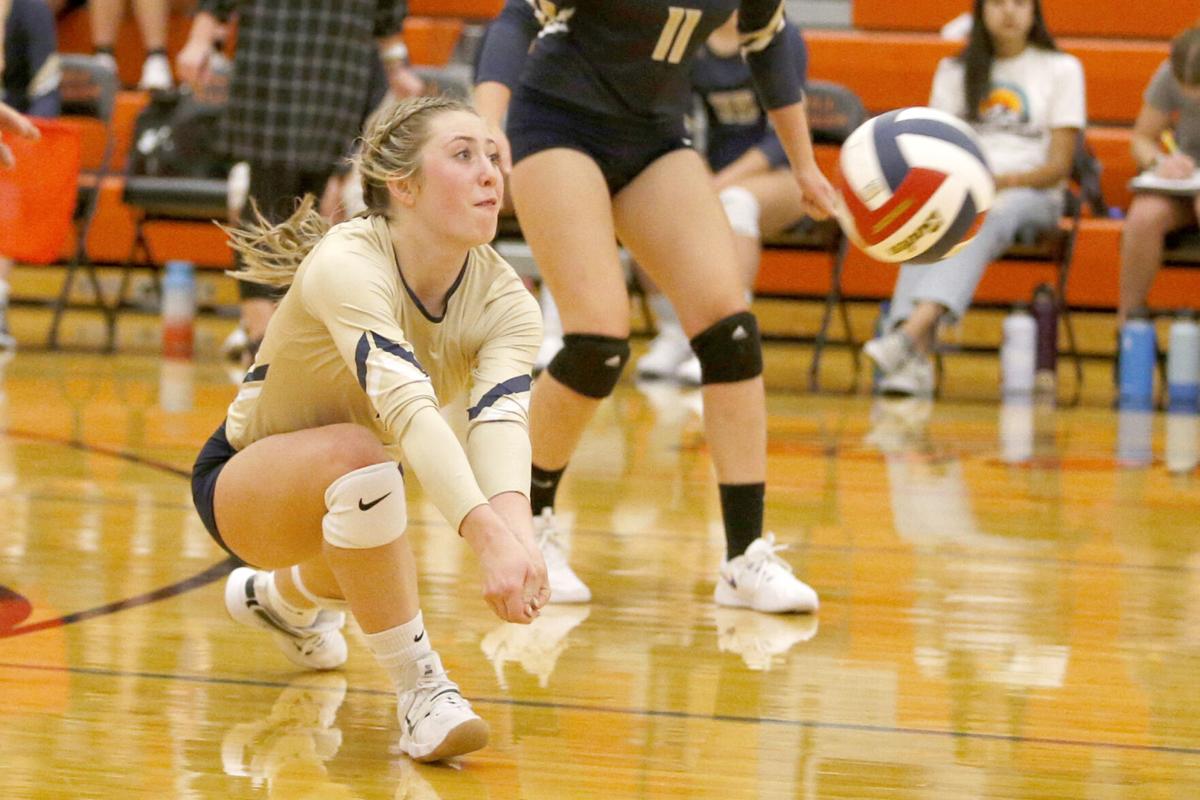 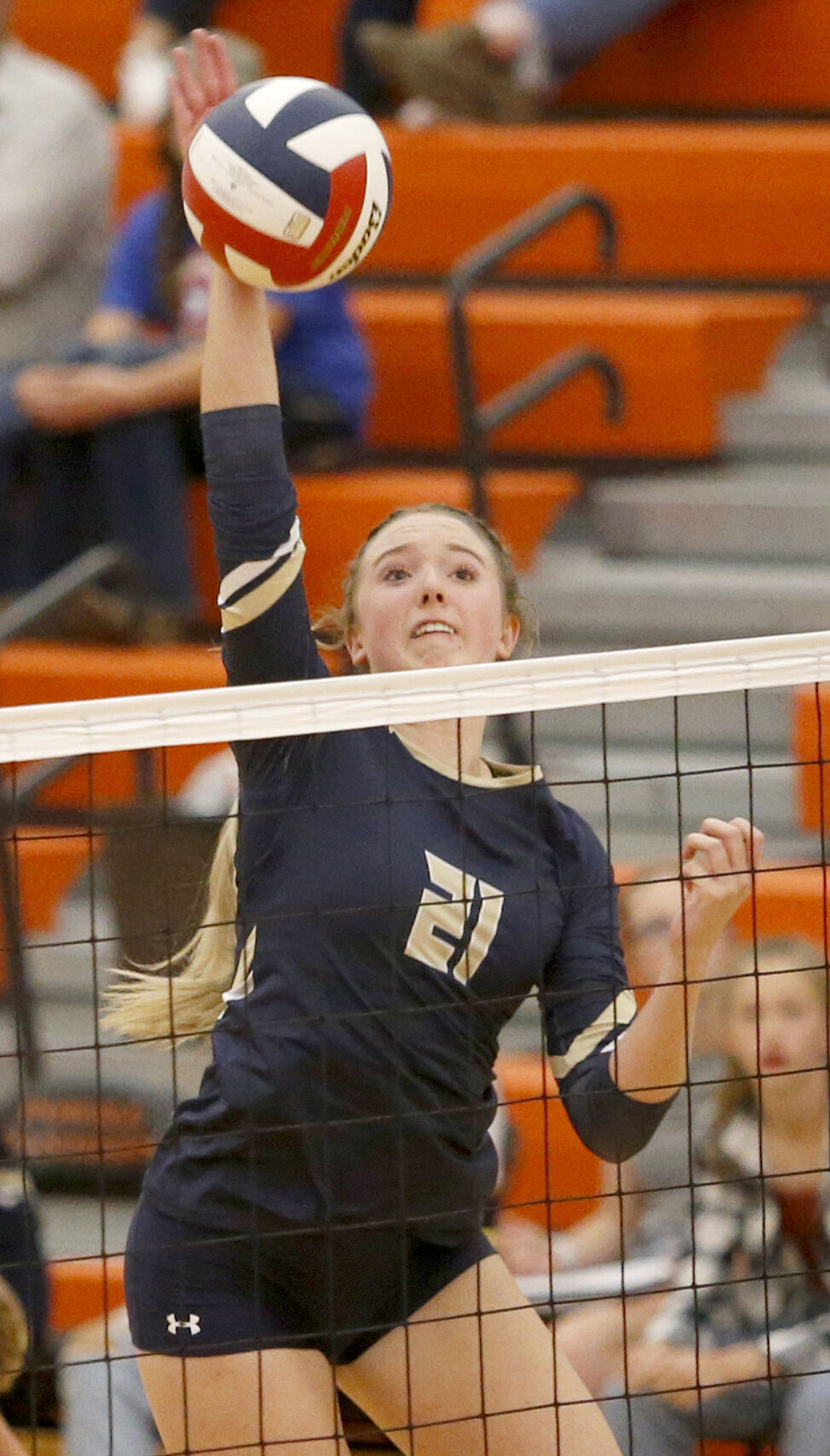 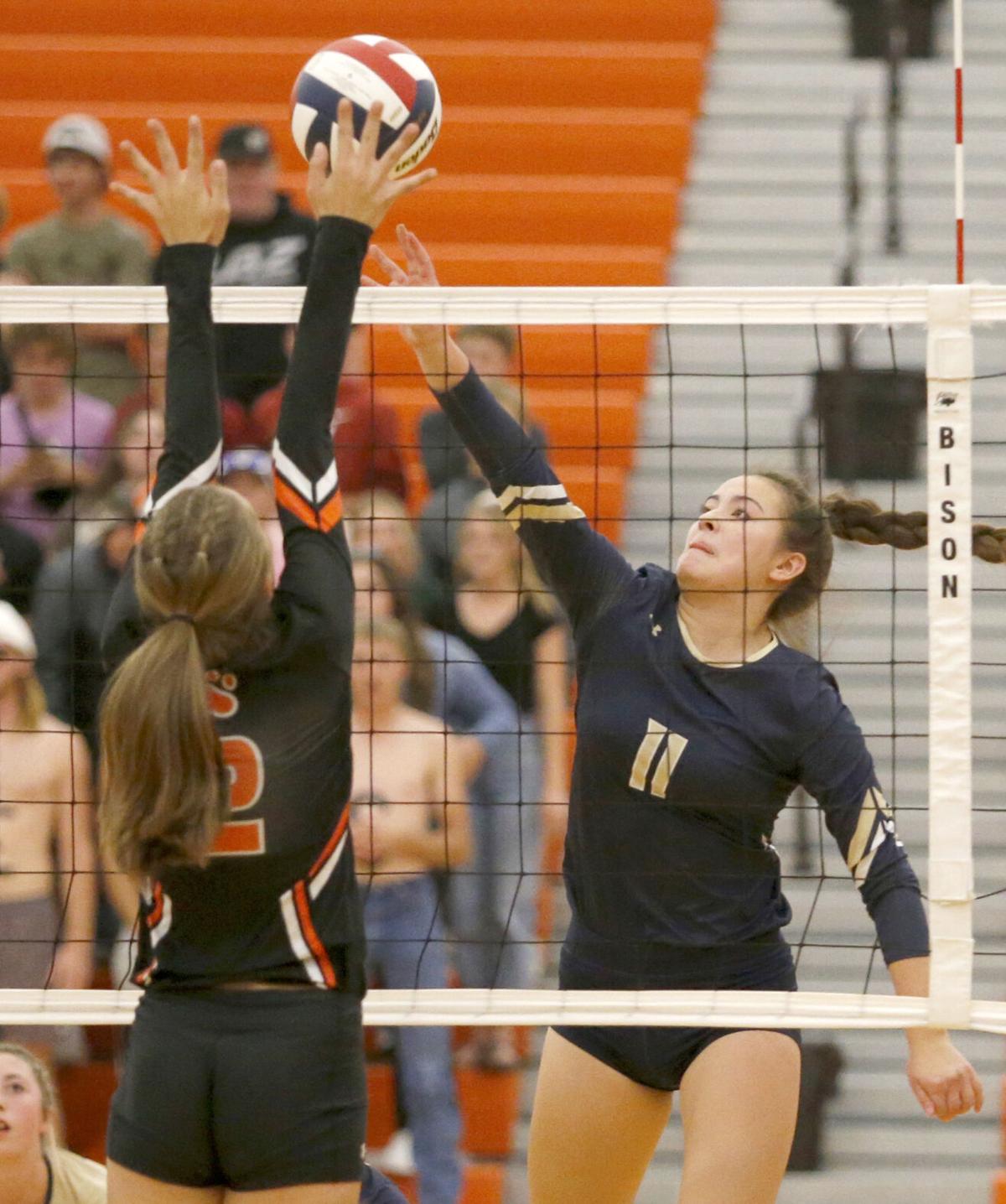 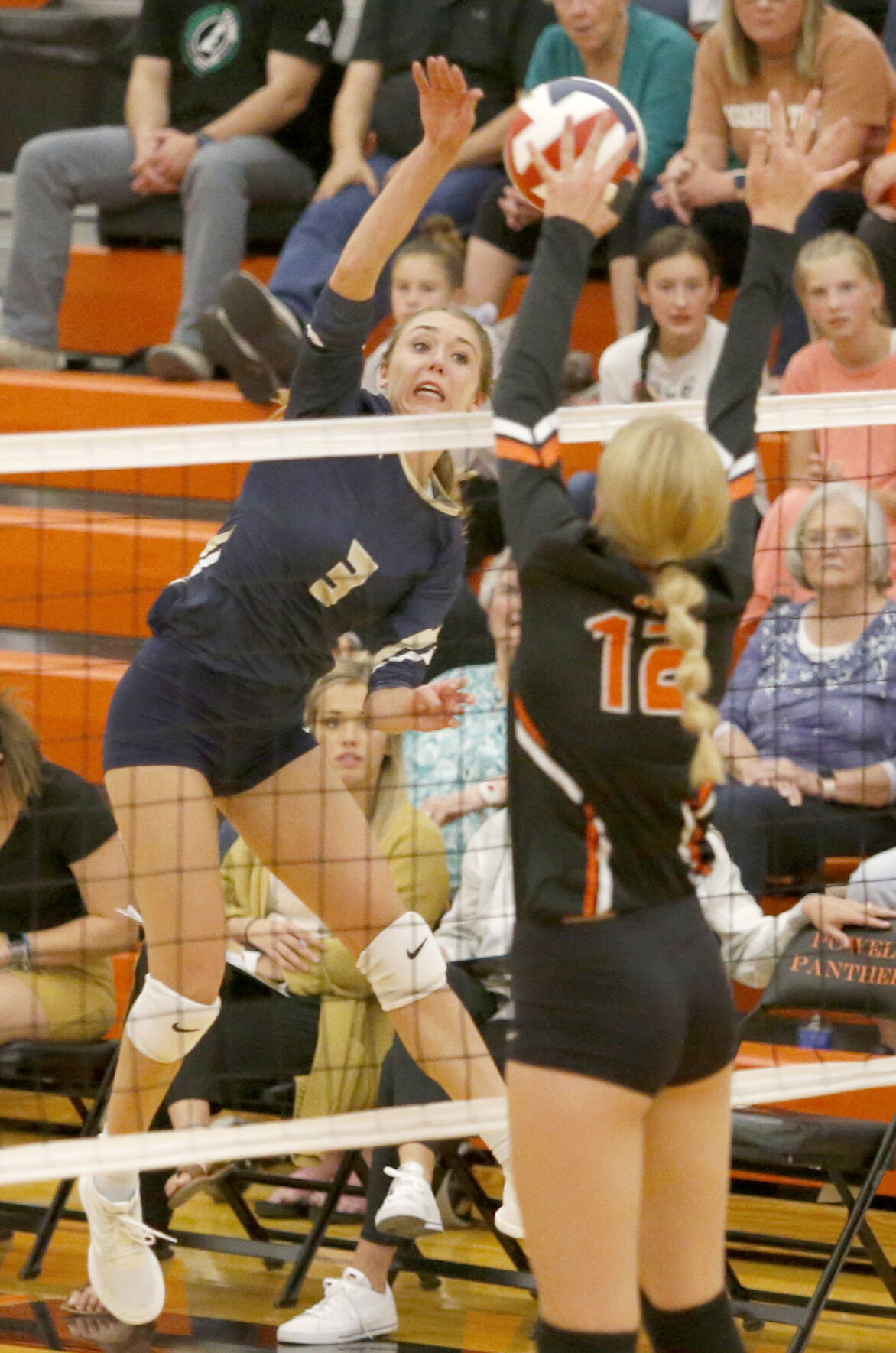 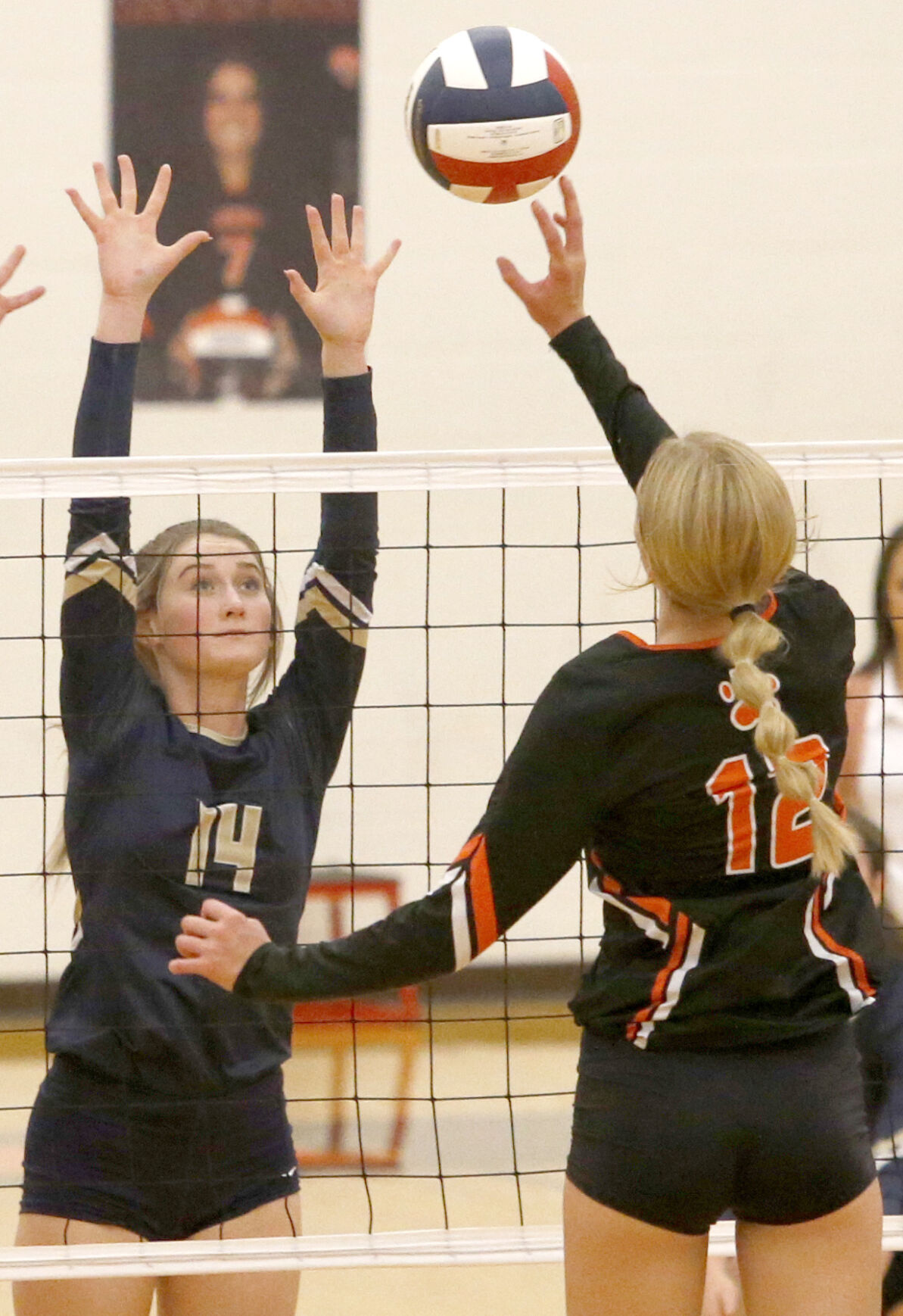 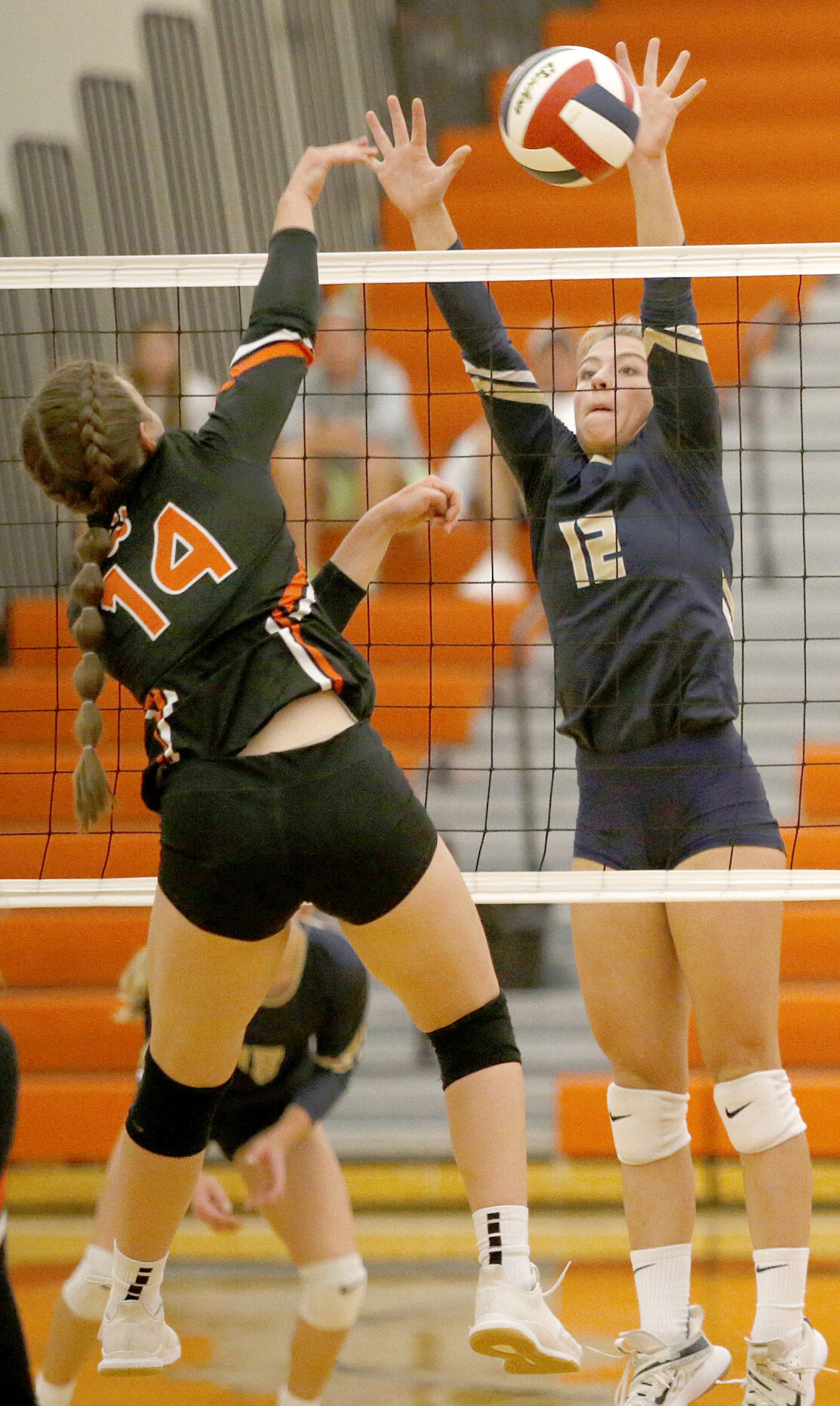 Ava Meier goes for a block. 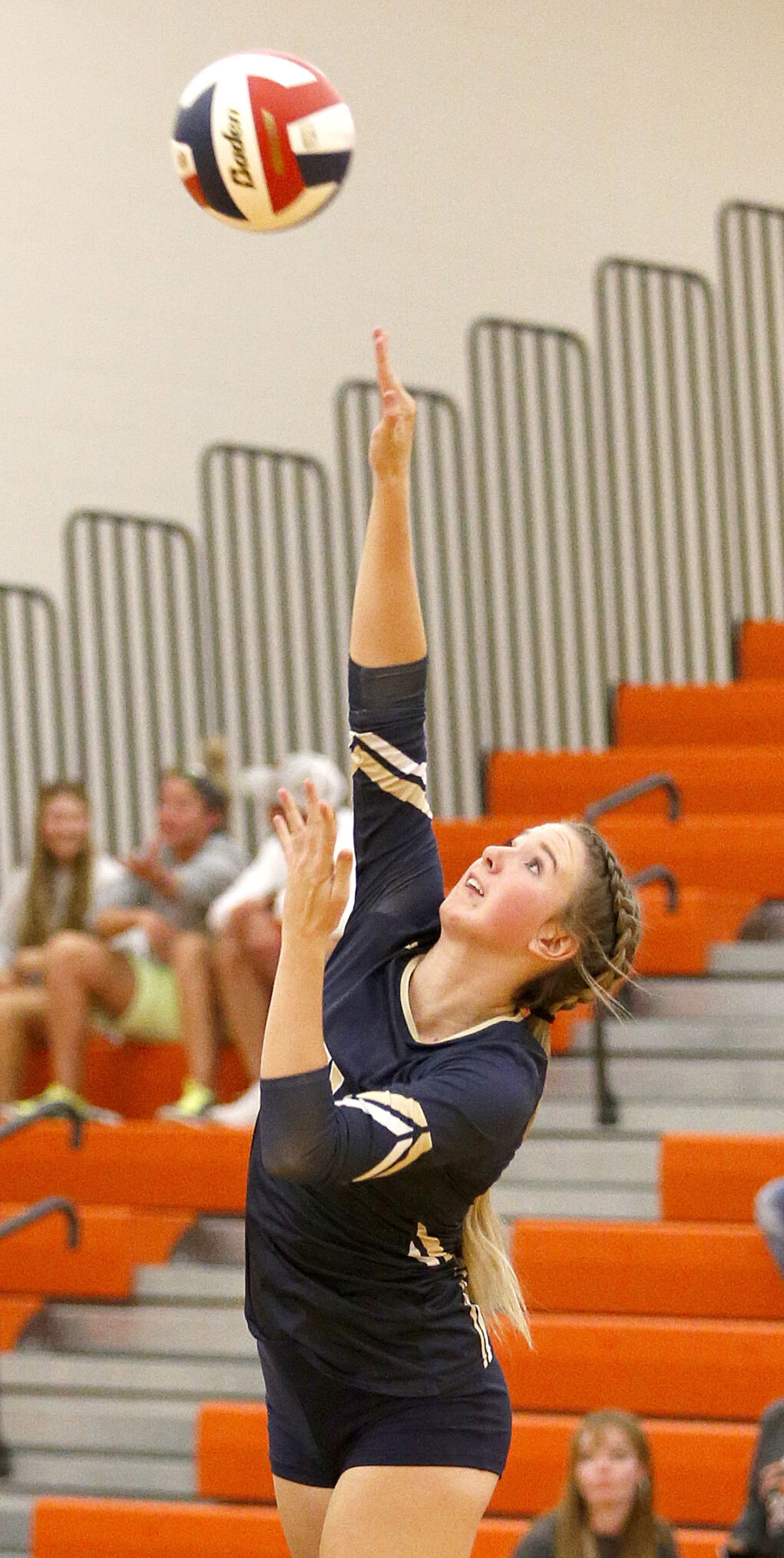 Ava Meier goes for a block.

Whether it was the distraction of homecoming week, or players who weren’t 100% or the difficult atmosphere, the Cody volleyball team had to dig deep to defeat Powell 3-1 on Thursday in Powell.

“The No. 1 positive I took away was the persistence of the girls,” coach Nicole Gwynn said. “There were a few times they could have crumbled and let the match go, but they refused. I also loved seeing girls come off the bench ready to play hard and confident.”

The Lady Panthers came out full of energy in the first set and caught the Fillies off guard. Cody trailed the entire set, unable to find an offensive rhythm and struggling with the Powell block. The closest the Fillies would get was within four points before Powell pulled away to win 25-17.

“I’m not sure they were very focused before the match which translated into the beginning of the match,” Gwynn said. “We also had a couple of girls who weren’t feeling 100%. Add that to the heat of the gym and the noise and it equals a tough game.

“Powell played a great game. I could tell they’ve been scouting us and they had us figured it out the first set.”

Cody got off to a better start in the second set as the team traded points back and forth. The Fillies took a slight lead after a net serve and hitting error by Powell, block by Reece Niemann and kills by Kennedi Niemann to make it 10-6. The Fillies maintained a three-to-four-point lead through the middle and went up by six after a kill by Autumn Wilson and carry to make it 18-12.

“We focused on our serve receive and made sure we had that down before moving on to set and get a solid hit,” Wilson said. “We also made sure we were conscious of how often they tipped and where they were going to tip to make sure we would be there to get a pass.”

Late in the set a kill by Ava Meier and hitting error by Powell set up game-point, but it took three tries before a kill by Wilson ended the game.

“I thought the team’s best match was the second game because after losing the first we came out fighting and we showed a lot of resilience,” Molly Hays said.

Powell came out strong in the third set and quickly took a 7-2 lead. However, the Fillies slowly started to come back, pulling within in one when Powell got called for four hits and tying the match at 10 after a kill by Kennedi Niemann. Tied again at 11, Cody took its first lead after a kill by Niemann, and two Lady Panther errors to make it 14-11.

“We had a hard time getting in a rhythm because our passing wasn’t as good as usual and we had more missed serves than usual,” Gwynn said. “At different times in the match we would put together a few great things, then miss a serve.  That’s just a huge momentum shift and momentum is critical in volleyball.”

Powell came back to tie it at 16, before a small Cody run which included a kill and block by Autumn Wilson, net serve and in the net call on Powell to make it 20-16.

The Lady Panthers came within two, but kills by Kennedi Niemann and an ace by Reece Niemann gave Cody a 25-20 win.

“I think the reason that we were able to pull away in the third game to win was because we brought a lot of energy and effort and forced them to make the mistakes,” Hays said.

The fourth set found Cody trailing by as many as four points early on, but again the Fillies worked their way back, taking advantage of some Powell errors and an ace by Molly Hays to tie the match at 10 and taking an 11-10 lead on a kill by Kennedi Niemann.

From there the game was close, with seven ties, the final coming at 20-all. A kill by Lake Harrison gave the Fillies a 21-20 lead. It was followed by a hitter error by Powell, ace by Hays, net violation by Powell and second ace by Hays to close out the game at 25-20.

“It felt good to be able to help the team,” Hays said of her aces. “But everyone worked really hard and helped get the win.”

With the win the Fillies improved to 13-3 overall.

“We’ve always been able to grit our teeth and dig deep to find what it takes to win, but tonight especially, we showed who exactly Cody Fillies volleyball is,” Wilson said. “All the girls on the court tonight gave everything they could to make sure we walked away with our heads high.”

The Fillies travel to Natrona on Friday and host Rock Springs on Saturday at 2 p.m.