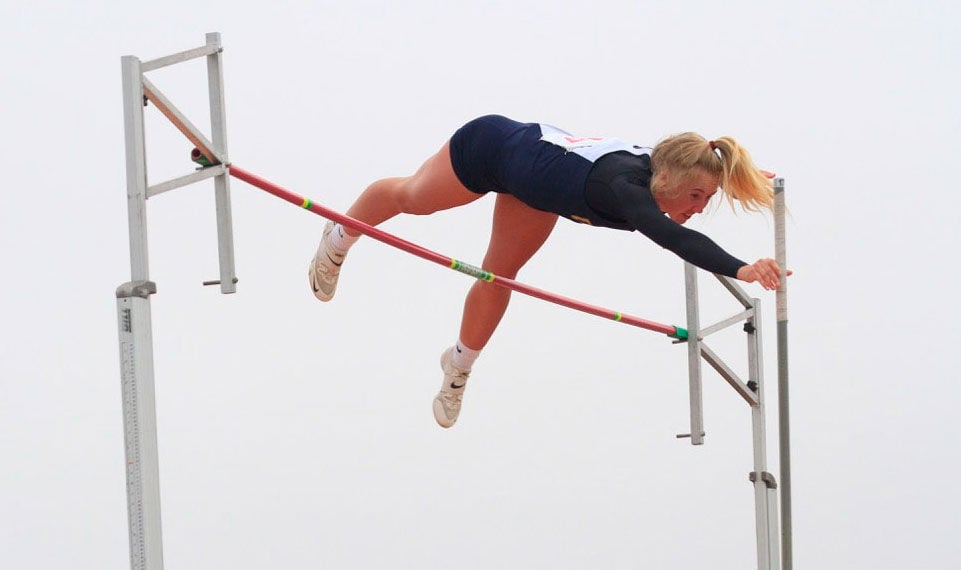 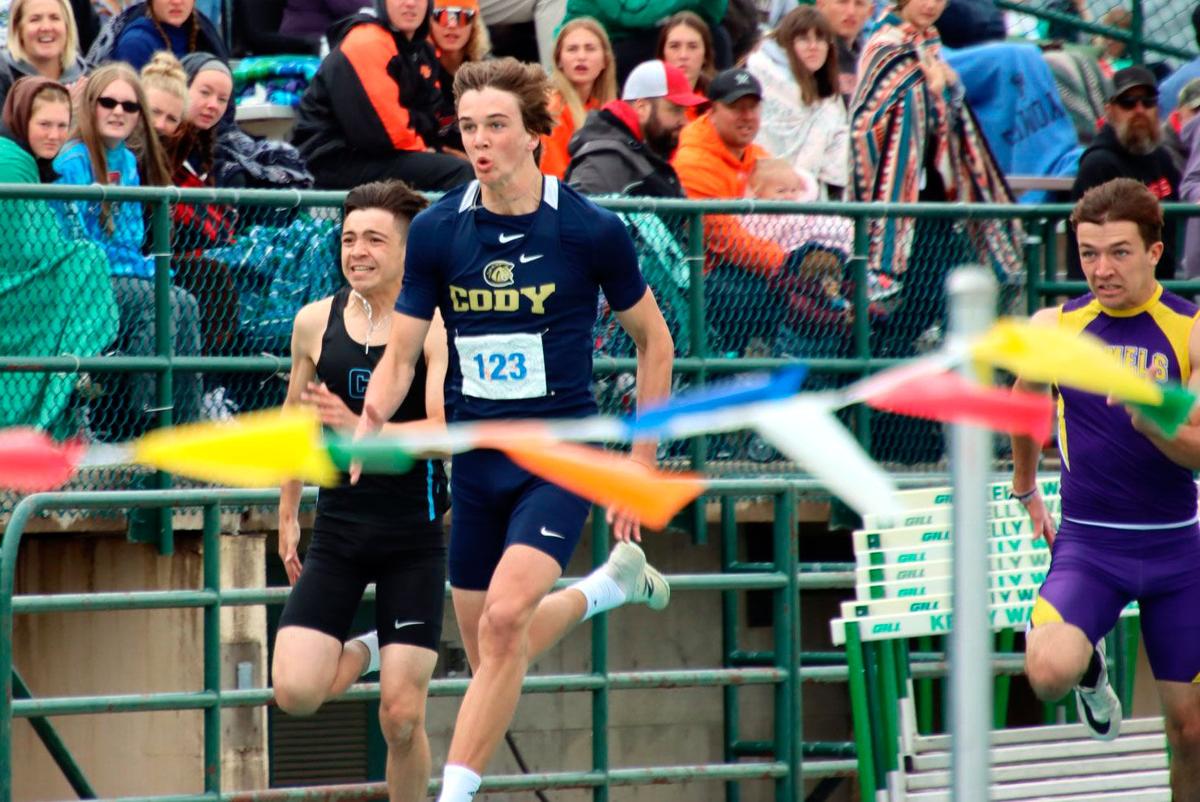 Luke Talich runs in the 200-meter finals last weekend at state. He finished third in the event. (Photo by Angie Erickson) 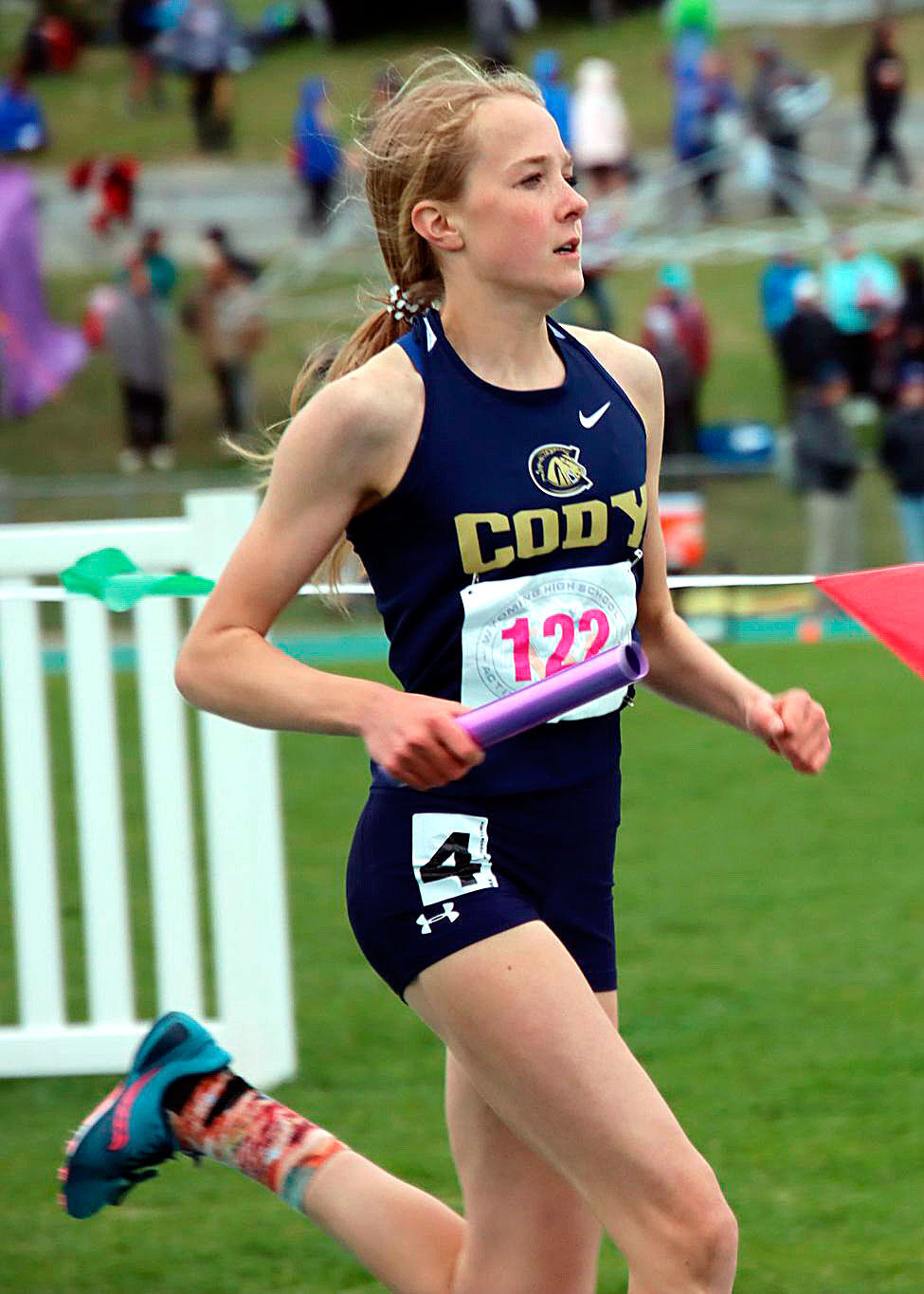 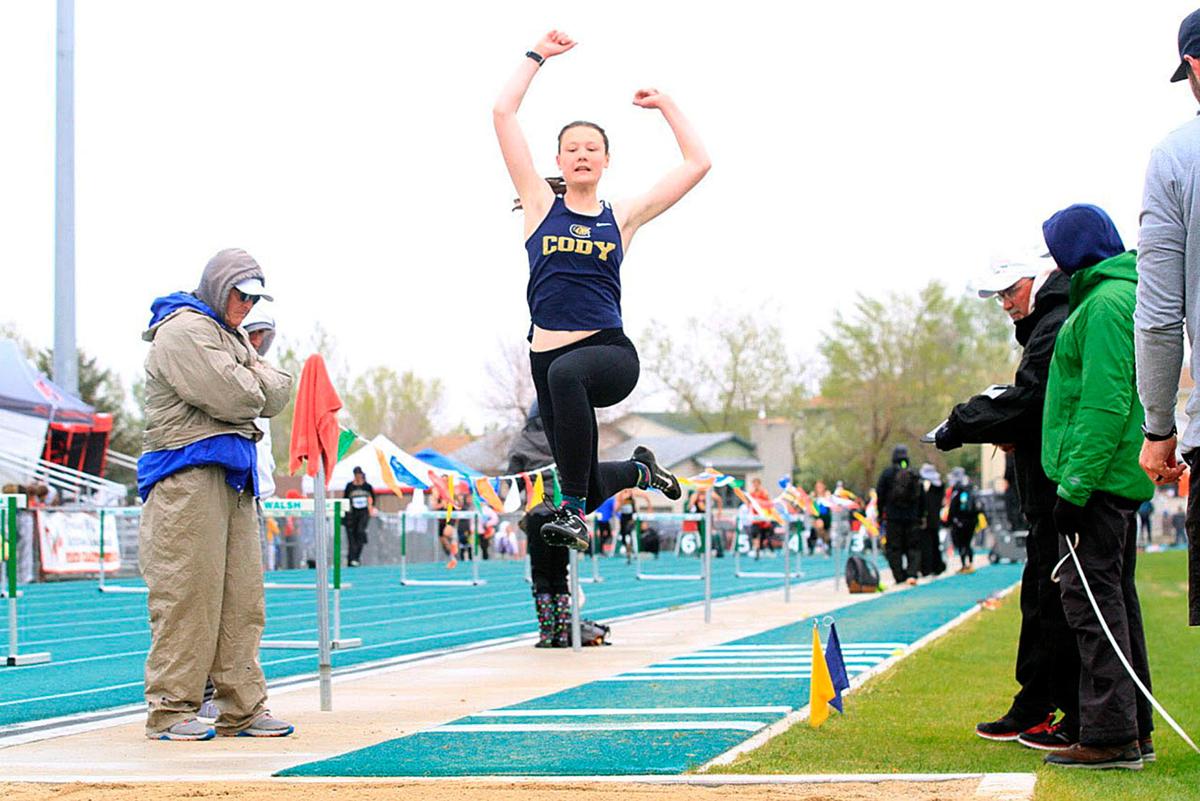 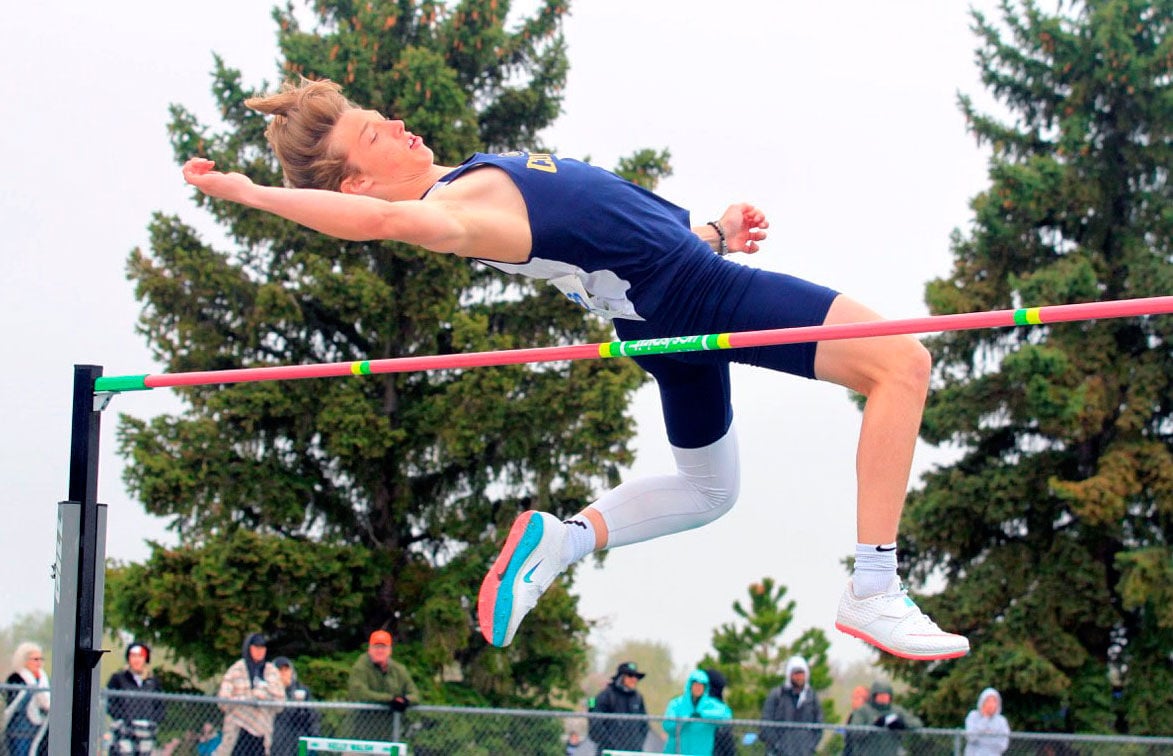 Robby Porter competes in high jump at state. After success early in the year, he was injured and missed much of the season. He scratched at the meet. (Photo by Chase Vialpando/Douglas Budget) 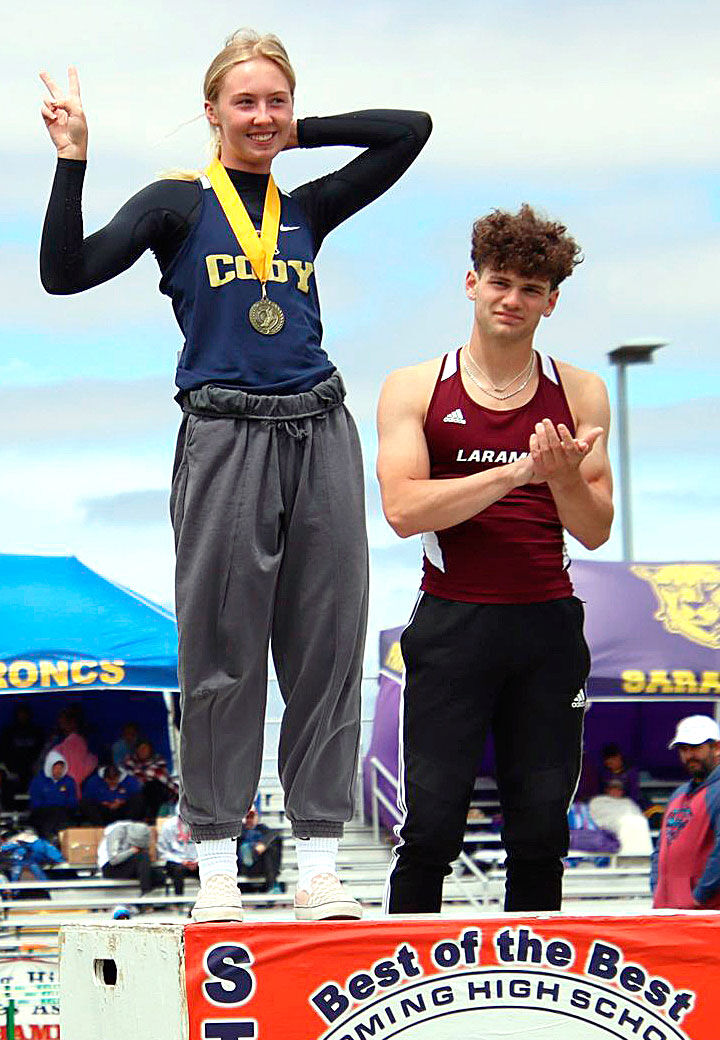 Grace Shaffer receives the Best of the Best award Friday for having the top pole vault mark for girls at the state track meet in Casper. (Photo by Angie Erickson) 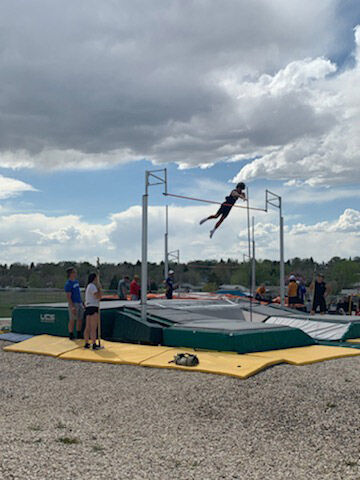 Luke Talich runs in the 200-meter finals last weekend at state. He finished third in the event. (Photo by Angie Erickson)

Robby Porter competes in high jump at state. After success early in the year, he was injured and missed much of the season. He scratched at the meet. (Photo by Chase Vialpando/Douglas Budget)

Grace Shaffer receives the Best of the Best award Friday for having the top pole vault mark for girls at the state track meet in Casper. (Photo by Angie Erickson)

Grace Shaffer couldn’t feel her toes as she warmed up Friday morning at the 4A State Track Meet in Casper.

A late spring storm had turned a warm, sunny week into a near-freezing morning as the Cody senior prepared to defend her pole vault state title.

By the time she entered at 11 feet, it had warmed up a bit and her hands weren’t frozen anymore. She cleared that height on her first jump – the height she won at as a freshman, cruising until 12 feet 5 inches.

Already the last vaulter standing, a third state title in hand, she cleared the bar on her third try to set a new state meet record. For good measure, she cleared 12-06.5 on her third attempt as well, and came close at 13 feet, above her PR of 12-09.

“I got pretty close all the times,” she said of the final height. “But by that time I was just too excited, and I couldn’t focus that much.”

Shaffer’s title was one of a number of high points for the Cody track teams at the Thursday-Saturday event at Kelly Walsh High School.

Luke Talich tallied second-place finishes in the 100 meter and long jump, and a third place in the 200, while the Fillies 4x400 relay team of Shaffer, Holly Spiering, Ada Nelson and Lake Harrison finished second, less than three seconds behind winner Cheyenne South. They were seeded sixth going into the event.

“Those 4x4 girls had an unbelievably tough race,” coach Bret Engdahl said. “They gutted it out and ran a really good time in that wind and weather.”

For Shaffer, the meet marked the conclusion of a stellar track and field career. She won an outdoor pole vault title every year she was able to. She finishes high school with three indoor titles as well. She may have had seven total titles, but she didn’t have a chance her junior outdoor season when it was canceled due to COVID-19 restrictions.

“(Track) has been, up to this point, my whole life,” she said. “My dad’s a coach, so ever since I was really little I’d go with him to track practice, so it was really awesome these last four years being able to do what I love with my dad, doing the sport I love.

“I’ll never forget the experiences I’ve had with this track team.”

She’ll leave quite the mark. She crushed the previous state meet record of 12-00, set by Paula Andrie of Campbell County in 2011.

“It means a lot,” Shaffer said. “I came into today not looking to win, just jump higher, but with jumping higher you usually win.

Nelson, a teammate of Shaffer’s and the lone freshman on the 4x400 relay team, said it was fun to be at state and be supported by her teammates.

“Competing for the first time at state was really exciting,” she said. “The spectating crowd was huge and there were tons of athletes from all over, which gave the meet so much energy. Since it was a high level of competition, I had a lot of nerves, but it was really fun competing against athletes I hadn’t seen before.”

It was also Talich’s first high school state meet – he missed his freshman year due to COVID – and the sophomore made the most of it. His long jump matched his PR, but he said he was most pleased with his performance in the 100, when he ran his fastest-ever time of 11.39.

“Coach (Matt) McFadden has been working with me in the blocks all year long, and that race I was the first one out of the blocks, and it all kinda paid off,” he said. “Unfortunately, I wasn’t able to hold on to that lead. But I was still super pleased with where I finished. And it is super cool to be able to race against these guys that are absolute studs from around the state. They only make me better.”

Nicole Wagler also finished fourth in the 100-meter hurdles to cap a successful year. Hers was a unique race, as she was interfered with in the preliminary round when a hurdler knocked a hurdle into her path. So Wagler got a rerun, all alone, to try and make the final.

“It was super neat, her with all that pressure,” Engdahl said. “It’s what we’d hope for from all our athletes, what we’d come to expect from her.”

The Fillies finished 10th and the Broncs 12th in the team results.

Engdahl said despite the huge swing in temperatures – “a typical Wyoming state track meet” – all of the Cody athletes did well.

“I was very thankful we got a chance to compete, the weather was very iffy this morning and we weren’t sure what the day was going to bring as far as vaulting,” she said. “Honestly the biggest thing I’ll take away from this year is my relationships with my teammates and my coaches, they are amazing and I’m going to miss them a lot next year.”

After the top vaulters stood on the podium, she said they then drenched the coach in silly string to celebrate.

Ava Stafford broke into the top-10 with a ninth-place finish in the 800 meter run.

Holly Spiering and Hayley Pearson-Horner finished 7-8 in the long jump, with both getting PR marks.

The Broncs 4x100 relay team of Nic Talich, Brost, Blake Beardall and Luke Talich capped its successful season with a PR and fifth-place finish in a nine-team race.