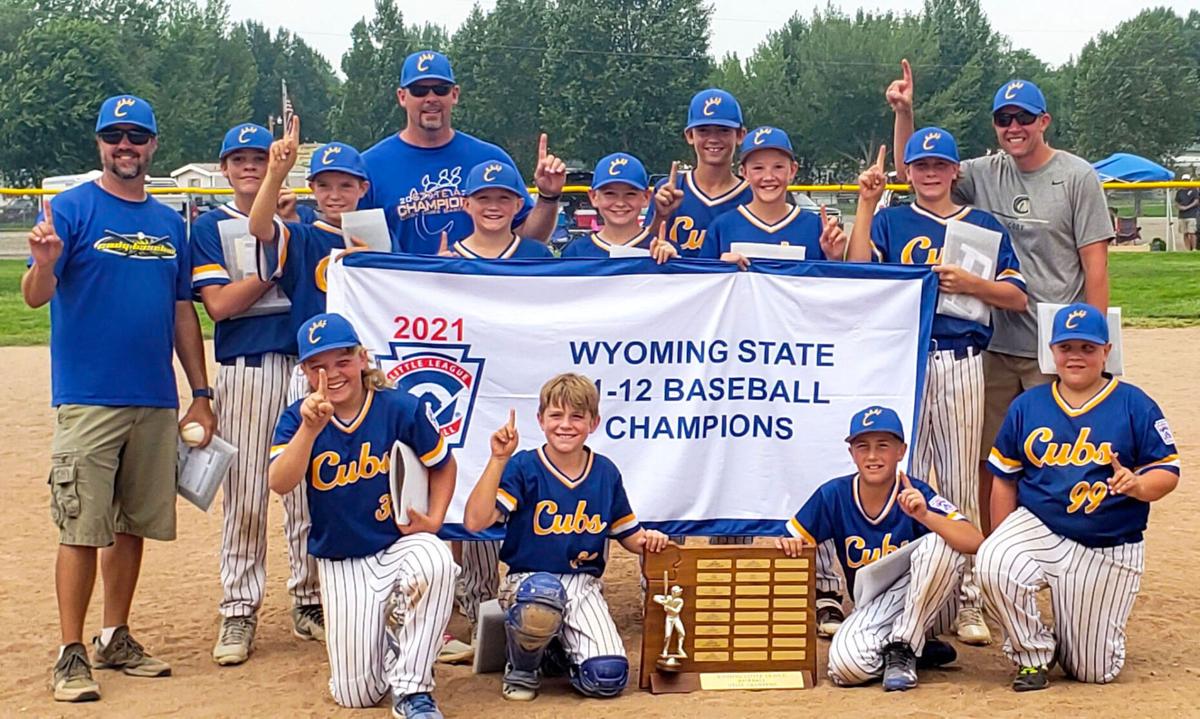 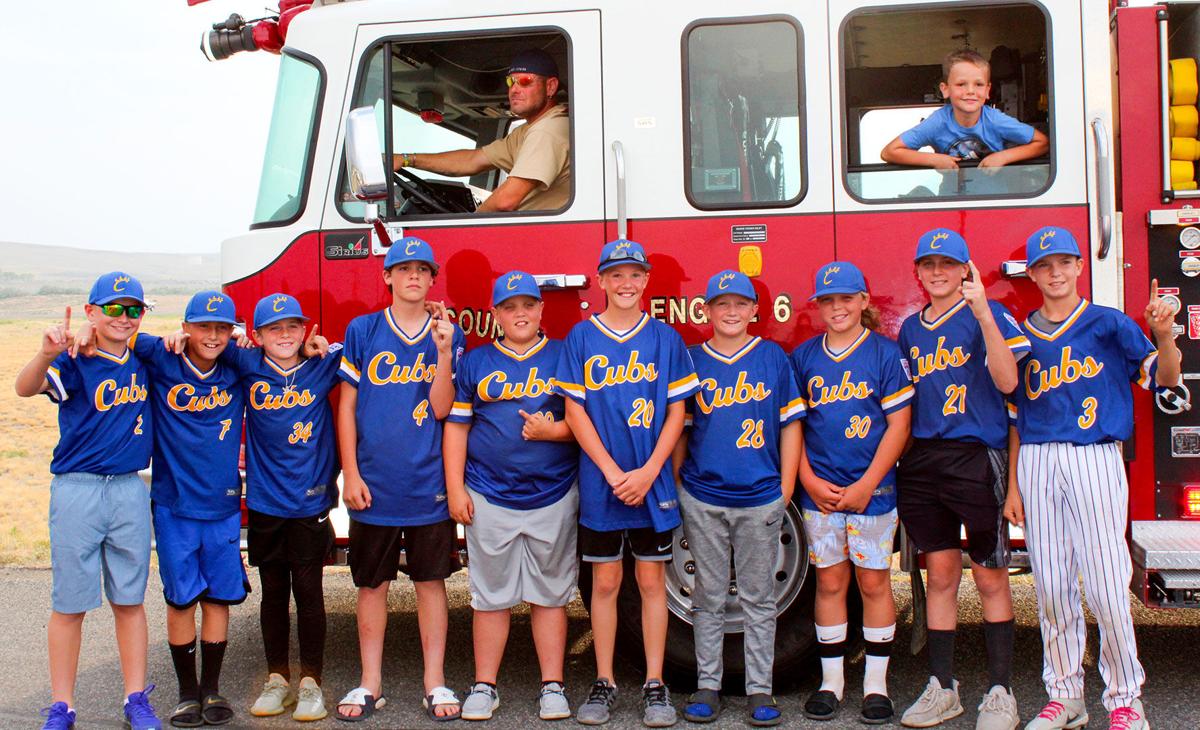 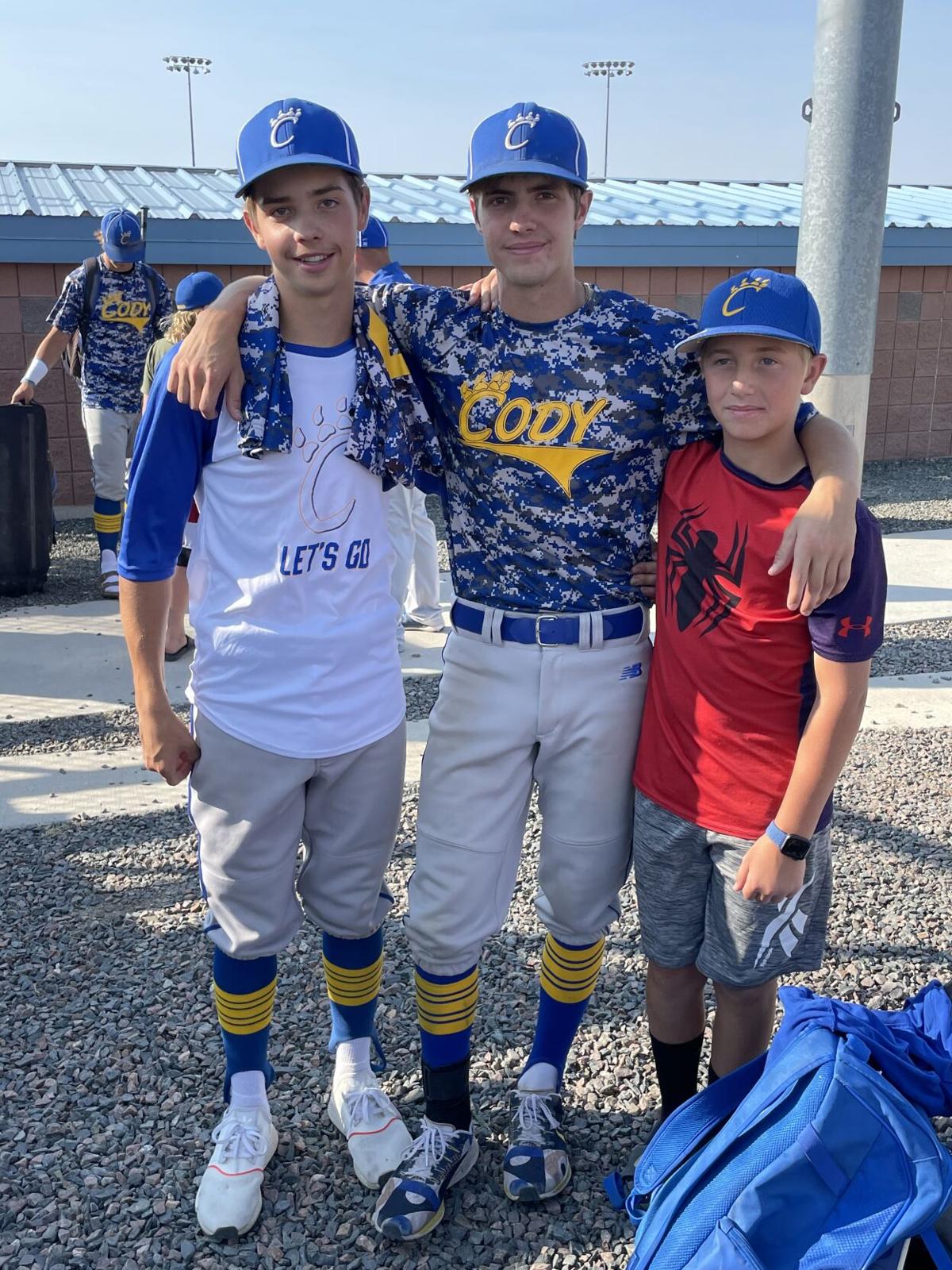 Eli (from left), Ethan and Easton Johnston stand together. All three will be playing in regional baseball tournaments this weekend. 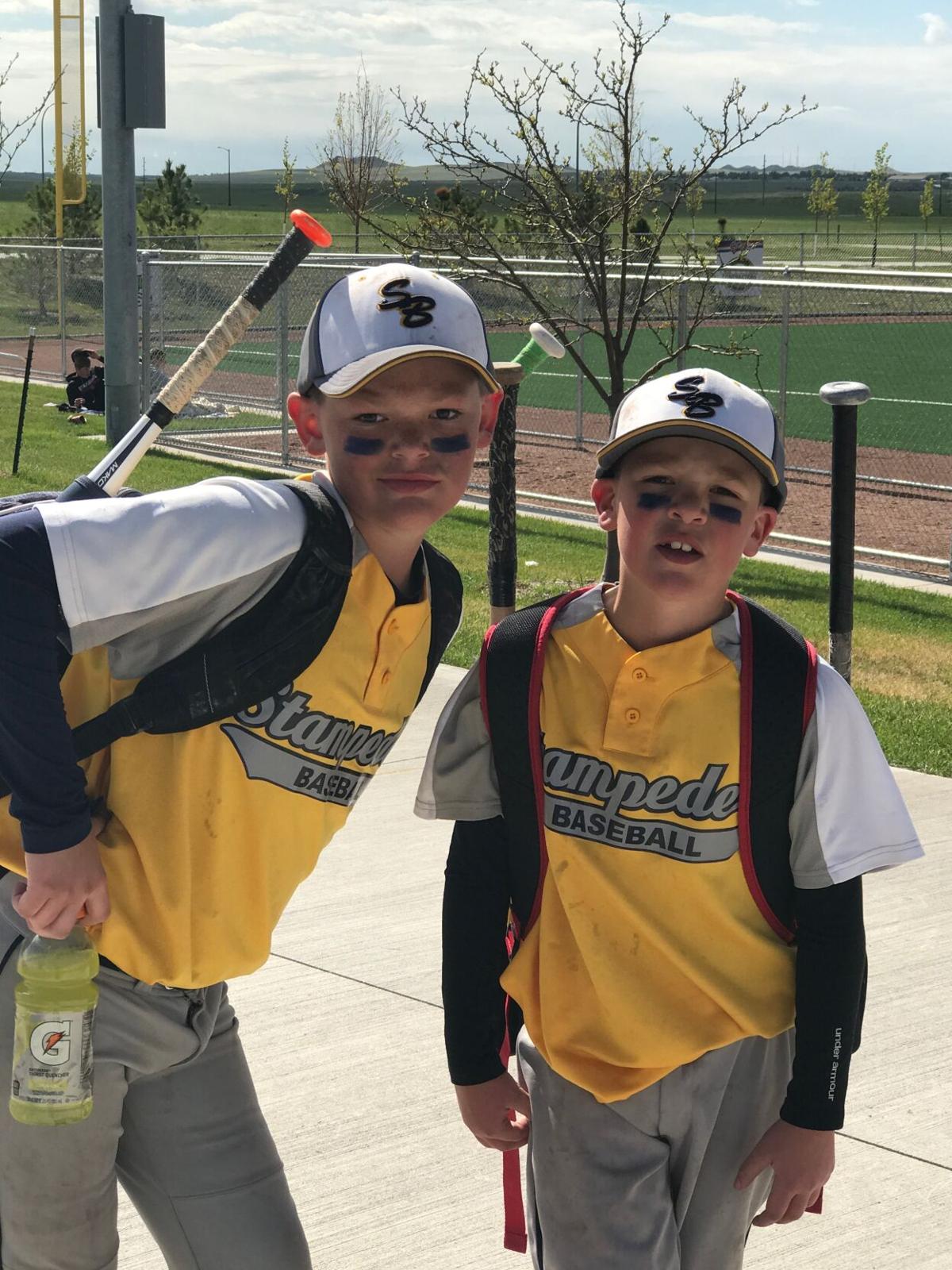 Dominic (left) and Kanin Phillips seen after their only game they've played on the same team in 2017. In that game Dominic hit a home run and then Kanin came up next and swatted a triple. 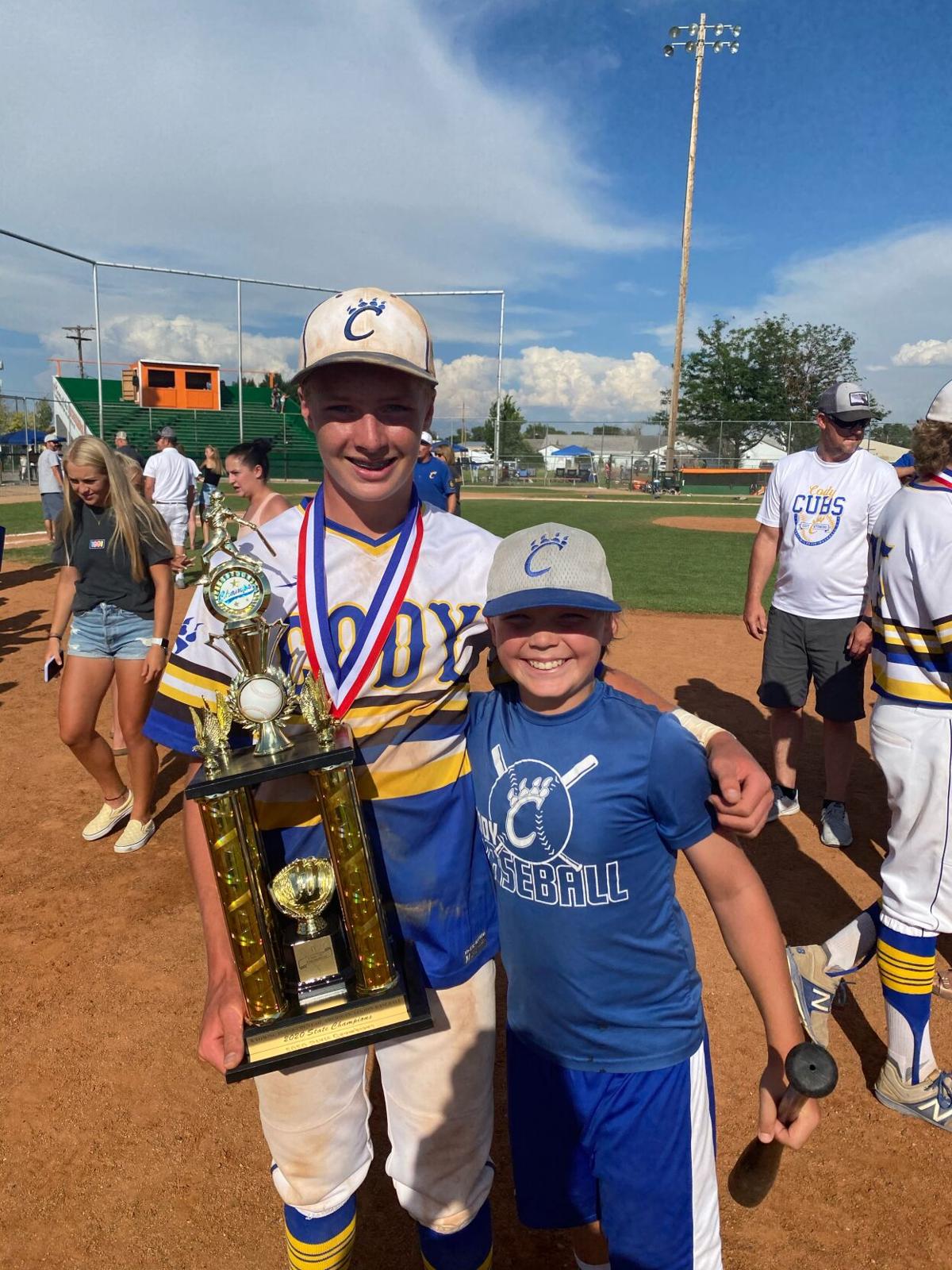 Eli (from left), Ethan and Easton Johnston stand together. All three will be playing in regional baseball tournaments this weekend.

Dominic (left) and Kanin Phillips seen after their only game they've played on the same team in 2017. In that game Dominic hit a home run and then Kanin came up next and swatted a triple.

Coach Jeremiah Johnston said the players were initially excited after their state win, but then reality set in that they had achieved something bigger.

“When they realized the California regionals would be on the horizon, they were really excited about it then,” Johnston said.

Cody beat Laramie 14-1 to win the championship behind stellar pitching from Easton Hartley who threw a complete game effort, only allowing four hits, throwing three strikeouts and walking one. The game was called in the fifth inning due to the mercy rule.

“It was pretty cool actually,” Hartley said, mentioning that he never gets nervous on the mound.

The Cubs play with a modest confidence, with all the players sharing in the glory equally.

“Pretty much everybody played good (at state),” said Easton Johnston.

Cody went into the championship undefeated but lost its first game of the day on Saturday to Laramie 7-4 due to a late Laramie comeback. Cache McFadden was pitching well early on, but reached the maximum number of allowable pitches, and Laramie managed a few hits off the reliever.

Easton Johnston said there wasn’t much concern among the team entering the final elimination game.

“We just didn’t hang our heads and we kept on fighting,” he said.

Cody started the tournament with a 12-1 win over Gillette behind solid pitching from Kanin Phillips. They followed that up with a 7-5 win over Laramie that qualified them for the championship games.

It was the first Majors state championship for Cody since 2014 and eighth overall in town history. The Cubs beat Green River 12-2 for their District 1 championship on July 23.

Now, the Cubs will head to the Little League Northwest Regional tournament in San Bernardino, Calif.

Cody will face some stiff competition with teams from Washington, Oregon, Alaska and Billings also on the field of play. Realistically, winning any game at the tournament will be an achievement for the team. No Wyoming team has won a game at regionals since 2011.

“I think we might be able to beat a team,” Hartley said.

Their first game will be at 5 p.m. Sunday against West Valley Little League of Eagle, Idaho, and broadcast live on ESPN+. If they win, they will play against Billings at 5 p.m. Monday, and if they lose they will play a to-be-determined opponent at 10 a.m. Tuesday. The regional tournament will wrap up with the championship on Aug. 14, and every game will be broadcast on ESPN streaming services.

If the Cubs can win the region, they will punch their ticket to the Little League World Series in Williamsport, Pa., a feat no Wyoming team has ever accomplished.

Coach Johnston’s older son Ethan was a member of the 2013 and 2014 Cody squads that made it to regionals. Ethan is now a member of the Cody Cubs American Legion baseball team that just qualified for the Northwest Class A Regional Championship in Alaska, as is the middle Johnston sibling Eli. Including the Johnstons, Phillips and his older brother Dominic, and Griffin McCarten and his older brother Grady McCarten make up the three pairs of Cody brothers playing in regional baseball tournaments this weekend.

Those interested in donating towards the team’s travel expenses may contact Julie Stevenson at (307) 250-0859. Checks must be made out to Cody Little League.

This team is known for their kindness and great attitudes. Way to go boys!! I can't wait to watch you play in California (especially #34)!!