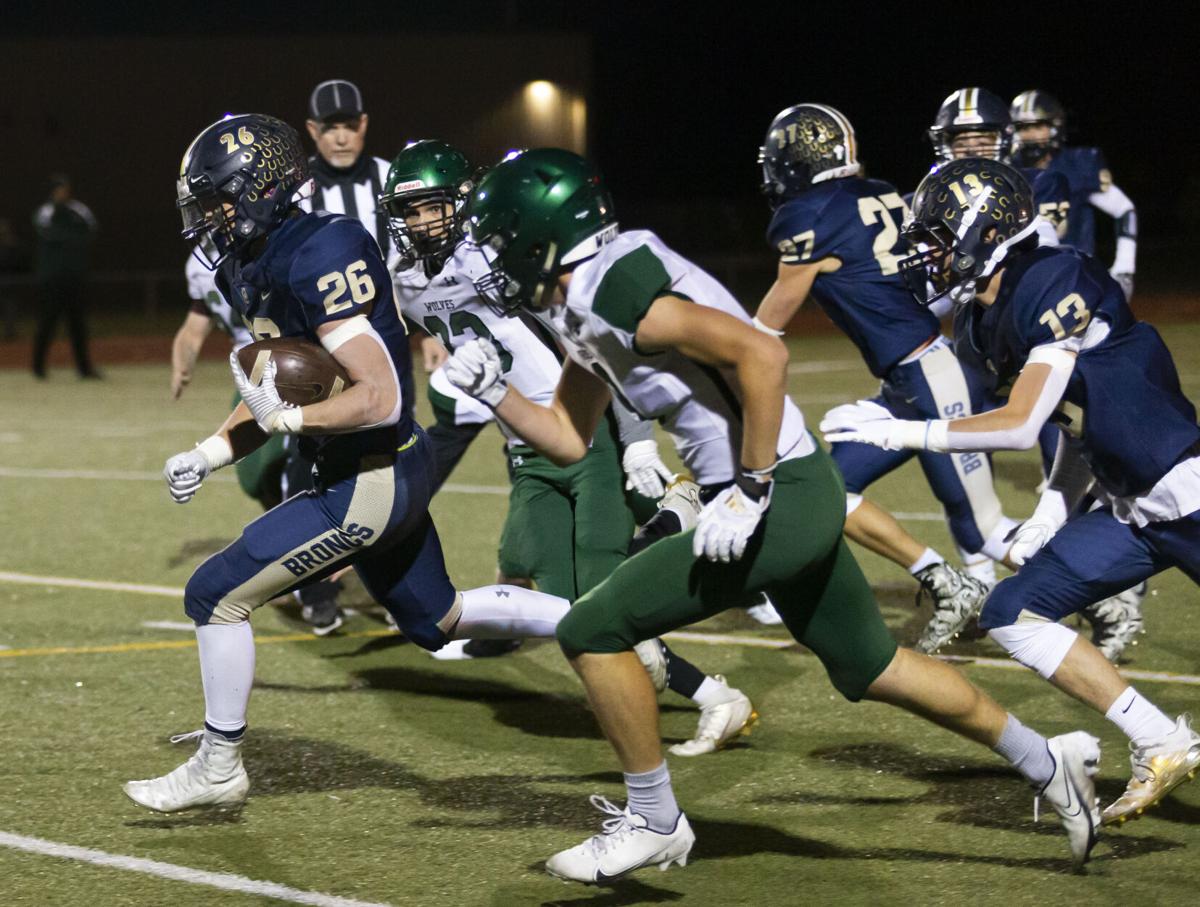 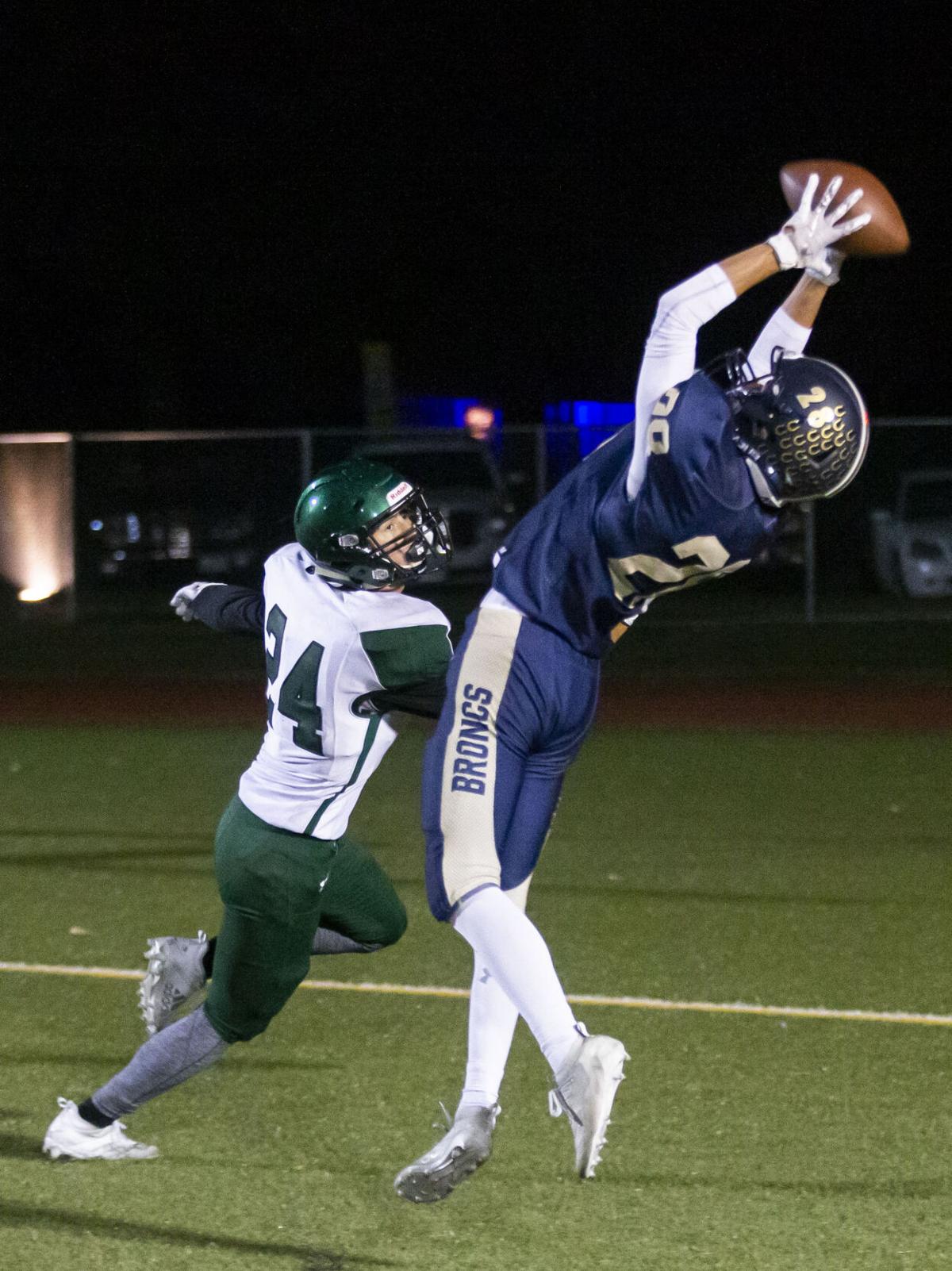 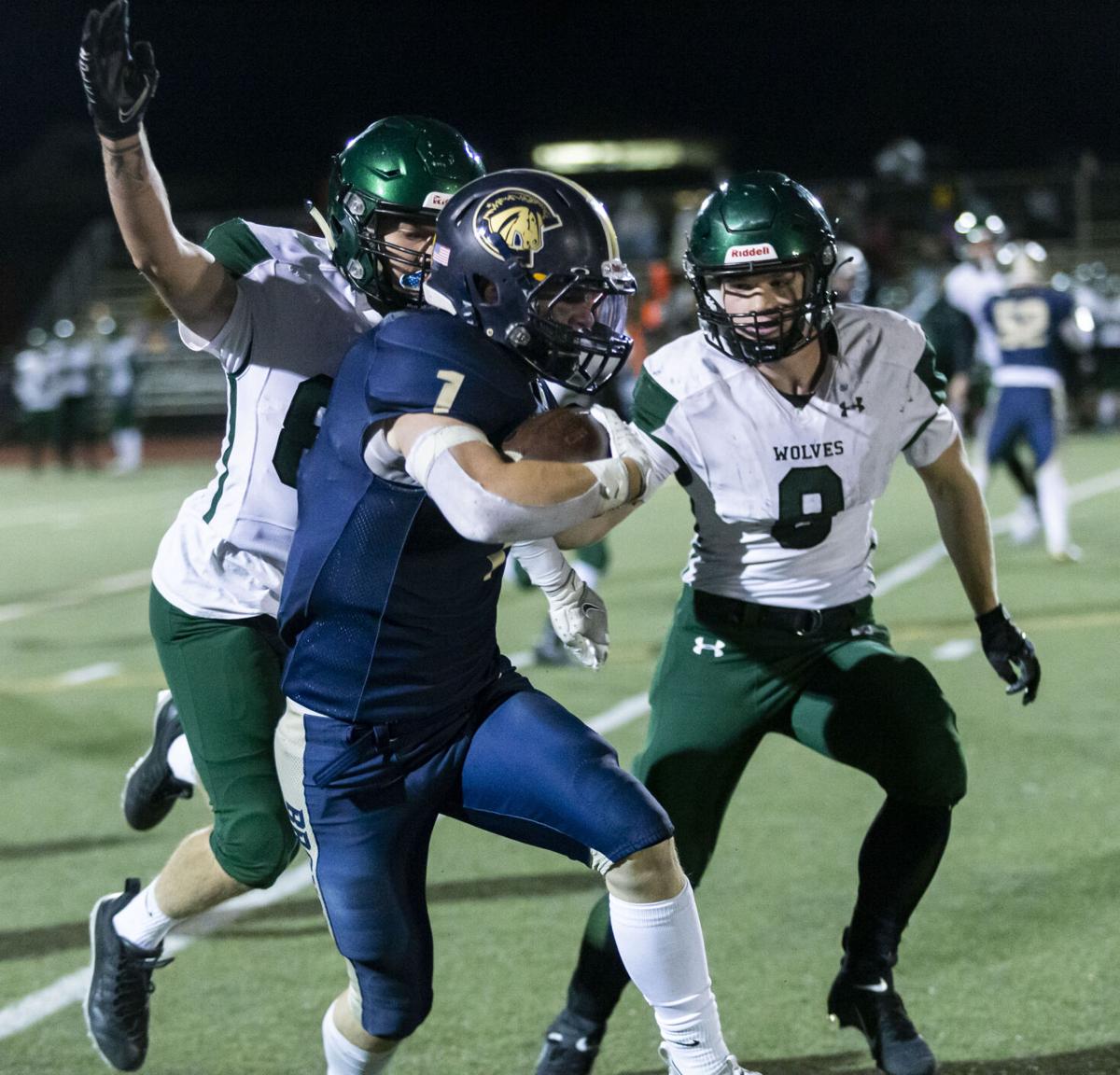 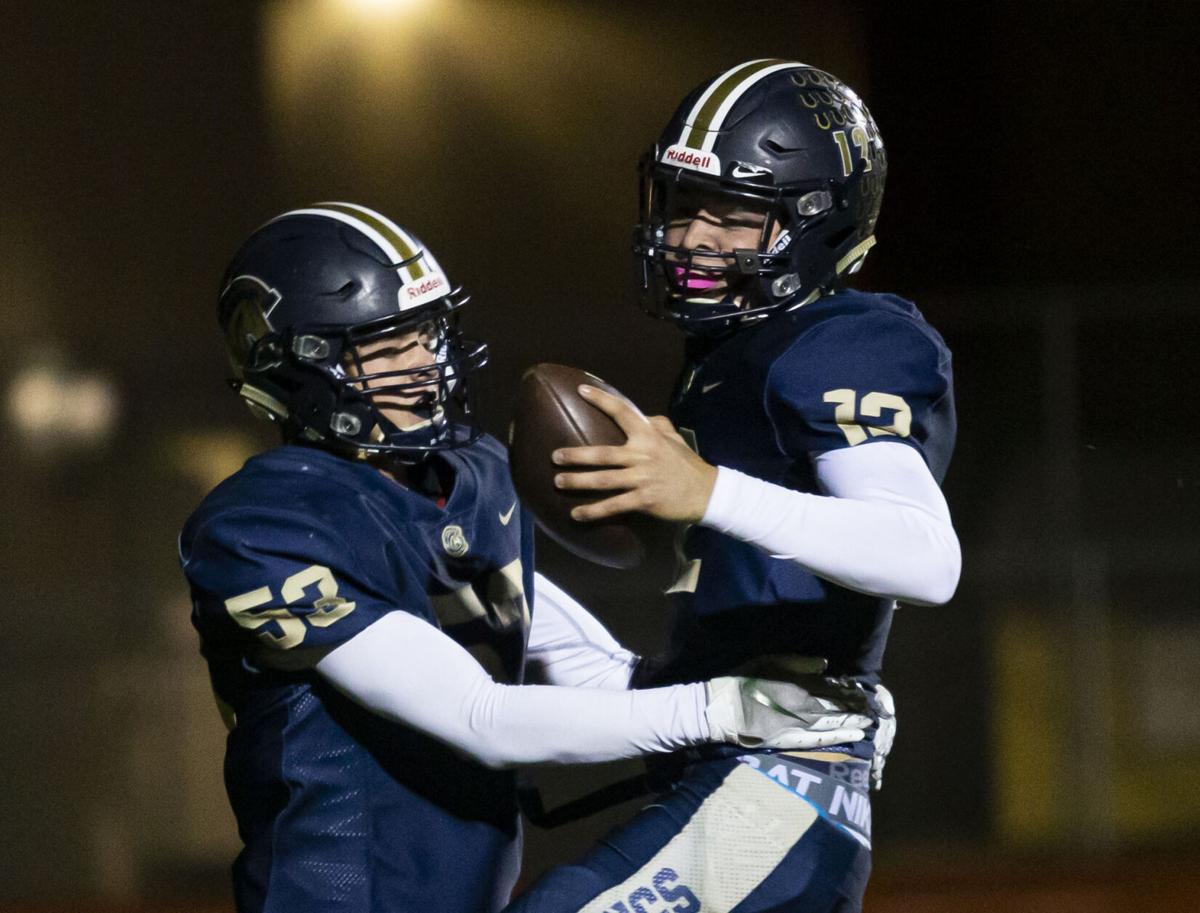 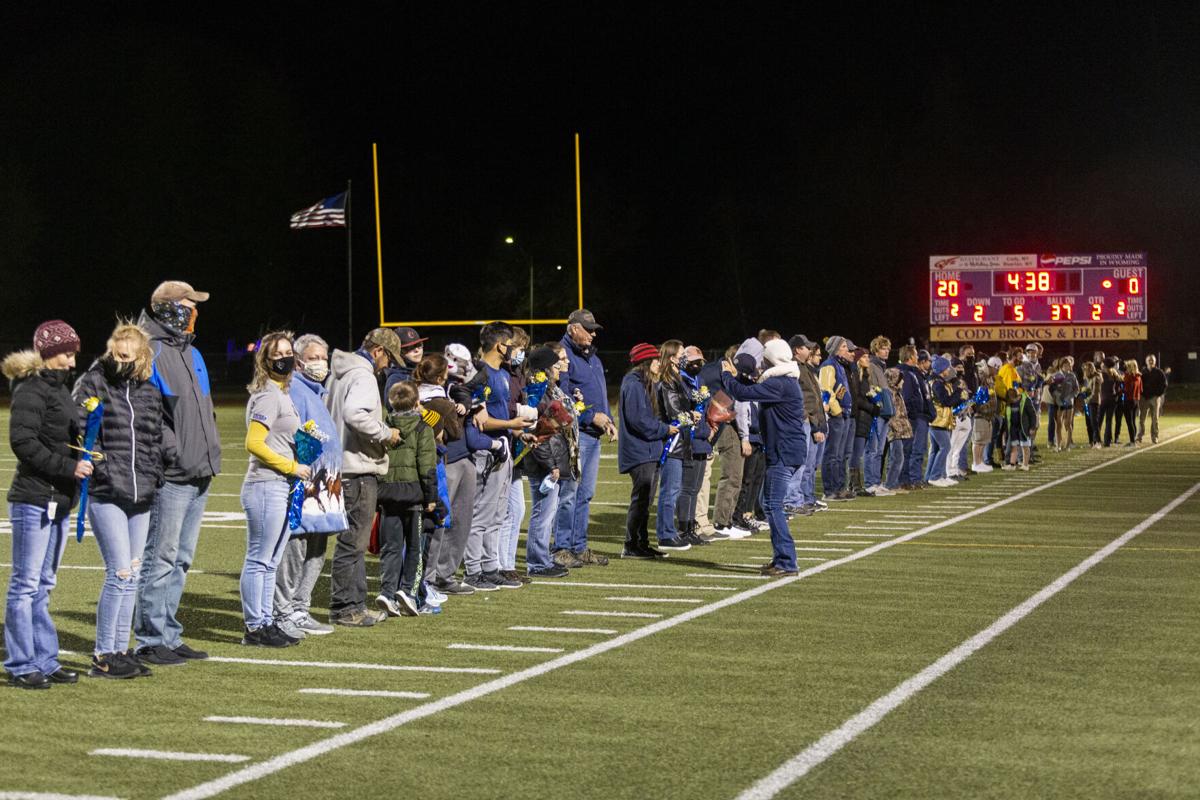 Golf, cross country and band seniors are honored during halftime on Friday. 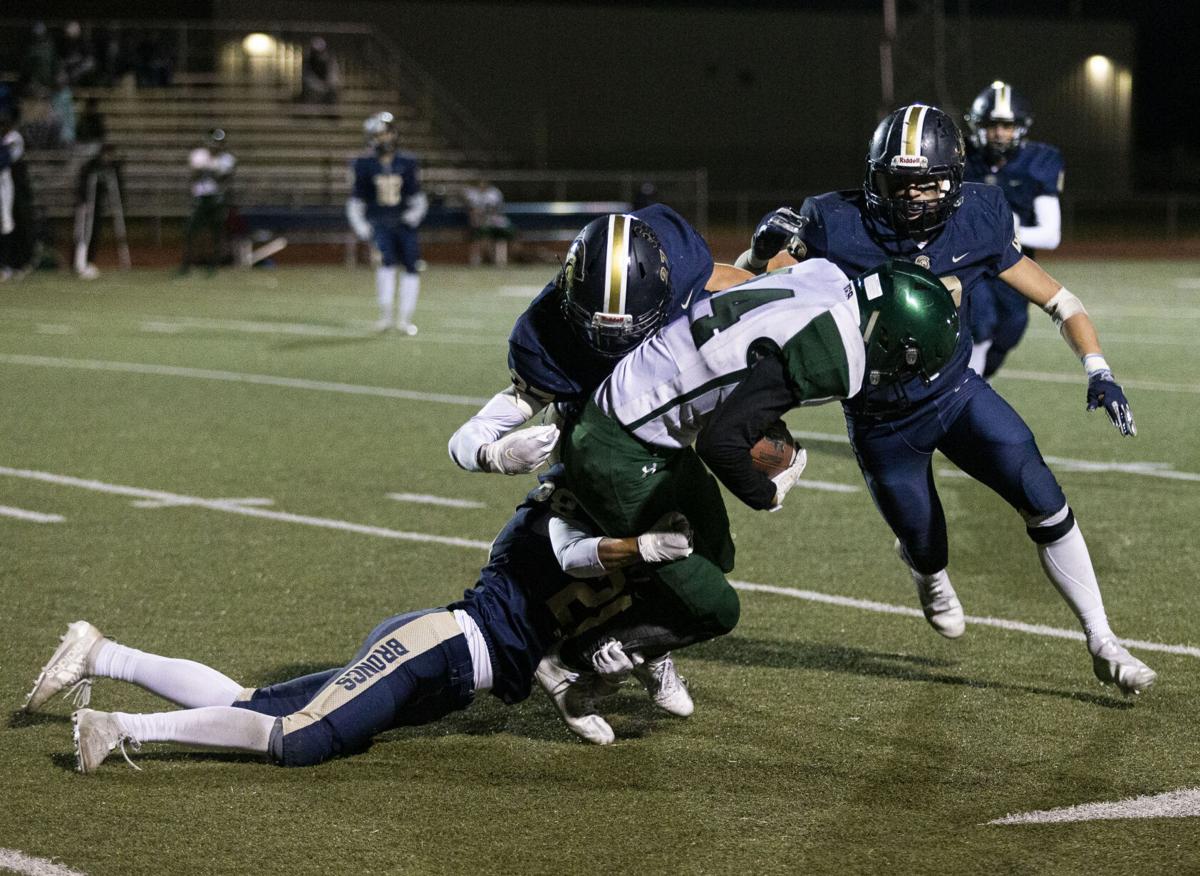 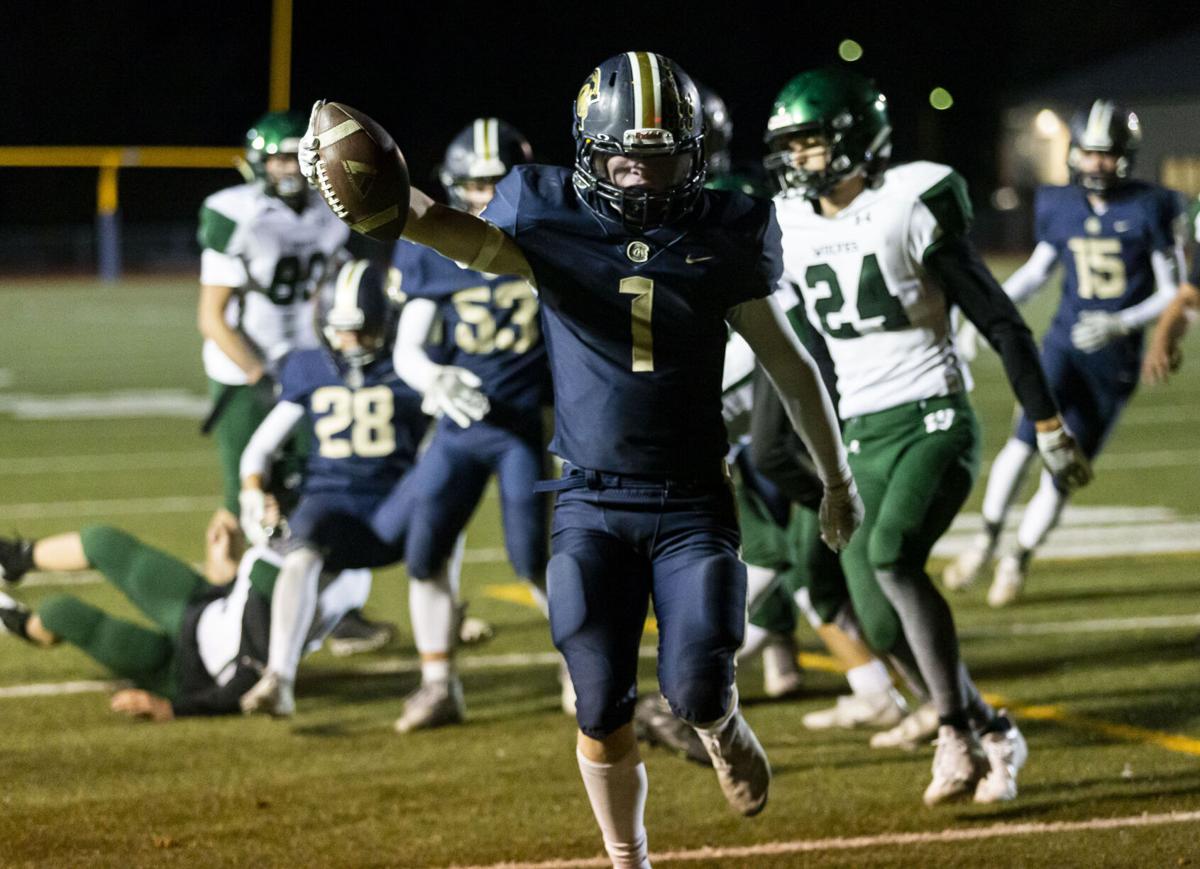 Golf, cross country and band seniors are honored during halftime on Friday.

The No. 3 Cody football team returned to its winning ways with a 40-0 defeat of Green River in its regular-season home finale on Friday.

“The win after last week felt great, it was what we needed,” Remy Broussard said.

Nic Talich and Cody Phillips had two touchdowns apiece while Broussard chipped in a score, interception, sack and 110 total yards.

The Broncs (6-1) slowly added to their lead throughout the night and the defense hardly gave an inch to the Wolves (2-5).

“Our defense stepped up a lot tonight,” Talich said. “We definitely had an improvement since last week.”

Talich, who finished with 78 total yards on 12 carries, delivered a number of huge blocks and seven tackles in addition to his offensive exploits. He said it’s these types of plays that he loves most about football.

“Just wanted to be just like him, it’s a dream come true,” Talich said.

Broussard got the Broncs started at 5:15 in the first with an 11-yard rushing score. He showed great patience on the play, waiting for a hole to develop before exploding through. The score capped off a seven-play, 50-yard drive.

“They were blocking their butts off,” Broussard said. “That made it so easy, my lanes were open all night.”

Talich added to the lead with 15.6 seconds left in the first with a 7-yard rush of his own. First cutting right, then left, Talich rumbled across the end zone with a defender on his back. The Broncs went 47 yards in eight plays on the drive.

Quarterback Caleb Pryor fumbled the ball when sacked at 9:37 in the second, but the Broncs got a big stop at their own 11-yard line and eventually forced a fourth-and-out.

On the next possession, a Jack Schroeder 47-yard rush set the Broncs up deep in Green River territory. A few plays later, Phillips took home a rush from four yards out to give the Broncs a three-score lead. After a missed PAT it was 20-0.

The Broncs had 218 total yards at the half. Schroeder led the team with 66 yards on four carries while Broussard had 51 yards on six carries.

Cody had a little trouble getting started again in the third with a Talich fumble, but a Broussard interception at 5:55 in the third seemed to reinvigorate the team.

A Jackson Gail 35-yard reception brought Cody deep into the red zone, which led to Pryor scoring on a 14-yard sneak at 3:52 to make it 27-0.

The Broncs kept rolling in the fourth.

After a Talich touchdown was called back because of a penalty, the Broncs ran the exact same play to Talich on the next snap, in which he took home a 20-yard rush around the corner at 8:48 in the fourth. After a missed PAT it was 33-0.

Cody had its way with the Green River defense late in the game. Broussard scampered off 39 yards on three carries in a single drive.

“He’s still a baby but a big, strong baby,” coach Matt McFadden said of the sophomore.

After a limited start to the season Broussard has come on strong as of late, earning significant playing time in the last two games.

“Understanding mentally is the biggest thing with those sophomores,” McFadden said.

Phillips, who finished with 97 total yards, scored his second touchdown on a 7-yard rush with 3:53 left to make it 40-0.

William Thomasson finished out the action when he got his first career interception at 1:40 that he returned 17 yards.

“I was pleased with all three levels,” McFadden said. “The kids did a good job executing.”

The Broncs held Green River to 121 total yards. It was the fourth time this season the Broncs defense has held their opponents to six points or less and their second shutout.

Cody finished with a season-high 483 total yards in the game, of which 378 yards came on the ground.

The Broncs did commit five fumbles and eight penalties for 70 yards.

“I think our ball security is not very good,” Talich said. “We just need to do better on that.”

The Broncs were pleased but not overjoyed following their win. They know there is still work to be done.

Cody will finish out the regular season with a tough road test against No. 1 Jackson (7-1) on Friday.

Playoff seeds are still up in the air, but Cody controls its own destiny, as a win will give them the No. 1 seed in the West and home-field advantage throughout the entire playoffs including the championship game.

The Broncs could fall as low as the No. 3 seed as well, but under most scenarios a loss against Jackson would likely put them in the No. 2 spot.

“It’s just another game and if we execute I think we’ll be all right,” Talich said.