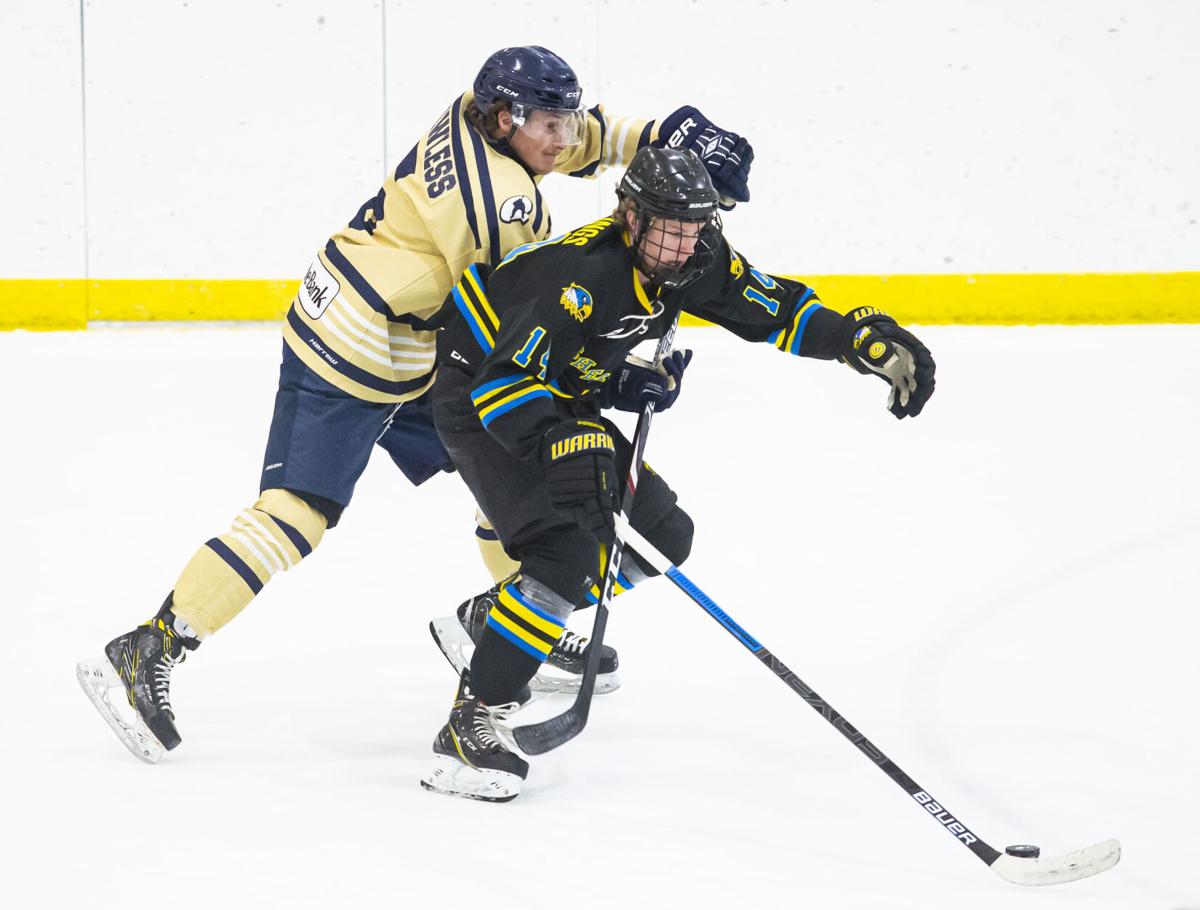 Austin Lawless goes after the puck against Sheridan’s Blake Billings on December 31st. 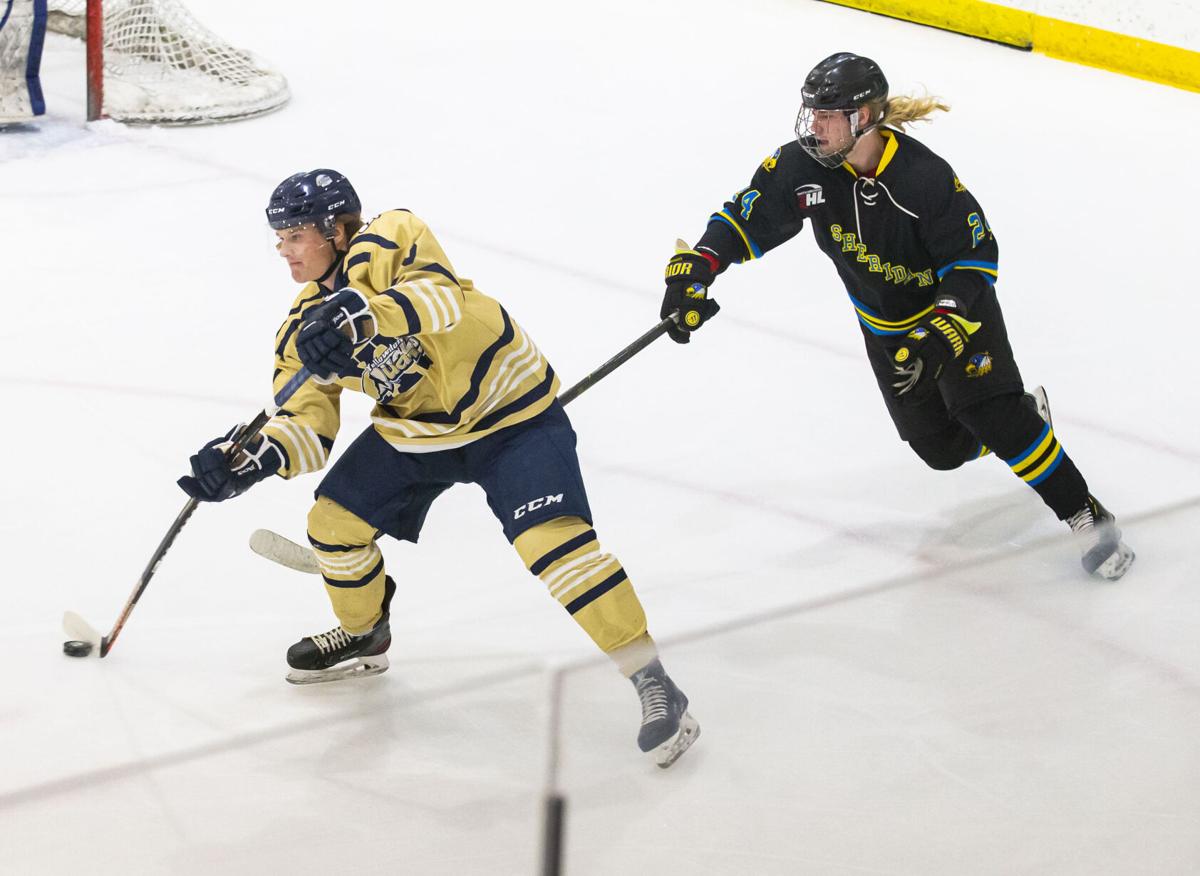 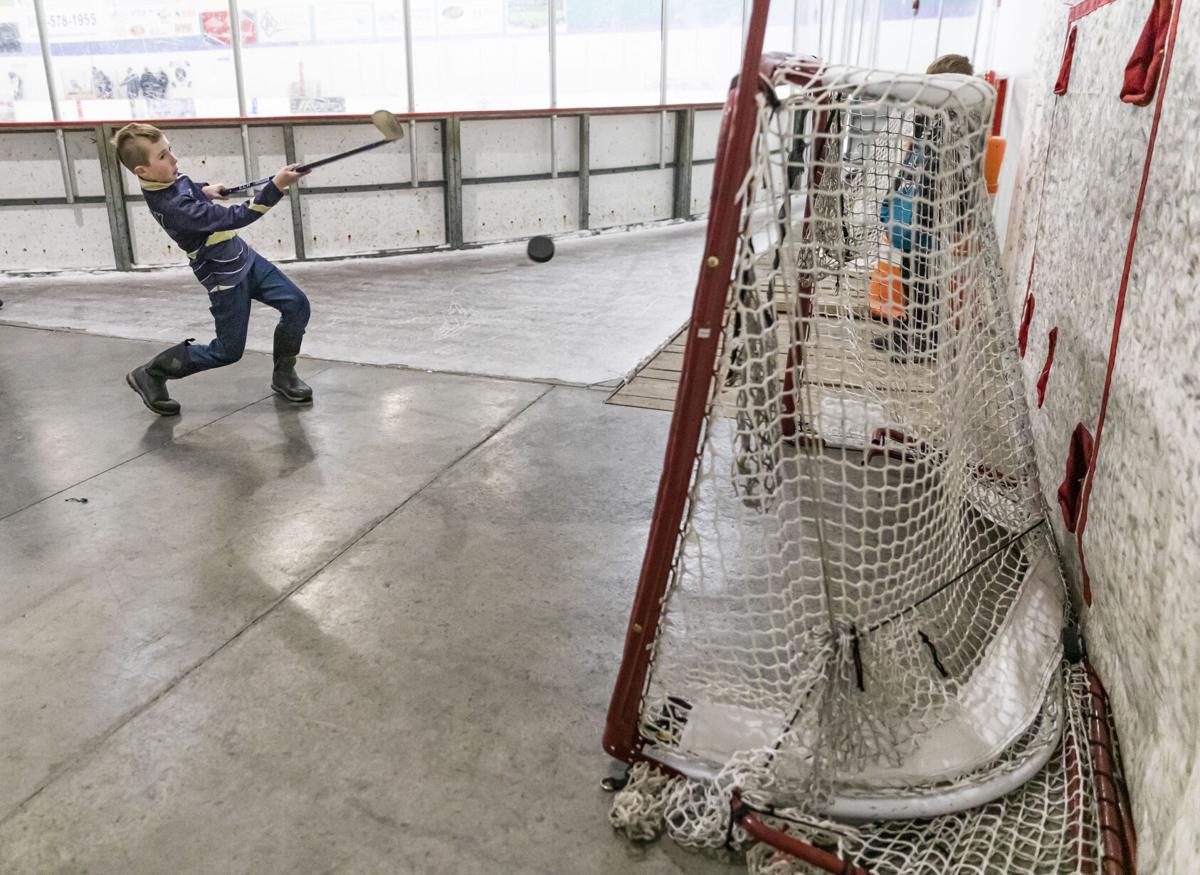 Gunner Droll, 9, shoots a puck during the Quake game on New Year’s Eve at Riley Arena. 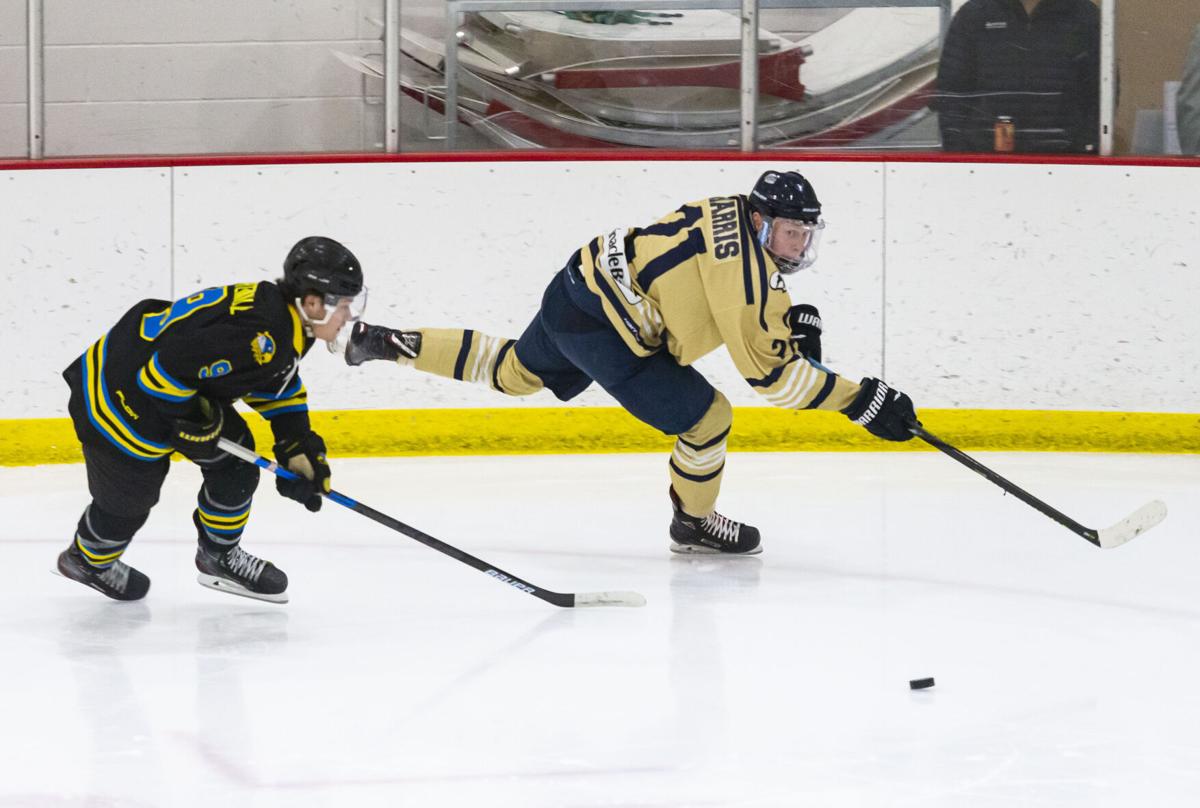 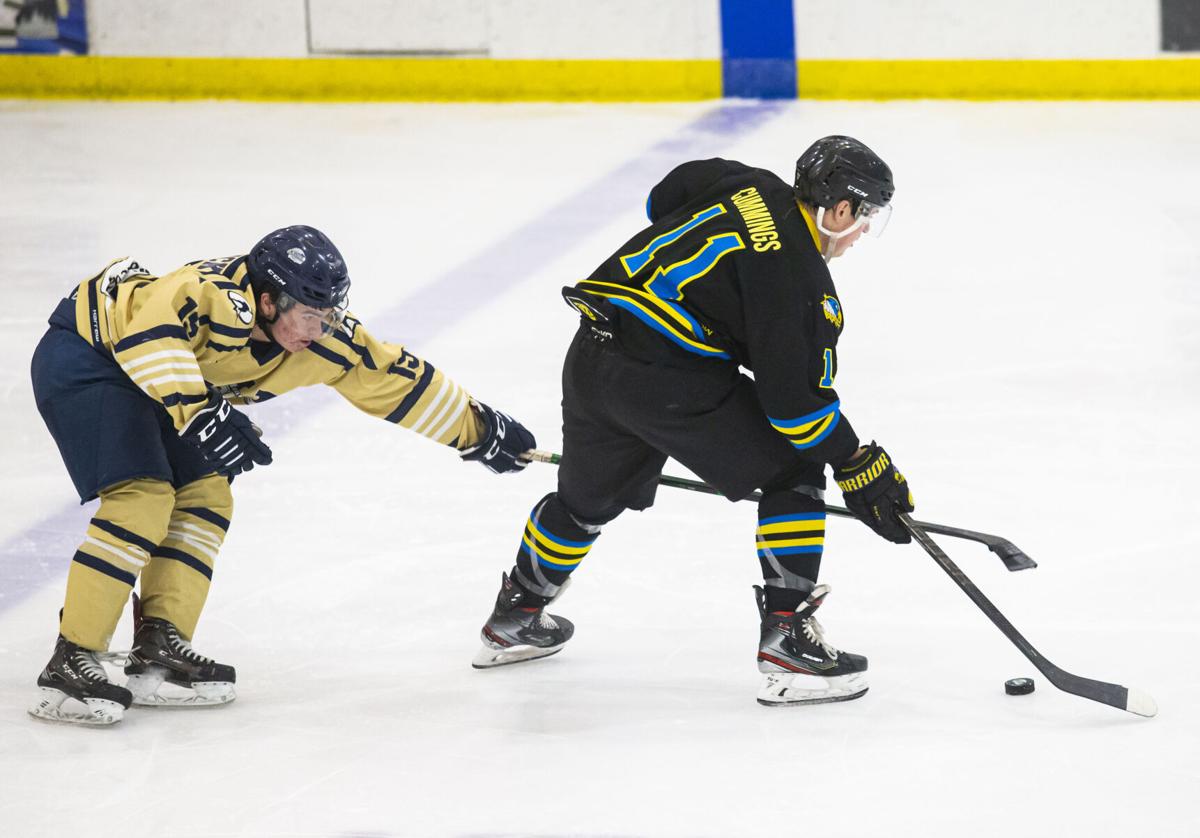 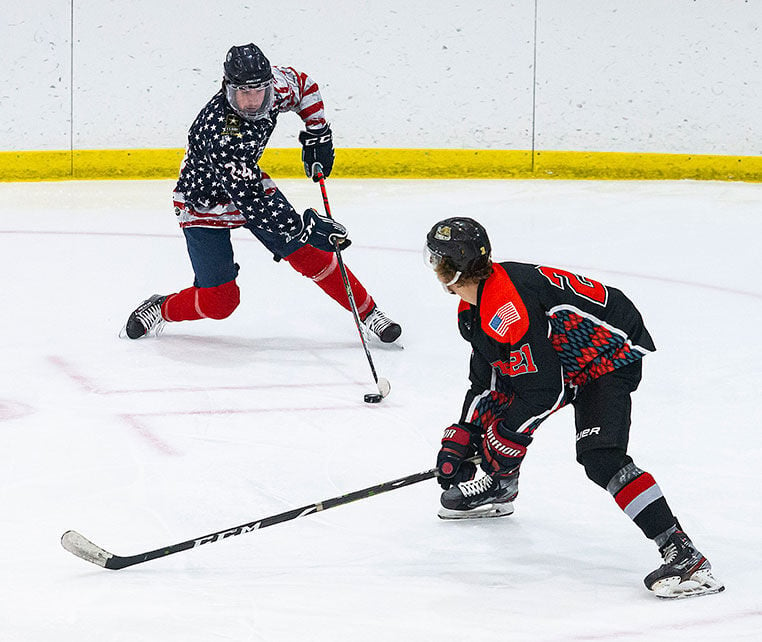 Jack Luttringer shoots for the Quake on Nov. 22. He had one goal in the 9-5 Quake loss to Sheridan Thursday night.

Austin Lawless goes after the puck against Sheridan’s Blake Billings on December 31st.

Gunner Droll, 9, shoots a puck during the Quake game on New Year’s Eve at Riley Arena.

Jack Luttringer shoots for the Quake on Nov. 22. He had one goal in the 9-5 Quake loss to Sheridan Thursday night.

After a tough first half to the season the Yellowstone Quake took a 12-day break and started the new year on the right foot, winning two straight against the Bozeman Icedogs in a home-and-home series last week.

“It was good everyone got a break to relax and really enjoy that time,” goalie Hudgel Selk said. “Once we got together after the break everyone looked a lot more relaxed.”

On Saturday, the Quake beat Bozeman 5-3 on the road behind two goals each from Dylan Rumpke and Joe McCormick. Cade Rosansky chipped in three assists.

Selk had a great night in goal and his best performance of the season as well, making 50 total saves and 24 in the third period alone.

“My good performance comes from the guys in front of me,” Selk said. “Everyone committed to blocking shots and selling out defensively, especially on our penalty kill.”

The Quake took advantage of their opportunities on Saturday, scoring four of their five goals on the power play.

“We played pretty well on special teams,” coach Phil Oberlin said. “There was a lack of discipline on their side we took advantage of.”

Rosansky started the play skating into the offensive zone and faking out his defender. He then passed to Will Sobaski through an opening, who fed McCormick with the puck.

“The defenseman just got his stick on it but I was still able to get it in,” McCormick said.

A Bozeman (9-9-1) rally did come when the Quake got into penalty trouble in the third, but it was too little, too late as the Quake defense and Selk held the line.

On Friday, the Quake beat Bozeman 5-2 at Riley Arena.

Rumpke and Jack Harris each had two goals and two assists in this game.

The game was back and forth throughout but the Quake never trailed.

A Harris goal late in the second gave the Quake a 3-2 lead they used for their final push. He and Rumpke both added scores in the third to give their team some extra breathing room.

“I think we’re defensively coming together,” McCormick said. “It’s a lot easier to win games where we’re allowing 2-3 goals, versus 5-plus.”

Connor Carroll made 35 saves in net.

“All of our goalies played extremely well over the weekend,” Oberlin said.

The Quake took a 9-5 loss to the Sheridan Hawks in their annual New Year’s Eve game on Thursday at Riley Arena.

After falling behind to start, the Quake rallied with four unanswered goals to make it 4-4 early in the third period.

At 11:27 in the third, penalties from Mason Merager and Harris gave Sheridan a 5-on-3 advantage. Just seven seconds later the Hawks (17-1) made it 5-4. Sheridan used this momentum for three more unanswered goals, putting the game out of reach at 2:08 when they made it 8-4.

The Quake had five different goal scorers as Rumpke, Jack Luttringer, Harris, Vincent Anderson and McCormick all found the net.

“I think for us to be able to play with one of the top teams in the league is definitely a confidence boost,” McCormick said.

Yellowstone was outshot 62-38 in the game but did have a solid second period, outshooting the Hawks 19-11 in that frame and scoring the period’s only goal.

Oberlin said he thought the team was starting to play well even before the Christmas break, though the results weren’t showing on the scoreboard. Now, he is hoping they can jump start a second half turnaround similar to last year’s run that saw the team earn home ice in the playoffs and a first round sweep, after a rough start to that season.

“That break is a good one to get because in the beginning the end seems so far away for these players, but after they come back they can see the end in sight and realize the playoffs are right there.”

The Quake return to action 11 a.m. Tuesday against Helena (6-13) at Riley Arena.