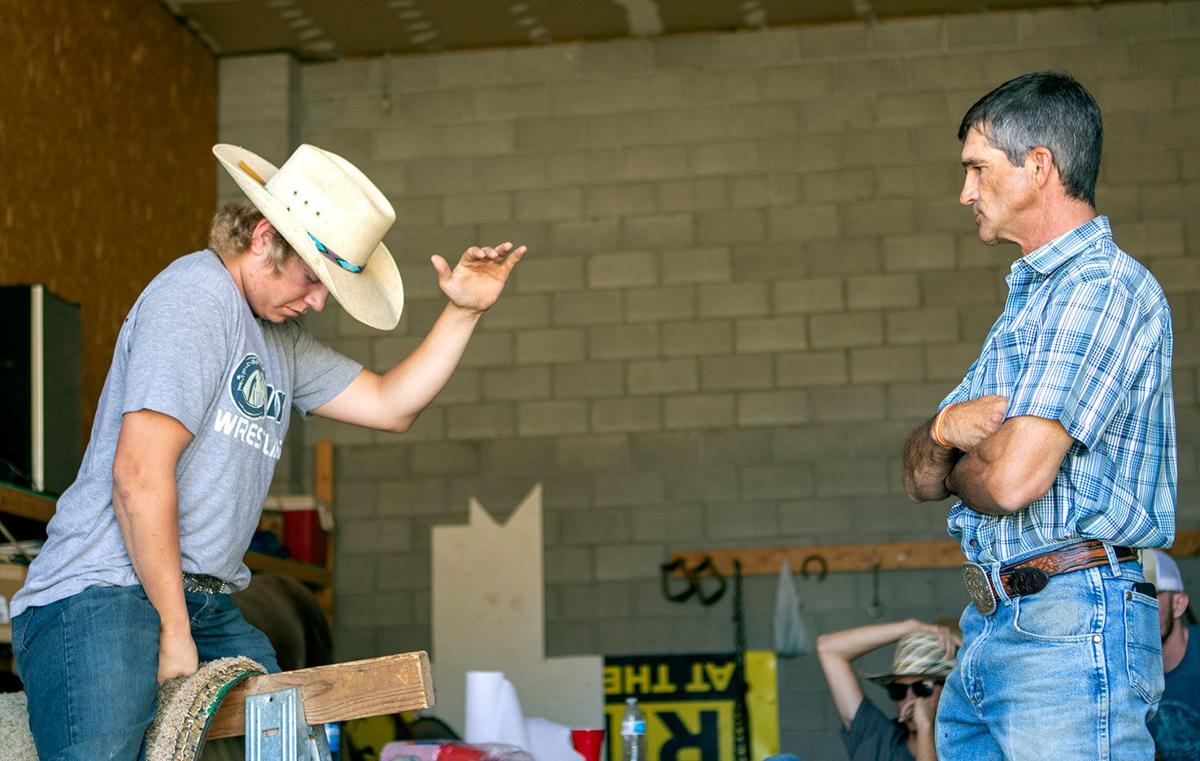 Brent Lewis speaks to his calf roping class before the students get on their horses.

Brent Lewis speaks to his calf roping class before the students get on their horses.

Dust flies as a four-wheeler races through the W Arena, towing a dummy calf while students of 12-time National Finals Rodeo qualifier Brent Lewis race behind it on horseback, trying to land a rope around its neck.

Faster. Slower. Faster. Slower. Age and skill determine how fast the ATV goes. One rope gets too much. It pulls the dummy off its sled, and there’s a lull as it’s reset. The ropers came from all over the country to learn from Lewis, and this is the final day of classes.

Last week was one of the busiest all summer for schools at the rodeo grounds. Four groups – bull riders, bullfighters, ropers and bronc riders – were all getting the chance to learn from some of the best in the world at their event.

In another class, youth climb on a sawhorse with a carpeted barrel wrapped around it. They show their form to Cody Custer, 1992 World Champion bull rider. Small adjustments are made. A bend in the elbow here. A change in riding angle there. The tiniest details make all the difference, and those details are all about the fundamentals.

Bullfighter Dusty Tuckness runs his students through workouts. He pulls out a training aid built like a wheelbarrow. It simulates the motions of a bull for these young bullfighters who will be protecting the riders at the Cody Nite Rodeo that evening. They work on their form, their reaction time.

Three of the classes are free for the students. Ropers have to pay a fee, but the PRCA and the Cowboy Church help with lodging.

“I think it’s huge,” said Maury Tate, the stock contractor for the Nite Rodeo, of being able to offer these schools. “Not only from the technique and the fundamentals and the basics but being around a world champion, being around people who are successful. It’ll help those kids not only in the arena but the kids who don’t rodeo. It’ll help them in life.”

They come from all over the country. California, Texas, Florida, Wisconsin. The chance to learn from the best in the world is a huge draw, and they get the chance to compete in the Nite Rodeo and apply their new skills while in town.

Hunter Green jumps on the sawhorse. Custer watches as his student gets in position and rocks back and forth, mimicking the motion of a bucking bull. Custer pulls Green’s arm, demonstrating how a change of angle even a few degrees gives riders more strength as a bull twists and turns, helping them keep their balance.

Green has Asperger Syndrome, part of the autism spectrum. After picking up rodeo while at a Missouri boarding school for troubled teens, he wants to prove anyone can be successful on the back of a bull.

“I’m trying to show that kids with autism can actually do rodeo just the same as anybody else,” he said. “My goal is to win a world title.”

He’s taking what he learned from Custer back to his rodeo circuit in Texas.

Each class involves some practical work – on the sawhorse, in the arena or on horseback, depending on the class – and film study. Each student gets individual time with each instructor, something they think is really important.

“In my schools, I don’t take big numbers of people because otherwise I don’t feel like I get the hands-on and get to know them,” Lewis said.

After each rider roped inside the W Arena, Lewis pulled them aside to chat about what had just happened.

The personal instruction the students of these schools receive is part of building the rodeo family, giving them a coach for life.

“It’s the equivalent of Tom Brady coming down and working with the quarterbacks at the local high school,” Tate said. “To be able to call up Tom Brady and find out what they’re doing wrong, that’s a huge advantage.”

On the night of July 16 there was no shortage of students competing in the Nite Rodeo. Lewis made a run in team roping. Custer stood behind the chutes and watched Owen Monfeldt take on a junior bull. Tuckness showed off his quickness even in blue jeans, nearly getting run over by a charging bull.

One of his students, Dillon Krigbaum, tapped a bull between the eyes, distracting it from a fallen rider. He wanted it to charge. Just another day in summer school.