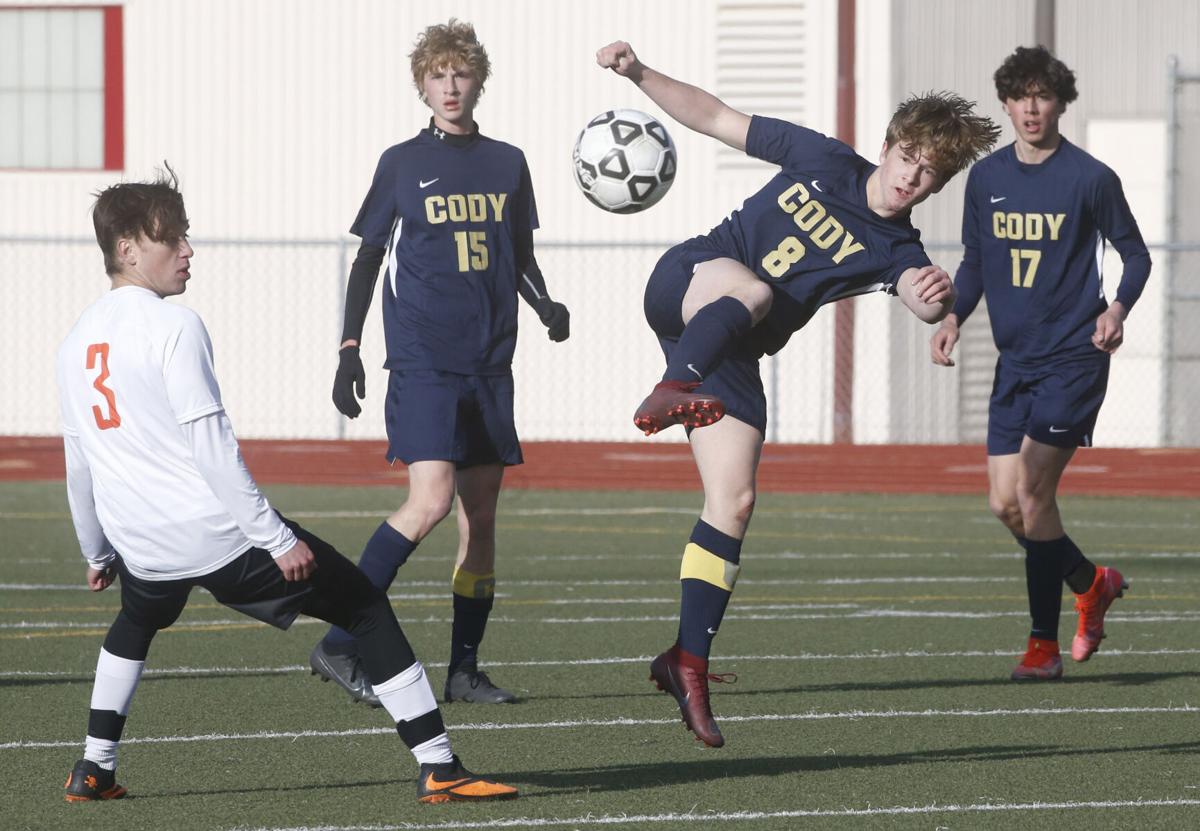 Reese Ward clears the ball past Jack Pool of Powell as Tucker Lynn (15) and Remy Broussard (17) look on Tuesday. 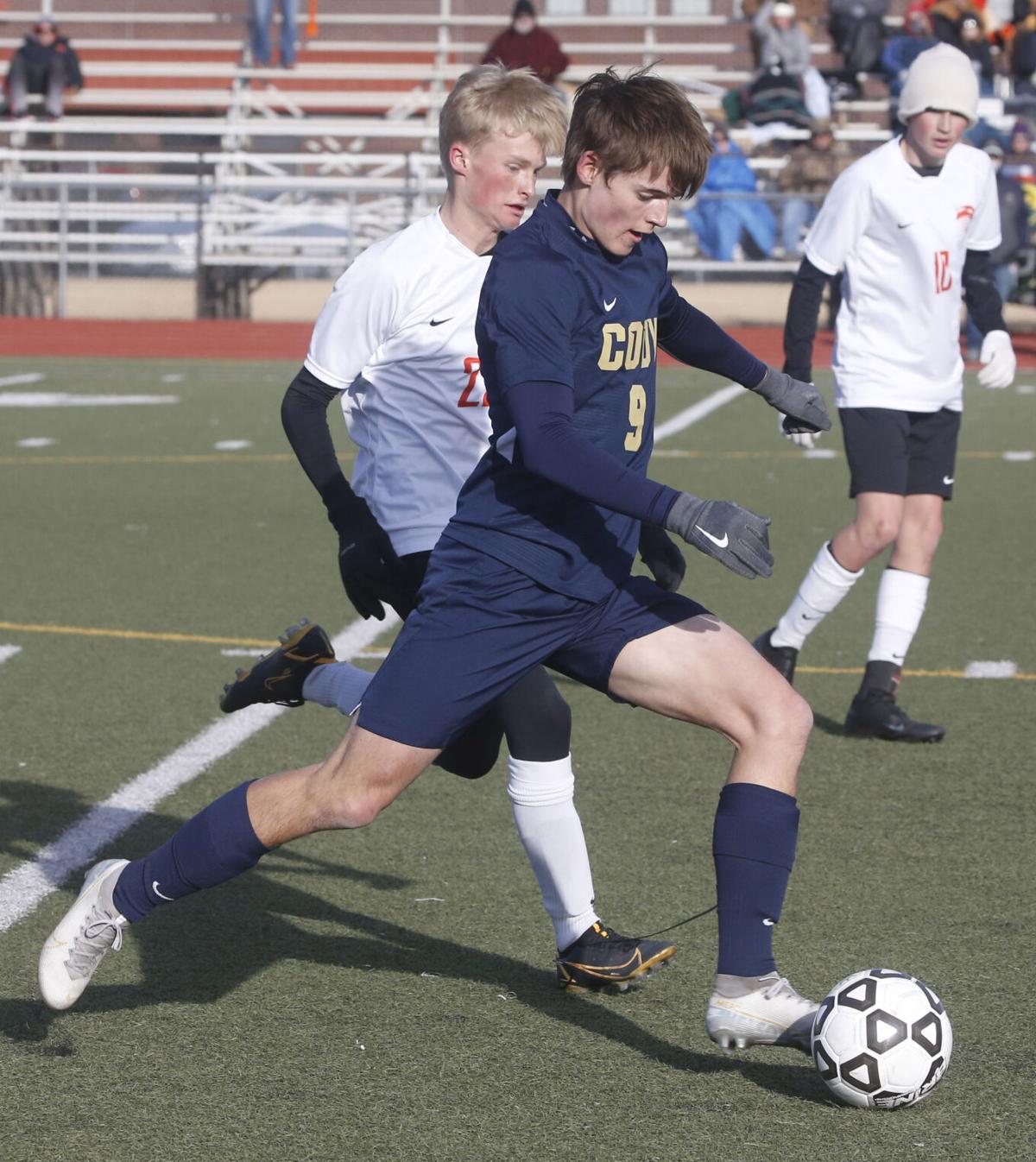 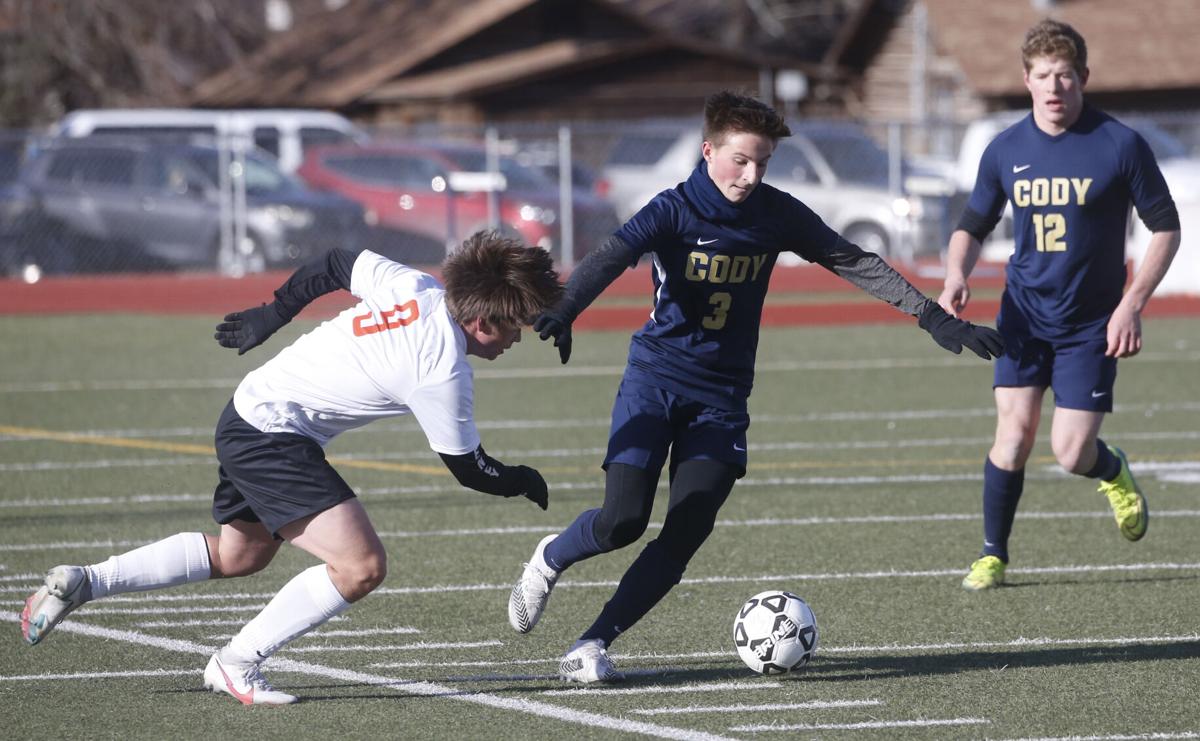 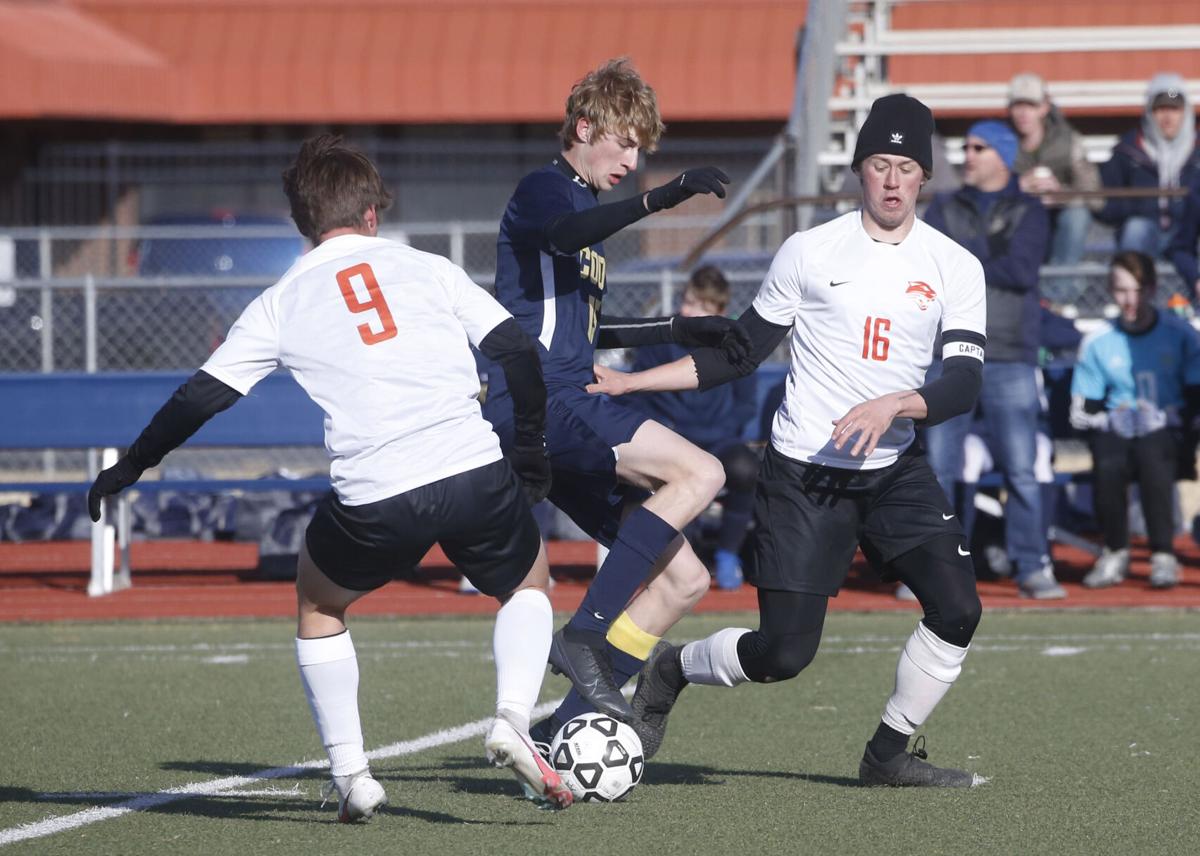 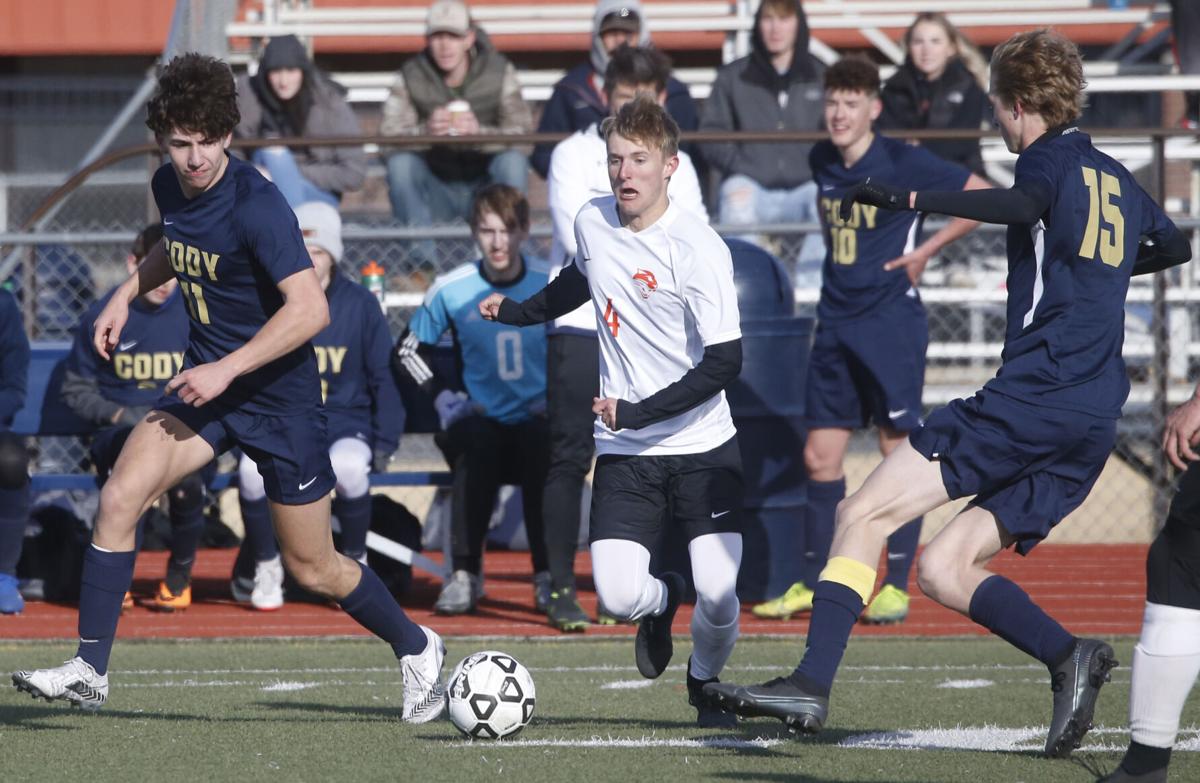 Jake Edgar (11) and Tucker Lynn move in on a Powell player while Wyatt Becker (10) looks on. 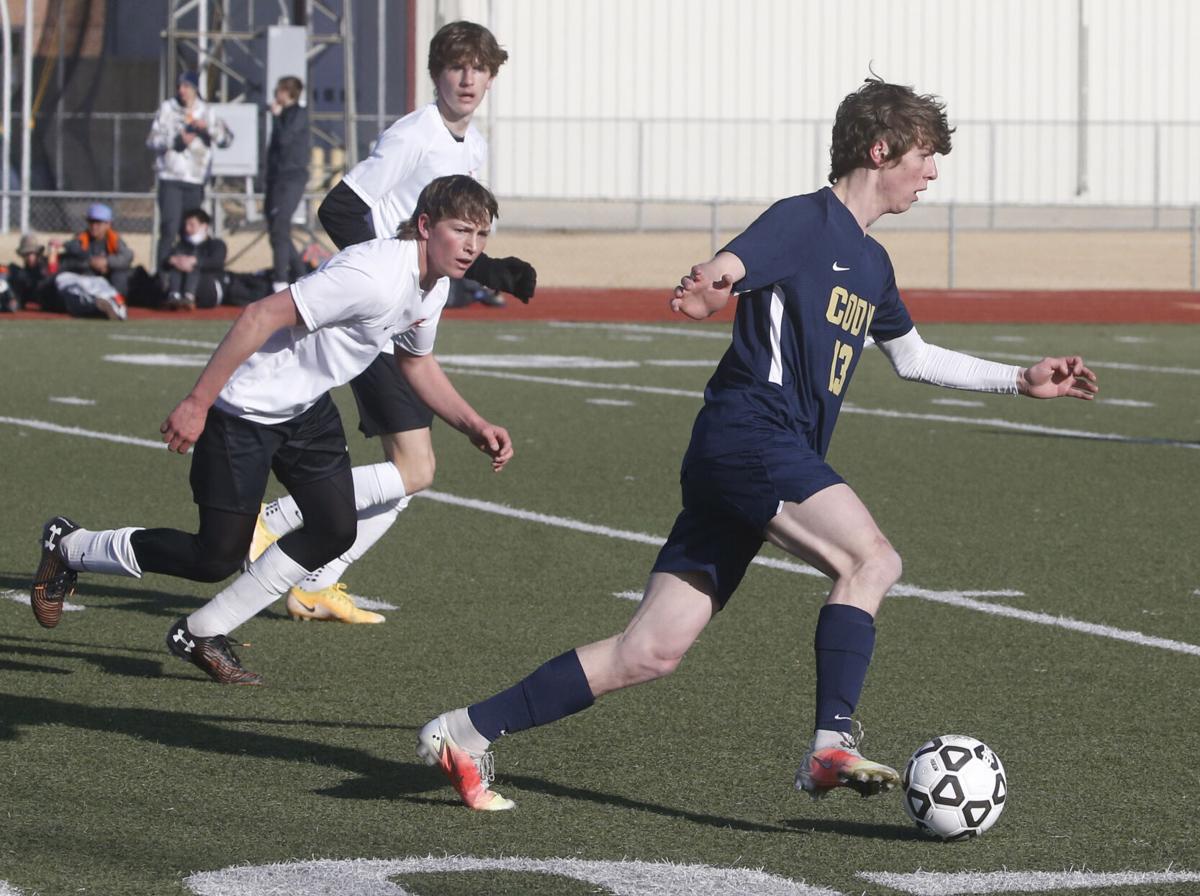 Jackson Gail moves up the field. 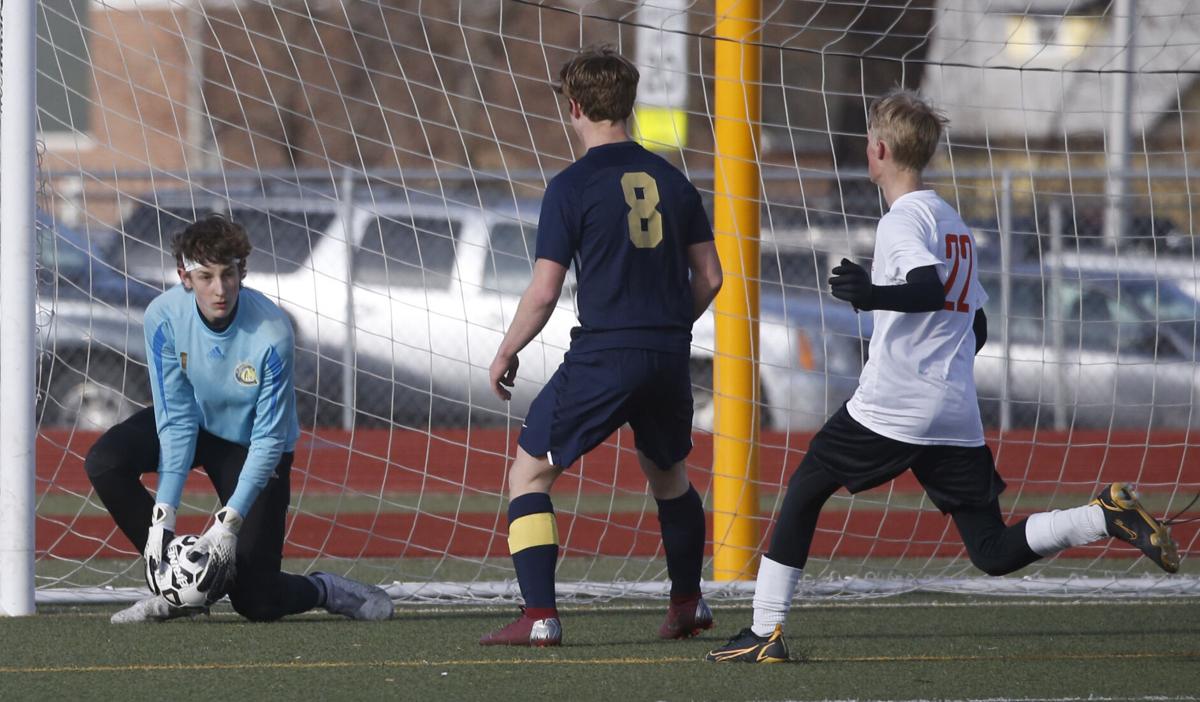 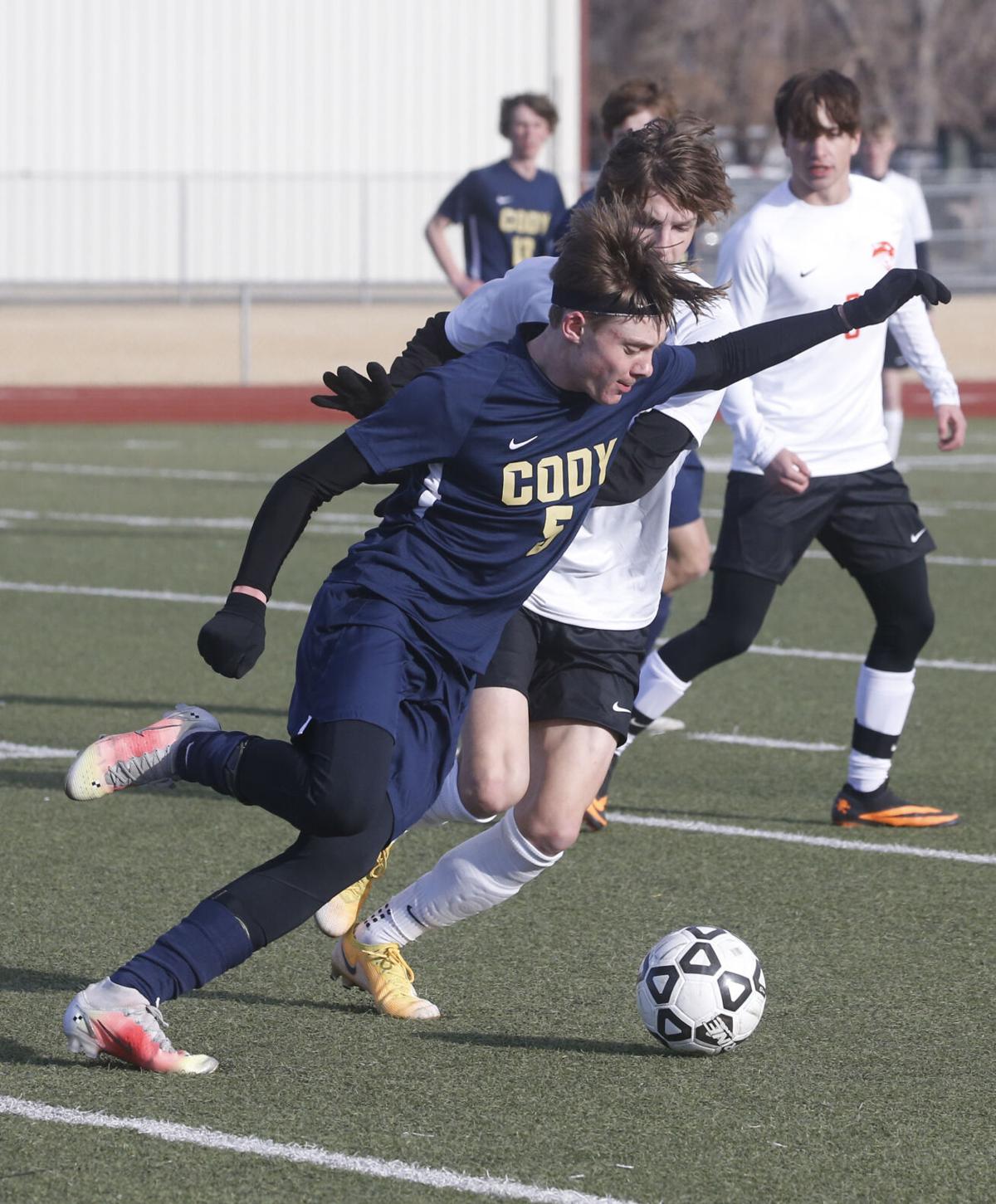 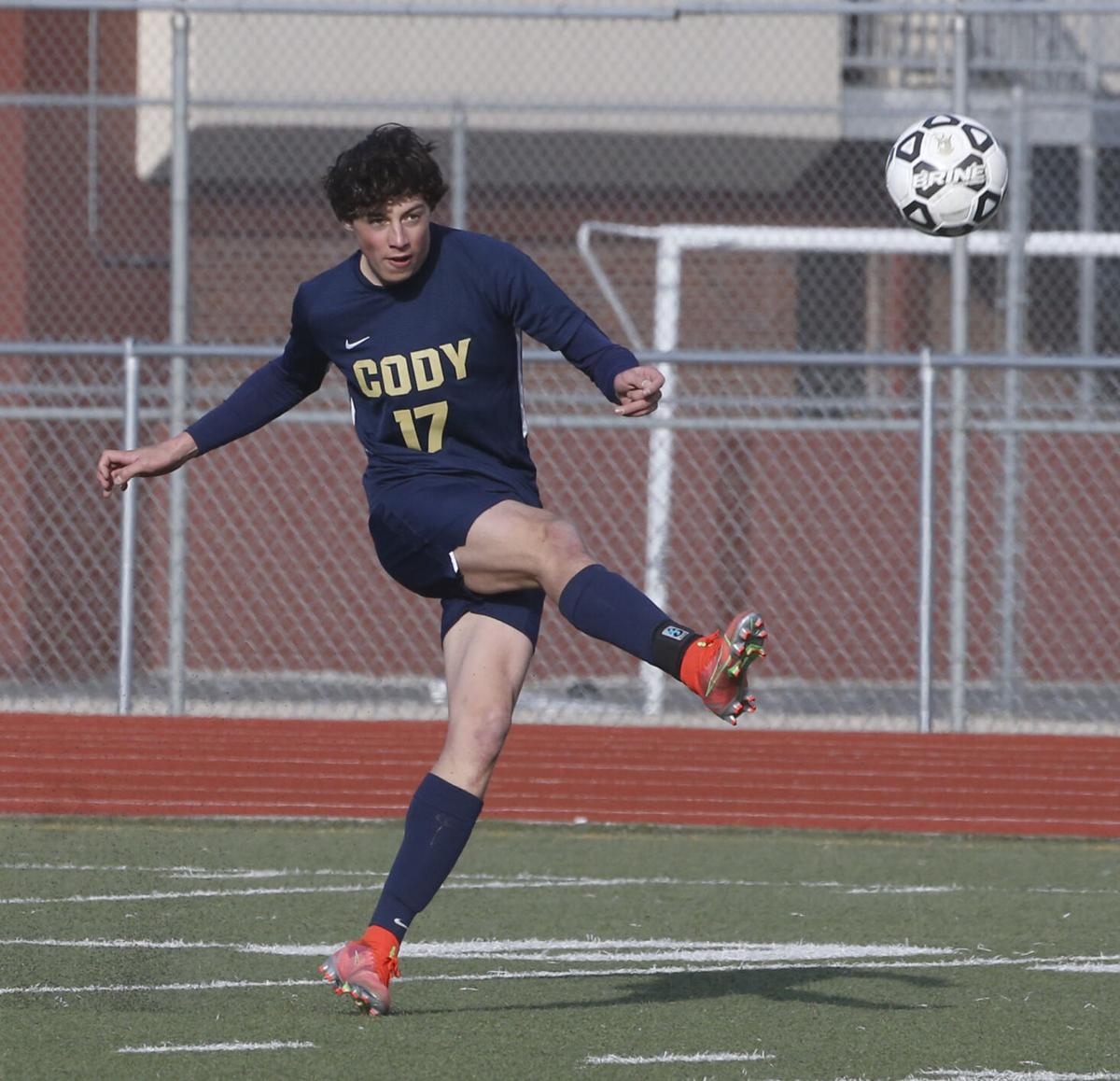 Reese Ward clears the ball past Jack Pool of Powell as Tucker Lynn (15) and Remy Broussard (17) look on Tuesday.

Jake Edgar (11) and Tucker Lynn move in on a Powell player while Wyatt Becker (10) looks on.

Jackson Gail moves up the field.

It was a cold, rough start for the Cody boys soccer team, which fell 9-1 in the first match of the year to a Powell team that controlled the contest from the opening whistle.

“It wasn’t the result I was looking for, but it feels good to play,” said coach Randy Rockey. “We’ve got a lot of untested guys that got tested immediately. They learned a lot of hard lessons, but we’ve got lots of room to grow.”

The Broncs (0-1, 0-1 3A West) struggled to maintain possession from the outset, making tackles but unable to find a Bronc on the other end of the pass. The Panthers (2-0, 1-0 3A West) spent most of the first half on the Cody side of the field, led by junior Hawkin Sweeney who scored six goals in the match.

It didn’t take long for the Panthers to press their advantage against a lack of defensive pressure and find the back of the net, scoring in the seventh minute and following that with another goal just three minutes later. Powell led 5-0 at the end of the first half.

It was more even in the second half, with the Broncs finding ways to work the ball up the field, sending a few passes streaking between defenders to forwards Jackson Gail and C.J. Dominick, but the Panther defense kept close on their heels.

After a Panther yellow card in the 67th minute, senior Tucker Lynn lined up a free kick that arched into the upper left corner of the Powell goal, just beyond the outstretched arms of Powell goalie Ashton Brewer. A minute later, Lynn was given a yellow card himself.

“What I was trying to do there was set the tone for the season, that we need to be playing like that if we’re going to want to compete, then we’re going to need to win those challenges,” Lynn said. “[Scoring] was nice. I was pretty upset with how the game was going at that point. I was hoping to get at least a couple more up there for our team, but we weren’t able to execute.”

Despite the wide margin on the scoreboard, there was plenty to learn from the match. Rockey tried both senior Ethan Asay and sophomore Wilkins Radakovich in goal. The defensive line, made entirely of new players to the program, also got the chance to see some new faces and be tested by one of the top strikers in 3A in Sweeney.

“It’s a lot different than any other sports I’ve played,” said senior Keaton Stone. “We’re a pretty inexperienced group and it was good just to get some minutes in and I think we’re going to improve after this.”

Rockey will be using the long break between matches to work with his players to get the defenders more comfortable and winning 50-50 balls in the air. Though the match didn’t go as he’d hoped, he’s still proud of his team.

“That’s a tough first game, but I think we have a good mindset going forward,” he said. “You never want to see that score on the scoreboard, but I think that the good news is that our ceiling is super high and we’re nowhere near our final form.”

The Broncs travel to Riverton (0-1) on Friday to face the Wolverines. Kickoff is at 5 p.m.