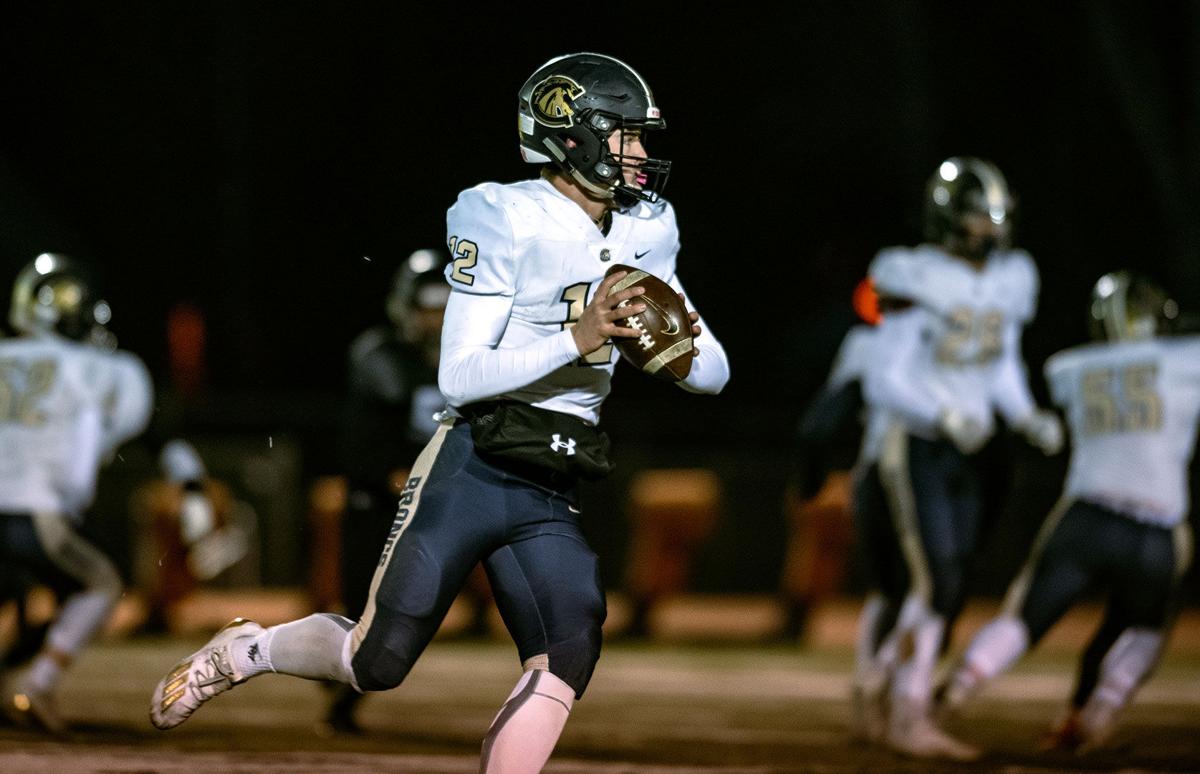 Caleb Pryor looks for an opening to pass on Friday against Jackson. 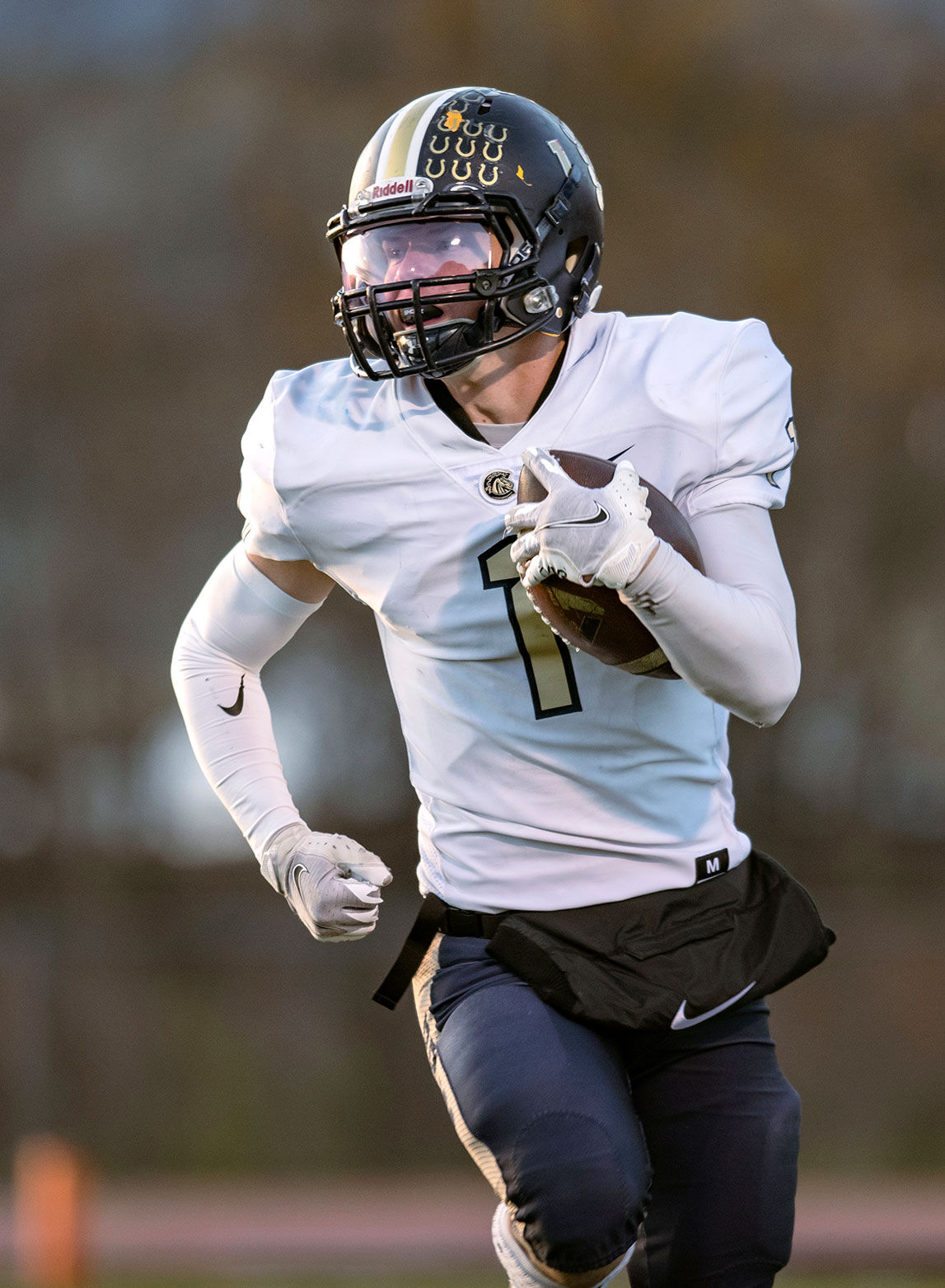 Caleb Pryor looks for an opening to pass on Friday against Jackson.

The No. 2 Cody football team accomplished all of its regular season goals on Friday, winning the 3A West conference title and earning the No. 1 seed for the playoffs, all while dismantling No. 1 Jackson 48-6 on the road.

Even more importantly, the Broncs (7-1) clinched the No. 1 seed for the playoffs and guaranteed home field advantage throughout the postseason. With a loss the Broncs could have fallen as far as the No. 3 seed, but none of that matters as they took their destiny into their own hands.

“In such a weird year, home-field advantage is so important,” said coach Matt McFadden, “not having to wear a face mask on a bus for six hours.”

Although the Broncs entered the game with confidence and expected to win, the margin of victory was not expected.

“It was pretty surprising,” said Cody Phillips, who led the Broncs with two touchdowns, 147 total yards and a sack. “We came out with a lot of energy, a lot more than Jackson.”

The Broncs played about as perfectly as they could have hoped for, starting strong out of the gate and never letting up. Jackson never threatened and did not score until the last three minutes of the game.

“It was the best away game we’ve had this year,” Daniel Gorman said.

Nic Talich put his exclamation mark on the first half with a pick-six interception return at the end of the second quarter to give the Broncs a four-score lead they would continue to build on in the second half.

“It was just kind of a game changer,” Gorman said.

Getting off the bus strong was a big focus for the team, no easy task after a long road trip to Jackson.

“We really tried to challenge them to prepare themselves mentally for the game,” McFadden said.

Phillips got it started at 6:10 in the first when Talich took a direct snap and handed it off to Phillips who barreled through the line. It was 7-0 after the PAT.

On Jackson’s second play from scrimmage on the next drive, a bobbled handoff led to Gorman and Keaton Stone rushing in for the ball and Stone recovering it at the Jackson 20. The Broncs got all the way to the 5-yard line but turned it over on downs.

Nathan Wilson then intercepted a pass by Jackson’s Sadler Smith on the host’s next drive, returning the Broncs the ball.

Cody scored again on a Caleb Pryor 1-yard keeper at 9:18 in the second. Jackson Gail made it 14-0 after the PAT.

After Cody forced another Jackson (7-2) fourth-and-out, the Broncs needed only one play to score again.

Phillips went around the corner and found enough holes through the defenders to take it 38 yards to the end zone at 8:03 in the second and it was 21-0.

Jackson did push all the way to the Cody 25 on its last drive of the half,  but Talich said, “No more.”

Running across the field on an underthrown Smith pass, Talich intercepted the ball and returned it 90 yards for a score. It was his third interception of the season.

“It’s really fun to watch him play and play with him,” Gorman said. “He’s had a great year.”

Gail missed the extra point, but it hardly mattered as the Broncs had a comfortable 27-0 lead entering the half.

Cody got the ball to start the second half and kept pouring it on.

It took 16 plays to go 64 yards, but a fourth down-and-goal Pryor pass found Devyn Engdahl for an acrobatic catch in the back of the end zone.

The score made it 34-0 and even better, the drive drained 8:39 of game time, giving Jackson little opportunity to stage a comeback.

Cody was 3-for-3 on fourth downs on that drive alone.

At 11:18 in the fourth, Luke Talich got in on the scoring action when he found an open runway and carried home a 77-yard rushing TD, his second touchdown of the season.

On the next drive, Jackson Wood recovered a fumble on a Jackson punt attempt to set the Broncs up in the red zone with only 15 yards to go.

A few plays later Jackson Schroeder carried it in from 1-yard out with 8:05 remaining. A Nic Talich two-point conversion made it 48-0.

Brody Hasenack got Jackson its only score of the game on a 1-yard rush with 3:08 remaining. After a missed two-point conversion it was 48-6.

The Jackson score broke a streak of eight consecutive scoreless quarters for the Broncs defense. Cody’s defense also caused two fumbles and made two interceptions in the game.

Pryor was 6-for-12 with 116 passing yards. Phillips finished with 96 rushing yards on 10 carries.

After missing a sizable portion of last season with an injury, Phillips has had a breakout senior campaign with a team-leading eight touchdowns.

“I have to give credit to my teammates,” he said. “Everyone on the team has been working hard all season. The line has really been working on their blocking.”

The Broncs finished with 390 total yards.

“We’re just trying to get one percent better each week, each day, each half,” Gorman said.

If Cody wins it will play the winner of the Powell and Lander game, once again at home.

“It’s a fun atmosphere with our fans, we like playing in front of them,” McFadden said.