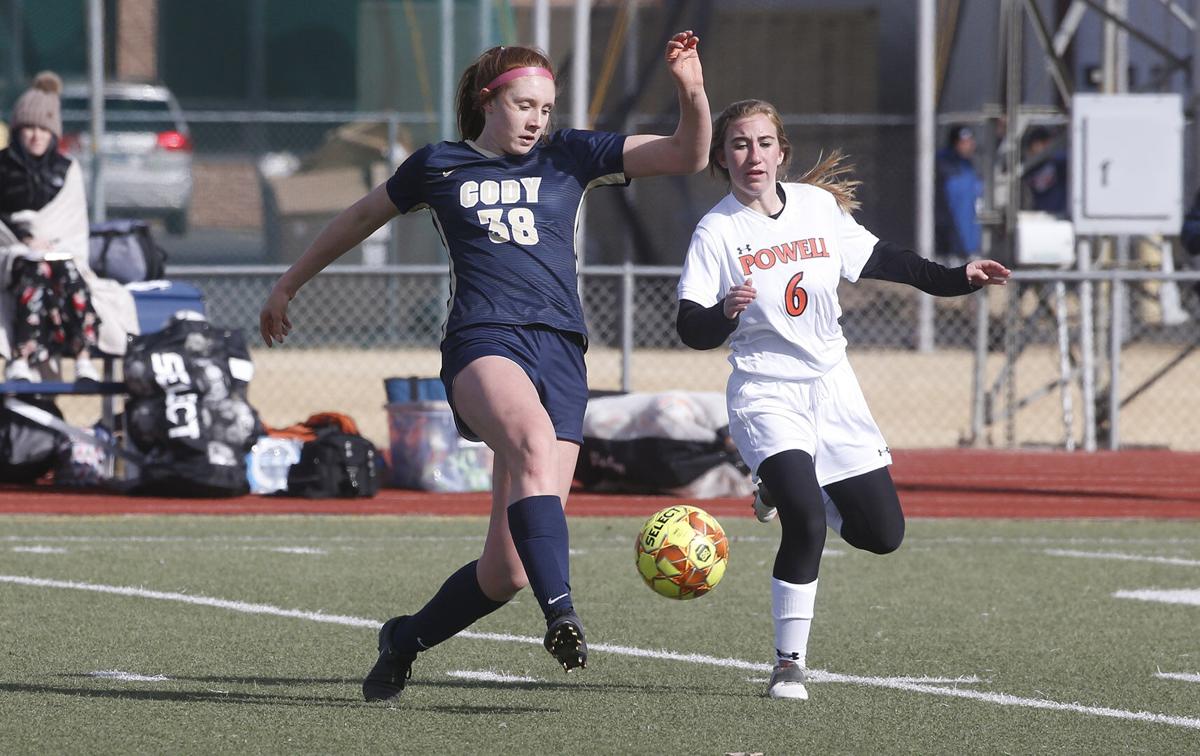 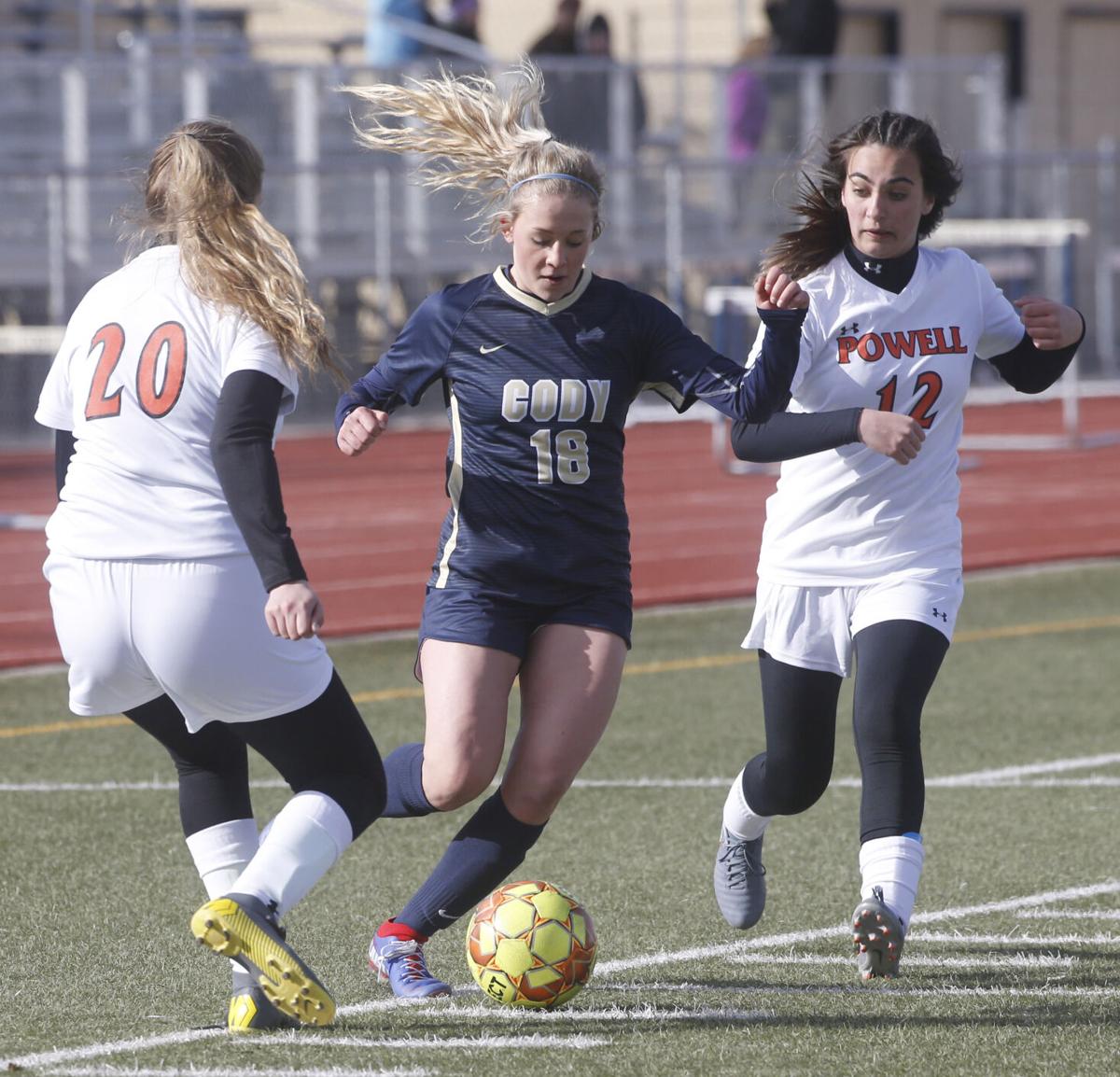 Aspen Kalkowski weaves through Sarah Dunkerley and Kenzie Fields of Powell on Tuesday. 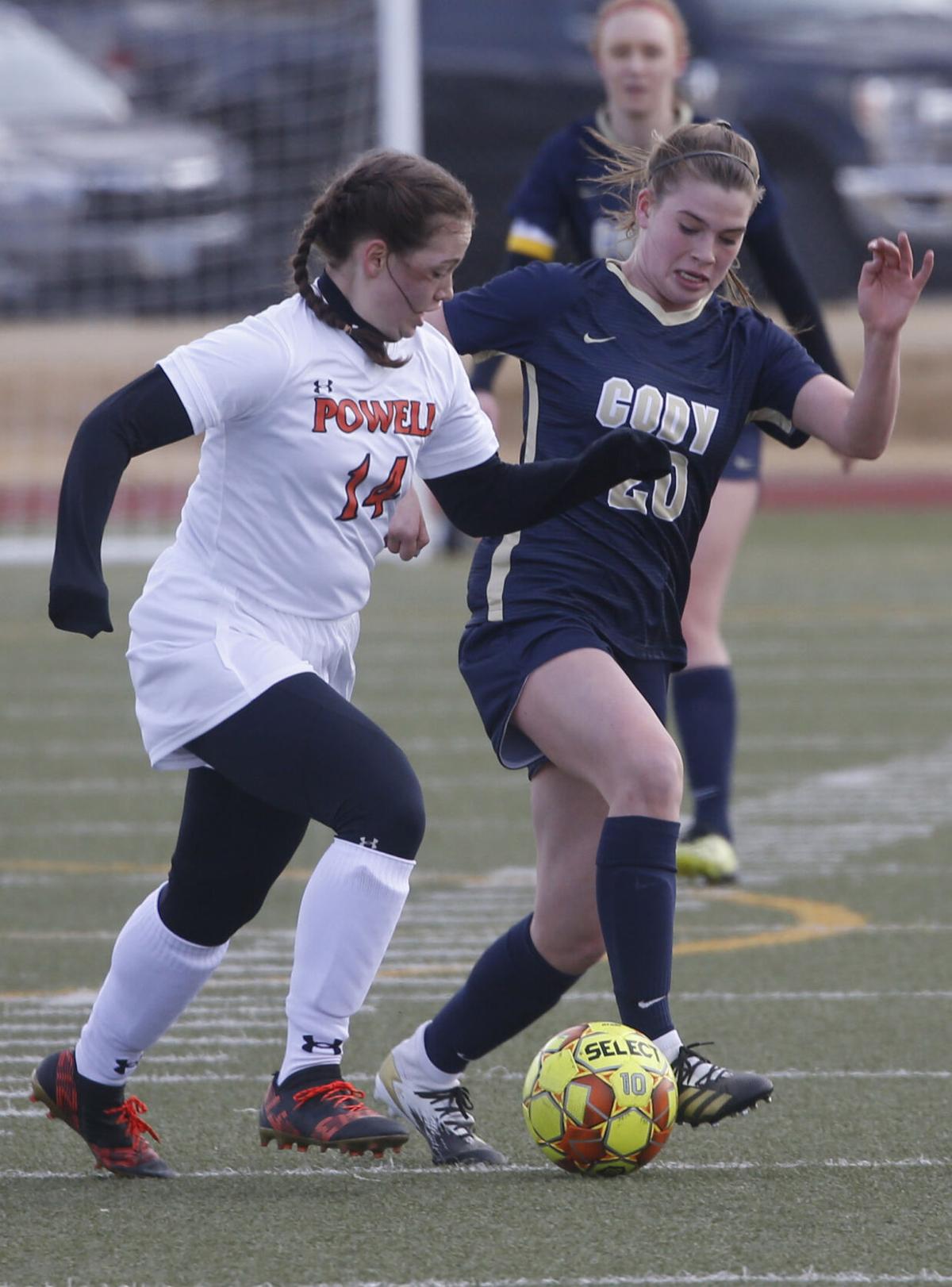 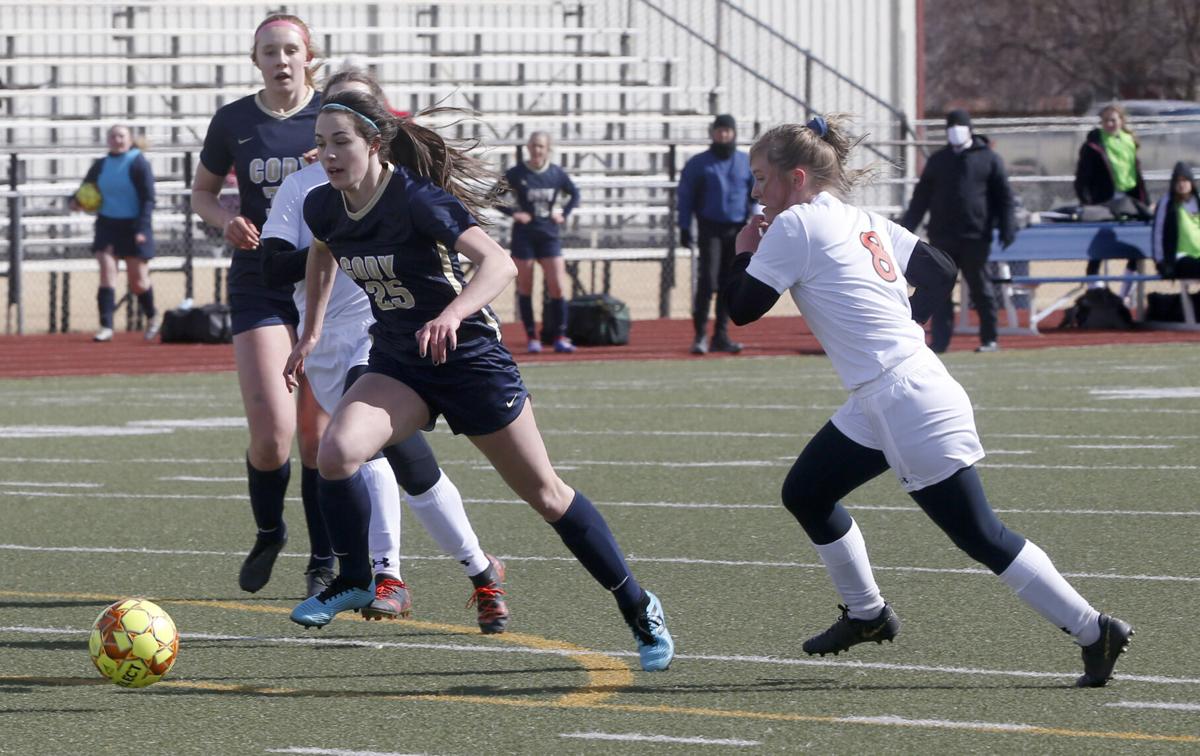 Autumn Wilson heads to the goal. 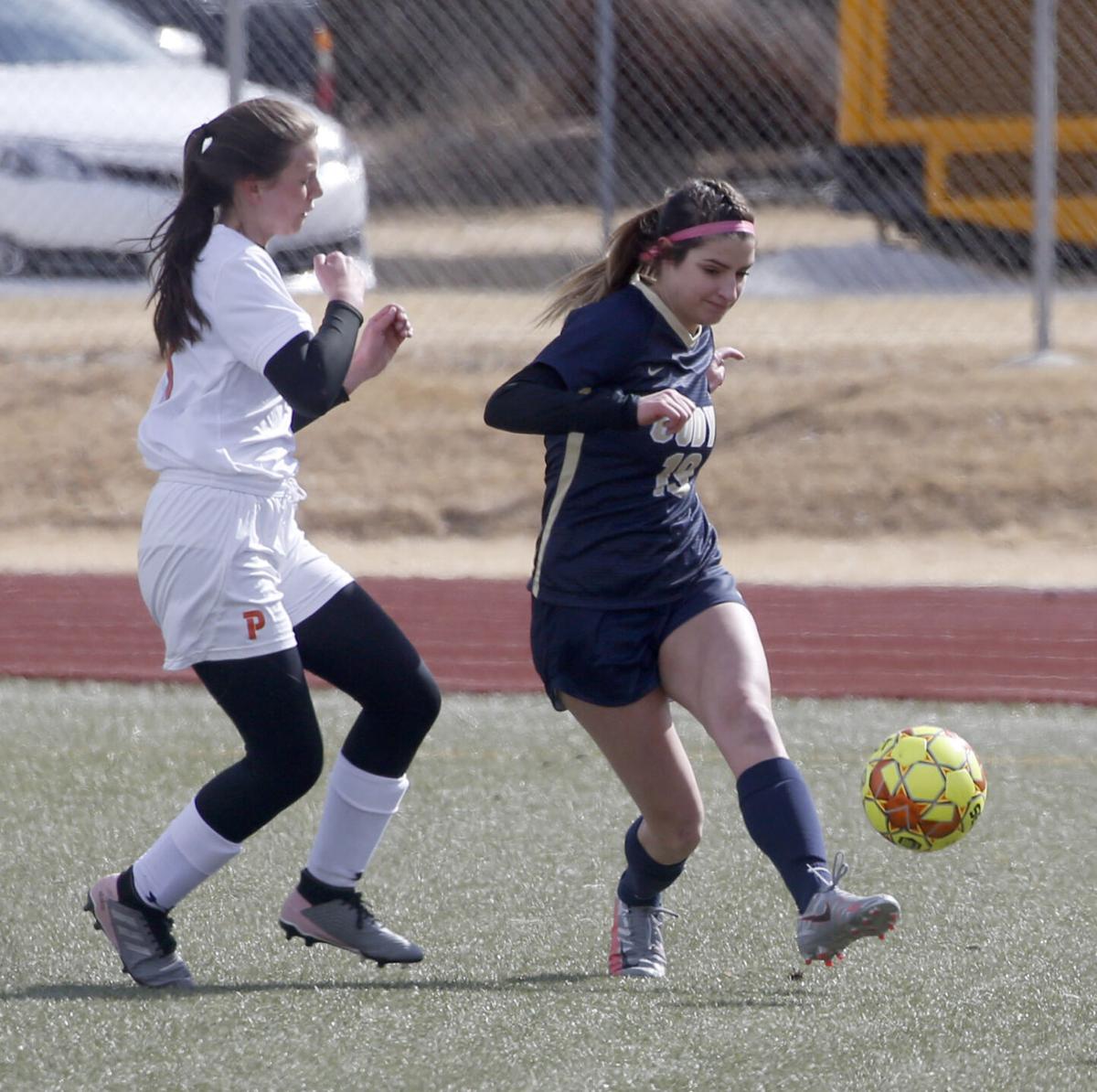 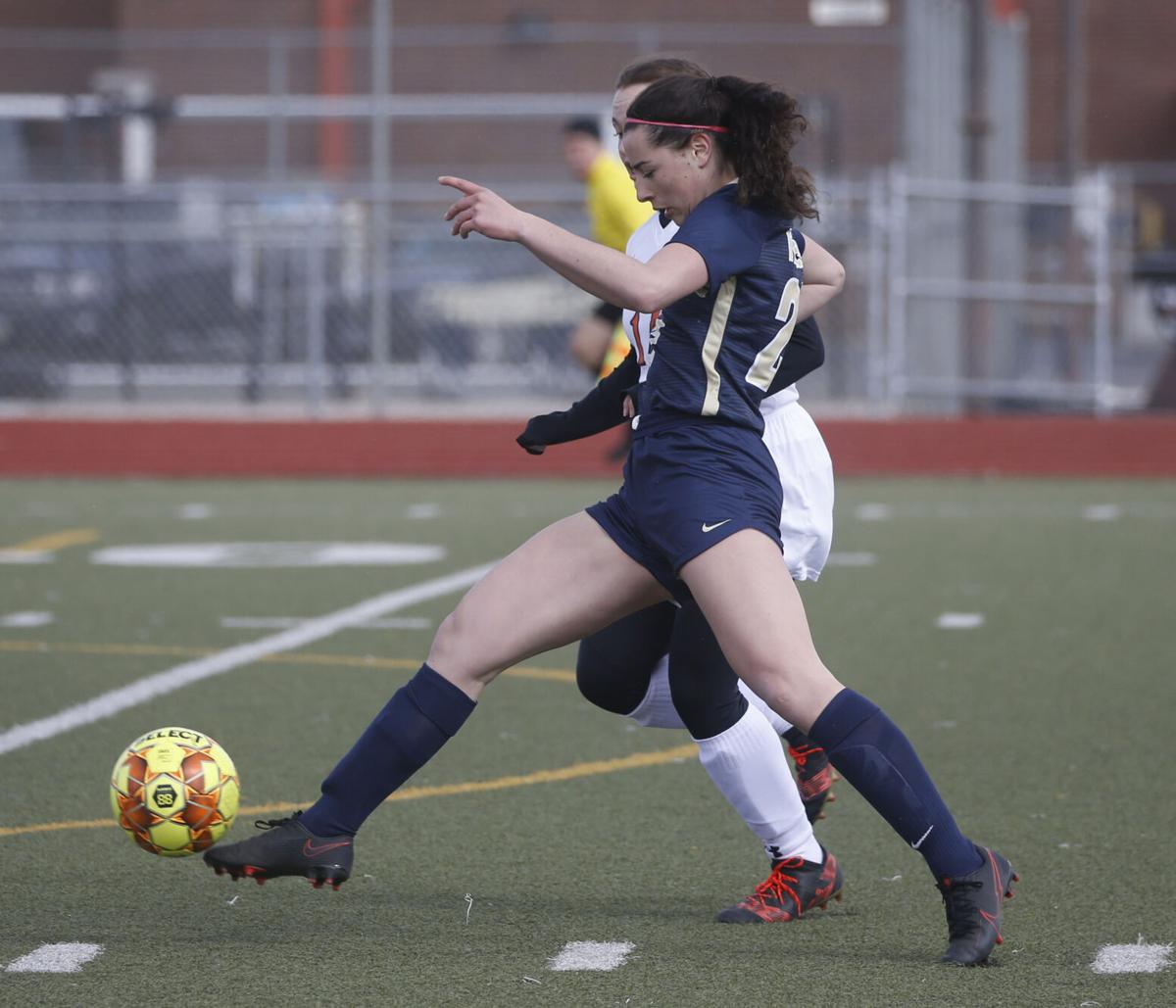 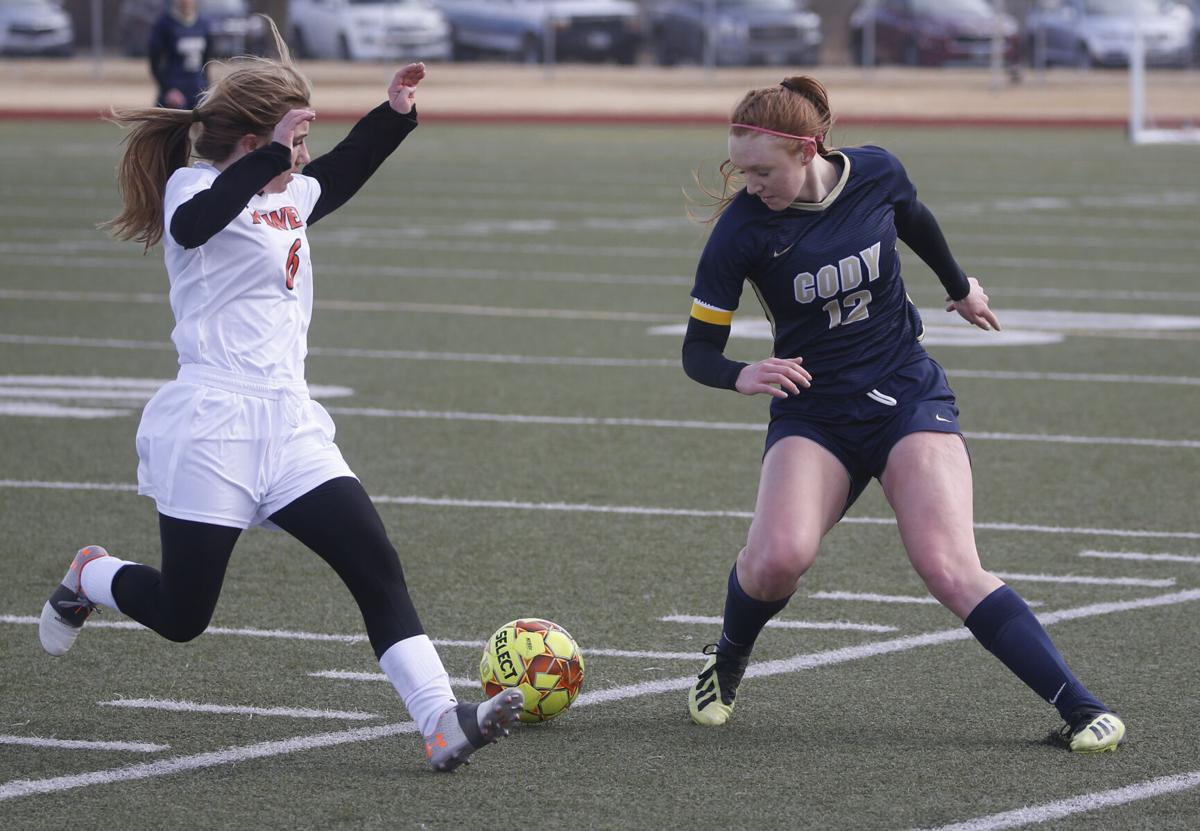 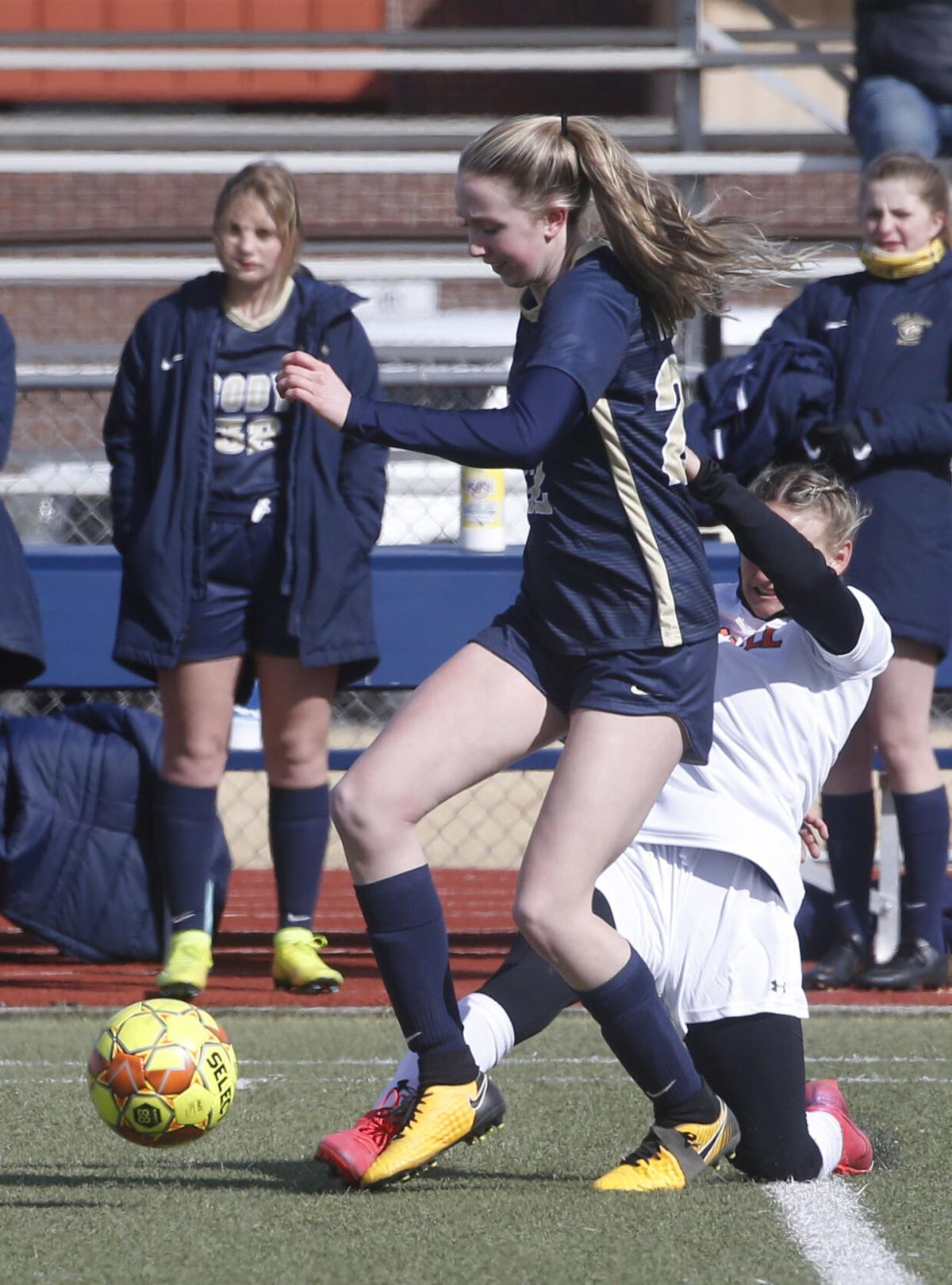 Brylee Allred throws in the ball. 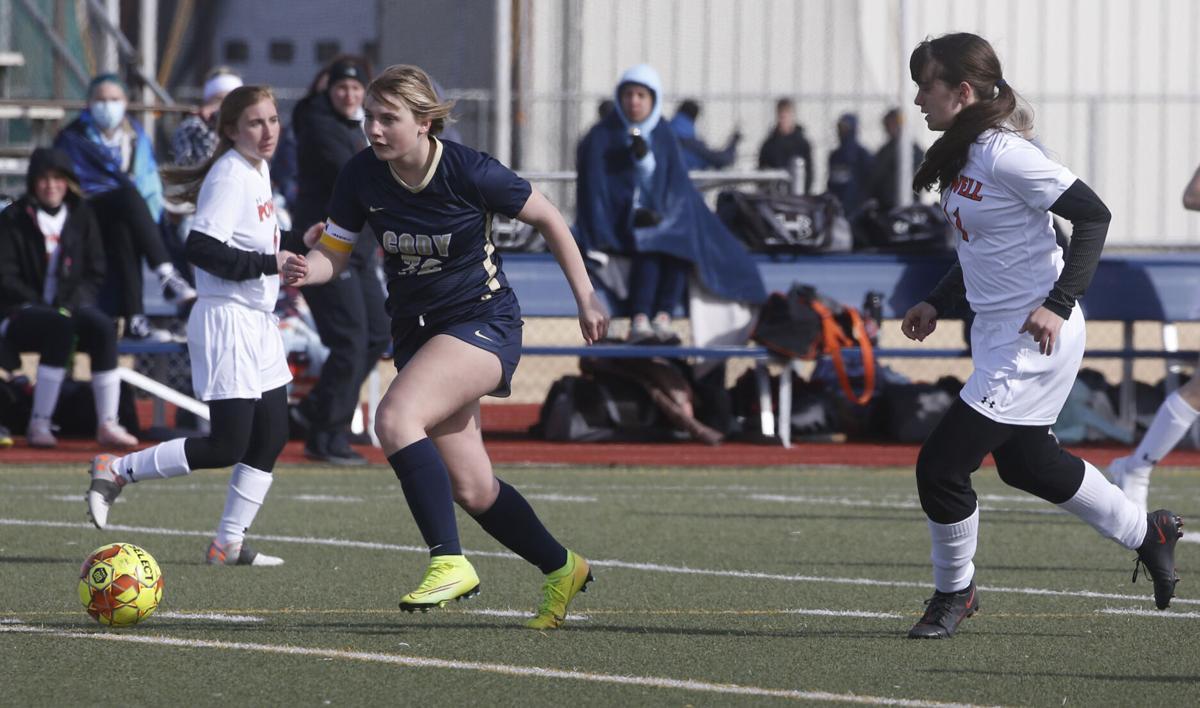 Emma Nieters moves up the field. 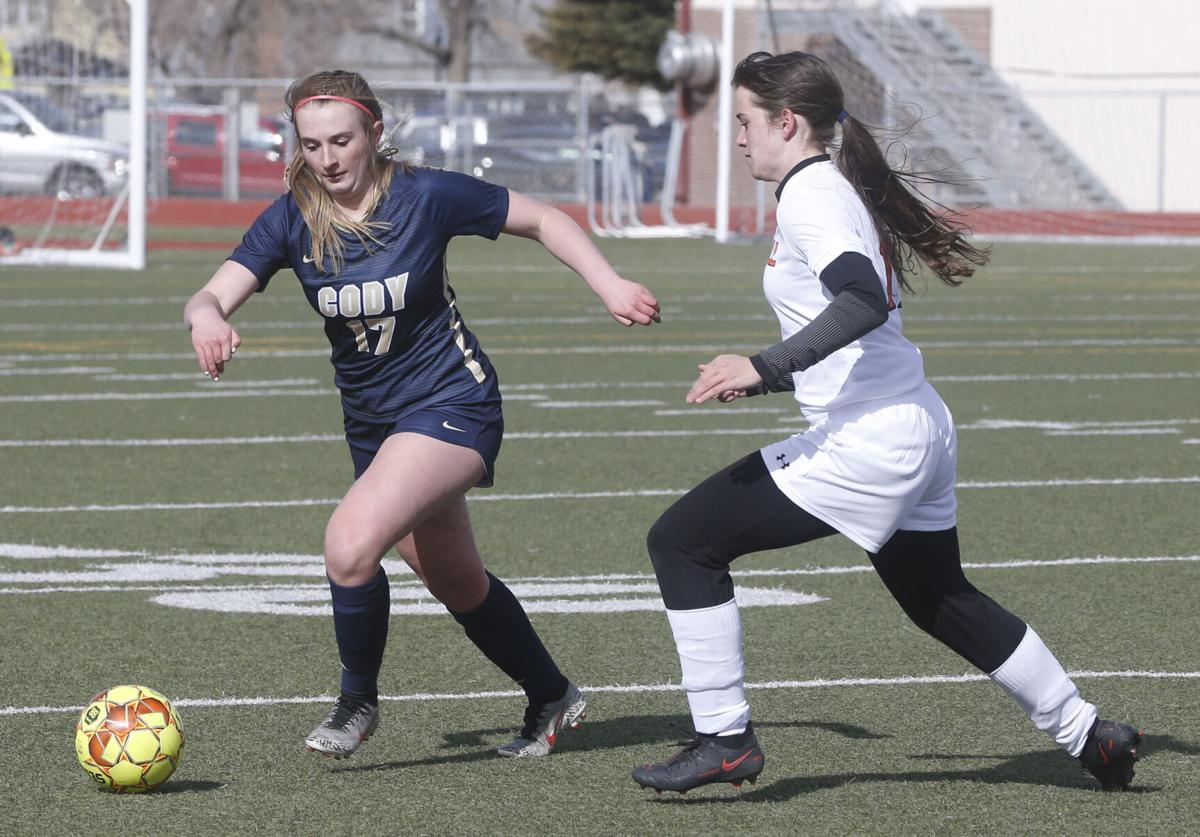 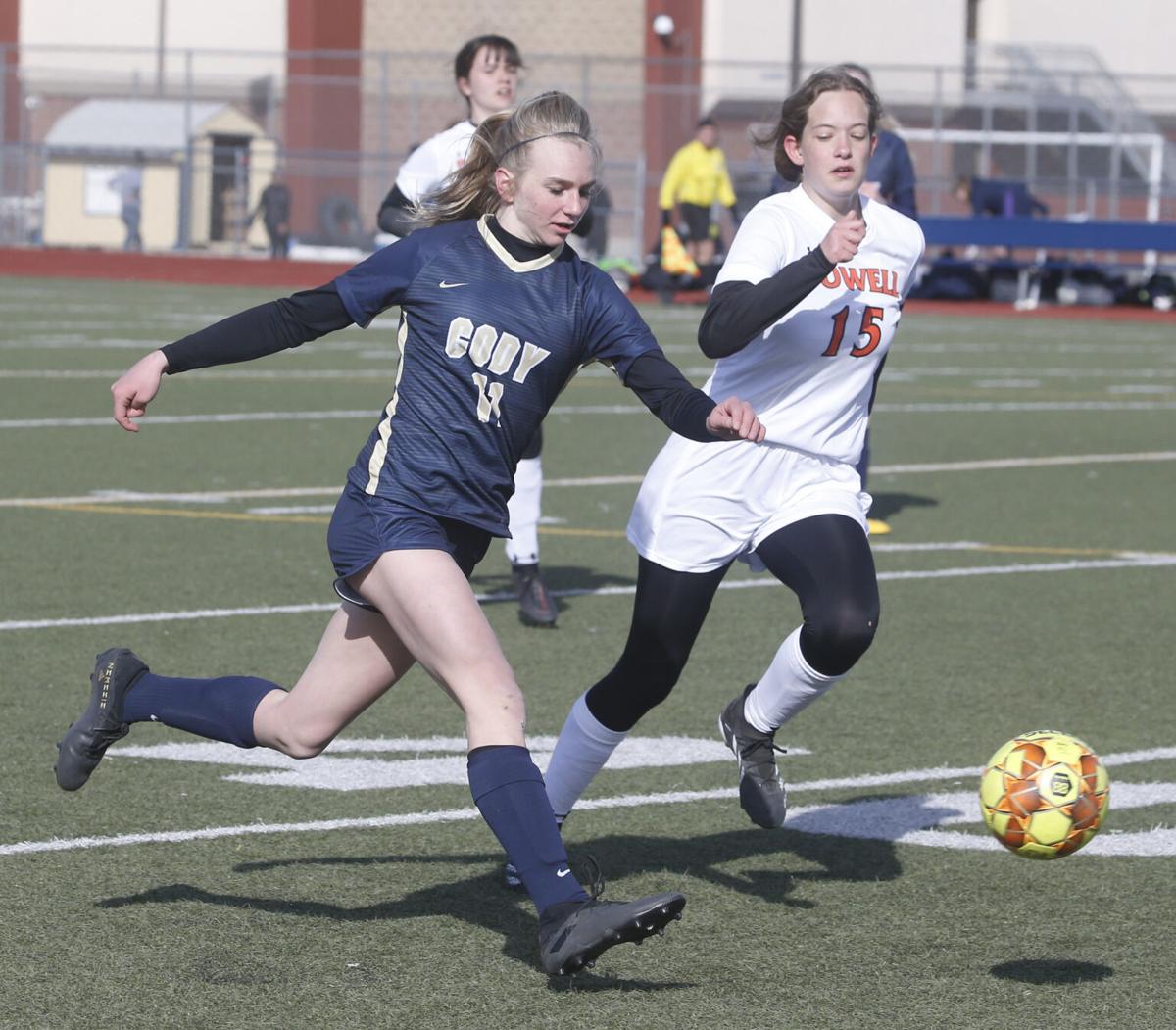 Molly Hays moves the ball up the field.

Aspen Kalkowski weaves through Sarah Dunkerley and Kenzie Fields of Powell on Tuesday.

Autumn Wilson heads to the goal.

Brylee Allred throws in the ball.

Emma Nieters moves up the field.

Molly Hays moves the ball up the field.

“Our scoring showed it and our attitude showed it as well,” forward Autumn Wilson said. “It was our first game against our rival so we were up for it. Seeing as we scored in the first few minutes I don’t think we were too nervous.”

Cody took control right from the start. The team’s goal was to score in the first five minutes. It only needed two.

Ally Boysen dribbled up the left side and crossed to Jessa Lynn for an easy shot in front of the goal.

“I was excited,” Lynn said. “I just wanted to help us gain control of the game.”

The Fillies continued to pressure the Lady Panther defense, creating multiple give-and-go opportunities that led to shots on goal.

In the sixth minute, Cody scored again. Torrie Schutzman took a shot in front of the net that was deflected by Powell goalie Mattie Larsen. Aspen Kalkowski was there to pick up the rebound, which was again batted away by Larsen. The goalie couldn’t stop the third shot though, as Lynn scored her second goal in the sixth minute.

Two minutes later the Fillies made it 3-0 when Boysen took control in the middle and passed ahead to Autumn Wilson, who slipped past the Powell defense for a one-on-one with the keeper.

“We were seeing the field and different opportunities,” Wilson said. “We were looking for the goal.”

The Fillies continued to roll and in the 10th minute Wilson had a through ball ahead of the defense to Schutzman, who was by herself with the keeper and tapped it in.

From there the scoring frenzy slowed slightly. Then in the 21st minute Lynn passed to Wilson on the right side near the 30. She dribbled up the left side and took a shot from about 10 yards out for her second goal of the day.

Just a minute later, Emma Nieters took control of the ball in the backfield and traveled up field. She made a quick pass to Kalkowski, who fed the ball up to Wilson for her third goal.

The Fillies dominated the midfield all day, rarely letting Powell get on their side of the field. Goalie Izzy Radakovich came out a few times to pick up a ball but was never seriously challenged.

Cody’s final goal of the half came in the 33rd minute when the Fillies were given a corner kick. They eventually worked the ball around to the other side of the field where Schutzman buried it in the right corner of the net to give Cody a 7-0 lead at the half.

“Our intensity was good, but after we scored a lot we started slowing up,” Wilson said. “We need to work on staying in the first minute to the last minute of the game.”

The Fillies came out in the second half with the directive to only take shots from outside the 18. Cody continued to control the tempo, though, and saw multiple shots from several different girls including Schutzman, Wilson, Kalkowski, Boysen, Allie Broussard, Kennedi Niemann and Nieters, but all went right to the goalie or were wide of the net.

The Fillies lone goal of the half came in the 63rd minute when Powell was called for a handball. Nieters took the free kick quickly and caught the Lady Panthers unaware, as the defense was still trying to set up its wall and wasn’t watching the ball.

During the game the Fillies were able to work in several younger players to gain some experience.

“Overall we did a great job and didn’t let them score,” coach Marian Miears said. “We were a little nervous because we hadn’t played a game and Powell played Saturday, but we were ready to go.”

While the players were happy with the game, Miears said there’s still room for improvement.

“Once their defense gets the ball we need to hustle back,” she said. “We all need to get back quickly on defense. We also need to practice shooting outside the 18.”

Cody travels to take on Riverton on Friday.

“It was really nice to get back on the field after two years,” Lynn said. “It was a great first game to get under our belts. Now we can prepare for the next game.”