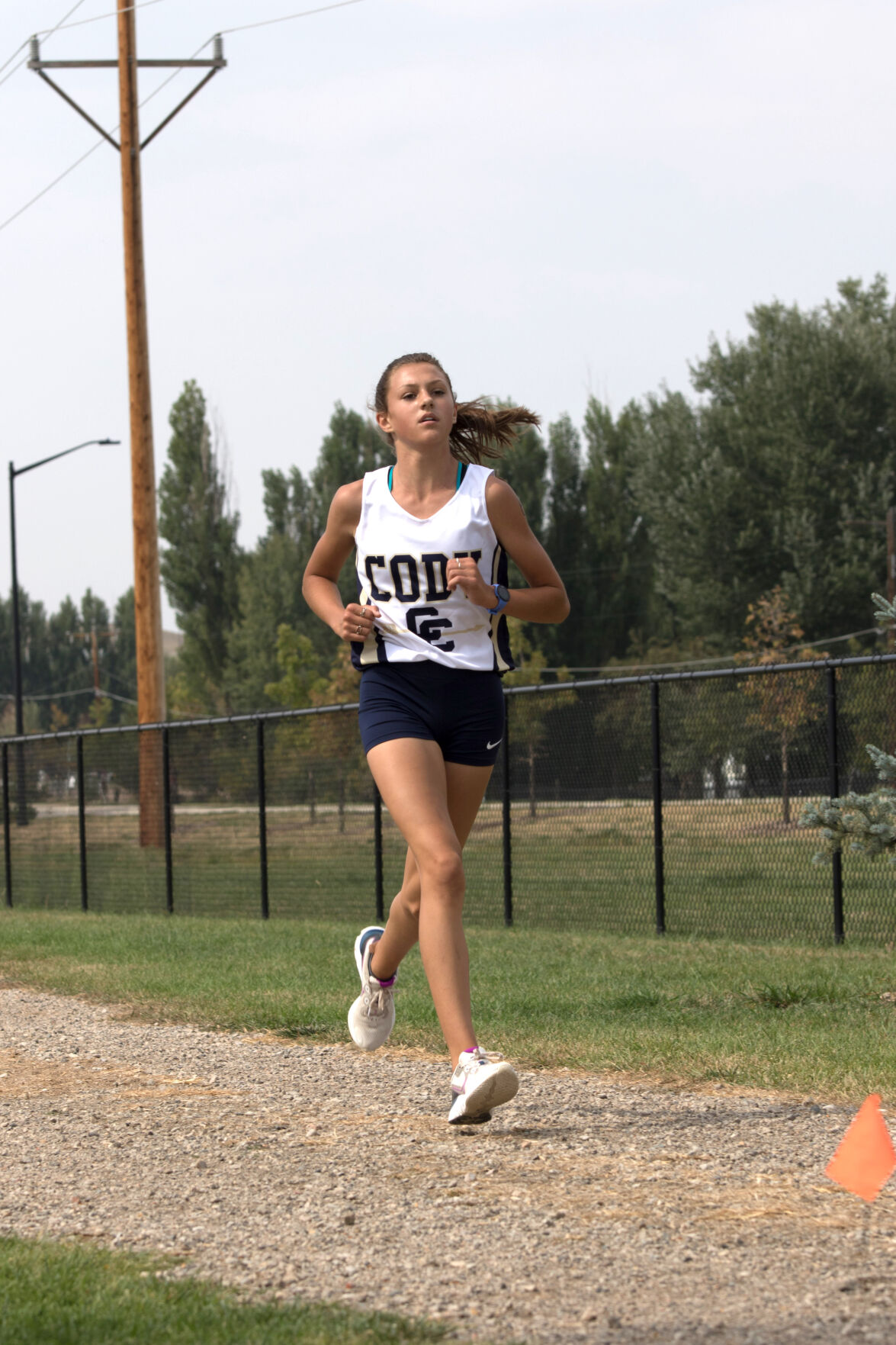 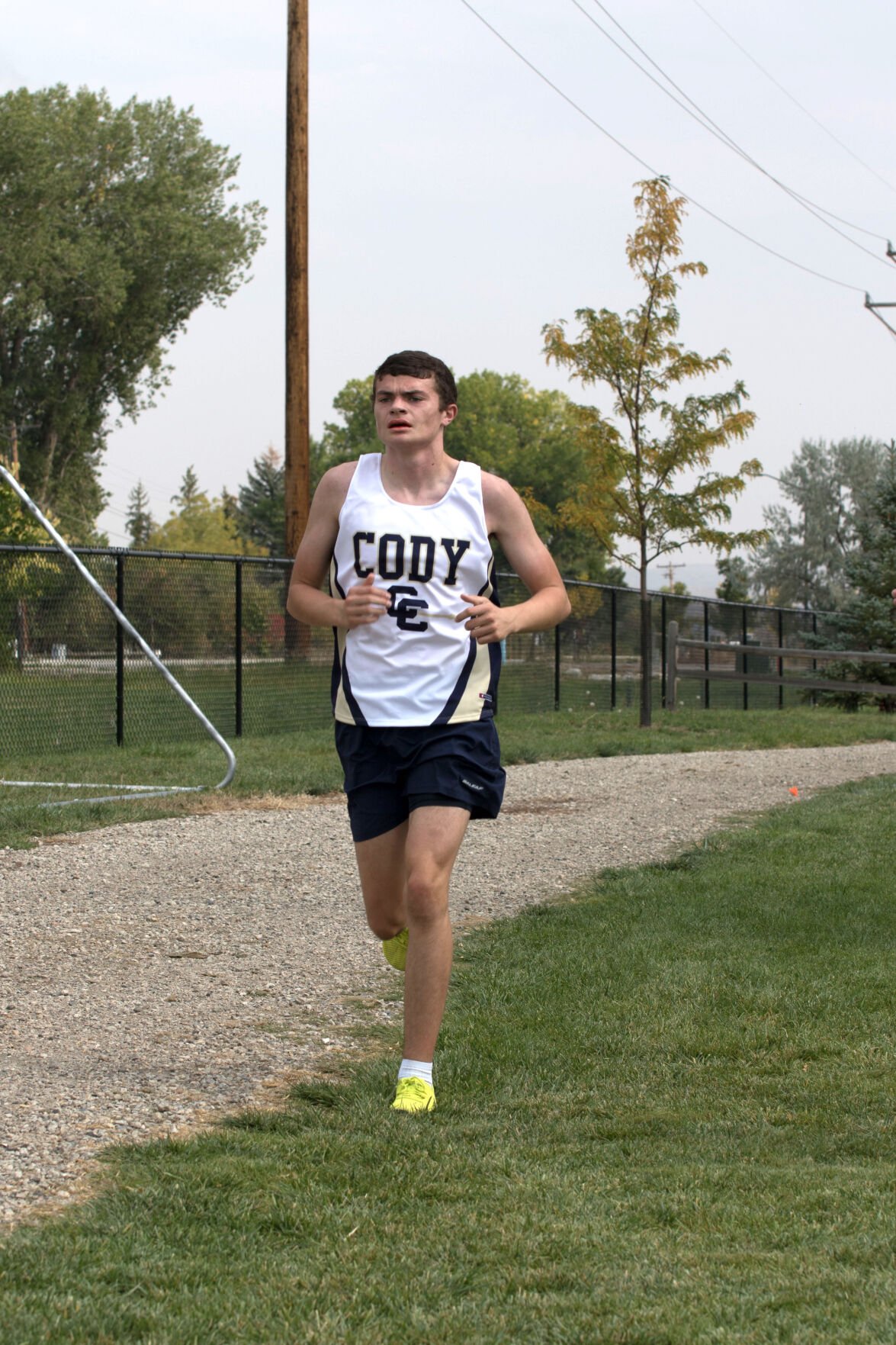 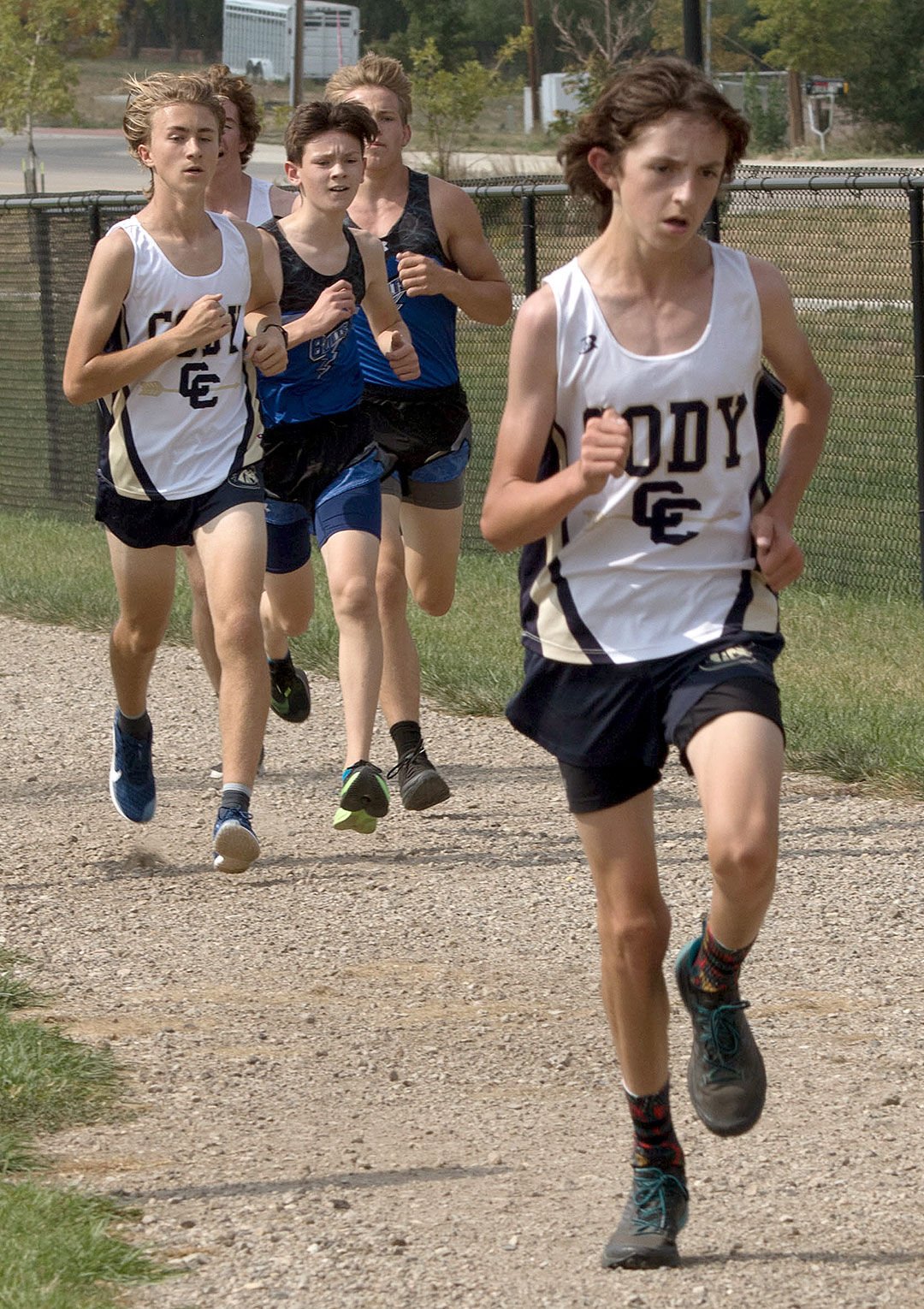 Charlie Hulbert (right) runs ahead of a pack that includes Kyle Graham during a race Saturday in Sheridan. (Photo by Jay Nielson)

Charlie Hulbert (right) runs ahead of a pack that includes Kyle Graham during a race Saturday in Sheridan. (Photo by Jay Nielson)

“The course was not a really fast course and it was not real spectator-friendly,” coach Maggie Kirkham said. “But we did pretty well.”

While senior Riley Smith was back again to lead the Cody girls to a win, and familiar faces Ava Stafford and Ashton Powell were the second and third Filly runners, a couple of freshmen made an impact.

“Elise and Keira are staying positive and giving it their all,” Smith said.

“Ashton Powell and Keira Jackson did a great job moving up the second half of the race, picking off several runners from Buffalo and Gillette,” Kirkham said. “Elisa Wachob was our fifth runner and ran very well.”

Powell enjoyed the course and her performance.

“I liked Sheridan’s course because it was pretty much out and back,” she said. “It was hot, but I thought I finished well.”

Kirkham said while Smith won after a week off due to sickness, the senior was not pleased with her time.

“She built up a huge lead, but struggled the last mile after missing almost a week of training with illness,” Kirkham said. “I thought Riley looked great the first two-thirds of the race, and fought hard to keep her lead.”

Kirkham was also pleased with Stafford’s improvement and aggressiveness in the race.

Cody finished with 35 points, just ahead of Buffalo with 40.

The Broncs finished second to Thunder Basin by five points, led for the second consecutive week by sophomore David Juergens, who finished third in 18:22.54.

After being passed at one point he said he made up ground to finish first for the Broncs.

“It was a hot day,” Juergens said. “Everybody on the team fought through the day.”

Cody’s other top boys runner, like Smith, had missed last week due to an illness.

“Wyatt Becker really struggled the first half of the race but settled in and came back really strong after a rough first 1.5 miles,” Kirkham said. “I was really proud that he kept going and found his rhythm when it would have been easy for him to give up. He showed tremendous grit.”

“For a freshman, he races with a lot of maturity,” Kirkham said. “He trusts his instincts and doesn’t panic and get pulled out too fast.”

She added that Hayden Campbell and Noah Vogt competed very well in the JV race to finish first and third respectively.

“It was great to see them run so confidently and aggressively,” Kirkham said.