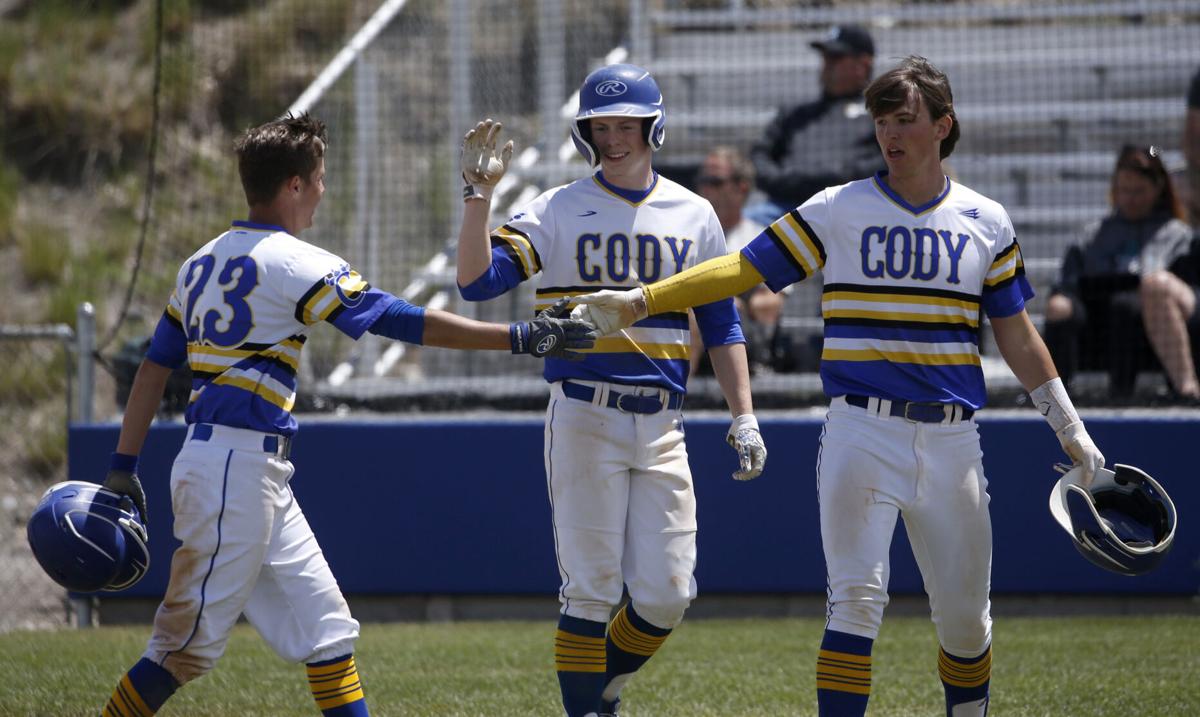 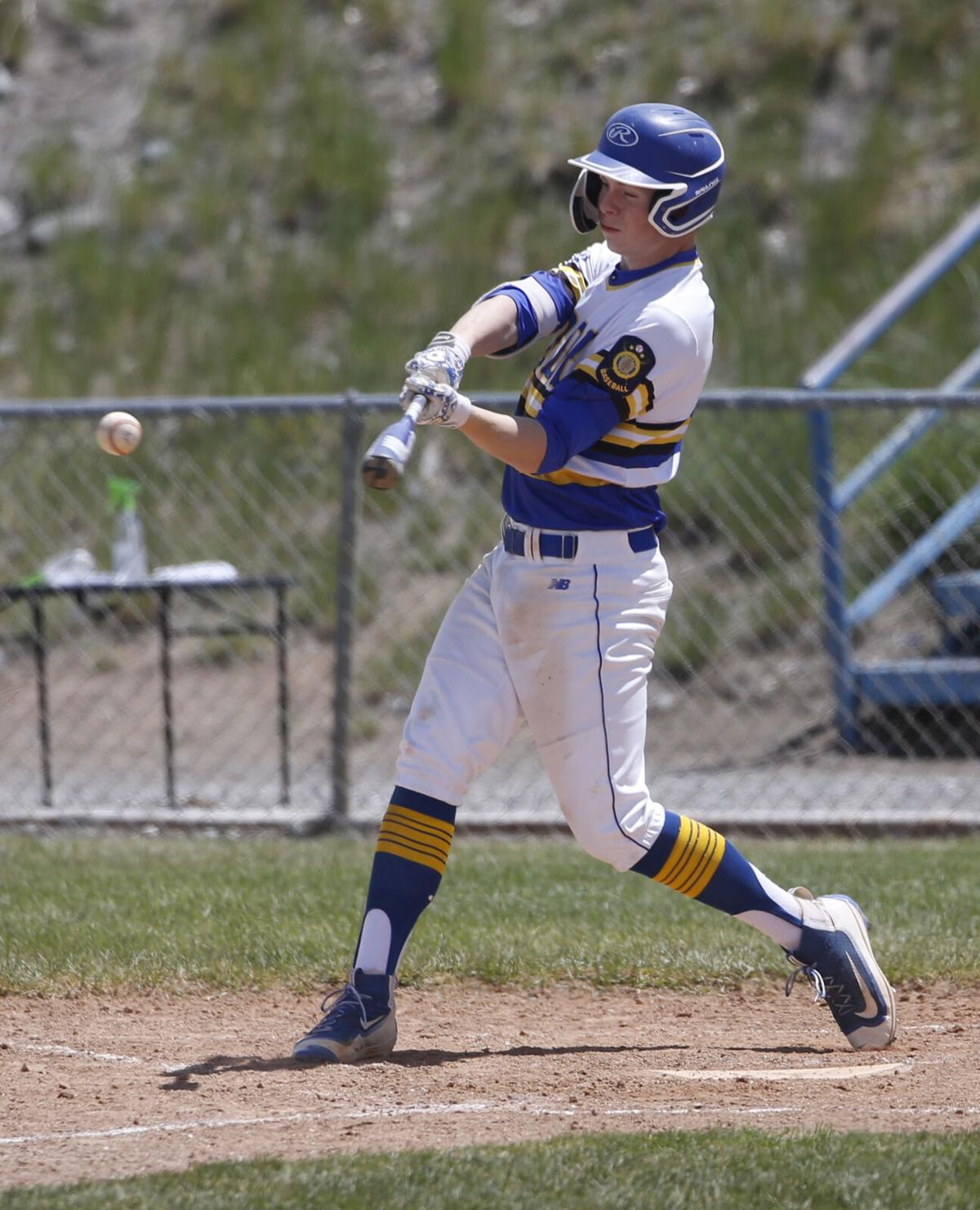 Cody Phillips gets a hit against Belgrade. 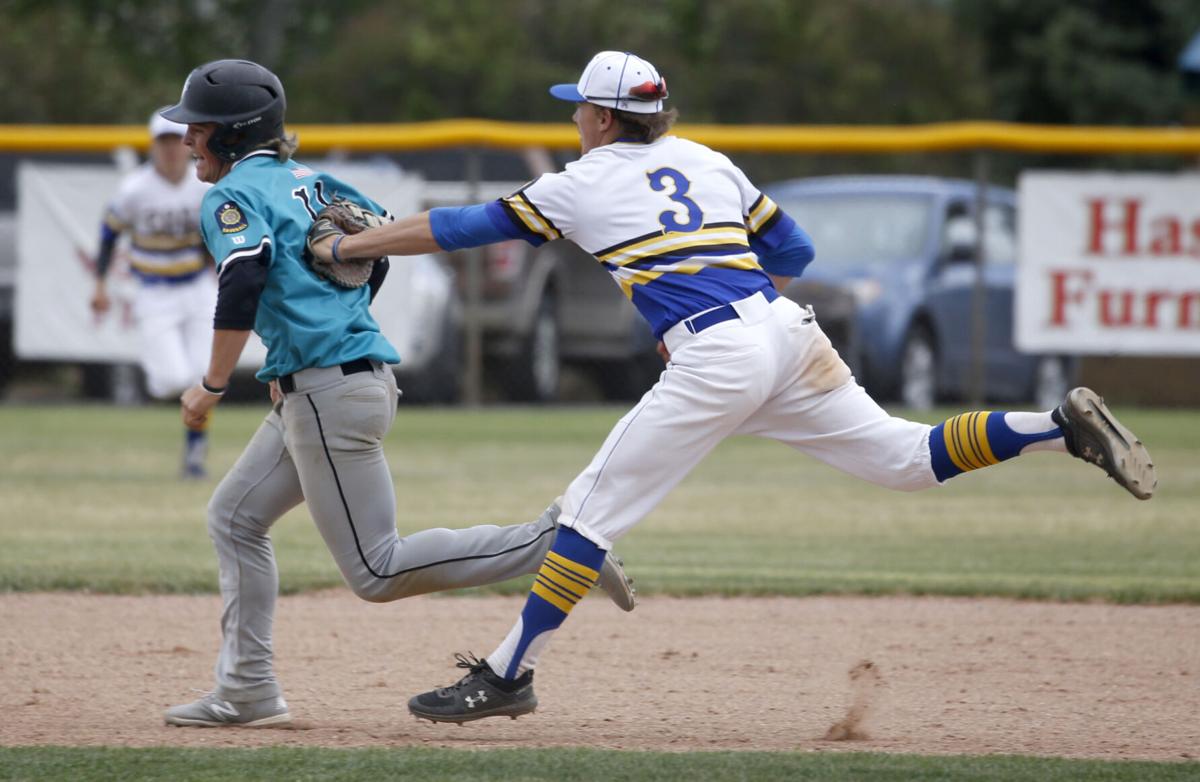 First baseman Jared Grenz tags out a Belgrade base runner after he was caught off the bag. 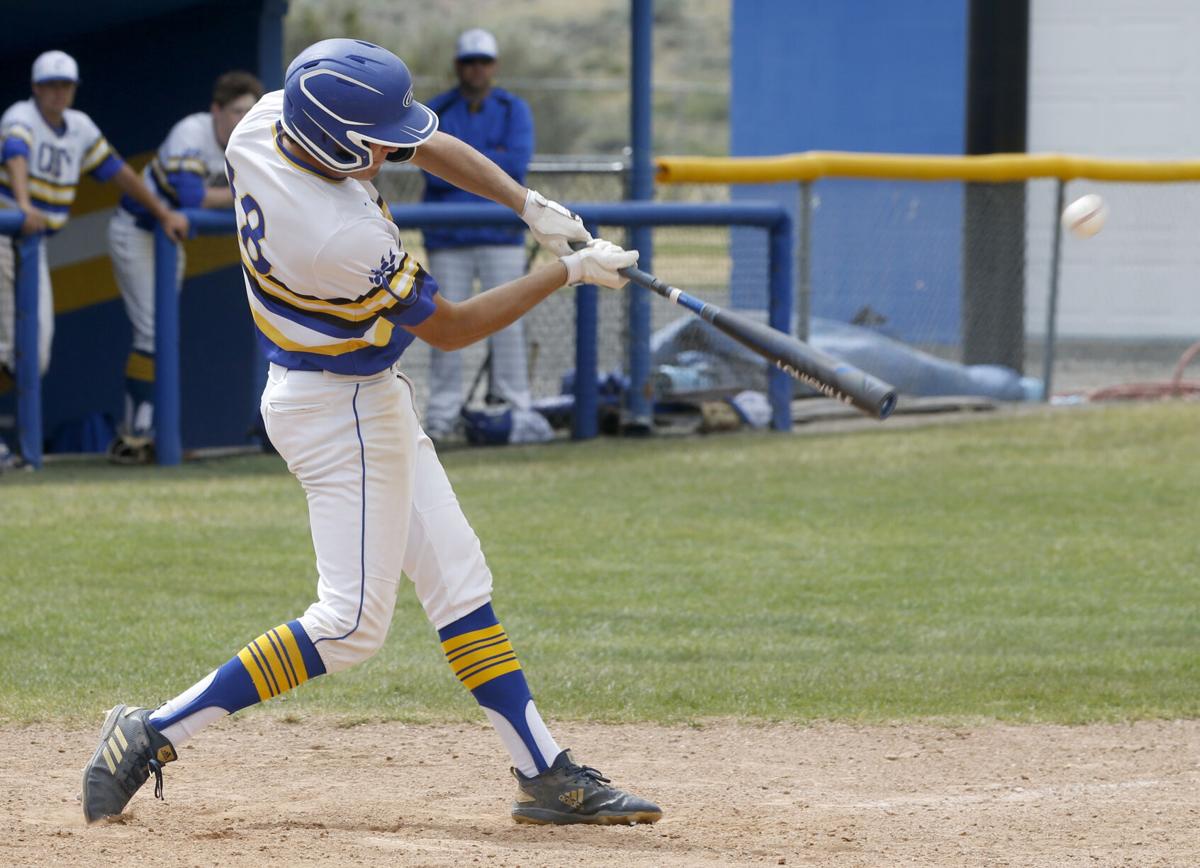 Tristan Blatt hits a home run in the second game. 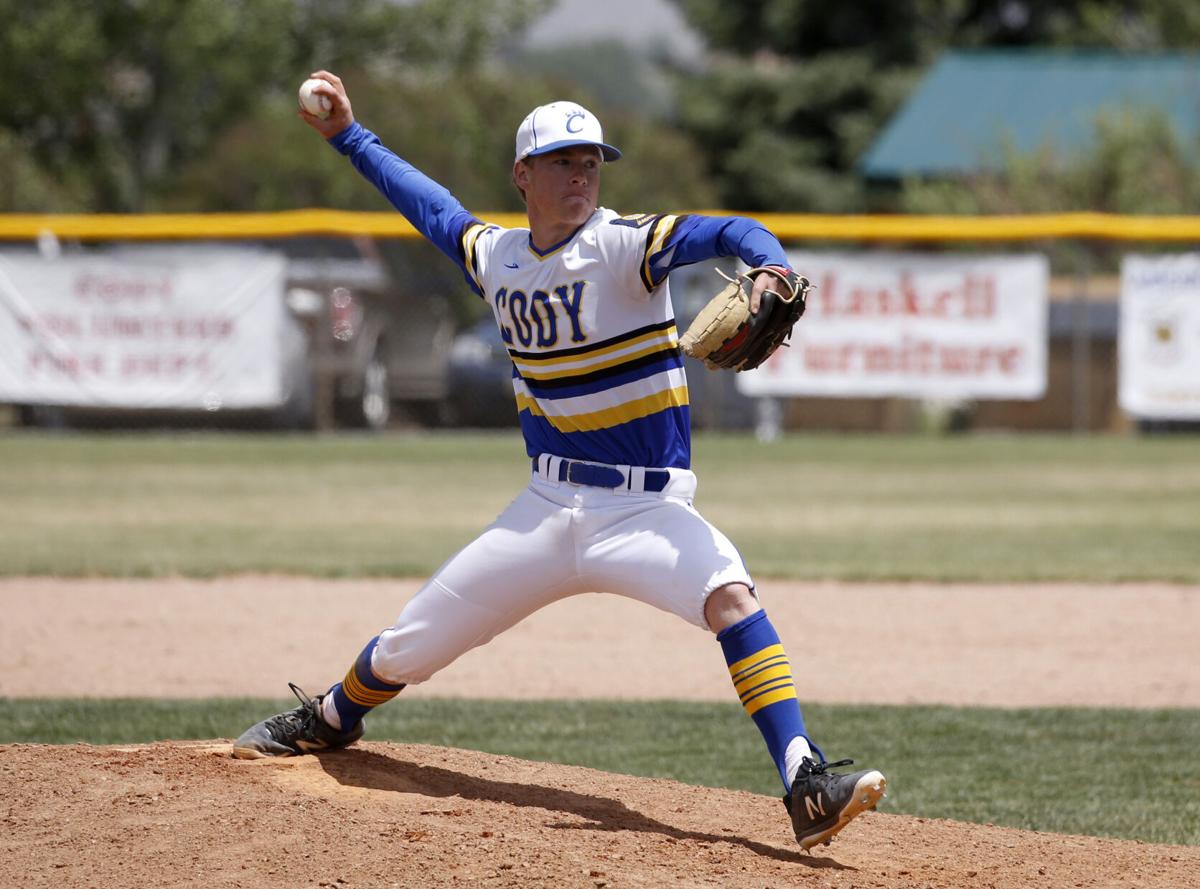 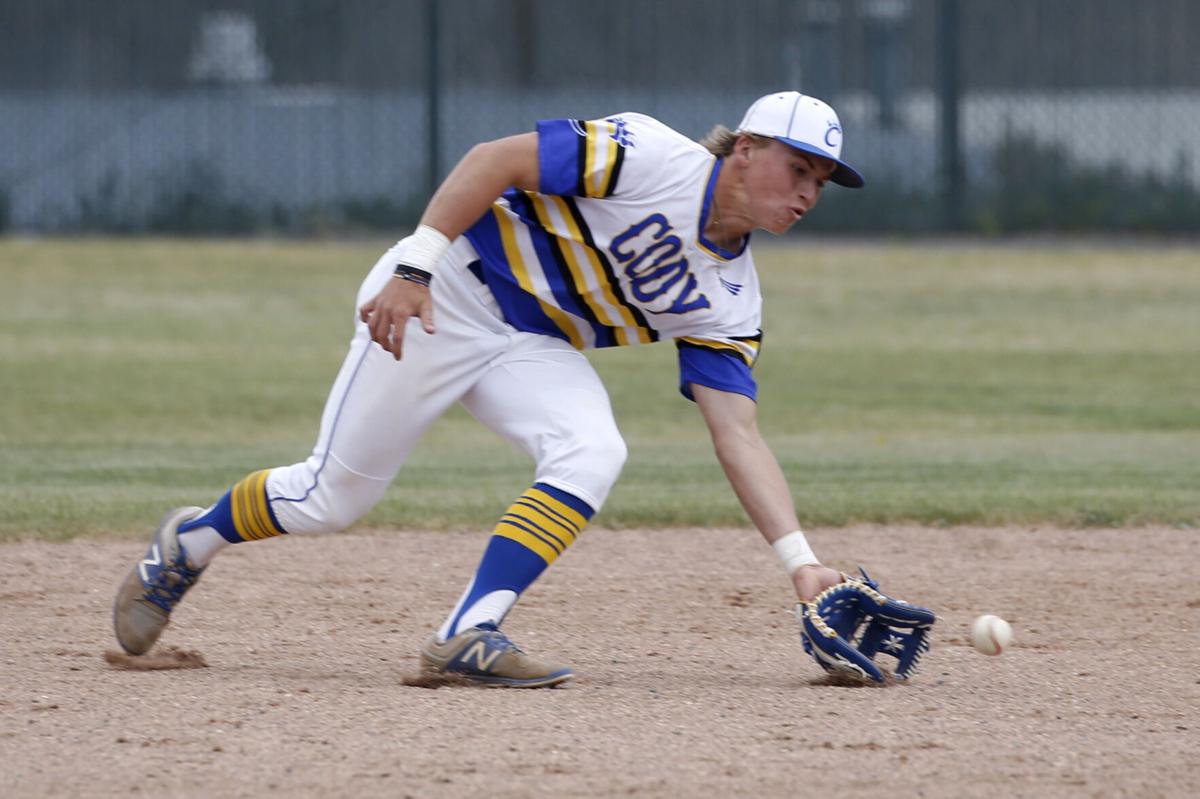 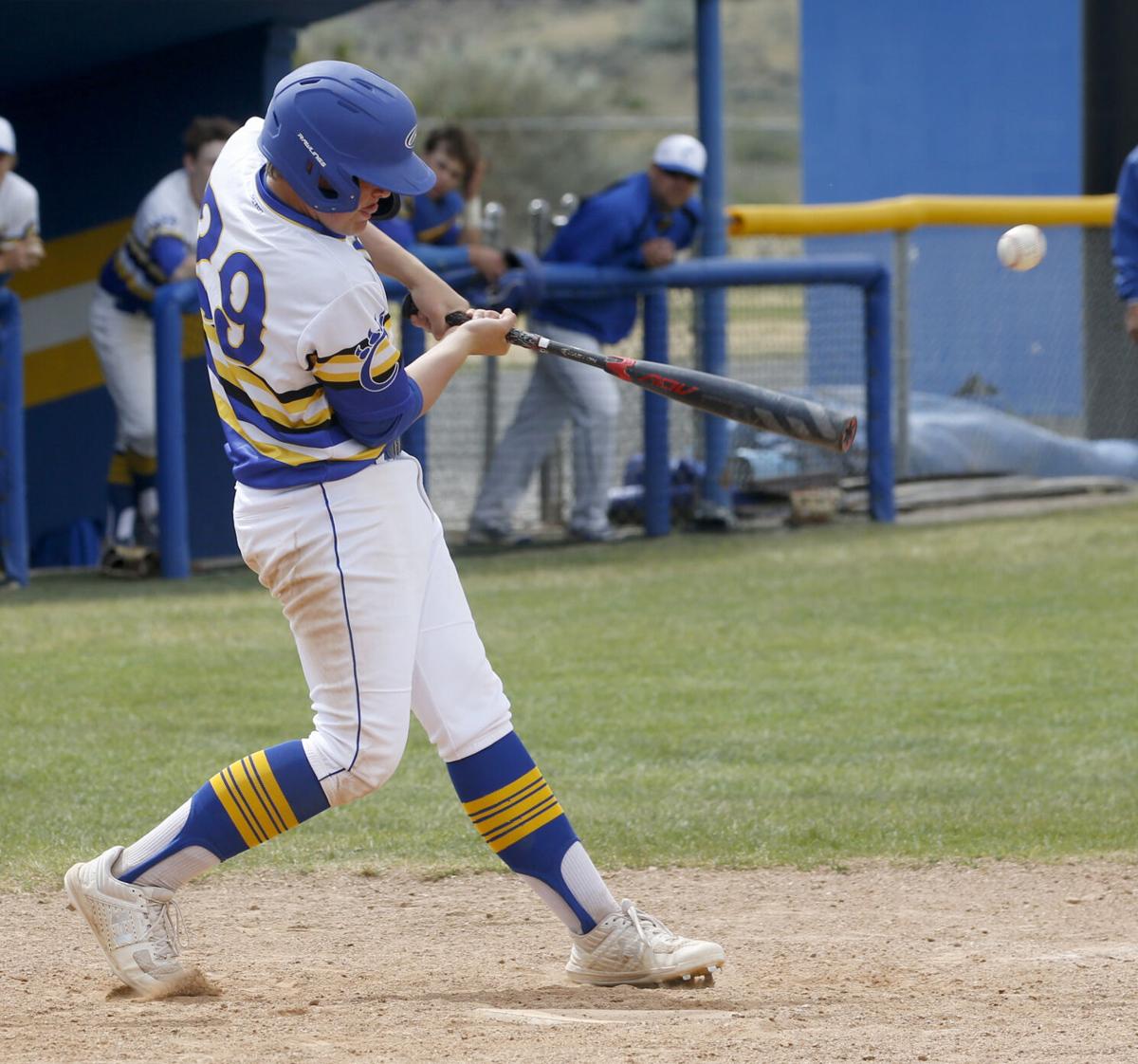 Dominic Phillips connects for a single. 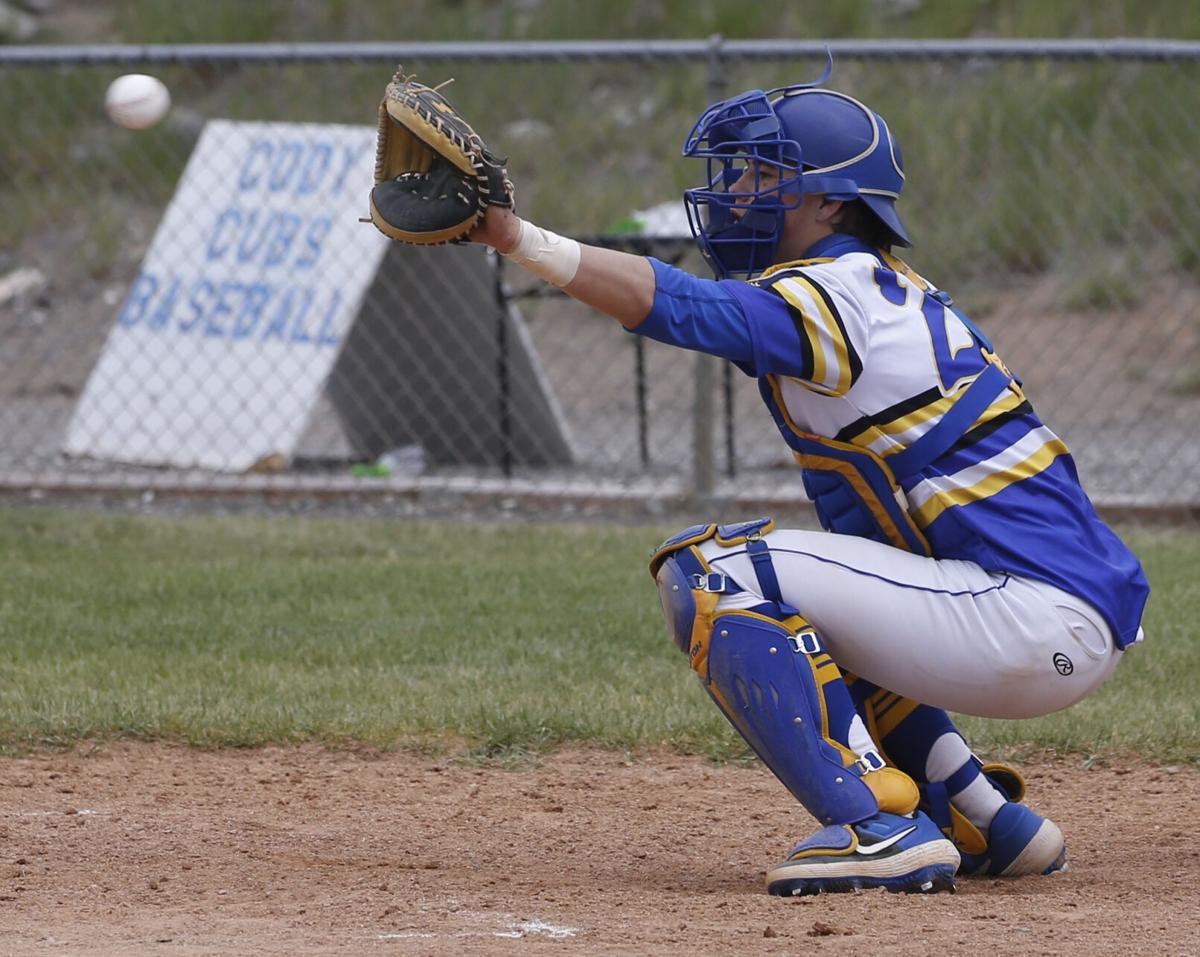 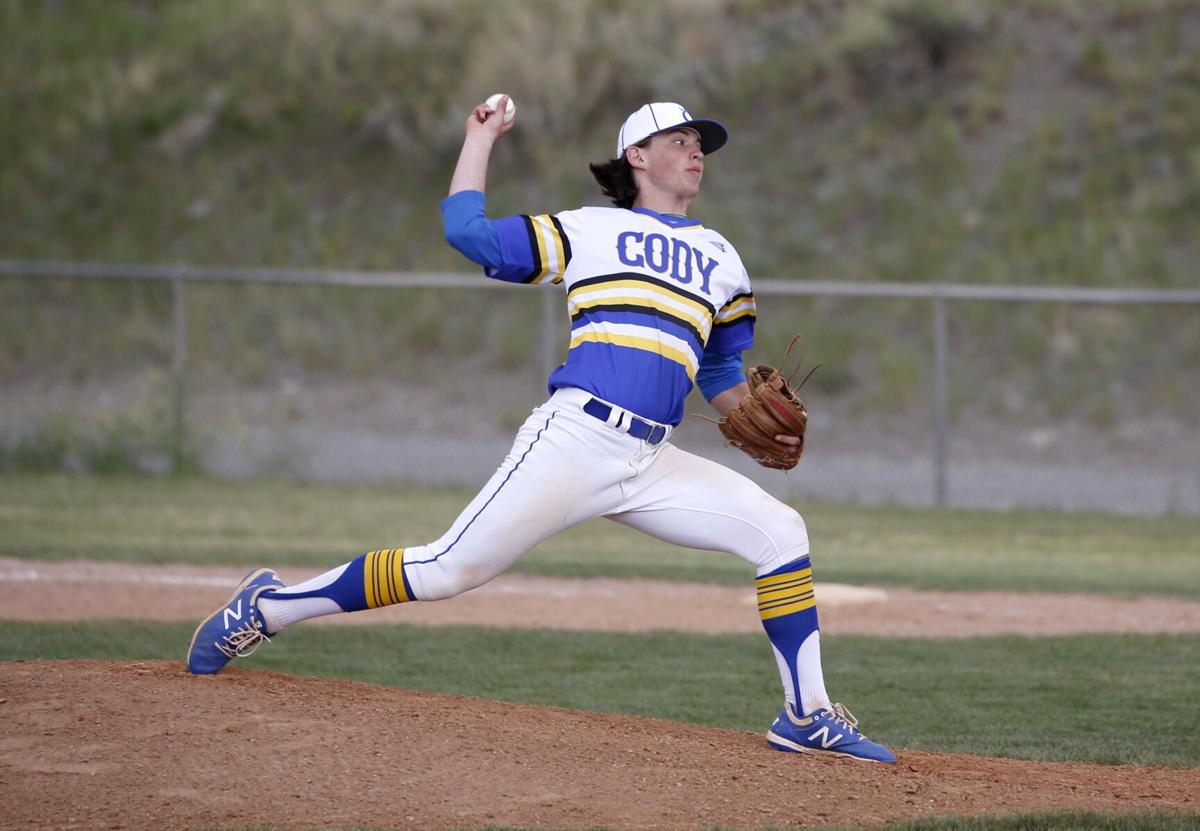 Cody Phillips gets a hit against Belgrade.

First baseman Jared Grenz tags out a Belgrade base runner after he was caught off the bag.

Tristan Blatt hits a home run in the second game.

Dominic Phillips connects for a single.

The Cody Legion baseball team fell to Belgrade by identical 12-11 scores in a doubleheader Sunday afternoon.

While the scores were the same the finishes were much different, with the Bandits coming from behind to win the first game in the final inning and the Cubs making a late run in the second.

“Belgrade is a fun team,” coach Bart Grenz said. “They are active on the bases, do the fundamentals well and are very disciplined.”

Cody (2-5 overall) led 11-7 in the first game going into the final inning, but a five-run seventh by the Bandits gave them the victory.

After scoring a run on a ground out, Belgrade had two on with two outs. A single scored another run and then a three-run shot over the centerfield fence gave the Bandits the lead. Cody had two on in the bottom of the frame but couldn’t push any runs across.

“Belgrade is going to make you play every pitch and if you’re not ready they’re going to take advantage,” coach Grenz said.

To start the game, Belgrade took a 2-0 lead in the second inning. Cody got one back, scoring a run after singles by Tristan Blatt, Tyler Grenz and Dominic Phillips.

The Bandits extended their lead with three runs in the fourth, taking advantage of two walks and an error in the frame.

Cody answered with Blatt hitting a triple to start the bottom of the inning. Jack Schroeder and Tyler Grenz were both hit by pitches to load the bases and a run scored when Dominic Phillips was hit during his at bat.

Schroeder scored on a passed ball and two more runs came in on singles by Ethan Johnston and Cody Phillips to tie the game. After a single by Devyn Engdahl loaded the bases, Cody took the lead when Jared Grenz bunted and Belgrade overthrew first base. Grenz advanced to third on the throw. The final run of the inning scored on a sac bunt by Blatt.

Belgrade scored two in the fifth and the Cubs final runs came in the bottom of the frame when they loaded the bases on a single by Hayden Bronnenberg, walk and hit batter. The first run scored on a fielder’s choice and the second on a single by Engdahl.

Cody Phillips started on the mound and went 4 innings, giving up five runs on two hits. Bronnenberg pitched 2 2/3 innings and allowed seven runs on six hits. Grady McCarten came in and threw one pitch to get the final out.

Down 12-8 in the second game, the Cubs launched a late comeback that fell just short. Johnston hit a one-out single and Cody Phillips drew a walk. One run scored on a two-out single to left by Jared Grenz. Blatt then hit a triple that bounced off the centerfield fence to make it a one-run game, but Schroeder popped up for the final out.

“We were a play away from winning,” Blatt said. “We’re still a little rusty right now but it was good we had a chance.”

The Cubs took the lead to start the game, going up 1-0 after back-to-back triples by Jared Grenz and Blatt.

“I definitely struggled in my first few games but I’m getting back into it and glad I could help us out,” Blatt said.

In the second, Cody made it 3-0. Tyler Grenz started the inning with a double, Bronnenberg walked and Johnston hit a double to score a run. The second run scored on a sac fly by Cody Phillips.

The Cubs struggled to get out of the third and Belgrade took advantage, scoring six to take the lead.

It didn’t take long for the Cody to get a few of those runs back. Jared Grenz walked and then Blatt hit a two-run homer to left to make it 6-5.

“I knew I’d hit it pretty good and thought it had a chance,” Blatt said.

Tyler Grenz then drew a walk, Dominic Phillips hit a single and the tying run scored on a double by Bronnenberg. Cody regained the lead on a fielder’s choice.

Four walks in the fourth hurt the Cubs as Belgrade regained the lead and went up 9-7. Taking advantage of two Cody errors, the Bandits scored two more in the fifth. Their final run came on another Cody error in the sixth.

“We need to keep working on things we know how to control when things start to go bad so they don’t snowball on us,” Grenz said.

Cody scored one run in the fifth after Tyler Grenz hit a double and eventually scored on an error.

“We definitely can take away that we need to do better defensively and be ready every pitch and focused on getting outs,” Blatt said.

“I believe we showed a lot of improvement from the first games,” coach Grenz said. “We’re still trying to find our identity and what type of intensity will allow us to play our best. The great thing about it is we have a lot of games left and time to figure that out.”

Cody hosts Lovell on Wednesday at 5 and 7 p.m.