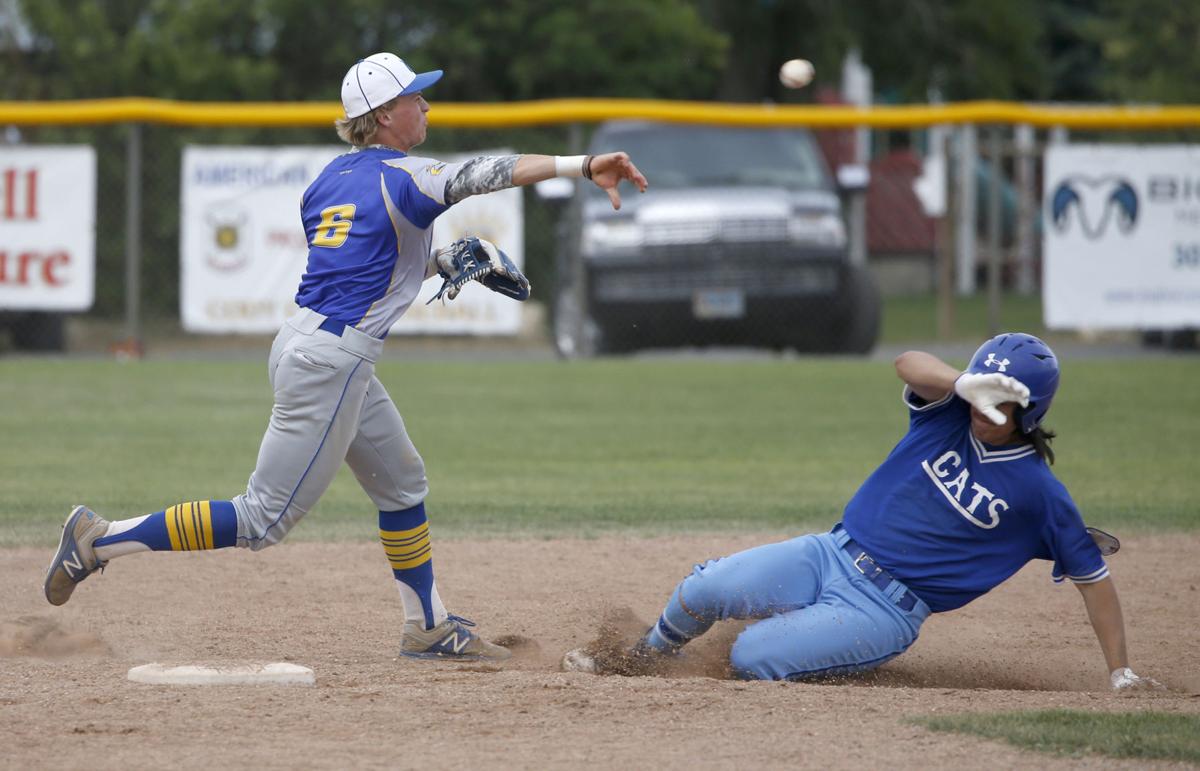 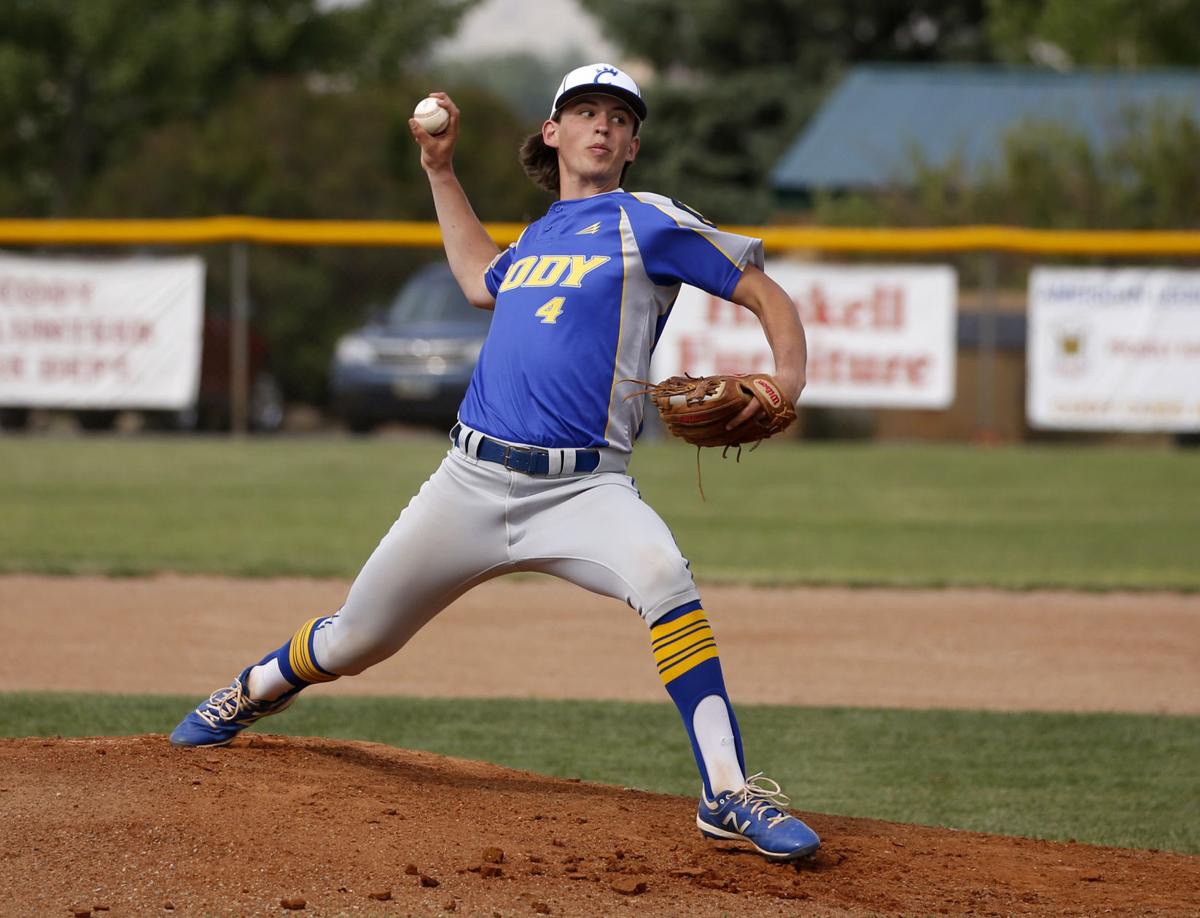 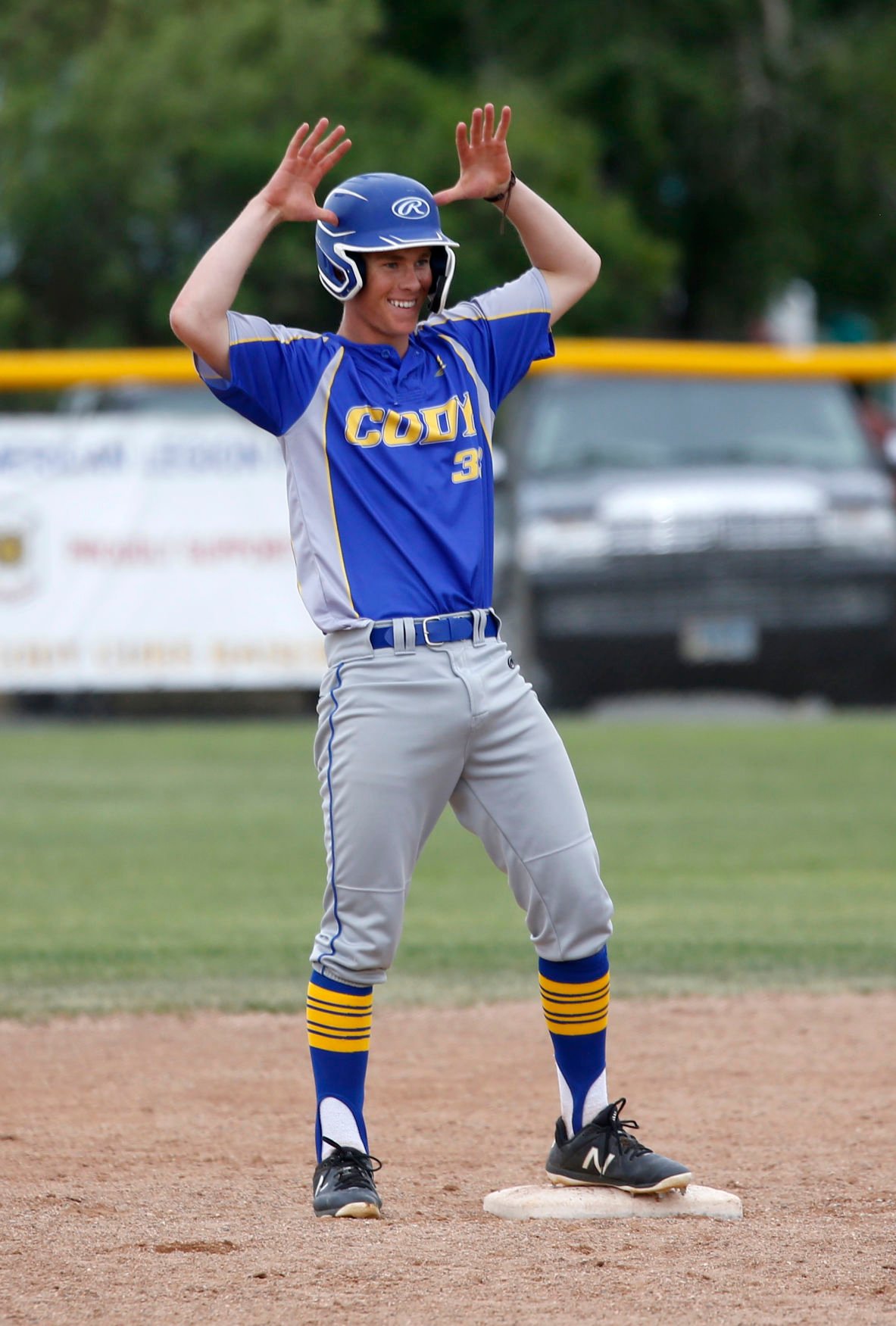 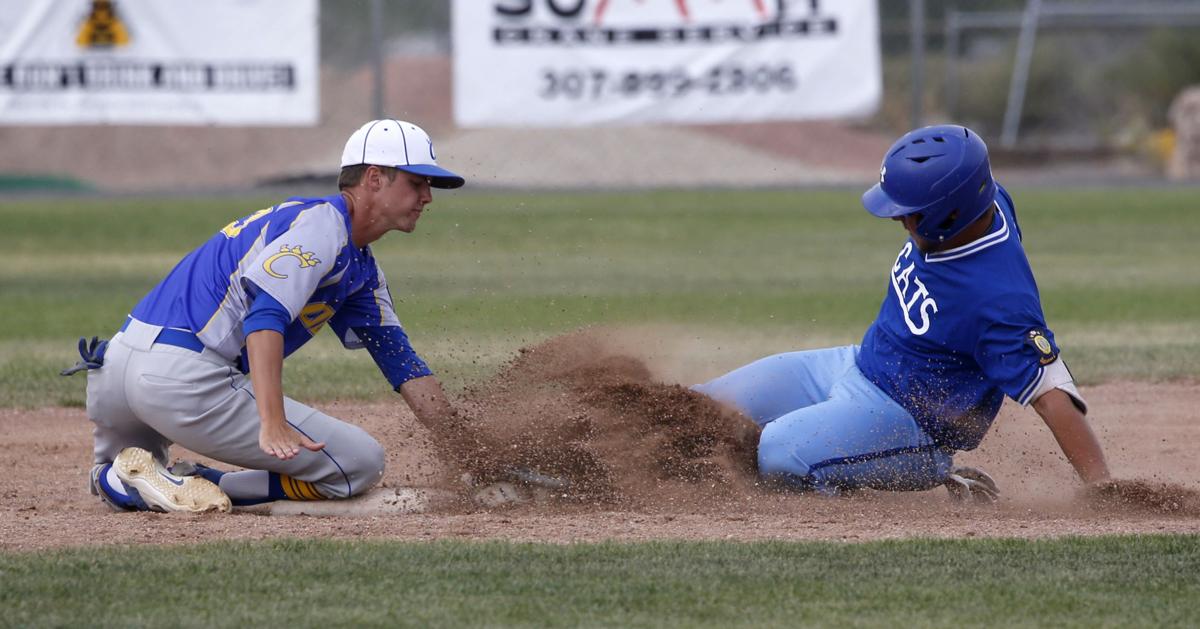 Ethan Johnson tags a Douglas runner at second base. 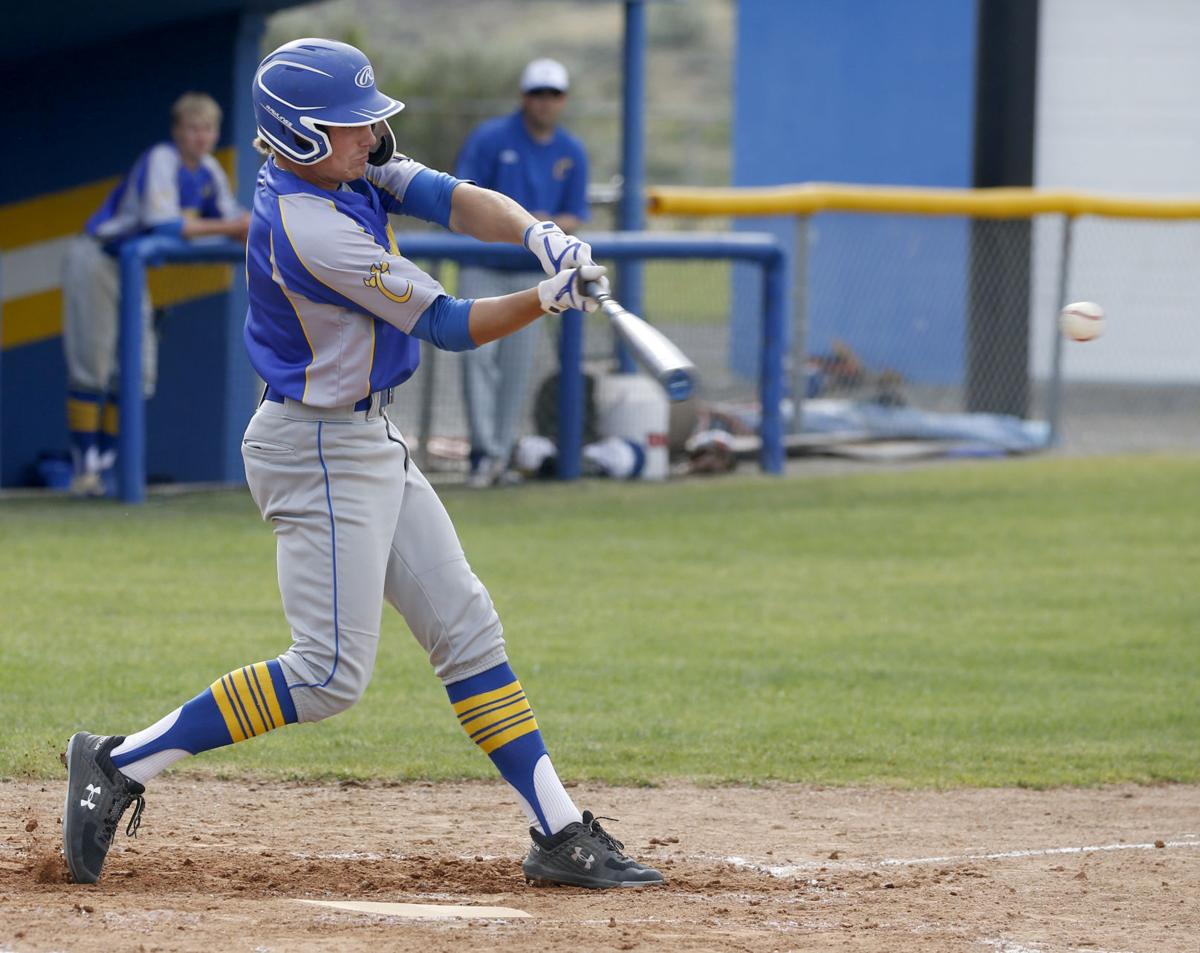 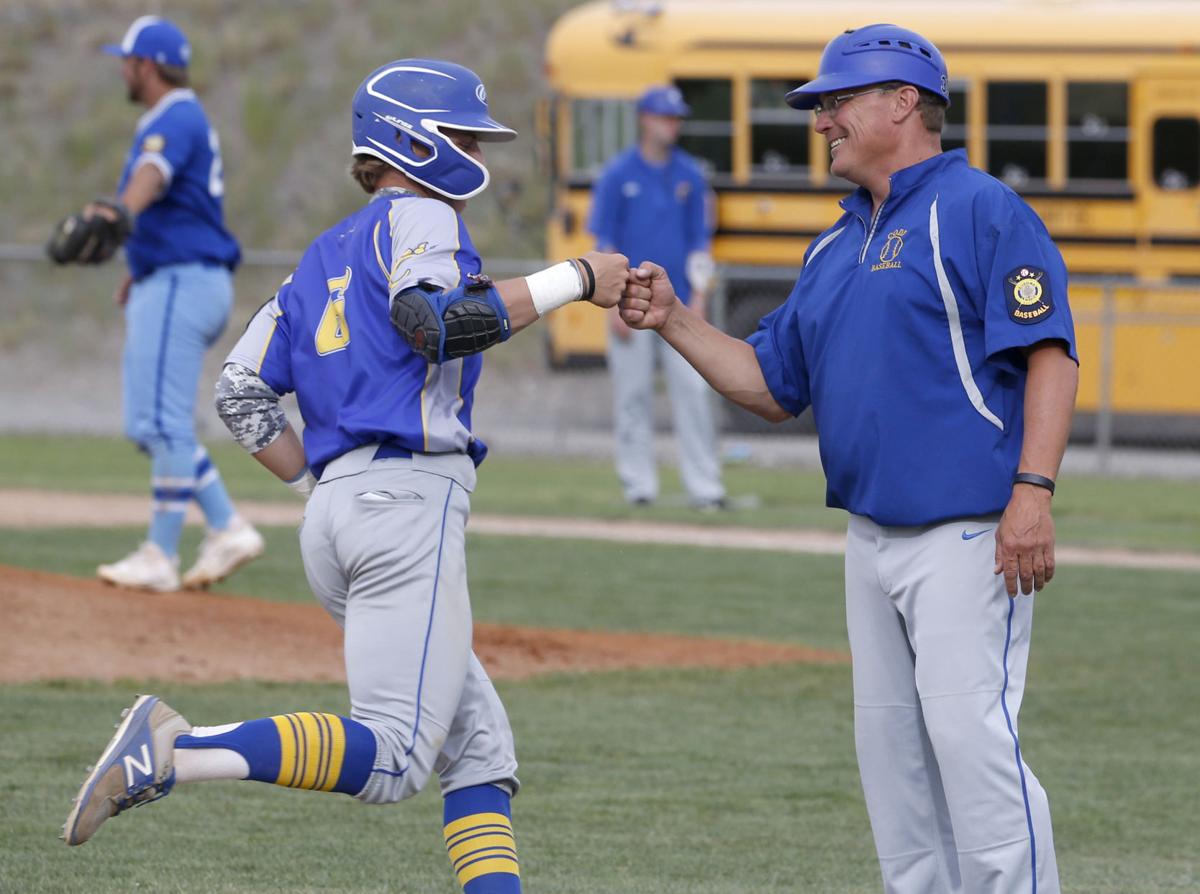 Tyler Grenz gets a first bump from coach Bart Grenz after he hit a two-run home run in the sixth. 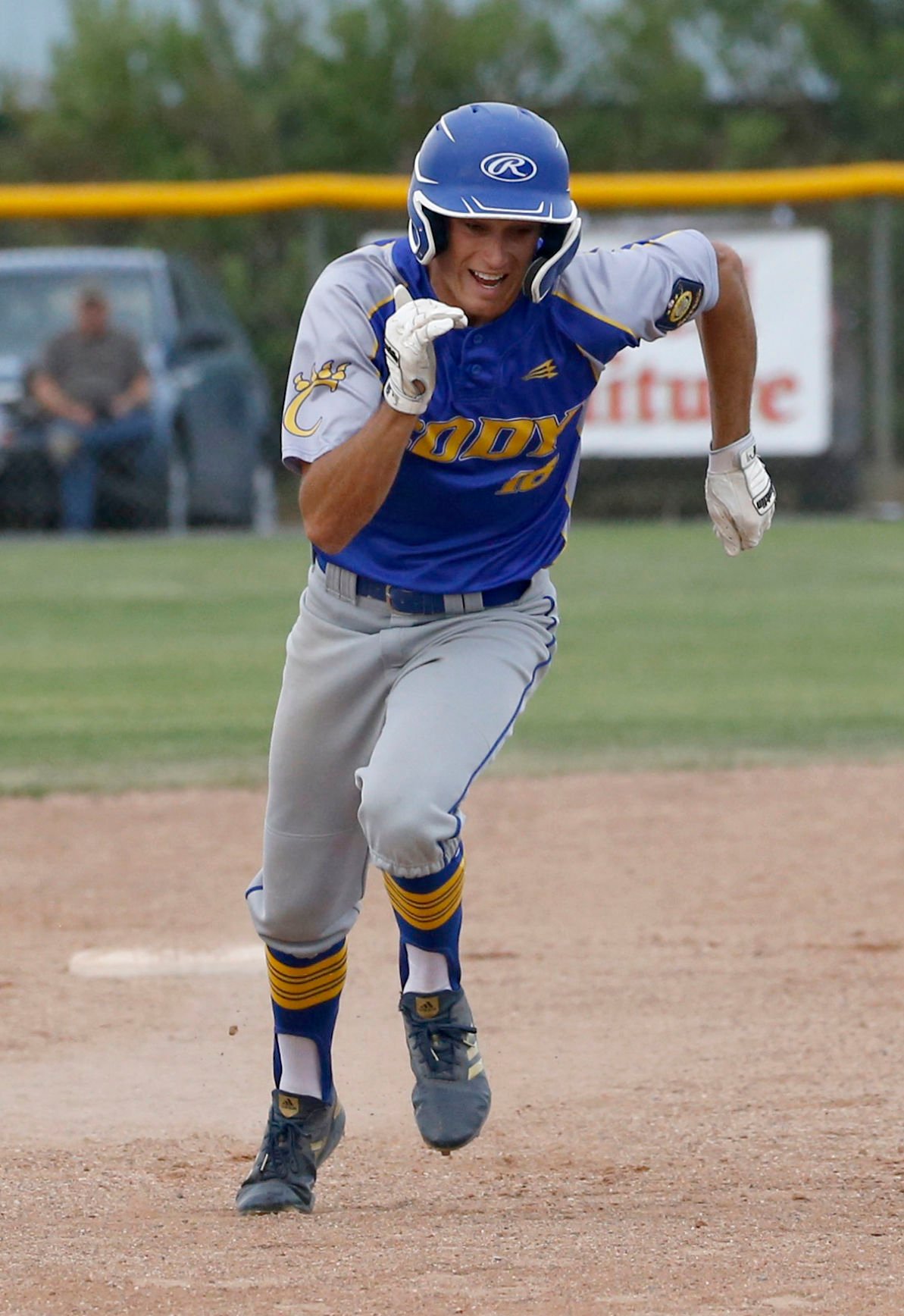 Tristan Blatt takes off to third base. 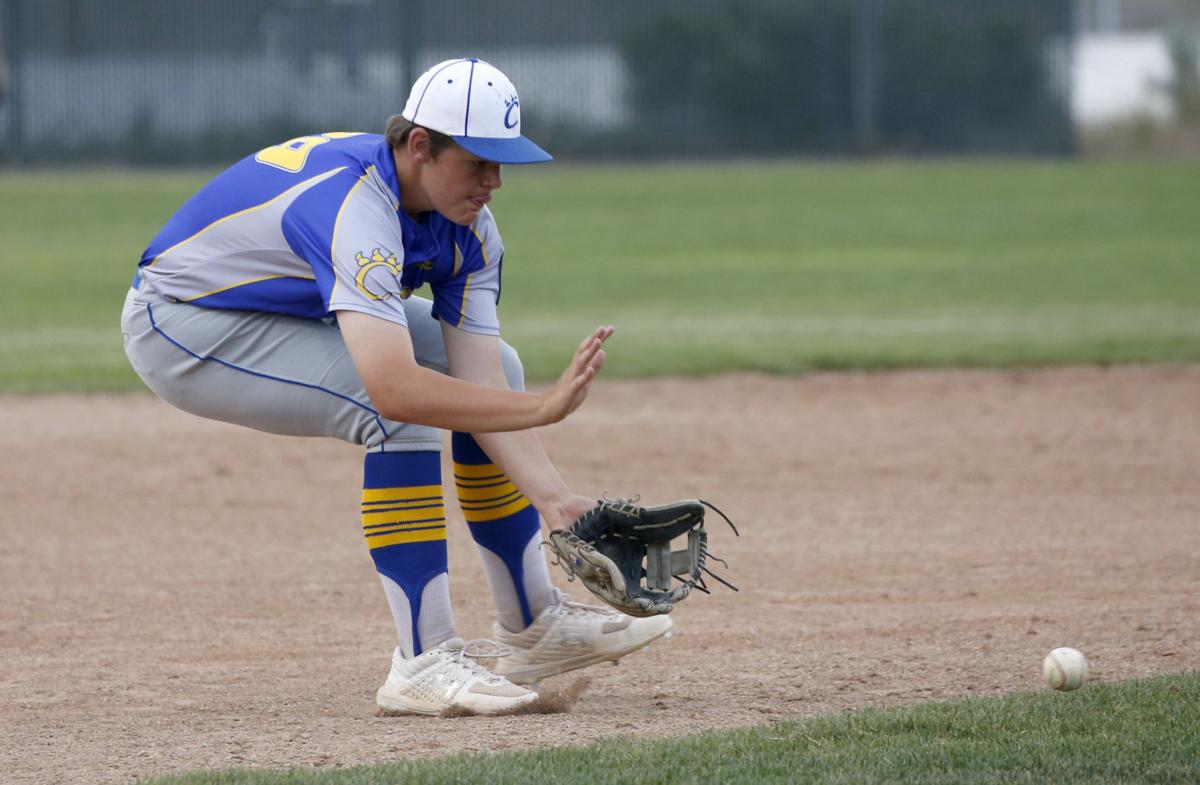 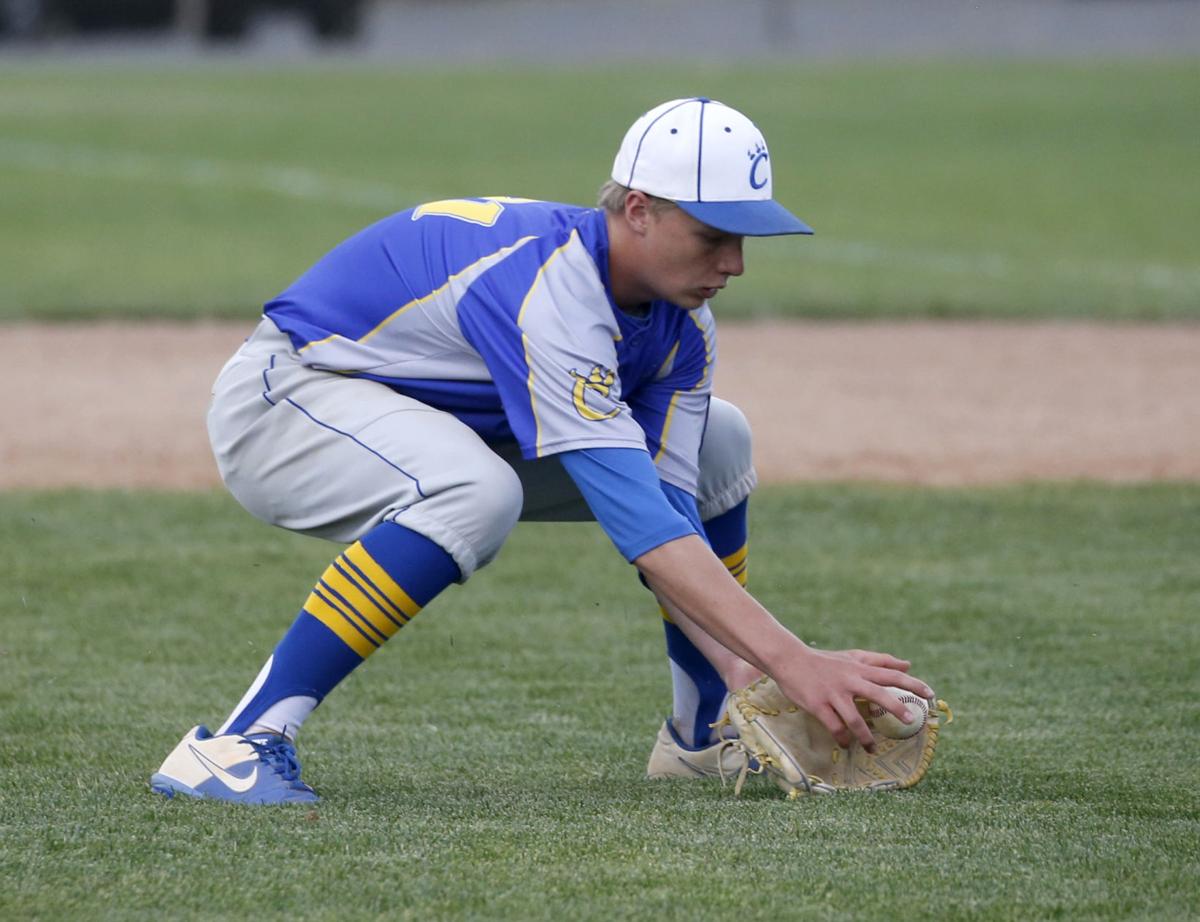 Ethan Johnson tags a Douglas runner at second base.

Tyler Grenz gets a first bump from coach Bart Grenz after he hit a two-run home run in the sixth.

Tristan Blatt takes off to third base.

The Cody Legion baseball team did the things it needed to do to be successful in a sweep of Douglas on Monday.

“Those are the two most complete games we played all year,” coach Bart Grenz said. “We had solid pitching, good defense and timely hitting throughout and we really looked good and had the right mental attitude.”

The Cubs (6-9 overall) were much improved from the weekend, where they struggled and went 0-4.

“Our seniors really stepped up after the weekend and we all came together and set team goals,” Devyn Engdahl said. “As a team we are all starting to click and play together. We knew we were good, we just had to put it all together.”

A big second inning helped power the Cubs to a win in game one.

With two outs, Cody loaded the bases with a single by Grady McCarten and two walks. Tyler Grenz then hit a single to left to score the first run. Two walks brought in two more and three scored on a double to right by Hayden Bronnenberg to make it 6-0.

“Getting all of our runs with two outs shows that we do not give up easy,” Bronnenberg said. “No matter what the situation is we’re going to try and overcome.”

Cody went quiet until the sixth, when Chance Moss reached on a single. With two outs, Tyler Grenz hit a two-run dinger over the right field fence, his first home run in Legion.

“I felt like I made good contact and I knew it had a chance,” he said. “I saw it go out before I rounded first and I felt really good to finally be able to have all the hard work pay off.”

The Cubs had a few errors during the game, but unlike the weekend they minimized the damage. On one play in the sixth inning, Douglas’ Michael Bobrowski reached on an overthrow of first base, but catcher Jack Schroeder was backing up the play and caught Bobrowski trying to steal second.

“We have really been focusing on being ready every pitch,” Bronnenberg said. “Errors will happen, but as long as we stay focused the errors shouldn’t snowball.”

“I thought offensively we had good at-bats in every inning even though we didn’t always put up runs,” Grenz said. “It was good to see us swing the bat well with two outs and two strikes.”

Engdahl threw a complete game, giving up just four hits in the shutout.

“Devyn looked sharp on the mound,” coach Grenz said. “He really looked comfortable and did a great job mixing his pitches.”

Engdahl was happy with his performance and said he had a lot of confidence on the mound.

“Jack called a great game and helped keep the hitters off balance by having me extend the strike zone and pitch backwards against the Douglas hitters so they could not get my timing down,” Engdahl said.

The Cubs earned a walk-off win in the second game.

“Offensively we carried our strong performance from the first game,” coach Grenz said. “We had a hard time getting runs across the plate in some innings. But the kids maintained composure even when we were down and it was good to see us have a solid approach in the seventh inning.”

Tied at four in the final frame, Bronnenberg started things off with a double to left. Engdahl then stepped in and hit a single to left to score the winning run.

“When Hayden was on second base and I came up, I was telling myself to not try to do too much,” Engdahl said. “Driving in the winning run felt super good and really boosted my confidence, which I needed because I had been in a slump.”

Cody was quick to get on the scoreboard to start the game, taking a 1-0 lead in the first inning when Jared Grenz hit a double, stole third and scored on a Douglas error.

The Cubs made it 2-0 in the second inning after Engdahl hit a single, stole second and scored on a single by Phillips.

Douglas’ runs came in the third, all with two outs. The Bearcats had three singles and a double in the inning.

“I was confident that we would come back the second game,” Bronnenberg said. “They scored all of their runs in one inning while we had scored almost every inning up until that point. I knew and so did our team that we could score a few more before the game was over.”

Cody got one back in the bottom half when Blatt hit a single and scored on a double by Bronnenberg.

With two on base and two outs in the sixth, Cody tied the game on a single by Phillips.

Douglas had two on in the seventh but couldn’t score.

McCarten, making his first start of the year, went 3 innings and gave up four runs on five hits. Blatt pitched 3 2/3 innings, giving up no runs on two hits. Johnston pitched 1/3 of an inning for the win and gave up no hits.

“It was good to get Grady a start on the mound,” coach Grenz said. “We will definitely use him more though the year and will look for him to get a little more comfortable.”