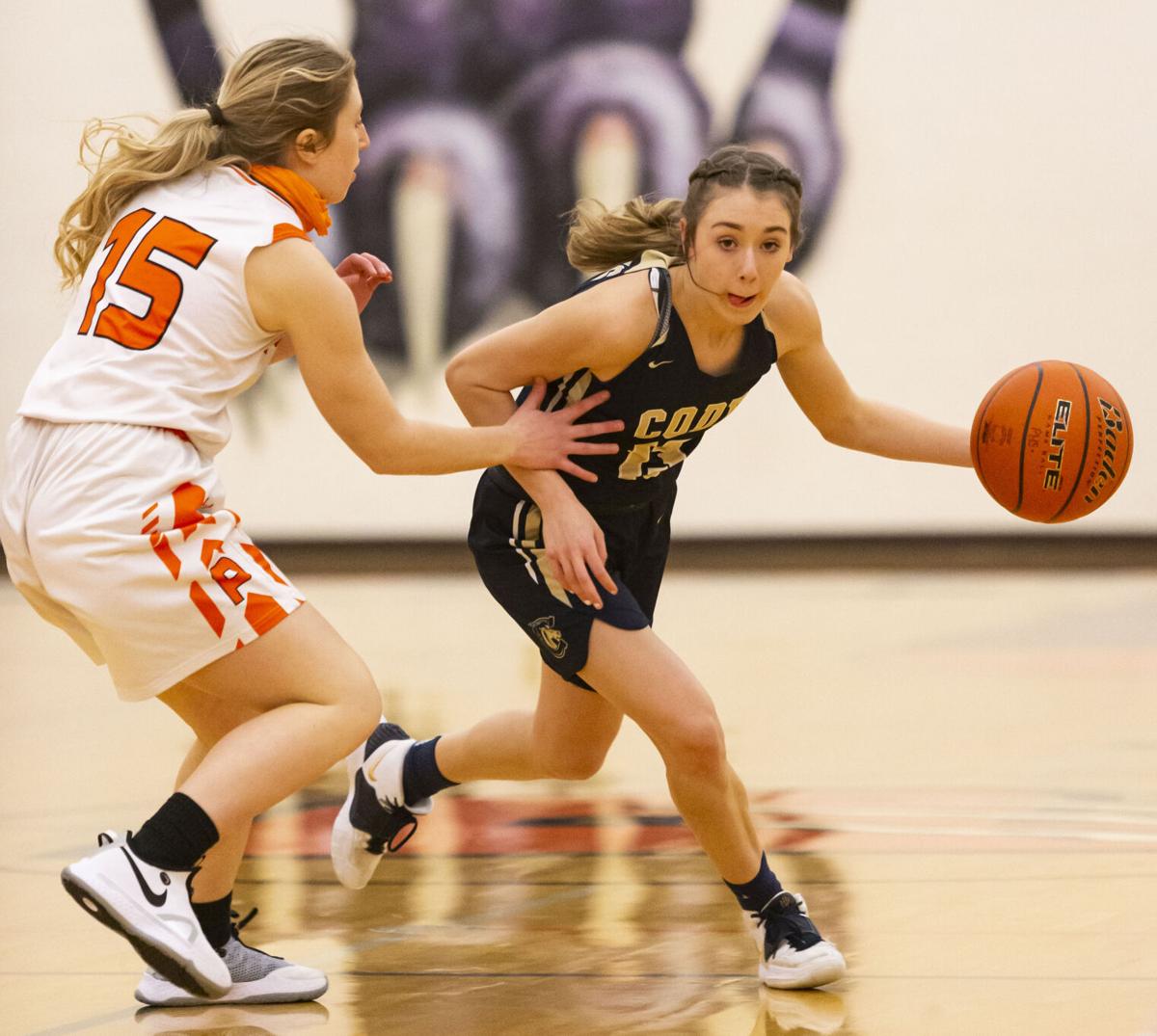 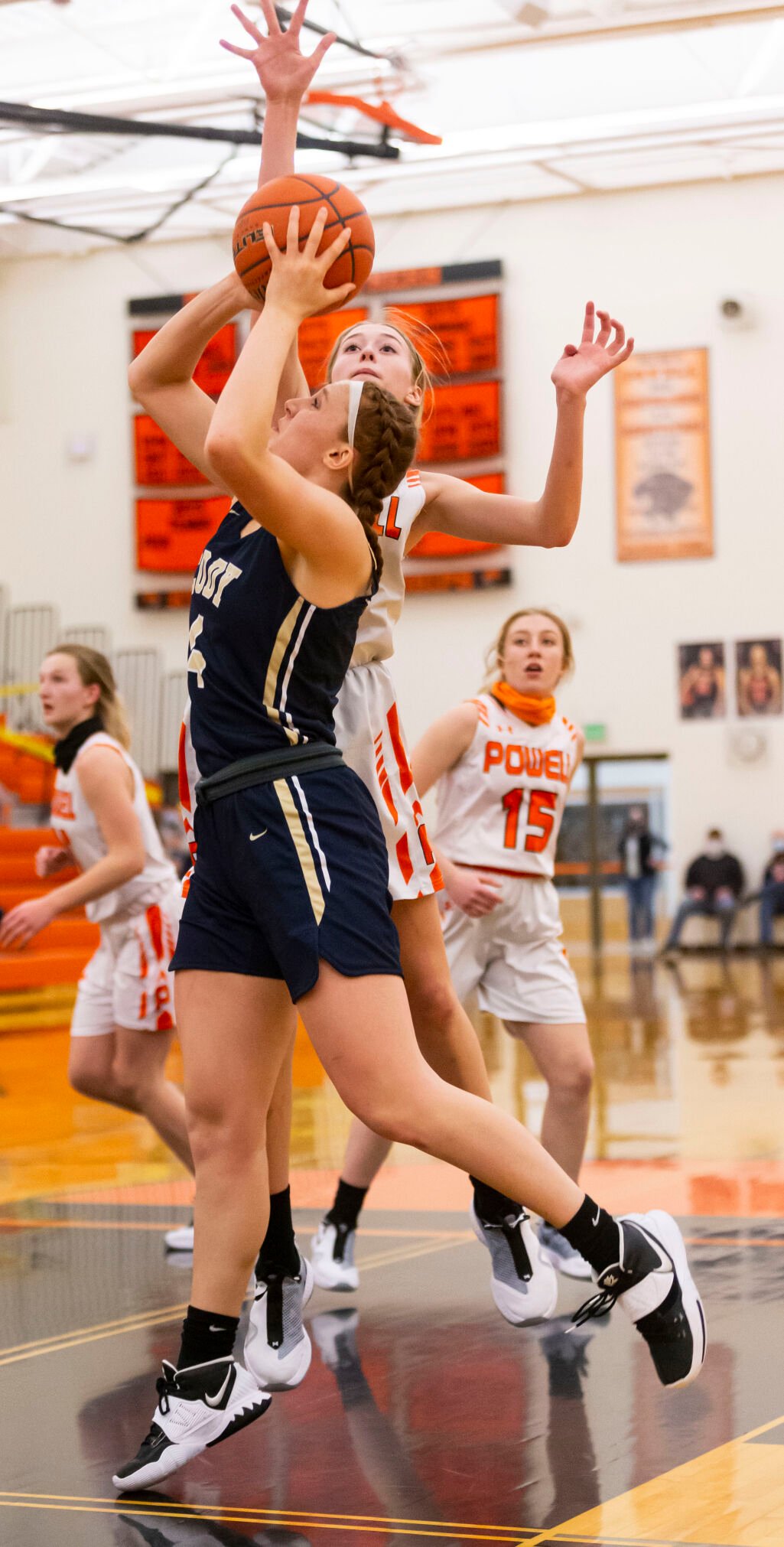 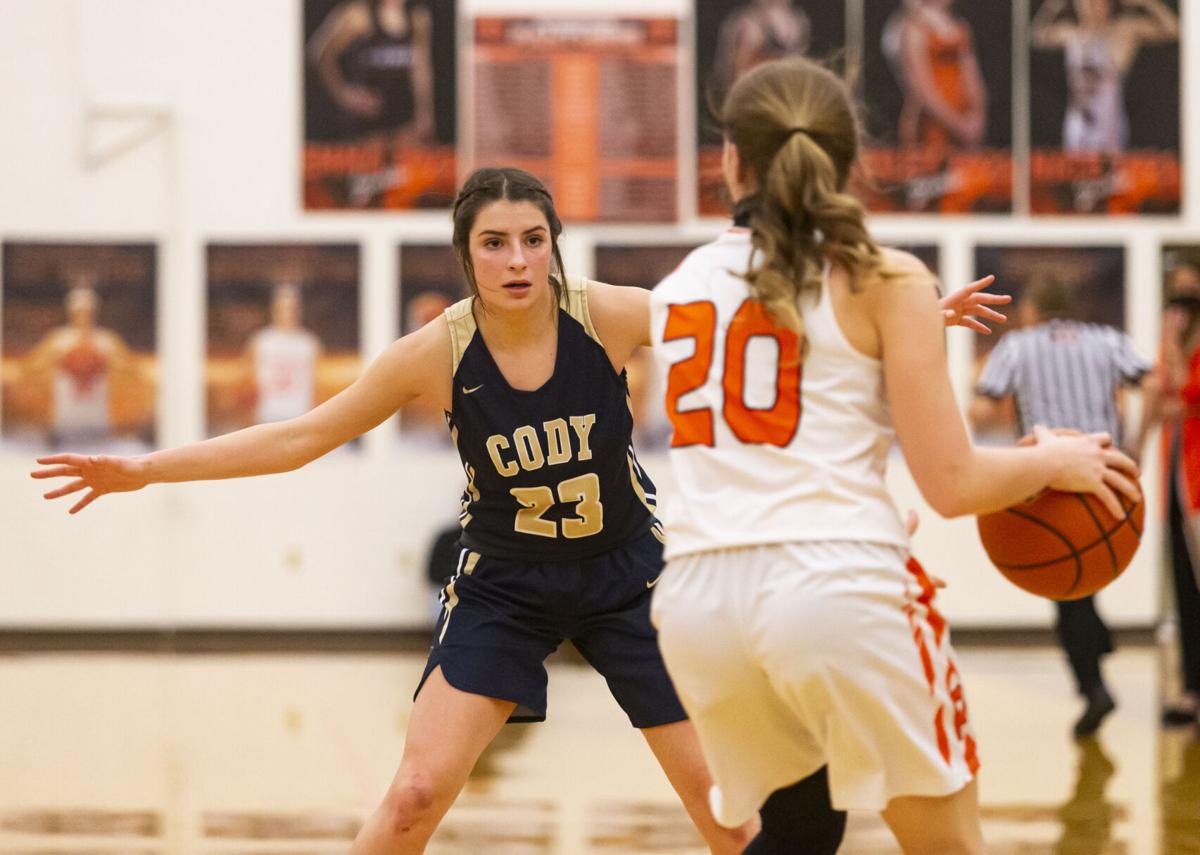 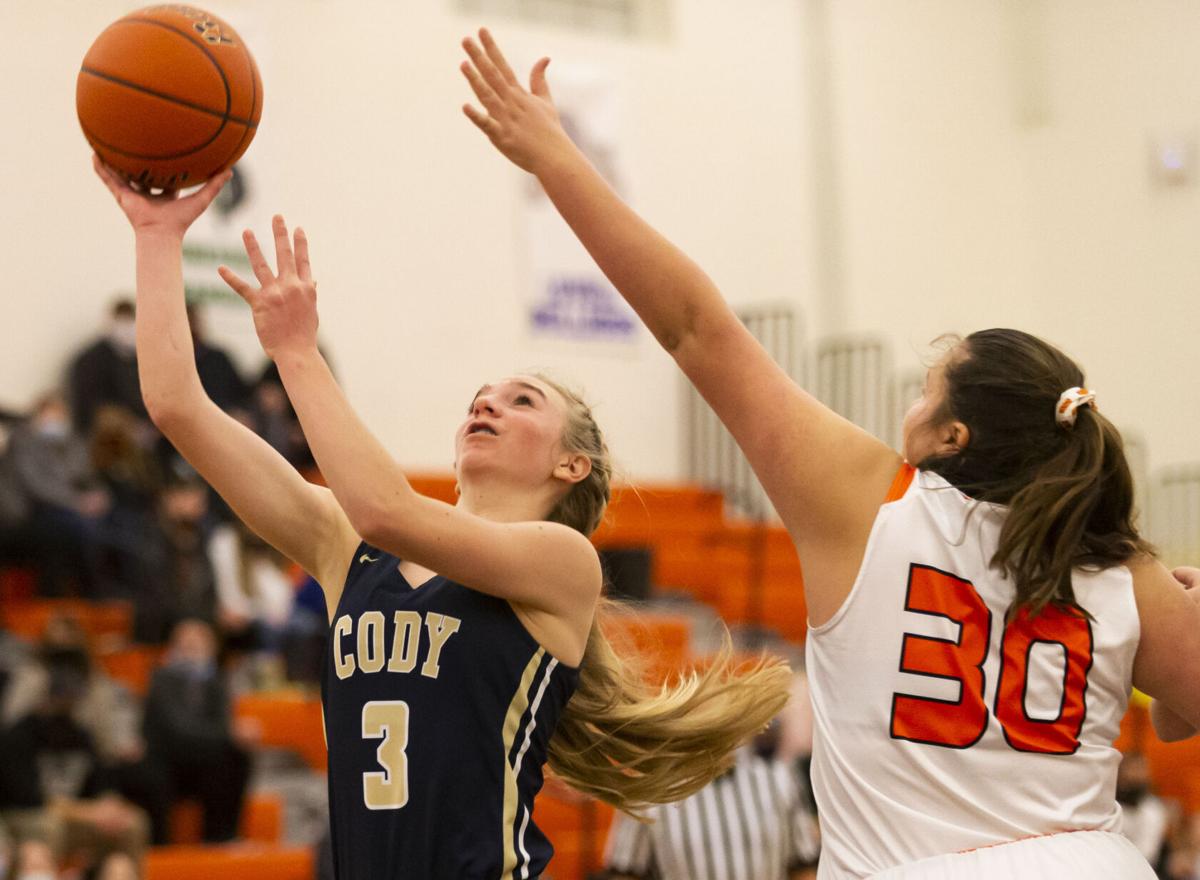 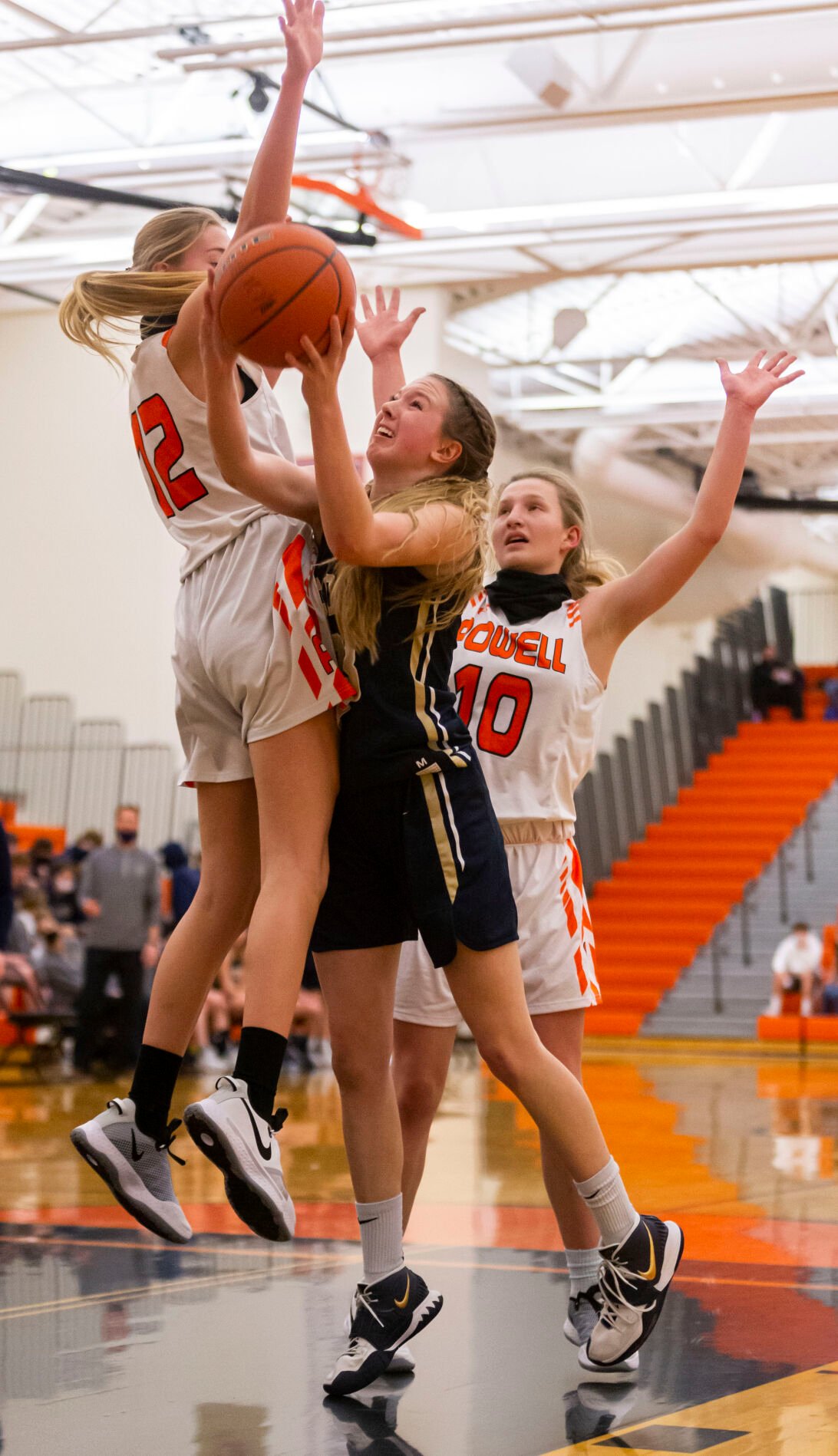 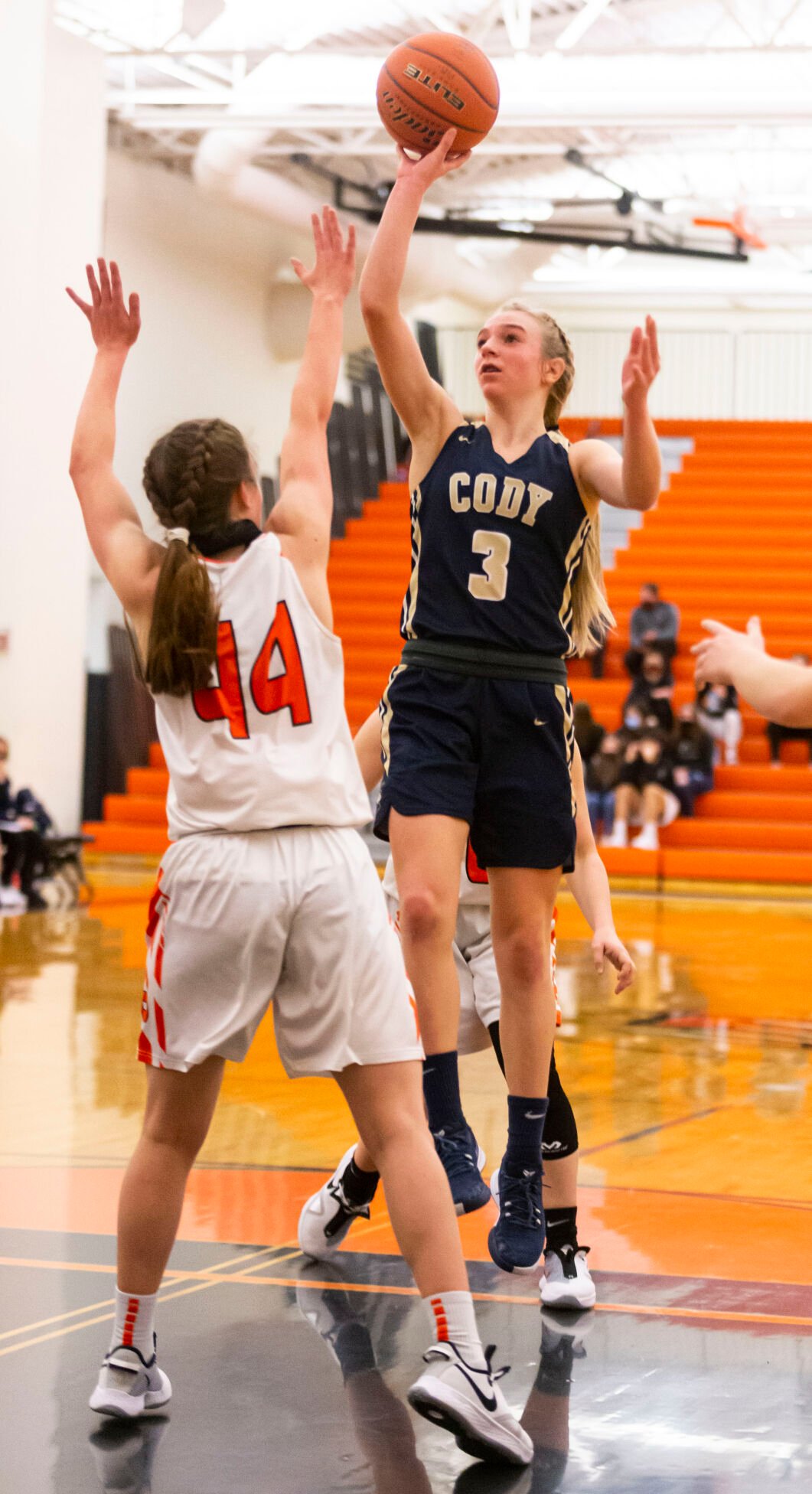 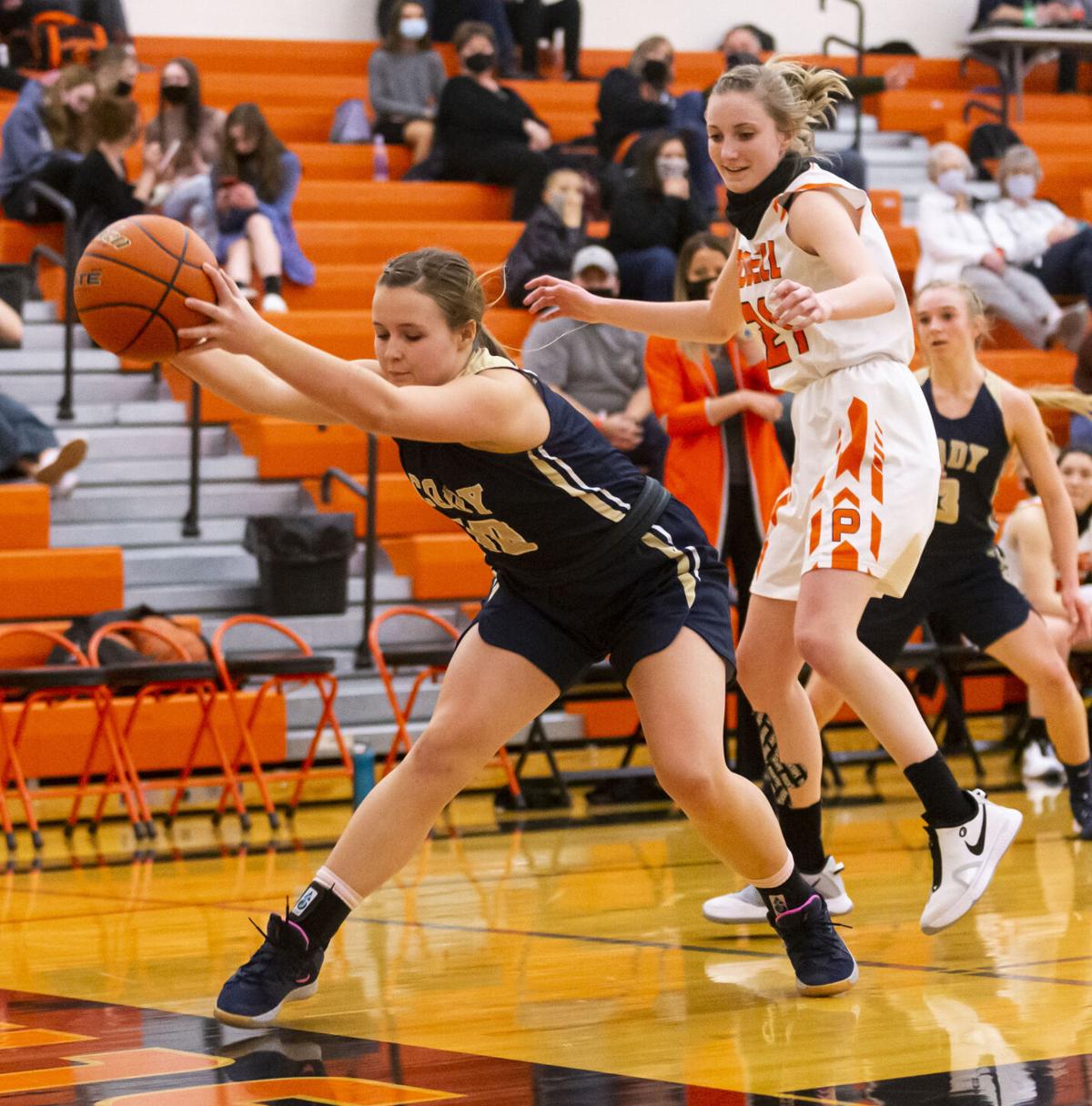 Allyson Schroeder keeps the ball in bounds against Powell’s Hailee Hyde on Saturday.

Allyson Schroeder keeps the ball in bounds against Powell’s Hailee Hyde on Saturday.

On Saturday, the well-rested Fillies, also taking a weekend break from the 4A schedule, defeated a persistent Lady Panthers squad 52-28 in Powell.

While Cody led from late in the opening quarter onward, the Lady Panthers kept it too close for comfort until late in the third.

“It’s always nice to play Powell, they’ve been a big rival for us,” Niemann said.

Neither team could muster much offense early in the game, with Powell ahead 2-1 with all points made on free throws halfway through the first. The Fillies (9-2, 2-1 conference) found some rhythm in the final four minutes of the opening quarter, with Hays sinking a running jump shot at the top of the key. She deploys her “floater” at key moments.

“I’ve practiced it for awhile, like three years,” she said. “It’s a nice move to have.”

Reece Niemann then scored on a drive and Boysen scored the final four points on a layup and jump shot down low for a 10-4 lead after one. Late in the quarter Torrie Schutzman saved an easy Powell bucket with a block in the paint.

The Fillies pulled away in the second quarter, taking advantage of steals and offensive rebounds to go ahead 24-11 at the half. Cody passed the ball around in the second quarter, with Schutzman hitting Reece Niemann for a long jumper and Reece passing to Schutzman for a baseline jumper during a 8-1 stretch to open the second. At the half Boysen led Cody with six points, Hays five and Bower and Reece Niemann four each.

The Lady Panthers made a small run in the third, getting within 11 points at 28-17.

“We weren’t sprinting to spots, we were sliding,” coach Chris Wagner said. “Finally in the second half we started looking up the floor (for a pass) after defensive rebounds.”

Cody responded with nine points on its next three scores. Bower fed Hays for a trey, Boysen found Bower behind the arc and Hays drove, sank the layup despite contact and the free throw for the three-point play and a 37-19 lead. Cody led 37-21 entering the final quarter.

The Fillies kept scoring in the fourth, with Kennedi Niemann hitting an early 3-pointer for a 44-23 lead.

Cody held on for the win, able to sub in younger players in the final minutes.

While the Fillies finished both halves with at least seven fouls, allowing the other team in the bonus, Wagner said that wasn’t necessarily a bad sign for a team that rarely sends other teams to the line for a one-and-one.

“It’s a good sign in a way,” he said. “We’re anticipating the steals more, getting into the lane. We just need to refine it.”

Cody travels to Star Valley and Jackson on Friday and Saturday.

With the 28 points allowed Saturday, the Fillies lowered their already best mark among 4A schools of points allowed per game, which was at 37 through 10 games.