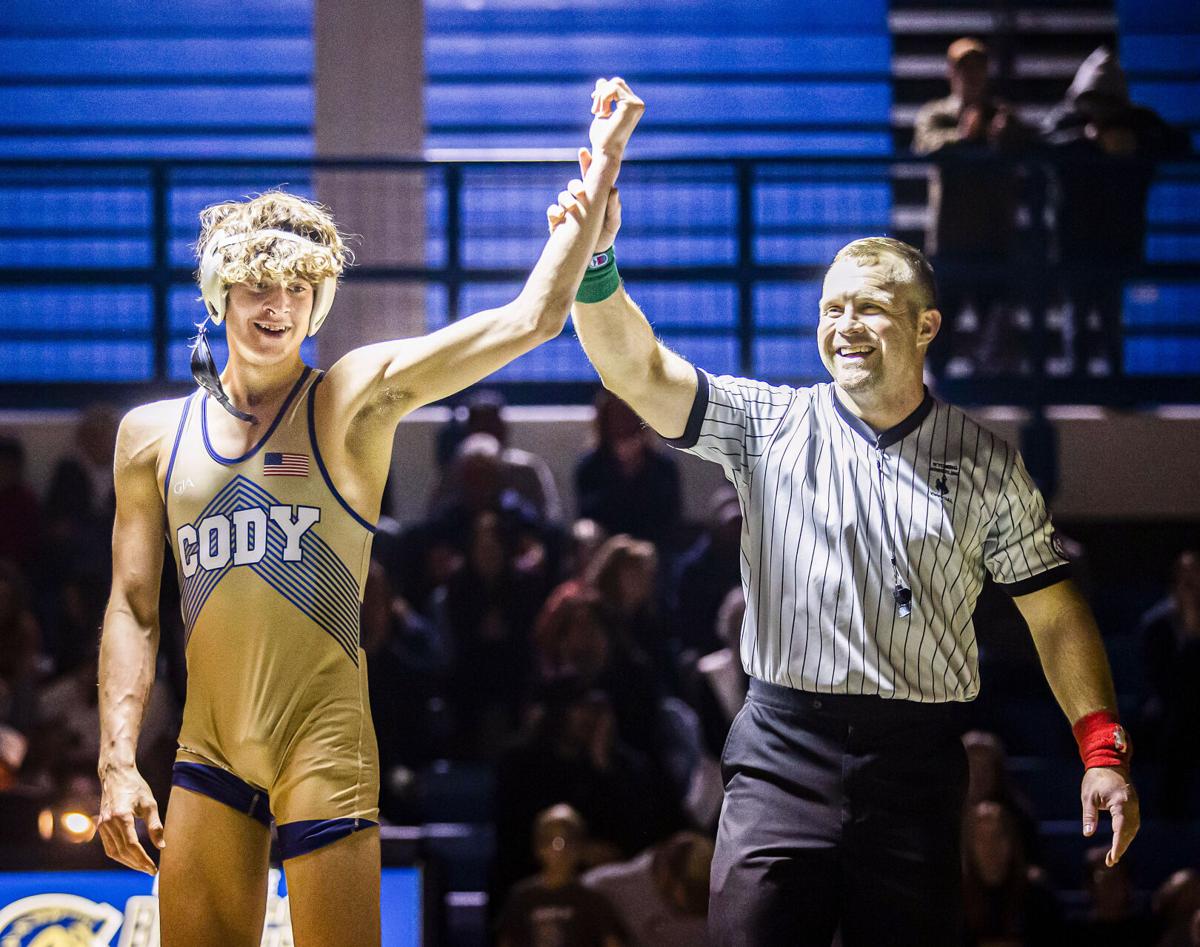 Jackson Wood wins his match against a Lander opponent during a dual meet at Cody High School on Tuesday, Jan. 4, 2022. 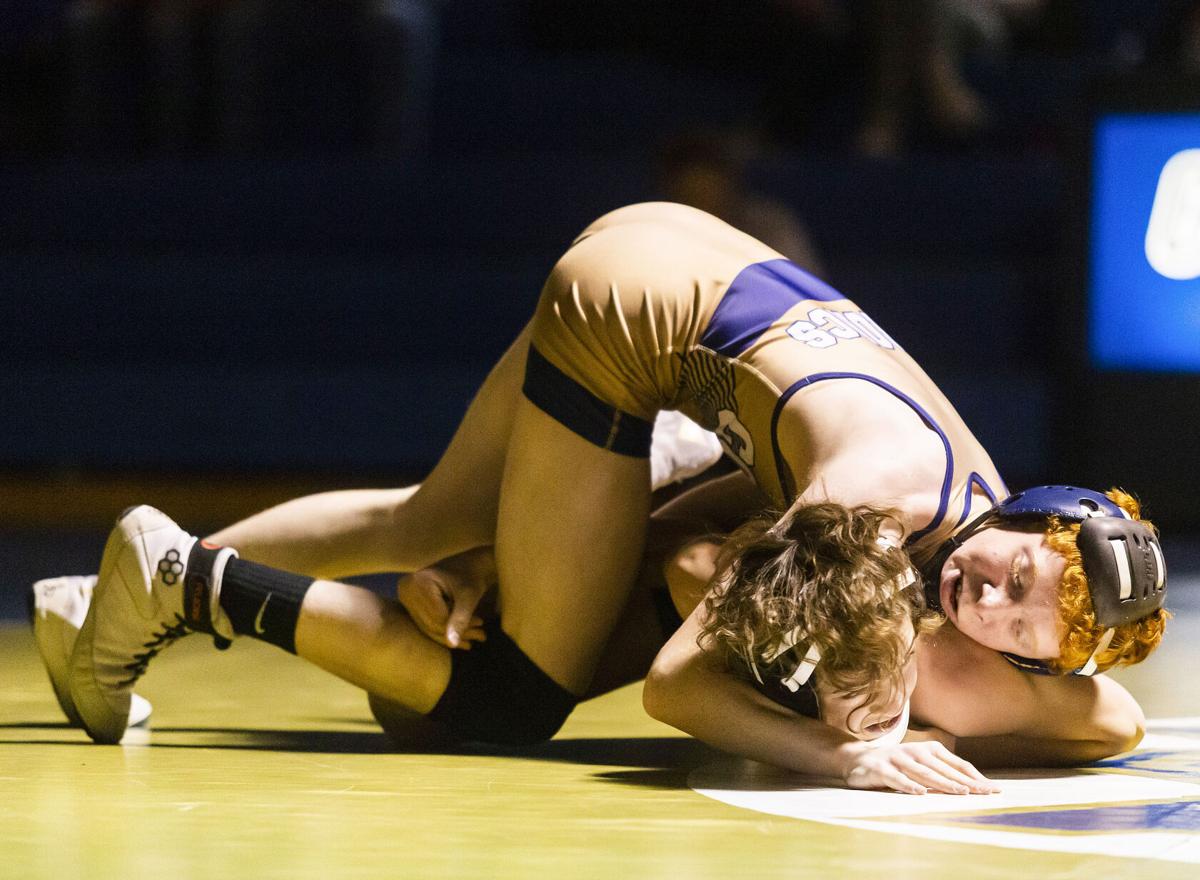 Jackson Wood wins his match against a Lander opponent during a dual meet at Cody High School on Tuesday, Jan. 4, 2022.

It may not come as a huge surprise with the amount of work the Cody Broncs wrestling team puts in during a season, but a little rust could be expected after a long layoff.

None of the Broncs, however, looked like they allowed the holiday break to affect their performances on Tuesday night.

After JV duals with Rocky Mountain and Lander at CHS, the Broncs grapplers reeled off a string of convincing victories to win a dual with the Tigers 51-30.

With 220-pounder Danny Becker, 170-pounder Collin Lindemann and 182-pounder Grayson Beaudrie without an opponent, it was up to the youngsters on the Broncs squad to take control.

Sophomore Taylor Baggs  (113) got the Broncs off to a solid start after freshman heavyweight Zach Barton lost to a large opponent from Lander by fall to start things out.

After a double-leg takedown early, Baggs secured a near fall before the clock saved his opponent from getting stuck in the first period.

After a takedown in the second period, Baggs patiently worked his way on the ground to get the win by fall.

Freshman standout Trey Smith followed that up at 120 pounds with a dominating performance that went according to plan.

After a quick takedown Smith racked up the points on three consecutive near falls before pinning his man.

“I went extra over the break so I don’t get gassed in matches,” Smith said. “Tonight I just kind of wanted to take him down, get a lot of turns, rack up the points and then pin him.”

At 126 pounds, sophomore Ty Peterson found himself entering the third period up 9-1 and added two points after a third period takedown before having to hold on for an 11-6 win.

Lander got some momentum after they won tough matches against Myles Hensley (132) and Ben Hogan (138).

Shayne Maxwell (145) ended the skid for Cody. Maxwell found himself in a tough spot throughout the first period and held on to enter the second down 0-2.

Maxwell started out in top position in the second and never gave it up to get the win by fall just over a minute into the period.

At 152 pounds, Jackson Wood looked explosive as he made his long-awaited debut on the season. He didn’t show any rust after a back injury kept the standout junior from the football field as he has nursed a back injury for the last four to five months.

Wood took down Lander’s Gabe Harris twice in a matter of seconds, racked up a 3-point near fall to come close to a pin, then put the squeeze on Harris and secured the win by fall with 15 seconds to go in the first period.

“My back is feeling normal now. It feels good,” Wood said. “It’s just nice to get back on the mat. I kind of wanted to run my moves, hope my back stayed good and want to just keep getting better.”

Jace Grant (195) wasted no time with Lander’s Zaim Cabriales. After a quick takedown, the junior wrapped up Cabriales to secure the win by fall in less than a minute to cap off an impressive Broncs performance.

Things may get tougher this weekend as Cody heads to another big tournament. The Broncs hit the road Friday and Saturday for the Bozeman Invitational.

“Bozeman is a tough one. It’s huge,” Smith said. “I know there are a bunch of good kids that are up there and are going to be in my weight class. They run a lot of arm bars like me. I kind of learned that from wrestling up there.”

For many of the young Broncs it will be their first time in Bozeman, as COVID canceled last year’s tournament.

After his opponent missed weight by a pound on Tuesday night, senior Becker (220) will head to Bozeman one of the few Broncs with experience in Bozeman and is facing a little bigger challenge than normal after a long break.

“Tonight was a blast, even though I was open,” Becker said. “But Bozeman is a big one. I’ll be wrestling heavyweight up there since they don’t have a 220 pound class. But this team is really looking forward to it.”