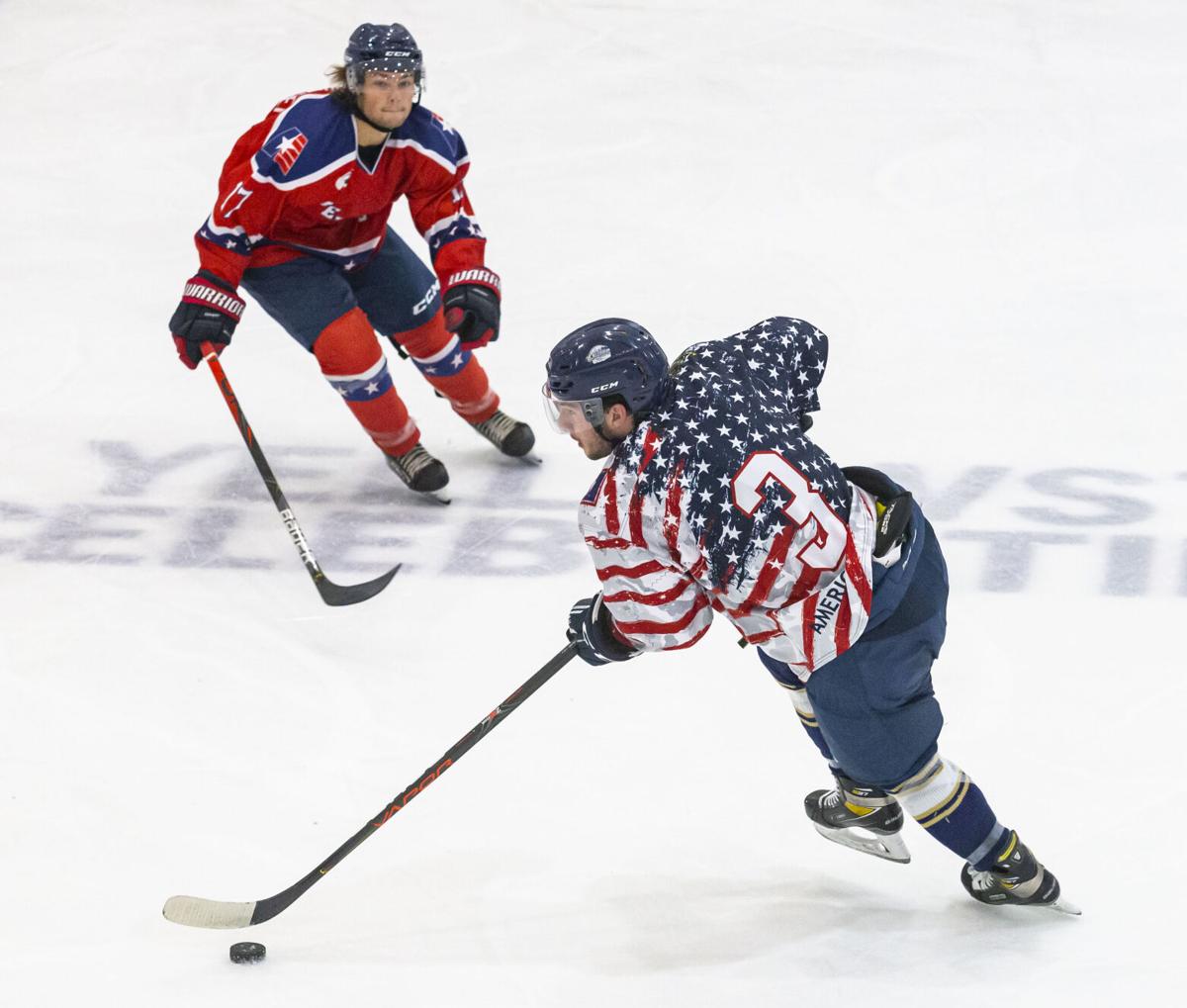 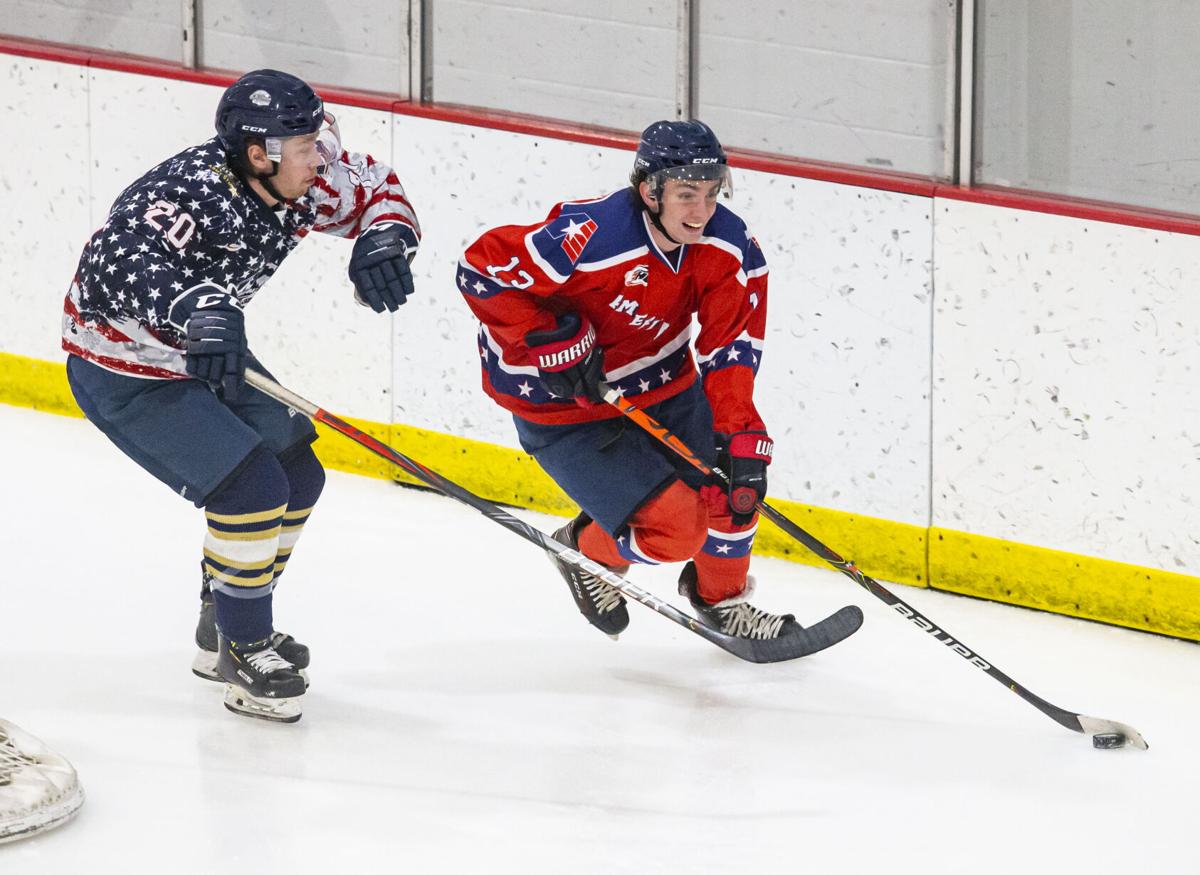 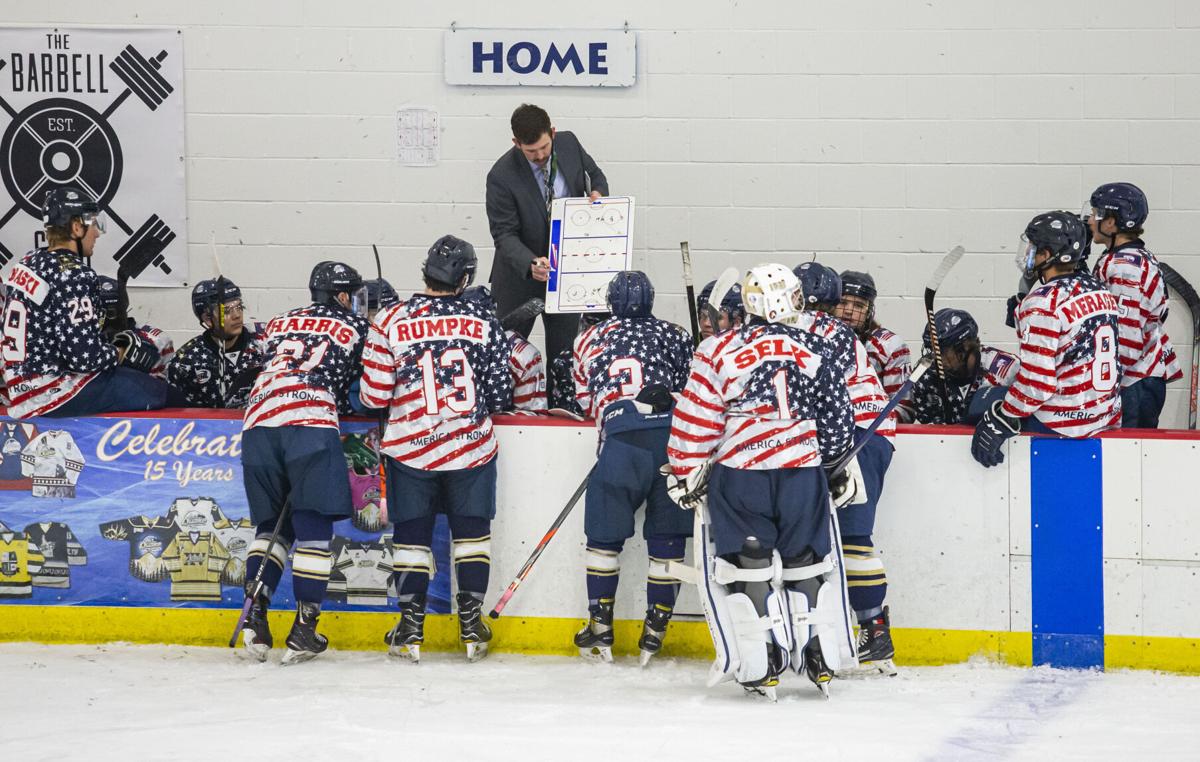 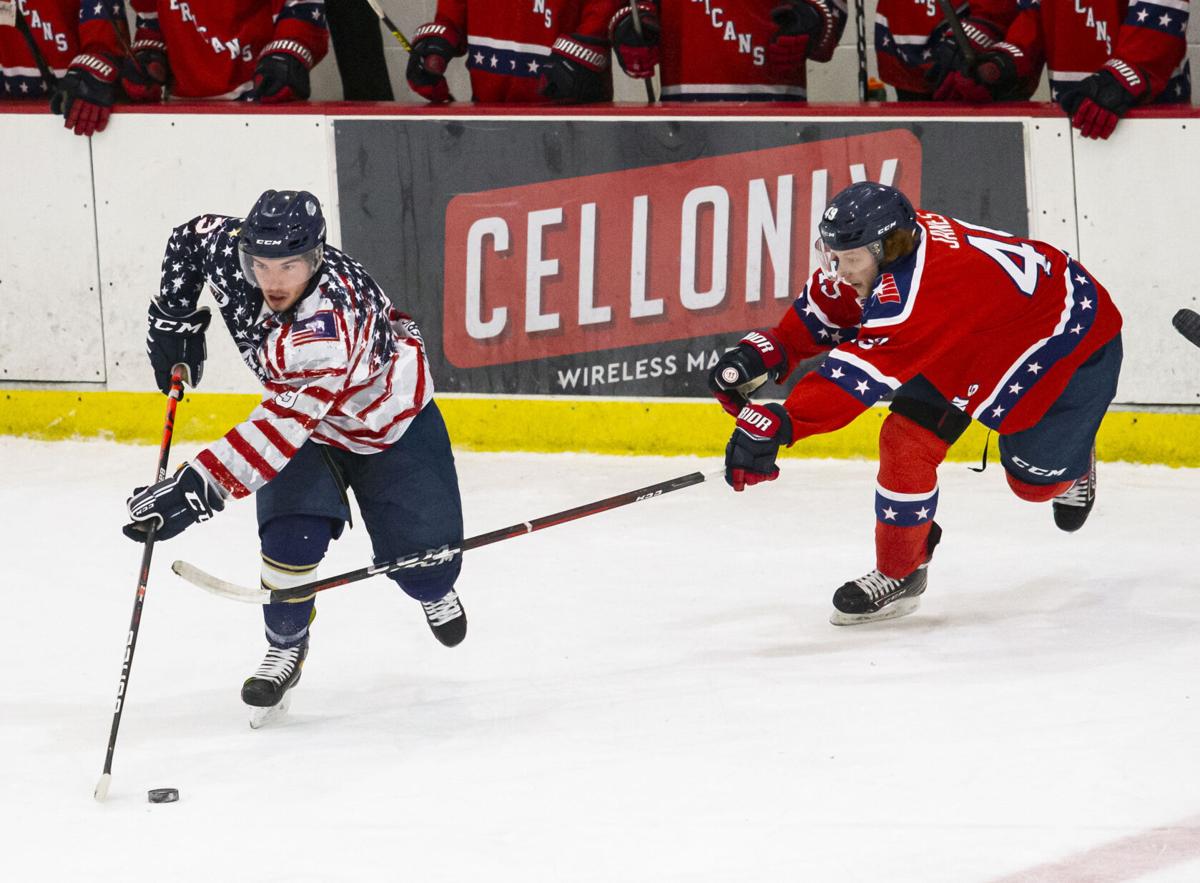 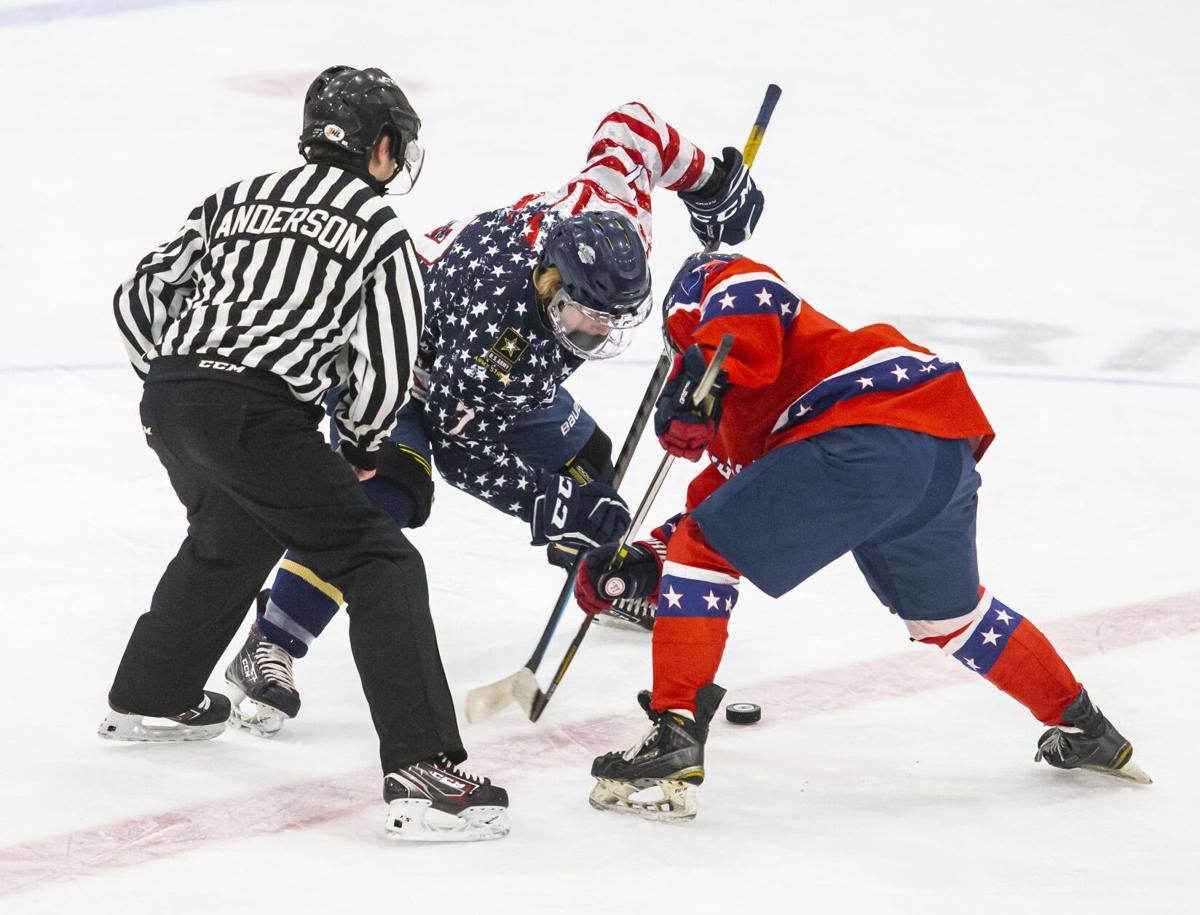 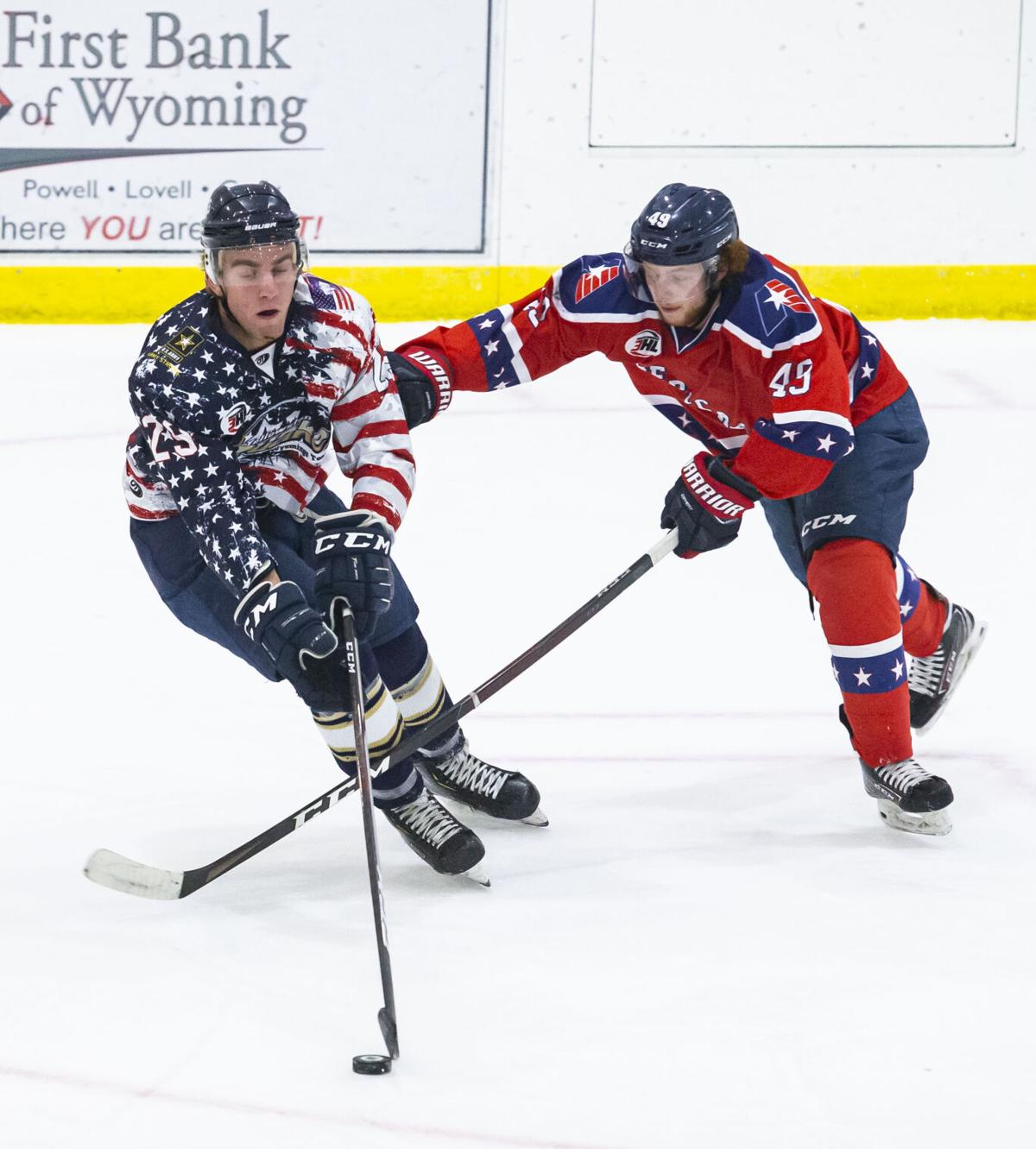 Will Sobaski goes after the puck against Great Falls defense Tommy Janes Saturday. 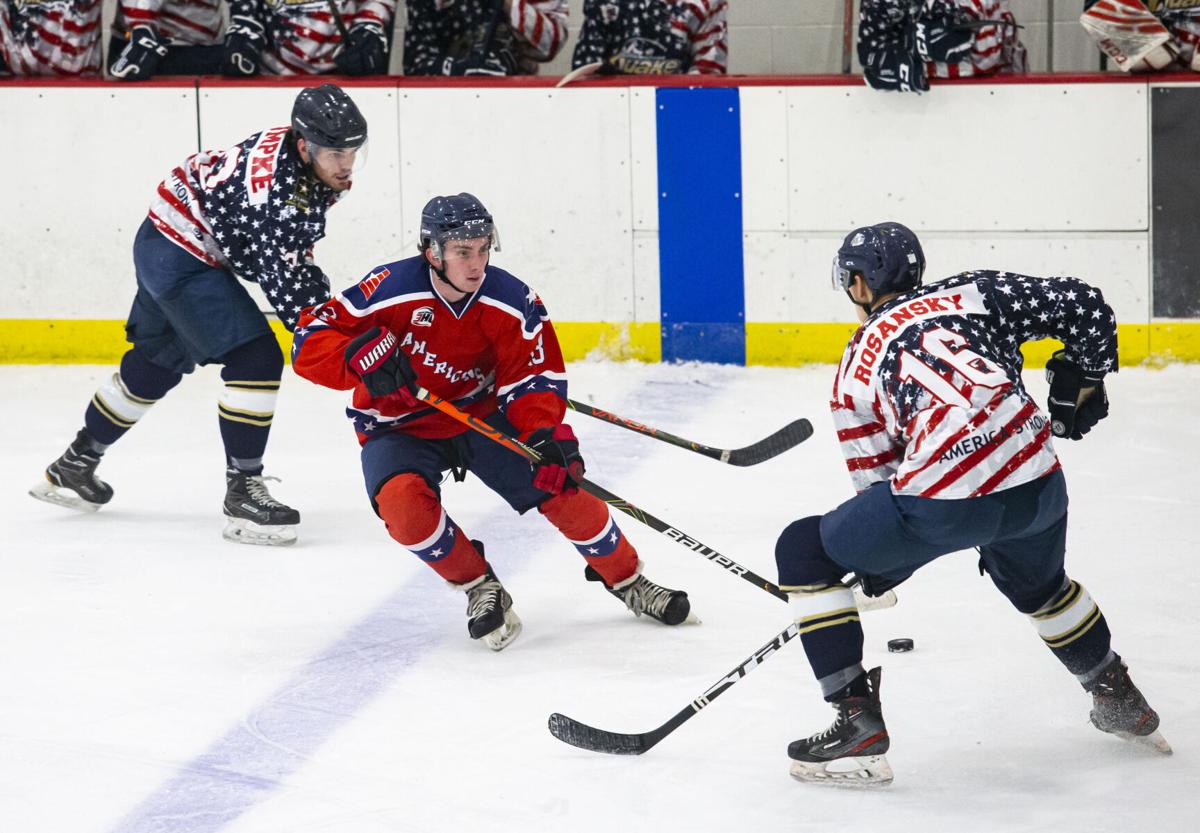 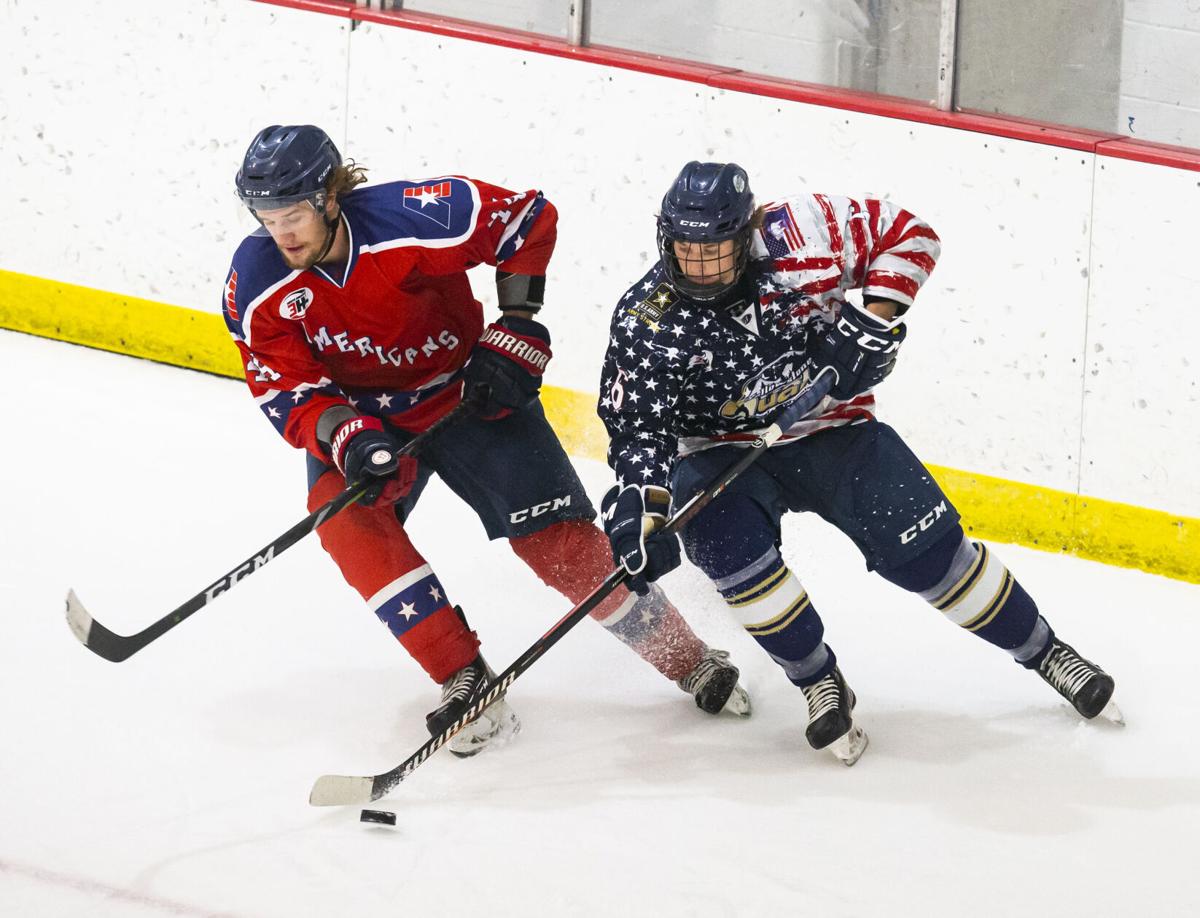 Will Sobaski goes after the puck against Great Falls defense Tommy Janes Saturday.

The Yellowstone Quake fell 6-3 to the Great Falls Americans on Saturday night despite staging a short comeback.

After giving up an early lead, the Quake (3-9) pulled within two goals before an open-net score clinched it for Great Falls (10-0).

“It’s the consistency that has to occur,” coach Phil Oberlin said. “It can’t be hit and miss.”

Yellowstone started strong as Cade Rosansky got the first Quake goal at 6:13 in the first period on a one-timer from the left side. He was assisted by Jack Harris and Dylan Rumpke on the play.

Yellowstone kept a 1-0 lead until 18:07 in the second when Henry Chavez scored for the Americans.

Harris returned the favor at 15:14 on an assist from Rosansky and Rumpke to make it 2-1.

But Great Falls added two more goals before the end of the period, giving them a 3-2 lead entering the third.

The team has only two veteran defensemen this year, which Oberlin said has made matters tough.

“Young players have to figure out how to play hockey consistently at this level,” he said. “A lot of them haven’t gone through practicing four times a week, two games on the weekend. It’s just making sure [we’re] maintaining that mental discipline, being ready to go for every single period.”

Brown, a 2020 Cody High School graduate and former member of the football team, is trying to emulate that team’s recent success with the Quake, doing his best to promote a culture of teamwork and competitive greatness.

“That’s something I missed after the football season last year and something I’m hoping we can develop here,” he said.

But the Quake weren’t down and out just yet.

Brown scored at 7:05 with a winding slapshot from near the blue line that pinged against the top crossbar before bouncing in.

“I just popped out. All week we practiced getting pucks on net,” he said.

The Quake seemed to pick up some energy from the score, but a two-minute charging penalty committed by Aiden Croce at 5:33 put a serious dent in Yellowstone’s comeback efforts.

The Quake peppered Great Falls goalie Vincent Marroni with shots when back at full strength but could not get any to fall through despite pulling Selk.

Hayes got his open-netter with 30.7 seconds remaining to make it 6-3.

Immediately following the goal, it looked like a Great Falls player slashed Harris after the play. A fight broke out between the teams with multiple punches landed and players thrown to the ice.

“It’s just frustrating,” Rosansky said. “Even though we’re losing and that team is beating us, you’ve got to win with some class.”

Will Sobaski and Austin Lawless were ejected from the Quake while Hayes was ejected for Great Falls.

Selk made 51 saves for the Quake. Great Falls outshot Yellowstone 57-22.

“Much better than (Friday),” Oberlin said.

On Friday night the Quake fell 10-2 to the Americans.

That game was tied 2-2 after one, but Great Falls poured it on in the second, scoring five times.

Lawless and Rumpke scored for the Quake and Lawless also added an assist.

“We can’t take them lightly,” Rosansky said. “No offense to us, but we’re not winning games by a whole crap ton right now either. We’ve got to come up with some points and we’ve got to play our game and not just lapse.”