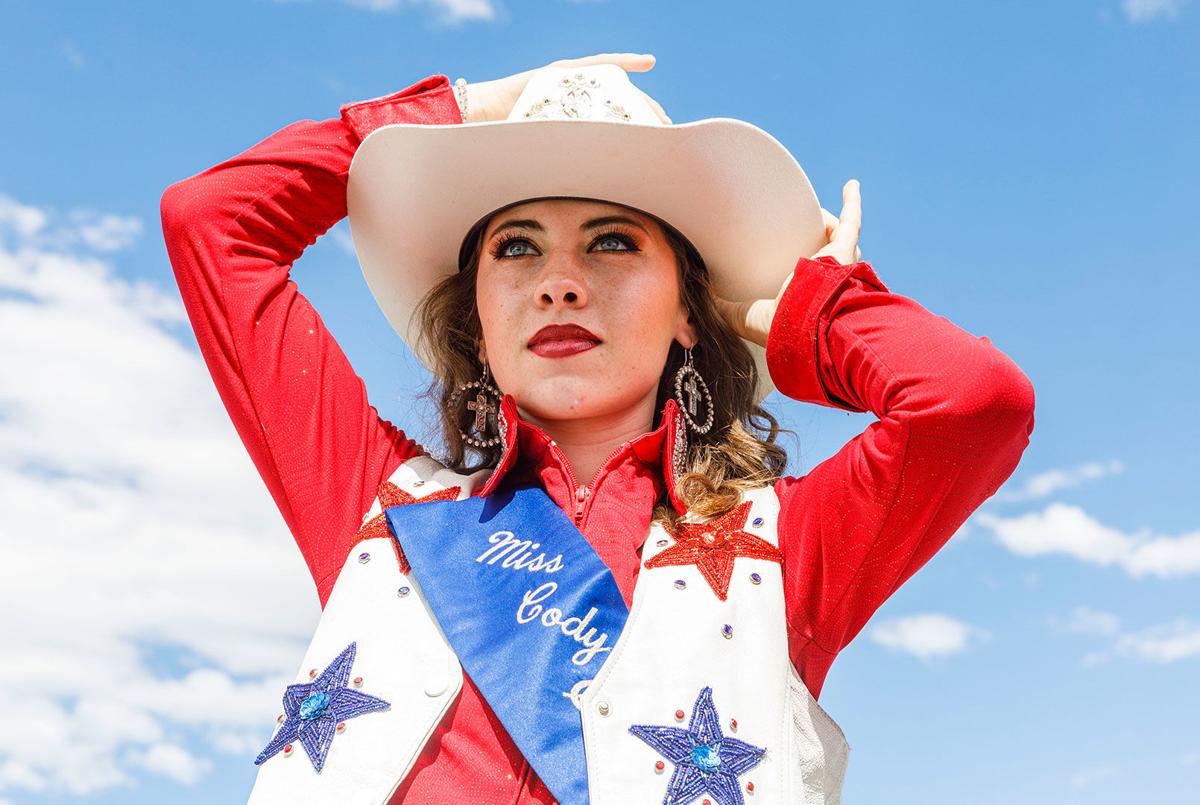 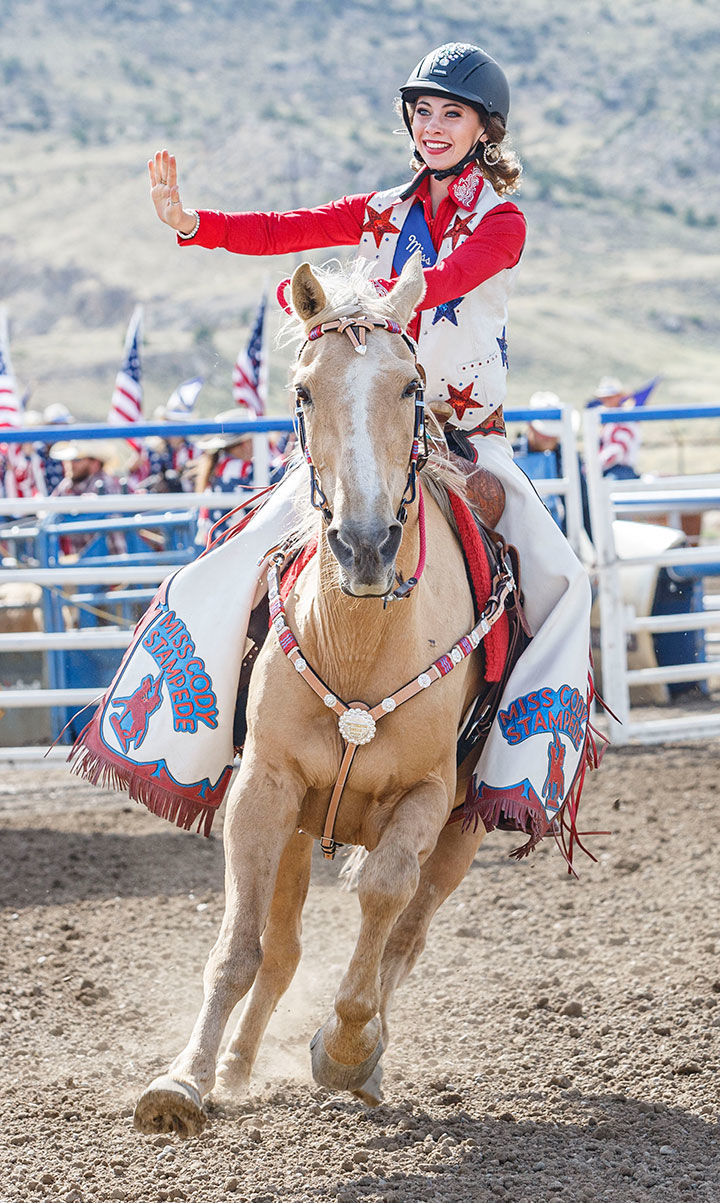 Rylee Ramsey waves to the crowd from her horse Trigger during the queen lap.

Rylee Ramsey waves to the crowd from her horse Trigger during the queen lap.

When Miss Cody Stampede raced around the arena each night during the opening ceremonies of the rodeo, it was as much a victory lap as a hello to the crowd.

About 10 months ago, Rylee Ramsey had a life-threatening horse accident at Stampede Park, but she has worked hard to build her confidence and get back on a horse in preparation for her duties during the Cody Stampede.

“Every time I step through the gate I think about the wreck and that day, but with my friends and family there I knew I’d be OK and it went well,” she said of the rodeo. “This year my confidence had to rebuild. I know anything can happen, but I’m capable of doing anything I set my mind too.”

It was while practicing for her queen duties that Ramsey had her accident. On Aug. 27, 2019, a strong gust of wind through the arena spooked her horse. It took off across the arena and the two went down.

When the horse came back up Ramsey stayed in the saddle but lost her grip while trying to get her flag out of its boot. When the horse turned sharply, Ramsey was thrown and landed on her head.

The arena was almost deserted but some bystanders who saw the accident called 911. As Ramsey and her mother Stephanie waited for help, she remained conscious.

She was rushed to Cody Regional Health where they found a linear skull fracture and a severe concussion.

The hospital was ready to release her, but her mother felt something wasn’t right and convinced doctors to do another test.

A CAT scan found Ramsey’s brain was bleeding and she was immediately rushed to the ICU at Billings Clinic. She was released two days later, but rest and recovery were crucial over the following weeks. Ramsey was finally cleared by doctors for activity in December but waited a few more months before getting back on a horse.

“We wanted to take extra time and not risk anything,” she said.

She got back in the saddle in April, borrowing a horse named Red to help her build her confidence. Red was ridden during the Stampede rodeo and parades last year and was used to flags.

“I knew I was going to get back on a horse,” Ramsey said. “I think it as more nerve-wracking for my family. I was nervous but I was ready to get back on.”

She started working with Mitch Shelhamer of Serenity Stables in Basin, learning some techniques to stay calm while riding and keep her horse calm as well.

“It was going over the basics again,” she said.

After a couple of months of work she was ready for her first performance – riding a lap during the opening night of the Cody Nite Rodeo on June 20.

“It was stressful because I didn’t know how (the horse would) react, but awesome being back in the arena,” she said. “It went well.”

She returned a few more times to prepare for the Stampede Rodeo and then it was time.

As Lady in Waiting last year, Ramsey knew the drill but said there was a little more pressure as this year’s Miss Cody Stampede.

“It was a long week for sure but it went smooth,” she said. “It was more been there, done that because I was used to this rodeo so that was helpful.”

As part of her duties for the week she took part in the Kiddie and Stampede parades.

“I always love the parade,” she said. “You get to see the faces and your friends and family.”

Each night she rode in the Stampede rodeo during the entry and helped clear the arena during tie-down and steer wrestling.

“My favorite part was the queen lap,” she said. “I got to wave at everyone and have a good time. It was nice to see the full stands. It was a lot more upbeat and cheerful.”

She also signed autographs downtown and after the rodeos.

While the week went well, there was still a fair amount of nerves, especially when conditions were similar to that of the accident.

“Stampede week was very windy and when the flags blow I start to think about myself more than the horse, but then I have to reel it back in and be aware for both of us,” she said.

And since returning to riding she has refused to mount up without wearing a helmet.

“I’m the first Cody Stampede queen to wear a helmet, but it’s OK to be different,” she said. “I’m a big supporter of helmets because so much can happen. When I see kids with helmets or (barrel racer) Fallon Taylor, it makes my heart happy because their taking their health and safety first.”

Ramsey had participated in barrel racing and goat tying when she was younger and wanted to learn about a different side of rodeo, signing up for the queen competition.

“I’ve learned a lot about leadership,” she said. “I had to do a lot of public speaking and thinking fast and being confident in what I’m going to say.”

Normally Miss Cody Stampede competes in the Miss Rodeo Wyoming contest held during the state fair in Douglas. However, since the contest was cancelled, Ramsey has been invited to return as Miss Cody Stampede next year to experience the full scope of her duties and compete for the bigger crown.

“We usually go to Sheridan, Thermopolis and Cheyenne Frontier Days along with some smaller rodeos,” she said. “But it was nice not to have that so I could get my confidence up.”

Last fall when the accident happened, Ramsey was packed and ready for her first year studying radiology at Montana State University.

Now she plans to attend Casper College this fall for its occupational therapy assistant program.

“Hopefully nothing changes with Covid,” she said.

And while her Miss Cody Stampede duties are done for the year, she said she’ll probably make a few more appearances at the Cody Nite Rodeo this summer.