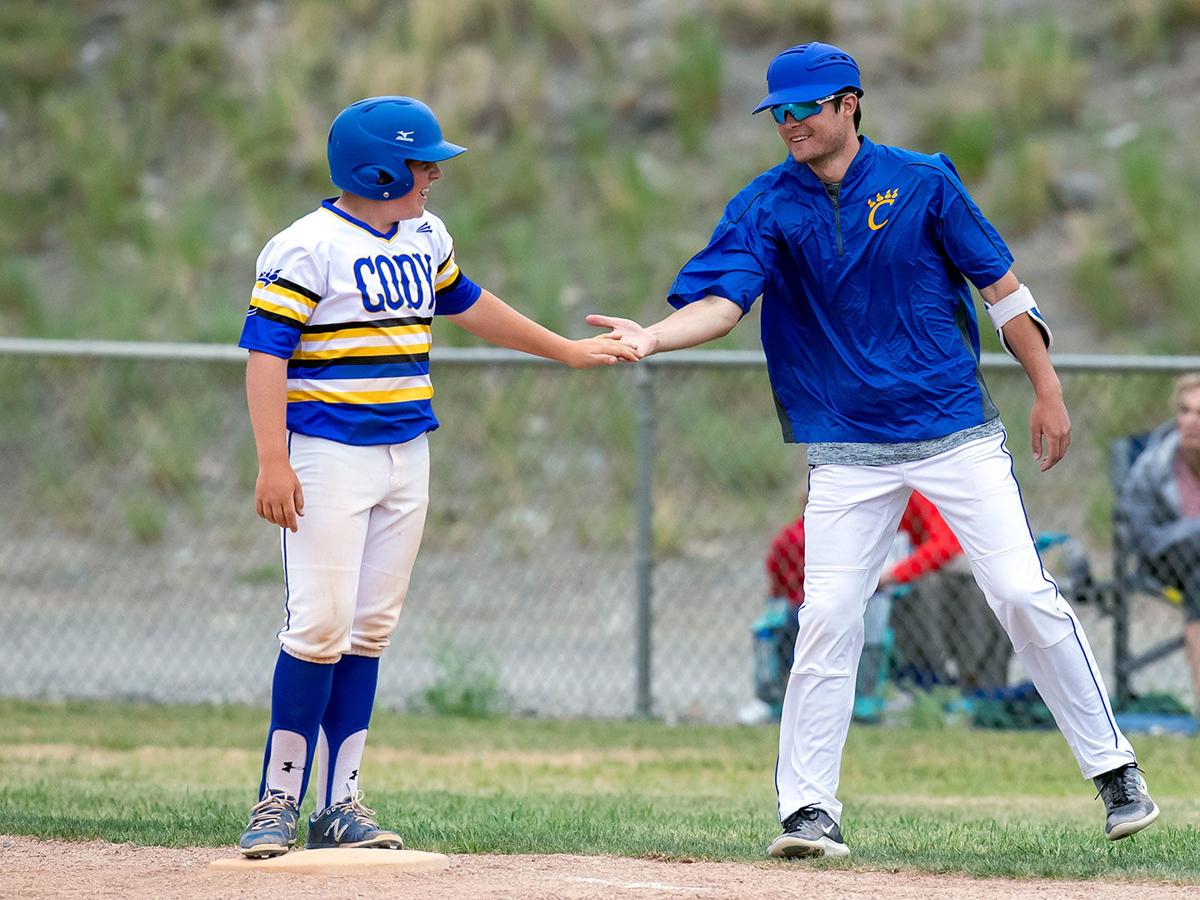 Connor Moss gets a low five from assistant coach Jordan Wasia after safely reaching first base June 3 against Lovell. 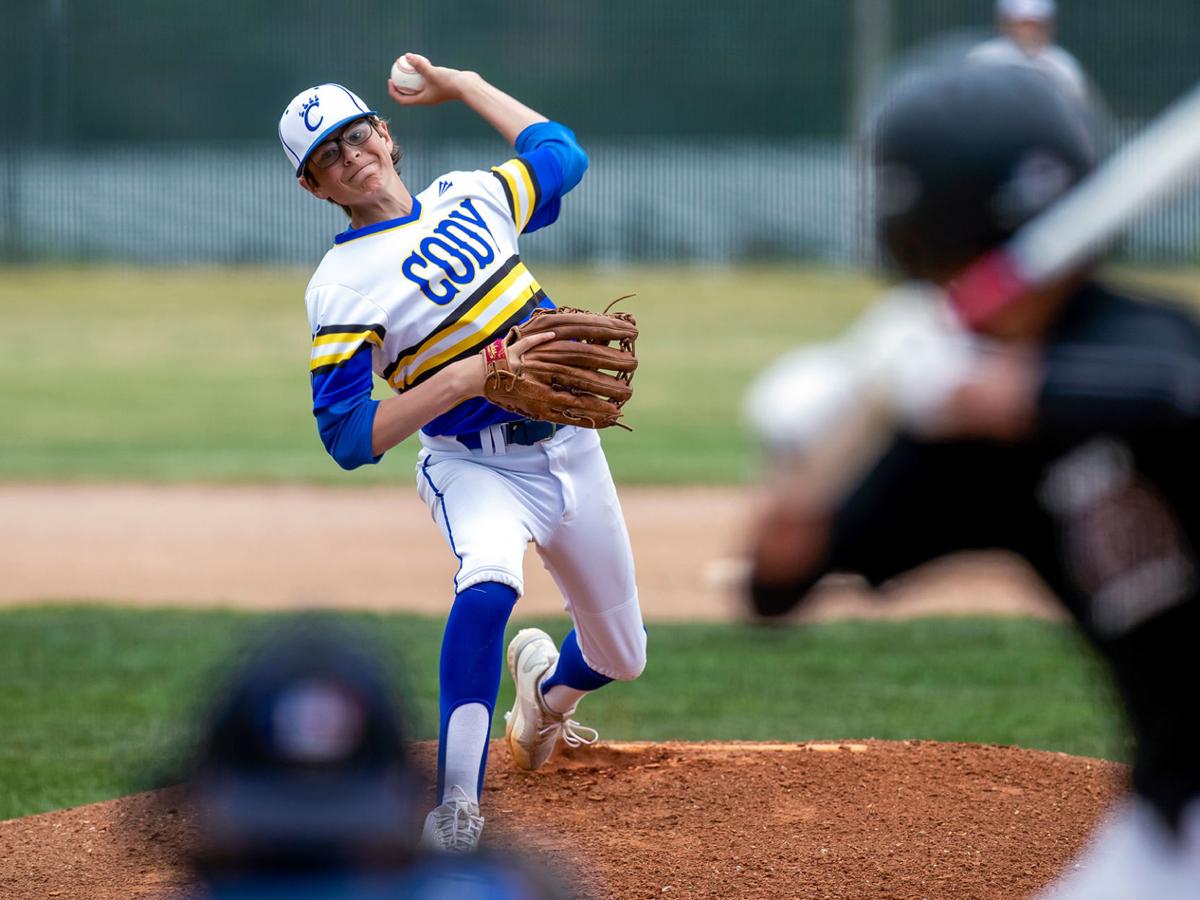 Connor Moss gets a low five from assistant coach Jordan Wasia after safely reaching first base June 3 against Lovell.

The Cody Legion B team is off to a strong start, with big wins over both Riverton and Lovell in its first seven games.

The Cubs played Billings on Saturday, the second game of a doubleheader split with the A team.

“I thought the team played well against the Halos,” coach Beau White said. “We put ourselves in position to score runs in several innings. Late in the game we had opportunities to score runs but were unable to plate more than one.”

Billings scored one run in the first inning, but Cody tied the game in the bottom of the frame on a ground out.

The Halos scored two more in the second, one in the third, and two in the fourth, fifth and seventh.

“Defensively we made a couple of mistakes but we also made some nice plays,” White said. “The team played hard until the last out and (assistant coach Jordan Wasia) and I were pleased with their play.”

Cody scored two in the third on singles by Trey Schroeder and Dominic Phillips, one in the sixth on a single by Connor Moss and one in the seventh on a double by Logan McLeod.

“I thought our effort throughout the game was really good,” White said. “Our pitchers did a great job throwing strikes and gave us a chance to keep the score close.”

“Every player hit the ball well against Lovell,” White said. “They were seeing the ball deeper in the zone and hitting it to the opposite field. The guys ran the bases hard and we were able to take extra bases with aggressive base running.”

Cody scored nine runs in the first on singles by Wyatt Carlson (two), Schroeder, Moss, Reinker and McCarten, and a double by Devon Torczon.

The Cubs added eight in the second, which included triples by McCarten and Torczon.

After a one-run third, Cody put up six in the fourth, which included singles by Carlson, Schroeder, Torczon and Moss.

Schroeder earned the win, giving up no runs or hits through 2 innings. Chance Moss went 3 innings and allowed one run on no hits.

Another high-scoring first inning helped Cody pull away in the second game.

Trailing 2-0, Cody scored eight runs in the bottom of the frame, which included singles by McCarten and Schroeder, a double by Logan McLeod and back-to-back triples by Reinker and Eli Johnston.

The Cubs added 10 runs in the second, thanks to a double by McLeod, and singles by McCarten (two), Jarrett (two), Connor Moss and Schroeder.

“Our defense made plays behind our pitchers and that was great to see,” White said. “One thing we really need to work on is our communication defensively. We have improved but need to work on communicating before the next pitch is thrown.”

A six-run fourth inning helped Cody power its way past Riverton on June 1.

“Our hitting improved tremendously in the Riverton games,” White said. “Jordan (Wasia) and I thought the team was a lot more aggressive at the plate and hit much better.”

The Cubs finished with 13 hits. Carlson and Reinker went 2-3, and McCarten and McLeod 2-4.

McLeod pitched 5 innings and allowed one run on two hits.

A nine-run first and seven-run third led to a big win in game two.

Two singles by Schroeder, one by Torczon, a double by Reinker, three walks, a hit batter and two errors led a big first inning for Cody.

In the third, singles by McLeod, Connor Moss, Jarrett, Reinker, McCarten and Schroeder and a double by Moss brought in seven.

Carlson earned the win, giving up no runs or hits through 2 2/3 innings. McCarten pitched 1 1/3 innings and allowed one hit and Reinker went 1 inning and gave up one run on one hit.

“Again, our pitchers did a great job throwing strikes and making their hitters swing the bats,” White said.

Cody opened the season May 29 against Sheridan.

“I thought the team played well against Sheridan,” White said. “We came out a little nervous, but I was impressed with the fact that the guys played very competitive baseball until the last out in both games.”

The Cubs and the Jets went back and forth throughout the first game, with the Jets pulling ahead 10-4 in the final inning.

The Cubs tried to mount a comeback in the bottom of the frame, scoring three runs on two walks, a hit batter and singles by Jarrett and Carlson, but fell short.

Torczon started on the mound, going 3 innings and giving up one run on one hit. McCarten pitched 3 innings and allowed five runs on five hits. Moss took the loss, allowing four runs on four hits through 1 inning.

Sheridan scored in all but one inning on its way to a second win.

Cody scored three in the first and one in the third before a big seven-run fifth helped keep the Cubs in the game.

Chance Moss started the inning with a double, followed by a single by Johnston. Five straight walks, a hit batter and an error scored the runs.

The Cubs added a run in the seventh.

“Our hitting was not what we would like it to be, but I thought the pitchers did a great job throwing strikes and we made some nice defensive plays,” White said.

Sorry, there are no recent results for popular articles.