Mickle Ogden (7) boots through the game-winning kick Friday against Burlington. 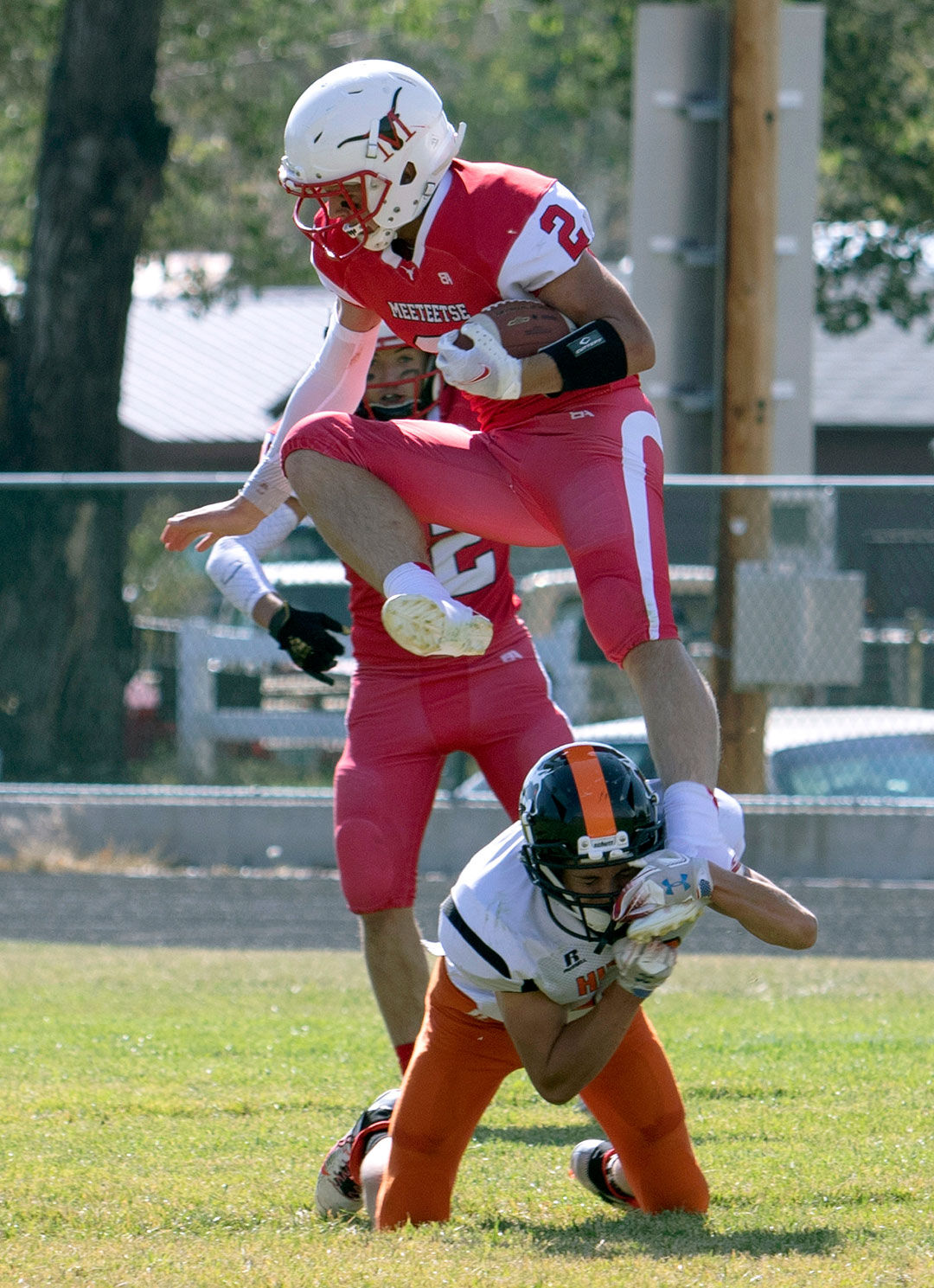 Dace Bennett tries to jump over a Burlington defender on Friday at Meeteetse.

Mickle Ogden (7) boots through the game-winning kick Friday against Burlington.

Dace Bennett tries to jump over a Burlington defender on Friday at Meeteetse.

They’ve had the game circled since the season began.

With the score tied, the Meeteetse football team drove down the field with just over two minutes to go and won the game with a field goal to defeat No. 5 Burlington 42-38.

“For the first time, I was just cool, calm and collected,” kicker Mickle Ogden said. “I didn’t hear anything. Just kicked the ball and that was a huge blessing that I was able to do that.”

The score was knotted at 38 with 2:19 left in the 4th. Junior quarterback Dace Bennett had to drive his team the length of the field. He hooked up with junior Jonathan Blessing three times en route to 30 yards through the air. Bennett picked up another 16 on the ground in the drive. It wasn’t enough.

Stalled at the Husky 19 with time running out, the Longhorns sent out Ogden.

The kicker, who had missed his only other field goal attempt this year, trotted back out on the field, lined up the kick, planted his foot and sent it away.

“That’s my boy!” yelled PA announcer and Mickle’s father Shane Ogden over the microphone when the ball sailed through the uprights to put the Longhorns up for good.

Meeteetse is now tied with Farson-Eden and Kaycee for the best record in 6-man football.

“At the beginning of the season, we were underdogs,” senior Tozai May said. “I don’t think we’re underdogs anymore.”

The Longhorns (4-0, 3-0 conference) started strong, driving down the field on their opening possession. Senior Hadley Abarr tried to punch it in from a few yards out, but a Burlington defender forced the ball out a yard from the goal line – and into the waiting arms of Bennett, who ran it in for a touchdown.

The Huskies (1-3, 0-3 conference) blocked the extra point, giving the Longhorns just a six-point cushion. It wouldn’t last long. Burlington drove down the field, airmailing yardage into the hands of senior Kody Gotfredson. They converted the extra point and took a two-point lead.

The Huskies’ D tightened up and forced the Longhorns to give the ball back. The Huskies botched a snap and Abarr dove on top of it, giving the Longhorns a new possession. Two long third-down conversions later, Meeteetse scored again and went up 14-8 in the first quarter.

Burlington’s offense came back and marched down the field again, but an errant pass by sophomore QB Cohen Schlenker got tipped into the air, right into Bennett’s waiting arms. The Longhorns drove down the field again and put more points on the board, now up 20-8.

On the next drive, Gotfredson put the team on his back and carried Meeteetse defenders down to the goal line. The Huskies punched it into the end zone in around a minute and added two more points, bringing them within four, 20-16.

Needing a cushion going into the half, Bennett started the next drive with a pass that was picked off and taken to the house. The Huskies now had the advantage, 24-20.

The Huskies D forced Meeteetse to turn it over on downs the next possession. Although the Huskies completed their first pass of the drive, it turned into a fumble and the Longhorns got the ball back with decent field position.

Abarr ran hard to the outside and got hit low. He sat out the remainder of the game. Now without their senior leader, Bennett took it himself on the next play and gave the Longhorns the lead back 28-24.

Burlington tried to shake off the chunk play, but penalties pushed them farther and farther back. On their own five, the Huskies bobbled another snap and the ball went into the endzone. They recovered it, but were down on the grass, giving the Longhorns a safety and a 6-point lead to end the half.

The Huskies defense adjusted to the run-pass option that had gashed them the entire first half, and clawed their way back into the game. Bennett shook off strong pressure and sliced between two defenders for a score late in the third to put the Longhorns on top, 38-24.

Down 14, the Huskies top rusher, senior Gideon George, pushed through the Longhorns defense. Early in the fourth, George found a seam and ran it 61 yards for a score to bring the Huskies within six.

Bennett went down with some leg cramps in the following minutes. George capitalized on his absence, taking the ball for another long gain. Junior Kalvin Erickson saved the touchdown on a shoestring tackle. It wouldn’t matter. Two plays later, George punched it in. The defense did its job and saved two more points from the conversion from going on the board to set up the final winning drive.

The kicker was the real hero of this game. Heck of a game, Go Longhorns! There how was that? Will this get deleted too?

My first game watching the Longhorns, it was a great game too, one of the best I have ever seen. But the offense is too dependent on a what seems to be “1 dimensional QB“... think Tim Tebow. The kicker was the real hero of this game. That offense needs more diversity, of course that’s more of a challenge for 6 man football.