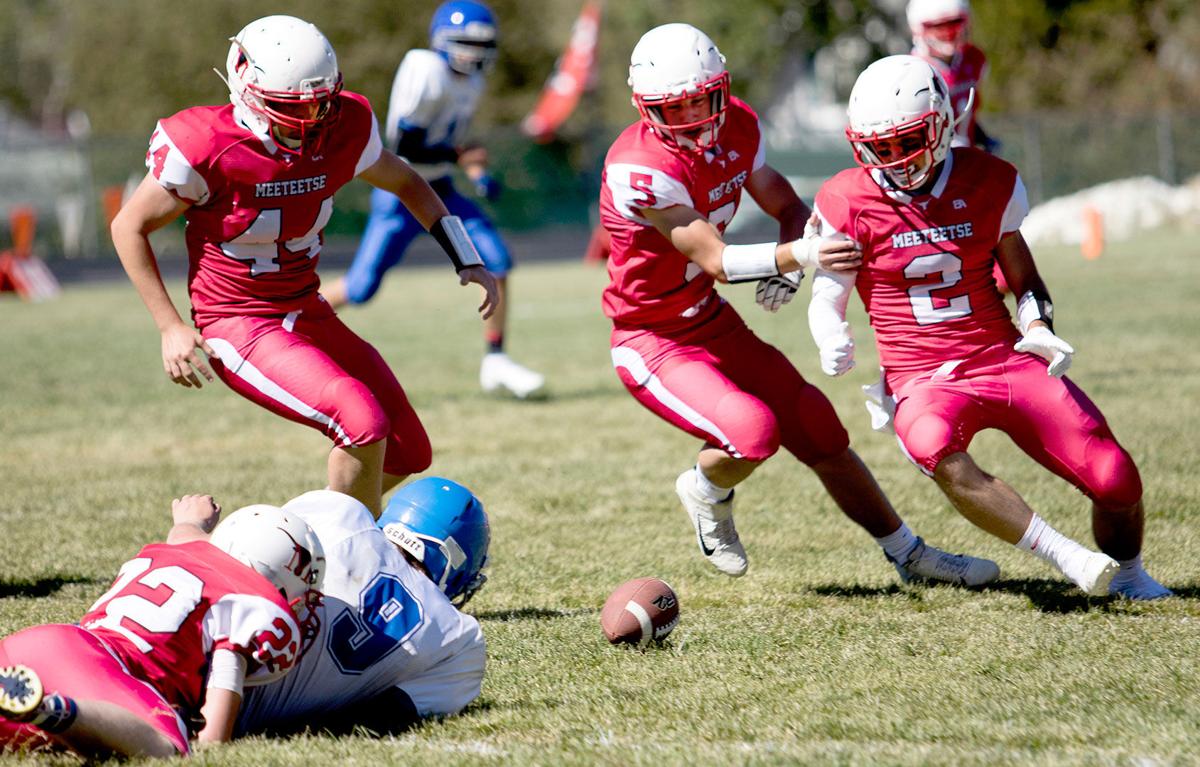 Jonathan Blessing (standing, from left), Dale McBride and Dace Bennett get ready to jump on a fumble forced by Kalvin Erickson during Meeteetse’s win over Ten Sleep on Saturday. 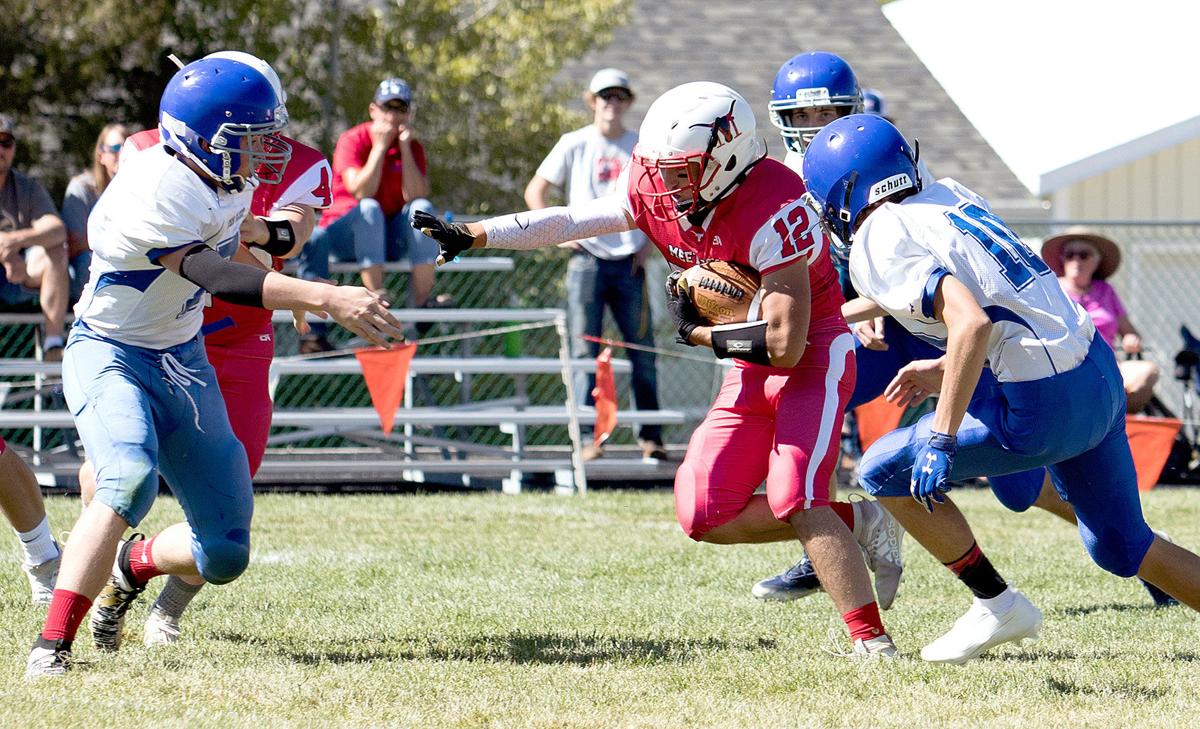 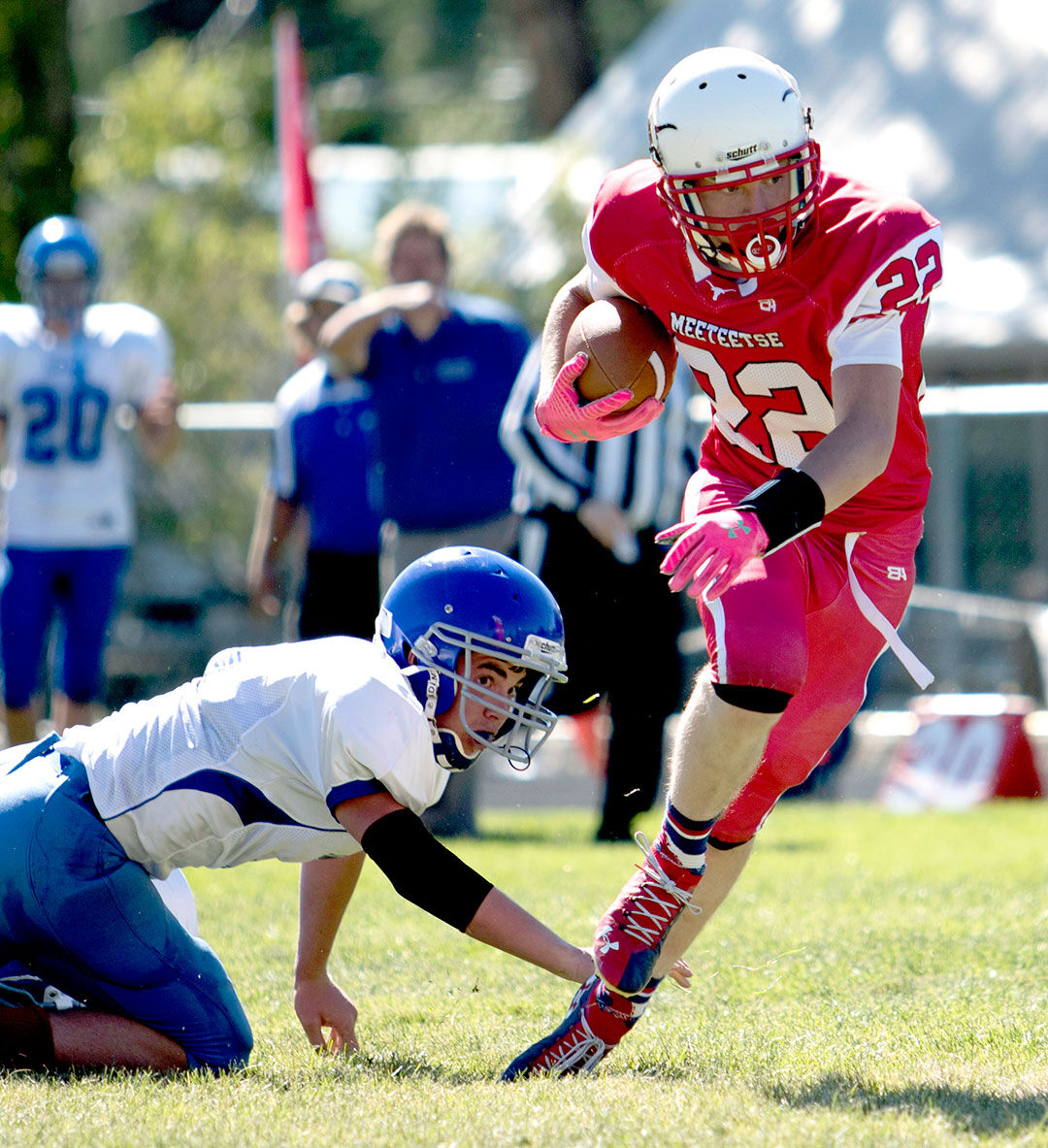 Jonathan Blessing (standing, from left), Dale McBride and Dace Bennett get ready to jump on a fumble forced by Kalvin Erickson during Meeteetse’s win over Ten Sleep on Saturday.

Homecoming proved to be no distraction for the Meeteetse football team as it shut out the Ten Sleep Pioneers, 73-0, with a combination of great defense, stellar offense and good coverage on special teams.

The Longhorns (2-0) were dominant from whistle to whistle, putting up 54 points by halftime and not even allowing a Ten Sleep (0-2) first down until the second quarter – on a pass-interference penalty.

The Longhorns were bolstered by strong play from junior quarterback Dace Bennett, who ran and passed his way across the Ten Sleep defense, and returned an interception 34 yards for six points in the first quarter.

Bennett’s best play may have come in the third quarter. On a QB keeper, he stiff-armed and trucked his way through Pioneer defenders en route to a long score.

“I think we played well together in all areas of the football today, especially on special teams,” coach Zeb Hagen said. “That was kind of an area we wanted to focus on.”

After allowing multiple scores on kickoffs last week against NSI Academy, the Longhorns pinned the Pioneers back within their own 5 on more than one occasion. The best starting field position for Ten Sleep on kickoffs (which they only got to one time) was no further upfield than their own 20.

It would be hard to give a game ball to any one player in this game because so many showed up in big ways for the Longhorns. Bennett was once again a scoring machine, doing it all on offense and defense. He was responsible for 207 of the Longhorns’ 309 yards on offense, 118 through the air and 89 on the ground. He also put up 7 of the 11 Longhorns touchdowns.

Senior Hadley Abarr set the tone on the opening drive of the game with back-to-back big runs. He finished the game with 50 all-purpose yards and a receiving touchdown. Defensively, Abarr wreaked havoc in the Ten Sleep backfield, putting heavy pressure on junior quarterback Brian Shoopman, blocking two punts and forcing a safety.

Senior Dale McBride had a breakout game, busting off long runs and mixing it up on almost every defensive play. He finished with 84 yards on the ground and a touchdown.

“If I’d have seen [McBride] and someone told me today that he hasn’t played football since he was in sixth grade, I’d have called them a liar,” Hagen said.

In a high-scoring affair with plenty of action on both sides of the ball, junior Kalvin Erickson may have stuck out the most. Erickson starred in all three phases of the game, refusing to be brought down after a catch on offense en route to 71 receiving yards and two touchdown catches.

He blocked well on the outside, broke up passes and forced fumbles on defense, and he was responsible for more than a few of the occasions that Ten Sleep had to start drives inside their own 5-yard line while racking up 16 tackles (10 solo, two for a loss).

Even with that stat line, Erickson just wanted to talk about the team.

“Everyone got to play, everyone had good plays from the freshmen to the seniors,” he said. “It’s been really cool to see how the freshmen have stepped up and the seniors have taken a leadership role and are helping us out.”