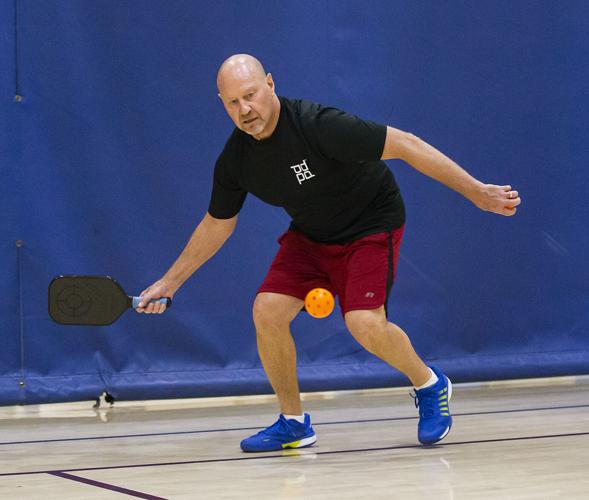 Doug Weedin plays in a pickleball tournament at the rec center on Saturday, April 23, 2022. 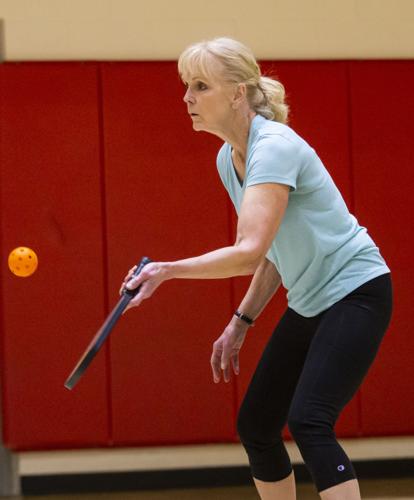 Cheryl Elliott plays in a pickleball tournament at the rec center on Saturday, April 23, 2022.

Doug Weedin plays in a pickleball tournament at the rec center on Saturday, April 23, 2022.

Cheryl Elliott plays in a pickleball tournament at the rec center on Saturday, April 23, 2022.

The Cody Rec Center hosted its biggest pickleball tournament since its inception a handful of years ago, with nearly 80 people from around Wyoming and Montana competing in the annual event last weekend.

Pickleball, noted in the Economist as the fastest growing sport in America, is a net sport that is a combination of tennis, ping-pong and badminton.

“For older people it is nice because it is a smaller court than a tennis court and you don’t have to run as much,” local Pickleball Association of America Ambassador Peter Okada said. “The ball isn’t as fast, it’s easy to learn and it’s a fun game while being pretty good exercise.”

Saturday teams were seeded according to beginner, intermediate and advanced levels.

“People came from pretty far away, so we want to give them as many matches as possible,” Okada said. “About 30 people came from Billings and we had people from Buffalo, Laramie, Sheridan and Lander.”

The sport is for people of all ages and skill levels, and courts are springing up in communities all over the country as pickleball continues to grow in popularity.

“There were two guys from Laramie. They were younger and one of the guys just started playing in October,” Okada said. “They were so good. They were quick and fast. I think one was a college tennis player. They were fun to watch.”

Everyone is encouraged to hone their skills for next year’s tournament, which is expected to be bigger than this year’s if the trend continues.

“This year was the biggest one we have ever had,” Okada said. “It’s just a fun sport and the tournament just keeps getting bigger.”