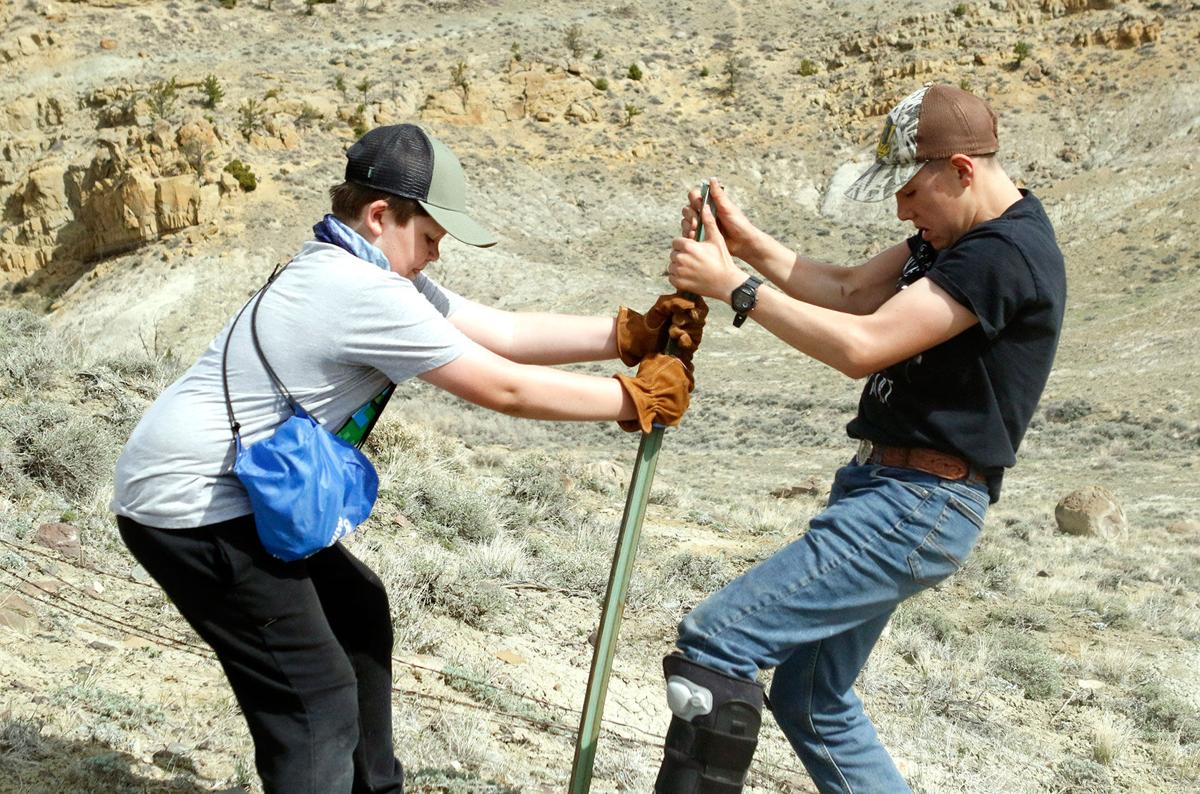 Jackson Amick (left) and Andrew Legler work to remove a metal t-post during the Absaroka Fence Initiative’s Four Bear Fence Tear on May 1. 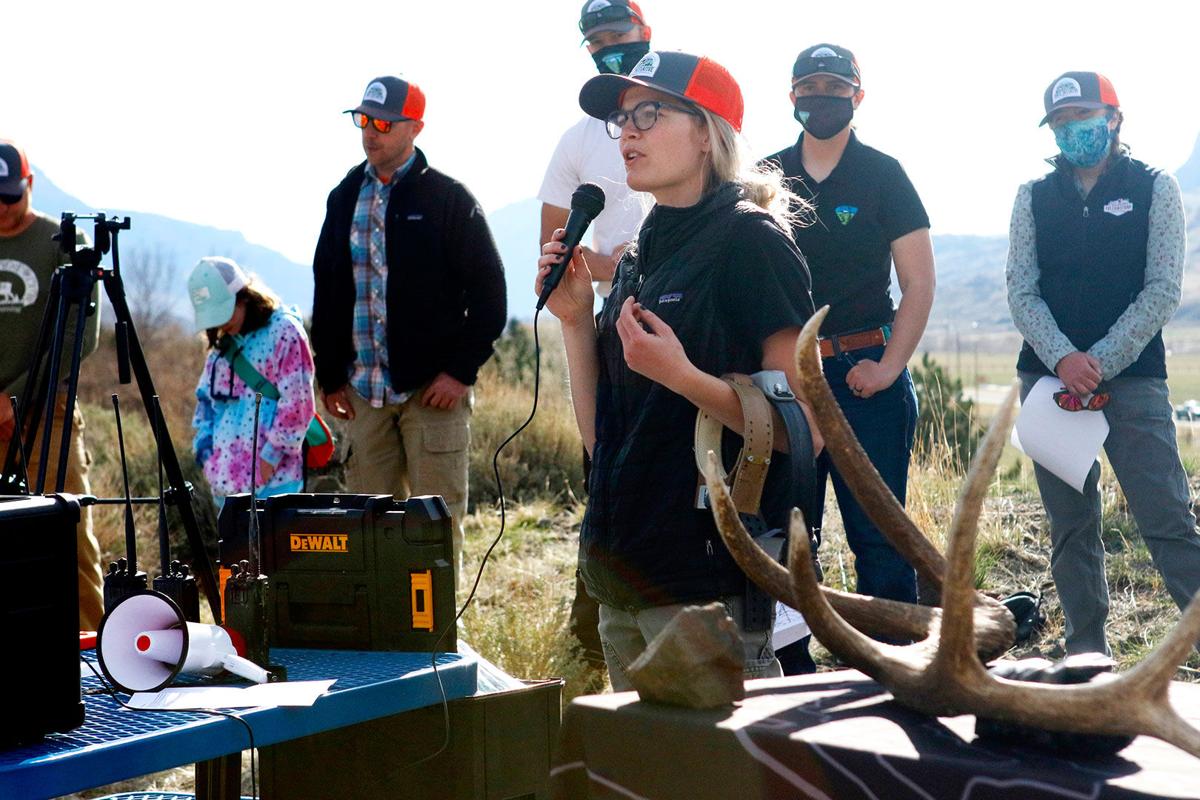 Emily Reed of the Wyoming Migration Initiative (front) speaks to the audience as Cory Williams (from left), Rick Tryder, Alicia Hummel and Jenny DeSarro, who also assisted, look on.

Jackson Amick (left) and Andrew Legler work to remove a metal t-post during the Absaroka Fence Initiative’s Four Bear Fence Tear on May 1.

Emily Reed of the Wyoming Migration Initiative (front) speaks to the audience as Cory Williams (from left), Rick Tryder, Alicia Hummel and Jenny DeSarro, who also assisted, look on.

Not only does it take a village to raise a child but it also takes a community to manage a habitat.

On May 1 roughly 80 volunteers worked on the North Fork to help improve habitat as part of the nonprofit Absaroka Fence Initiative’s Four Bear Fence Tear. It was the first public event for the recently formed collaborative group, made up of representatives from groups including the BLM, Greater Yellowstone Coalition, Shoshone National Forest, Wyoming Wildlife Federation, Game and Fish, The Nature Conservancy, Wyoming Migration Initiative and The WYldlife Fund.

“This is fantastic, this is better than we could have hoped for honestly,” said Kristie Salzmann, public affairs officer for the Shoshone National Forest.

Abby Scott, Northwest Wyoming program director for The Nature Conservancy, said the Fence Initiative grew out of a shared purpose, making it only logical for conservation groups to come together and pool resources.

In addition to members of these organizations and the general public, about a dozen local Girl Scout, Cub Scout and Boy Scout members also lent a hand, pulling out metal and wood fence posts and cutting barbed wire.

“Whether we’re teaching it to them or not, you’re seeing teamwork, you’re seeing leadership skills start to develop,” Boy Scout troop leader Todd Legler said. “They’re learning what it’s like to be out in the woods.

“It’s those little educational moments that you can’t measure with a curriculum.”

The purpose of the Fence Initiative is to remove outdated and unused fencing that is intruding on migratory wildlife corridors.

About four miles of fencing and 4,000 pounds of old wire and unusable t-posts were removed and transported for recycling from the north side of US 14-16-20 West and from a small section of land on private property bordering BLM south of the highway and near the Four Bear Trailhead. Alicia Hummel, a rangeland specialist with the BLM, said funds from the recycled materials will go towards future projects of the Fence Initiative.

The fences were previously in place for BLM cattle grazing leases occupying the land that are no longer active.

With a boot on his foot and crutches under his arms, Cody middle schooler Andrew Legler, 14, said he was driven from his couch and inspired to help because he was “bored out of (his) mind” after becoming house-bound from a recent ATV accident.

But more importantly, he expressed a deeper motivation founded on his love for hunting.

“The more animals that get caught up in this (fence) and get hurt, the worse it’s going to be for hunters,” he said.

Since his mobility was limited, Andrew Lelger stepped into more of a managerial role, directing his fellow scouts on tasks and techniques. But he couldn’t resist helping Jackson Amick, 10, pull out one particularly stubborn post. More than 10 minutes of tug-of-war later, and with some help from their troop leader, the team got it dislodged.

Legler’s troop already got a lesson on wildlife conservation when Tony Mong, a Game and Fish wildlife biologist and a member of the Fence Initiative, gave them a migration presentation earlier this year.

Conservation is one of the components that make up the Boy Scout merit badge for fish and wildlife management.

Ashlee Lundvall, a Powell resident and a Wyoming Game and Fish Commissioner, said imparting an appreciation for managing wildlife to her 10-year-old daughter Addison Lundvall is a top priority for her.

“She’s the next generation coming up and if we don’t teach them young, we’re going to have a whole generation coming up, they may love wildlife, but they don’t know how to take care of it and manage it and maintain it,” Ashlee Lundvall said. “This is something that should literally reach across the fence and get everybody on board.”

Working side-by-side on one section of fencing, Lundvall offered her daughter that if she could untangle a piece of fence wire, she could pull it out from the fence post for her. Her daughter had bigger aspirations.

“Can I pop it?” Addison Lundvall asked her mother. “I want to do it all.”

The two worked through it and Addison cut through the metal.

Fencing can trap animals like deer and elk, leading to their injury and demise. Fences in disrepair can even tangle up animals as large as horses, becoming the “ultimate force field,” Girl Scout Troop 1250 leader Laura Burkhardt said.

She and her daughter Madison saw the downfall of these barriers firsthand one day while cross country skiing. The two came across a dead deer that had gotten stuck in a fence near the Buffalo Bill Reservoir.

Cory Williams of the Trout Creek Ranch said even if they don’t get stuck in a fence, the barrier can redirect migratory paths into unwanted locations like high-traffic roads.

“If it’s not needed anymore on the landscape, let’s clean it up,” Williams said. “It’s just like picking trash up along a highway.”

As new homes are built and vehicle traffic increases, it will be more and more critical that the public is aware of wildlife stressors like these.

“So if we can remove one of those by making a fence for animals to cross that’s going to help the population overall,” Scott said.

G&F uses GPS collars to track the migration paths many mule deer and elk take that frequent this area. By following this GPS technology, Emily Reed, a research scientist with the Wyoming Migration Initiative, said biologists can map out precise migratory routes that lead from winter to summer ranges.

“They navigate mountain ranges, they wade rivers and then they have to navigate a footprint of fences,” Reed said. “The work we’re doing will hopefully save animals a little bit of energy so they can survive the winter and continue their migrations.”

After starting with a short wire removal near the trailhead parking lot, Luke, Taya and Beau Schatz worked their way up the hillside to haul out wire and remove fence posts, a task that included a steep climb on semi-loose footing, under a cloudless sky and hot temperatures.

“There were hills and it was rough,” Luke Schatz “It was sort of hard to breathe and it was hot.”

His dad Cody Schatz wouldn’t hear anything of it.

“It’s harder than when you sit on the couch, I’m sure,” he said with a chuckle.