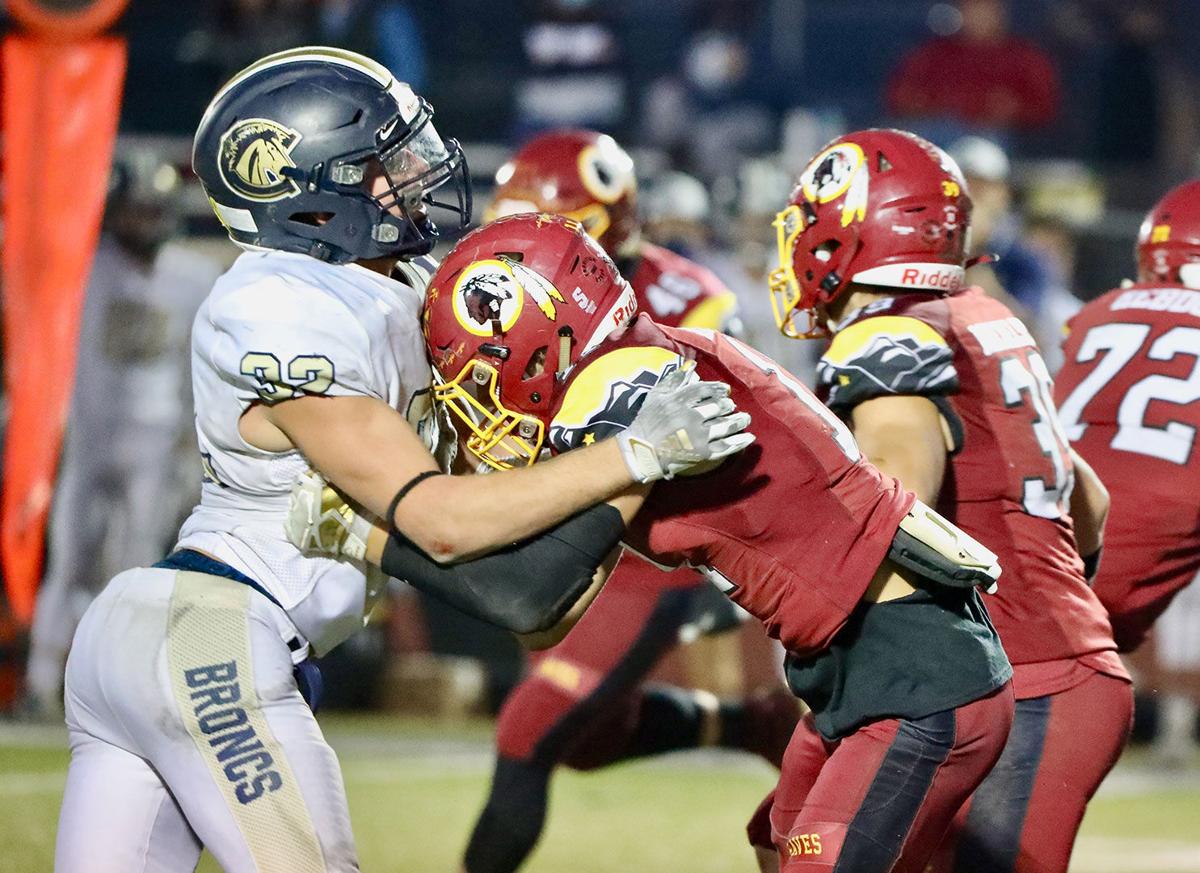 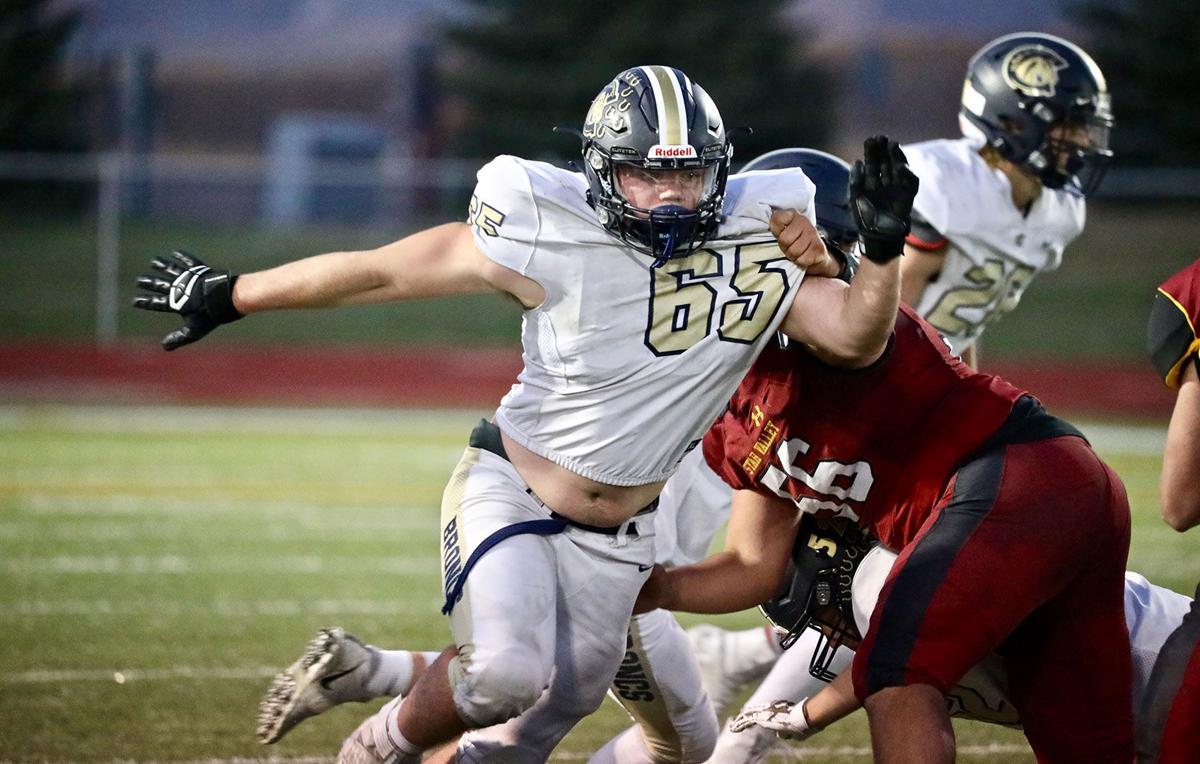 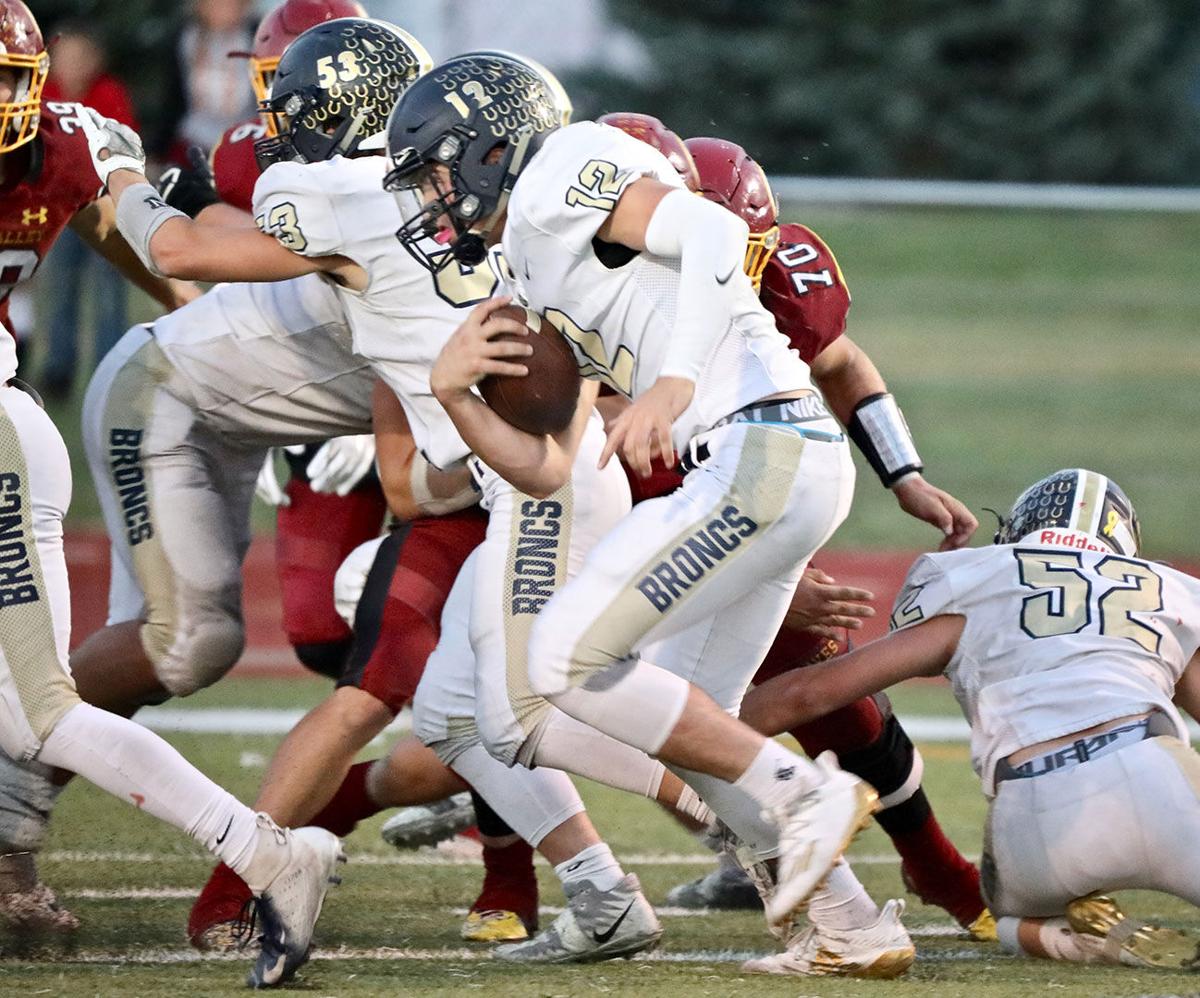 The Cody football team is no longer undefeated.

After trailing 21-0 in the third quarter, Cody (5-1) staged a comeback with a Caleb Pryor touchdown late in the fourth to make it a one-touchdown game, but it would not be enough. The Broncs got the ball back with 56 seconds remaining with a chance to tie or win but could only bring the ball to their own 35-yard line before time expired.

“I thought we did a good job of clawing back, but you’ve got to be able to play four quarters in football,” coach Matt McFadden said.

The Broncs struggled to find offensive momentum for most of the night against a bigger Braves team. Not helping matters was the fact Cody had five starters out entering the game and another, Chaz Cowie, got injured in the first half.

“Due to our lack of depth for this game we had some kids that literally played every snap,” McFadden said. “Just some amazing efforts of guys playing ironman football.”

One of the players who saw more time was Wilkins Radakovich.

“It felt great. I’m just glad that the coaches gave me a chance to show them what I can do,” he said.

Star Valley (2-5) scored first on a 1-yard JaAren Smith rush after completing a 34-yard reception on the previous play.

At 10:08 in the second, Jackson Gail fumbled after making a reception to return Star Valley the ball.

“We just weren’t as locked in as we should be,” Gail said.

Lane Oesch scored on the ensuing drive on a 3-yard pitch at 7:53 to give the Braves a 14-0 lead after the PAT, completing a six play, 50-yard drive.

Jack Schroeder returned the ensuing kickoff 37 yards to set the Broncs up at their 47. But Cody would only make it to the Star Valley 32-yard line before turning it over on downs.

Cody got one more chance before the half, but ended up punting it away.

Star Valley finished the first half with 190 yards while the Broncs only had 56.

Remy Broussard led the Broncs at the half with 15 all-purpose yards.

The Broncs finally got on the scoreboard with 1 second remaining in the third when Schroeder took a direct snap for a 2-yard rushing touchdown. Star Valley made the Broncs earn every play on the 12 play, 80-yard drive. It was Cody’s only possession of the quarter.

The Broncs then forced a Braves fourth-and-downs and took over the ball again with 10:32 remaining. But this drive would once again fall short after only one first down.

The Broncs defense then got a big stop and Pryor scored on a 1-yard keeper with 2:09 left to bring Cody within one score.

Cody got one more chance with less than a minute remaining.

After getting a first down on a fourth-and-1 Gail reception, it would be all the Broncs could muster as time expired three plays later without any serious threat down field.

Talich led the Broncs with 93 yards on 15 carries. Gail had 5 receptions for 39 yards.

“It’s just a matter of running the same amount of steps every time. They can’t cover you forever,” Gail said.

Gail said although he considers himself more an offensive threat, he still loves playing defense and “just getting to hit people.”

Star Valley finished with 275 total yards while Cody had 198.

“They won the war in the trenches,” McFadden said.

Even though it was not the final result the team was looking for, there were a few positives that could be taken from the game. The Broncs outscored and outgained Star Valley in the second half and held the Braves scoreless for the entire fourth and last 16:49 of play. A future meeting between the two squads may go differently.

The Broncs did not get their first penalty of the night until 17.9 seconds remained, while Star Valley committed five infractions.

Gail said the Broncs may have become a little overconfident after their blowout win against Evanston the week prior.

“We needed somebody to put us in our place,” he said.

Cody will return home to play Green River (2-4) on Friday. McFadden and Gail said they will try to focus on what they did right in the second half in preparation for the Wolves.

“Just take a step back, review the rules and fundamentals, and focus on execution because that was really the only difference (between the halves),” McFadden said.