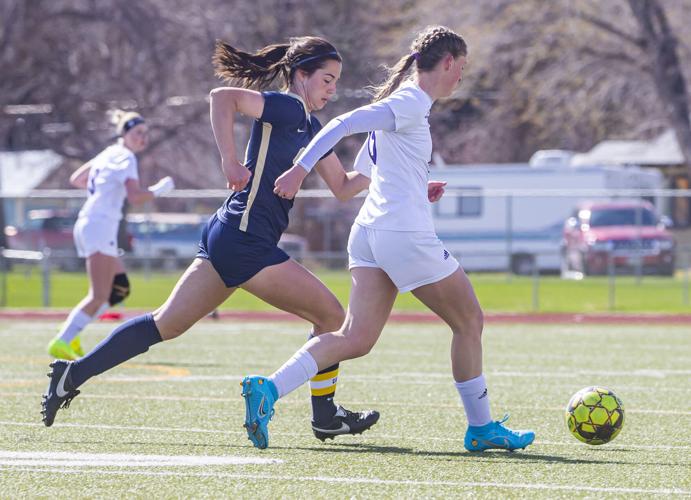 Autumn Wilson chases the ball against Mountain View on Saturday, May 7, 2022. 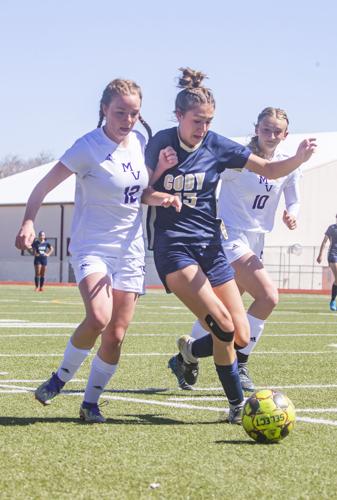 Kennedi Niemann goes for the ball against Mountain View on Saturday, May 7, 2022. 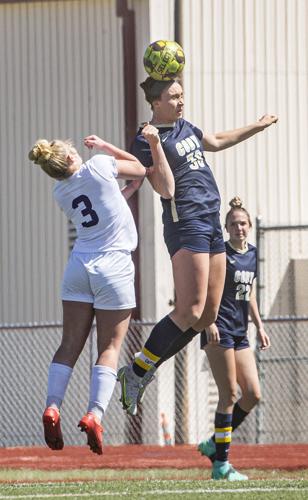 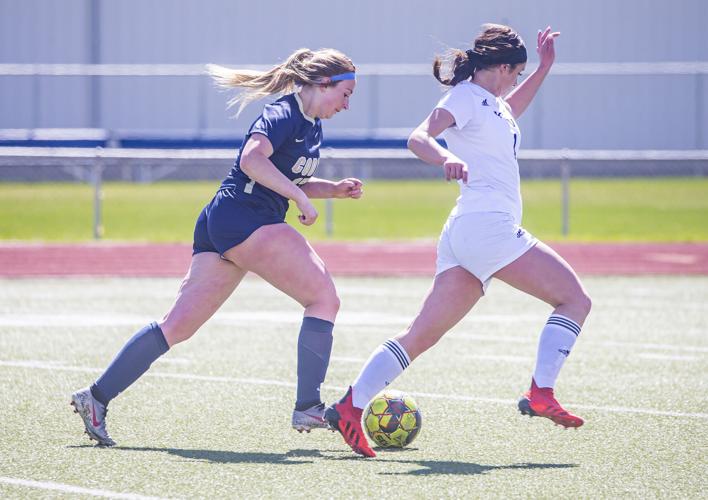 Gillian Growney steals the ball against Mountain View on Saturday, May 7, 2022. 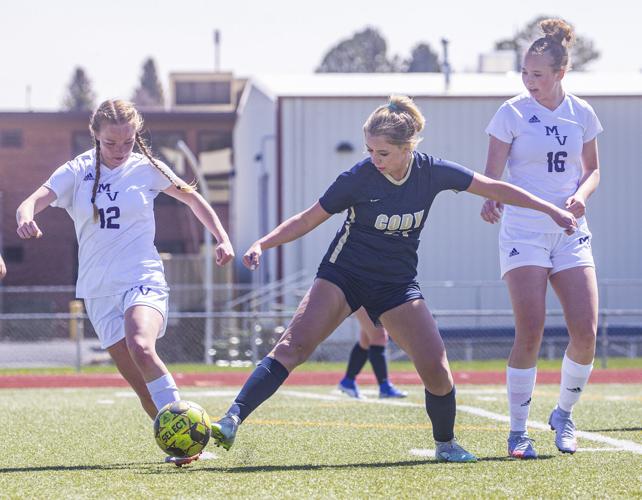 Miah McCarten goes for the ball against Mountain View on Saturday, May 7, 2022.

Autumn Wilson chases the ball against Mountain View on Saturday, May 7, 2022.

Kennedi Niemann goes for the ball against Mountain View on Saturday, May 7, 2022.

Gillian Growney steals the ball against Mountain View on Saturday, May 7, 2022.

Miah McCarten goes for the ball against Mountain View on Saturday, May 7, 2022.

The Cody girls had a busy week with three games, something that doesn’t normally happen until the state tournament.

The Fillies used it to their advantage as tune up for the post season, defeating Lander, Lyman and Mountain View.

“We know how it feels after three games in a row, which I think is good preparation for state games,” senior Autumn Wilson said. “We know what it takes to really push us to succeed.”

“Personally, I’m exhausted,” junior Kennedi Niemann added. “My legs are dead, but I think we did a good job of pushing through that to get the wins.”

“We played great as a team,” coach Marian Miears said. “Everyone stepped up to the challenge and did their jobs.”

Lander took the lead on a corner kick in the 12th minute, but it was short-lived, as a minute later,  Aspen Kalkowski took a shot from the right side that went over the goalie’s head.

“After Lander scored we always use the next two minutes after either team scores to either push our momentum or stop theirs,” senior Tayleigh Hopkin said. “And that’s what we did. In the next minute Aspen put in a goal.”

Natalie Wenke’s goal in the 23rd minute on a through ball gave Cody the 2-1 lead at half.

The Fillies added a third in the 74th with a goal from Wilson. Ally Boysen passed up to Wilson, who dribbled around a defender for a shot in the right side of the net.

“Defensively we worked as a unit, to pressure to shut down their forwards and cover for each other,” Hopkin said. “This game we were more mentally prepared, and had a lot of momentum from the start. It felt rewarding to beat them on our turf and to come and face them again and beat them on their turf.”

Hattie Robbins crossed to Wenke in the third minute for a goal and two minutes later Wilson crossed to Robbins to make it 2-0.

Wilson scored one herself in the 17th when she worked her way through the defense and tapped it in the right corner from the left side.

Two minutes later Niemann fed a through ball to Boysen whose shot from the corner made it 4-0.

In the 23rd, Kalkowski crossed inside to Niemann for the goal.

Cody’s final score of the half came in the 32nd minute when Wenke chipped the ball past the goalie on an assist from Manon Desquesses to make it 6-0.

“The first half was a little bit rough,” junior Gillian Growney said despite the big lead. “We were moving kind of slow and our possession wasn’t there. We are having a hard time controlling it. We really fixed that in the second half.”

In the second half, the Fillies focused on their passing and were instructed to pass five times before someone took a shot.

“I shouldn’t have to put on the parameters of five passes,” Miears said. “We learned when we make passes we have more possession and wear out the other team.”

In the 49th, Wenke got her third goal of the game when Wilson passed to her right in front of the net.

Cody earned a PK in the 51st minute and had defender Growney take the shot.

“We do PKs all the time in practice,” she said. “We make jokes on the defensive line about who’s going to get the goal this game because Reece (Niemann) has some goals. It was really fun.”

The Fillies final goal came in the 55th when Boysen brought the ball up the field for a shot 18 yards out.

“We had really good ball movement, which I think opened more opportunities for us to score,” junior Miah McCarten said. “And so I think if we play possession like we did, we will be really well set for state.”

Many of Cody’s JV got in during the game.

“I think it gives them some more experience,” McCarten said. “That’ll help them in the future because it’s faster moving, so they’ll be more adapt when they come up.”

The Eagles didn’t have many opportunities in the game, but managed to score on a corner kick in the 59th.

Saturday the Fillies had to fight both fatigue and the wind in a 2-0 victory over No. 4 Mountain View.

“It was not one of our best games,” Miears said. “The finishing wasn’t there because we were tired, but we had good possession. They should be proud of themselves, a win’s a win.”

Cody controlled the momentum for the majority of the game and had several solid shot opportunities, but struggled with finishing.

After multiple attempts early, the Fillies got on the board when Wilson scored in the 23rd minute after breaking through the defense for a one-on-one chance.

The Fillies had the wind with them in the first half, but it made things difficult as many passes rolled too far out of reach.

“It was tough just because we’re used to playing through balls a lot,” Niemann said. “And the wind was just carrying it, so I think we had to adjust to that and we did a better job in the second.”

In the second half, against the wind the Fillies had more success controlling the ball.

Early in the half, Kalkowski crossed a perfect ball to Wilson at the post, her header was slightly off and went out of bounds.

“In the second half we held good structure and made good passes,” Wilson said. “I was definitely frustrated (on some shots that) just didn’t happen today, but that’s okay.”

Cody scored its second goal in the 53rd when Kennedi Niemann finished a corner kick from Boysen.

“I knew Ally had a big kick so I figured I should go back post,” Niemann said. “I was just in the right spot at the right time.”

The Fillies continued to create chances and had several good ones, but the shots either went out of bounds or we re stopped by the goalie.

Cody hosts Buffalo on Friday for its final home game at 3 p.m. Saturday it travels to Worland.