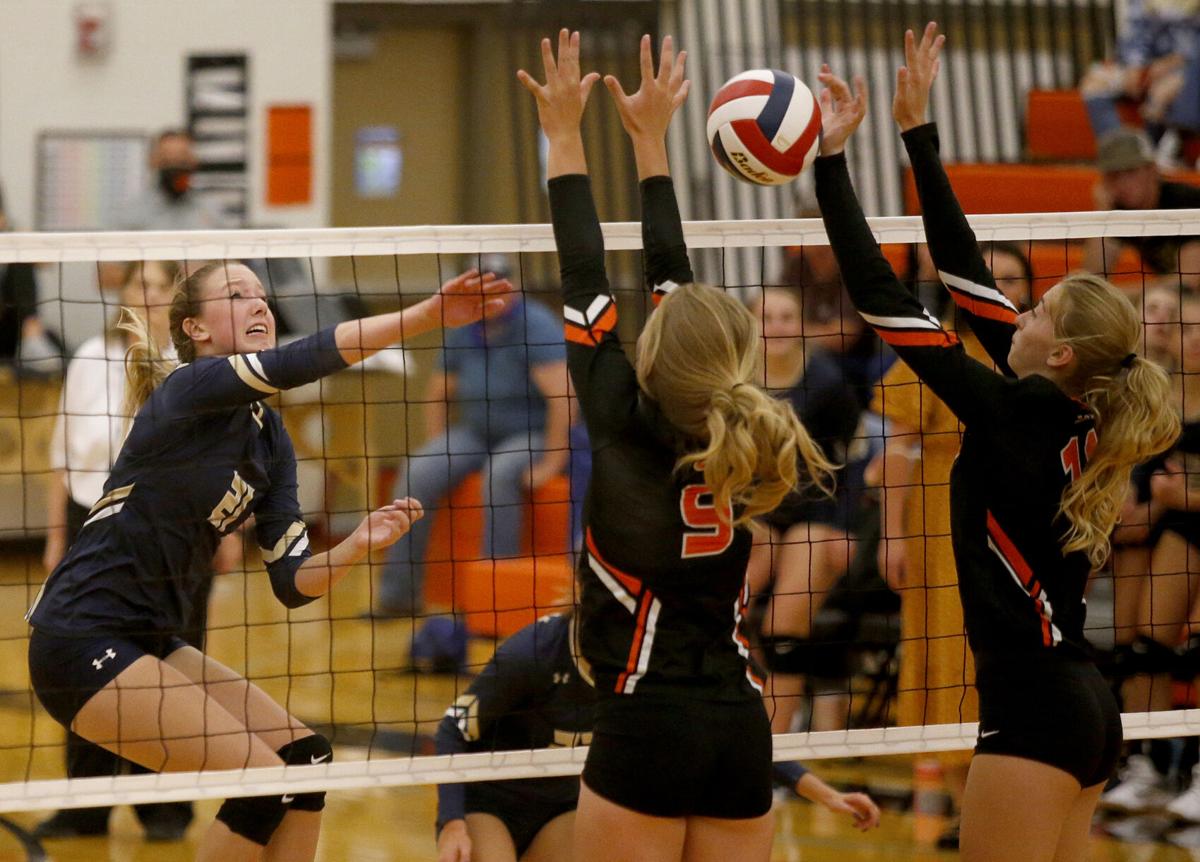 Reece Niemann gets a kill. 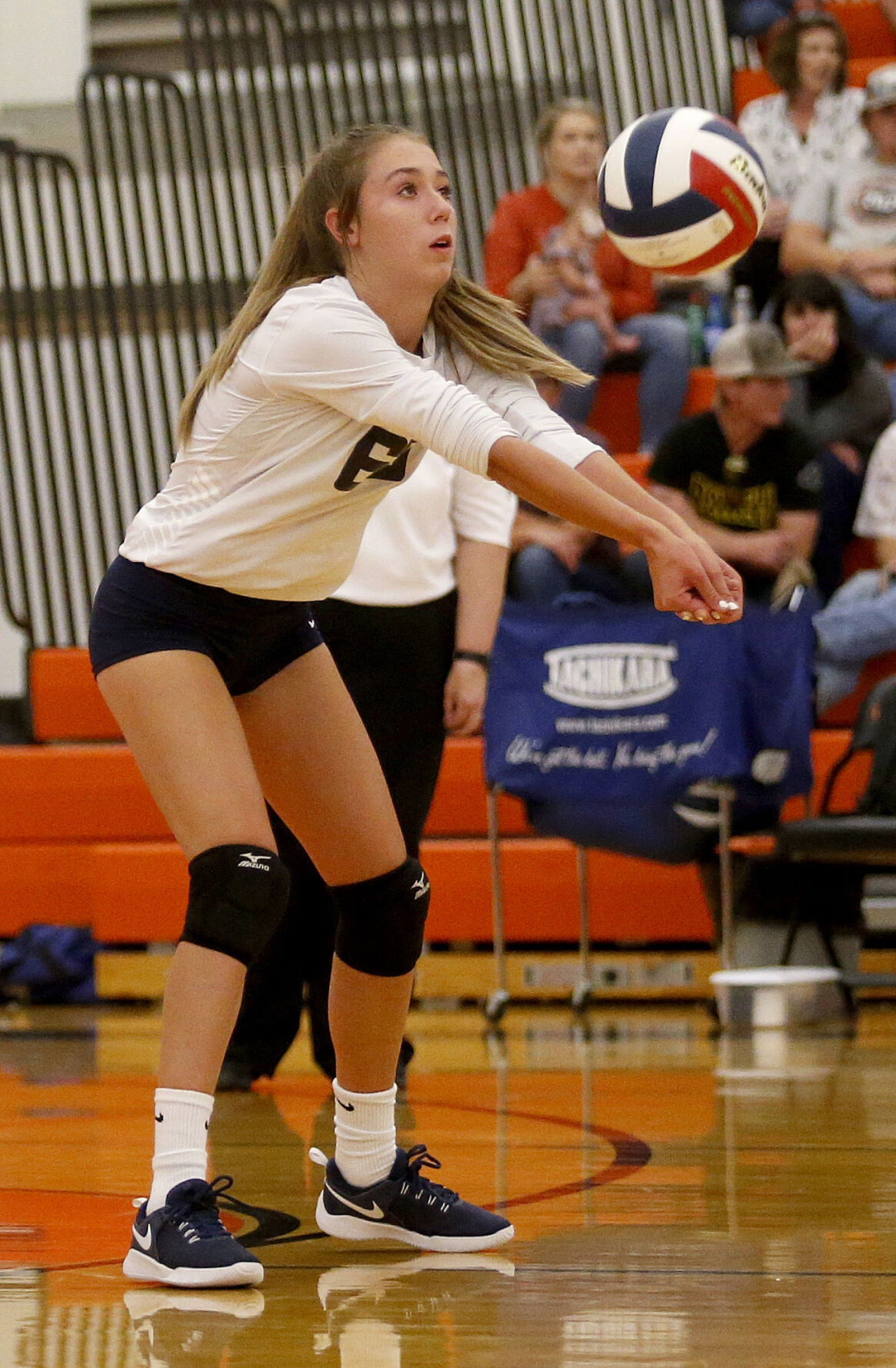 Grace Shaffer sets during the game. 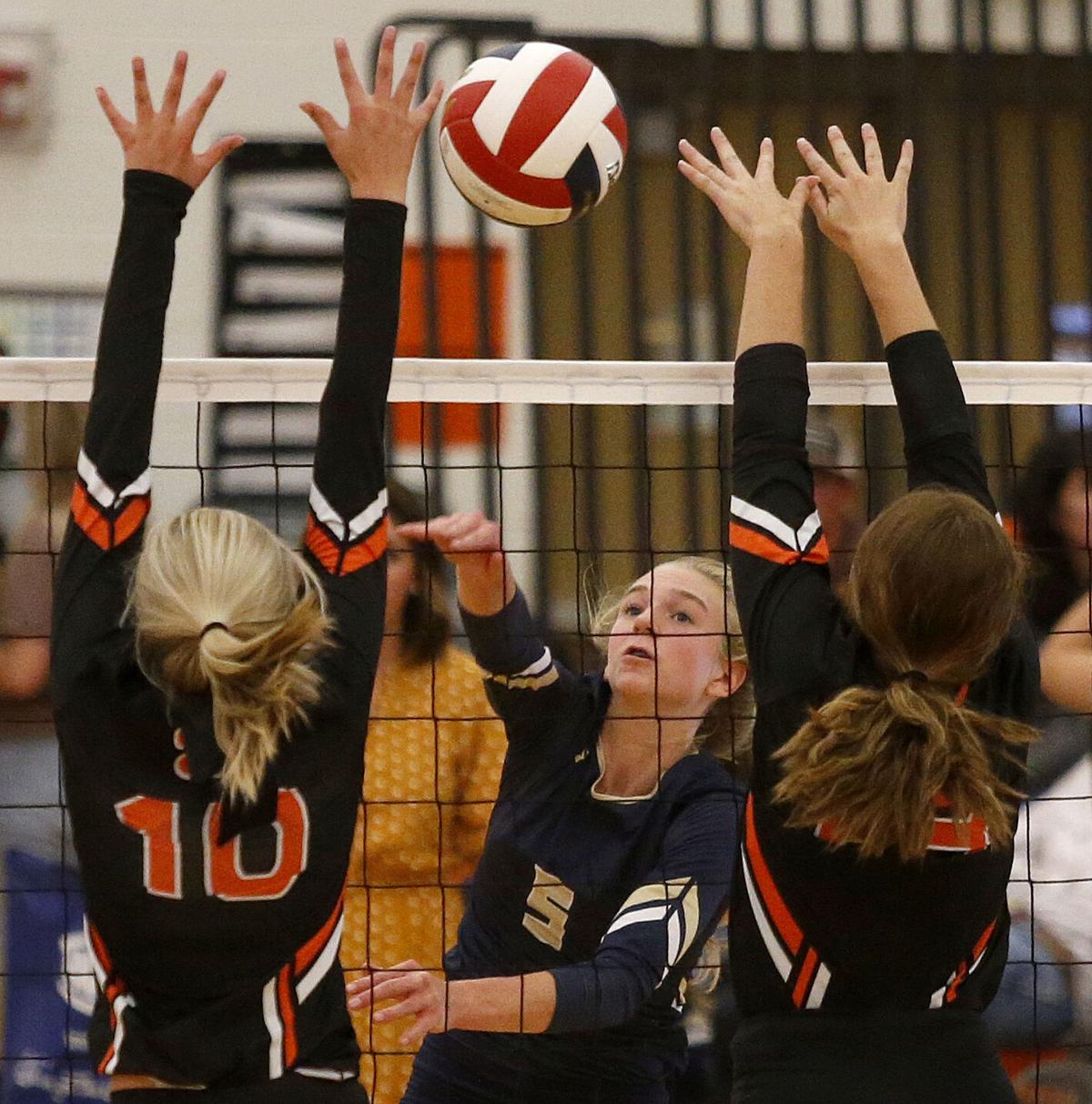 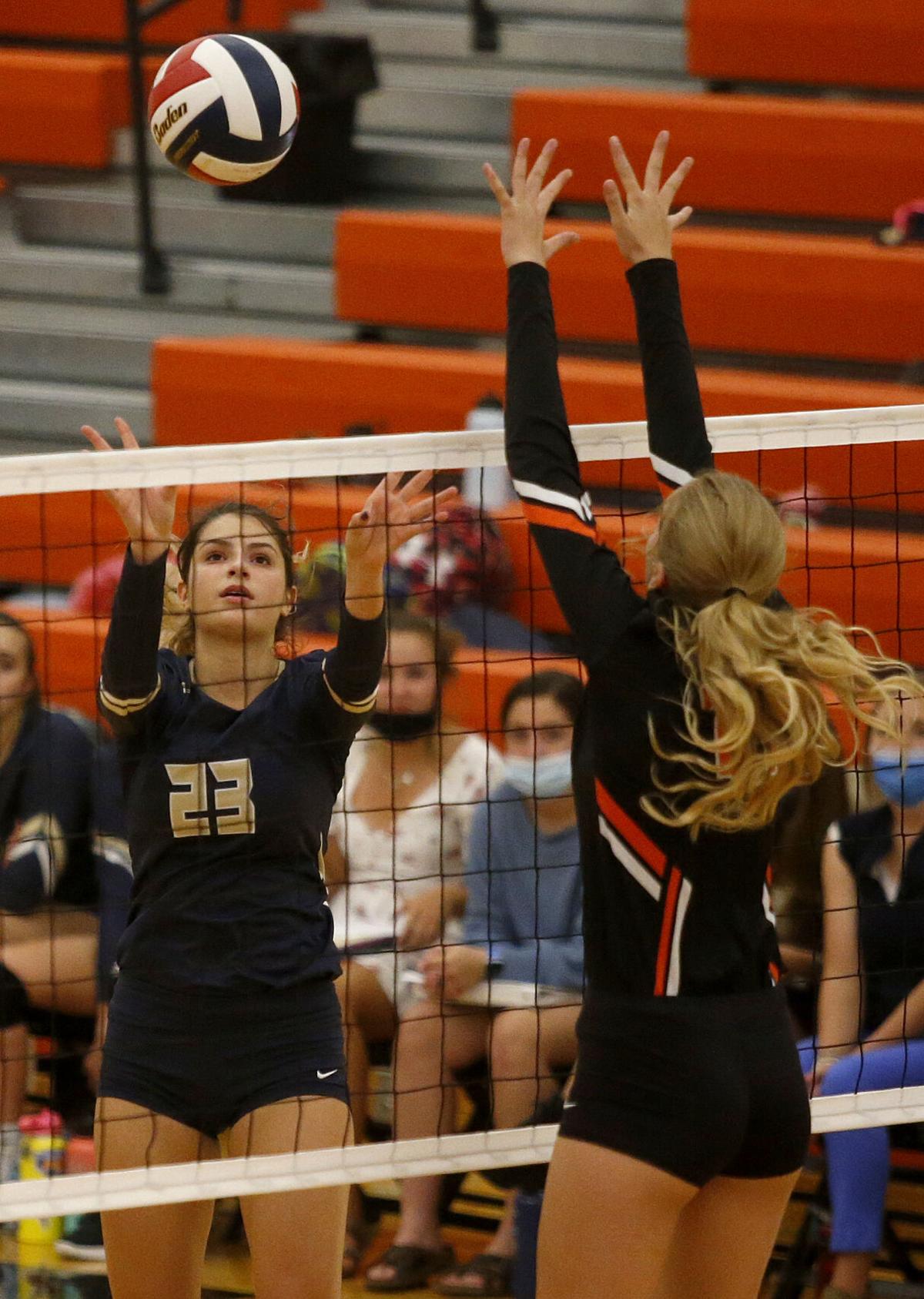 Brittan Bower tips the ball over the net. 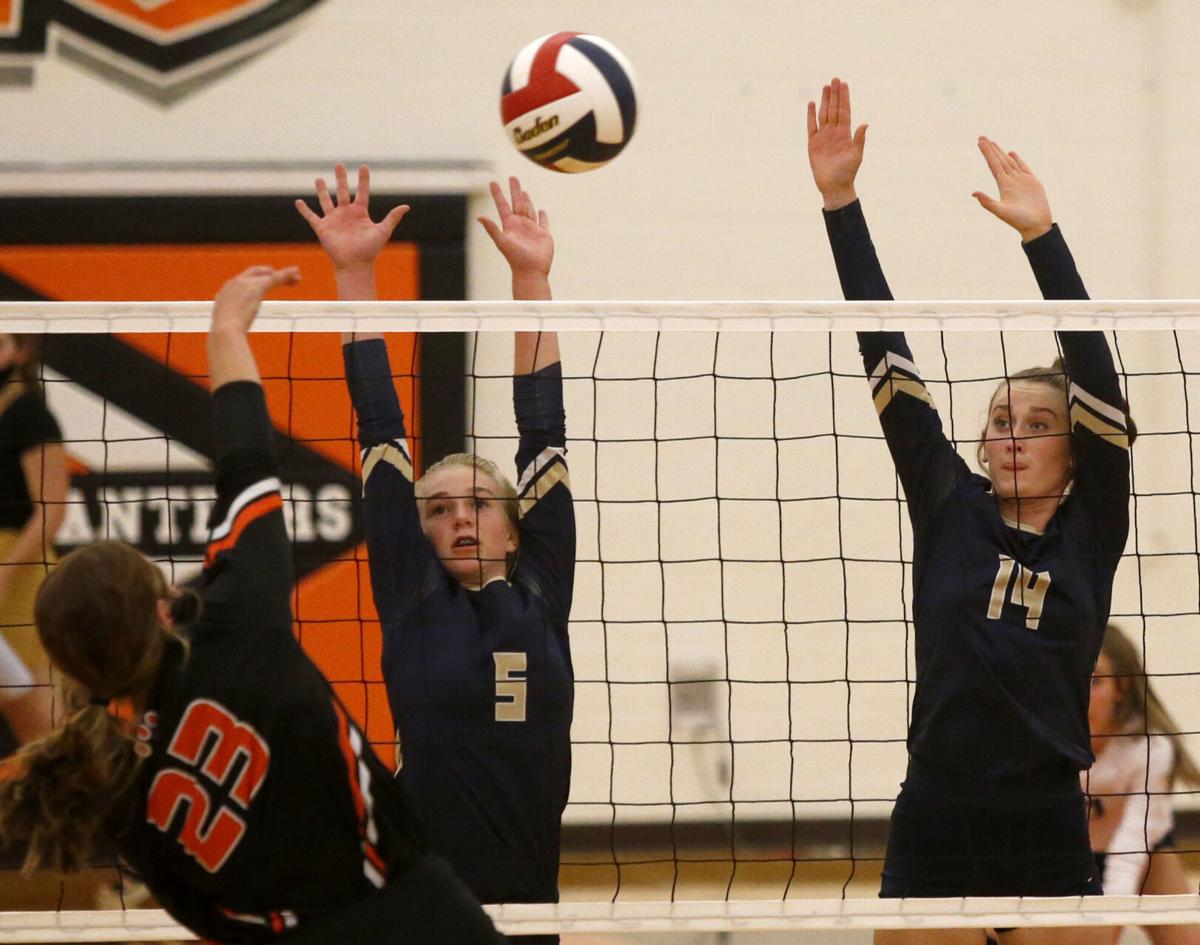 Molly Hays and Lake Harrison try for a block.

Reece Niemann gets a kill.

Grace Shaffer sets during the game.

Brittan Bower tips the ball over the net.

Molly Hays and Lake Harrison try for a block.

In front of rowdy fans, the Cody volleyball team swept Powell 3-0 on Thursday in Powell.

“It’s so much fun to play in front of the crowd,” Reece Niemann said. “It keeps our energy up. They’re our rivals and it’s always fun to play them. It’s awesome we beat them.”

With the victory, the Fillies improved to 2-1 on the season.

“I thought they were steady and did a good job of not getting too up or down,” coach Stephanie Birch said. “Defensively we were much better than last week and our hitters were a lot more aggressive today.”

Cody jumped out to a 6-1 lead in game one, taking advantage of a couple of Powell errors, a kill by Molly Hays and an ace by Kennedi Niemann. The Lady Panthers pulled within two at 8-6 but didn’t get any closer.

The Fillies outscored Powell 10-3 in a run that included a block by Reece, and kills by Autumn Wilson and Brittan Bower. Cody continued to pull away, setting up game point on a kill by Bower and winning the game 25-15 on a kill by Wilson.

“We were swinging hard,” Reece said. “On defense we were in the right spot and everyone was playing with energy and constantly talking.”

The second set was closer early on with four ties, but kills by Hays and Reece gave Cody an 8-6 lead. The slight advantage remained through the middle of the game, but the Fillies began to pull away. Cody took advantage of unforced errors by the Lady Panthers, while continuing to be aggressive on offense. Up 24-15, Cody had a missed serve, but Powell turned around and did the same thing to give the Fillies a 25-16 win.

“In game two, we had about five missed serves but I’m just glad most went long,” Birch said. “I was giving them zones and trying to give them spots to hit so I was OK with some misses.”

As they did in their match against Lander on Saturday, the Fillies had a bit of a letdown in the third game against the Panthers. Unlike that match, which they went on to lose 3-2, Cody took care of business.

Cody trailed through the early part of the game. Down 12-9, a kill by Wilson and Powell errors tied the game. The Fillies took their first lead since the start of the game and went up 14-12.

“We let a couple of balls drop and had a lack of communication,” Reece said. “We were a little down but we got back up.”

Cody and Powell traded points through the middle of the game, but the Fillies took a 20-17 lead on kills by Grace Shaffer and Lake Harrison. Powell didn’t go away though, tying the game at 21. However, a net serve and hitting error by the Lady Panthers made it 23-21. A kill by Wilson set up game point and another Powell error clinched the 25-21 win for Cody.

“We were down a little bit in the third game,” Birch said. “We did the same thing against Lander, but this time we made the choice to pick ourselves up.”