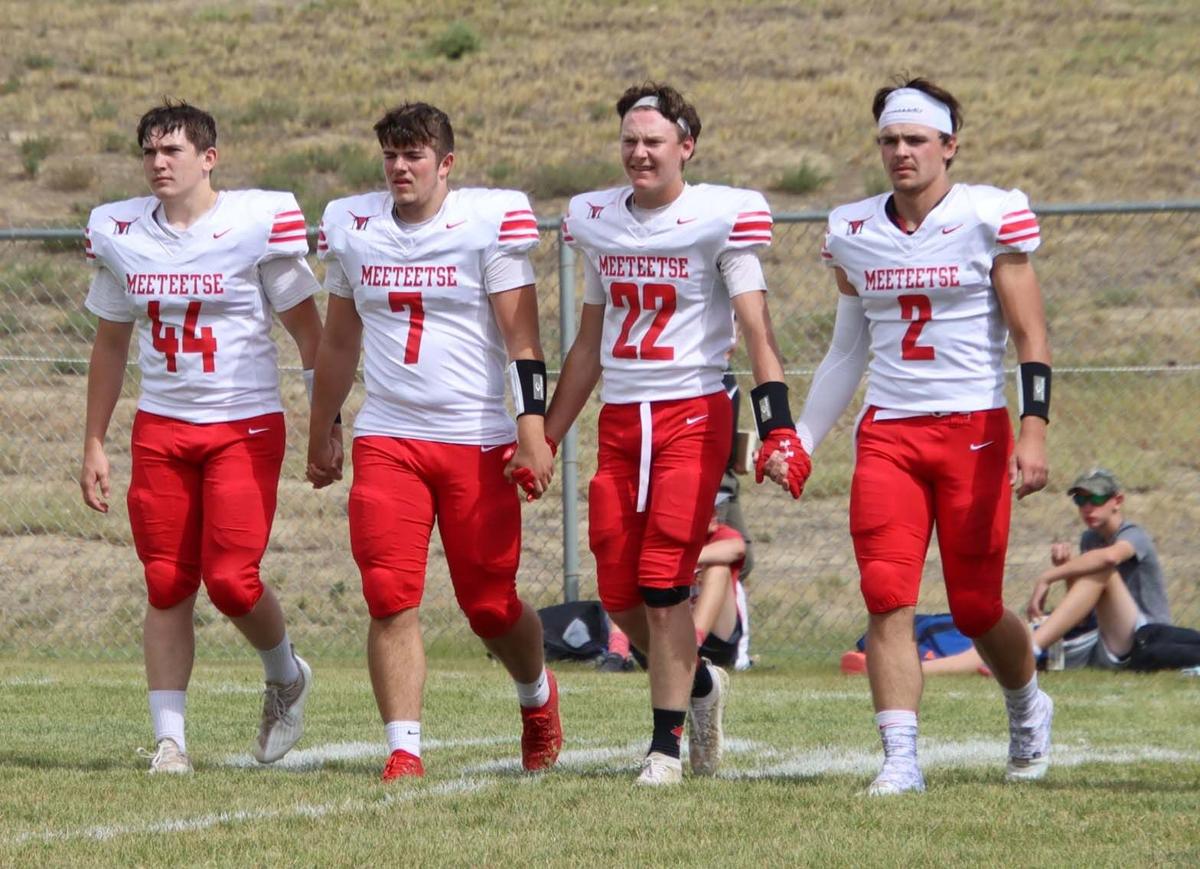 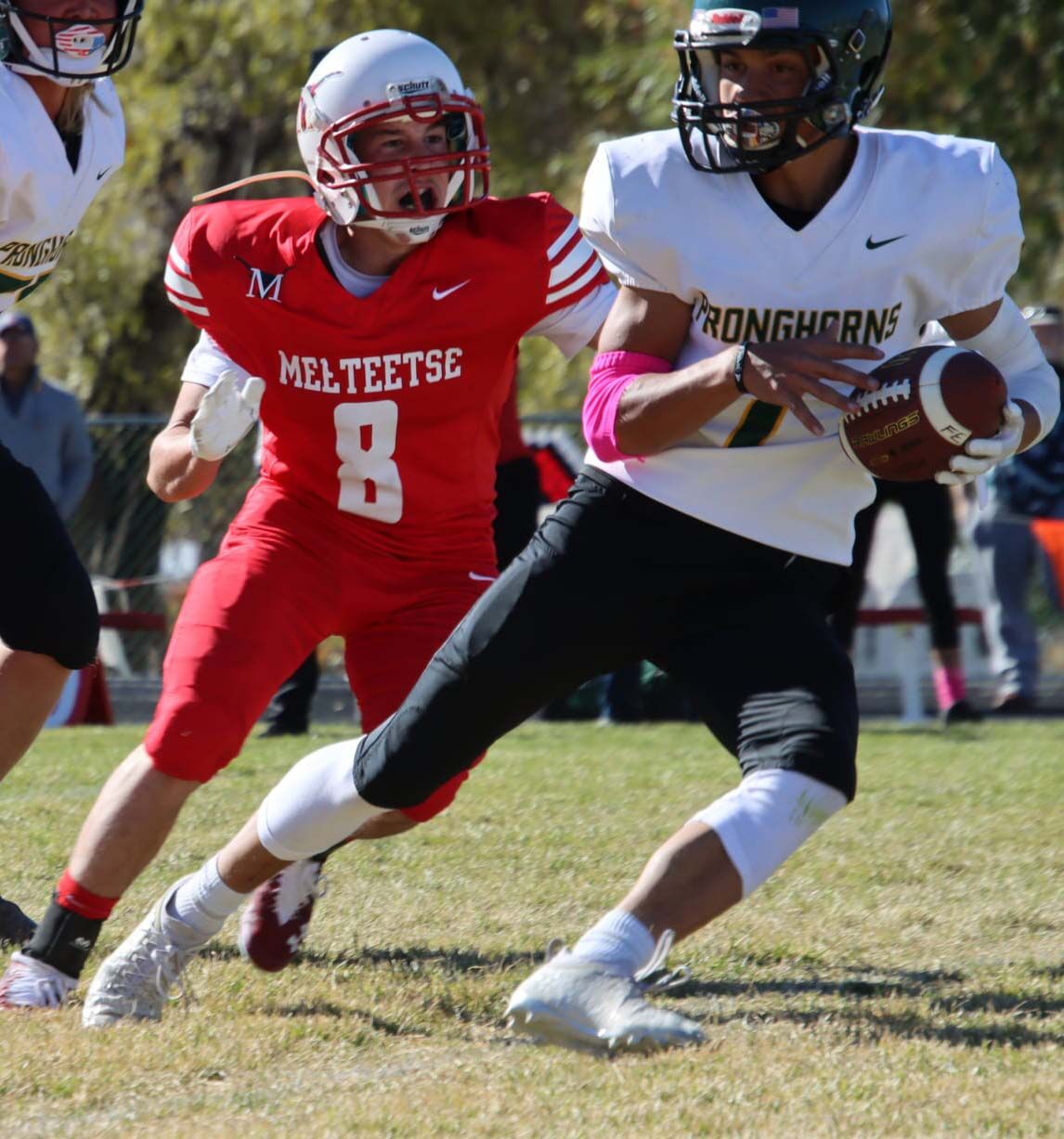 Joe Pina was named All-State as a sophomore for his defensive play.

Joe Pina was named All-State as a sophomore for his defensive play.

After multiple impressive performances on offense, defense and special teams for the Meeteetse Longhorns football team, the rest of the state took notice and honored five ’Horns players with All-Conference recognition and four with All-State honors.

Jonathan Blessing joined those four on the All-Conference team.

He was also named the lone Offensive Player of the Year by the Wyoming Coaches Association.

This is the second consecutive season Erickson and Bennett have landed on the All-State team.

Erickson finished the season with the top three receiving games of the year, including a 12 catch, 257 yard performance in a win against Dubois that netted him three touchdowns.

He also posted three of the top five defensive performances in the state, the best a 19 tackle game against Little Snake River in the playoff semifinals. He finished that game with a fumble recovery and interception against the eventual state champions.

“Kalvin was third last year in the state in defensive points, and in the top 10 as a sophomore,” coach Zeb Hagen said. “He finally got the top spot. He’s just a kid that is always around the ball. He is a ball hawk, has good instincts and is a smart player.”

Erickson finished the year with 61 receptions for 1,177 yards and 17 touchdowns and led 6-man with 175 tackles and three interception returns for touchdowns.

He averaged over twice as many receiving yards per game as any other player in the conference.

Bennett started the year strong slinging the ball with 332 yards and four touchdowns against Bridger, Mont., in the ’Horns first game and never let up.

The senior averaged more than 100 yards per game than any other player in the conference in all-purpose yards.

“Dace has put in a lot of work,” Hagen said. “He is one of the best kids I’ve ever seen in the offseason as far as lifting, workouts and camps to try and make himself better and getting other kids to do those things with him.”

Whether it was kicking, throwing, running or making tackles, Ogden ended up making an impact all over the field for the Longhorns.

He was the leading kicker in the conference with 35 made extra points and drilled a 40 yard field goal in a 50-22 win over Farson-Eden.

Ogden averaged nearly 10 tackles per game and finished the season with 13 tackles for loss, two fumble recoveries and a pair of interceptions.

“Everyone knew he was a good kicker and could run and throw,” Hagen said. “But his ability at defensive end really helped us out. He got better as the season went on and grew more and more confident on the field.”

Sophomore Joe Pina finished ranked third in the conference defensively. He racked up 135 tackles, 13 tackles for loss and a pair of sacks while averaging 15 tackles per game.

“I think Joe’s play spoke for itself,” Hagen said. “It didn’t matter if he was the smallest guy in 6-man and a sophomore, he played like a senior and was just all over the place.”

Blessing’s impact was felt on both sides of the ball and his performances down the stretch was a big factor in the ’Horns late season success.

The senior was in the top 20 defensively with an average of nearly 10 tackles per game and finished the year with five tackles for loss, a fumble recovery and an interception.

He also hauled in 13 passes for 157 yards and a score and found the end zone twice on 14 rushing attempts.

“I think if we’d have won state he would have been an All-State player,” Hagen said. “He did all those intangible things and when he wasn’t on the field for us it was evident. He is just a great kid and he is really going to be missed.”